Every day during the summer months, Kamlawati Yadav wakes up at 6 am and walks half a kilometre to a house with a private borewell. “Getting water is the first thing I do,” Kamlawati says. “I carry one water container on my head and a second by hand.”

Once home she wakes her sons, who are asleep on their cots outside the house due to the summer heat.

She will have to make the trip again in the evening, carrying 72 litres on both journeys, to get the water her family of five needs.

“We have to get things done with four buckets of water per day,” she says as she moves the containers inside the house with the help of her daughter. 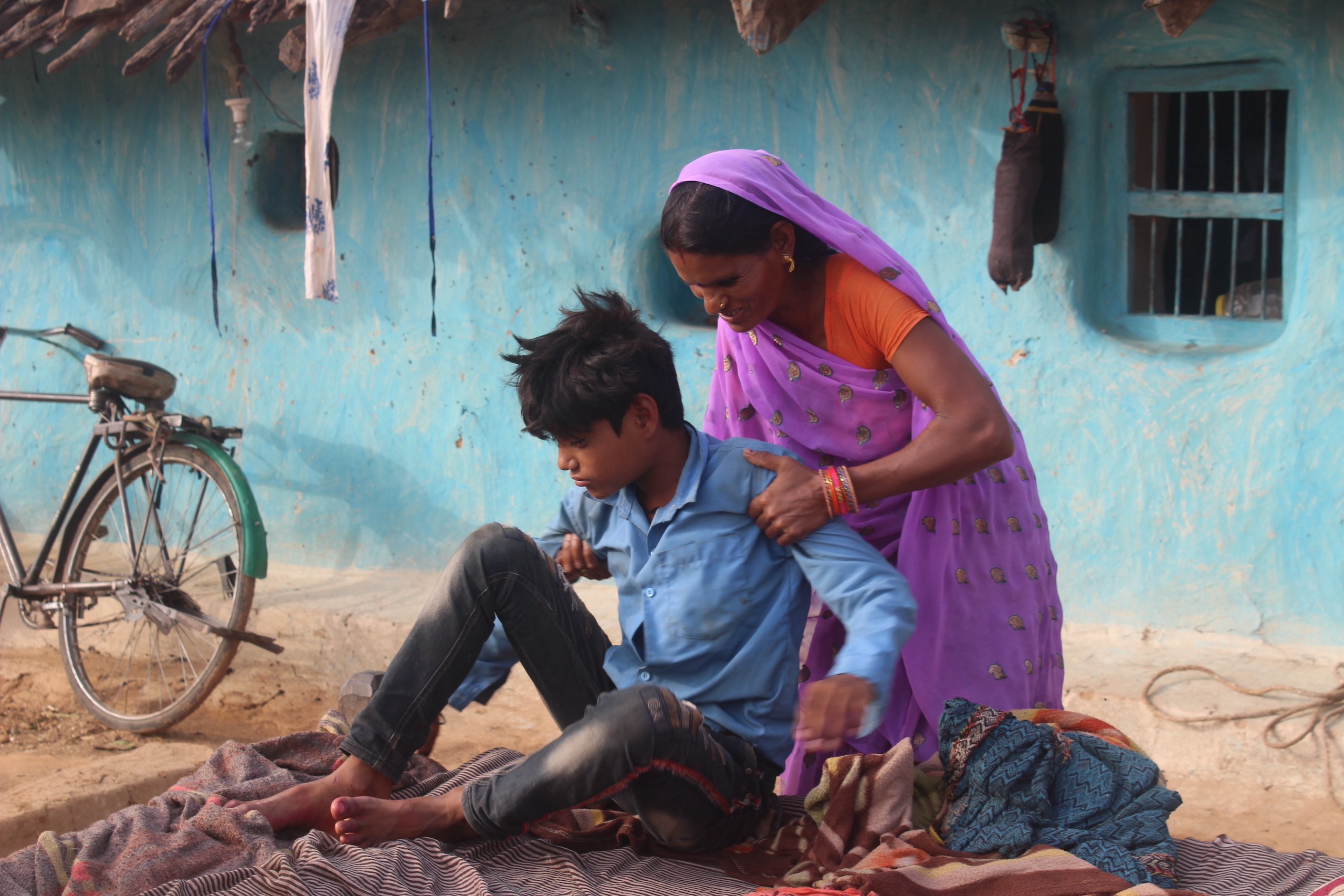 Kamlawati wakes up one of her sons, who has been sleeping outside the house where it is cooler (Image: Jigyasa Mishra)

When Kamlawati’s husband, Raghunandan Yadav, is not busy looking after the family’s livestock he accompanies her to the borewell, carrying the containers on his bicycle. Sometimes her sons help, but she is ultimately responsible for making sure the family has water.

The Yadav family live in Barua village in the Satna district of Bundelkhand – a hilly, drought-prone region in central India that straddles Madhya Pradesh and Uttar Pradesh states. More than 18 million people live in Bundelkhand.

In 2015, Anil Gupta, a division head at India’s National Institute of Disaster Management, wrote that in recent decades “Bundelkhand has become a synonym for drought, unemployment and perennial water stress.”

India’s Ministry of Housing and Urban Affairs recommends that in rural areas every person should have access to 55 litres of water a day.

Between Kamlawati’s family of five, her four buckets only provide about 29 litres per person per day – nearly half the recommended minimum.

There is limited data on water scarcity, particularly its impact on women, in Bundelkhand. Sunil Kurmar Srivastav is the Chitrakoot district coordinator for Abhiyan, an NGO that works on issues including water management and the empowerment of women in the districts of Banda and Chitrakoot. He says that his organisation has no reliable data, and none is available from the government.

But, he says, “as per my observation, Manikpur belt of Chitrakoot would have around 70% women affected [by] acute water shortage. In fact, any area in Bundelkhand with water scarcity would have 60-70% women bearing the brunt of the issue.” This is because the management of the home, in which water plays a key role, is considered to be women’s responsibility.

Shubhrant Kumar Shukla, the Chitrakoot district magistrate (the highest administrative official in the district), tells The Third Pole that the Patha area of Chitrakoot is particularly water-stressed. The area, which is comprised of 50-60 gram panchayats (the governing units at a village level), has rocky, dry terrain.

As climate change alters weather patterns, rainfall in Bundelkhand is also changing. Between 2013 and 2018, annual rainfall in the region fell by 60%.

Despite this, in 2020 geologists concluded that average rainfall in the region should be “sufficient”. Yet Bundelkhand is marked by water scarcity, due to “different environmental factors such as rocky surface, high temperature, fast runoff of water, lowered groundwater table, and deforestation of the upper slopes”, the researchers wrote.

Gunjan Mishra, an environmentalist based in Chitrakoot, highlights mining and rock type as contributing factors. Mining disrupts the pathways that let water percolate into underground aquifers. The rocky terrain adds to this problem, with rainwater becoming run-off and not recharging the groundwater.

The situation of underground water level has only deteriorated in Bundelkhand

“Lalitpur, Chitrakoot, Mahoba districts see no improvement in groundwater depletion [after the rains] because of the ongoing mining and hard rocks in the region. There are a few areas where farmers have built ponds [to store rainwater] but it helps increase the [groundwater] level only within a one-kilometre vicinity. So, we can say that the situation of underground water level has only deteriorated in the region,” he says.

Kamlawati’s family experiences this deterioration. Their village of Barua has a well and a hand pump, provided by the government. The villagers tell The Third Pole that both used to have water throughout the summer months, but that changed in 2009.

Now, between March and early April, Kamlawati can walk the 400 metres to the village hand pump. But “its water dries up before April ends and stays this way until August or September”, she says, leaving her family dependent on the goodwill of the household with a private borewell. 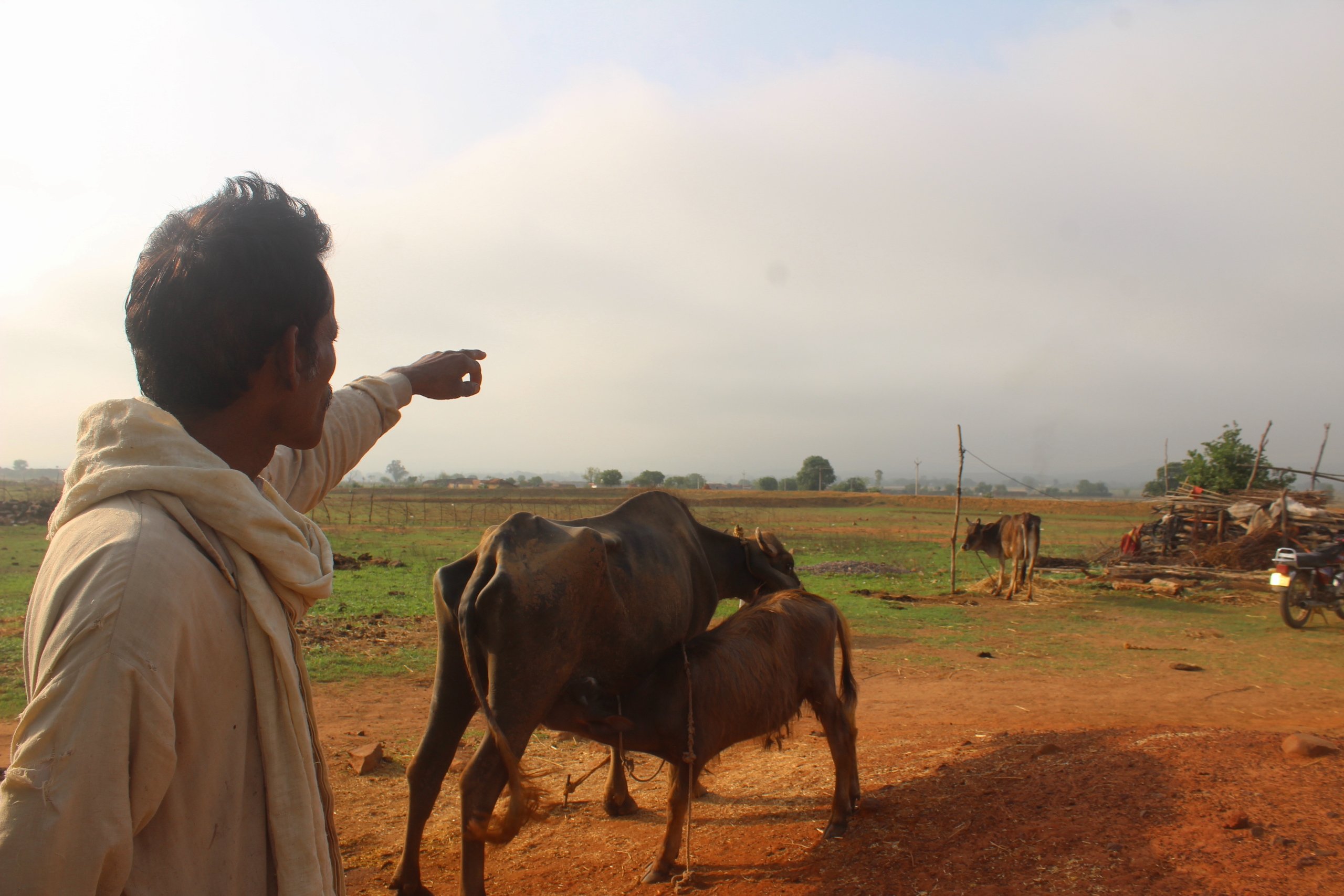 Raghunandan Yadav points to show how far away the family’s source of water is during the summer months (Image: Jigyasa Mishra)

Officials The Third Pole spoke with pointed out that they take steps to alleviate the situation in Bundelkhand. “We supply water tankers in 62 villages [in Chitrakoot], which move between hamlets, taking water to each one,” says Shukla, the Chitrakoot district magistrate. “This begins from April and goes on till June until the monsoon arrives and the wells and pumps start functioning.”

Shukla adds that “for the longer-term solution, we are working for the ‘Har Ghar Jal’ [Water in Every Home] programme implemented by Jal Jeevan Mission under the Ministry of Jal Shakti, under which the pipelines work is ongoing and by the end of this year we will be able to supply piped water to every village, in and around Chitrakoot.”

Water scarcity also affects access to sanitation. The government’s data states that Satna district, among other districts in Bundelkhand, is now free of open defecation. This does not match up with the lives of women The Third Pole speaks with.

“We do not even have a bathroom. Very few people in the village have. Why would we, when there is no water in the first place?” Kamlawati says. “Every one of us goes to bathe at the well.” 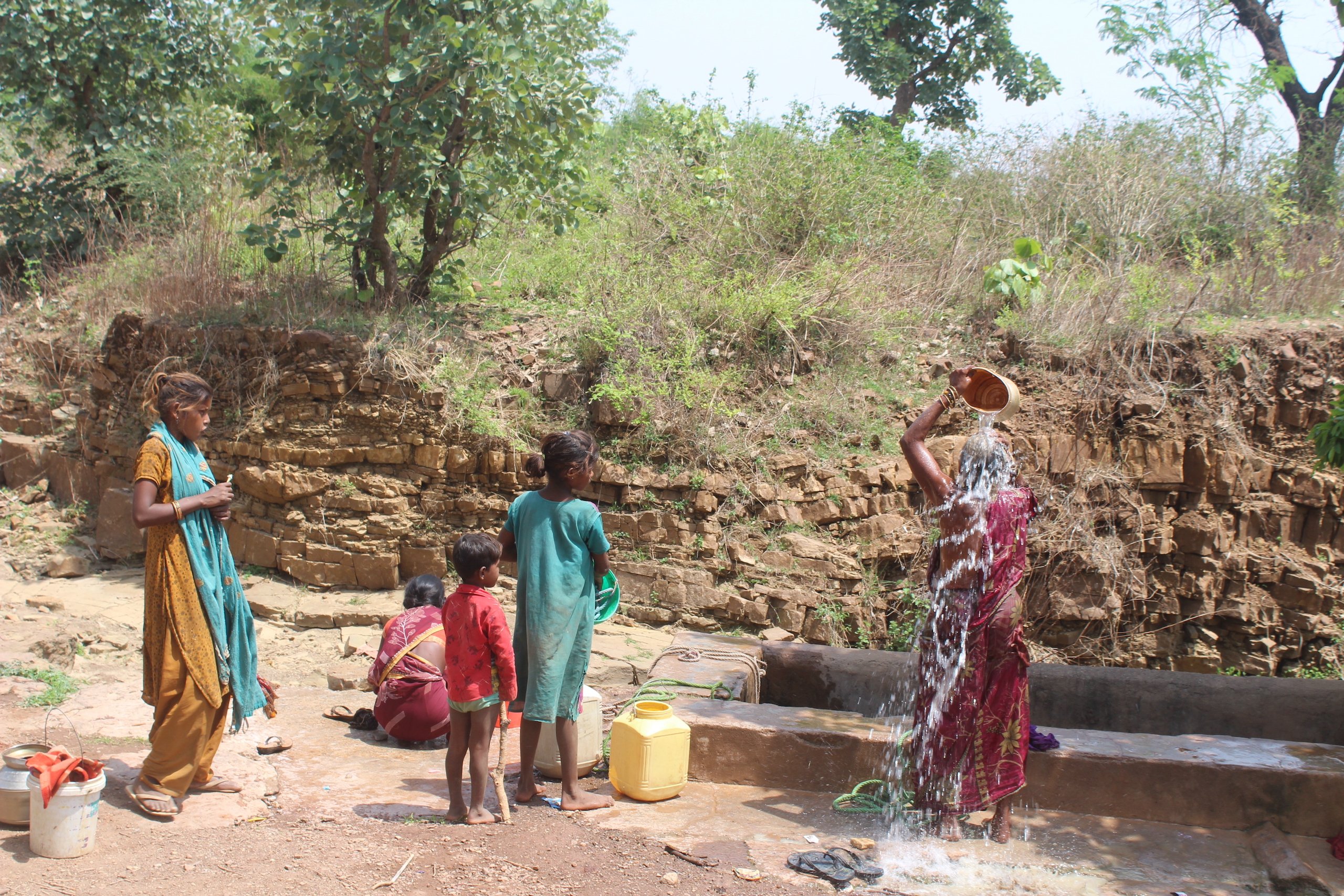 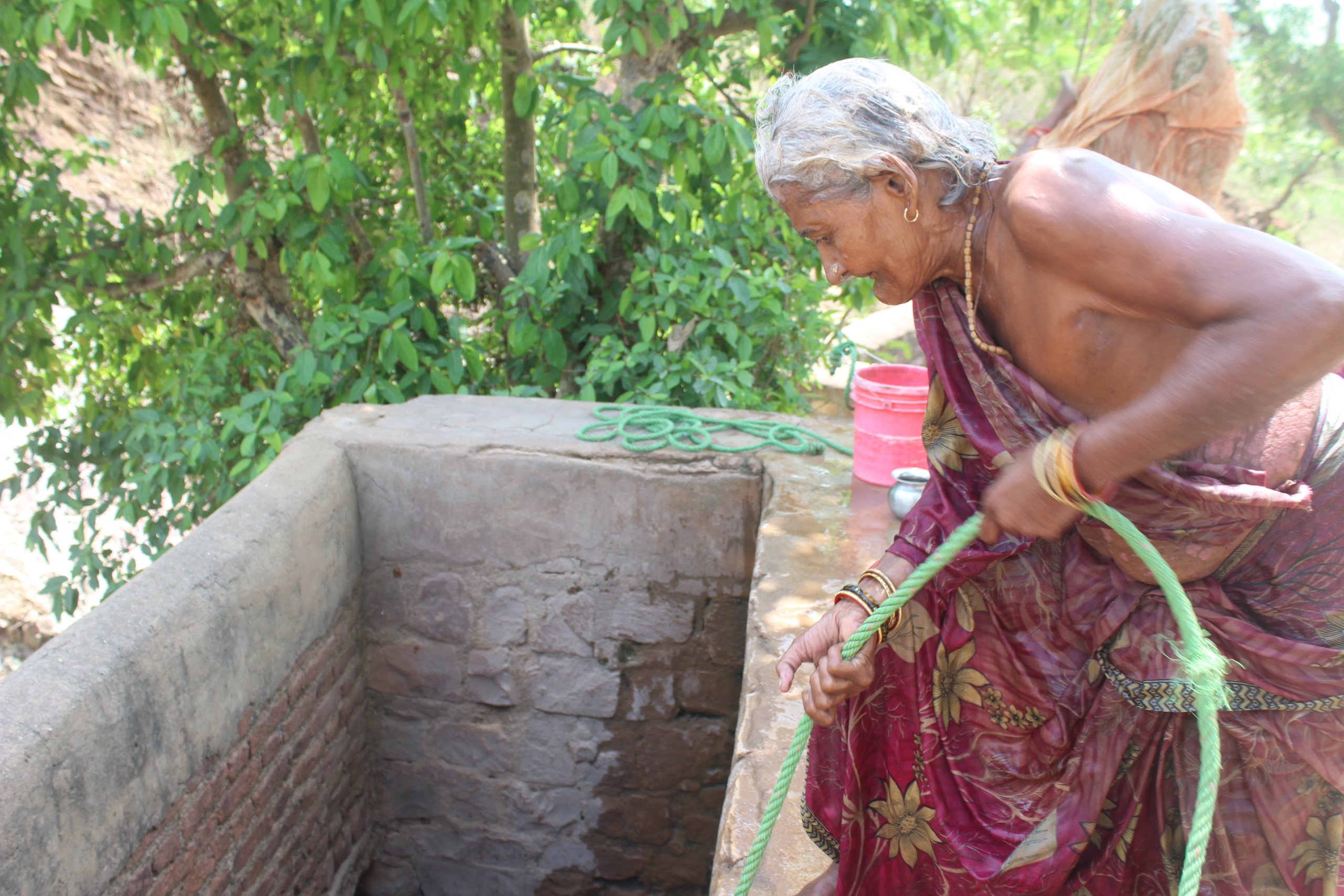 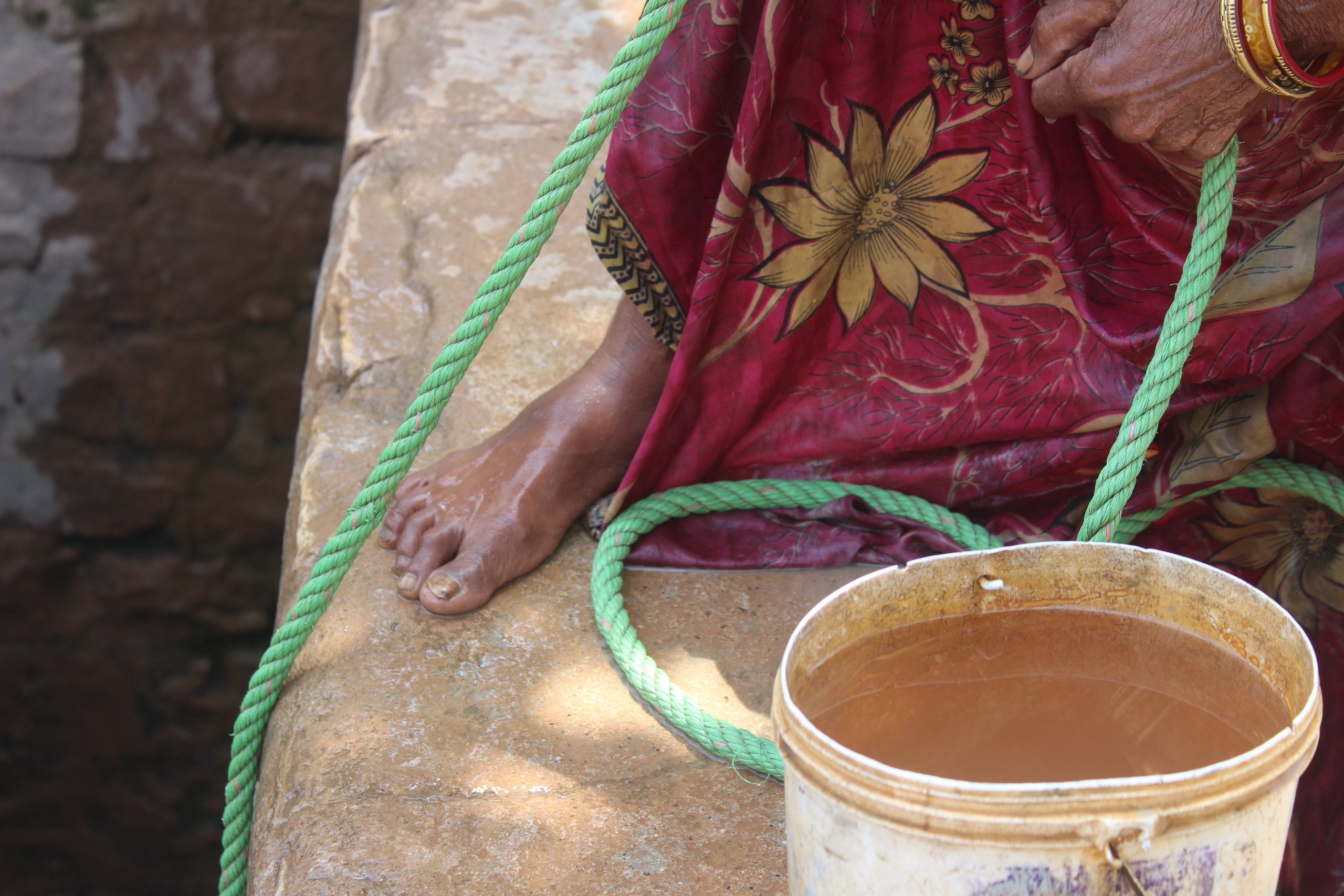 The 72-year-old then hauls the day’s water up from the well, filling an old plastic container that originally held cooking oil (Image: Jigyasa Mishra)

Barely 10 kilometres away from Kamlawati’s village, Santo Devi also walks half a kilometre every day to fetch water from a well. The 72-year-old says she once fell, slipping in the mud and fracturing her wrist when she went to relieve herself in a field during the monsoon.

Santo lives with her son and her daughter-in-law in Michkurin village. Their house is barely 100 metres away from the busy main road. Trucks pass through in the night, and there is danger of accidents, as well as fear of strange men.

“My bahu [daughter-in-law] can’t go alone if she gets nature’s call in the evening, night or even small hours. The place is not safe,” she tells The Third Pole.

The district magistrate blamed social conditioning for such situations. Shukla claimed that even when toilet facilities exist, “there have been nuclear families emerging who opt for open defecation. Moreover, it’s a behavioural change and we now see positive change in 90% of people who used to defecate in the open till a few years back.”

But the problems do not stop there. Kamlawati says that when her daughter is menstruating, she has to walk up to 2 kilometres to a hand pump to bathe and wash her sanitary cloth.

“From day one to the fourth and sometimes even fifth, I have to walk four kilometres up and down, in pain, under the scorching sun. I cannot change the cloth here in our one-room house, nor can I wash it openly with the limited water we have at home… At times, I keep the same cloth on for hours when I am unable to walk due to unbearable cramps,” says 15-year-old Anuradha, Kamlawati’s daughter. 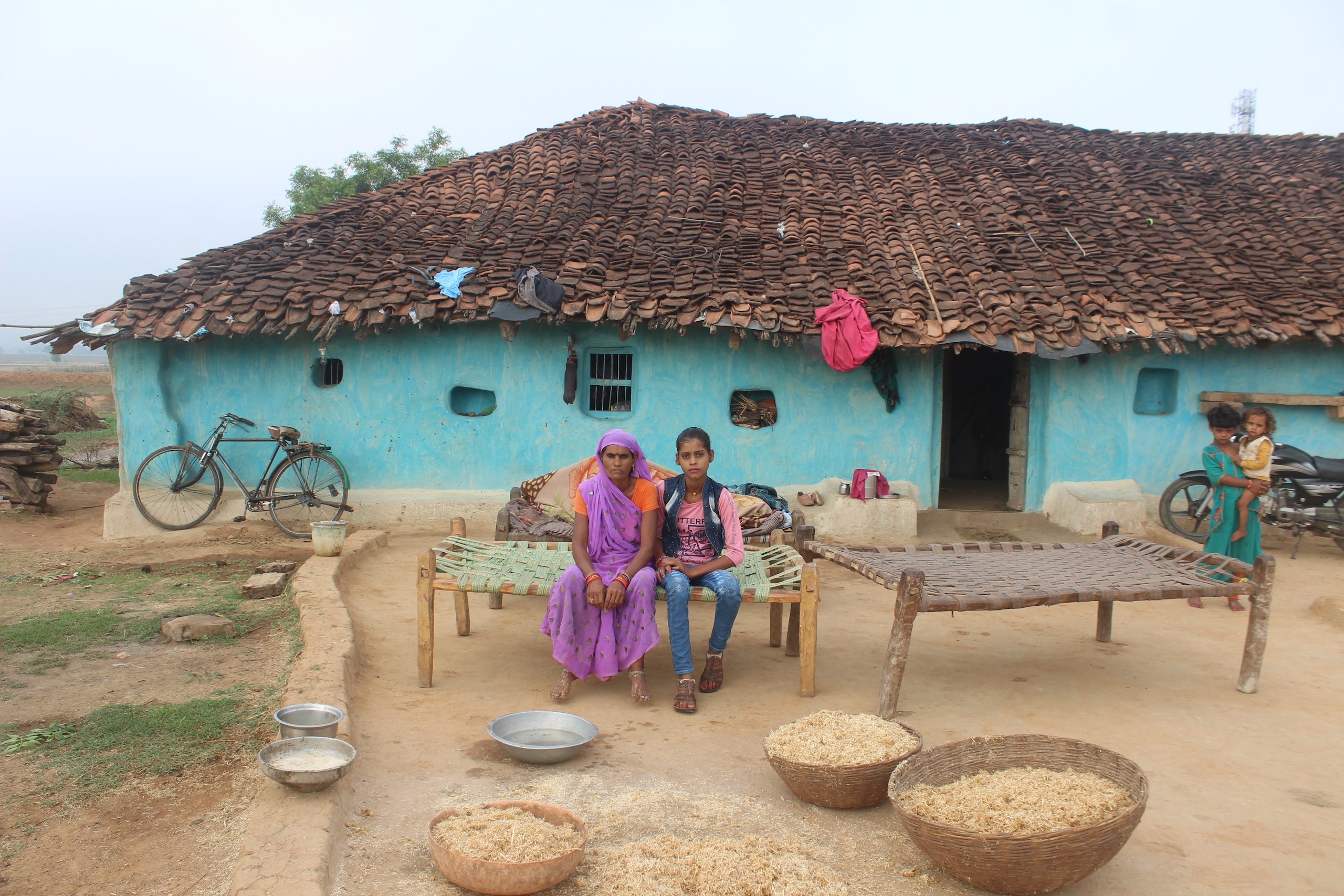 Rafiq Ansari is an obstetrician-gynaecologist at the district hospital in Chitrakoot. He says: “Reproductive health of women is anyway poor in the rural areas. When it is topped with extreme climate conditions, a pandemic and never-ending water crisis, the problem definitely hikes. Water unavailability compels them to do more labour and keeps [them] from maintaining hygiene.”

The problems of geography and gender are compounded by caste. “The family we go to take water from has their own [borewell] and they are kind enough to give us four buckets a day. Before this, we got our water from another family, one kilometre away. One day they started charging us 50 rupees [USD 0.70] for four buckets of water. They would not charge the Thakurs [who belong to a privileged caste] any amount, though,” says Kamlawati. 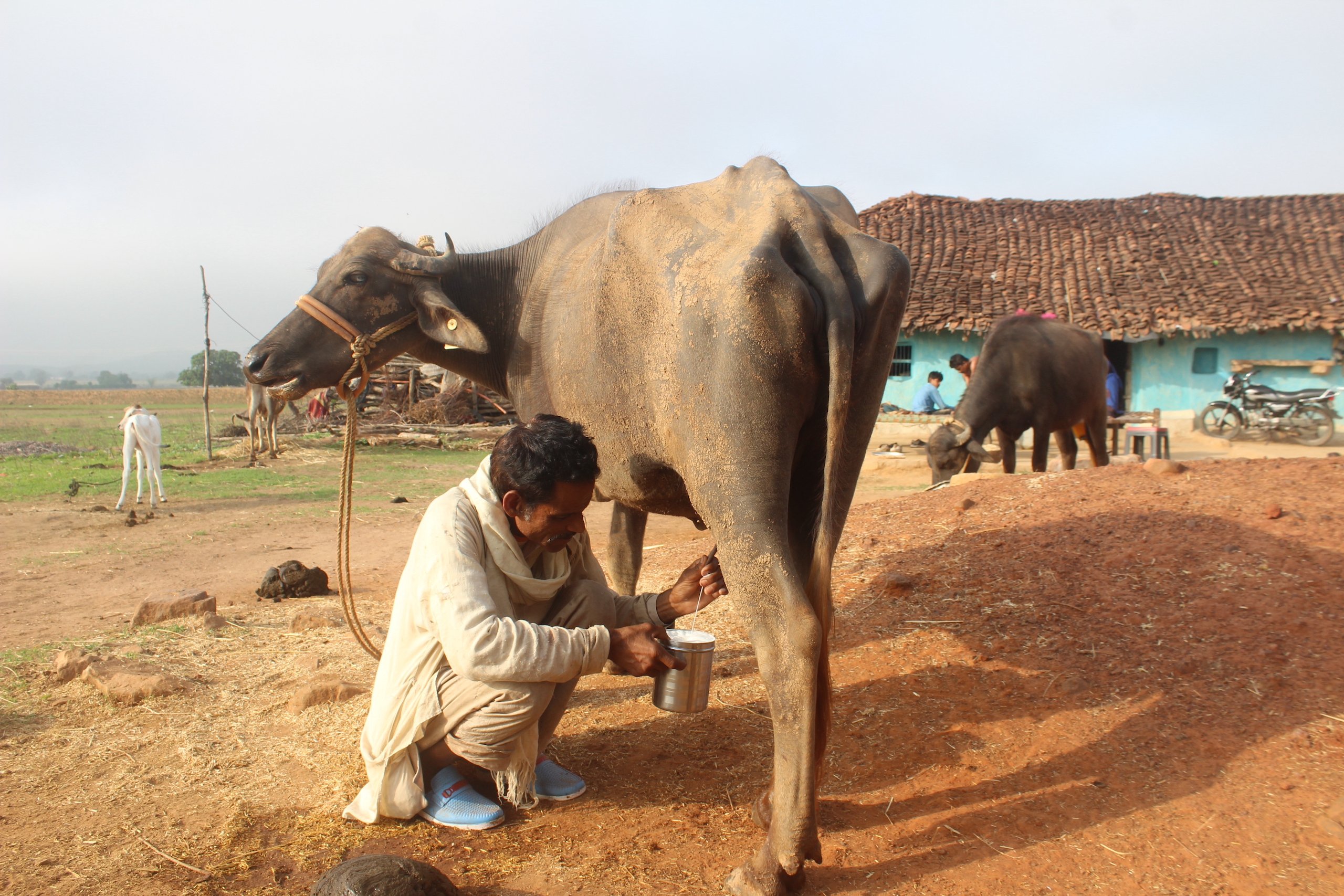 Raghunandan milks one of his buffaloes (Image: Jigyasa Mishra)

The family owns six buffalo, and depend on a local pond to water them.

“This is our only source of income,” says Raghunandan, Kamalawati’s husband, pointing at some fresh milk in a steel jar as he milks one of the cattle. “I sell it for 30 rupees per litre. Which becomes… how much? 2,700 [USD 35] per month.”

He finishes milking the buffalo and leaves to deliver his produce.

Why women’s leadership is key to climate action

No woman no water: empowering women to be water and sanitation decision-makers