Recurring landslides on the 889 kilometres of roads being widened under the Char Dham Project (CDP) in Uttarakhand have made life miserable for residents this monsoon. The CDP, with an estimated cost of INR 120 billion (USD 1.64 billion), is one of the largest road-widening projects in the Himalayan region of India. It was inaugurated by the Indian prime minister in December 2016, and work is proceeding at 36 out of 53 sites.

With the aim of widening the roads to four of Hinduism’s holiest shrines in the Himalayas – Kedarnath, Badrinath, Gangotri and Yamunotri – the CDP is a prestige project of the Bharatiya Janata Party that rules at the centre as well as the state. 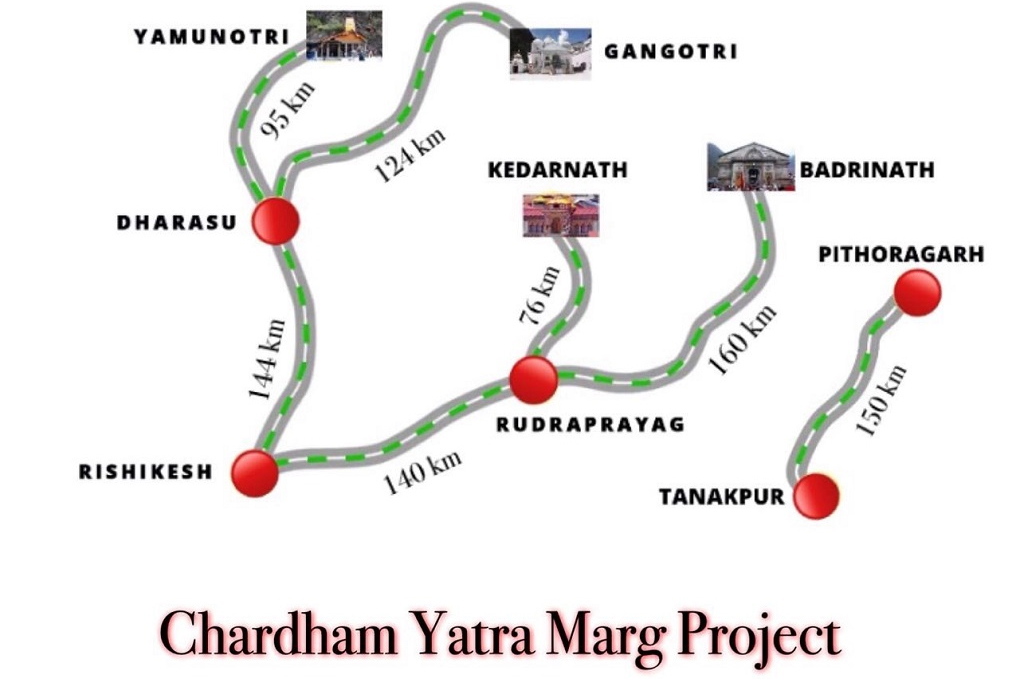 But roads in the world’s tallest and youngest mountain range can be widened only by scooping out trees, soil and rocks from the hillsides – which makes the entire slope unstable. The more that is scooped out, the more unstable it is. The situation is worsened if the bare hillsides are left untreated – without planting afresh, without placing meshes to hold the soil in place, without blocking the natural water channels along the slope. It is further worsened if the debris is just dumped down the gorge and ends up in the rivers below.

As things stand, road blockages due to landslides along the CDP route have made vehicular movement difficult; several people have been killed due to boulders and other debris falling from slopes left untreated. Three members of a family died in Rishikesh on July 31 when debris from an embankment fell on a house. This was on the 29-kilometre Rishikesh-Tehri road which was widened under this project.

Narendra Pokhriyal, a resident of the village of Pipalkoti, said, “The contractors are cutting hills, widening the road and moving further without treatment of the slopes at most of the places. This situation can be witnessed on the entire route of the Rishikesh-Badrinath highway.”

Some of the affected residents went to India’s Supreme Court last year, which appointed a review committee to be chaired by noted environmentalist Ravi Chopra. In a recent report, the committee pointed out that out of 174 freshly cut hill slopes, on one route alone 102 were found to be landslide-prone. In just four months of 2020 there have been 11 slope failures – almost one a week. Uma Joshi, one of the petitioners to the Supreme Court, was among eight people killed when boulders and rubble from a landslide toppled their vehicles into a gorge at Chandidhar on the Kedarnath route last October.

Hemant Dhyani, a member of the court-appointed committee, told The Third Pole, “The greater the road width, the greater is the required slope cutting and the slope destabilisation. Following that you have soil loss, green cover loss, tree felling, loss of topsoil and loss of water source.”

However, 13 out of 18 committee members were in favour of a 10-metre-wide road, which requires a mountain to be cut to a width of 24 metres. Chairperson Chopra and four other members favoured a seven-metre-wide road, of which 5.5 metres would be tarred.

J.C. Kuniyal, a scientist with the government-run GB Pant Institute of Himalayan Environment and Development and another committee member, voted in favour of the wider road. He told The Third Pole, “It is the expertise and mandate of national highway engineers to fix road width under CDP. We, as HPC [high-powered committee] members must give our recommendations based on futuristic approach to accommodate expansion of tourism and transportation on the Char Dham route.”

Since the two groups had made such different recommendations, on August 31, during the most recent hearing of the case in the Supreme Court, the judges said they wanted to hear from all stakeholders. Sanjay Parikh, lawyer for the petitioners, wanted an early hearing, pointing out the recurrence of landslides due to hill-cutting during the ongoing monsoon. The government said it wanted to make “some submissions”. The judges fixed September 8 as the next hearing date. Ravi Chopra is among those the judges want to hear from.

“The remaining 160 km road stretch falls under extremely ecologically sensitive areas like Bhagirathi Eco Zone and upper reaches, so we have suggested to the government to seek a middle path to end the stalemate,” said an official from the central ministry of road transport and highways.

Chandi Prasad Bhatt, the doyen of Indian ecologists, said, “A little widening is required if there is a sharp turn or a rock jutting out on the road. This approach would have been economical and saved 90% of the hill and slope cutting which is the most important factor.”

But many of the roads along the four routes have already been widened, with a metre-wide shoulder on each side. Bhatt said, “Since about 729 km road has been widened to 12 metre width, to control some damage, barring the 5.5 metre wide stretches, the remaining space should be used to build walking paths for pilgrims, with plantations on roadsides and drainage provisions.”

Naveen Juyal, a geologist, explained the CDP will leave its impact on all the valleys through which the roads to the four Hindu pilgrimage centres pass. “The 889 km project was misleadingly broken into 53 smaller projects of less than 100 km each by the central government, thereby evading the necessity of an environment impact assessment which is required for any project over 100 km,” he pointed out. “The truth is that all the four valleys can be encompassed within a circle of 50 km radius. Thus the impacts of the CDP are cumulative and not limited to the specific project areas.”

The committee’s report also pointed out that debris dumped down the gorges badly impacts the habitat of fish species like the common snow trout and brown trout, repress bio-films (food sources of invertebrates which are the cleaning agents of rivers) and destroy the habitat of algae, green bacteria and other aquatic flora and fauna.

Road building in the mountains

India has a detailed set of norms for safe road building in the mountains, in the guidelines prepared by the then Planning Commission for the National Mission on Sustaining the Himalayan Ecosystem, one of the eight missions under its 2008 National Action Plan on Climate Change. But very few of those building roads in the Himalayas are even aware of the guidelines.

To recall just one instance, last year the National Green Tribunal fined two private companies and the National Highway Authority of India INR 20 million (USD 272,208) for violating environment norms while widening a 72.17 km stretch of the road from Udhampur to Banihal in Jammu and Kashmir. It also ordered all three to deposit INR 10 million as “performance guarantee” lest they dump debris into the Chenab and Tawi rivers and fail to stabilise the slopes.

Similar issues plague work in north-east India. S.P. Biswas, a professor at Dibrugarh University who has been working on riverine issues in the states of Arunachal Pradesh and Assam for the past three decades, told The Third Pole, “In a hilly terrain, roads are usually constructed alongside a river. The road leading from Tezu to Hayuliang, the easternmost district town of Arunachal Pradesh, is almost entirely along the Lohit. The entire Himalayan region is geologically very fragile. The pre-monsoon rains in Arunachal Pradesh usually start in February-March. Landslides are very common [in the regions with heavy rainfall] and, since the 1970s, this natural process has been accelerated by human activities, notably due to rampant deforestation and road construction works.”

“Consequently, the single channel river has been enormously affected near Tezu in two decades due to high sedimentation,” he added. “This has a severe impact on the geomorphology of the river downstream and on the aquatic biota. Faunal assemblage has been changed in a span of a few decades. The large fish and other mega-fauna have lost adequate ‘cover’ and their populations have drastically depleted. But the hardest hit among the biota is the Gangetic dolphin, the national aquatic animal of India.”

As the CDP rolls on, without a comprehensive environmental assessment, the future of the people as well as the flora and fauna of Uttarakhand remains to be seen.

Extreme rainfall events have more than doubled in Himalayas

The Pakistani children’s author focusing on the planet