To the officials of Koshi Tappu Wildlife Reserve, water hyacinths and bulrush are destructive invasive plants that disturb the aquatic ecosystems of Nepal’s only wildlife reserve. But to Rudridevi Sardar, they are what sustains her livelihood.

Every day, the 55-year-old weaves mats from dried water hyacinths and bulrush (also known as typha) on her traditional loom.

“Everybody in our community knows how to weave mats from these plants,” said Rudridevi. “Even the little kids can.” 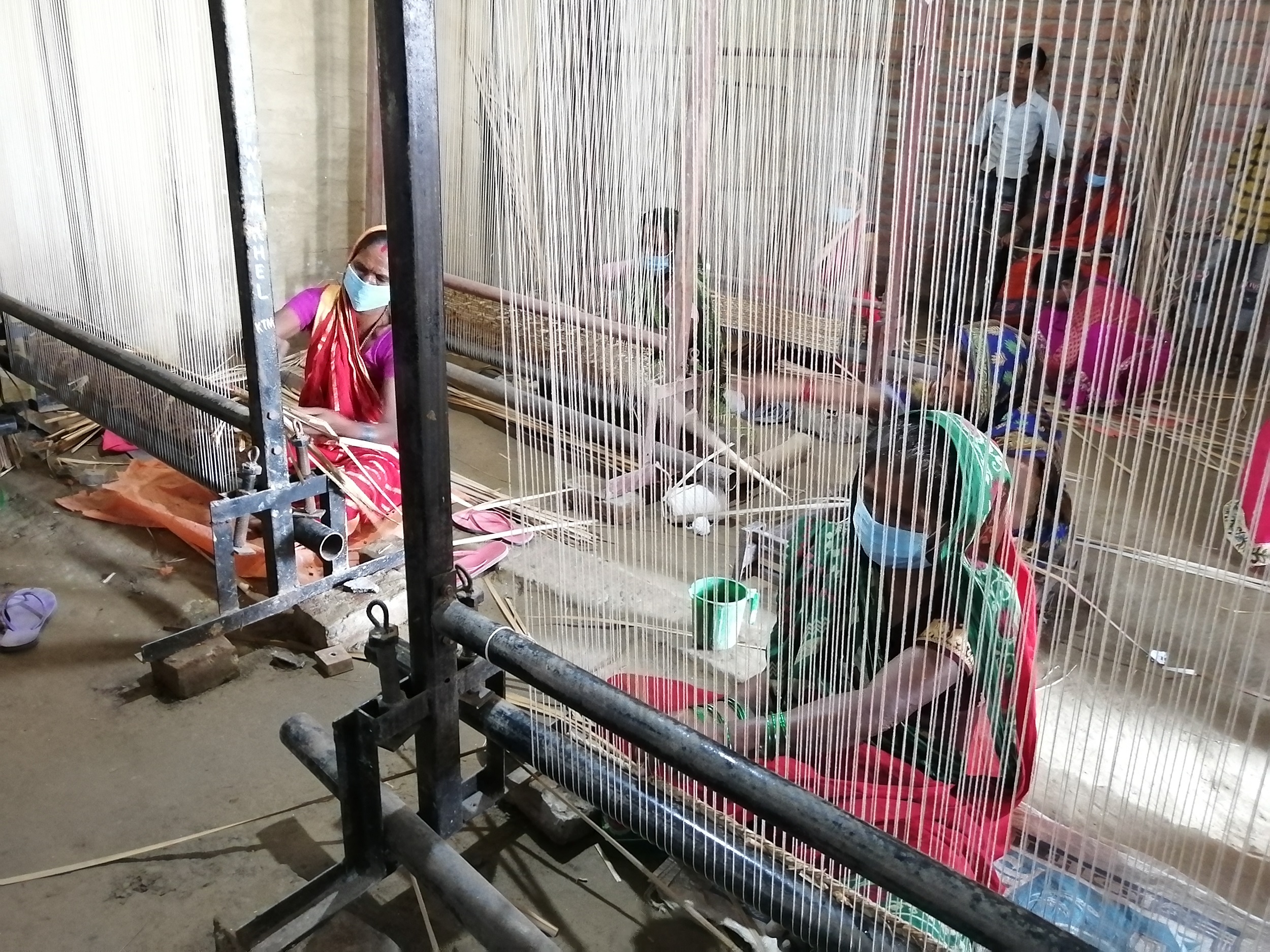 Women at the community loom [image by: Birat Anupam]

Rudridevi is a member of the Sardar community, an indigenous people in Nepal’s southern plains and neighbouring Indian states. She lives in a protected area of the floodplains in the eastern district of Sunsari.

Her husband died 15 years ago, leaving her with two sons and two daughters – and not enough land to grow crops that would sustain the family. But by weaving mats and selling them at market, she was able to provide for them.

“Now all four children are married,” she said, smiling. “Still, I do not need their money. I can earn for myself.”

Shambhadevi Sardar, 55, and Dhanmatidevi Sardar, 60, of the same locality, are also financially independent thanks to this skill. “We have plenty of pater (bulrush) and jalkumbhi (water hyacinth) around our homes and wildlife reserve,” said Dhanmatidevi. She added that demand is high for the mats, with people travelling from Kathmandu to buy them.

All three are members of Koshi Tappu Wetland Multipurpose Cooperative, a group of 25 Sardar women that was set up in 2010 and is chaired by Rudridevi.

Recently, men have started to join the women-led enterprise. Gulat Sardar, 60, Shambhadevi’s husband, now works alongside his wife. “If we work together, we can make more mats. More mats mean more money,” he chuckled.

Jageshwor Sardar, 65, who is married to Dhanmatidevi, also collaborates with his wife. “She can do better, but I can help her,” said Jageshwor.

Muneshwor Sardar, 50, had a different story. He lost his wife in 2017 during a wild elephant attack. The father of two sons, both now married, earns a living using the loom his wife left behind. 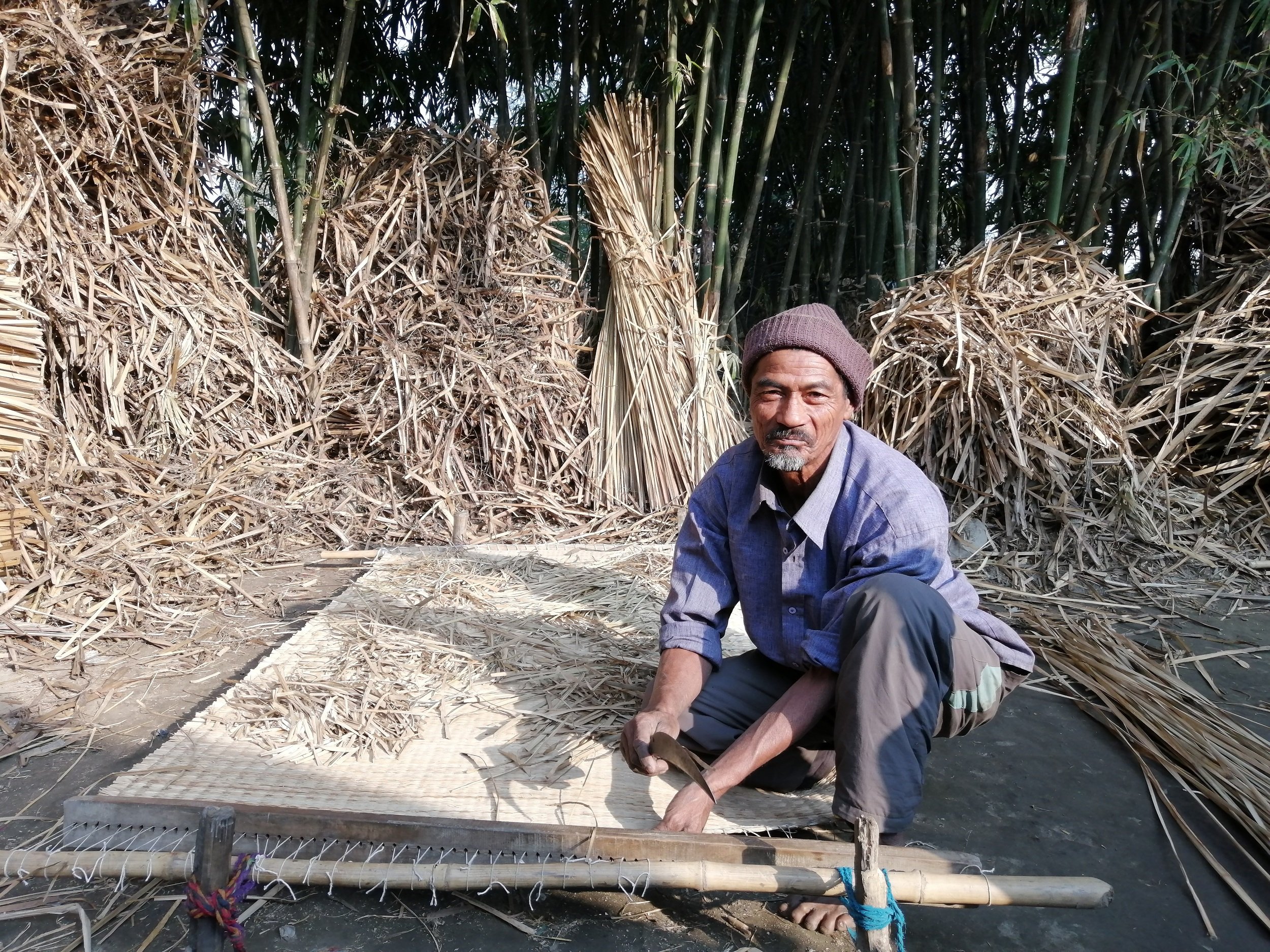 60-year-old Gulat Sardar is the husband of Shambhadevi Sardar. Both of them work to support the family [image by: Birat Anupam]

‘Win-win for community and conservation’

As a Ramsar site, Koshi Tappu is a wetland of international significance. But invasive plants threaten its biodiversity.

Ashok Ram, chief conservation officer of the wildlife reserve, said hyacinths and bulrush cover approximately 1,000 hectares of the 17,500-hectare reserve. It is unknown how the non-native plants were introduced, he said, as “they appeared all of a sudden”, with “no record that they were brought here by locals or park officials”. 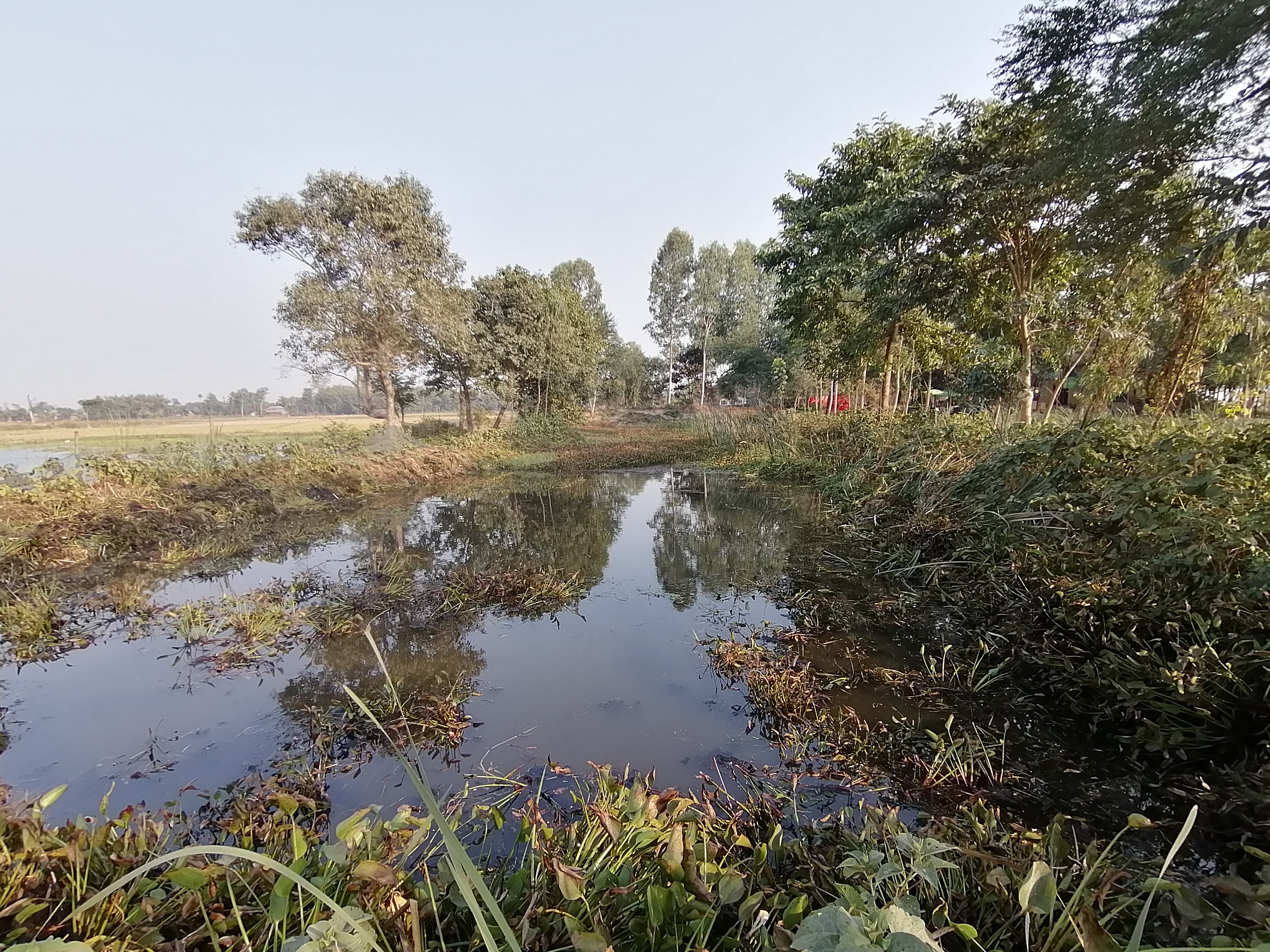 Ramdev Chaudhary, former chief conservation officer of the reserve, said “the water hyacinth is one of the world’s most invasive plants and is known to cause significant ecological and socio-economic effects”, quoting a study on the plant.

1,000 hectares of the 17,500-hectare Koshi Tappu Wildlife Reserve is covered by invasive water hyacinth and bulrush

Native to South America, water hyacinth plants lock together to create a dense mat on the surface of the water. Oxygen levels fall and water quality is altered, which impacts tiny aquatic creatures. They can also change water flow. Chaudhary added that water hyacinth envelops and kills native plants.

Similarly, fast-spreading bulrush can crowd out native plants, leading to a loss of biodiversity.

Chaudhary therefore encouraged the use of the unwanted plants in handicrafts, with one 72”/48” mat using six kilogrammes of wet hyacinth and bulrush. “Supporting Sardar community skills and commercialising them has been a win-win situation for community and conservation,” he said. 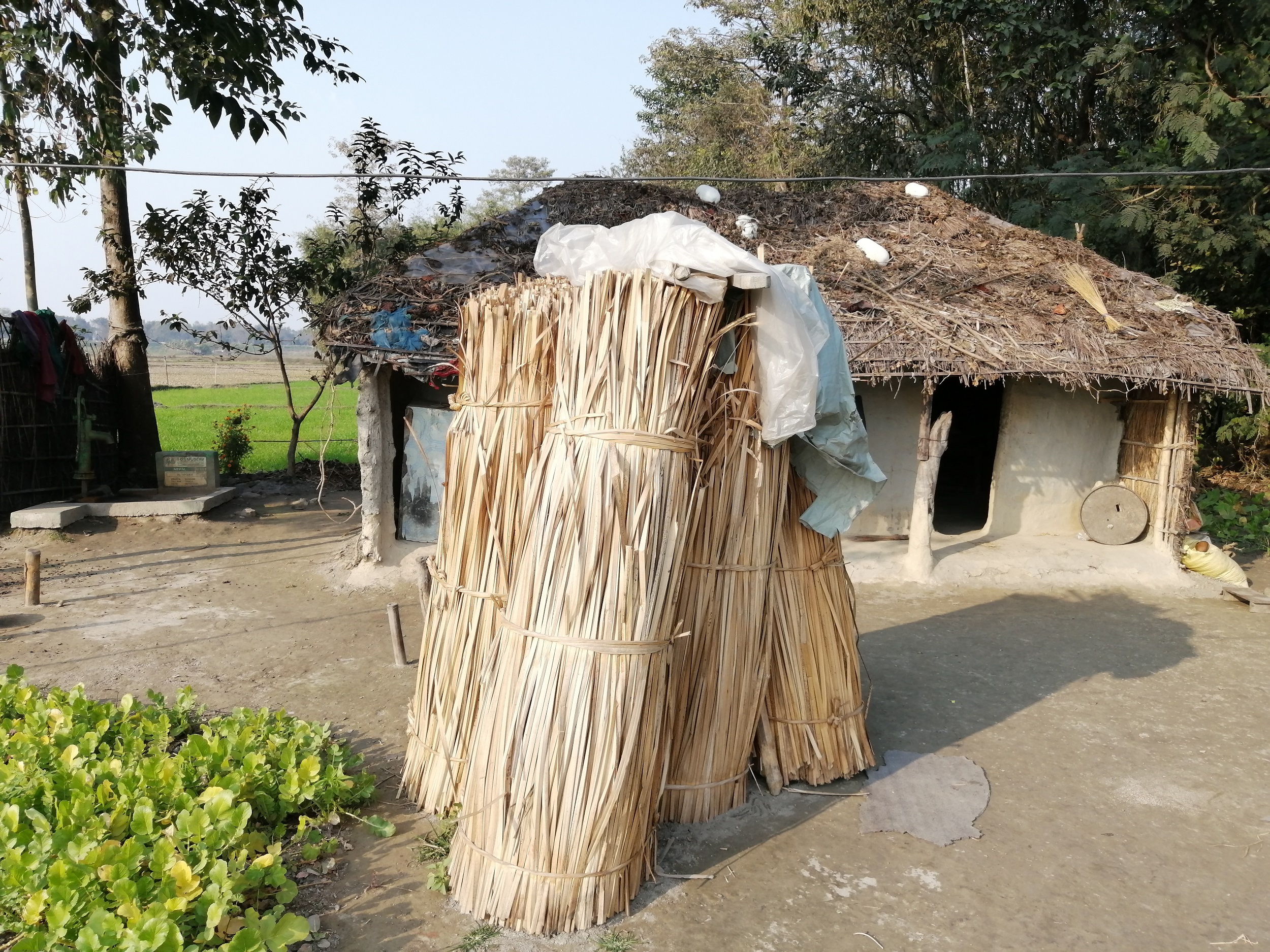 “First, this uses wetland waste productively. Second, it improves the livelihoods of the Sardar community and third, it creates more space for fish and snails which are also good fodders to wetland-dependent indigenous communities like Sardar.”

Ram said that while such initiatives will not permanently eradicate the plants, uprooting large quantities helps to safeguard the ecosystem. “Indigenous enterprises can help lessen invasive plants’ impacts through annual harvesting,” he said.

The Sardar community, formally known as Bantar, are a marginalised indigenous group. They live mainly in 12 districts of southern Nepal and the adjoining Indian districts of Shaharsa, Darbhanga, Purnia and Madhubani.

The Bantar are also one of the 10 biggest indigenous Nepalese communities dependent on wetlands. For generations, Sardar women have depended on wetland resources for traditional handicrafts, Satya Narayan Sardar, a scholar from the community, told The Third Pole.

Acknowledging the crucial role of communities in conservation, in 2008, the United Nations Development Programme and government of Nepal jointly launched a programme to encourage collaboration in the management of wetlands called Conservation and Sustainable Use of Wetland in Nepal (CSUWN).

In 2010, CSUWN organised trainings for the cooperative, focusing on the harvesting of materials and weaving techniques. “I was invited to provide training for three days to Sardar women. But I was so impressed with their beautiful skills that I requested to extend it by a further 10 days,” said Shyambadan Shrestha, the founder of Nepal Knotcraft Centre, which provides training to women and sells their products in Kathmandu and internationally. 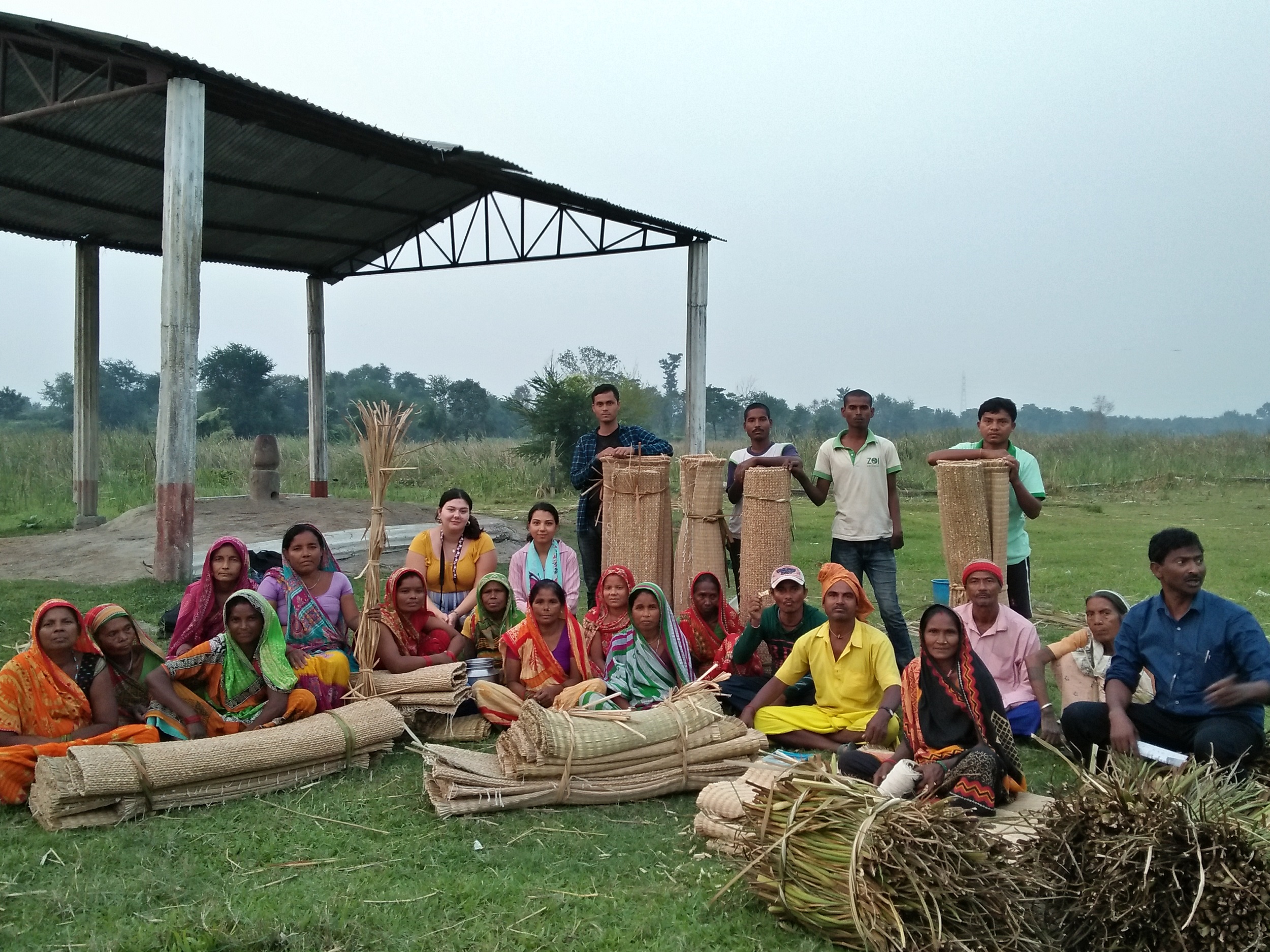 Through such initiatives, the CSUWN aimed to boost the confidence of Sardar women, help them get a better price for their products and access markets. Help has also come from the Rotary Club of Jawalakhel in Kathmandu, a non-profit human rights organisation, which has a revolving fund of NPR 161,000 (USD 1,400) to finance the group’s operations and has donated six community looms.

Market comes to the wetland

Koshi Tappu Wildlife Reserve is a famous travel destination. Before the pandemic, hundreds of visitors would visit every day.

To take advantage of this, in September 2020 Sardar women opened a souvenir shop selling handmade mats, purses, bags, curtains and statues. Rudridevi Sardar said the shop has brought market to her doorstep. “Previously we had to send our products to Kathmandu. Now, people buy where they are made,” she said, elated. 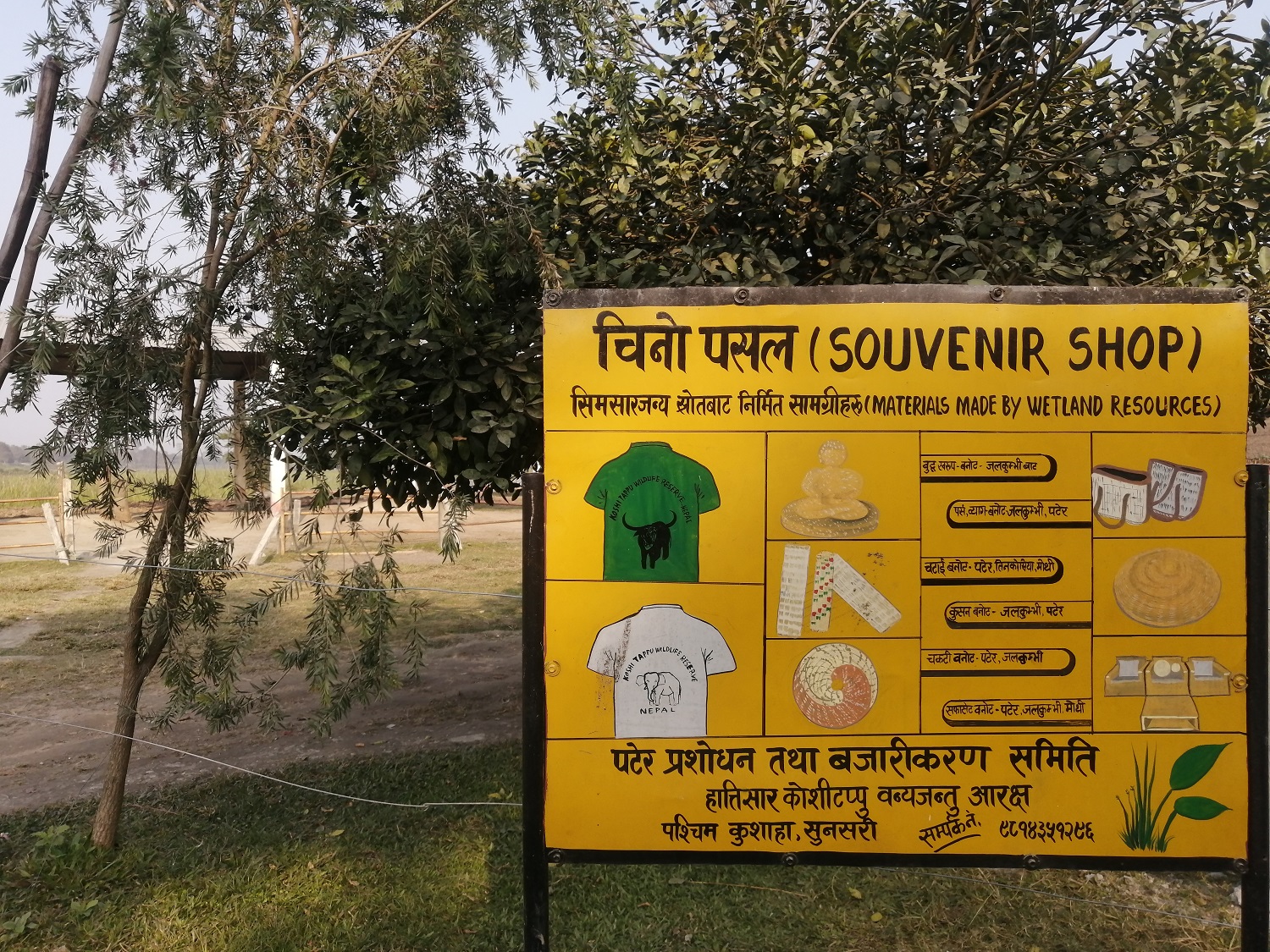 Notice board of the shop [image by: Birat Anupam] 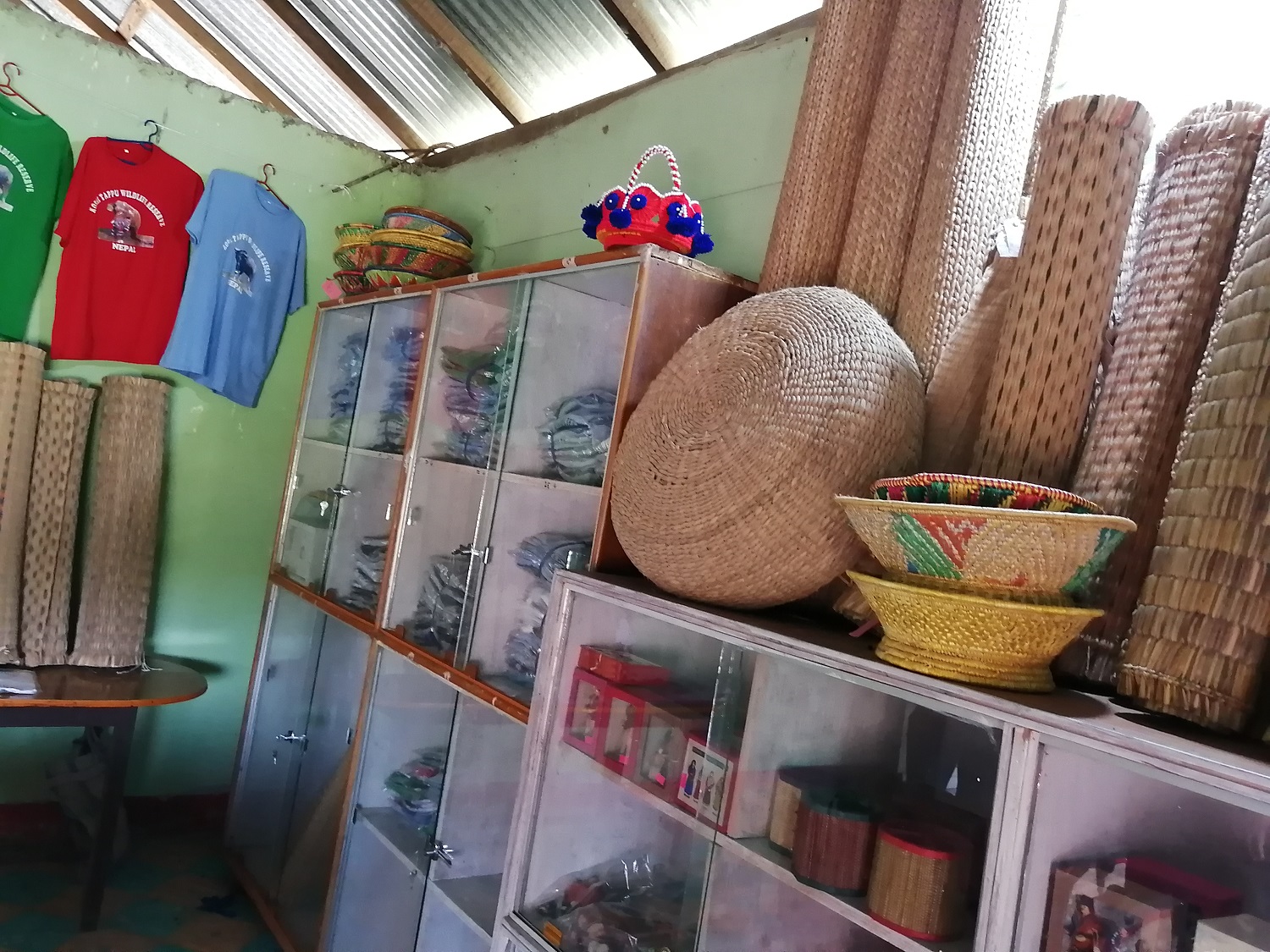 Inside the souvenir shop [image by: Birat Anupam]

Nepal’s lockdown ended only on July 21, 2020. This meant that for most of the year there were no tourists at the reserve. But since September, international and domestic tourism has started to pick up, according to Santosh Bhagat, assistant warden at the reserve. He said that between September and November visitor numbers were in the low hundreds, but picked up to about 700 at the start of 2021.

Ashok Kumar Shah, a local community leader who manages the shop, said that daily sales are above NPR 6,000 (USD 51), adding transactions above NPR 5,000 (USD 43) are enough to sustain the shop.

Chaudhary, the former chief conservation officer, said that to further reduce the harmful impact of invasive plants, more women can participate in the enterprise, adding “for this, we need mass production and mass markets”.

Shah agreed that the project can be expanded, adding that there is a 173.5 square kilometre ‘buffer zone’ (the land between the wildlife reserve and human settlements), where 1,790 people from the Sardar community live.

He added, “We need to encourage all of them to conserve wetland… because indigenous skills matter to nature.”