The Bengal Delta, a thick maze of rivers flowing to the Bay of Bengal, is a place where earth meets water. Those living on the numerous riverbanks are blessed by an endless supply of water, but that doesn’t mean they are not thirsty.

This is the second of two stories investigating the quality of coastal communities’ drinking water. Read our investigation from Pakistan here.

Living along the Bangladesh coast, particularly in the southwest, means facing daily hard choices on how to source and distribute freshwater, a commodity that is becoming increasingly scarce due to salt contamination. Shefali Biswas gets her family’s daily water from a pond about half a kilometre from her home in Bani Shanta, a village in Khulna district.

Visiting the pond two or three times a day to collect water is the 55-year-old’s routine during the dry season, between November and May, when rainwater is scarce. 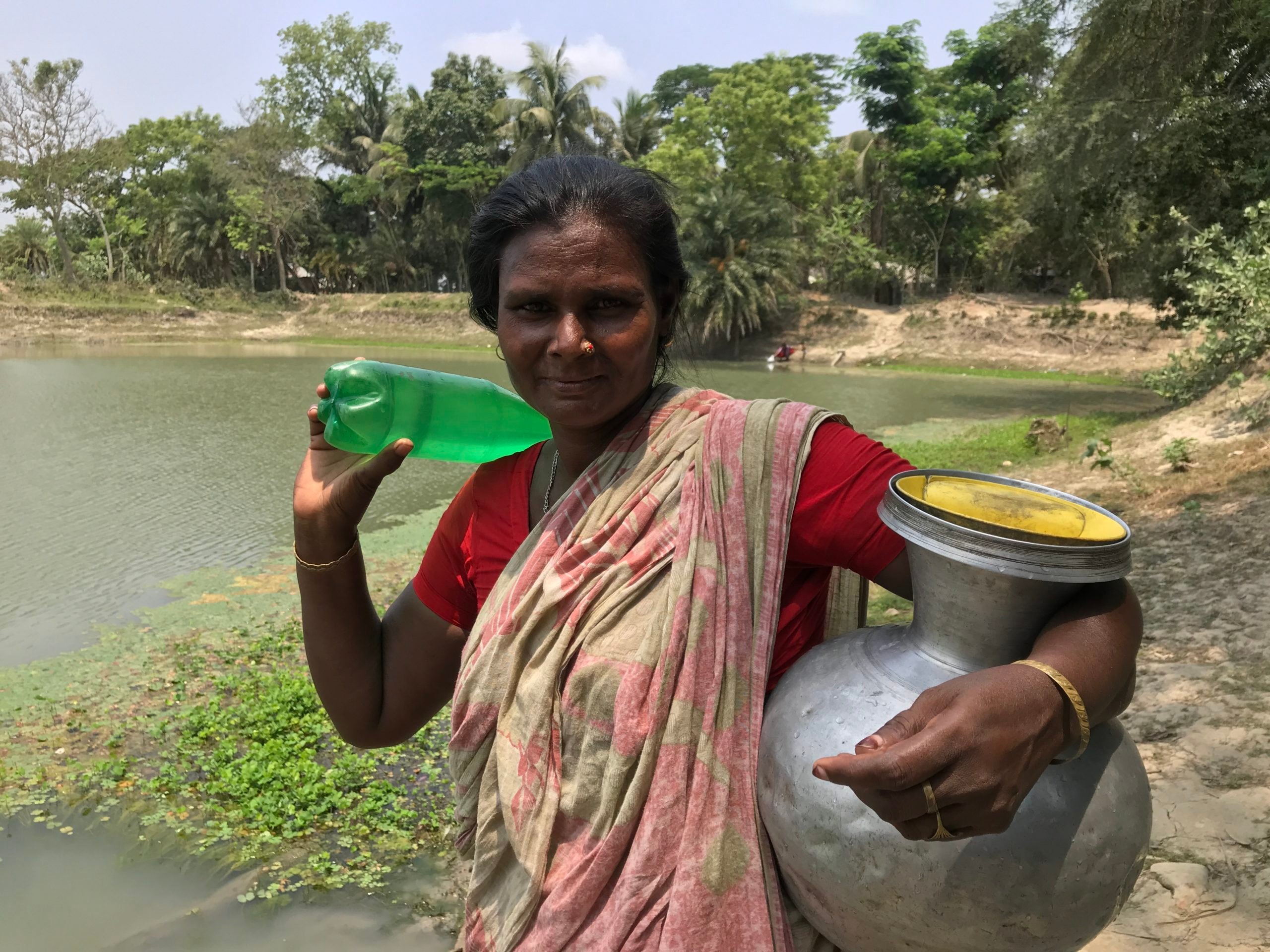 Shefali Biswas is returning home after collecting water from a pond in the sub-district of Dacope (Image: Abu Siddique)

The Third Pole collected water samples and got them tested to understand the extent of the problem.

During the dry months, a reduced flow from the Ganga River, which feeds into smaller streams across the southwest coast of Bangladesh, means that saline tidal water intrudes into these coastal areas, filling the gap left by the lack of freshwater from upstream. Sea level rise due to global warming is exacerbating the problem, as with higher tides even more seawater penetrates the delta. Meanwhile on land, a booming shrimp cultivation industry is contaminating the remaining freshwater ponds.

A 2016 study found that the country has been experiencing 7-8 millimetres per year (mm/year) of sea level rise on the Ganga’s tidal floodplain, a trend also emerging in the Meghna estuarine floodplain and in the Chittagong coastal plain areas, with a rise of 6-9 mm/year and and 11-20 mm/year respectively.

Then there is commercial shrimp cultivation, which started in the 1980s and led to the conversion of arable land near freshwater ponds into saline pools for the crustaceans. As a result, saline water seeped into the ponds, turning their water brackish.

In 2019, the NGO WaterAid Bangladesh examined 57 publicly and privately owned ponds in the Satkhira district, in the southwest of the country. Of these, 16 were fully contaminated by saline water, while the brackish water in 25 others could be used for bathing and other household purposes, perhaps even for cooking, but not safely for drinking. The same situation was observed in other areas along the southwestern coast. 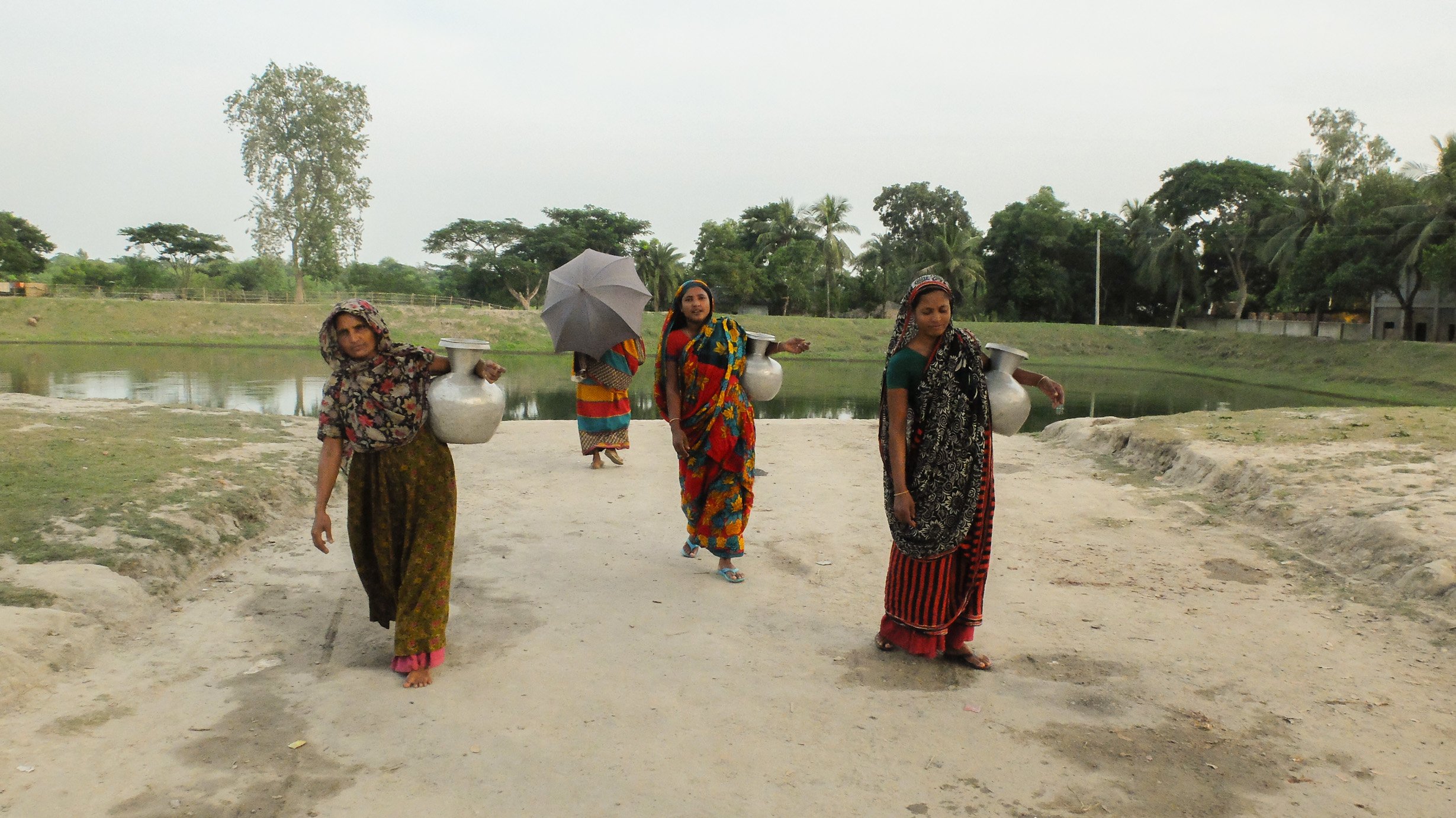 According to the World Health Organization (WHO) and the Bangladesh Department of Public Health Engineering (DPHE), water containing less than 300 milligrams per litre (mg/l) of chloride is considered fresh, while water that contains 300-600 mg/l chloride is drinkable. In 2013, a study on groundwater in the Bengal Delta found that water salinity vastly exceeds this potability level in most areas of the country’s coastal districts. In nature, levels of chloride in water mirror sodium levels, thus high levels of the former in drinking water mean an elevated sodium intake, which is an established risk factor for high blood pressure, among other health conditions.

Multiple studies have investigated the link between high salt intake and hypertension in coastal Bangladesh, observing a direct association between the two, particularly in women and people over the age of 35. Consuming an excessive amount of salt leads the body to retain too much water, which in turn increases pressure from the bloodstream on the blood vessels, a condition known as hypertension.

Khairul Islam, regional director of WaterAid South Asia, said: “The coastal water was never as saline as today. From our long working experience in the Bangladesh coast we have seen that the scarcity of freshwater is increasing by the day.” A physician by training, Islam says that “if we fail to provide the water [people] need immediately, there will be a severe public health crisis in the coastal zone soon.”

Earlier this year, researchers at the Bangladesh Resource Council for Indigenous Knowledge (BARCIK) found that skin diseases, stomach inflammation, cardiovascular problems, fatigue and gestational problems are the top five health conditions among people of all age groups in the country. Urinary tract infection (UTI), irregular menstruation, gestational hypertension and preeclampsia during pregnancy are the most common diseases in women. Among these, rates of UTI and gestational hypertension, which can lead to preeclampsia, are on the rise.

To test whether this increase may be related to water salinity in sources commonly used for drinking, The Third Pole collected water samples from eight different points in Khulna and Satkhira districts. The samples, gathered from ponds, reverse osmosis plants, tube-wells and pond sand filters (a water purification tool provided by both government and non-government agencies) were sent to the Bangladesh Council of Scientific and Industrial Research (BCSIR) for water-quality tests.

The results showed the presence of salt between 1 and 8.8 parts per thousand (ppt) in six samples; the other two contained less than 0.1 ppt. (0.1 ppt is the standard in Bangladesh for human consumption.)

The presence of chloride in six water samples was found to be between 390 and 8,132 milligrams per litre (mg/l) while the standards set by the Bangladeshi government in 2020 allow up to 250 mg/l.

In six samples, the presence of Total Dissolved Solids (TDS) – a measure of the dissolved organic and inorganic substances present in water – was between 687 and 8,996 mg/l, while the acceptable limit in Bangladesh is only 500 mg/l.

Calcium carbonate (CaCO3), which in high doses can damage pregnant women’s kidneys as well as causing skin irritation, was detected in concentrations higher than the permissible limit of 300 mg/l in half of the samples.
Mostafizur Rahman, associate professor of environmental sciences at Jahangirnagar University in Dhaka, said the lack of safe water is one of the major drivers of the diseases prevailing in the coastal region. For instance, he said, due to the absence of readily available fresh drinking water, people end up drinking too little water, and for the same reason women are unable to maintain menstrual hygiene. This combination of factors, according to doctors on the ground and clinical trials, increases the risk of developing UTIs, because the body struggles to flush out bacteria lodged in the bladder.

The problem is not new. A 2008 study by Imperial College London and Bangladesh’s Centre for Advanced Studies found that rates of preeclampsia and gestational hypertension were higher in coastal areas compared to non-coastal areas. 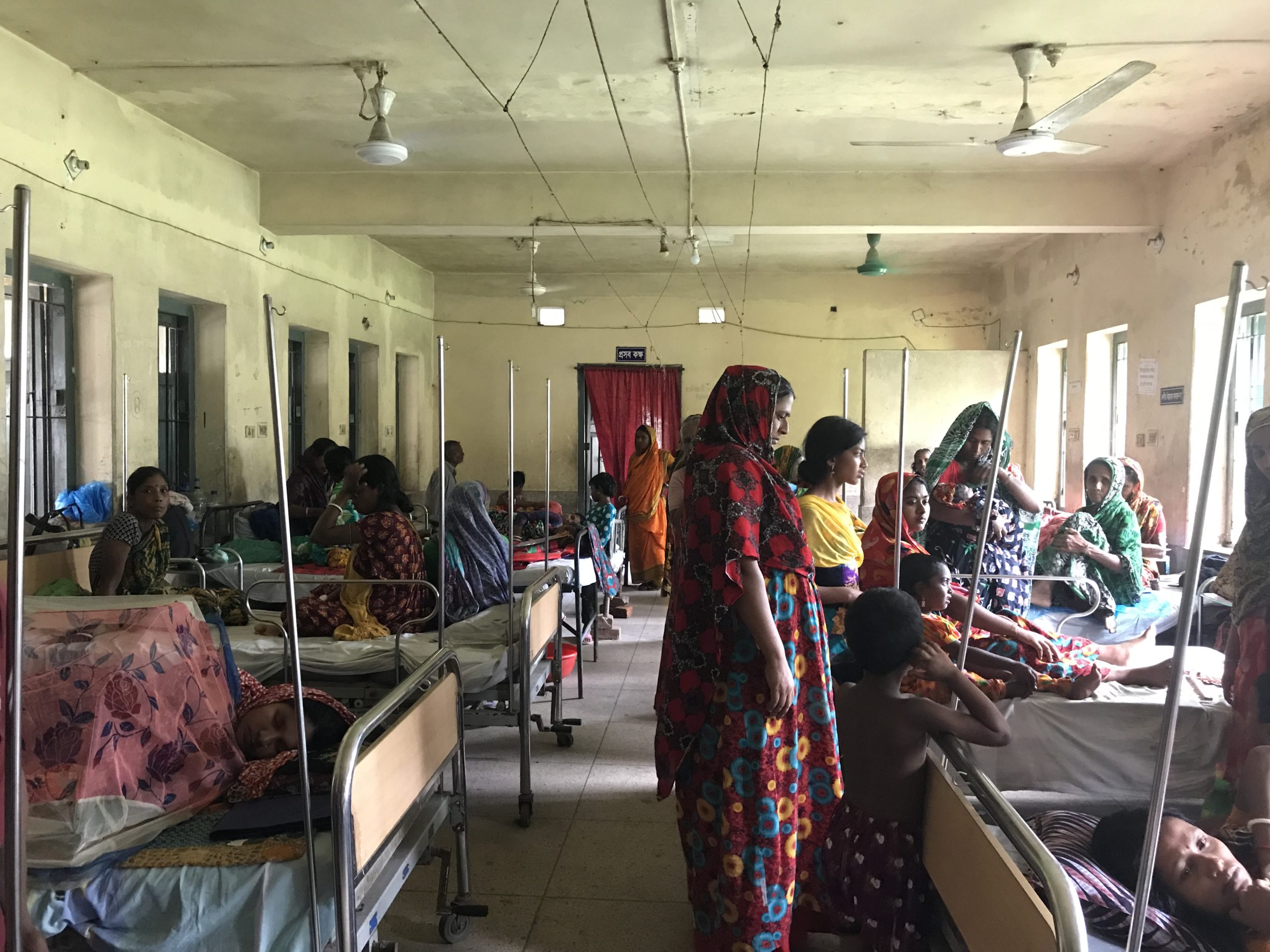 He blamed the trend on the excess sodium chloride women are absorbing through their drinking water. Another rising problem among pregnant patients coming to the hospital with hypertension, he said, is the condition progressing to preeclampsia, where the liver and kidneys may be damaged, leading to serious complications.

According to the hospital database, the number of preeclampsia patients in the health facility stood at 36 in 2012, but reached 54 in 2019. Sontosh Kumar Mojumder, gynaecology consultant at the hospital, told The Third Pole that the rate of admitted patients tends to increase in the dry season, when the salinity level in the region’s water is high.

Anwar Zahid, director of the groundwater branch of the Bangladesh Water Development Board, suggested looking for deeper freshwater pockets to mitigate the crisis for the time being, but acknowledged that shrimp cultivation should be banned near the freshwater ponds.

Some projects implemented by government and non-governmental organisations are trying to promote alternative water sources. The Bangladesh government is implementing a large-scale project to ensure steady freshwater supply through rainwater harvesting with money from the UN Green Climate Fund. NGOs including WaterAid Bangladesh and BRAC are also experimenting with rainwater harvesting and reverse osmosis technologies. However, reverse osmosis produces a large volume of highly polluted wastewater in the purification process, which can damage the local environment if left untreated.

These solutions have benefited only a small percentage of the affected population so far. In coastal Bangladesh, those who can afford to buy treated water do so, paying up to 40 times more than urban residents.

Explore the data behind this investigation:

Rohingya refugees live in fear of cyclones on Bangladesh island