Sixty-year-old Sunil Das has spent his entire life on the Halda, a river in southeast Bangladesh known as a key breeding place for carp. Until 2010, Das and around 2,000 others worked as fishers along the 98-kilometre-long river. After overfishing forced the government to declare the river a permanent sanctuary in 2020, the fishers were still allowed to collect roe (fish eggs) for fish farms. But now climate change, lack of freshwater and pollution have turned the river so saline and polluted that neither fish nor roe are to be found.

According to the Halda River Research Laboratory (HRRL) at the University of Chittagong, fishers collected more than 47,000 kilogrammes of fish roe in 2001, but barely 8,000 kg was harvested this year.

Sunil Das told The Third Pole that two decades ago he would collect 5 kg of roe in a season. But this year, he only managed 250 grams, despite using two boats to search as hard as he could.

“I’m forced to change my profession now. I earn my livelihood working as either a day labourer or by pedalling a cycle rickshaw,” said Das.

Salinity jumps with every cyclone

Cyclone Yaas, the most recent cyclone in the Bay of Bengal, made landfall around 500 kilometres west of the Halda, but surging waves brought so much seawater into the river that salinity jumped from 0.5 to 36.9 parts per thousand (ppt), according to HRRL scientists. The increasing frequency and severity of tropical storms contributes significantly to rising salinity in the Halda, scientists say.

In May 2021, researchers who analysed water salinity in the Halda River found the salt concentration to be 80 times higher than the conventional definition for freshwater of 0.5 ppt, leading to poor egg yields in the river’s fish.

In the nearby town of Hathazari, fisher Parimol Das said: “Due to climate change the freshwater river has turned into a saline water river. This has made the river unliveable for freshwater fishes and destroyed their breeding grounds.”

Hathazari administrator Mohammad Ruhul Amin told The Third Pole that the cyclone ruined the government’s effort to create “a congenial atmosphere” for fish broods. “All our endeavours went in vain.”

Fish farms across Bangladesh depend on roe and fry (young fish) as well as water from the Halda, but water salinity has hit production. “We have been using Halda water for generations in our scoop to produce fries. This year, the water was so saline that it killed all the fries,” collector Rakhal Das said.

Researchers also blame rising temperatures for poor spawning. “The suitable temperature for spawning is 25-28 degrees Celsius but now it has increased to over 30 degrees. Plus, irregular rainfall is leading to less freshwater inflow,” said Abdur Rahman Rana, director of the Center for People and Environ, a local climate research institute.

The Chattogram Water Supply and Sewerage Authority (WASA) supplies Halda water to residents. It now checks water salinity daily. According to WASA, in 2004 the highest salinity recorded in Halda was 400 parts per million (ppm). In the first five months of 2021 the highest record stood at 4,000 ppm.

Salinity also increases during cyclones. ln 2007 after Cyclone Sidr hit the coast, recorded salinity reached 11,500 ppm. In a recent study, researchers concluded that “salinity increased dramatically during dry seasons (January to March) and plunged with the wet seasons (April to July) and it is undeniably rising each year.”

Saleemul Huq, climate change expert and director of the International Centre for Climate Change and Development at Independent University Bangladesh, told The Third Pole that these impacts may increase in future. “We have to take steps to mitigate the impacts of climate change to save the river.”

The Halda used to be a safe spawning ground for freshwater fish, partly due to its many U-shaped bends (also known as oxbow bends), where fry would be safe from surges in the water flow. But residents have been trimming the bends for ease of navigation. The length of the river has shrunk by over 25 km, leaving fewer places for the young fish to hide.

Sluice gates and dams built on the hill streams and canals that feed the Halda now block at least 35% of upstream water flow, according to Manzoorul Kibria, coordinator of the HRRL at the University of Chittagong. “When the river doesn’t get enough upstream water, it fills the deficit by pulling up saline water from the Bay of Bengal,” he explained. 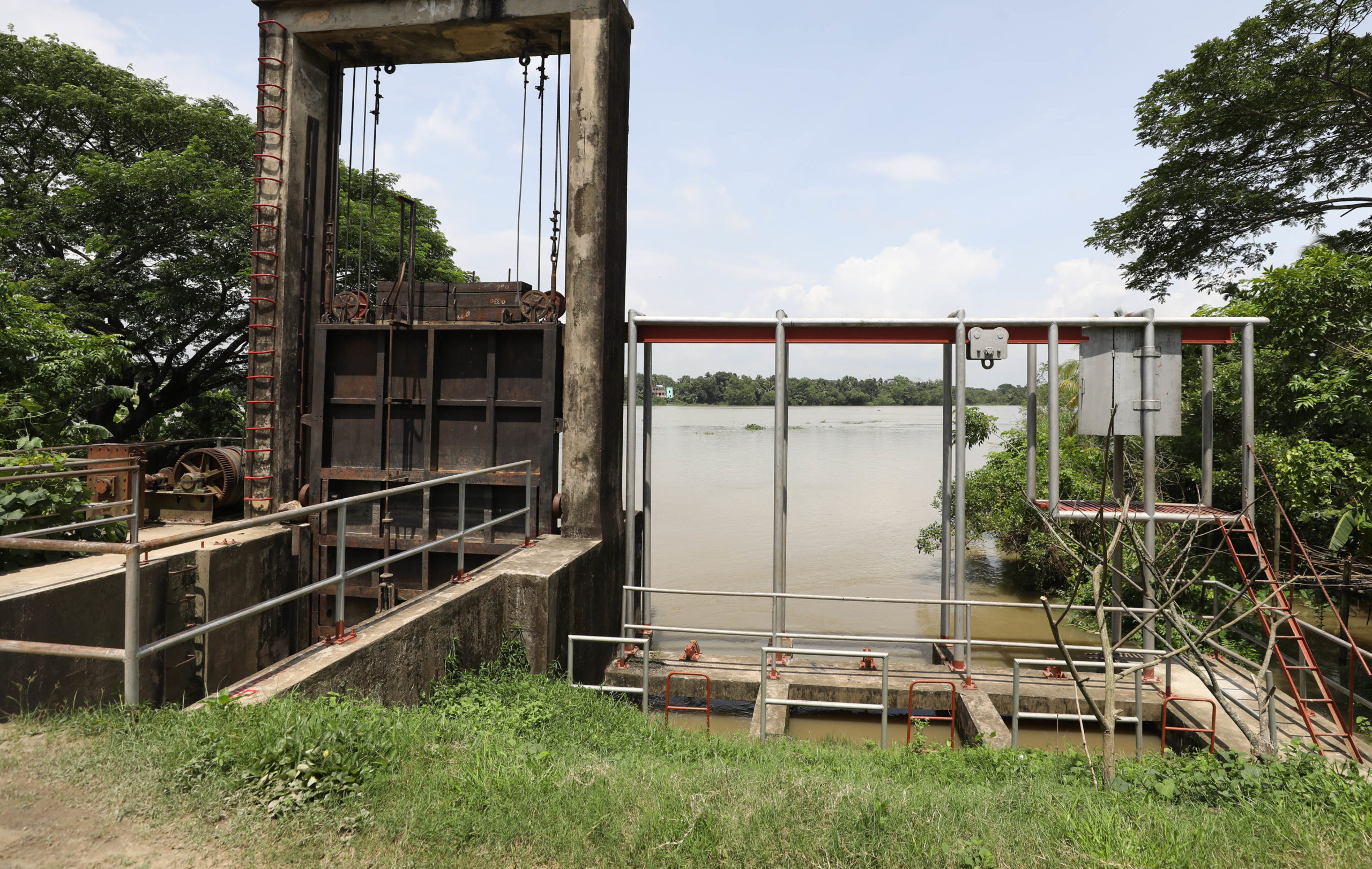 A sluice gate at the mouth of a canal connected to the Halda River (Image: Shamsuddin Illius)

Kibria also blamed unplanned building of embankments. Experts say that paper mills, tobacco processing and other industries established on the riverbank are contributing to the “destruction” of the river by polluting its water with their discharge. Kibria added that WASA extracts nearly 180 million litres (MLD) of water per day, while 250 MLD is taken for irrigation under the Halda Parallel Irrigation Project. This extraction continues at the same pace even in the dry season, when the river already suffers from a shortage of water, Kibria added.

Meanwhile, sewage produced in Chattogram city drains into the Halda River through the Brahaman Shai, Khondokia, Krishnakhal and Koaish canals. Home to six million people, Chattogram has no sewerage systems, leading to millions of tonnes of solid waste being discharged every day into the Karnaphuli and Halda rivers.

Kibria explained that fish would choose the Halda to spawn because the river has physical, chemical and biological features that make it the perfect breeding ground. “The combination of the features creates a conducive environment, encouraging the carp fishes to lay eggs during the monsoon.”

Seventy-six finfish species from 24 families have been recorded in the Halda, according to HRRL. Of these, five species have been lost from the river: the humped featherback, barred baril, sucker head, Gian river catfish and mud perch.

Researchers said that 21 more fish species are currently missing, but further studies are require to determine whether they too have gone extinct. These missing species include the herring, scaly hairfin anchovy, teli phasa, dhela, depalee, silver hatchet, butter catfish and Silond catfish.

The Bangladesh government declared the Halda a fishery heritage zone in 2020 and banned 12 types of activities including sand dredging, water withdrawal, fishing, mechanised boat plying, dam construction or dumping of any waste. The country’s river police installed CCTV cameras along the banks to monitor activities in the river.

“We have conducted 177 judicial raids since 2018, prosecuting people and confiscating boats and dredgers to keep the river safe,” administrator Amin said. 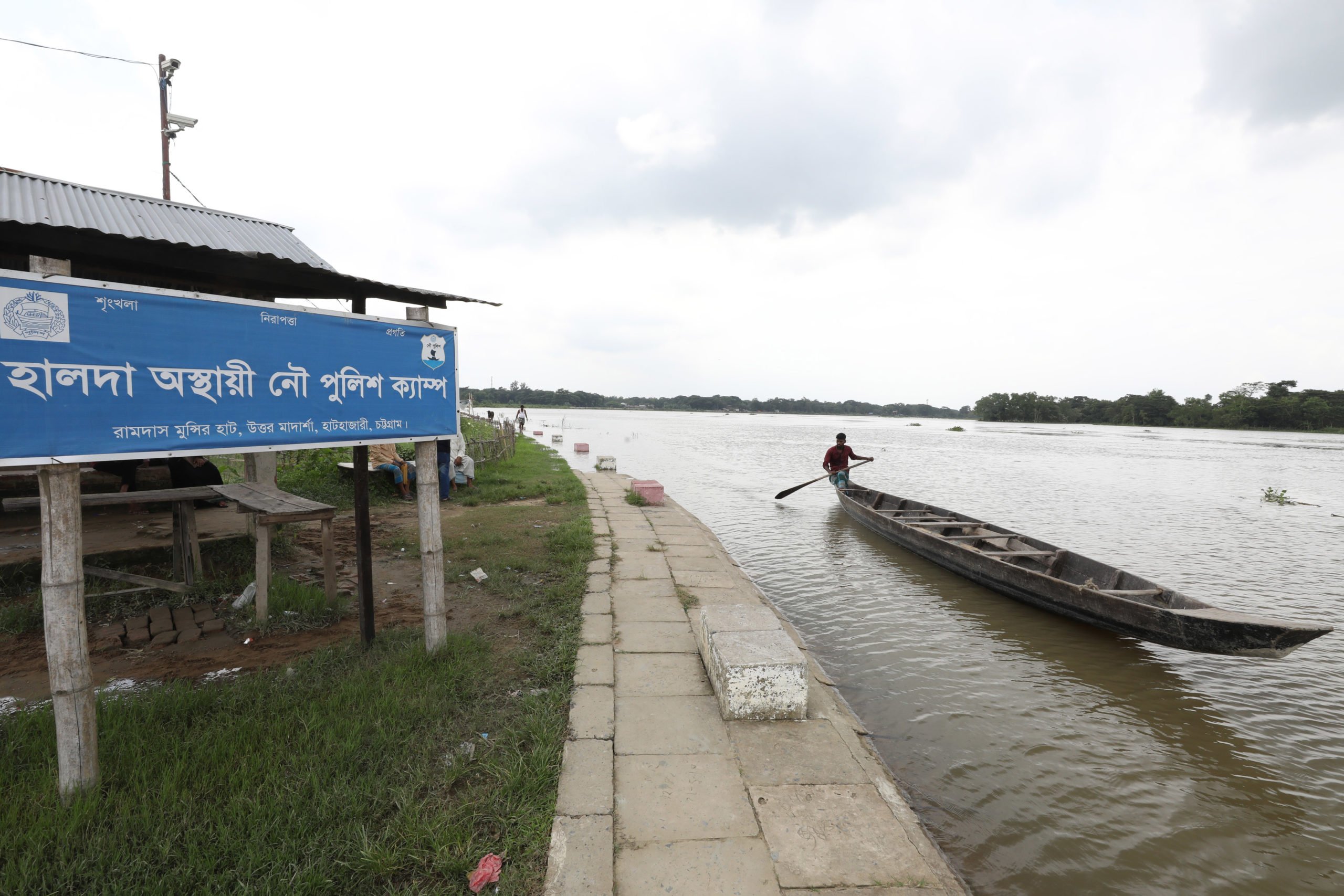 The authorities are also trying to conserve the remaining oxbow bends to allow fish to breed. In 2015, the Ministry of Fisheries and Animal Resources decided to restore the Garduara oxbow bend of the Halda, and maintain the other bends intact.

Experts such as Kibria and Ainun Nishat, a professor emeritus at Brac University in Bangladesh, also recommend removing sluice gates and dams to restore the natural flow of the river.

According to Kibria, a total fishing ban on the Halda River has created an imbalance in the fish populations.

The conservation plan is targeted at only four carp fish species: Cirrhinus cirrhosus, Labeo calbasu, Catla catla and Labeo rohita. Fishers collect fertilised eggs from these four species, which are then hatched into fry to supply aquaculture across the country. The government imposed a total ban on fishing in the river to save breeding populations of these species.

However, Kibria said that since fishers are prevented from catching other species, which spawn multiple times a year, these species end up multiplying in greater numbers and competing for food with the species that breed only once a year. He suggests adopting community-based fishing management instead of a blanket ban, allowing fishers to catch the more frequently breeding species for the balance of the ecosystem.

Farhana Lovely, Chattogram district fisheries officer, told The Third Pole that “the government banned fishing in the Halda River to save the brood fishes of the carp species in the river. If the absence of catching other fish creates an imbalance and impact on the food chain, there needs to be further study of the fishing ban to determine whether it has caused any imbalance.”

However for the time being, “if we allow the fishermen to catch any fish, they will catch all kinds of fish, including brood fish,” she said. “Monitoring whether the fishermen are catching only non-targeted fish or the brood fish of the four carp species would be difficult.”

Sunil Das says that he dreams of returning to the profession of his ancestors rather than having to leave and compete for work in cities. “If we were allowed, I would return to Halda with my net; it has provided for my family for generations.” He still hopes everything will return to “normal” soon.

In Bangladesh, a community lives and dies on boats

Best of 2020: The forgotten fishers of Bangladesh