Sarun Nong, a fisher on Koh Krabey, a small island in Cambodia’s Tonle Sap lake, takes another look at the fishing net in front of him. It contains only small fish, and too few of them to make ends meet.

For fishers like Sarun who depend on Tonle Sap lake for their livelihoods, almost every day this rainy season has been a disappointment. Just like last year and the year before that, water levels on the lake were much lower than they should have been at the height of the rainy season this October. For the fishers, low water levels mean fewer fish migrating to their section of the lake and more challenges in growing crops, which rely on the nutrients from floodwaters.

“We have expenses for the fishing net and the boat. If it goes on like this we only lose more money,” says Sarun, as his children pick a few fish from the net.

Tonle Sap, the largest lake in Southeast Asia, was long known as one of the most productive fisheries in the world. But climate change, unsustainable and illegal fishing and the proliferation of hydropower dams on rivers that feed Tonle Sap threaten the livelihoods of over one million Cambodians who depend on the lake. This year, things have been even worse than previous years, with water levels around three metres lower than in 2018 by mid-October.

The lifeline of Tonle Sap’s floods

Each rainy season, the flow of Cambodia’s Tonle Sap River reverses. The monsoon rains increase the water flow on the Mekong, Southeast Asia’s longest river which flows through China, Myanmar, Thailand, Laos and Cambodia, where it meets the Tonle Sap River. Instead of flowing to the sea, the Tonle Sap River changes course in the rainy season. Then, Tonle Sap lake functions as a massive basin for the Mekong River, expanding to six or seven times its dry season extent, flooding farmland and forests.

Through this process, agricultural land is fertilised and irrigated, while flooded forests provide ideal breeding grounds for fish that migrate from the Mekong River to the lake in massive numbers. At the end of the wet season, in mid-November, the Tonle Sap River reverses course again, and the floodwaters empty into the Mekong Delta in Vietnam, and on into the South China Sea.

But this year, much of the land remained dry. “We had the same situation last year. In the past the land would always flood. It’s very healthy for the soil if the water covers the land,” says Yin Sela, a farmer who lives on the edge of the lake a few kilometres outside of Kampong Chhnang city.

Last year Yin had to wait until November before the floods arrived. He worries that the floods may not come at all this year. “It’s really impacting my family. I can still grow some crops without the flooding, but the amount will be less and the quality will be lower. And less harvest means less income.”

Climate change, which causes longer periods of drought through rapid evaporation and disrupted circulation patterns, has been at the forefront of Tonle Sap’s problems. Brian Eyler of the US-based research institute the Stimson Center says that precipitation over the past three years in the Mekong region, specifically that which normally occurs during the wet season, has been “anomalously low”.

Another threat comes from hydropower dams. There are over 100 hydropower dams on the Mekong River and its tributaries, blocking water that otherwise would flow downstream.

“We’ve learned that 2020 was the lowest flow year for the Mekong across a 110-year period of data collection. 2021 looks to be a repeat performance of what happened last year,” Eyler explains.

Om Savath, executive director of the Fisheries Action Coalition Team, a Cambodian coalition of NGOs working on fisheries and environmental issues around Tonle Sap lake, points to similar causes. “The rainy season and the wet season have changed due to climate change, and that’s causing the water levels to drop. And the hydropower dams upstream block lots of water.”

According to the Stimson Center, there are over 100 hydropower dams on the mainstream of the Mekong River and its tributaries, mostly in Laos and China. China, which does not share regular operational data with downstream countries, has 11 active hydropower dams on the upper Mekong mainstream, where it is known as the Lancang. There are two operational mainstream dams on the Mekong in Laos, upstream from Cambodia, and seven more in different stages of planning and development, most with at least some involvement from Chinese companies in development or construction.

“We’ve learned that dams [on the upstream Mekong] are being operated the same way during low flow as they are during high precipitation years. That… is exacerbating conditions downstream much more than those restrictions or releases would impact the Mekong and Tonle Sap during high rainfall years,” says Eyler.

At the lakeside, areas of land and forest that should be underwater were still dry in mid-October. With each passing day farmers and fishers lose hope that this will change this year.

In Trodouk, a village on an island in Tonle Sap, village chief Yim Samol spoke with The Third Pole in his house. In a normal rainy season, his and other houses in Trodouk, all of them built on high stilts, would be surrounded by water. But this year the ground is still walkable.

“Before 2015 the water would always rise. It would be impossible to sit underneath the house. But now the water is lower and lower,” Yim says. The forest near the village is no longer flooding, meaning a local breeding ground for fish has been lost.

“And it’s not only fish that disappear, there’s also less other wildlife. We always had big birds flying around, but they don’t come here any more,” Yim says. 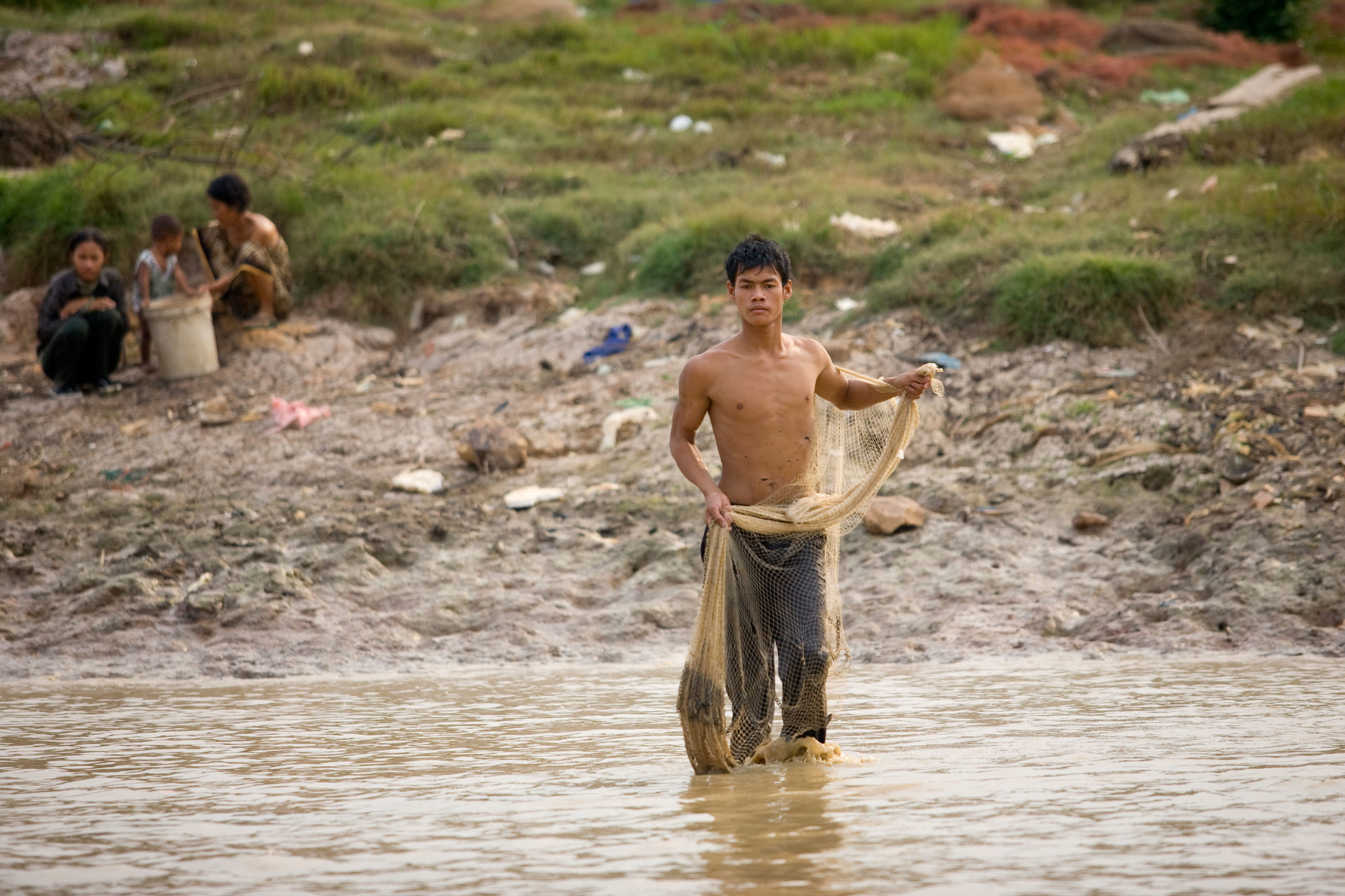 As well as changing water levels, hydropower dams upstream have affected the ecology of the Mekong system. According to the Mekong River Commission, only 16% of the sediment that is deposited in the Lower Mekong basin, an important facet of the river’s overall ecology, now comes from China, compared with 55% historically.

“The Tonle Sap fishery will be broken and so will the food security of Cambodia,” Eyler says. “The Khmer diet relies on the Mekong’s freshwater fisheries for up to 70% of its animal protein intake. A breakdown of the Tonle Sap is going to hit the wallets and the stomachs of a large portion of Cambodia’s population.” The Mekong River Commission warned in 2018 that hydropower development could result in the biomass of fish stocks shrinking by 40-80% by 2040.

In 2020, to address public concerns about the future of the Mekong, Cambodia issued a 10-year moratorium on construction of dams on the Mekong mainstream, essentially shelving projects at Stung Treng and Sambor until 2030. Last week, those plans were put on permanent hold when the government announced it would refrain from any new hydropower projects on the mainstream. But the problems for Tonle Sap lake begin further upstream.

“The dams that have already been built need to be operated to restore more than a modicum of natural flow to the Mekong system. It is possible, although not ideal and not cheap, to engineer this solution,” Eyler says, referring to using dam operations to mimic natural flow. “China’s dams will likely never be part of that, so it will be up to the downstream countries to collaborate.”

Om Savath calls on the government to address climate change to help protect the flooding forests and ensure fish can still reach their natural breeding grounds. “Another important part is more patrolling to stop illegal fishing. If we can stop illegal fishing activities, that will help the fish to grow.”

In Trodouk, Yim Samol believes that agriculture will be the future for his villagers, instead of fishing. But only if farmers are sure to get a fair price for their products. For example, farmer Yin Sela told The Third Pole that at the moment he only receives 200 riel (USD 0.05) for 1 kilo of aubergines. “If the expenses are low, we can have a good harvest here,” Yim says. “But if it continues like this, more and more people will leave because they can’t earn enough money in the village any more.”

“If you have more water, you’ll have more fish,” Yim says. “But now it’s quiet.”

Interview: Pou Sothirak on protecting the Mekong and powering Cambodia

As dam collapses, questions about dam building spree in Lao