Editor’s note: The Madhupur tract once used to be the largest deciduous Sal forest in Bangladesh – named after the Sal tree. Over the last three decades, however, Asian Development Bank (ADB)-funded forestry sector conservation projects have contributed to deforestation, the abuse of indigenous people and land dispossession in the Madhupur National Park in northwestern Bangladesh.

Promoted as conservation projects, agroforestry and monoculture plantations have contributed to the conversion of natural forest land to commercial plantations. The introduction of alien species like the Eucalyptus and Acacia under the Social Forestry Programme has negatively impacted the ecosystem as well as food security for the indigenous people and has led to health hazards. In the past three decades, the natural forest cover has been reduced to around 18% of its previous area.

The indigenous Garo and Koch communities have borne the brunt of this. One journalist spent two weeks in Madhupur in March this year and interviewed over a dozen people, including local forest-dwellers, activists and experts for this story.

A protest ends in blood

“Such a fat pig, we have hunted today. It’ll be a feast,” one of the policemen said.

The forest guards and policemen in the van laughed.

Utpal Nokrek recalled the day when he, as an 18-year-old student, lay on the deck of that vehicle, bleeding profusely from his back where a bullet was lodged. 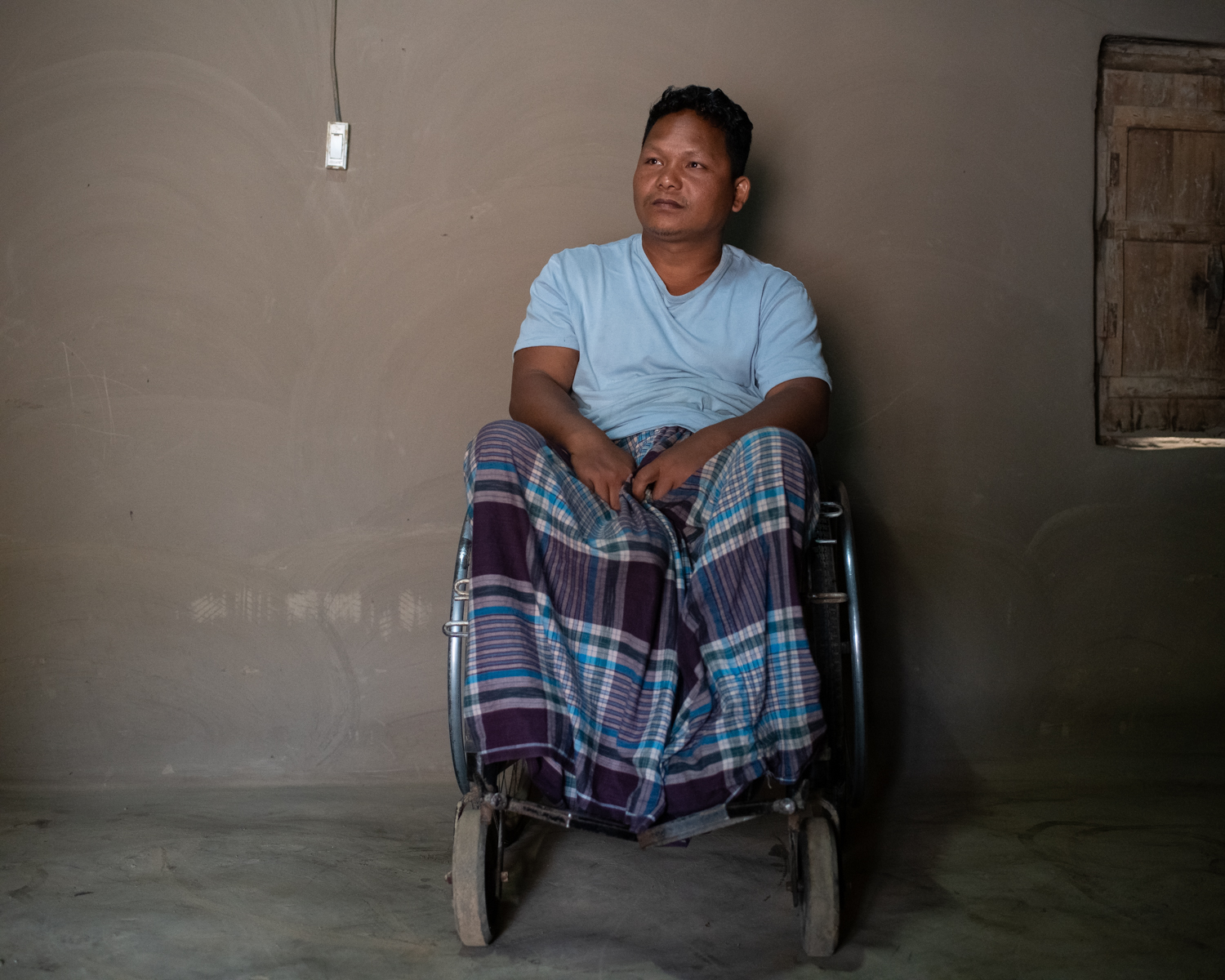 Utpal Nokrek in his house. Then a 17-year-old student, the bullet which hit paralysed him for life [image by: Prakash Bhuyan]

“They threw me inside the van like a rice sack. I felt a sharp pinching pain in my back. I thought I was going to die,” he told The Third Pole in March 2020, 16 years after the horrific episode that changed his life.

On January 3, 2004, hundreds of protestors had gathered near Jalabadh in the Madhupur forest of Bangladesh, 125 kilometres away from the capital city of Dhaka, to protest the construction of a wall.

Most of them were from the Garo and Koch indigenous communities of Bangladesh. If constructed, the wall would have spelt an end to their free access to the forest which has been their ancestral home for centuries. They call the forest “Abima” meaning ‘the mother of all lands’ in the Garo dialect. 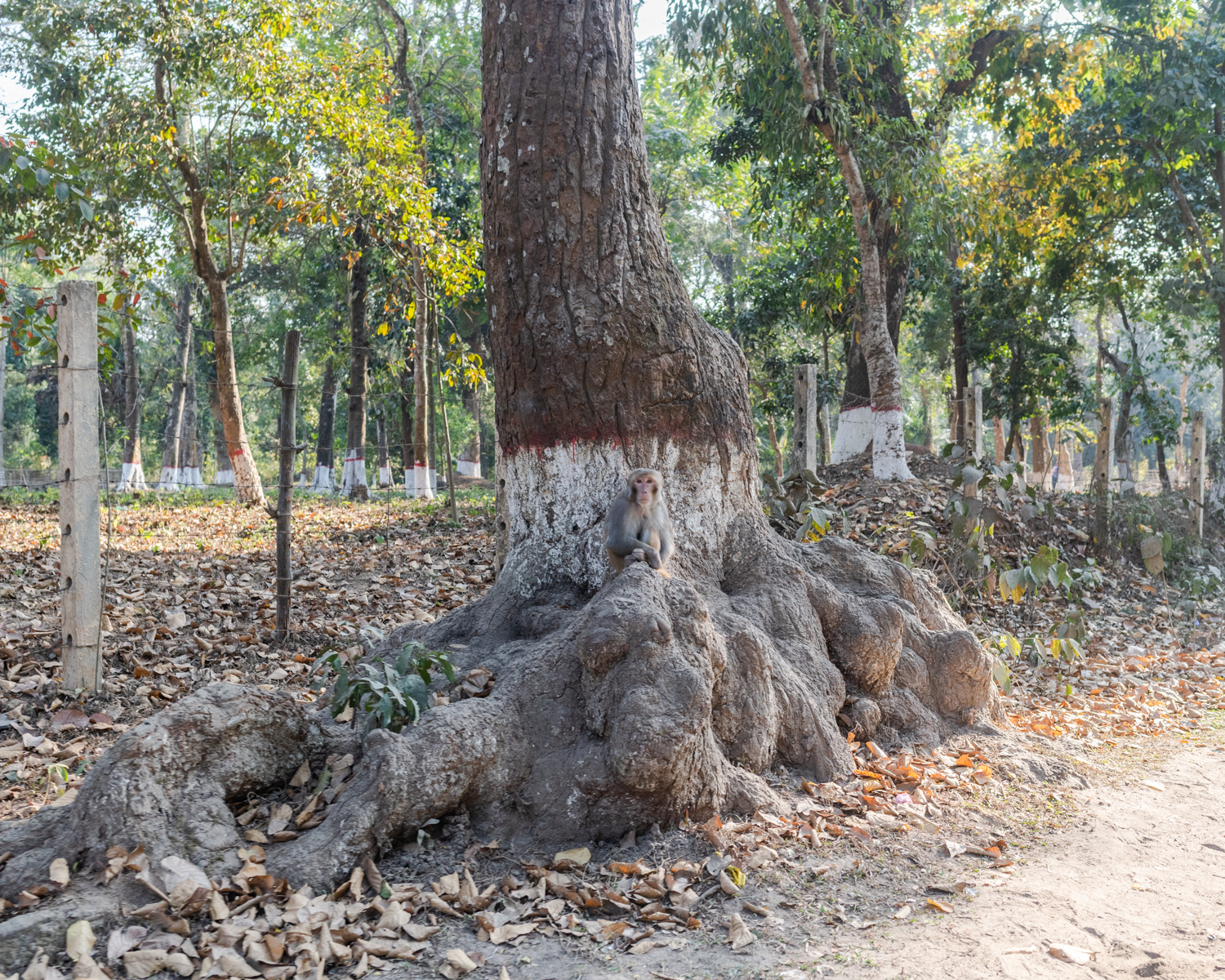 A langur sits on the root of an old tree near the Madhupur Tangail Highway which runs through the Modhupur Forest. Behind the barbed wire fence is the Firing Range of Bangladesh Air force that was set up in 1978 on 320 acres of Forestland [image by: Prakash Bhuyan]

As part of the plan to make an eco-park in the Madhupur forest, the FDB planned to construct a 10-foot (3 metres) high and 61,000-foot (18,590 metre) long wall surrounding 3,000 acres of forest land to protect the animals and forest resources of the park. If constructed, the wall will isolate the residents of the seven villages, who see this project as an attempt to restrict their free movement in the forest they consider as their ancestral land.

Utpal’s village, Joynagacha, is inside the Madhupur forest, where electricity connections are still a dream. 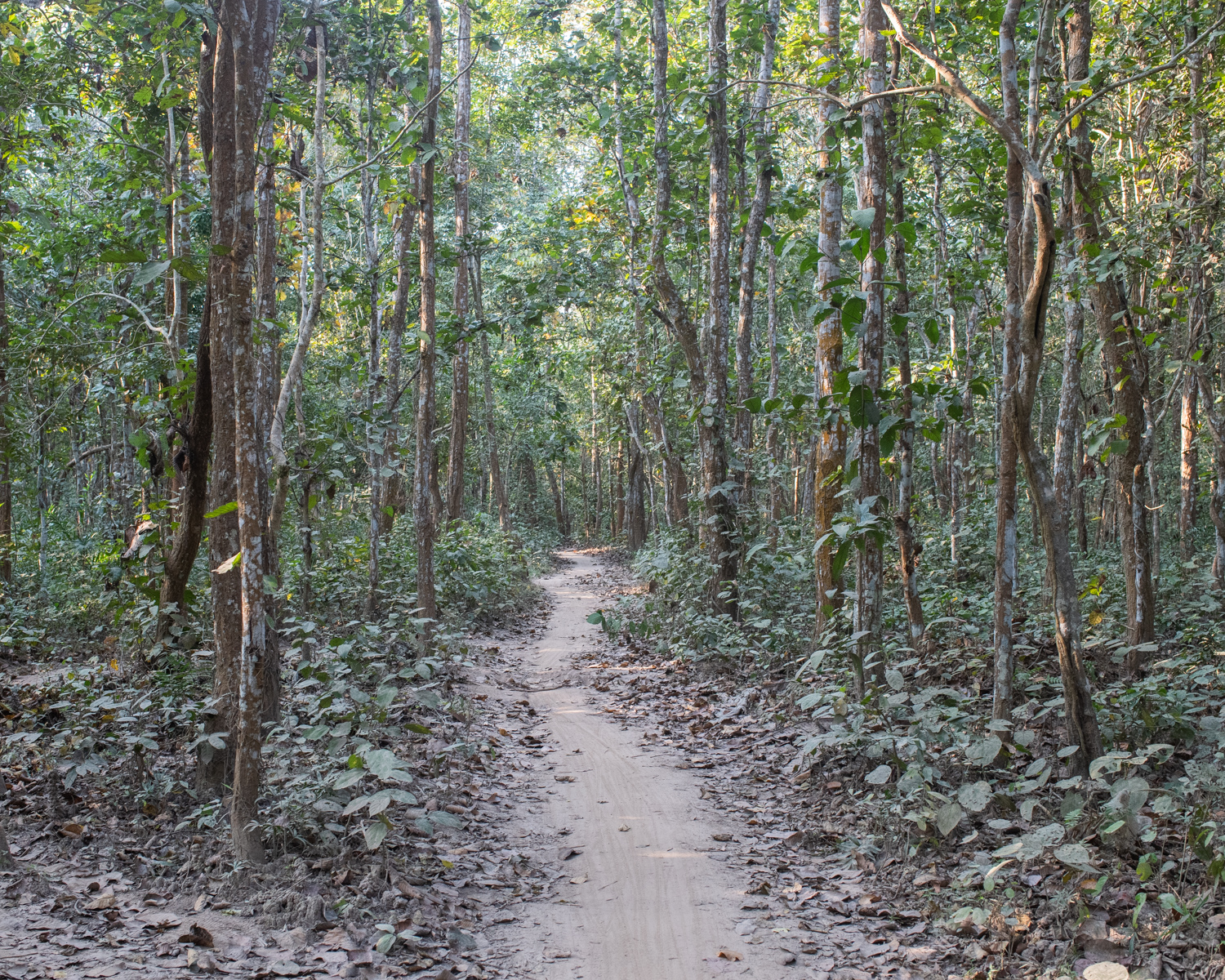 Once the largest deciduous Sal (Shorea robusta) forest in Bangladesh covering 3,826 hectares in 1962, Madhupur has been reduced to 600 hectares in 2003. A large range of wildlife species (e.g. tiger, leopard, elephant, sloth bear, and spotted deer) have become extinct [image by: Prakash Bhuyan]

28-year-old Piren Snal died on the spot. He was the sole bread earner of Nejen Nokrek’s family who lived in Joynagaccha, another village inside Madhupur forest.

More than 20 were injured, including Utpal. By the time the bullet was removed from his back, it had severed his spinal cord, leaving him paralysed waist down.

The forest department filed about 3,700 cases against several people, including the dead man, who took part in the protest, charging them with obstruction of duty.

Remembered as a martyr of the eco-park movement, Snal’s death caused the government to suspend the construction of the wall indefinitely. 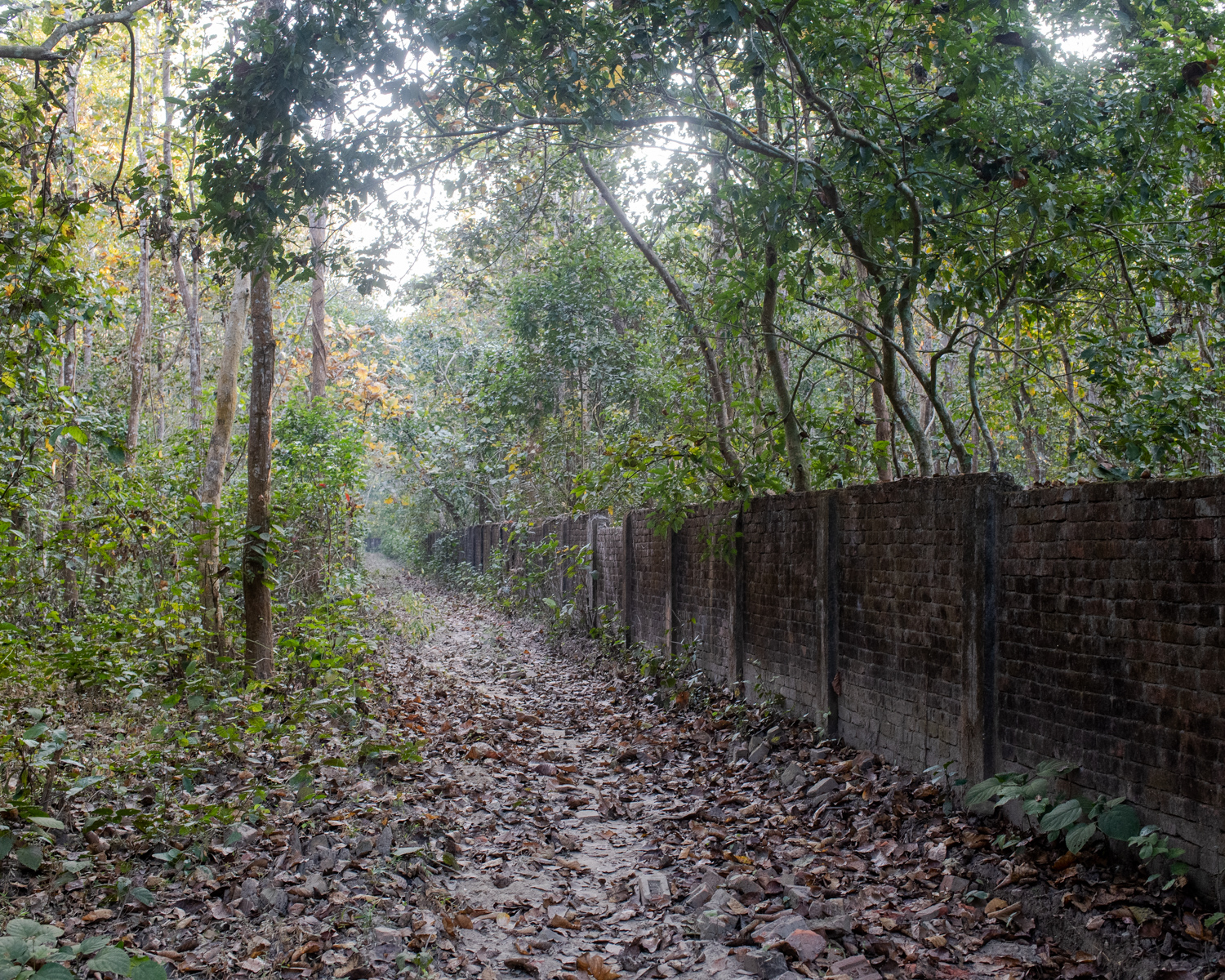 The proposed wall of the Madhupur eco park. The construction of the wall has temporarily been stopped since 2004, when the joint force of police and forest guards opened fire at a rally against the eco park in a construction site of the wall killing Piren Snal on the spot and injuring more than 20 people [image by: Prakash Bhuyan]

Deep inside the jungle, among the trees, the khimba constructed in memory of the deceased stands as a testimony of the brutality. The concrete board under the traditional dao and dhaal of the Garo people details what happened on that day.

The fight for their land is an old one, stemming from before 1971 when Bangladesh became independent of Pakistan. In 1950 the Government of Pakistan passed the Land Acquisition Act and acquired all the natural forestland as the property of the state. 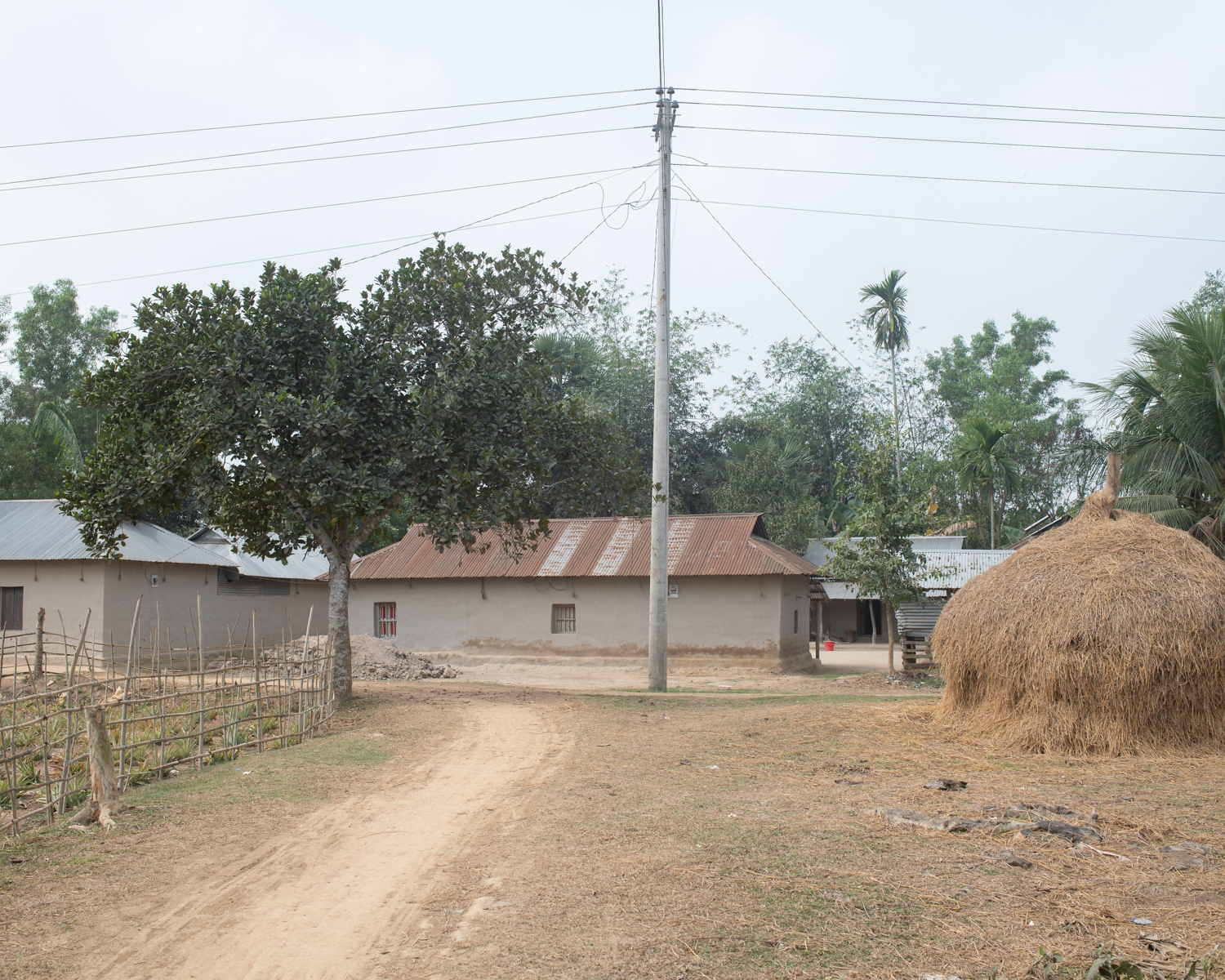 Beduria is one of the seven villages inside the Madhupur Saal forest. The people of these villages are mostly from indigenous Garo and Koch communities who have been considered as the original inhabitants of the forest for more than 200 years [image by: Prakash Bhuyan]

The ethnic minorities did not accept the Land Acquisition Act since it denied their land rights. This act initiated the formal land rights conflicts between the state and the forest dwelling citizens in the Madhupur Sal Forest. 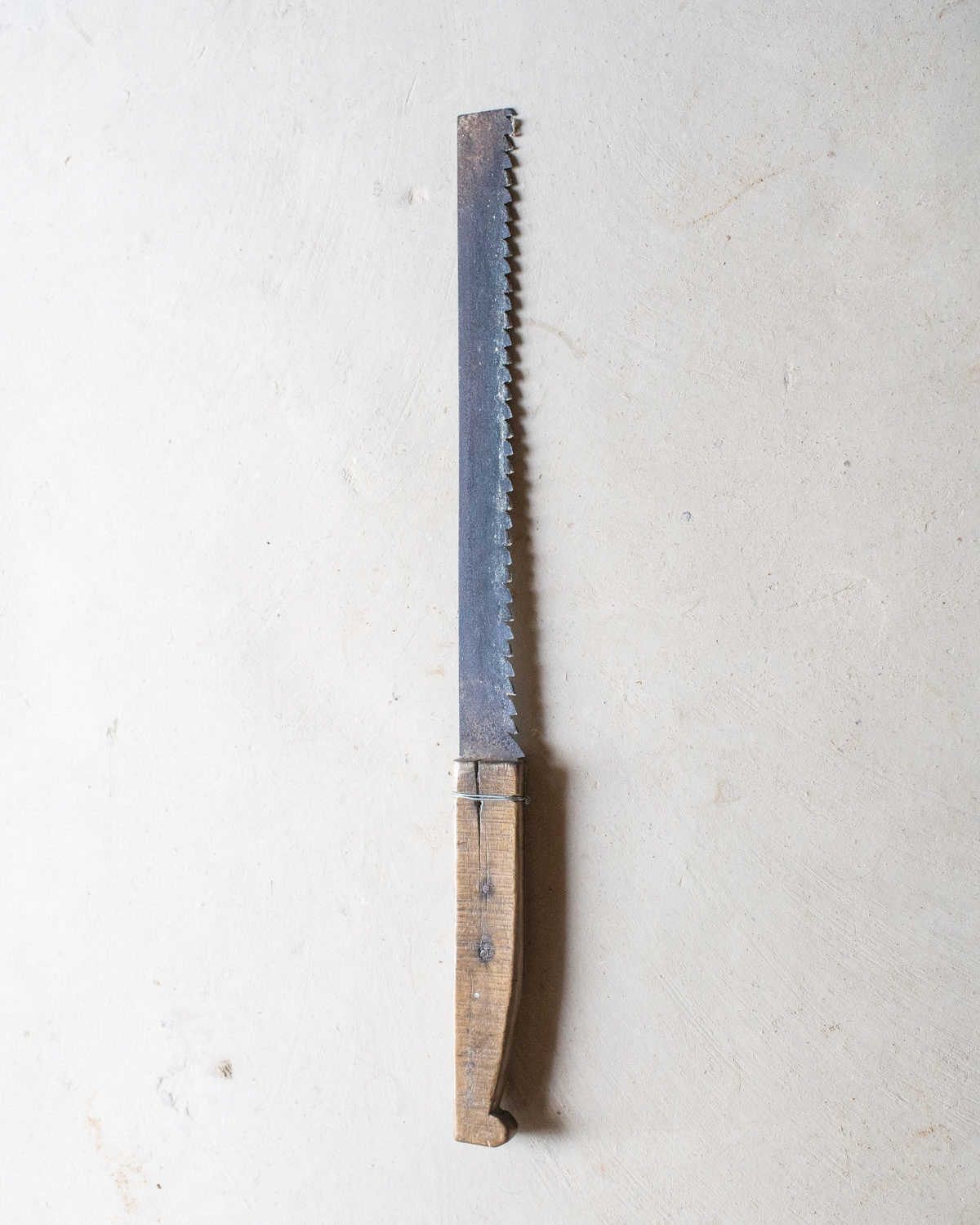 Traditional tool used by the Garo to collect firewood from the forest [image by: Prakash Bhuyan]

The Garos of Madhupur Sal forest have been struggling for the right to access the forest since 1962, when the Madhupur forest was declared a national park by the Pakistan government, which then administered the land. Eviction notices were soon sent out to the forest dwellers.

The promotion of social forestry

In the years after 1982, the Bangladesh government introduced social forestry programmes in various phases. These were aimed at improving the forest industry’s contribution to the gross domestic product and supporting local livelihood by introducing rubber plantation and agroforestry. Conservation and promotion of eco-tourism were among the other objectives.

In the mid-1980s, the forest area per capita in Bangladesh was among the lowest in Asia. To increase the production of fuelwood, the government emphasised the need for active forest resources management and woodlot tree planting in the five year development plan (1980-1985). In 1981 the first Community Forestry Project started with USD 11 million funding from the Asian Development Bank. 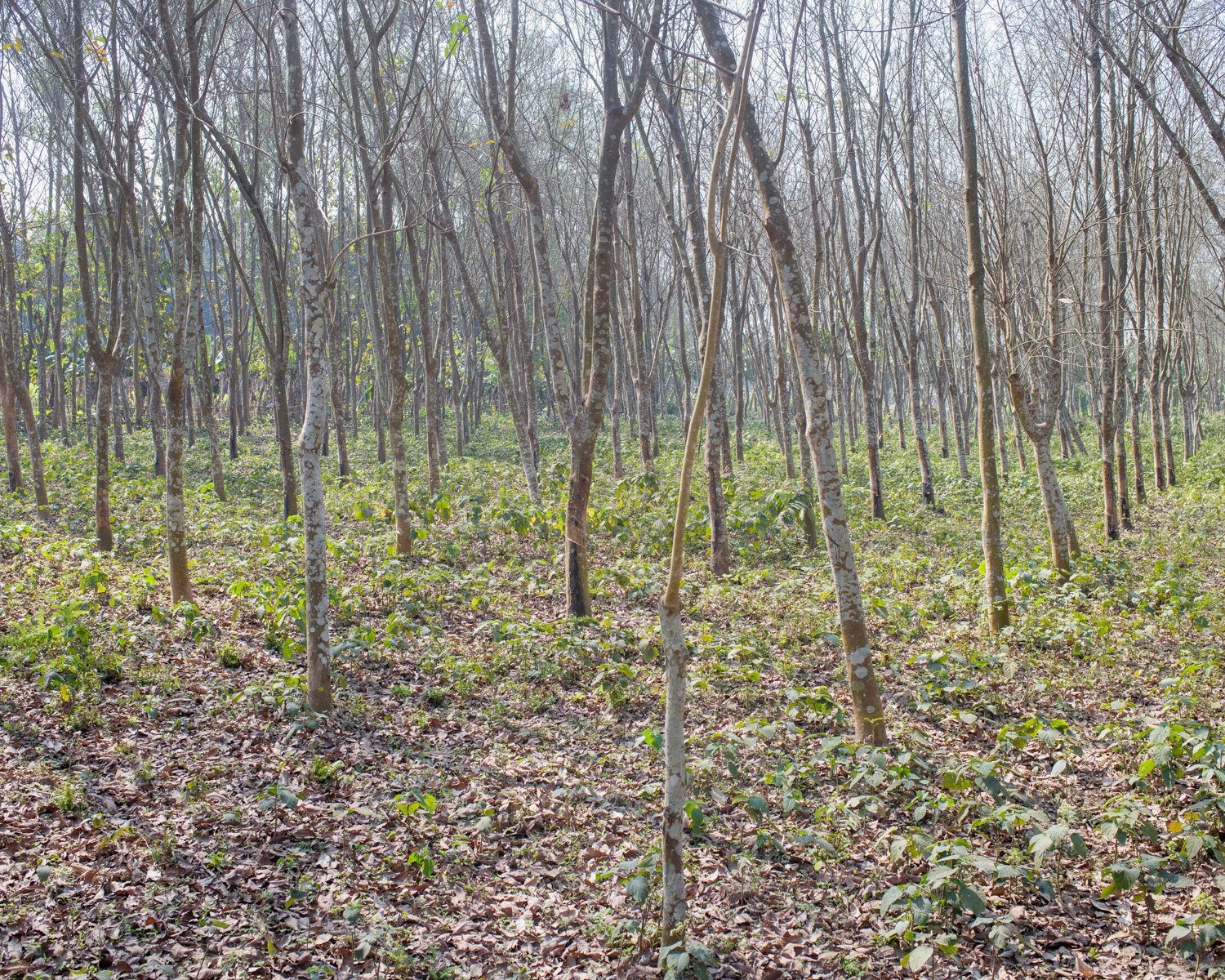 A newly finished rubber plantation. According to Forest Department records, rubber plantation was started in 1986 on 14,993.6 acres to improve the income and livelihood of the local people. While the project failed to improve livelihoods it led to massive deforestation [image by: Prakash Bhuyan]

According to the local Garo people this led to the aggressive denudation and deforestation of the forest. The sal trees which are commercially valuable, were logged away to clear land for woodlot tree plantation under the Community forestry program. Research shows the decrease in forest coverage of Madhupur Garh was about 36% between the year 1975 to 1983.

Eugene Nokrek, president of the Joyenshahi Adivasi Development Council, a civil society body of the ethnic people in Madhupur, said that instead, the social forestry programmes have destroyed the natural sal forest.

In 2001, the Asian Development Bank, which funded most of these projects along with the World Bank and international financial institutions, noted the significant problems in the project evaluation reports.
The current set of forest laws in Bangladesh has put the forest dwelling ethnic Garos at a disadvantage. 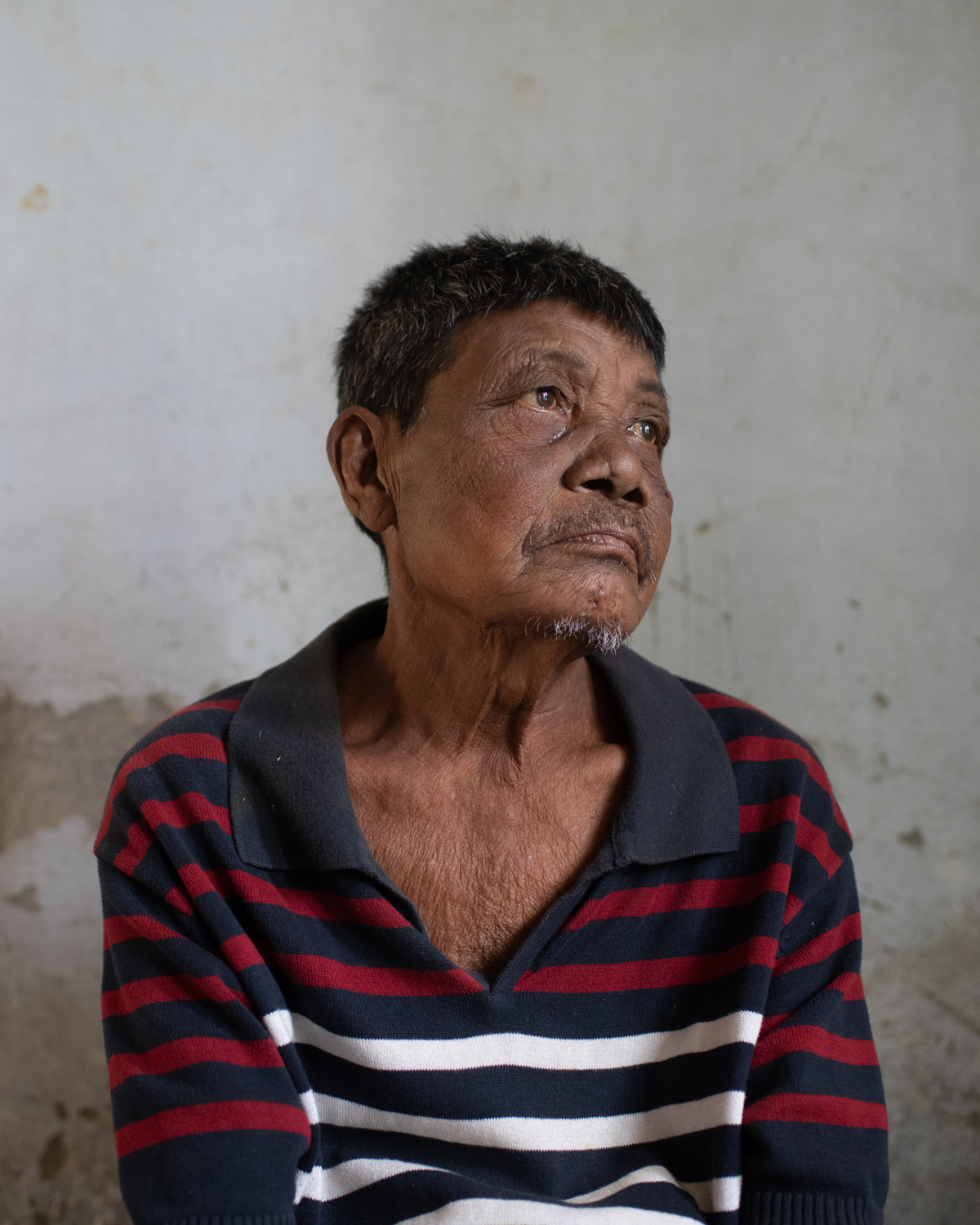 Nejen Nokrek (70), the ailing father of Piren Snal, has little hope for justice, but will not give up [image by: Prakash Bhuyan]

The now 70-year-old Nejen Nokrek holds no hope to get justice for the death of his son, Piren Snal given the attitude of the police and local administration. Fighting for his motherland left Utpal on a wheelchair, struggling to earn a reasonable income.

Both were resigned to their fate but not helpless before it. The struggle for Madhupur will go on, they said.

Note: The author tried repeatedly to reach out to the Forest Department during his stint in Madhupur but received no response. This report will be updated if and when a response is received.