This is the first in a two-part series on livelihoods and conflict along the Mahakali river.

Bishnu Bahadur Budha – a resident of Bhimdatta Municipality-12, in western Nepal bordering India – manages the expenses of his eight-member family by processing and selling stones, gravel and sand. The riverbed of the Mahakali is the main source of income to pay for the expenses of his aged parents and school-going children. The river causes panic when it swells unexpectedly, but they are still dependent on it for almost nine months (September to May) a year.

“The task of collecting pebbles and sand is not easy,” Budha says. “But I don’t have to go overseas to support my family. It gives a good income 7-8 months a year.”

The family of Jasma Sona in the same area also depends on the Mahakali, the transboundary river that marks the border between western Nepal and the state of Uttarakhand in India. Her house is on the bank of the river. During the rainy season, there are many nights she cannot sleep for fear that the the river will flood and enter her home. “We face difficult situations. We find no place to keep ourselves safe,” she said as she sieved sand in the last week of December. “This is the season of exploitation of stones, pebbles, and sands. It has created a job (for us). We have been making our livelihood by selling these things.”

There are many who work on this trade alongside other work. The Sona community is a traditional fishing community, but they also collect construction material manually.

This, though, is now changing as local governments have started hiring contractors for the jobs of collecting stones, pebbles and sand, as also for fishing. For the local community, loss of income has been followed by rampant criminality and over-exploitation.

In 2012 Bishnudatta Joshi of Bhujela was flooded out of his house. The Nepal Army, Armed Police Force and Nepal Police had shifted the people when the river started rising, but livestock and foodgrain could not be saved. Since then he has been living in a hut. His new house is under-construction.

A-four-lane bridge is going to be built over the Mahakali. Joshi received money as compensation. Pointing to an area on the flowing river, he said, “That is where my field used to be. Now river water flows over it. The river destroyed seven kattha (a kattha is a local unit of measurement, approximately 338.63 square metres) of my field. This is not an isolated case. Every one in my area has lost something.”

His neighbour, Dhananjaya Joshi, lost 6 kattha of land to the river. The river from which they had received their livelihood had consumed their earnings.

Under the new Nepali Constitution promulgated in 2015, local governments have the authority to collect and sell resources from a river flowing through the area under their jurisdiction. They need to give a certain amount of revenue to the provincial government. Many local governments have outsourced the collection to contractors, and this forms the main source of income for these governments.

The Mahakali municipality has announced a call for tender, while the Bhimdatta municipality has already hired contractors. It has given the authority to Bhawani Construction to collect stones, pebbles and sand, and to collect revenues from others who collect the river’s resources. For this purpose, the municipality has opened sites in Bhujela, Airi and Piparaiya of Ward No 11, 12 and 13 respectively.

According to ‘Environment Conservation Regulation, 1997’ stones, pebbles and sand can be collected from the river only after an Initial Environmental Examination (IEE) is carried out. Bhimdatta Municipality has prepared a report. The regulation directs that up to 250 cubic metres of sand and pebbles can be collected every day once the IEE report is prepared. While collecting materials no machines like excavators can be used; they should be collected manually.

It needs an Environmental Impact Assessment (EIA) report to collect more than 250 cubic metres of sand and pebbles. Neither Bhimdatta nor Mahakali municipality has produced such a report. Himalaya Singh Airi, an engineer working with Bhimdatta municipality, admitted that river resources have been exploited without an EIA report.

The company hired by the municipality has not limited itself to collecting 250 cubic metres of river resources. Airi says such a standard cannot be implemented in the Mahakali River. “The contractor has agreed to pay NPR 44.4 million (USD 386,000) to the municipality as per the agreement, and one doesn’t bother to pay such a huge amount just to collect NPR 5.2 million (USD 45,210),” he said. “Not all the provisions of the regulation can be implemented.”

Without an EIA, there is no understanding of the extent to which sand, stone and other resources can be extracted without jeopardising the river itself. No one has monitored the work to see what is collected every day, how it is collected, what machines or equipment have been used, what measures have been taken to minimise risks for the labourers.

Himal Chand, ward chair of Ward No. 11 of Bhimdatta municipality says that policy needs to be formulated for multiple uses of the river, and the municipality should move ahead accordingly.

The IEE report allows only manual extraction, but contractors have been using excavators. The District Police Office (DPO) seized three excavators and arrested the drivers. Superintendent of Police Dinesh Acharya – who headed DPO Kanchanpur at that time – said that excavators were seized for illegally exploiting river resources in Piparaiya Ghat of Ward No. 13 of Bhimdatta municipality, and were released on the condition that there would not be a repeat. Locals say the excavators are again being used in the same place for the same jobs.

“We are new [municipality]. We are not able to follow all the standards and are learning slowly,” he said, “We do have a report prepared by Bhimdatta municipality. It works for both sides of the river. Why prepare another report?”

The river is changing

River resources have been exploited on both banks, due to which the banks are deepening, while islands are popping up in the middle channel. Much of the water now flows along the banks. 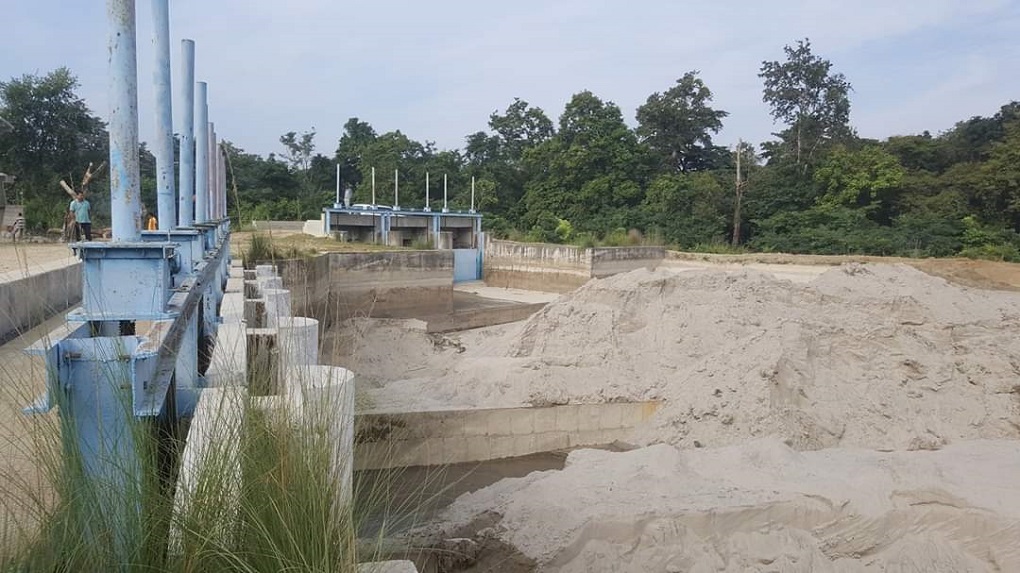 A new bridge is being built across the Mahakali [Image by: Ram Singh Dhami]Kishor Raj Pandey, the deputy contract manager of a four-lane bridge construction project over the river, said that deepening river banks can increase the risk of flooding. According to him the river banks have become five metres deeper than the middle portion of the river.

“River banks are getting deeper due to exploiting river resources from the side, due to which there is a risk of river waters entering into settlements in the summer season,” he said.

Now, to build the bridge, the Mahakali is being diverted to the middle over a two-kilometre stretch.

As locals lose their livelihood, and the environment is being critically degraded, the government is now looking towards different types of environmental exploitation.

Lekhraj Bhatta, the Minister for Industry, Commerce and Supply – says that the government is doing groundwork for the study river resources’ exploitation. Till now the river is the main source of construction materials, and the government wants to divert peoples’ attention towards mines, he says. The Department of Mines and Geology has identified 91 locations in 14 districts to get construction materials like stones, pebbles and sand. Bhatta said the Ministry of Industry, Commerce, and Supply is preparing the tender calls for those locations.

This work was supported by The Third Pole-Oxfam Shared Water Media Grants as part of the Transboundary Rivers of South Asia (TROSA) project funded by the Government of Sweden. Views expressed are solely those of the author

Tomorrow: As jobs disappear, conflict rises along the Mahakali

Architects must lower the carbon footprint in ‘whatever they do’