For three weeks, thousands of people from the indigenous Mising community have been protesting outside the deputy commissioner’s office in Tinsukia town of Assam, demanding that the government finds them a new place to live.

On the southern bank of the Brahmaputra, residents of two villages Laika and Dodhia within the boundaries of the Dibru-Saikhowa National Park continue to live in limbo as the government won’t let them live inside the park and can’t find them a new place outside.

With women taking the lead, residents of Laika and Dodhia demonstrate outside the office of the deputy commissioner in Tinsukia [Image by: Gaurav Padun]

The indigenous Misings have been left without a permanent settlement or access to any facilities for over 20 years. They are victims of forest conservation policies – while at the same time nearby forest areas are being opened up for industry, coal mining and oil exploration.

About 2,000 men, women and children representing every household of Laika and Dodhia villages have staged their demonstrations since 21 December. They have been supported through biting cold winter nights by Takam Mising Porin Kebang (All Mising Students Union – TMPK) of Tinsukia along with Mising Mimang Kebang (Mising Sangram Samiti), Takam Mising Mime Kebang and other organisations.

The National Park is bounded by the Brahmaputra and Lohit rivers in the north and the hills of Arunachal Pradesh and the Dibru river in the south. Laika and Dodhia villages have a population of about 12,000 people, mostly from the Mising community who migrated from Dhemaji during the Assam earthquake of 1950. This disaster rendered them homeless due to the shifting course of the Brahmaputra river.

While people were allocated land within the forest in the mid-1950s, the area became the Dibru Saikhowa Wildlife Sanctuary in 1986 and then was designated a national park in 1999. 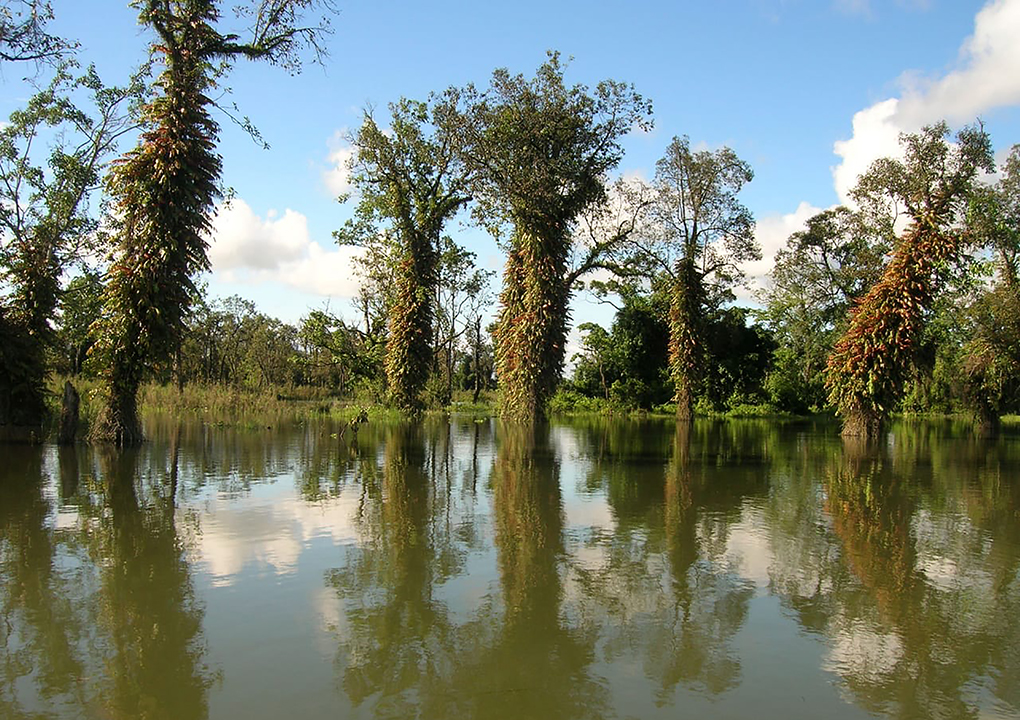 Before setting up the national park, central government authorities came to do a survey to ensure that there was no human dwelling located in the forest. The locals claim that the authorities were misled by the Assam government, who convinced them no one lived in the area any more.

What came as an honour for the state became an open wound for people who lived in the forest. The Indian Wildlife Act, 1972, states that human settlements are not permissible within the premises of a national park.

The government did not immediately withdraw facilities or ask people to evacuate. But local people experienced gradual neglect, with roads not being built after floods and people told that they would be provided with boats to cross the river. “Doctors were reluctant to turn up to their duties because of lack of communication and security in the forests. In the government schools, when teachers retired or took a transfer, new teachers were not reappointed,” says Diganta Lagashu, 32, who was born in Laika and later shifted to Guijan 5 – a temporary government relief camp. Laika and Dodhia residents were not relocated but they were left without concrete houses and roads, electricity, educational and medical facilities.

Nirmala Mili, a widow for the last four years, recalls her husband being carried in a bamboo stretcher, then in a boat to be treated in Dibrugarh. Her husband died of kidney failure. 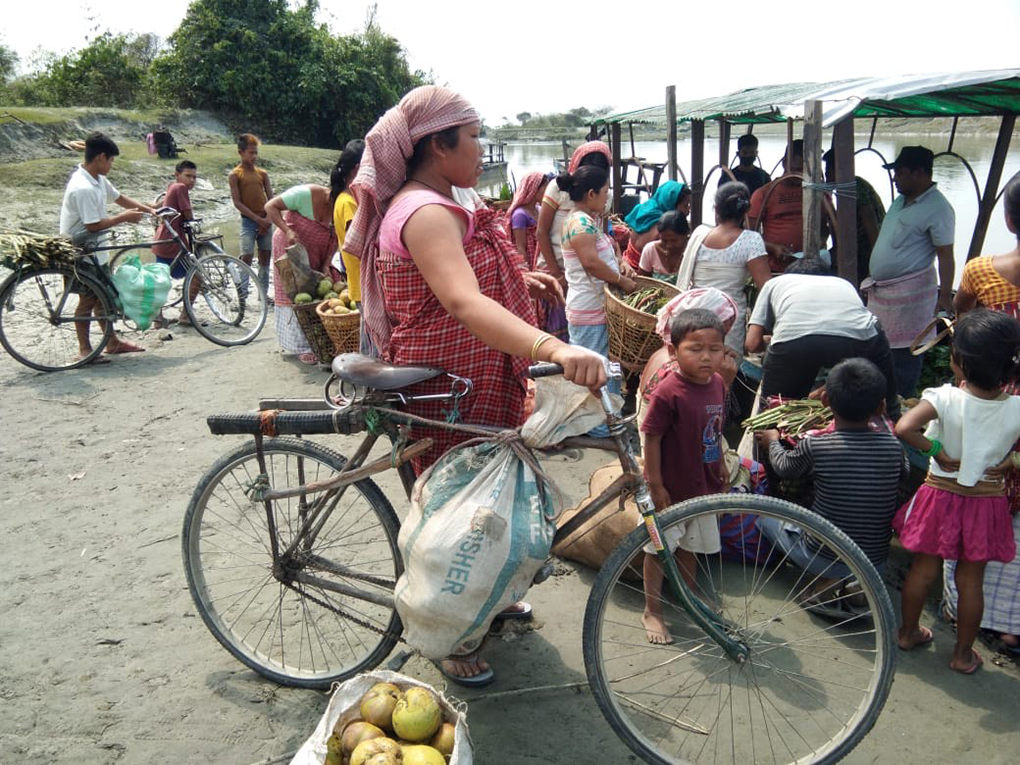 Residents of Laika and Dodhia who have lost their land to erosion due to recurrent floods in recent years have been forced to move back to the core zone of the national park. Phuleshwari Neog, 30, a mother of two, says, “This year nothing is left. Floods have taken away everything. People have gone further inside the forest.” This has damaged biodiversity of the core zone. For this reason, people are often seen as illegal encroachers by the outside world. The inhabitants themselves are aware of the adverse effects of their movement. They claim that unless they are properly relocated this problem will persist.

“Earlier we had our crops to live upon, this time our arable land has eroded. The swine flu has affected us this year. The Baghjan fire has quelled our fishing resources. Our main concern is survival now,” says Gitanjali Lagashu, a resident.

People affected by the flood were provided temporary shelter a few years ago in a locality called Guijan 5 beyond the Dibang river. Lack of space forced them to spill out of the rehabilitation site, leading to disputes with original residents.

A number of places have been proposed as new settlements. “There is a surveyed village called Lezaihula and a Mising village called Janomukh, where these people can be safely settled which is the responsibility of the District Forest Officer (DFO),” says environmental activist Niranta Gohain. “There is also a tract of reserve forest land in Digboi division in Lakhipothar where these people from Laika Dodhia can be rehabilitated.” This land has so far not been allocated because it is reserve forest land and because the locals are against the relocation. Officials mention other potential relocation sites, but nothing has worked yet.

Gaurav Padun, secretary of TMPK, says, “For decades we have survived in flood affected areas. Now we do not want to be treated as a burden to get rid of. We want land that is suitable for us.”

Though the people want to be rehabilitated at the earliest, they want to be resettled together as a community, believing their negotiating strength lies in numbers. They also say if the community is scattered, it will be difficult to bring it together if a calamity befalls in future.

The Dibru Saikhowa National Park is a huge reservoir of biodiversity and natural resources. Even though indigenous population have damaged the core zone, the residents have not been relocated. Niranta Gohain believes the politicians are conspiring with the corporate sector to destroy biodiversity, so that the park is stripped of its protected status and industries and dams can come up instead. 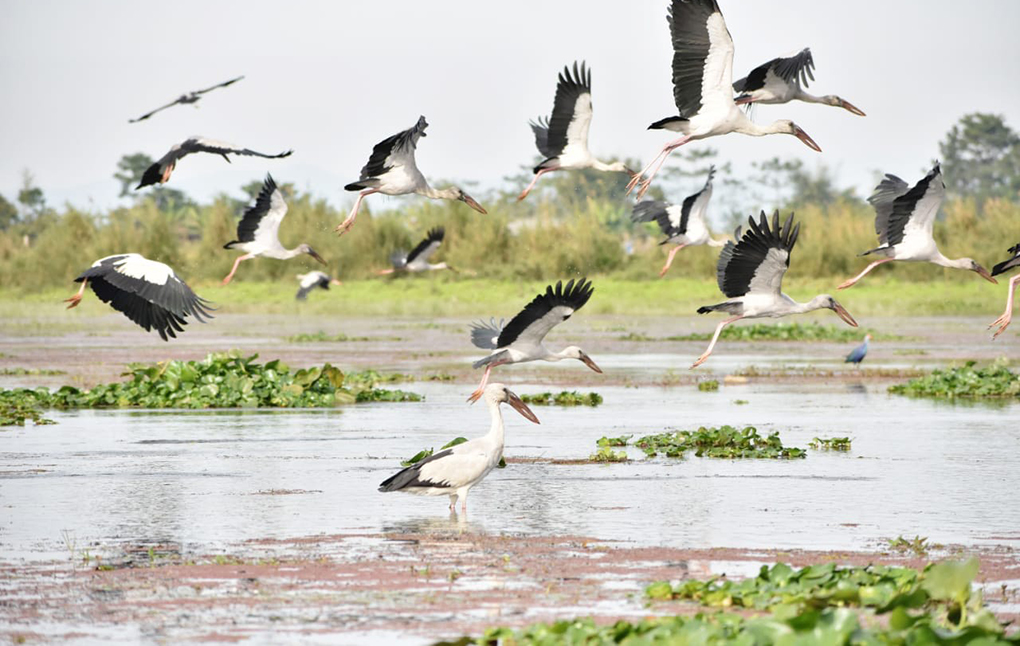 Assam and central governments have recently given no-objection certificates for oil exploration within the national park. Gohain says, “The NOCs have been attained without proper survey in a national park. The Baghjan blowout falls within 10 km.” He suspects that the people will not be rehabilitated unless the status of the national park is removed because of consistent degradation.

Before every election, the government pledges to relocate people but these promises have not been kept yet. Many opposition politicians have visited the protesting villagers to express solidarity. They are the same people to whom villagers had demonstrated their woes earlier when they were in power.

“We are neither convinced nor relieved, for previous written mandates to rehabilitate people have not yet been implemented. We aspire to continue with the movement until we are rehabilitated,” says Minturaj Morang.

Meanwhile, the residents huddle in their camp during a winter of discontent.

Photo essay: Indigenous people fight for their forest in Bangladesh