On 22 June this year, the government declared a flood alarm in the Kashmir valley, after water levels rose at Sangam in south Kashmir and Ram Munshibagh in Srinagar. While still below the level officially classified as a “flood threat”, river water flooded two colonies of more than 20 houses in the Bemina area of Srinagar. At least three villages in north Kashmir’s Baramulla district were hit by flash floods.

The rains subsided a few days later, and the floods receded, but river waters continued to run high through July. Then on 29 July, Kashmir’s Meteorological Department issued a ‘yellow warning’ after three days of incessant rainfall. “There might be chances of flash floods,” Mukhtar Ahmed, deputy director of the meteorological department in Srinagar, told The Third Pole.

In Kashmir, memories of 2014’s devastating floods loom large. As such, recent warnings have prompted questions about the efficacy of the region’s much-touted flood management plans.

In September 2014, the Kashmir valley witnessed its worst ever floods after the Jhelum River overflowed in many parts of the region. Over 300 people died and property worth billions of dollars was damaged.

Soon after the devastating floods, the central government sanctioned a plan for the comprehensive flood management of the Jhelum River and its tributaries. The project was funded through the Prime Minister’s Development Package, and divided into two phases.

INR 3.99 billion (USD 50 million) was sanctioned for the first phase, which is yet to be completed. The government claimed that this phase – which mostly involved the dredging of the river to remove sediment – would enhance the discharge carrying capacity of the Jhelum from 31,800 cusecs to 41,000 cusecs. This means that the river could accommodate almost 25% more water flowing through it without overspilling its banks.

What is a cusec?

A cusec is a measure of the volume of fluid that flows past a certain point. A shortening of “cu” from “cubic” and “sec” from “second”, it is used to indicate how many cubic feet of fluid flow past in a second. One cusec is equal to 28.32 litres per second.

The Jhelum River flows from Verinag in south Kashmir, northward through Srinagar to reach Wular Lake in north Kashmir’s Bandipora district. The river is the only drainage channel for the water that reaches it from 103 nallahs (streams) and tributaries.

According to the Irrigation and Flood Control (IF&C) Department, Kashmir, the main objective of the first phase was to remove major bottlenecks in the Jhelum River and its existing flood spill channel to deal with floods of low to moderate magnitude. The Jhelum’s flood spill channel runs from south of Srinagar to Wular Lake, and is meant to divert excess water, bypassing the city. 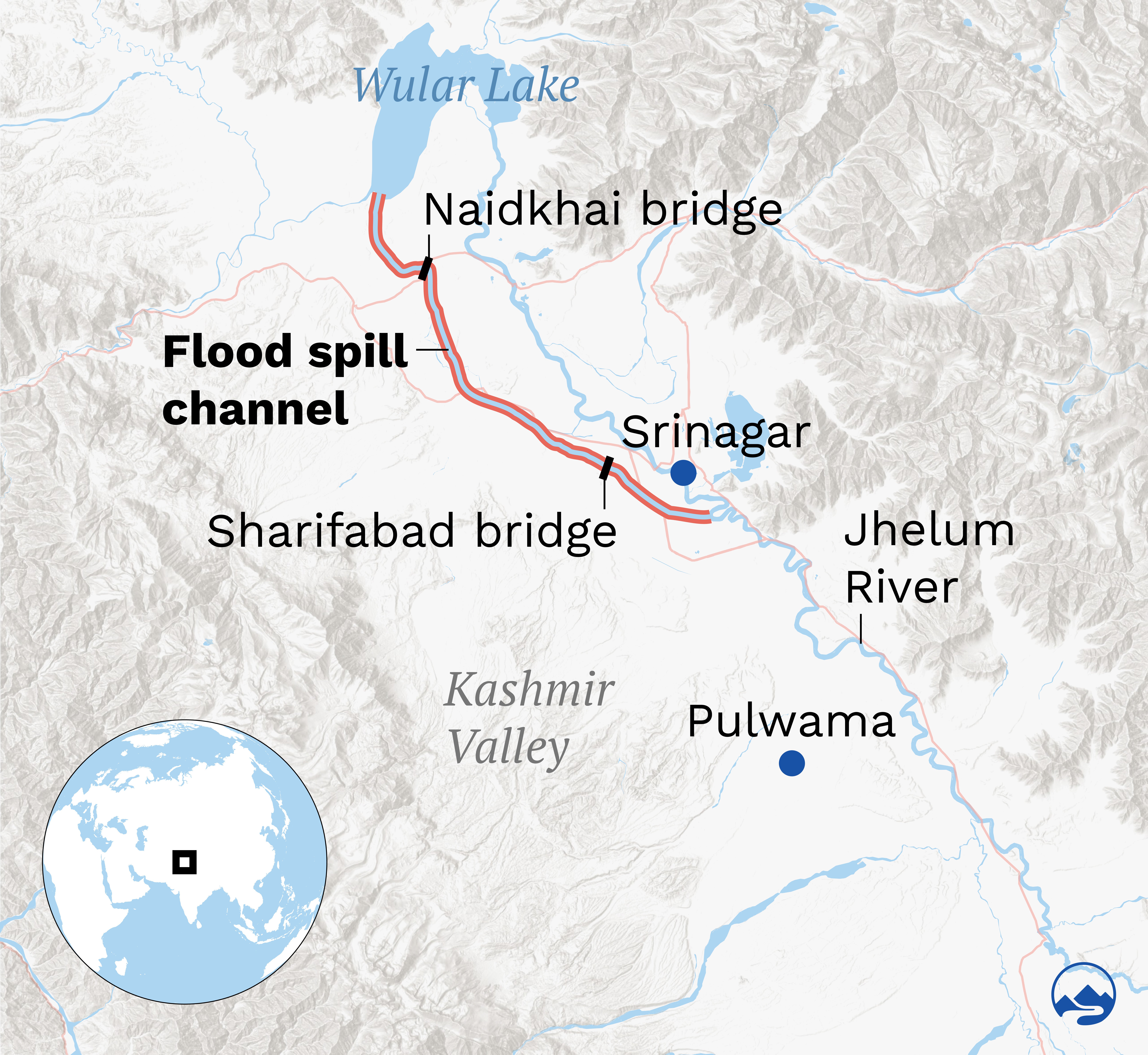 Map of the Kashmir Valley, including the flood spill channel alongside the Jhelum River. Graphic by The Third Pole.

An IF&C department official told The Third Pole that work under the first phase of the flood management plan included dredging of the flood spill channel in the Sharifabad area of Central Kashmir’s Budgam district and in north Kashmir’s Naidkhai village, to widen it and increase its carrying capacity. Two bridges were also constructed at these locations. Dredging of the Jhelum itself was done in Srinagar and Baramulla districts to enhance the carrying capacity of the river.

However, in a June 2021 report, the Comptroller and Auditor General (CAG) — an independent body under India’s Constitution, empowered to audit all receipts and expenditure of government works — criticised the IF&C department for major lapses in achieving required targets.

of a target of 142,000 cubic metres of river bed material was dredged between Khanabal and Kadalpal, according to a CAG report

In one particularly damning section on progress at two sections of the Jhelum identified for the clearing of bottlenecks, the CAG report states that only 8% of a target 1.42 lakh (142,000) cubic metres of river bed material was dredged between Khanabal and Kadalpal, and that no material was dredged from the Jhelum between Sether and Sempore, despite a target of 0.6 lakh (60,000) cubic metres.

The CAG report also highlighted financial irregularities, particularly officers signing off on amounts higher than they were authorised to do. On 25 July 2022, the High Court of Jammu & Kashmir and Ladakh also sought a response on utilisation of funds provided by the central government for the restoration project.

The first phase of the project was undertaken by the Kolkata-based company Reach Dredging Limited. The dredging was scheduled to be completed in March 2018, but the company missed several deadlines and was asked to wind up the operations by the I&FC department in April 2018. The department is yet to complete the project. 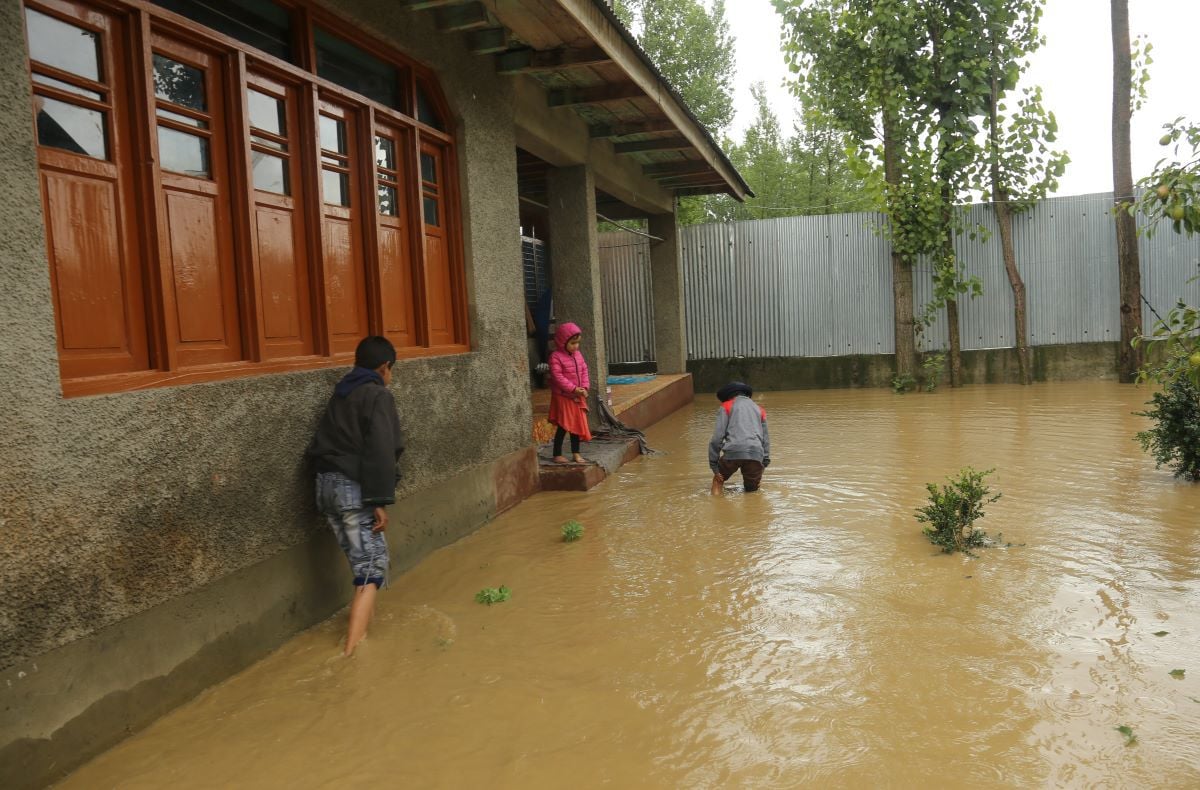 Although flood waters – such as these in Hanjewara, Baramulla – subsided after a few days in late June, people still fear floods may be around the corner (Image: Umer Asif)

“97% of the work [on the first phase] has been already completed, the remaining 3% will be completed by September 2022”, Naresh Kumar, chief engineer for the Kashmir region at I&FC department, told The Third Pole.

Other officials at the department, speaking on the condition of anonymity, told The Third Pole that deadlines were missed because of unrest in the summer of 2016 and site constraints – especially in the city portion – on dumping of the dredged-out material. Low temperatures, far below freezing, during the winter months delayed work as well, since most of the labourers came from regions in India that never experienced such cold, officials said.

The CAG report was far less forgiving, stating that the contractor failed to live up to its obligations in time management, and should have been penalised. While the report says that 98% of the total target of 7 lakh (700,000) cubic metres of river bed material was ultimately dredged, it states that “the dredging was not carried out as per the requirements fixed at six sites. In fact, 0.58 lakh cum [58,000 cubic metres] extra bed material was dredged out at three sites; on the other hand, no dredging at all was carried out at one site and at two sites less dredging was done.”

With the rain and rising river waters, questions emerge

After a few days of rain in June saw water rise to flood threat levels, local residents like Hilal Ahmad Mir, a businessman from the Karannagar area of Srinagar, expressed their frustration.

“This is total wastage of money. Where did 399 crore [3.99 billion] rupees go, if the river overflows again after a few days of rainfall?” asked Mir.

Iftikhar Ahmad Drabu, a civil engineer who has closely followed the dredging process, argues that the authorities choose the wrong reaches of the river to start the dredging.

“The dredging was done in the upper reaches — making the city [Srinagar] more vulnerable to the floods,” Drabu said. He further argued that the Jhelum needs additional channels to mitigate the danger of floods. He favoured the creation of two parallel channels to hold excess water, saying that dredging alone will not solve the problem.

Where did 399 crore [3.99 billion] rupees go, if the river overflows again after a few days of rainfall?

Questioning the claims of the government that the carrying capacity had increased, Drabu asks why the city is once again seeing the threat of floods.

Naresh Kumar of the IF&C focused instead on what the plan was supposed to achieve, rather than why the threat of floods has not seemingly receded. He told The Third Pole that the major aim in phase one of the flood management plan was to remove bottlenecks and obstructions in the flood spill channel. This, he said, was important to divert excess flood waters at Padshahi Bagh from the Jhelum River directly into Wular Lake after traversing 48 kilometres. The implication was that, while the water might still rise, the clearance of the bottlenecks would not allow this to become a danger.

Aijaz Ahmad Keen, an executive engineer at the Srinagar Irrigation and Flood Control Department, told The Third Pole: “In Phase II, the dredging will be done in lower areas to increase the outflow.”

But neither point deals with the major issue raised by the CAG report, that “the execution of the work was not as per the terms and conditions of the contract [and] would limit the efficacy of the dredging works in river Jhelum for increased flow”. The Third Pole contacted the IF&C department regarding the CAG report’s criticisms, but the department declined to comment, and declined to reveal whether they have filed a response to the report.

Nonetheless, on 8 July, the Jammu and Kashmir administration allocated INR 16.23 billion (USD 200 million) for Phase II of the flood management of Jhelum River and its tributaries.

Could the Kashmir floods have been avoided?

Kashmir counts its losses after the floods