Himanshu Pegu, a resident of Silchar in India’s northeastern Assam state, is one of many forced to live in a relief camp. The floods that hit his city on 20 June 2022 destroyed everything he owned.

“As it started raining heavily, I immediately moved my children to the nearest relief camp. The next day, after packing bags and moving my cattle to a safer place, I along with my wife also moved to the relief camp,” he tells The Third Pole. “However, on returning after two weeks, I found that I had lost everything. My house was broken, I lost my utensils, and my cattle were washed away by the floods. This is the most devastating flood I have ever witnessed in my life.”

According to the Assam State Disaster Management Authority (ASDMA), this year’s floods affected over three million people and forced around 271,000 to take shelter in relief camps across the state. Floods have become an annual disaster in Assam over the past 10-15 years, affecting an average of around 930,000 hectares per year. They have become deadlier in recent times, according to the Water Resources Department.

Mirza Zulfiqur Rahman, an independent researcher based in Guwahati, Assam’s largest city, believes man-made changes to the geography of the Brahmaputra River are the main reason behind devastating floods. “Over time, there were a lot of interventions on the riverbed in the form of embankments and the construction of dams. Also, no efforts were made to study the floodplain or even map it properly. This led to a lot of disruption in the natural flow of the river and hence a lot of devastation.”

He says that the combination of climate change and the construction of infrastructure such as highways and airports is behind the increasing intensity of floods. These and other construction projects may be sited in flood-risk areas, but have insufficient drainage, with their hard, rather than porous, surfaces increasing run-off.

To mitigate the effects of floods in Assam, successive governments have spent close to three billion Indian rupees (about USD 38 million) on the construction of embankments over the past six decades. However, these embankments have not been very successful at controlling floods, because of either poor construction quality or encroachment by people.

Partha Jyoti Das, a scientist and head of the water, climate and hazards division at the Guwahati-based environmental research organisation Aaranyak, says that although embankments are built to control floods, they can make floods even more devastating when they collapse. The recent floods in Silchar are a classic example, with the city experiencing its worst ever floods after the Bethukandi embankment was breached. Sometimes the problem is not even breaching, but a lack of coordination and warning when overwhelmed dams release water.

Das also suggests that encroachment of settlements in flood-vulnerable regions adds to the problem.

“There is a certain space around the river known as a buffer floodplain which will be flooded during monsoon rains. If you live there, then you are going to be affected. There is a high density of population that resides on these floodplains in Assam, and whenever floods come, these people are forced to live in relief camps,” he says.

As the flooding becomes more intense, causing more damage to humans and wildlife every year, policy measures and interventions are increasingly necessary. Rahman believes that unless there is a conversation around how to tackle the problem, not just during the floods but throughout the year, the situation will not improve. He is of the opinion that there is a need to look at the traditional ways in which the various indigenous communities of Assam have dealt with floods effectively for a long time.

Pranab Doley, assistant secretary of the All India Kisan Sabha, an organisation that promotes peasants’ rights, says that indigenous tribal communities across Assam have developed a particular way of life in which they coexist harmoniously with the local demography and climatic conditions. He highlights the architecture of the bamboo houses built by communities like the Deori or the Mising. 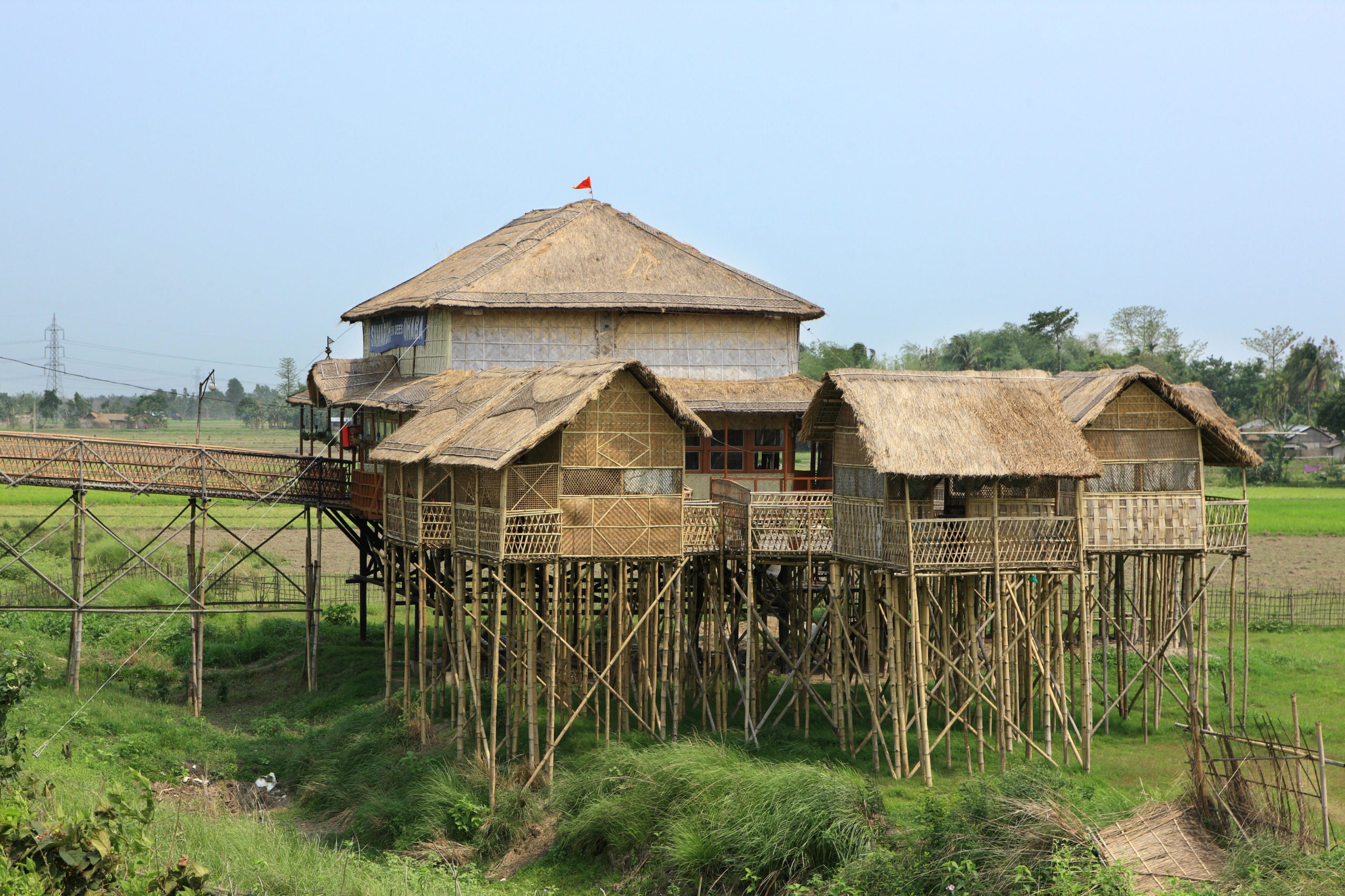 Chang ghar – traditional stilt bamboo houses – could be one way to minimise flood damage in Assam, according to some experts (Image: Alamy)

These houses are built on raised bamboo stilts, and unlike concrete houses, they are resilient even to floodwaters. Members of these communities also keep boats next to the house, so that the family can move to a safer place in case of extreme flooding. These types of traditional houses are known as chang ghar, which basically means a tall house on a platform. They are easy to construct, because they are built using bamboo, a material that is sourced locally.

As another traditional method to mitigate flood damage, Doley also explains how traditional man-made mounds, known as kaso pithiya, are used to solve the problem of waterlogging. These mounds are generally built in the shape of a semi-circle, like the shell of a turtle rising above the floodwater.

During a flood, land that is temporarily immersed in water can become waterlogged, which is when the soil becomes completely saturated with water that is unable to drain away. Building houses on top of kaso pithiya avoids floodwater weakening foundations, as they are raised above the water and will not get waterlogged. It also solves the problem of dirt and silt that is left behind when floods recede. Many communities even build these “highlands” to protect wildlife, as animals can take refuge on the soil mounds that rise above the water level during floods.

Das says there are cultural challenges associated with constructing chang ghars on a bigger scale. As chang ghars are mostly built by the Mising, “some cultural taboos or norms are involved”, because some communities do not want to implement a housing technique that is so strongly associated with a different group. The Mising are recognised as a Scheduled Tribe under the Indian constitution, indicating a history of socio-economic marginalisation. More privileged communities can be resistant to adopting practices from those they have historically looked down upon.

However, Das adds, “now with the growing intensity of floods, people across different communities and tribes have started building houses on raised platforms. Furthermore, you will now find many government houses are also made in that style, [where] the ground floor is kept empty and on the first floor you will see rooms occupied.”

With the growing intensity of floods, people across different communities and tribes have started building houses on raised platforms

Das believes the government of Assam should implement a subsidised housing policy, especially for people in flood-prone areas, to boost the construction of raised-platform housing and so limit the destruction caused by floods. But he warns that this could create a different problem: in chang ghars, the ground floor, and sometimes even the first floor, is kept empty. In areas with high population density and limited land, constructing such houses is not feasible, Das says.

There is an urgent need to construct areas of high ground for animals to retreat to during floods, especially in areas around Kaziranga National Park, a UNESCO World Heritage Site. In the recent wave of floods, around 18% of the park was submerged. Although there are currently 144 man-made high areas in the park, with the increasing frequency of floods it is becoming necessary to look for more permanent solutions.

Rahman, the independent researcher, says it is a misconception that the traditional knowledge system cannot be scaled up as a solution to Assam’s floods. However, with the number of dams and embankments increasing, he believes that soon even long-standing traditional methods will prove inadequate to combat the growing impact of flooding, as the damage being done to the environment is irreversible.