Last month Meen Chik Mro, 52, travelled to the capital of Bangladesh for the first time in his life. He made the long journey to Dhaka to protest against the construction of a resort on land traditionally held by indigenous communities in the Chittagong Hill Tracts (CHT). A five-star hotel is being built here, close to the country’s southeastern border with Myanmar and the state of Mizoram in India.

Shifting cultivation involves cultivating land temporarily and then leaving it fallow to restore the soil’s fertility. It is a cyclical process that requires more space than conventional farming.

Jumia refers to someone who does jum or jhum – the local words for shifting cultivation.

Meen Chik Mro is a shifting cultivator and lives in Kaprupara, a remote village in Bandarban district. For generations, shifting cultivators from indigenous communities have been farming this mountainous and relatively undeveloped region, where the Himalayan foothills reach the sea.

On 2 March, Mro along with about 30 other jumias put on their traditional clothes and played the plu, a local bamboo flute, at the protest in Dhaka.

Combined, the three districts of CHT cover 10% of the area of Bangladesh. Most of the residents are from 11 indigenous communities, of whom the Mro are the fourth-most populous. They do not want the luxury resort to be built in the Naitang hills near their villages.

“We don’t want a hotel in the mountains. Jum land is our main source of survival in the hills. There are mountain springs and green forests. All these will be destroyed if the hotel is built. Our lives will be in danger,” Meen Chik Mro told reporters during the protest.

The army and Sikder Group, a private company, say the district council has leased a 20-acre (8-hectare) plot to them where the resort is being built. Protesters and lawyers say the council has no right to do so.

The protest led to the visit of a parliamentary committee to the Naitang hills on 20 March. A senior army officer showed the committee members a map and told them that the Army Welfare Trust and Sikder Group would not develop beyond the 20 acres they have on lease, that there is no settlement within 2.5 kilometres of the area, and therefore there is no chance of anyone being evicted by the project.

Construction of the resort and amusement park continued in April after the visit. It is being built as a joint venture between R&R Holdings Limited, part of Sikder Group, and the 69th Infantry Brigade of Bandarban of the 24th Infantry Division of the Bangladesh Army.

Who owns the land?

Kyaw Shwe Hla, chair of the Bandarban Hill District Council, signed a 40-year lease for the 20-acre plot with the commander of the 69th Infantry Brigade on 2 February, 2014.

Devashish Roy, lawyer in the Bangladesh Supreme Court and an indigenous rights activist, says, “The Bandarban Hill District Council is not the owner of the land leased to the resort or five-star hotel. How can they give this land to another institution for commercial purpose? It’s a complete violation of law.” Roy is also the traditional chief of the Chakma, an indigenous community in Bangladesh and India.

We don’t want a hotel in the mountains. Jum land is our main source of survival in the hills. There are mountain springs and green forests. All these will be destroyed if the hotel is built

In the CHT, land is owned by a community rather than individuals. The community land is divided into mouzas, made up of several villages. Each mouza has a headman. Prevailing CHT law says the approval of a mouza headman is required for development on a plot.

The resort is being built in Lulaine mouza. Its headman, Singpash Chowdhury, says, “My uncle was the headman when the place was settled [leased out to the firm and the army]. He did not give any written approval. He was only verbally informed. The settlement did not follow the rules.”

There is no water source where the resort is being built, at the top of a hill. Mro community leaders told the visiting parliamentary committee members that the Sikder Group had started to build dams on Lulaine canal and Dolapara stream, which supply water to nearby villages. The residents fear their only sources of water will be taken over.

The Bandarban office of the Department of Public Health Engineering, which is responsible for supplying water, says around half of the 400,000 people in the district are not connected to its network. Around 70% of the people living around the under-construction resort depend on water streams, canals and small rivers.

Even before this, the streams were in poor condition. A 2017 study by WaterAid Bangladesh found water flow had fallen in seven of 10 springs studied compared with 2008.

The project manager, Sirajul Islam of the Sikder Group, was present at the committee meeting in March. He could not say where the resort would get its water, according to community leaders. 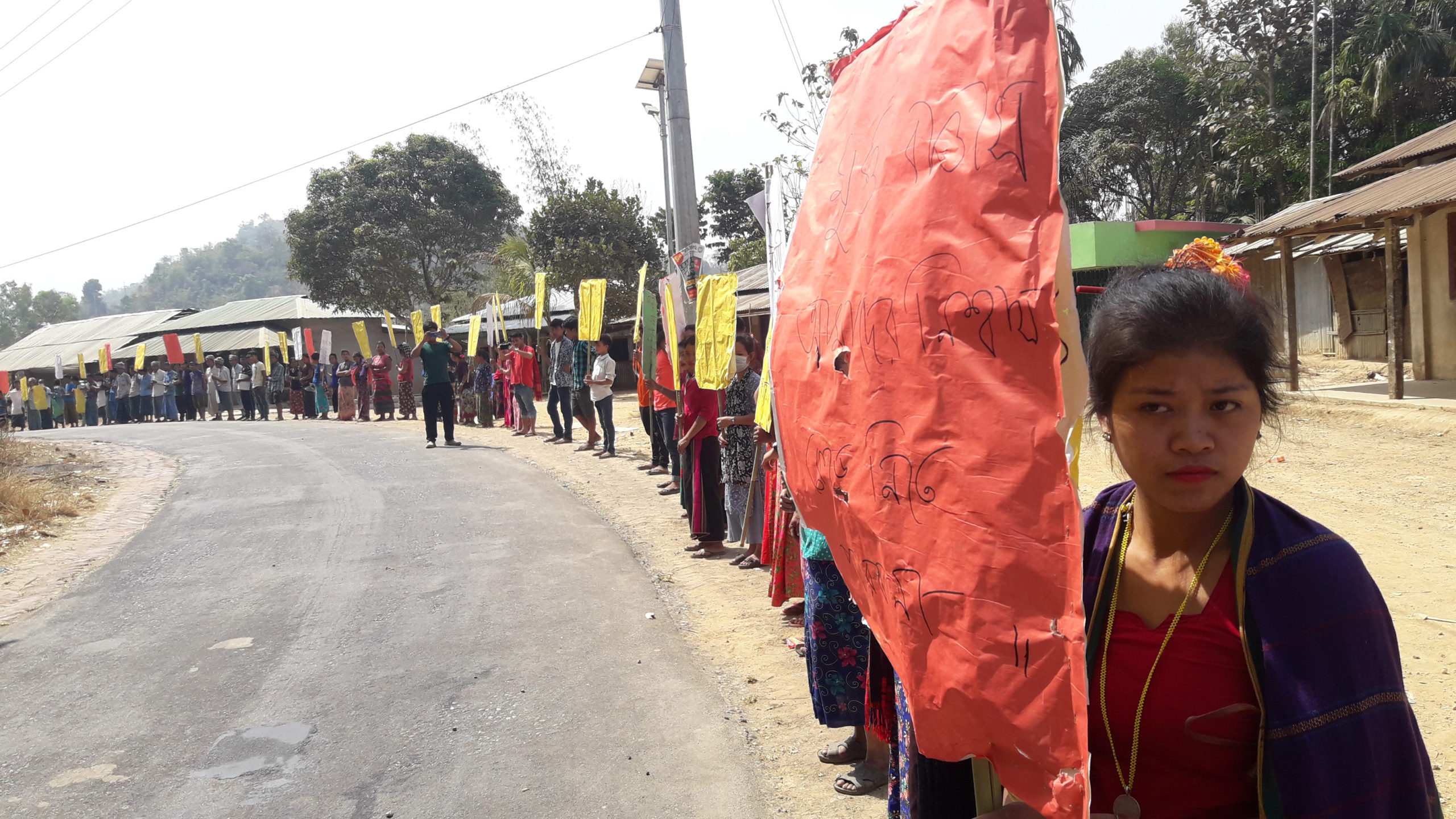 The residents’ worries over water continue, as does their fear of eviction. In a petition to Sheikh Hasina, prime minister of Bangladesh, Mro community leaders wrote: “We’ve been cultivating jum for centuries in the Chimbuk and Naitang hills, and we’ll be evicted from our homes, crematoriums, sacred stones, sacred trees, water sources etc due to the implementation of the hotel construction project.”

Social and environmental impacts of development

Disagreeing with claims no one would be evicted, Mro community leaders say six of their villages spread over roughly 1,000 acres would be uprooted and the traditional livelihoods of an estimated 10,000 residents would be damaged in various ways.

The community leaders told the parliamentary committee members that the builders had initially set up poles to occupy an area much larger than 20 acres, going up to three villages (Kaprupara, Dolapara and Kalaipara), saying the area was wanted for amusement parks. The protests seem to have stymied that move.

Reng Young Mro, a student leader of the community, said: “It’s not a state need but for investors’ profits, wealthy tourists’ luxury, recreation and enjoyment. A blueprint has been prepared to destroy the traditional way of life, personal and social barriers, women’s dignity, values and the environment.”

According to a 2017 study by the Centre for Environment and Geographical Information Services and WaterAid Bangladesh, the area covered by forest in CHT decreased by 372,036 hectares in the previous 20 years.

“There have been various development projects and settlements in the Chittagong Hill Tracts without considering the type of land, water flow and weather. As a result, forests and water sources have been destroyed,” says Mohammad Zakaria, professor in the Department of Environmental Science and Management of North South University of Bangladesh.

“Before establishing any resort or five-star hotel in this geographically sensitive area, an environmental impact assessment is mandatory. The government and the owner of the hotel project should clarify the water management system of the proposed hotel,” he added.

Kyaw Shwe Hla, the district council chair, declined to speak to The Third Pole’s correspondent on the matter, but admitted that he did not know of any environmental impact assessment study.

The area is part of the elephant migration corridor between Bangladesh and Myanmar. The corridor has already had serious disturbances from the Rohingya refugee camps nearby.

‌Zakaria said: “Lama upazila [sub-district] in Bandarban is one of the roaming areas for Asian elephants. Large public gatherings there could affect elephants’ movement.” There are an estimated 300-350 wild elephants in Bangladesh, of which around 200 are local.

“The local wild elephants occupy the forests of CHT and Cox’s Bazar districts,” said S M Kaiser, divisional forest officer of the Bangladesh forest department. Asked if the resort would disturb the wild elephants, he replied: “Elephants don’t climb very high mountains. However, as a government official, it would not be right for me to talk about hotel construction.”

In February, the Office of the United Nations High Commissioner for Human Rights called on the Bangladeshi government to halt construction of the resort. “Bangladesh should suspend the construction of a large-scale tourist resort in the Chittagong Hill Tracts because it threatens to dispossess the indigenous Mro people of their traditional lands and cause serious environmental damage,” its statement reads.

But the construction continues.

Interview: Bangladesh ‘cannot have’ a fixed delta plan for 2100

In Bangladesh, a community lives and dies on boats