Nomadic shepherds in the central Himalayas are facing a double threat. Not only is more and more pasture land being fenced in for plantations, they are unable to sell their woollen products at a worthwhile price. The shepherds, from the indigenous Bhotia community, must also pay the state forest department ever-increasing fees for grazing licences, even as the area traditionally available to them shrinks.

Bagori, in the northern Indian state of Uttarakhand, is a typical Bhotia village, and lies just 25 km through footpaths from the source of the Ganga, India’s longest and holiest river. Almost 2,700 metres (around 9,000 feet) above sea level, it is to here that the shepherds retreat in autumn from pastures at even higher elevations, as far up as the border with Tibet. In winter, they then move to the foothills in search of fodder for their animals, and to sell the coats, sweaters, shawls, caps and blankets they have made at home. Then it’s back uphill in the spring. 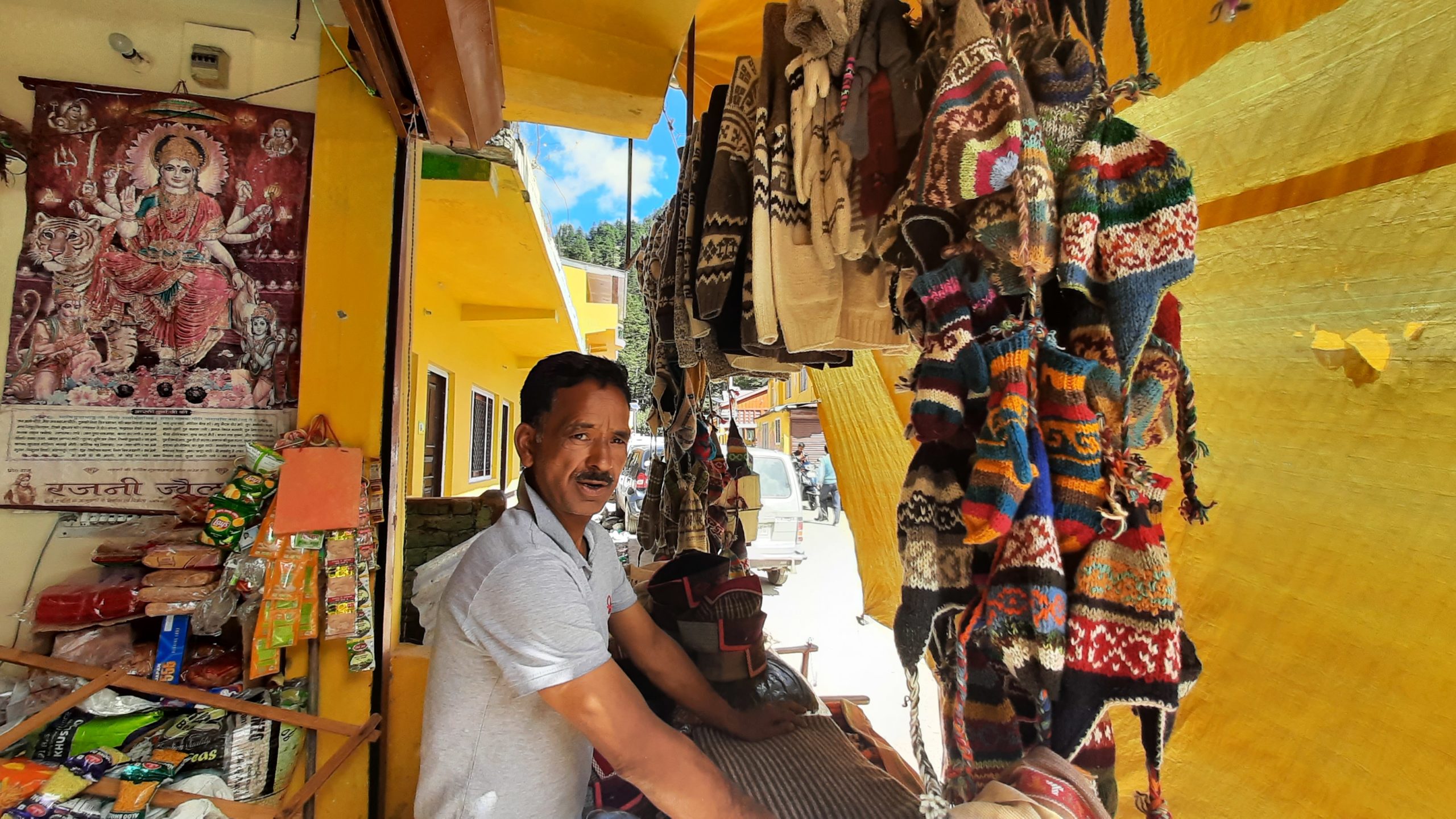 But this centuries-old nomadic lifestyle is now in danger, as Bhotias find space for their activities increasingly limited, whether they move up or down from Bagori. Rajendra Singh Negi, a 60-year-old shepherd who has remained in the village for winter, said his community has long taken their flocks to graze on meadows in Chorpani, a village further downhill, with “receipts” from as far back as 1964 to prove this. “But when we went there this November, we found that the forest department had used the area for tree plantation, so we could not use it for grazing,” the shepherd explained. “There was a time when over 50 families like ours used to graze their flocks there. This time there were only seven, but we still could not graze.”

The receipts Rajendra mentions are for old permits, paid in order to graze in areas owned by the forest department. A fresh permit is issued every year, but only if a shepherd can show the previous year’s. The amount to be paid is based on the size of the flock. 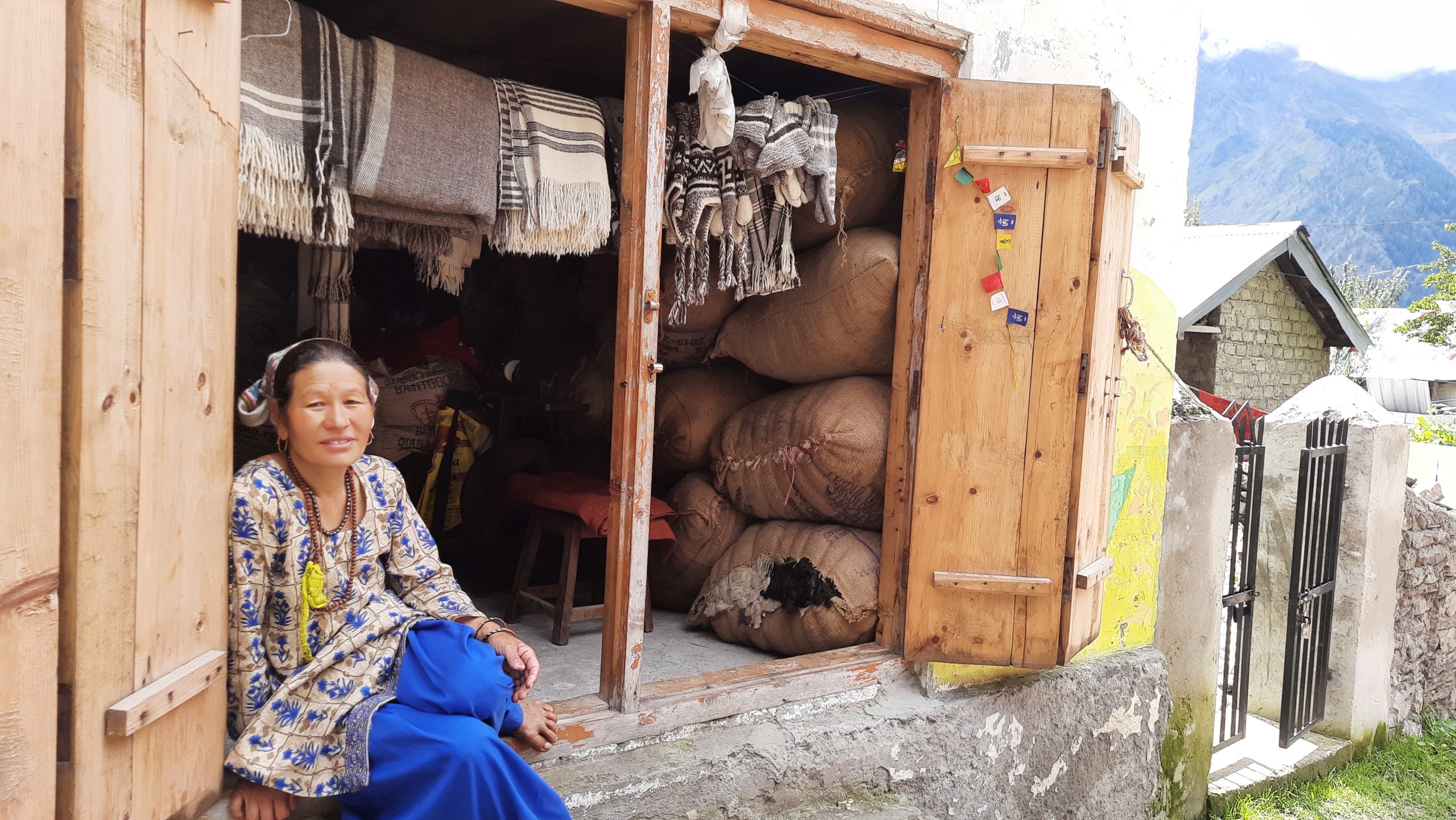 A Bhotia woman sells woollen goods in Bagori. The preparing and selling of wool products is traditionally carried out by women in the community, but as prices dwindle and shrinking pasture threatens future flock sizes, their crafts are becoming a less viable source of income. (Image: Varsha Singh)

Jaimohan Singh Rana, a shepherd from Fitari, a village to the west of Bagori, told The Third Pole of similar experiences in dealing with authorities in the town of Mussoorie. “We used to get around 8,000 hectares from the Mussoorie Forest Division for winter grazing, until the 2011-12 plan of the state government reduced it to four hectares, because they wanted to plant trees on the pasture,” he said. “Our flocks have been banned from the area since that.” Rana showed a letter he had written to the then chief minister of Uttarakhand protesting the move.

Narayan Singh Negi is another shepherd who tells of increasing marginalisation, despite the benefits that his long-practised livelihood can bring to the landscape. “The forest department is keeping us away from the forests,” the 73-year-old said. “These forests become green after the [June-September] monsoon rains. Then the grasses dry out by November or December. Our flocks graze on these dry grasses and thus reduce the fire hazard in these forests. They fertilise the soil and their hooves do a lot of weeding.” 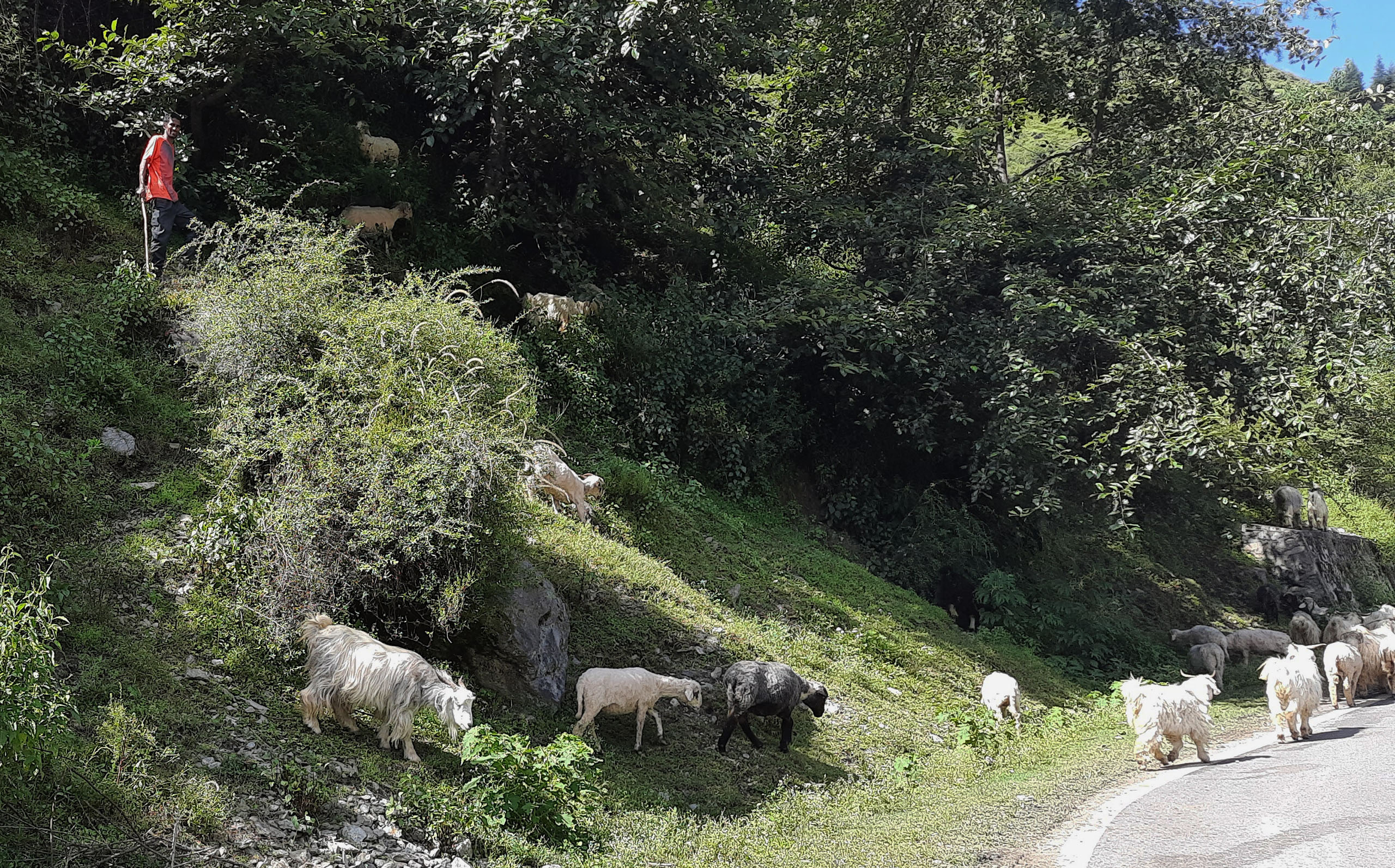 A man herds sheep along a road near Bagori village, returning from higher pastures. Shepherds in the Bhotia community have well-established seasonal patterns for nomadic grazing, between high pastures near the border with Tibet and the Himalayan foothills. (Image: Varsha Singh)

The Food and Agriculture Organization (FAO) of the UN agrees. It has proposed that 2026 be observed as the International Year of Rangelands and Pastoralists, with its proposal document acknowledging the numerous ecological services provided by grazing. As well as lowering the risk of wildfires by reducing ground-level biomass, grazing can aid the regeneration of fresh grasses and arrest soil erosion, and benefit carbon sequestration and conservation of medicinal plants, the FAO explains. Thus, the organisation adds, grazing can help combat climate change and its impacts, promote sustainable use of terrestrial ecosystems, combat desertification, and halt and reverse land degradation and biodiversity loss.

In response, Sushant Kumar Patnaik, chief conservator for Garhwal division in the Uttarakhand Forest Department, said: “The number of sheep and goats has exceeded the carrying capacity of our forests. Overgrazing damages forests.” 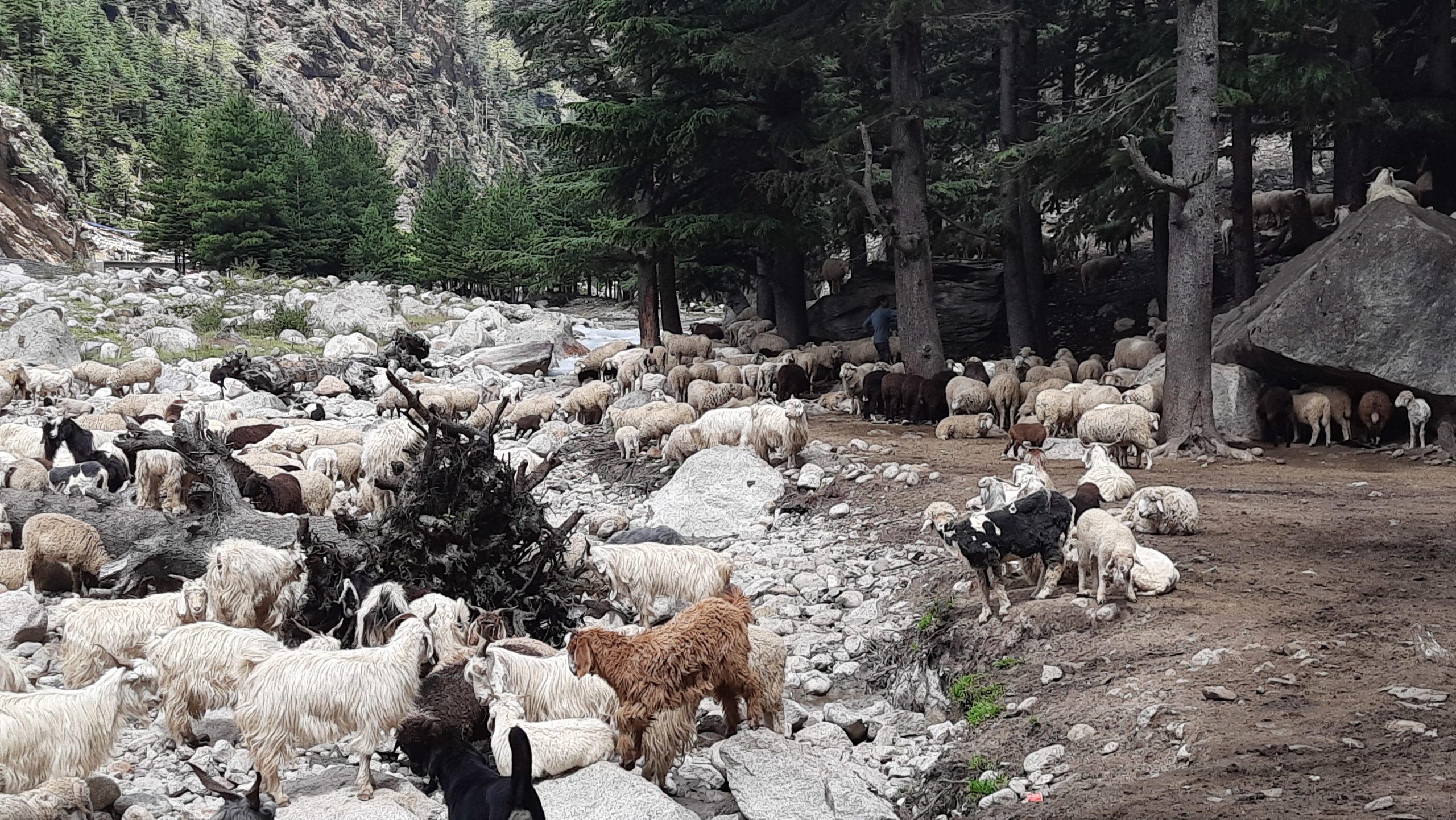 A flock of sheep and goats in Bagori, in the mountains of Uttarakhand (Image: Varsha Singh)

Patnaik explained that the Forest Division (a part of the forest department) has a 10-year “working plan” for all protected forest areas identified as pastures. Based on this plan, grazing licences are given for a part of the pasture land, using a rotational grazing policy.

Asked about the overall decrease in pasture area, Patnaik said he did not have the data in one place. The closest indicator is the 2021 report of the Fodder Resources Development Plan for Uttarakhand. It shows an increase in the state’s sheep numbers from 311,000 in 1997 to 361,000 in 2019 and goat numbers from 1.09 million in 1997 to 1.37 million in 2019. But that rise is much lower when compared to other states in India. The report ascribes this to shortage of good fodder. It says 11 of the 13 districts in Uttarakhand face a fodder shortage.

Lack of good fodder means less wool. On top of this, Bhotias are facing lower demand for their wool products. After shearing, preparing the wool and the clothes is traditionally the job of women in the Bhotia community, who often take charge of selling the clothes as well. But now they are finding the traditional clothes they continue to knit and weave have few buyers, and are fetching less on the market. They are unable to compete with mass-produced machine-made woollen clothes. 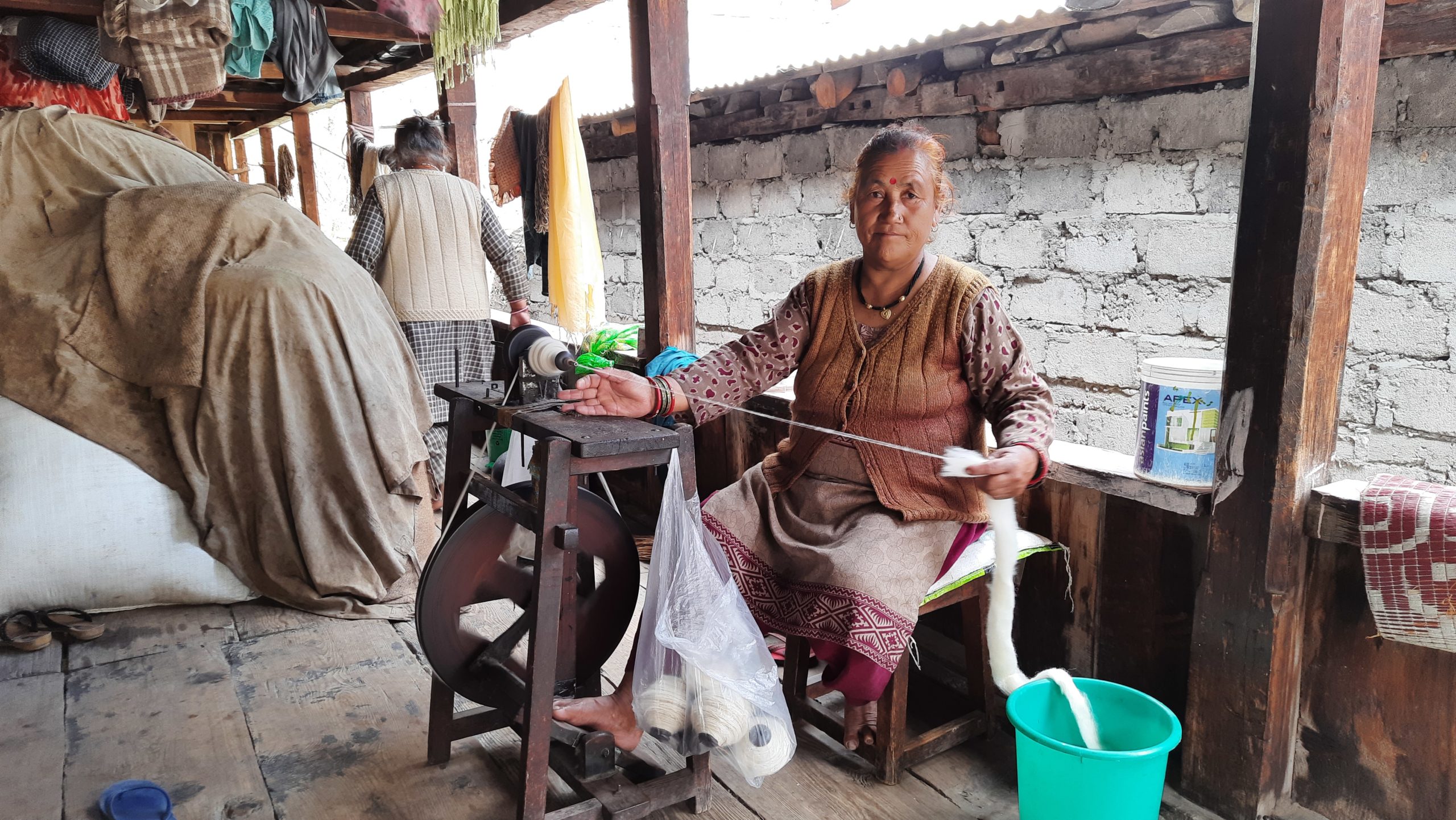 A Bhotia woman makes woollen thread in Bagori. Women in the village use traditional methods and machinery, but residents say the current prices no longer justify the significant labour required to make their wool products. (Image: Varsha Singh)

“Out of around 500 families living in our village, only 50 to 60 are still working as shepherds. Women are also slowly leaving their traditional work,” Bagori resident Narmada Rawat said. “The money we make does not justify the labour involved in washing wool, carding it, making thread, knitting and weaving.”

Sitting at her loom in the porch of her home, fellow resident Leela Devi said: “We buy raw wool to weave shawls. It takes about 10 days to weave a shawl. Given the price at which we are able to sell, we would have made more by working as unskilled labour.” 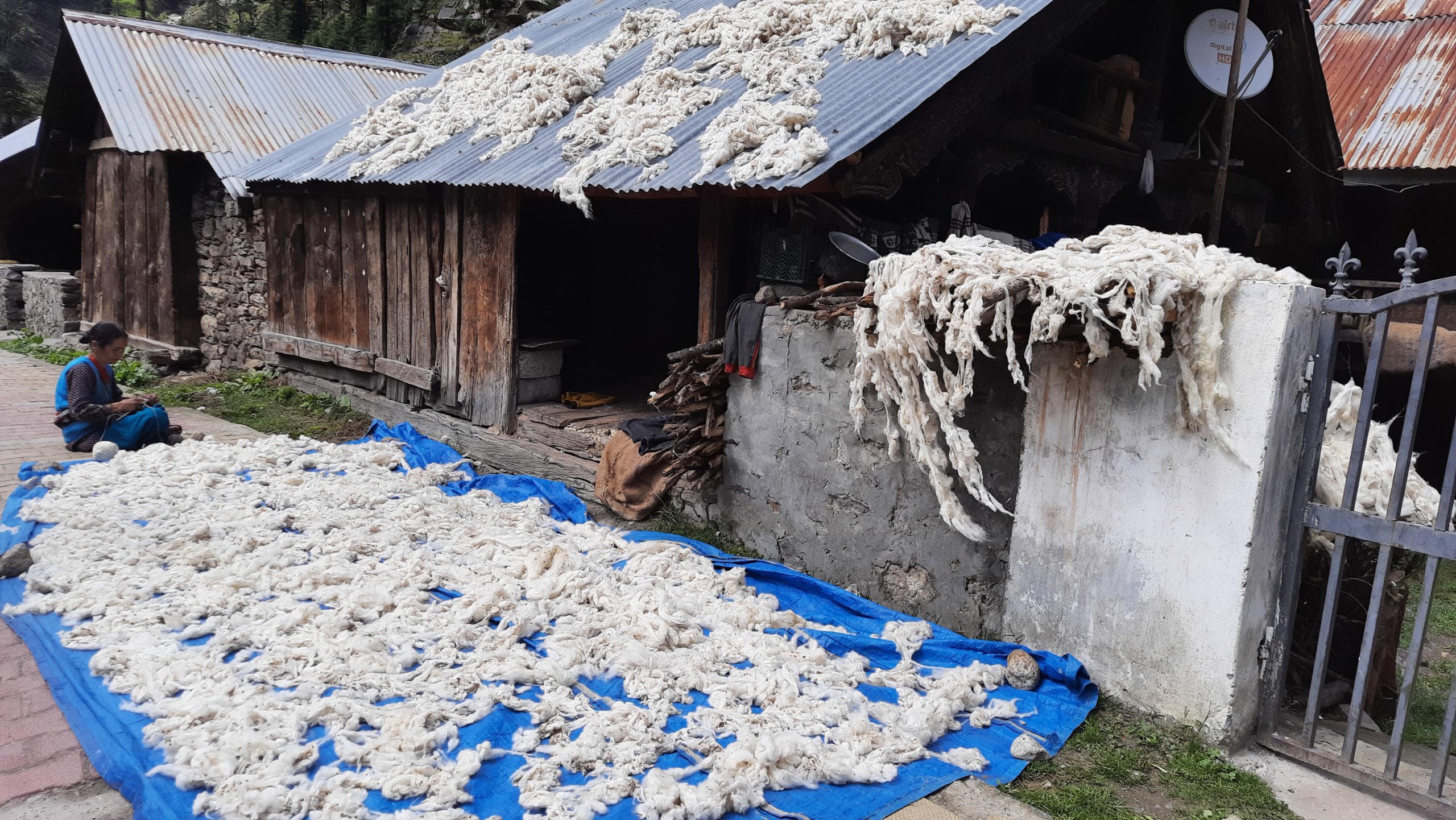 Wool dries in the sun in the village of Bagori. As Bhotia shepherds and wool producers struggle to compete, outside experts have suggested some stages of the process be done with machines to reduce labour. (Image: Varsha Singh)

In 2020, Navin Anand, a development consultant, worked with the Bhotias of Bagori as part of a project called SECURE Himalaya, run by the UN Development Programme and funded by the Global Environment Facility. One aim of the project was to help build sustainable livelihoods among local communities. Anand said Bhotia weavers find it difficult to compete in modern markets, being less exposed to modern fashions, knitting with older machines and lacking marketing outlets. The labour can be reduced by washing and carding the wool with machines, he added.

Other groups can also provide options and outreach to help the Bhotia community. Altaf (he uses only one name), Uttarakhand regional manager of the Tribal Cooperative Marketing Development Federation (TRIFED), said that Bagori residents should contact him and his organisation. “Under its Van Dhan Vikas Yojana (Forest Resources Development Programme), TRIFED can help sell their products. But first, they will have to set up a self-help group.” 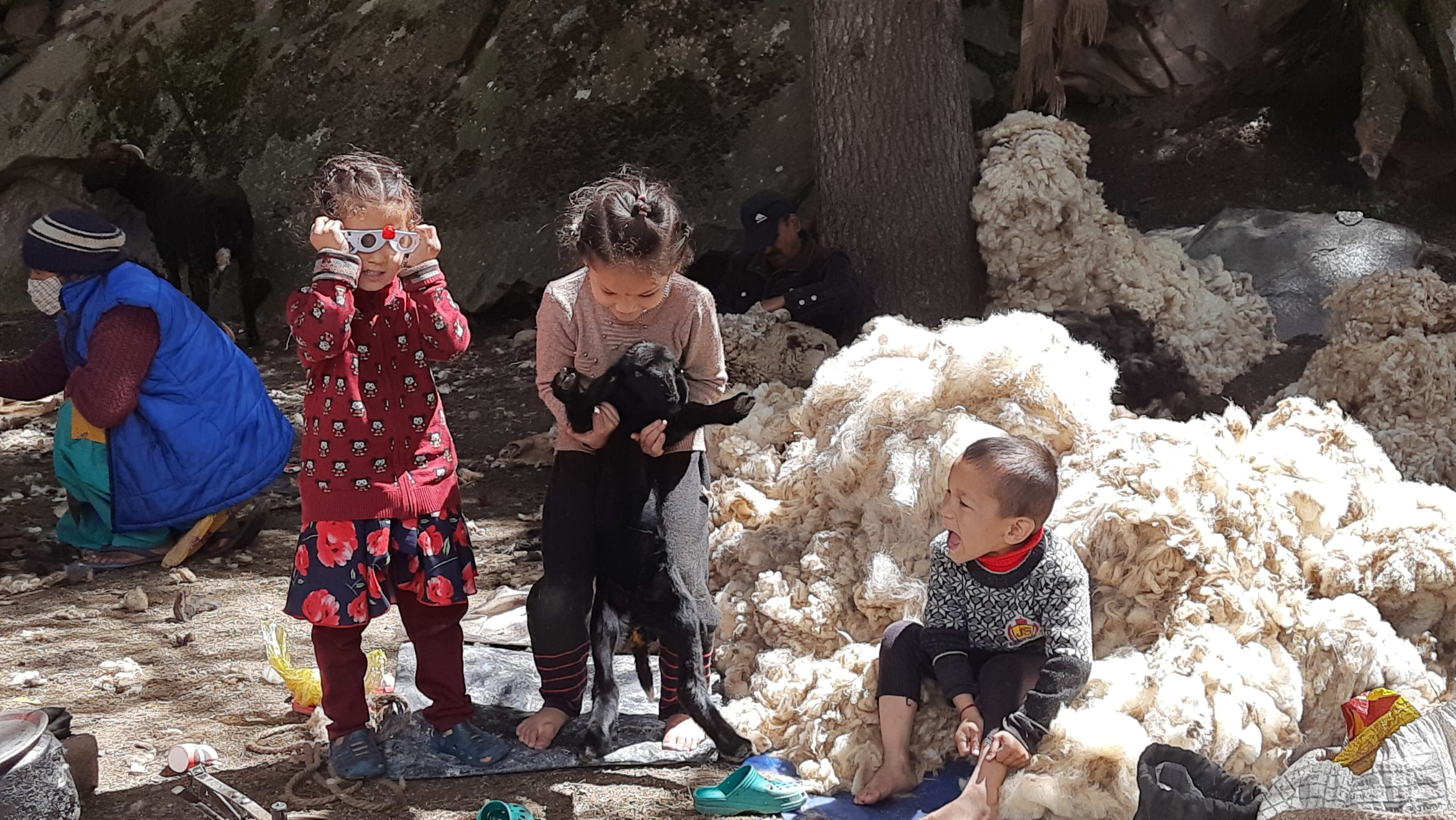 Children play with sheep and wool in Bagori. Though herding and wool craft are the traditional livelihoods, younger members of the Bhotia community are increasingly pursuing different lines of work, or even migrating – decisions that many older villagers support. (Image: Varsha Singh)

However, the new generation of Bhotias may ultimately prefer to leave their traditional nomadic livelihood instead – and with the reluctant blessing of their parents. The increasing pressures have forced many to leave Bagori for work in cities, including both of Narayan Singh Negi’s sons. Meanwhile, wool-worker Naramada Rawat is clear on her hopes for her family: “My two children are studying. We don’t want them to continue this work.”

How climate change is affecting an old pastoral tradition in Spiti