Sonam Lamo, a community healthcare worker in Kaza region of the Himalayan state of Himachal Pradesh in northern India, has been conducting house-to-house surveys throughout the lockdown to identify Covid-19 positive cases. As India entered into a nationwide lockdown on March 24 that lasted 75 days, the role of frontline health-workers like ASHAs (Accredited Social Health Activists) became increasingly clear.

What is the ASHA programme?

This article is the final in a three-part series on India’s adivasi community.

The ASHA programme was launched in 2005 to deal with the desperate shortage of trained health professionals, especially in underserved areas. ASHA workers are volunteers, trained in their local areas, and receive a fairly low renumeration. There is no fixed salary, and depending on the state, can range from a low of INR 2,000 (USD 27) to INR 10,000 (USD 136) per month. As the programme has expanded over the years, more and more demands have been made on their work. For example, since Covid-19 was declared a health emergency, ASHAs have been enlisted by the central government for contact tracing and collecting Covid-19-related information. 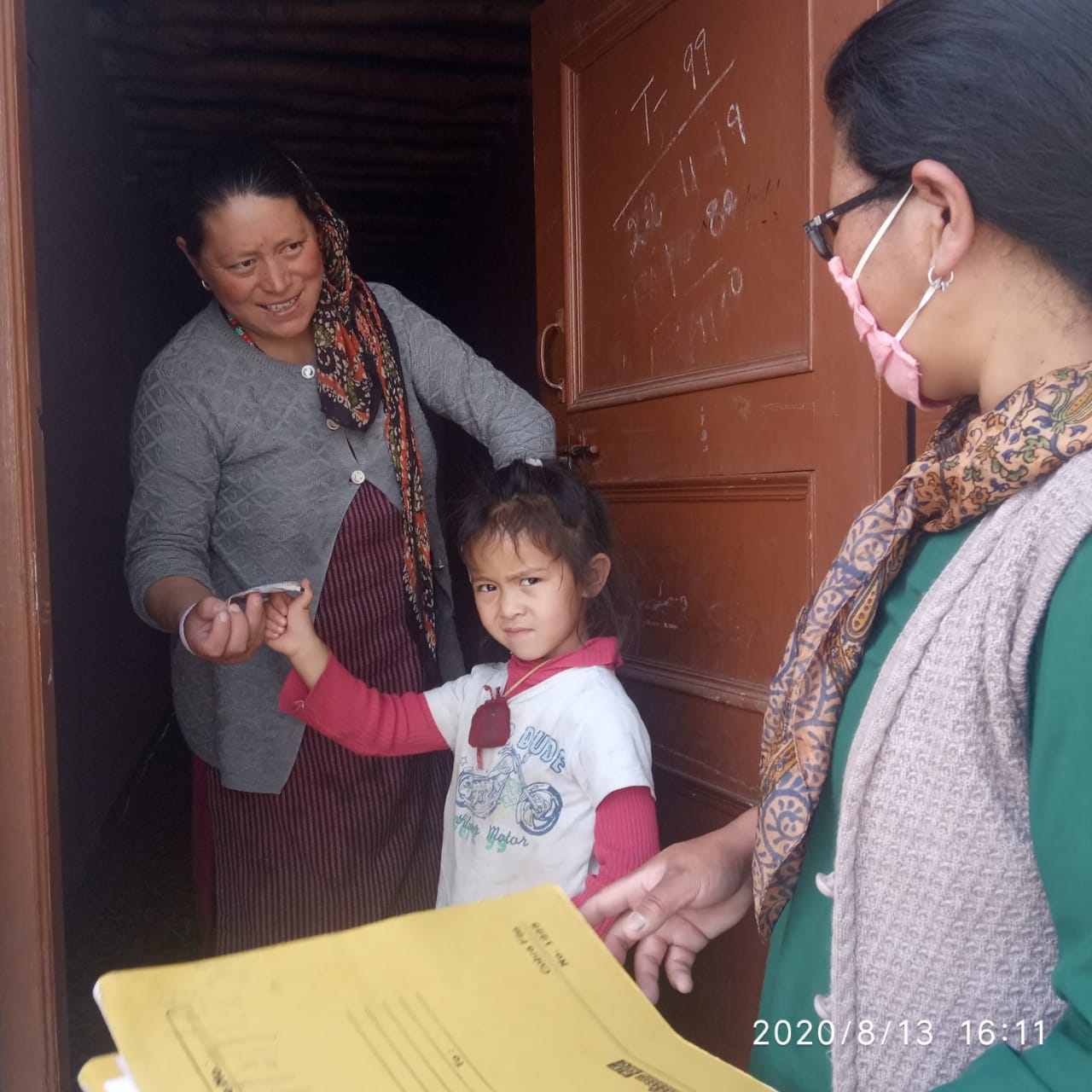 Sonam Lamo conducts house to house surveys at the peak of the pandemic [image by: Sonam Lamo]

Constituted under the National Rural Health Mission, ASHAs were imagined as a young and energetic group of community health workers. They act as a stopgap in the country’s flailing health care system, delivering assistance from maternal health to immunization in its vast rural and adivasi (indigenous community) hinterlands. In adivasi-dominated areas, one ASHA worker is expected to cater to around 700 people, which often spills over to close to 1,000 people. They are responsible for activities like registering new pregnancies, births and death, referring disease cases, supporting health services through home visits, conducting first-aid, immunisation , maintaining data and participating in community health planning. 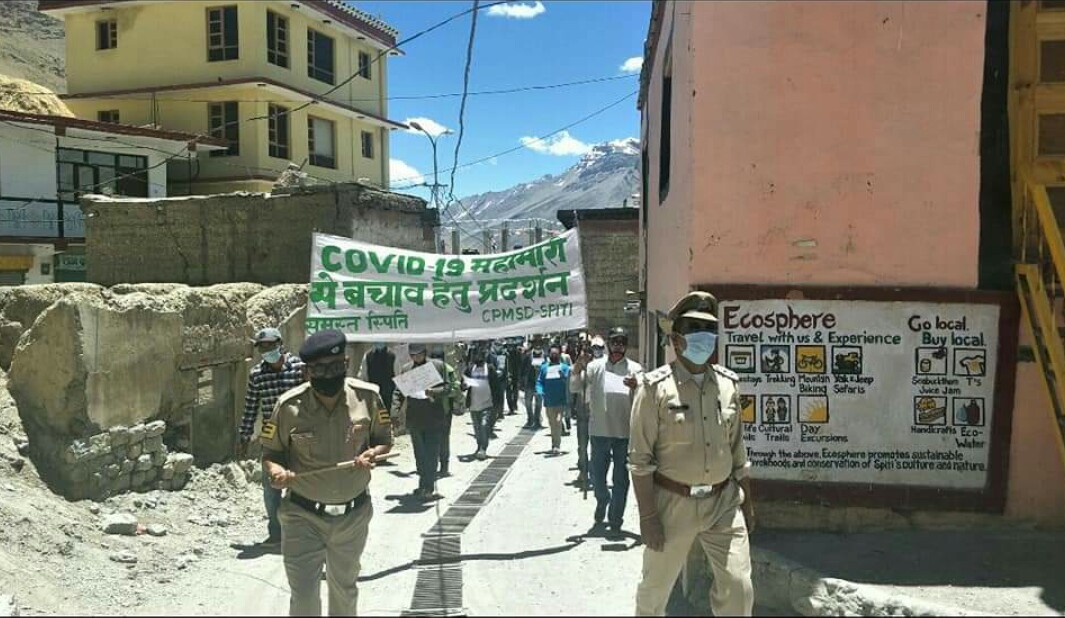 Lamo said she felt scared, recalling her experience with the Covid-19 related surveys and other tasks: “What if I contracted the disease, apart from that the regular problem of lack of infrastructure.” Test samples she collected were sent to the state capital Shimla, about 400 km away. She had to keep track of residents who were returning to the state in the summer, but also of other tourists visiting these areas. Despite all the work this entailed, Sonam only received INR 1,000 (USD 14) a month as her honorarium.

Health workers feel that this small government incentive is insulting considering the risks involved. The amount is actually less than the INR 2,000 (USD 27) they used to get per month, which has been halted since regular activities like immunization have been impacted by the pandemic.

In August, ASHA workers in various parts of the country went on a two-day strike to highlight their working conditions. Veena Gupta, the state president of the Uttar Pradesh unit of ASHA Karamchari Union said, “Most ASHA workers, despite being on the frontline and most susceptible, didn’t receive protective gear (PPE). Workers in our area weren’t provided with any information and training materials. Instead they had to learn everything with the help of handmade charts.” 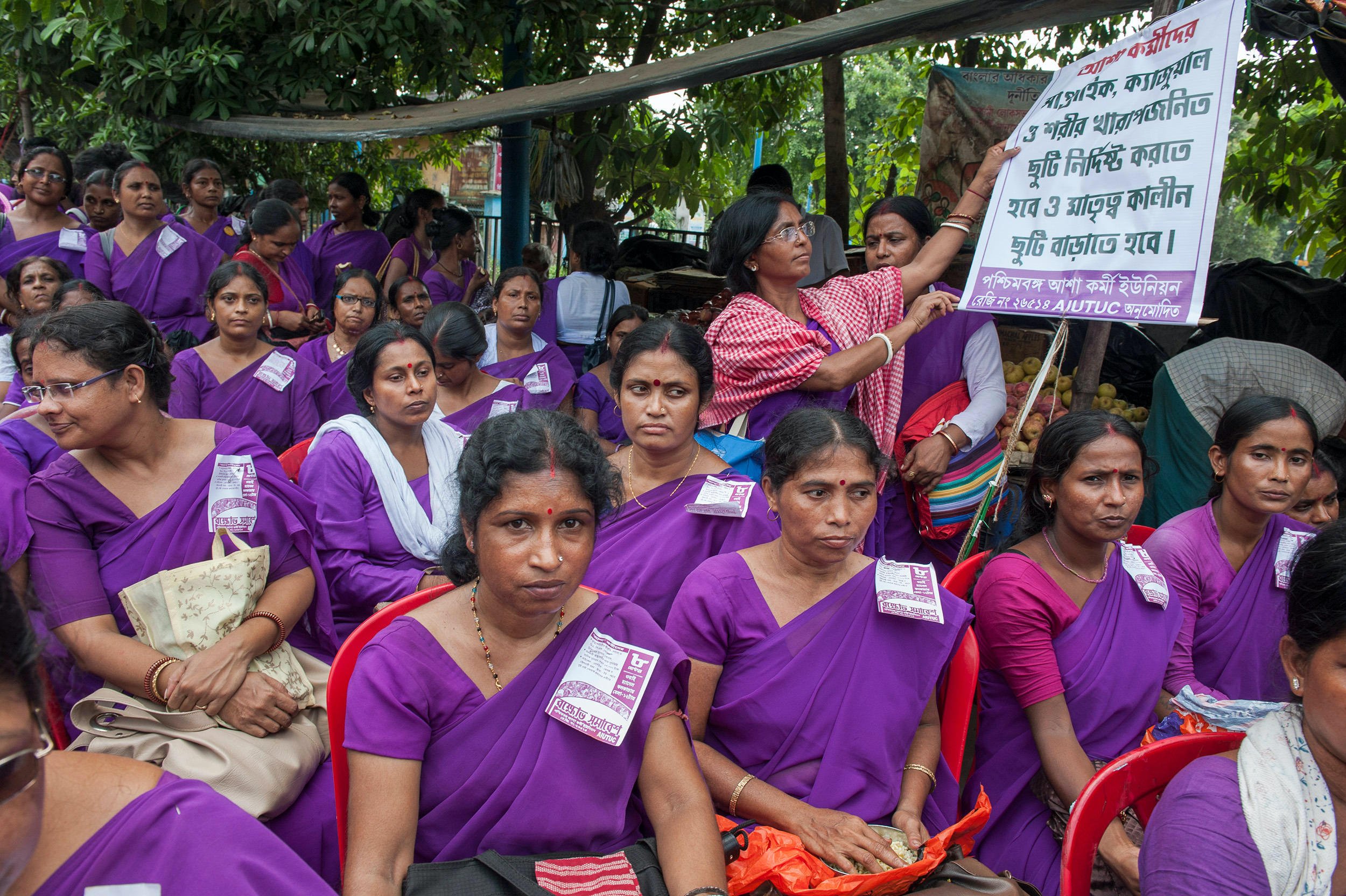 They had to work long hours during the pandemic. “They stay in the field for six to eight hours. They can’t drink water at anyone’s place, nor can they go to toilets,” said Gupta. Many ASHA workers caught the disease in the course of their work. Though many recovered, some weren’t so lucky.

The central government announced an insurance scheme under the aegis of Pradhan Mantri Garib Kalyan Yojana (The prime minister’s poor welfare scheme) for frontline healthcare workers — including sanitation staff, paramedics and nurses, ASHA workers and doctors. The insurance cover was INR 5 million [about USD 67,500] for 90 days from June 30, which was subsequently extended.

“The Covid-19 insurance scheme for health workers says that they will get the insurance only if they die of Covid-19, which can only be confirmed if they are tested. They have to wait for several hours to get tested in between their work hours.” After their deaths, autopsies aren’t conducted, making it difficult to ascertain that the cause of death was Covid-19. More recently, many ASHA workers have also died in road accidents.

The close contact of the ASHA workers with community members makes them ideal to collect and disseminate information on the pandemic, but it also makes them highly vulnerable [image by: Kiran, ASHA worker, Bihar]

Even as ASHA workers struggle to help communities  most need, many Adivasi-dominated regions are yet to be connected with ASHAs and other basic government healthcare services. Swarup Saha, a forest rights activist in the Alipurduar region of West Bengal, said, “This region has never seen regular visits by ASHA workers, etc. Even during Covid-19 they weren’t given proper equipment for work.” The Alipurduar district is home to many indigenous communities such as the Garos, Ravas, Totos, Dukpas, Mechs, Limbus, and a few Lepcha groups.

Despite these struggles, the central government has given some startling responses to questions of accountability on health. In September, the Union Health Minister Harsh Vardhan said that the ministry hadn’t maintained data on the number of healthcare staff, including doctors, nurses, support staff and ASHA workers, who have been affected by and died of Covid-19.

However, the problems of access to health, especially when it comes to indigenous people are not new. Studies have highlighted that even ASHA don’t reach the most marginalised groups, especially adivasis and indigenous women. Historically, adivasi women have used health services minimally. 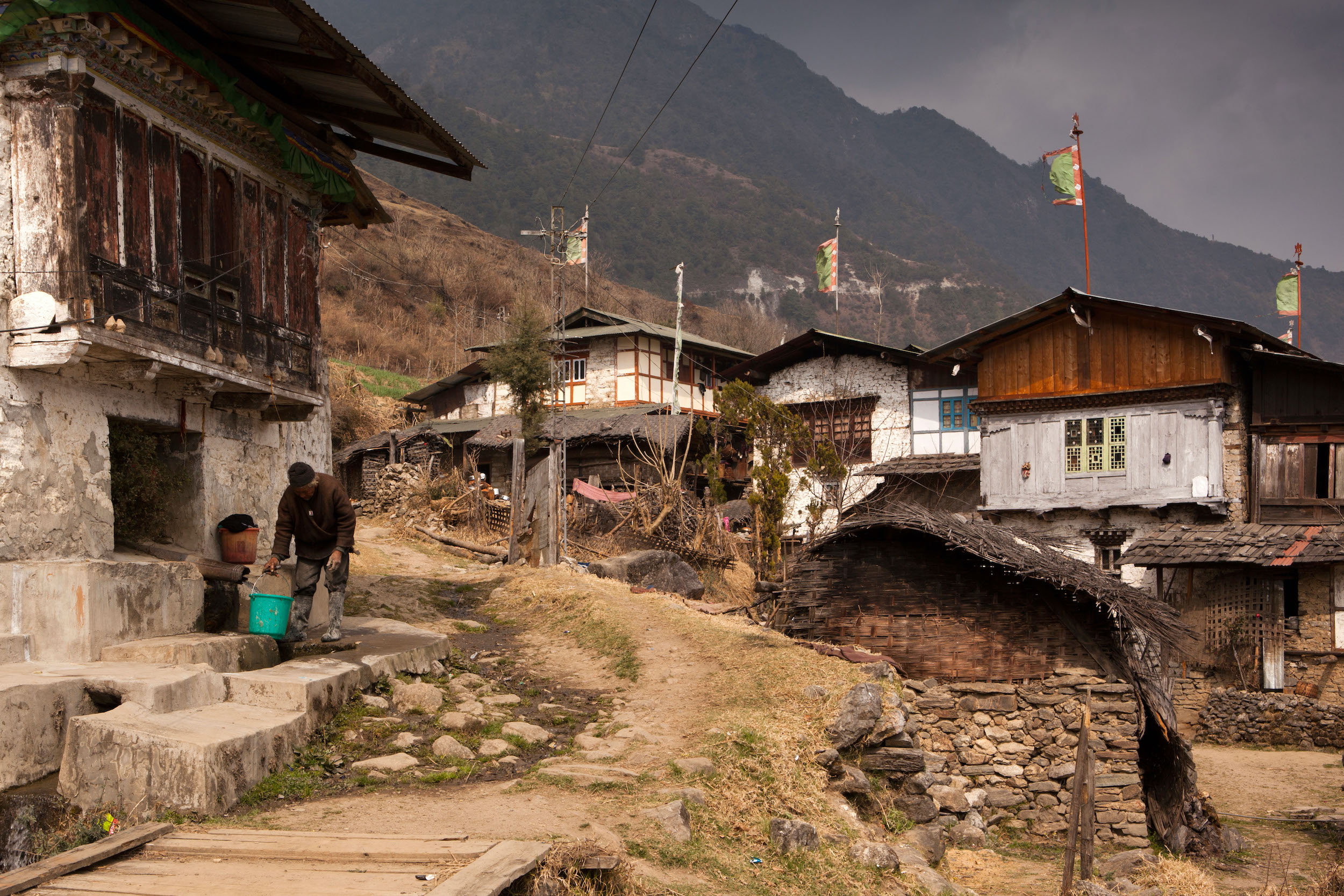 The National Family Health Survey (NFHS)-3 (2005-2006) reported that only 18 % of adivasi women gave birth in health facilities, compared to 33% among Dalit-Bahujans and 51% among upper castes. It said, “By caste/tribe, the likelihood of having received any antenatal care and care from a doctor is lowest for scheduled tribe mothers.” A study among adivasis in Odisha corroborated that the utilization rates of maternity services continues to be the lowest among this group. The study concluded that the mainstream health system has made no effort integrate traditional health providers into their work or build on traditional understandings of safe childbirth.

The pandemic has exposed this gap further, and yet again highlighted the need to invest in and support the reach of ASHAs in neglected regions where adivasis reside.

An expert consultation by the United Nations Health Agencies shed a light on the importance of community health workers (CHWs) in strengthening national health systems and the need to identify “evidence-based” interventions that CHWs can undertake, especially in reproductive health. Even conservative estimates have suggested that the ASHA program has led to a higher uptake of maternity healthcare services among the most marginalised groups.

During Covid-19, in far flung regions where indigenous people reside, ASHAs found it difficult to travel even to deliver basic services like immunisation. This will be an added concern when the Covid-19 vaccine is available in India. “There was no backup planned for ASHA workers when they were engaged in surveys, nor were they incentivized or supported to reach out to adivasi populations,” said Heera, a community worker from Udhamsinghnagar, Uttarakhand. Given that these health workers are already overworked and underpaid it is cruel to suggest that they should have managed to travel to these areas on their own. 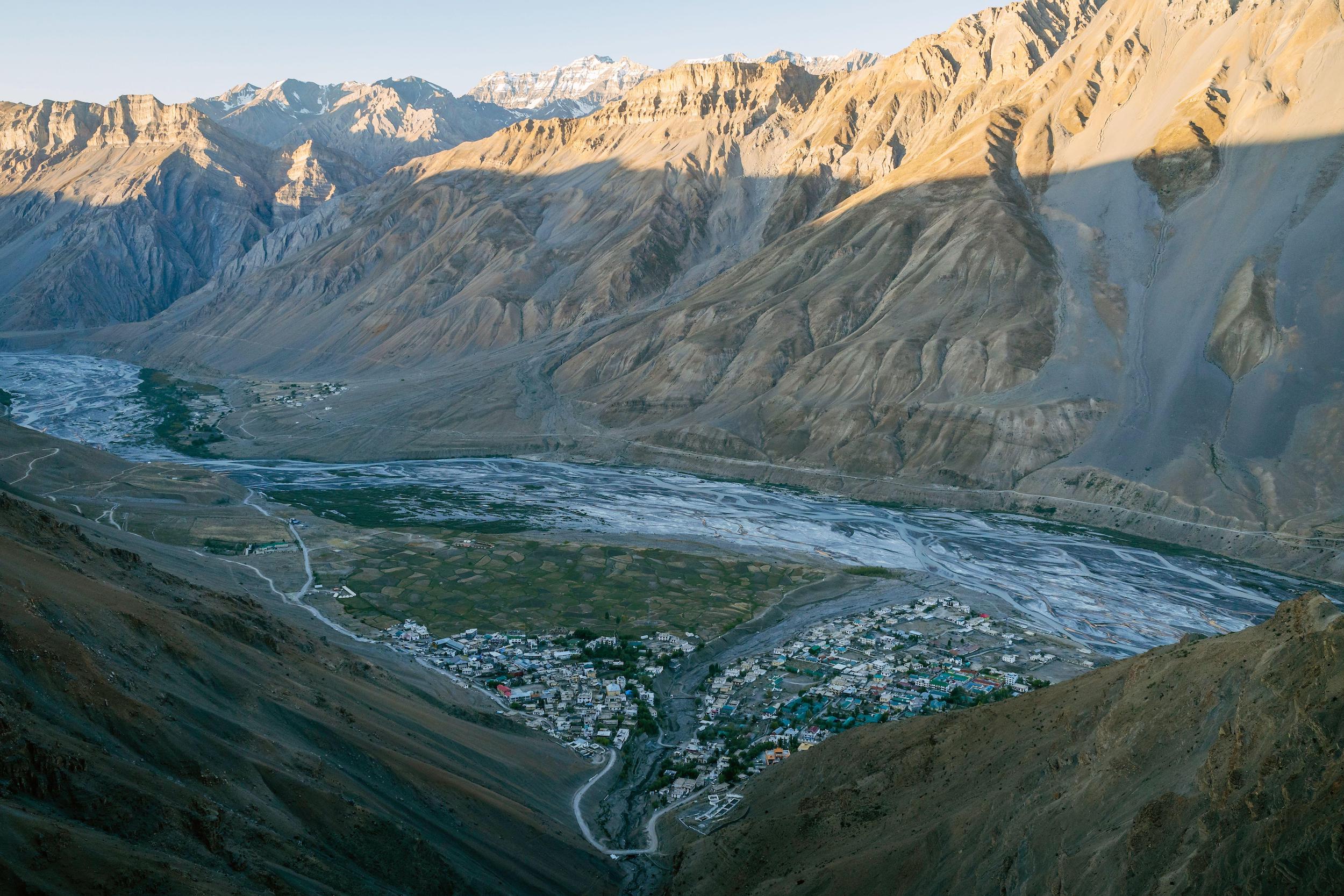 It is hard for ASHAs to reach communities in remote mountainous regions. A town in Spiti valley surrounded by the Himalayas near Kaza region, Himachal Pradesh, India.

The significant undermining of ASHA workers’ work, caregiving and medical experience has caught the attention of the world, and yet they face apathetic governments. The pandemic added a whole range of additional duties to their basket, for which most weren’t given the financial, technical and emotional support. At the same time this highlights the urgent need to find new ways to connect adivasi populations with ASHA, who provide their only link to healthcare systems. ASHA workers are still being retained as volunteers who are paid honorariums rather than minimum wage. The government announces the odd felicitation event but the dignity of this difficult work remains unacknowledged.