More than 100 households in the northern Assam hamlet of Xandohkhuwa have boosted their incomes from beekeeping. Even farmers who do not keep bees have benefitted as the bees’ activities have increased the fertility of the neighbourhood’s crops and fruit trees.

“Production of foods such as mustard, coconuts, areca nuts, litchis and mangoes is increasing in the village due to the presence of bees,” says Nitul Bhuyan, who introduced beekeeping, or apiculture, to the Lakhimpur district some 12 years ago.

“It is making people aware of the importance of bees,” he adds.

Bees and other insect pollinators are vital for human life, fertilising close to 75% of the world’s food crops, according to the UN Food and Agriculture Organisation (FAO). 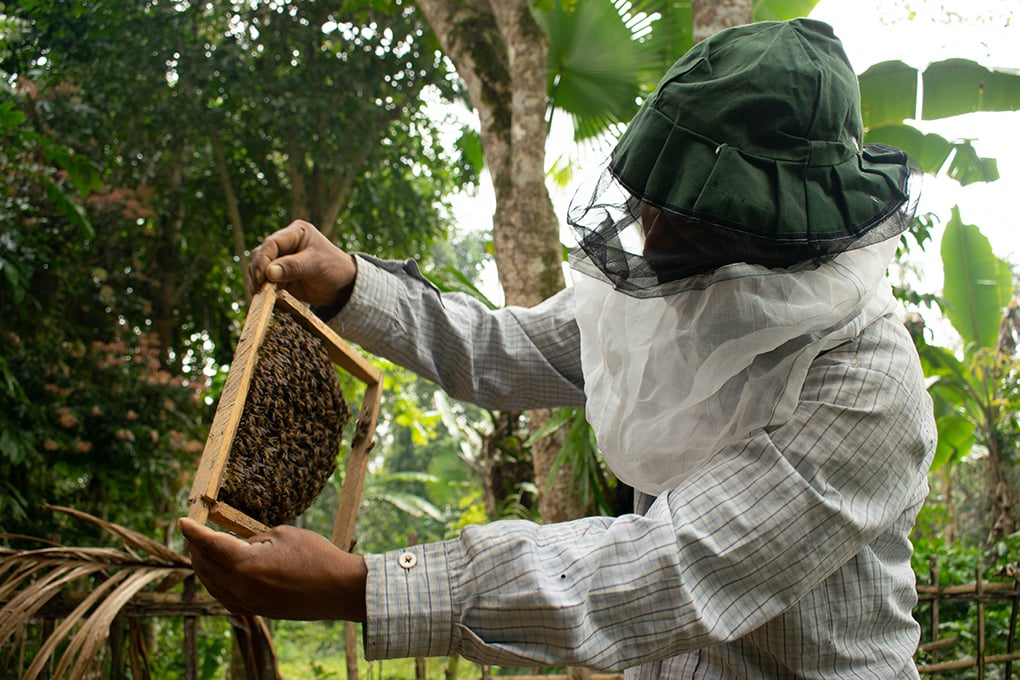 The role of honeybees and other insects is not limited to agriculture, food security and nutrition. Without them, wild plants and the ecosystems that make the planet habitable would collapse, the FAO says.

Yet it has found about 40% of the roughly 30,000 species of invertebrate pollinator species are facing extinction due to pesticides, shifts in land-use and climate change.

Managed honeybee populations have fallen dramatically in many parts of the world – This “unsustainable” level of annual losses has become routine there, and is still rising, as Scott McArt told ABC News. In parts of China, farmers have had to climb ladders to hand-pollinate fruit trees.

In 2000, the UN Convention on Biological Diversity set up the International Pollinator Initiative (IPI), seeking to protect and conserve bees to ensure a sustainable future for agriculture.

It was not easy for Bhuyan to convince his fellow-villagers to keep bees because of superstitious beliefs associated with them.

“People used to associate bees with devtas (gods), and were hesitant to rear them in their homes,” Bhuyan says. He worked hard to explain “the benefits of bees for the environment and us humans.”

Slowly the word spread and now there are 800 hives spread among a sixth of the village’s 600 households.

Bhuyan, 38, now supports his family of six solely on beekeeping, through honey sales from his own bees (he has 340 hives), building hives and running apiculture workshops to train others. 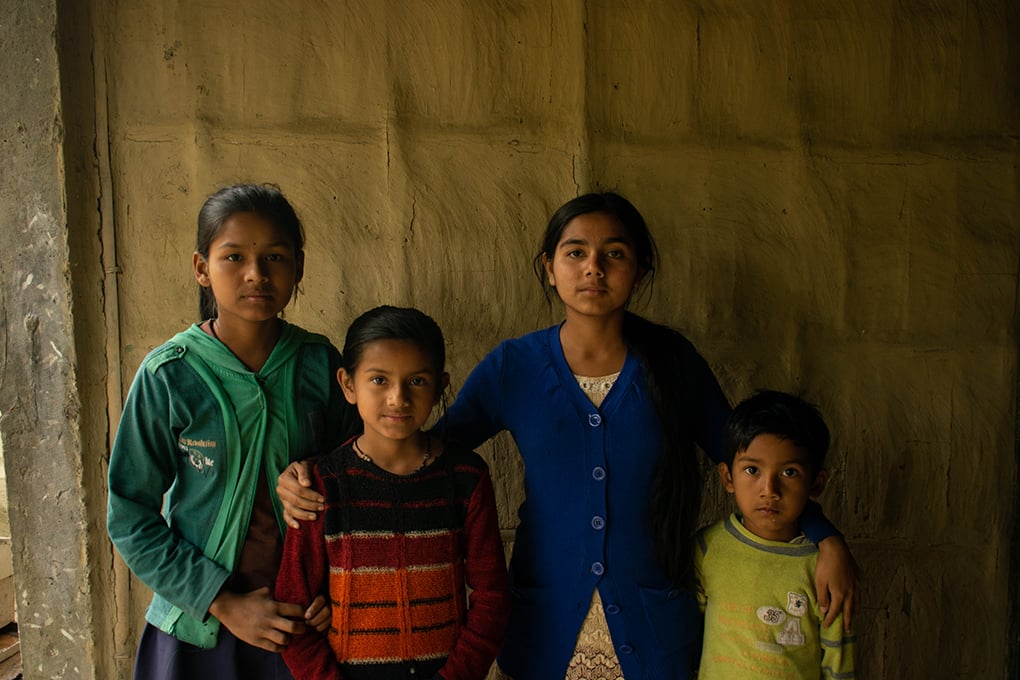 He fell into beekeeping accidentally, after taking home a wild hive that he found while cutting down a tree. The bees died. In that time, however, he had sought help from Assam Agricultural University’s Regional Agricultural Research Station (RARS), where he learned how to keep managed honeybee colonies.

His first yield was only half a kilogram of honey. This year the villagers expect to harvest at least 1,000 kilograms (or 10 quintals) of honey. Honey sells for around 400 rupees a kilogram (USD 5.2), so the village yield brings in cash income totalling Rs 400,000 (USD 5,200).

Bhuyan often runs apiculture workshops in nearby districts like Silapathar and Dhemaji, training people new to keeping bees, and acting as a resource for RARS’ outreach work. His practical sessions explain the intricacies of the topic in detailed yet simple terms that draw on his knowledge of the villagers’ routines.

Newly-made, empty bee boxes are stacked on the veranda of his home. “The best wood to make bee boxes with is outenga wood. We also use wood from jackfruit trees. But it isn’t suitable for use during the monsoons, as bees refuse to stay in jackfruit wood boxes during the rains,” Bhuyan says. “We also use wood from mango, neem and simolu (silk cotton) trees which are available in the village.”

Bhuyan only sells hives to people who know what they are doing: “We offer to train people who have no experience in beekeeping.” Basic start-up costs for a hive containing bees are Rs 2,500 (USD 33), and Rs 1,500 for empty hive boxes.

Last winter, Bhuyan and his fellow beekeepers loaned their bees to local farmers to increase the mustard crop. They moved nearly 100 beehives from their homes to nearby mustard fields during December and January, the peak flowering season, spreading them across 100 bighas (approximately 50 acres).

Mustard flowers cannot self-pollinate and need the help of insects to carry pollen between different flowers. “Mustard is a cross-pollinated crop and cross-pollination does not occur naturally. So this is where the bees come in. It has been established that there has been an increase in crop production by almost 30%, ” explained Prabal Saikia, Chief Scientist at RARS-AAU, who is involved with the project. 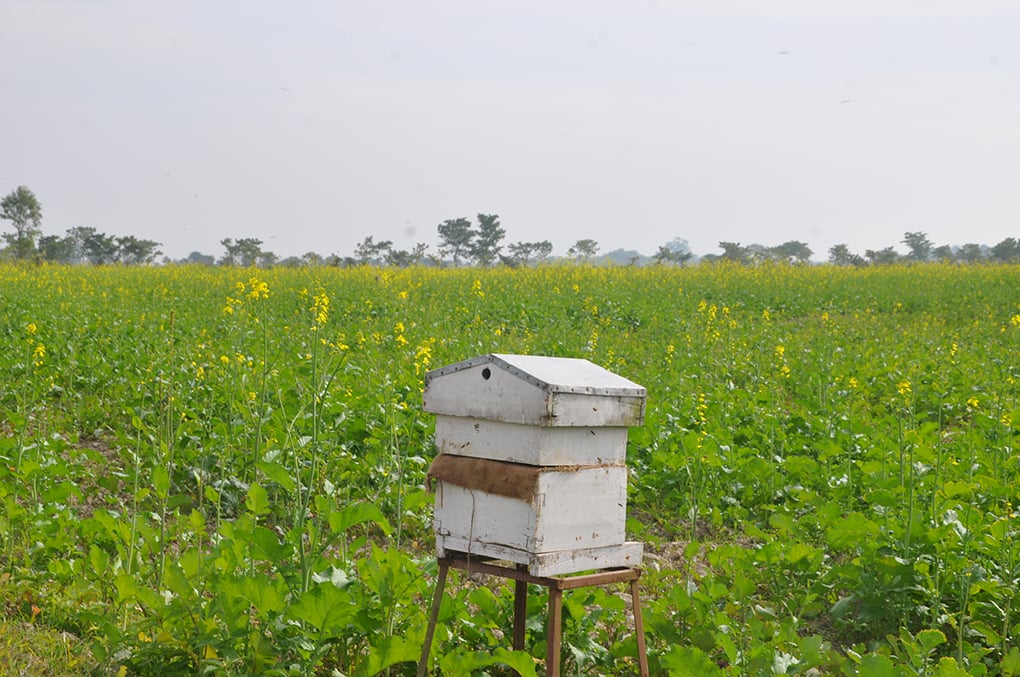 A beehive among mustard flowers [image by: Kasturi Das]

Over-wintering bees in mustard fields help to increase the annual honey crop, as well as aiding farmers who lack their own bees. In mid-winter, there are few flowers near the beekeepers’ houses for bees to feed on so fertilising the mustard crop helps everyone.

Saikia said rearing bees has also promoted increased fruit crop production near the beekeepers’ own homes during the rest of the year.

“The majority of the households in rural Assam are blessed with ample fruit and flower plantations,” Saikia said. Northern Assam is an overwhelmingly rural area with plentiful wild flowers and fruit and little pollution, well suited to bee-keeping.

The crop’s convenience has enabled villagers to maintain continuous production during the national lockdown due to Covid-19, he added.