For the past few months, Rombha Payeng has had fewer worries on her mind. The 33-year-old homemaker and farmer is able to feed organic vegetables to her two young daughters. Not long ago this was an inaccessible luxury for the family.

Payeng lives on Majuli, the largest river island in the world. Majuli, in the northeast Indian state of Assam, is a 553-square-kilometre island in the Brahmaputra River. Around 170,000 people belonging to 11 ethnic groups live on the island.

Between 1914 and 2016 Majuli shrank by nearly 30%. Over the past 50 years soil erosion, amplified by annual flooding, has accelerated, robbing the picturesque island of much of its area and vegetation, and wreaking havoc on livelihoods.

The monsoon is particularly difficult. “We are completely cut off from the rest of the world for nearly four to five months every year when the floodwater submerges our homes and fields, leaving us marooned on the island,” said Payeng. “Luckily, the bao paddy [flood-resistant red rice] that grows here helps us to run our livelihood. But the vegetables grown are washed away in the floodwater.”

Rombha Payeng in front of the raft where she grows vegetables (Image: Gurvinder Singh)

“My two daughters were not getting a healthy diet,” added Payeng.

“Fortunately, the situation has changed now, as my daughters ate ladyfingers [okra] and other vegetables for the first time this year,” she said, pointing to rafts laden with beds of crops floating on the pond near her stilt house.

Introduction of floating agriculture in Majuli

Irshad Ali, the sub-divisional agricultural officer for Majuli, told The Third Pole that around 9,270 hectares of land is cultivated on the island, with 31,420 people dependent on this for their livelihood. About 18% of Majuli was affected by flooding in 2017. In 2019, around 1,875 hectares of cropland were damaged due to floods.

In response, the South Asian Forum for Environment (SAFE), a non-profit working to advance sustainable development, has introduced new methods to help people cope with the increasing unstable climate. In 2017, it introduced floating agriculture in Majuli.

“Initially, we adopted a hydroponics [where plants are grown in nutrient-rich water instead of soil] method of farming that involved floating rafts for cultivation,” said Chiranjeet Chatterjee, the director of programmes at SAFE. Vegetables were grown in water-soaked, non-biodegradable sponge material on rafts made of bamboo. “Farmers were able to grow some vegetables but it was not a long-term solution,” Chatterjee explained, because the rafts tended to rot. 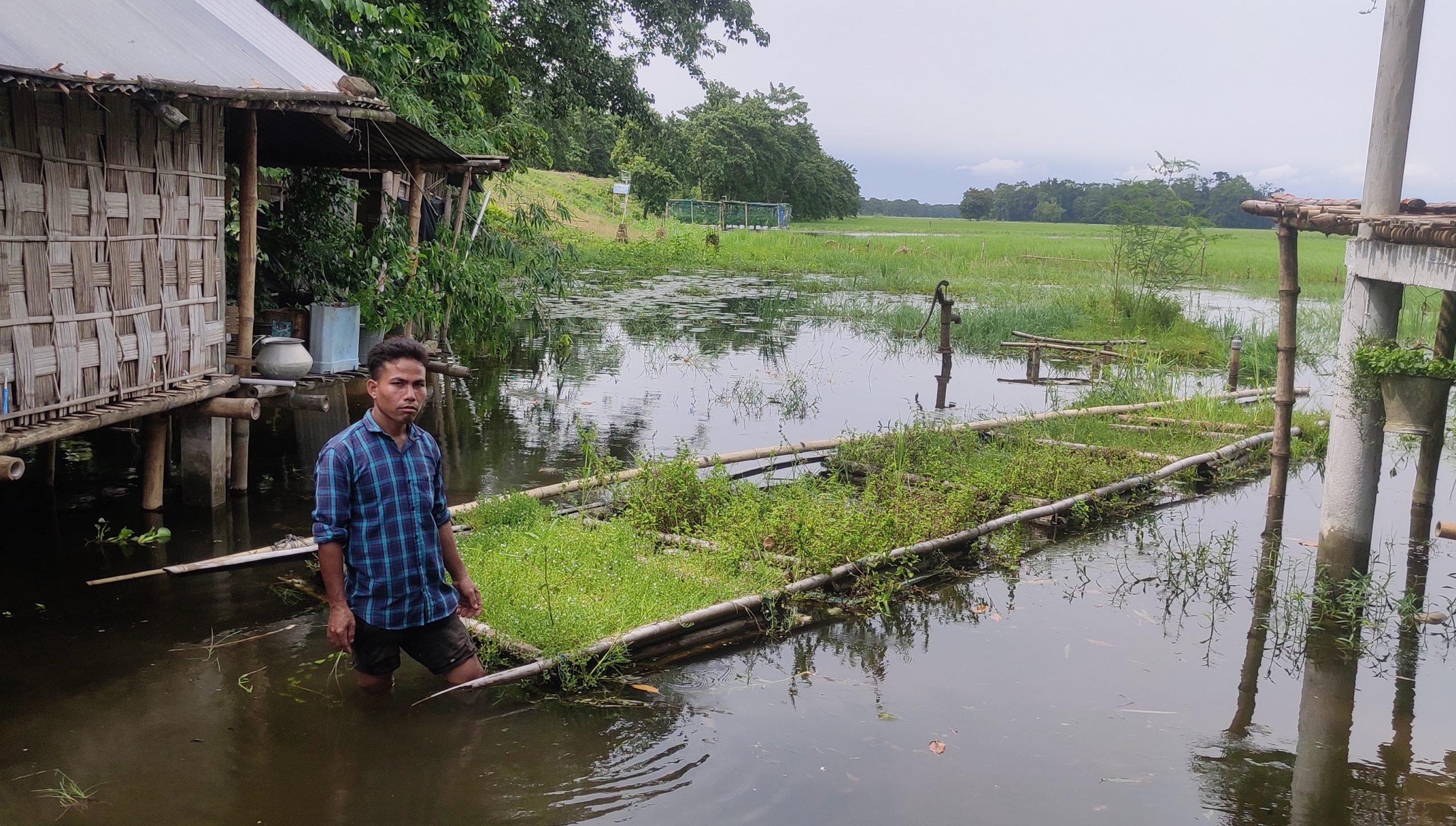 Farmer Bolin Payeng with the original model of raft, which is no longer being promoted because it rots quickly. Payeng is growing brinjals (aubergines), king chillies, tomatoes and ladyfingers (okra). (Image: Gurvinder Singh)

In April this year, SAFE introduced rafts made of bamboo that are kept afloat using drums, “which are more durable”, Chatterjee said.

Instead of growing plants in sponge beds, vegetables are now cultivated in grow bags on the rafts. These are filled with compost, coco peat, biochar, sawdust and organic fertilisers.

As well as being watered manually by the farmers, solar-powered pumps provided by SAFE water the plants. These pump water up from the pond and into the grow bags, through an irrigation system installed on the platform. The grow bags retain moisture and minimise water loss; holes in the bags mean that excess water can drain away into the pond.

The entire structure is covered with nets to stop birds from eating the harvest.

As the platforms rise with the water level, flooding does not damage produce grown on them. In conventional agriculture crops are washed away or rot from being waterlogged during flooding. 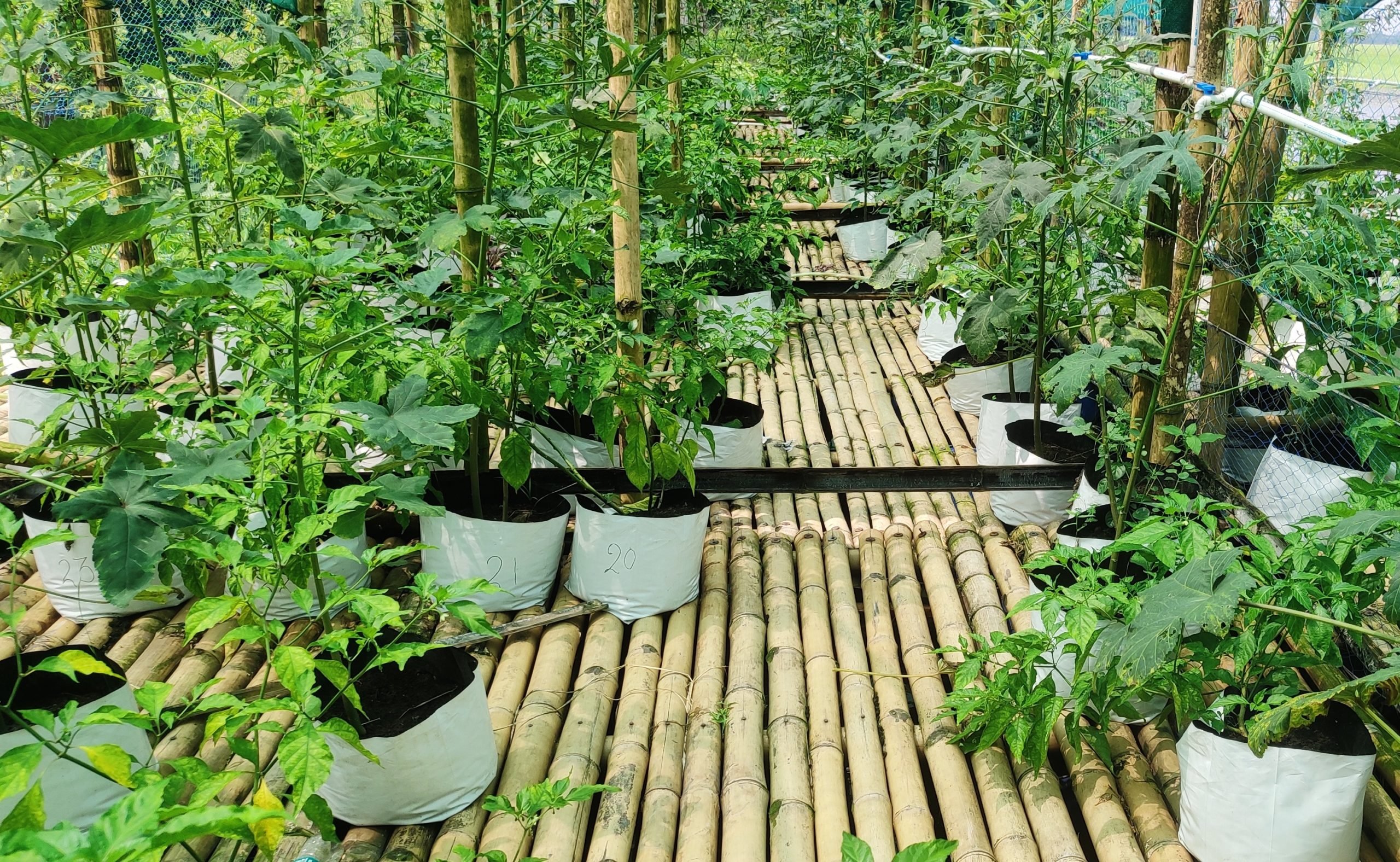 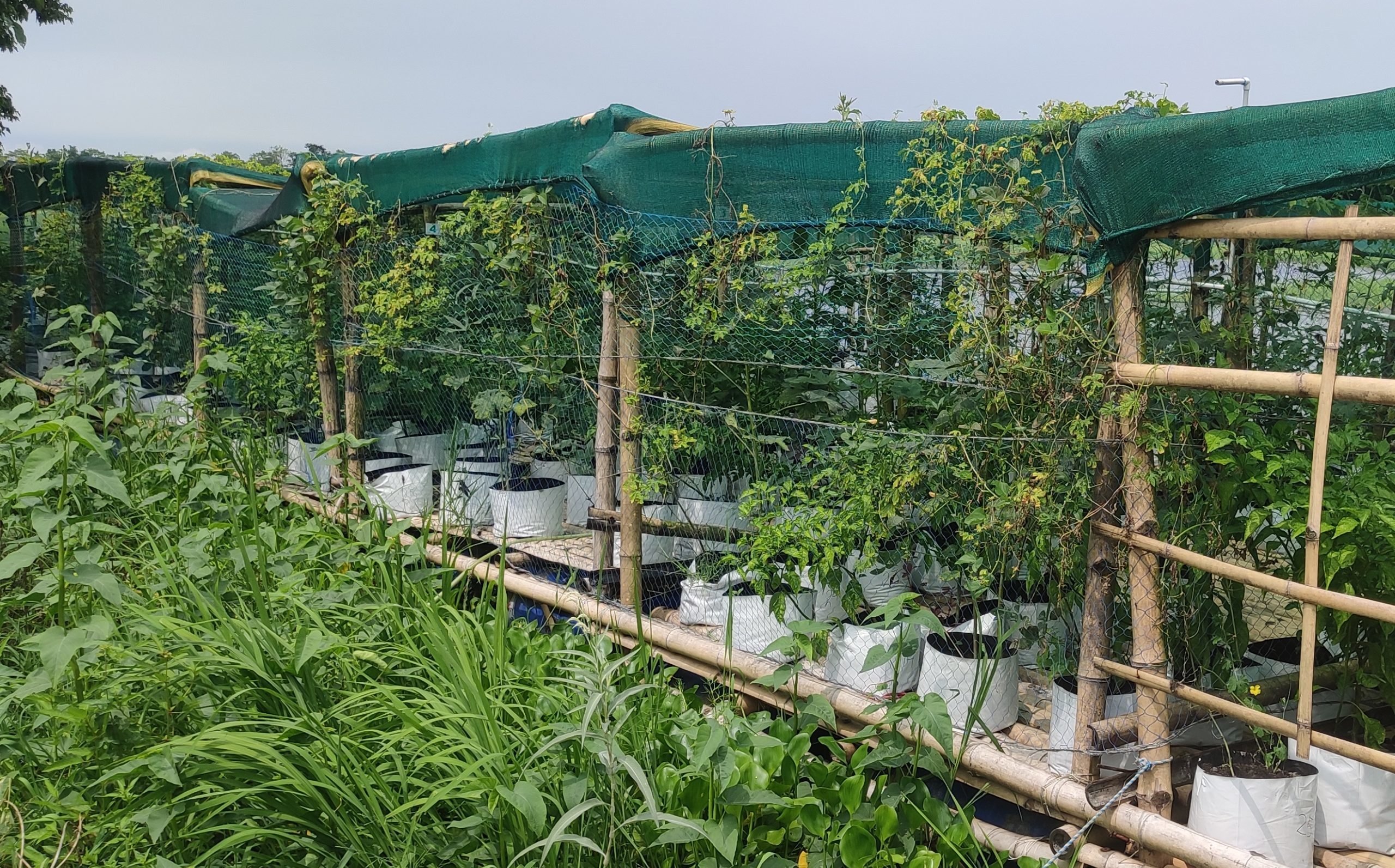 On a typical floating bed the plants are grown in separate grow bags (Image: Gurvinder Singh)

Saben Kalita, a field coordinator at SAFE, said that each platform can accommodate 25 grow bags. Currently, there are 55 of the new design of raft being used by farmers on Majuli.

In some areas, fish farms are set up in the same body of water as the floating vegetable bed. “The construction of each floating tray with introduction of fish culture in the same water body costs around 20,000 Indian rupees [USD 270],” Kalita said. “The method is cost-effective in comparison with traditional agriculture with no requirement of tilling and sowing. Besides, the solvent [compost] can be recycled for reuse too.”

The floating beds are less labour-intensive than field agriculture, which requires digging, planting and irrigation.

Bolin Payeng, Rombha’s husband, said he was pleased with the new floating farm beds. “The floating beds have long-term durability and help us to grow vegetables of our choice and feed them to our families, besides selling them in the market. We are happy to taste vegetables on this island that remains submerged with water [for large portions] of the year.”

“We have cultivated around 25-30 kilogrammes of king chilli… along with 45-50 kg of ladyfingers and bottle gourd from 20 trays this year,” said Jonaram Payeng, another farmer in Majuli (not a relative of Rombha Payeng). “The vegetables are fresh and completely organic. We consumed most of them and sold the rest. The priority is to offer healthy food to our families as we hardly grow vegetables here because of the floods.” 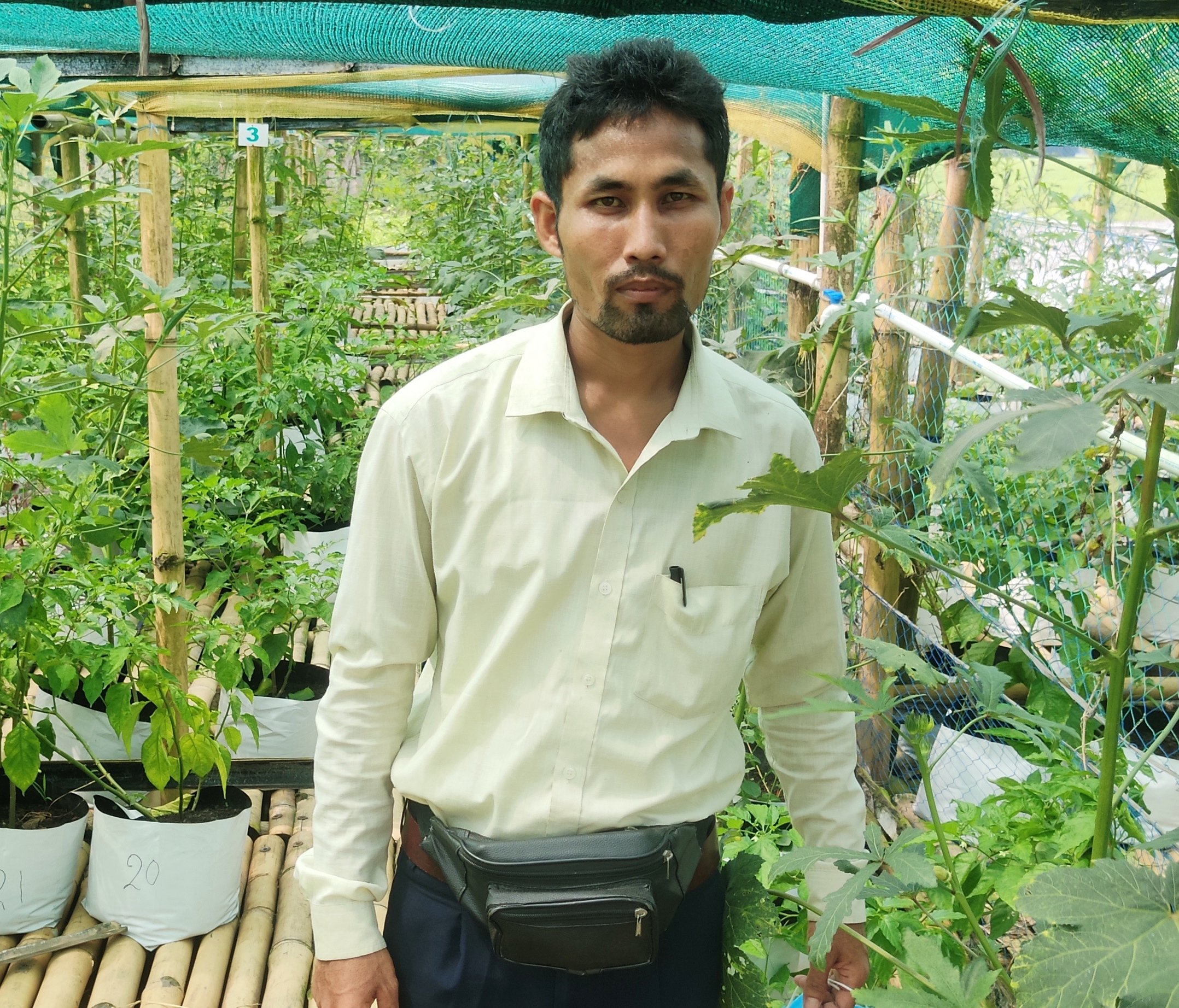 Jonaram also grows flood-resistant paddy on his 0.40 hectares of land. He said that as the monsoon becomes more unpredictable, more farmers might need to turn to methods like floating farm beds. “We depend on bao paddy for our livelihood and the floods are an important phenomenon as the paddy grows under the water, but there have been no major floods this year.”

Ordinarily, flooding prevents farmers from growing vegetables. But this year the opposite has happened: a lack of rain has damaged the paddy crop. Prior to a wave of flooding in Assam that started at the end of August, the weak monsoon this year has meant water has not arrived when farmers expect.

Until now the farmers using floating platforms on Majuli have only made small profits by selling their crops to local markets. The main use of the crops has been to help provide better nutrition to families. As the project expands, SAFE’s director of programmes Chatterjee said, there is hope for greater profits – especially as the materials needed, including the compost, can be developed locally by farmers.

The initiative has expanded to flood-affected regions in the Sundarbans in the Indian state of West Bengal, as well as Saharsa in Bihar in 2019. In 2020, it was also implemented in Bangladesh.

Rafts introduced by the South Asian Forum for Environment since 2017

“We have already trained 2,500 farmers [in total] since 2017, mostly women,” said Kalita, the field coordinator of SAFE. He added that the model also allows communities to farm fish, crabs, ducks and pigs.

“We have so far constructed 260 floating farm beds in India and Bangladesh.”

Government officials from the state agriculture department told The Third Pole that floating farms are the future of agriculture on Majuli.

“The non-profits have successfully demonstrated the use of floating farm beds for farming on the island. The government should step in and offer logistical and other support to the farmers, as setting up floating agriculture is a costly affair,” said Irshad Ali, the sub-divisional agricultural officer of the island district.

“The technique is not only helpful for this island but also for low-lying areas in other parts of the country that suffer crop loss and other damages due to floods,” Ali said.

He added that his department has started another project on Majuli using water hyacinth to create floating organic vegetable beds. “Such efforts need sustained long-term support from the government.”

“The method encourages no-tillage and organic farming,” added Kumar Pathak. “Float-farming beds in inundated areas are irrigated with solar micro-irrigation, reducing water energy footprints.” Other benefits of floating farms are that they require less space than conventional farming and do not need pesticides.

As Pakistan bans water-guzzling rice, one farmer has an alternative