Pashmina goat herders in Ladakh are struggling with dramatic changes to snowfall and rain that have shrunk and shifted their grazing grounds. For some, rising tensions along the disputed border between India and China have reduced the available pasture further.

Climate change has already changed the life and routines of Tsering, 57, a woman herder in the high-altitude valley of Gya-Miru, where much of the area is above 3,000 metres.

In 2016, when Tsering was the subject of the award-winning documentary “Shepherdess of the Glacier,” she had 330 sheep and pashmina goats. Since then, her flock has shrunk to around 270, due to receding grazing grounds and diminished water resources. Glaciers are shrinking too. Ladakh’s largest glacier is Drang Drung, which shrank by 13.84% from 1971 to 2017. 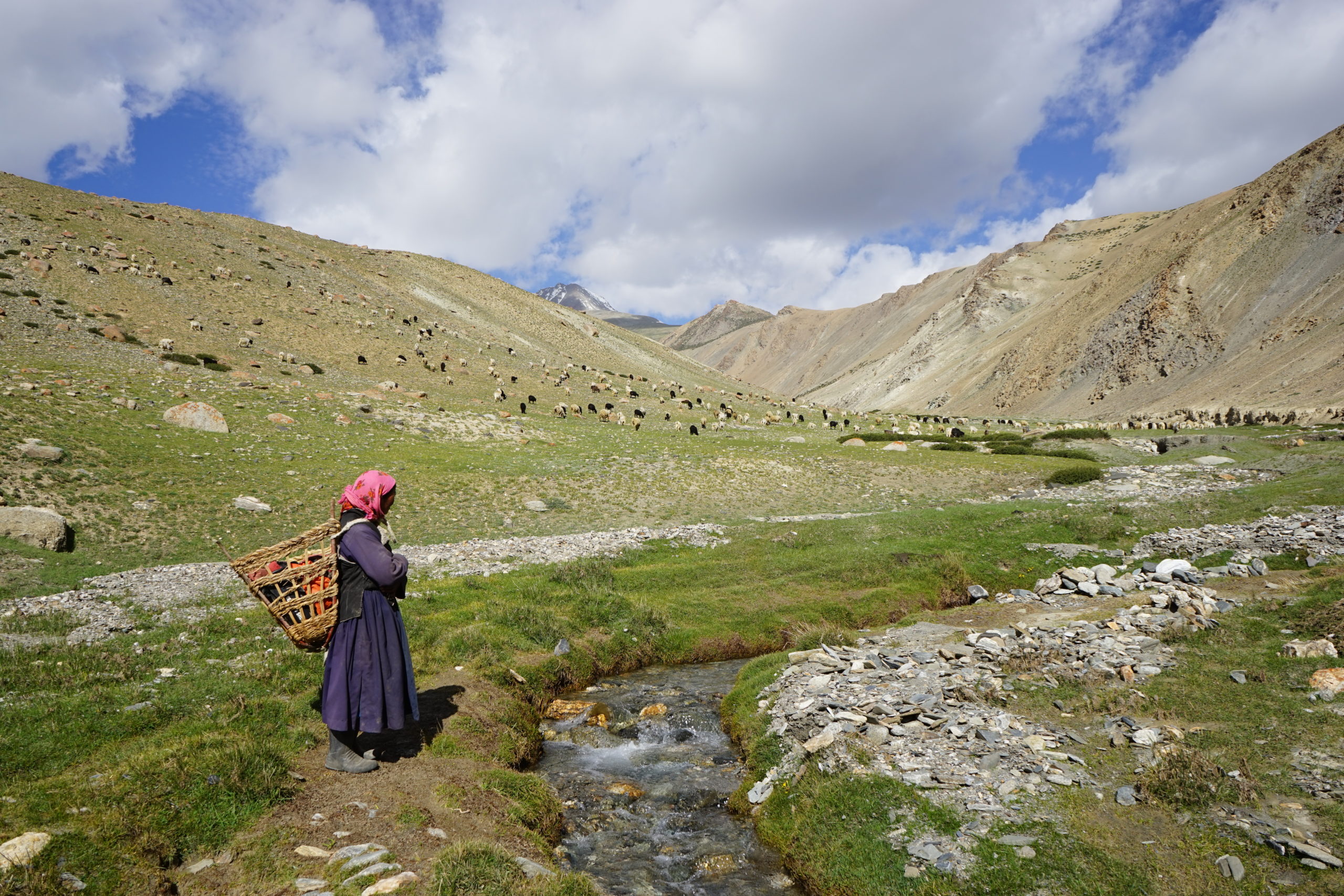 The shepherds and their flocks are critically dependent on dwindling water sources [image by: Stanzin Dorjai Gya]

Tsering has seen the valleys around her transformed for the worse in the four and a half decades since she began herding at the age of 13.

“The valleys were rich in grasslands and in water sources in my youth,” she said. “Now we are running increasingly short of both.”

Tsering, whose detailed knowledge comes from walking with her flock up to heights of 6,000 metres, said one of the most visible manifestations of climate change is that springs are drying up because there is less precipitation than earlier.

“Life in Ladakh depends on snow. The region’s water comes from the snow melt. It provides the moisture for farming and pastures. Glaciers formed by snow feed the streams that are the lifeline of the tiny settlements,” said Tsewang Namgail, Director and Senior Scientist at Snow Leopard Conservancy India Trust.

“On the other hand, the unusually high rainfall in summer is a new reality in Ladakh. But it doesn’t help the region. It doesn’t enrich the water table. Ladakh’s rocky terrain can’t ingest the rainwater, hence pushes it downwards in the form of a flood,” Namgail said. 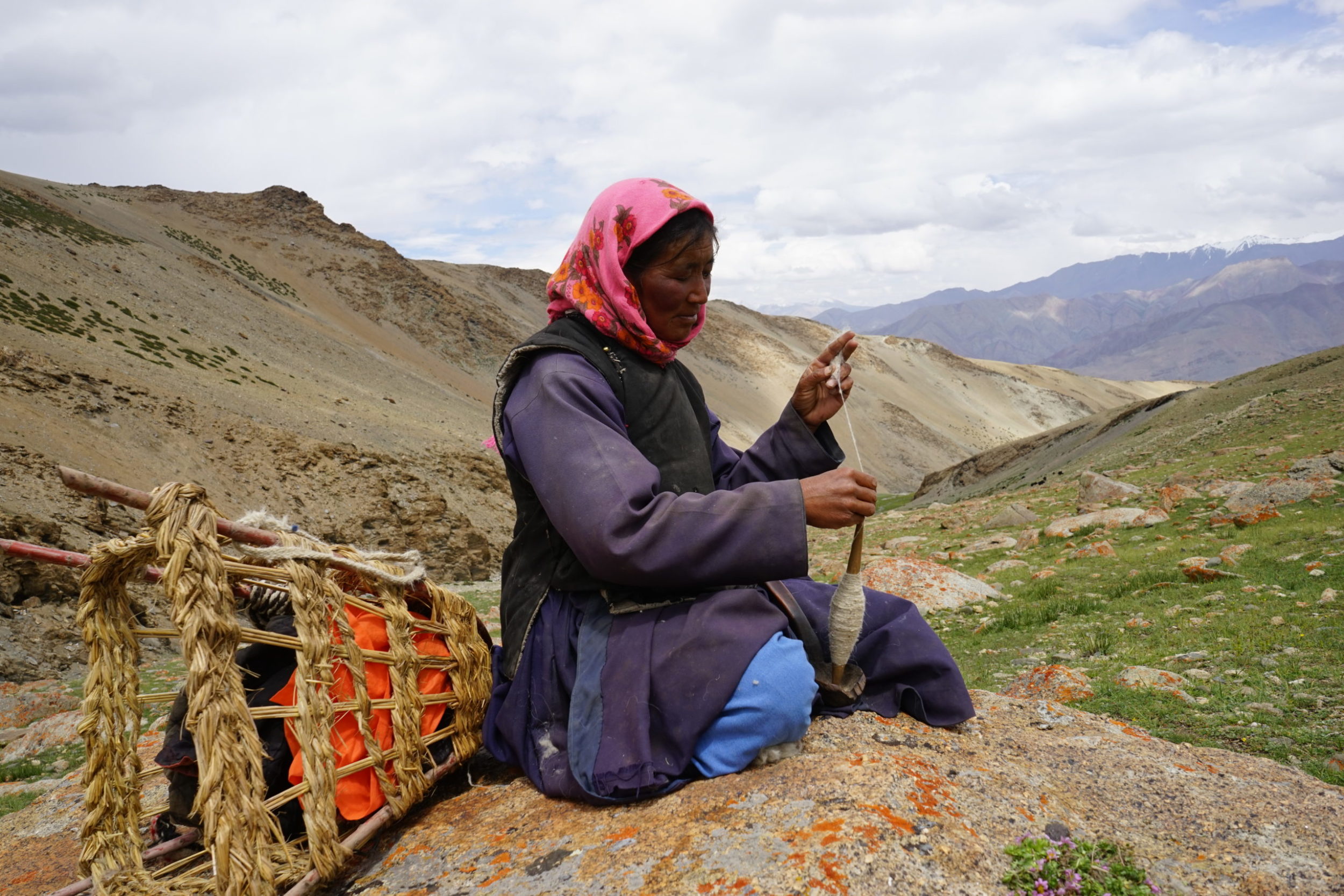 Wool from their pashmina goats are the wealth of the shepherds in Ladakh [image by: Stanzin Dorjai Gya]

Since 2005, Ladakh has witnessed eight floods. In August 2014, a glacial lake outburst flood swept into Tsering’s village of Gya, destroying houses, fields and bridges. Deadly flooding in August 2010 wrought havoc in more than 70 villages and towns including Ladakh’s capital, Leh, and killed 255 people. The flood was triggered by a cloudburst which dropped 350 millimetres of water, equal to three and a half times annual rainfall.

Meanwhile, snowfall has drastically reduced. The problem can be seen in receding glaciers. Even artificial glaciers made to store snow near villages as a defence against climate change are melting. Chewang Norphel, the civil engineer who pioneered this adaptation technology said that only five of his 15 artificial glaciers survive.

“The reason is the reduction in snow at lower altitudes,” Norphel said.

People have been forced to migrate from some villages because declining precipitation has been so extreme that they can no longer grow crops. Kulum, 50 kilometres south of Leh, is one of six such villages in Ladakh. In 2012, the stream through Kulum dried up, leaving the 11 families no option but to leave. 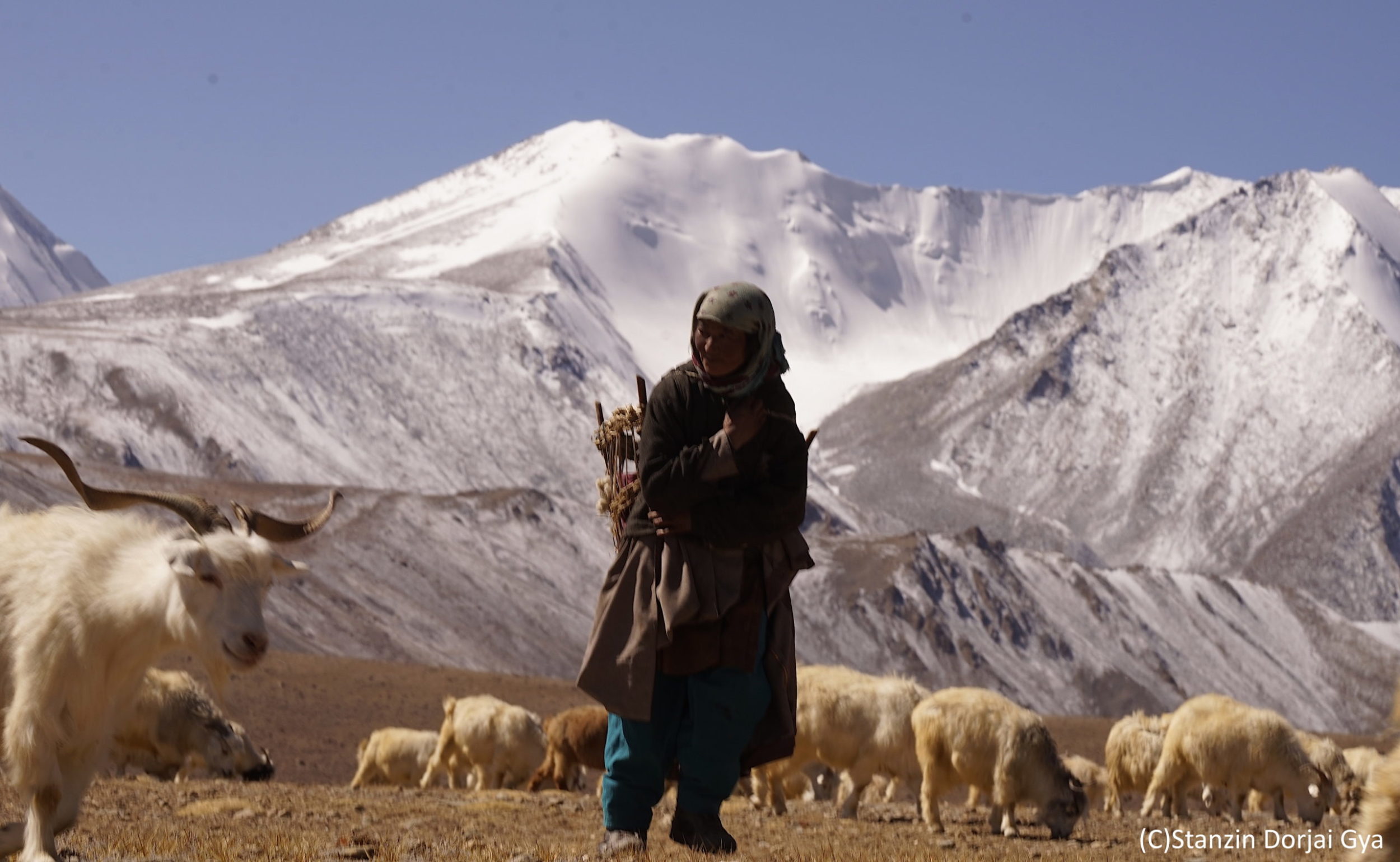 The flocks range tremendous distances in the cold desert of Ladakh [image by: Stanzin Dorjai Gya]

Villagers in Pishu in the Zanskar region are also mulling migration. In 2018, water scarcity prevented them from growing any crops. The then state government of J&K of which Ladakh was a part, offered INR 1,000 (about USD 14) to each household which they rejected as too meagre to be of any help.

A recent region-wide study carried out across Jammu and Kashmir and Ladakh, has revealed a loss of about 70.32 gigatonnes of glacier mass. The study included contested areas across the Line of Control (LoC) – between India and Pakistan, and the Line of Actual Control (LAC) – between India and China, as the high-altitude border areas are important for snowfall and glacier formation.

Researchers from the University of Kashmir studied 12,243 glaciers for thickness, using two sets of satellite observations, one made in 2000 by NASA and in 2012 by German space agency DLR.

“Depleting glaciers have a far-reaching impact,” said Shakil Ramshoo, who led the research team. “Definitely, the quality of grasslands in Ladakh has been degraded.”

For Tsering, the dried out and scanty pastures have forced her to travel longer distances and to climb higher to find grazing for her flock. She follows the centuries old pattern of rotational grazing, starting the year camped in the winter valley (or gunlung), then treks up through summer pastures (or yarlung) before returning to her winter pastures.

“As the snowline has gone up, moisture has moved up too, and so has the vegetation,” said Tsering. “This is why sometimes I have to travel 20 to 40 kilometres away from my home”. 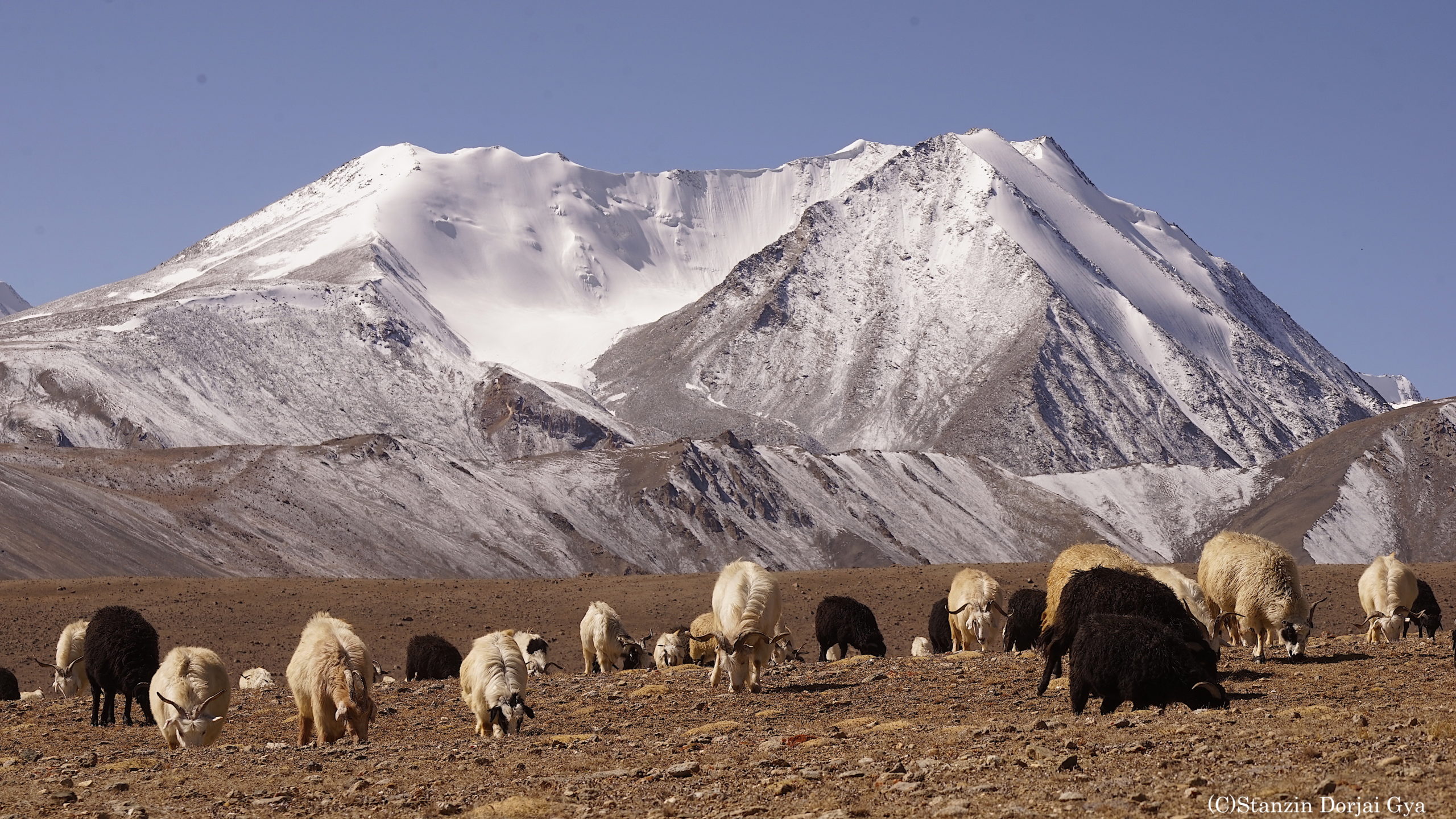 There is little pasture land left for the pashmina goats in Ladakh [image by: Stanzin Dorjai Gya]

Gya is a high-altitude village of 140 households and roughly 668 people (according to the 2011 census), between the Indus River valley and Tanglang La Pass on the Leh-Manali Highway.

Miru is slightly smaller, with 500 people. Both villages are known for their ancient pastoral way of life, which also brings them income from tourists.

Families and flocks at risk

But the changing climate threatens their pastoralism and with it their tourist revenue: the number of nomadic families is falling. In 2020, there were 13 herding families in Gya-Miru, down from 18 in 2018, according to local animal husbandry officer Tundup Bbu.

However, overall livestock numbers have dwindled across the larger Changthang region in Ladakh. Mohammad Abbas, district animal husbandry official for Leh, said there are around 320,000 sheep and goats in the Changthang region, of which 220,000 are Pashmina goats. But this, according to Abbas, is a drastic decline from what the records of his office show to have been half a million animals a decade ago, mostly Pashmina.

The Pashmina, also known as Changthangi goats, are unique to the region. The fine wool brushed from their winter undercoats is amongst the most prized in the world. So much so that “Pashmina” is a byword for beautiful shawls in the region, even though few are made from 100% Pashmina wool. They are becoming even rarer as the grazing ground for the goats disappear.

The number of herding families went down to 2,000 from 2,600 in the same time period, Abbas said.

“Less snowfall deprives the lower altitudes of moisture and this in turn impacts the growth of grass,” said Abbas, “And this, in turn, reduces the capacity of pastures to feed more livestock.”

The ongoing military stand-off with China along the Line of Actual Control has added to pasture shortages for herding families in Changthang. The 3,400 kilometre demarcation line runs through the Darbok administrative sub-district; recent tensions have severely affected nomads in the villages of Merak, Phobrang, Lukung and Chushul.

The ceasefire line dates from the 1962 war between India and China which concluded without a peace treaty. Fighting broke out in June 2020 for the first time in decades, leaving at least 20 Indian soldiers, and an undisclosed number of Chinese ones, dead. Both sides have reinforced the truce line since, making access for herders impossible. The most recent skirmishes were in January on the LAC in Sikkim province in the eastern Himalayas.

“We have lost winter pastures to China leaving nomads to fend for themselves,” said Chushul councillor Konchok Stanzin. “Our winter grazing areas along the border are out of bounds for us. We cannot take our flock to summer pastures as they are under heavy snow.”

Concerned by the dwindling numbers of Pashmina goats in the region, the government has begun incentivising herders to rear them, giving aspiring goat farmers 20 pashmina goats free. “We have so far set up around 400 units in Changthang,” Abbas said. There have been efforts to clone the goat. Little of this matters if the habitat is no longer there.

Pasture degradation has made it difficult to sustain increases in the flocks. One area where pastures have been “significantly impacted” is Korzok area, the animal officials said. At an altitude of 15,000 feet (4,572 metres), Korzok is considered the world’s highest permanent settlement.

At Gya, Tsering persists in her way of life as the scenic valleys around her gradually succumb to the effects of climate change. She hopes the heavy snowfalls will return and the grasslands will flourish again

“I have cut down on my flock,” said Tsering. “I may have to reduce more as long as the pastures keep shrinking.”

Interview: Innovations coming out of India beneficial for all

Sand mining is stealing the minerals from Chinese rivers