A sustainable international food system that feeds people better would be a global “win-win”, according to a major scientific report that calls for urgent action by individuals, governments and industry.

The study by the EAT-Lancet Commission on Food, Planet and Health, a collaboration between EAT Foundation, The Lancet, Wellcome Trust and the Stockholm Resilience Centre, outlines the ideal healthy diet and what needs to happen to make sure it is grown in a way that safeguards the environment.

The authors of the study, who are international experts in health, nutrition and sustainability, identify two seemingly disparate challenges.

The first is that global levels of both hunger and obesity are growing. A significant proportion of people in the developing and developed worlds are undernourished because their food lacks essential nutrients. The report finds that unhealthy diets pose a greater risk of death and disease than unsafe sex, alcohol, drug and tobacco use combined.

The second problem is that the world’s food systems are unsustainable. Food production is one of the largest drivers of local and global environmental damage. It contributes to climate change, biodiversity loss and freshwater use. It interferes with the global nitrogen and phosphorus cycles, and changes how land is used. In fact the global food system, from fertiliser manufacture to food storage and packaging, is responsible for up to one third of all anthropogenic greenhouse gas emissions, research shows.

Both these problems need to be addressed to meet the Paris Agreement on climate change and the UN Sustainable Development Goals, particularly those on hunger, health, water, life on land and below water, and responsible production and consumption.

The EAT-Lancet report concludes that these aims can be met by 2050 in a global “win-win”, even as the world population increases. “However, achieving this will require major change to happen very fast through unprecedented global collaboration and commitment,” it says.

It notes that food systems have already changed dramatically over the past century, particularly in countries such as China where a shift from more traditional diets has seen a big rise in sugar, meat and dairy consumption. Moving to a more sustainable system will require efforts to encourage healthier eating, reduce food waste and reform food production.

Speaking at an event during the December UN climate talks in Katowice, Gunhild Stordalen, founder and president of EAT, said food is a key lever for change because it connects long-term abstract challenges to individual action. “Everyone cares about food… unlike climate and forests, food is so tangible. Through food, environmental measures suddenly become empowering.”

According to the report, an ideal diet mainly comprises vegetables, fruits, whole grains, legumes, nuts and unsaturated oils, as well as a low to moderate amount of seafood and poultry. This healthy diet has no, or very little, red meat, processed meat, added sugar, refined grains or starchy vegetables.

This is very similar to the existing Mediterranean diet. Research from the Spanish PREDIMED trial found that people who ate 30 grams of mixed nuts per day as part of a Mediterranean diet were 28% less likely to develop cardiovascular disease.

EAT-Lancet says this blueprint works for all food cultures and production systems because it can be adapted to local produce and tastes and scaled up. It says that, if everyone adopted such a diet, there would be much fewer global deaths between now and 2050. 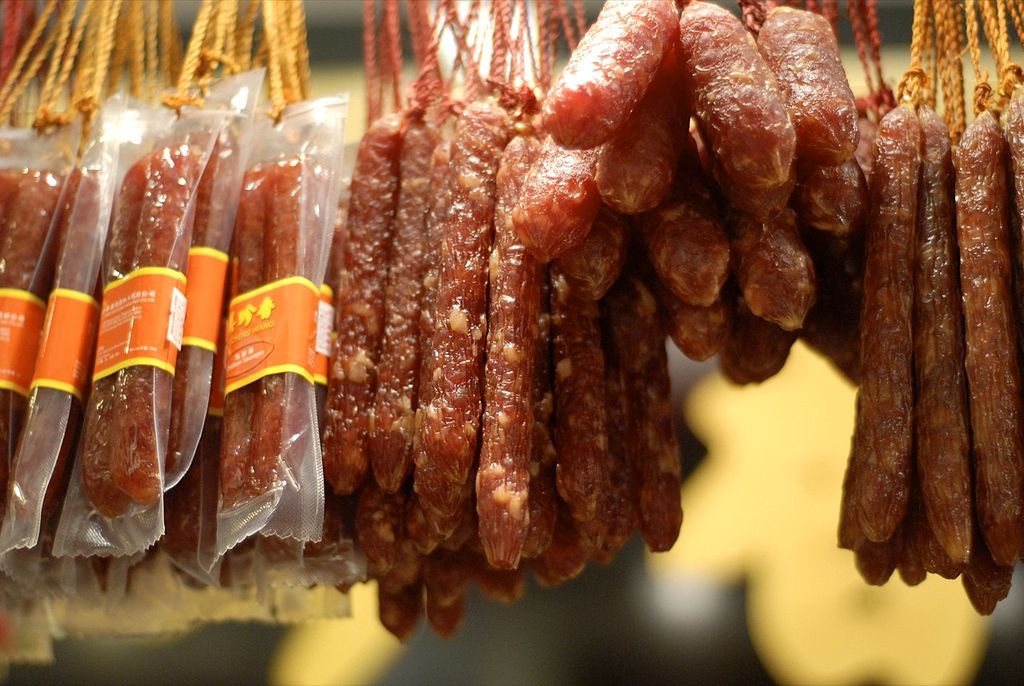 The ideal diet has no, or very little, red or processed meat such as this Chinese sausage. (Image: Mo Riza)

On the environmental side, the report sets out for the first time a “safe operating space” within which future food systems must function to be sustainable. This includes hard figures for how much food production can contribute to greenhouse gas emissions, biodiversity loss, water use and nitrogen and phosphorus pollution. For example, no more than five billion tonnes of carbon dioxide equivalent should be released every year, and agriculture must switch from being a source of carbon emissions to a store.

The commission says sticking to these limits would allow about 10 billion people to be fed healthily.

For this to happen agriculture needs to dramatically change. It cannot use any additional land, must reduce yield gaps and water use, slash nitrogen and phosphorus pollution by using fertilisers more efficiently and recycling phosphorus, and grow more crops needed for the ideal diet, such as nuts and pulses.

But the report avoids advocating particular farming systems, such as organic, saying such an approach would be too prescriptive.

The commission points out that the food sector does not have a global forum like the United Nations’ Conference of the Parties (COP) on climate change to draw together international players. Nor does it set targets for individual countries or sectors. But it says its science-based figures should be used to inform decisions by governments and businesses, which should work together with civic society to drive change.

It warns that countries and authorities may need to use tougher measures such as taxation, subsidies and new laws and trade deals, while businesses should consider a range of interventions, such as withdrawing unhealthy products and investing in better ones, using contracts to shape better supply chains and introducing consumer reward schemes.

Peter Bakker, president and CEO of the World Business Council for Sustainable Development, which also works on food and environmental issues, told chinadialoguethat business leaders have an important role to play. They need to develop and implement ambitious science-based solutions that reflect regional needs and cultural preferences.

“Leadership action is required across the value chain of nutrition and health, livelihoods and human rights, biodiversity and ecosystems, and climate mitigation and resilience. We expect that the transformation of food systems in the world will accelerate in the next two to five years, not dissimilar to changes we are seeing in the global energy system.”