Sukhi means happy. But there have been few happy moments in the life of 70-year-old Sukhi Begum. She has lost her home seven times in the past 50 years due to flooding and riverbank erosion by the Brahmaputra River. The mother of five still lives on a riverine island – called a char – and fears her home will be washed away again.

However, people are adapting in ways old and new. There are signs of hope. 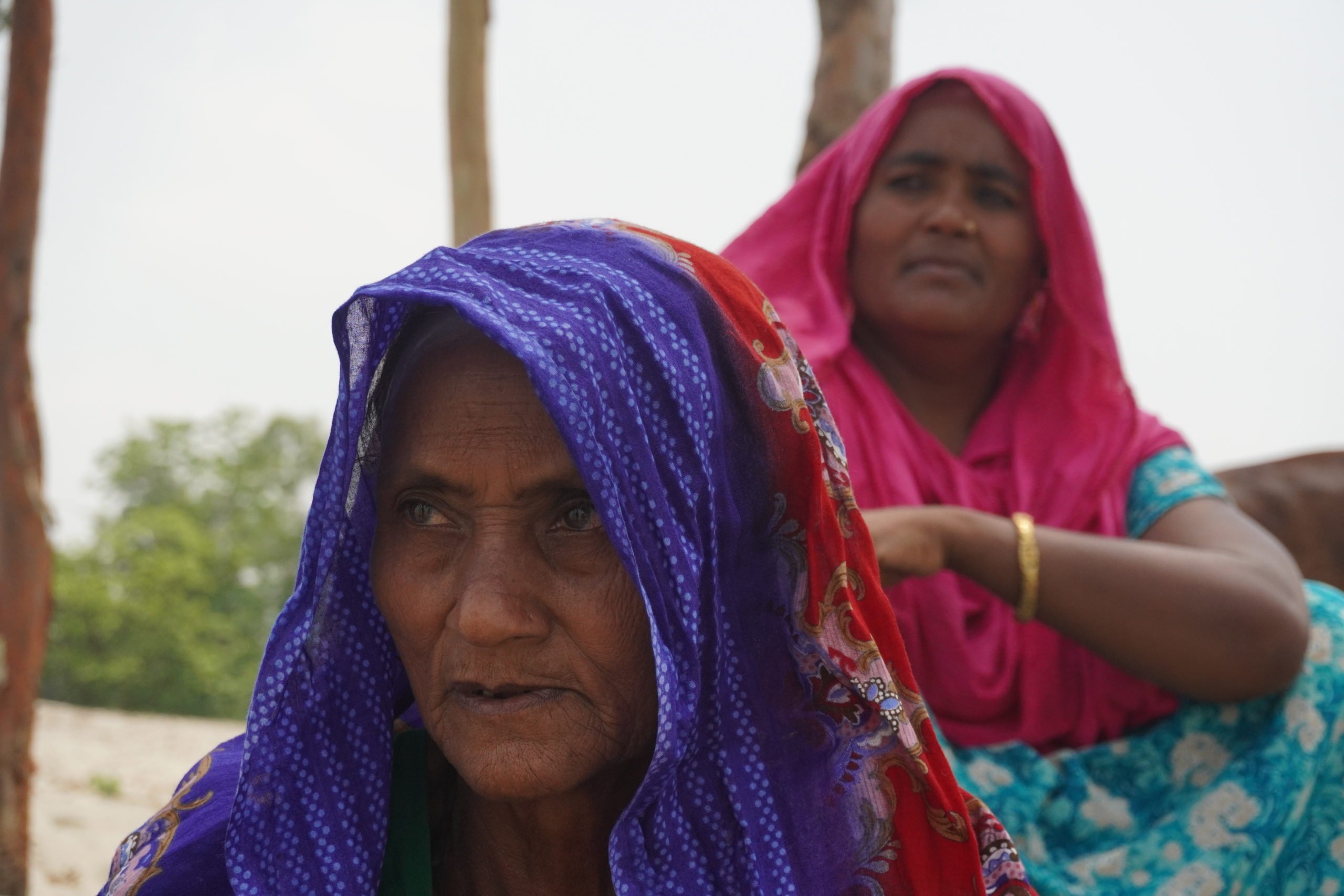 “We came to Pakuar Char of Sariakandi [in Bogura district of northern Bangladesh] around 50 years ago. I still remember the day when we were first displaced due to riverbank erosion. We built homes there to start a new life, but the river devoured our homes time and again.”

Still, Sukhi does not want to live anywhere else. She knows that floods destroy, but they also bring fresh silt from the Himalayas, making the chars the most fertile land in the Bengal delta. “I was born in a char and want to breathe my last in a char too.”

The formation of chars on the Brahmaputra

The Brahmaputra River carries one of the world’s highest sediment loads. Its sediment transport dynamics strongly affect the ecology and agriculture of northeast India and downstream Bangladesh.

“Each year, about 550 to 600 million tonnes of sediment come from the upstream areas through the Brahmaputra River,” said Malik Fida A Khan, executive director of the Dhaka-based Centre for Environmental and Geographic Information Services (CEGIS). “It does not carry all the sediment to the Bay of Bengal. It creates new chars on the riverbed.”

Khan said there are about 50 small and large chars on the Bangladesh section of the Brahmaputra and its tributaries, plus 20-25 large river shoals.

The Brahmaputra – called the Jamuna in Bangladesh – destroys chars and simultaneously adds to them by depositing silt. As it did so on one side of Pakuar Char, 34-year-old farmer Ziaur Rahman sowed jute, though he knew a flood could wash away his crop at any time, especially during the June-September monsoon. He has shifted his home to a relatively more permanent island – just another way of adapting to the floods that are becoming more frequent due to climate change. 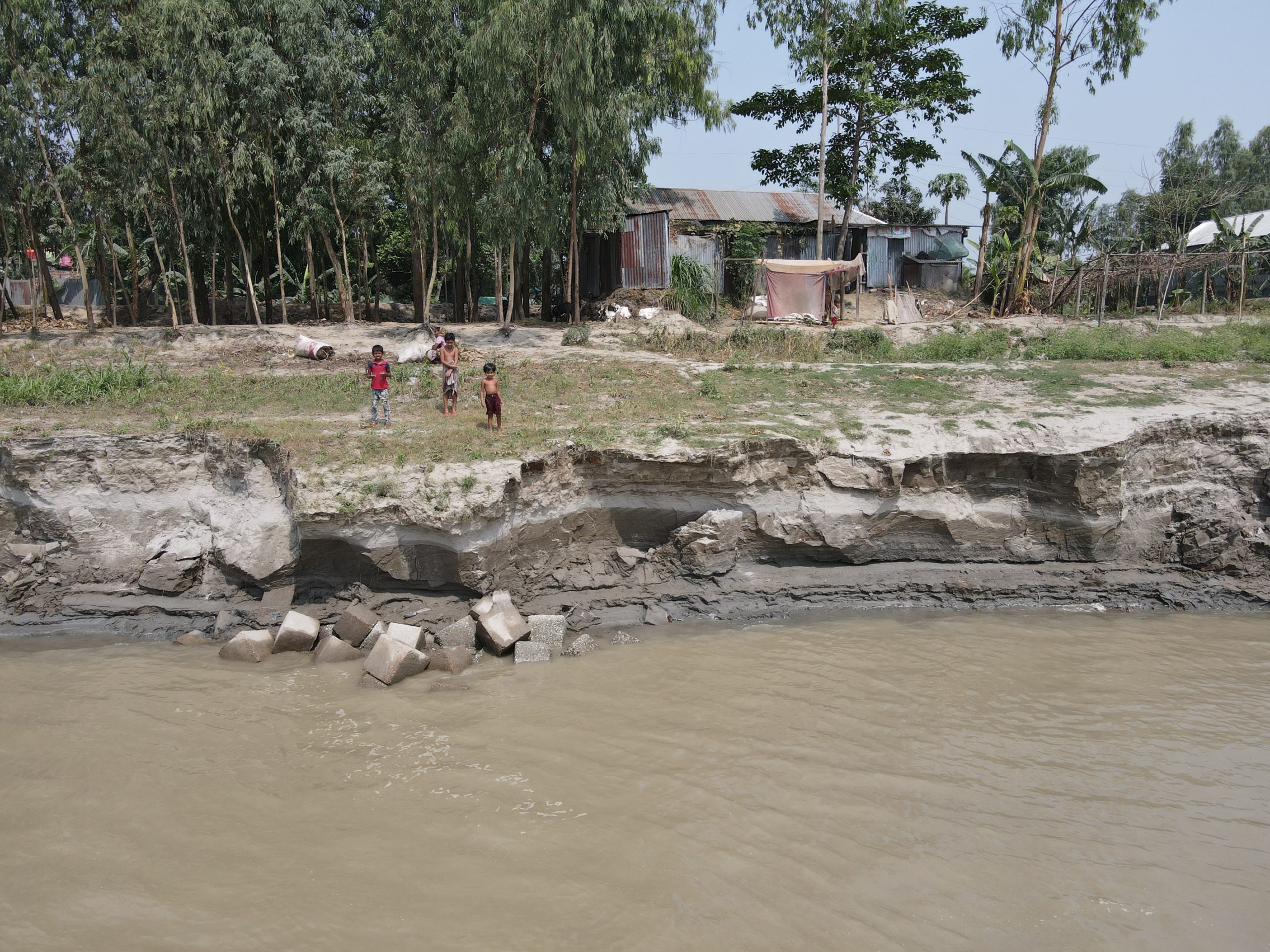 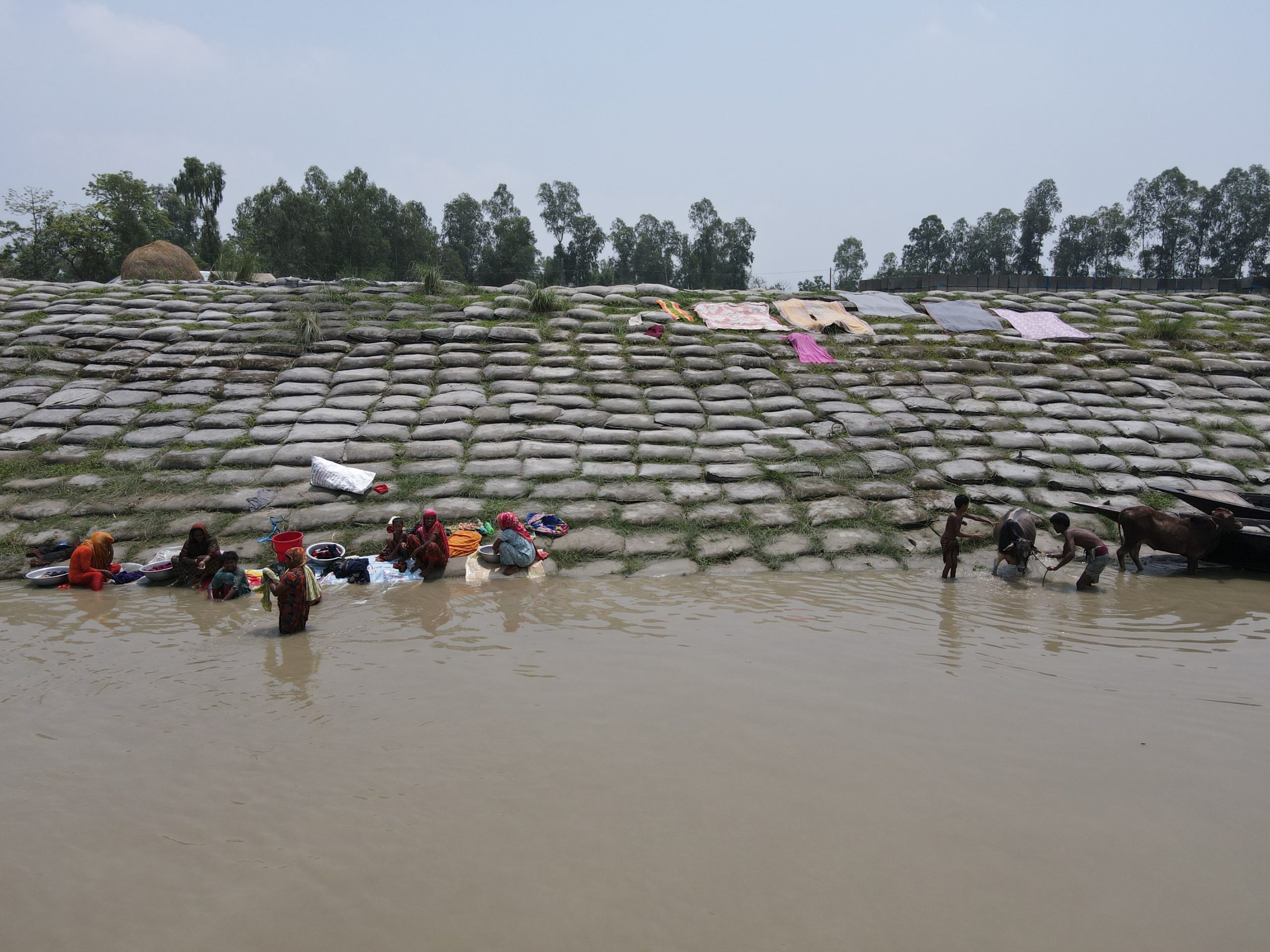 People living on the Brahmaputra chars know that large parts of the low-lying sand-and-silt islands will be inundated every monsoon. It does not take a big flood. Some raise the earthen foundations of their homes as high as they can afford to. Then they hang their bedsteads from rafters, hammock style. Planks are hammered together to make lofts at the same higher level. This is where they live when the floor is flooded. 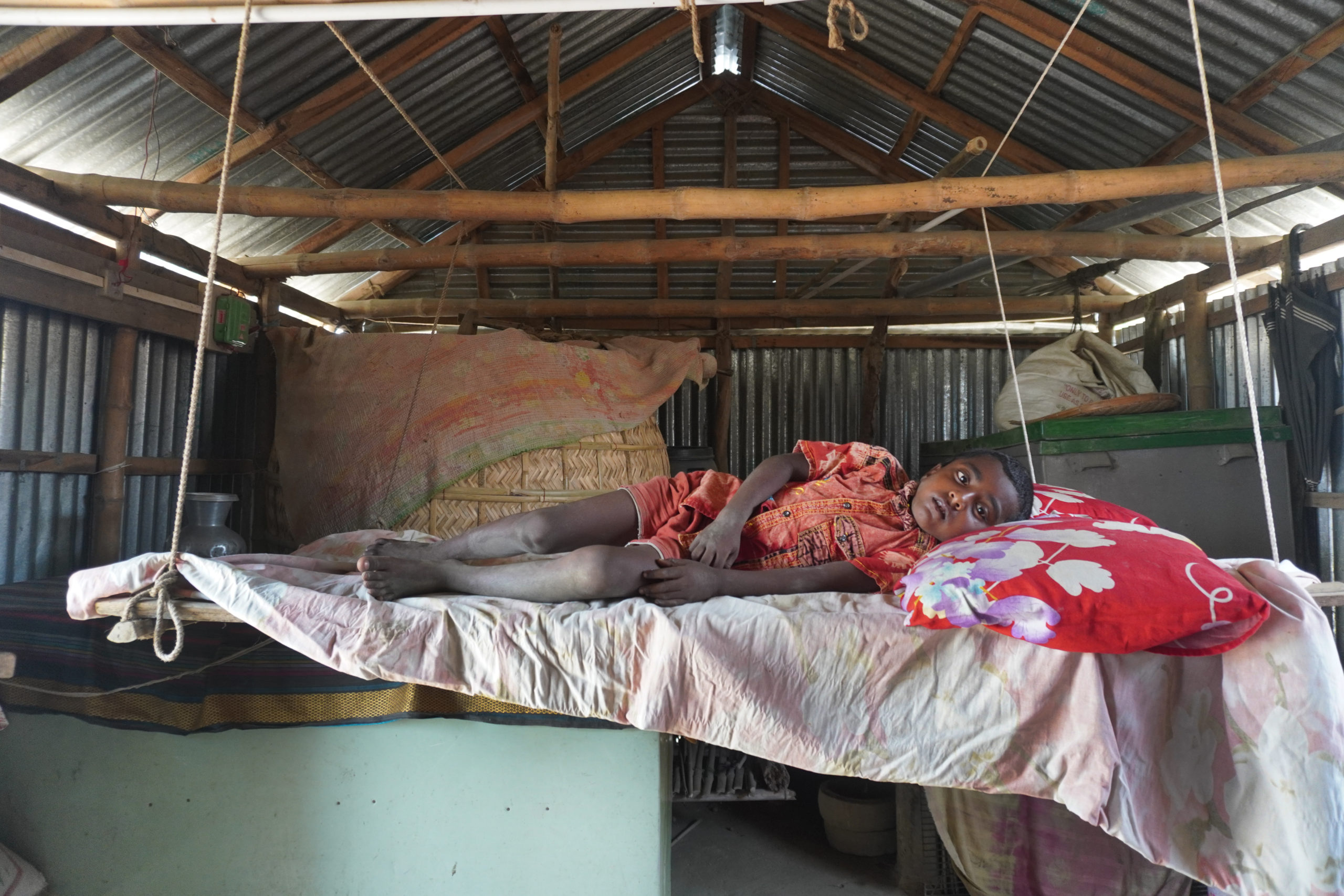 Hanging a bed like a hammock to keep it above the floodwaters is a widespread practice – Char Shubhagacha, Jamalpur (Image: Mohammad Abdus Salam / The Third Pole)

But the water may rise further. So, in just about every home, trunks of banana plants are lashed together to form rafts on which families will live, sometimes for months. The wealthiest shelter in their own boats. Huts, roads, markets – all are under water. 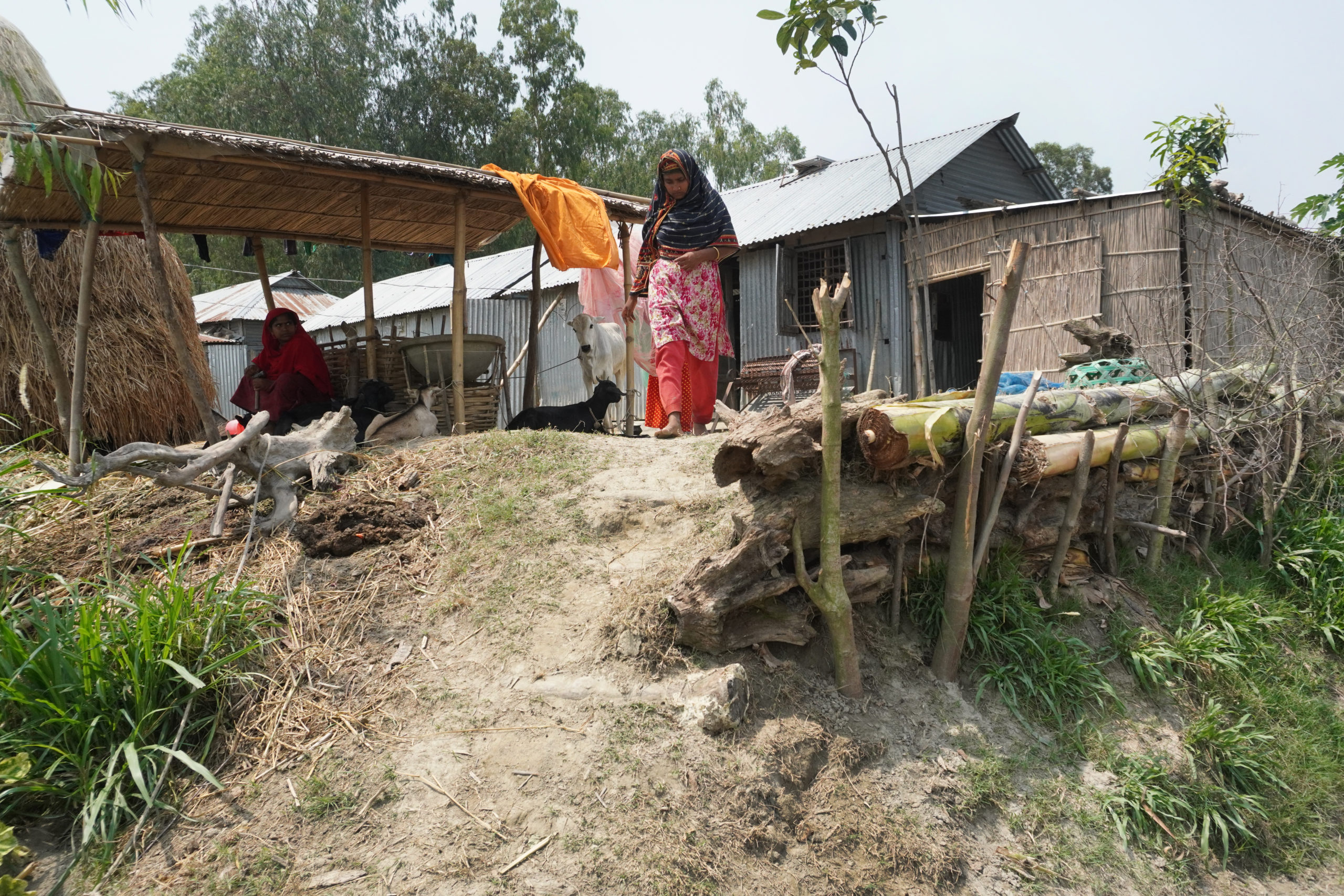 Before building their homes, char residents raise the earthen foundations as high as they can afford to in an effort to keep their homes safe during floods – Char Shubhagacha, Jamalpur (Image: Mohammad Abdus Salam / The Third Pole)

“When floods inundate our homesteads, we must live in lofts built inside houses or on boats or the rafts. When the situation gets worse, people move to [government-run] shelters. But they do not want to go there leaving their all belongings behind,” said Ziaur.

There is one item found in every char household, however poor: a waterproof box. Land title deeds and all legal papers are carefully folded inside polythene packets, which are kept inside the box. 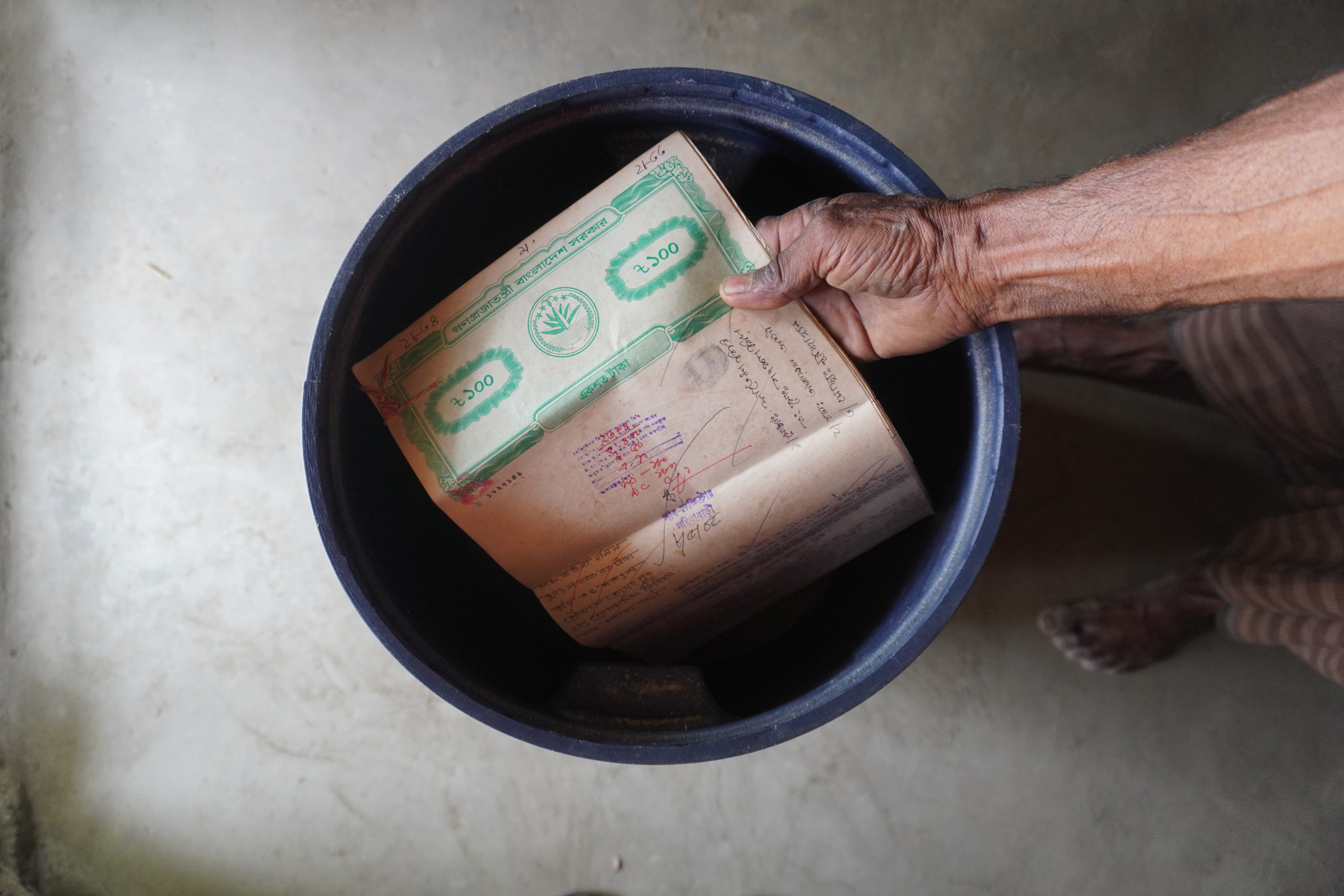 There is one watertight box in every home to keep legal and other important documents safe from floodwaters – Char Damodarpur, Jamalpur (Image: Mohammad Abdus Salam / The Third Pole)

The big adaptation is in agriculture. Mozam Mondal of nearby Char Shovagacha said farmers are now cultivating flood-tolerant varieties of maize. “I cultivated maize on one acre this year and there was bumper production.”

“We like to sow maize on chars as we get a fair price for the cash crop. It’s higher than for other crops. I sold maize at BDT 1,300 [USD 15] per maund [37.32 kg] this year,” said Mozammel Haque, a farmer on Char Dawlatpur in Sharishabari sub-district. 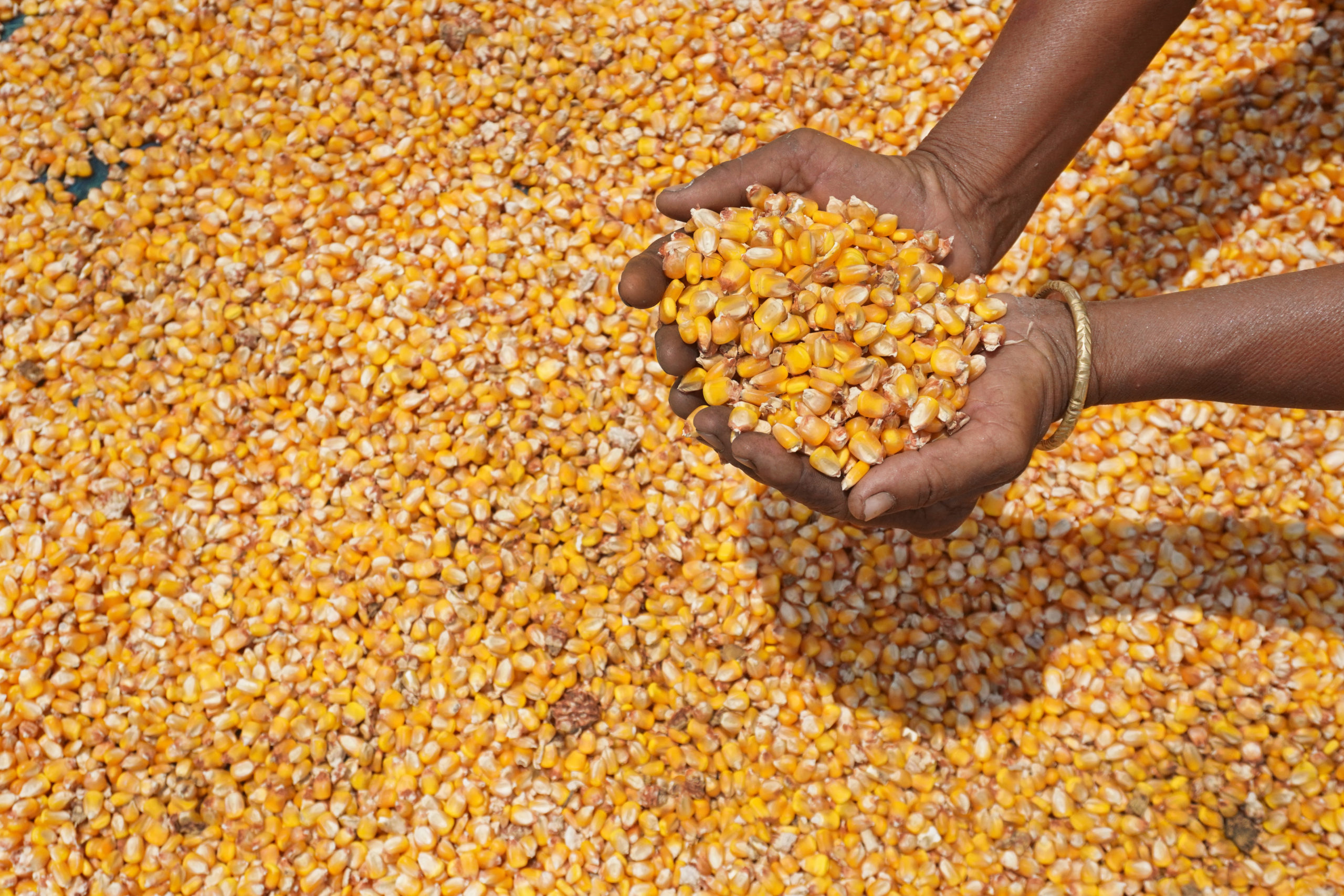 What happens to their livestock? Mozam said residents must keep livestock on the same rafts. People carry dried rice in various forms as food. There is nothing for the livestock until they manage to steer their rafts to the nearest patch of grass.

Eamily Begum, 50, knew her family could not afford to raise the foundations of their char home. But she got support to do so in 2021 from the Palli Karma Sahayak Foundation, a government-run development organisation. She thinks the family will be relatively safe now.

“In the past, we had to sell our goats at lower prices before the monsoon as we had no way to keep our goats during floods,” Eamily said. But now the raised plinth of her family homestead has enough space to house the goats they rear. “Now we will not sell our goats [cheap] during a flood.” 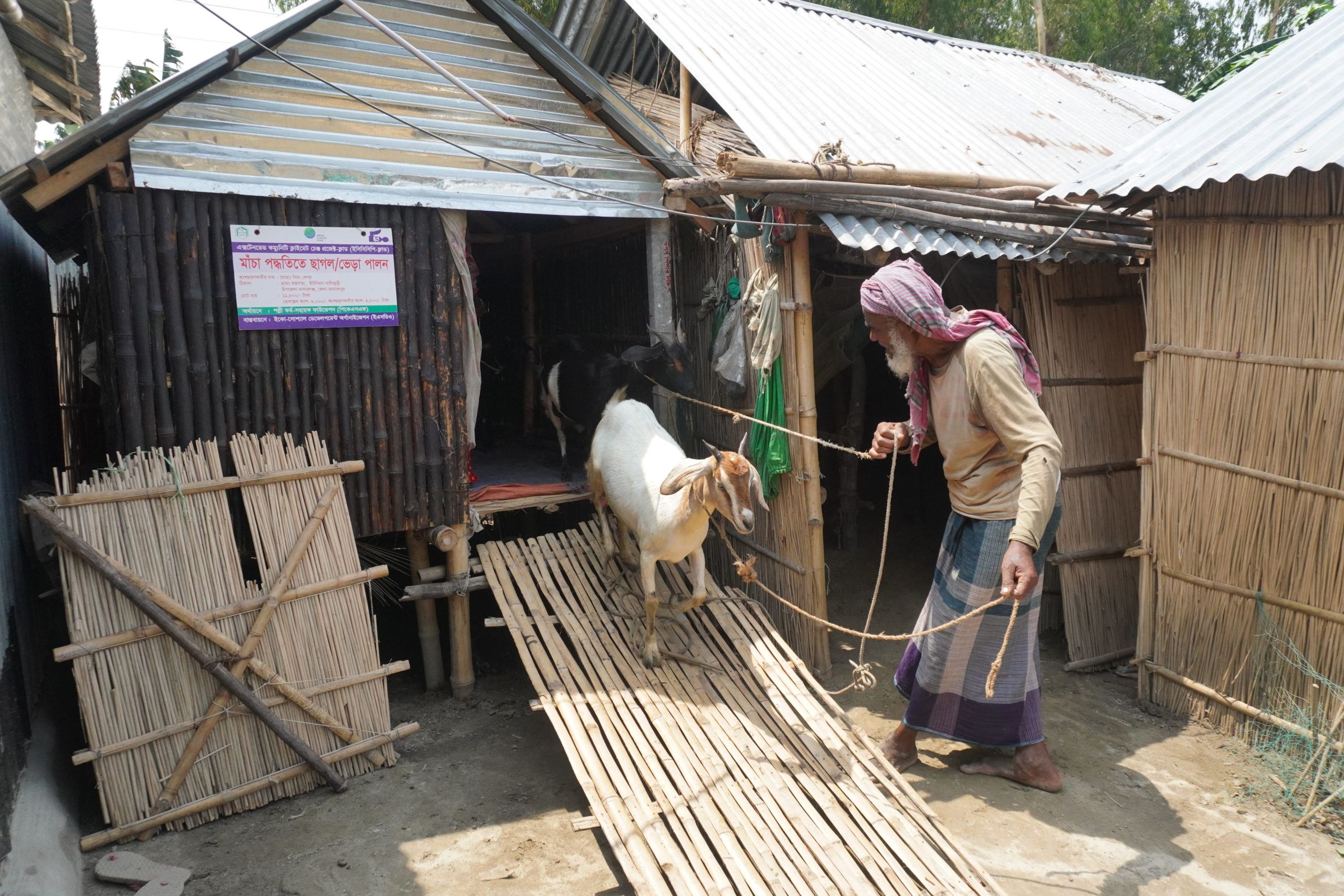 Some raised plinths are large enough to grow fruits and vegetables around the homestead. “I have already earned about BDT 1,400 [USD 16] by selling bottle gourd,” said Seema Begum, another resident. “I will be able to earn more by selling papaya. The fruit has started ripening.”

Pogidur Rahman, coordinator of the PKSP Extended Community Climate Project – Flood, said the project has provided financial support to 87 families to build climate-resilient houses by raising plinths. But, Rahman said, this support is not enough as there are a huge number of poor families living on the chars.

Floods submerge the tubewells from which char dwellers get their drinking water. Every monsoon, they face a water shortage. But sanitation has improved on many chars – government-built public toilets have been raised higher so they are not submerged as quickly as before.

“In the past, our tubewells and toilets were inundated during the floods. Now we have installed them on raised plinths. We hope we will not face any drinking water and sanitation crisis during floods in future,” said Afroza Begum of Nadaghari Char at Madarganj. 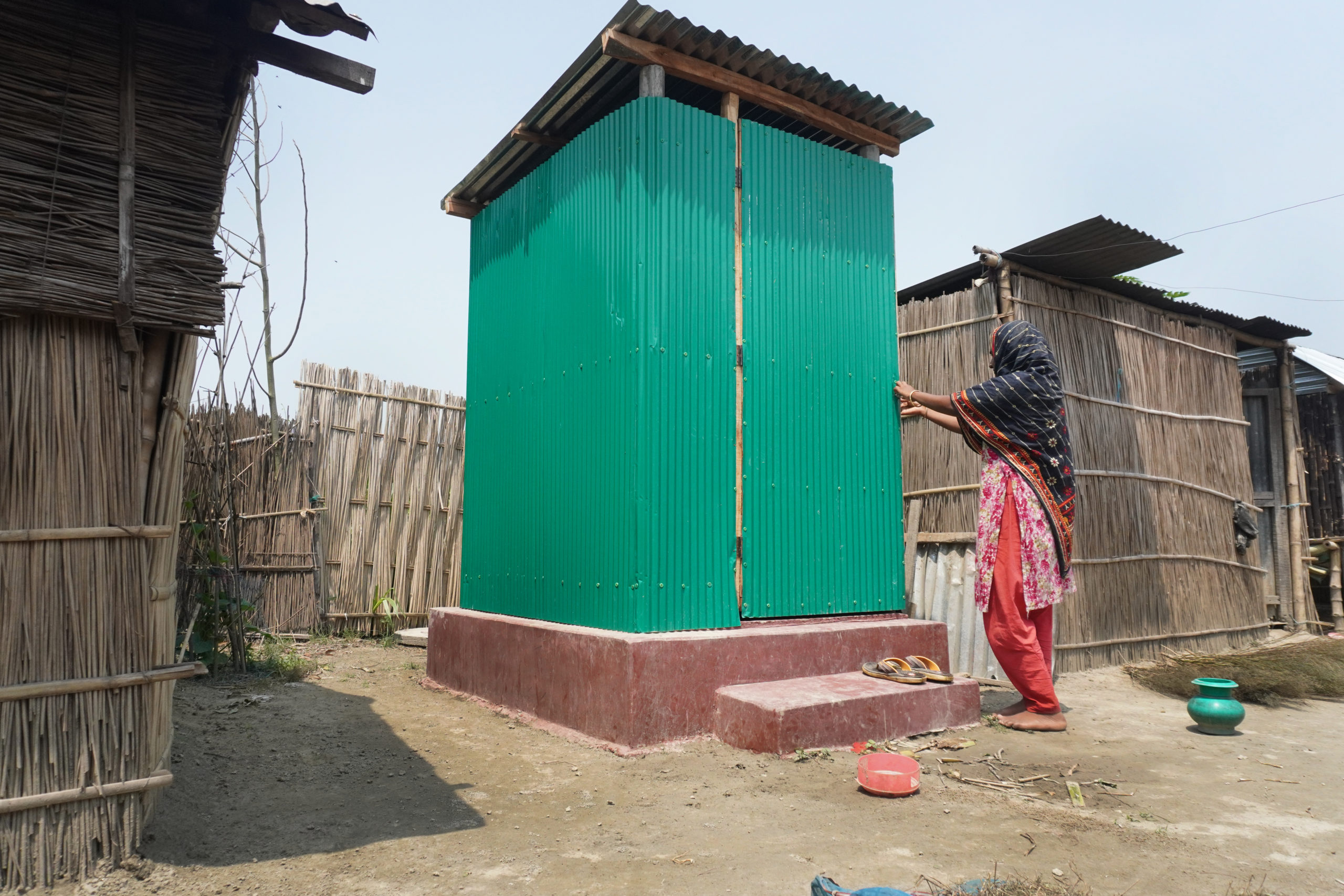 A public toilet built on a raised platform in Char Shubhagacha, Jamalpur, to keep it above floodwaters (Image: Mohammad Abdus Salam / The Third Pole)

A flood does not change the traditional roles of women – cooking and fetching drinking water. It makes their jobs harder. Some have to travel up to a kilometre to get to a functioning tubewell. Some reach it on boats or rafts. Others must wade through, sometimes barely keeping their heads above the floodwaters.

“Collecting drinking water is a hard task indeed,” said Mahmuda Begum, resident of Char Damudurpur in Jamalpur district. “We have to go a long distance by boat or raft.”

And when women are forced to stay in shelters or atop embankments, they are vulnerable to sexual harassment, especially when they use public toilets at night, said Muhammed Forruq Rahman, research and advocacy manager of the local NGO Network on Climate Change, Bangladesh.

There are not enough education facilities for children in char areas. The few schools that exist are flooded every year, meaning children miss classes for months. 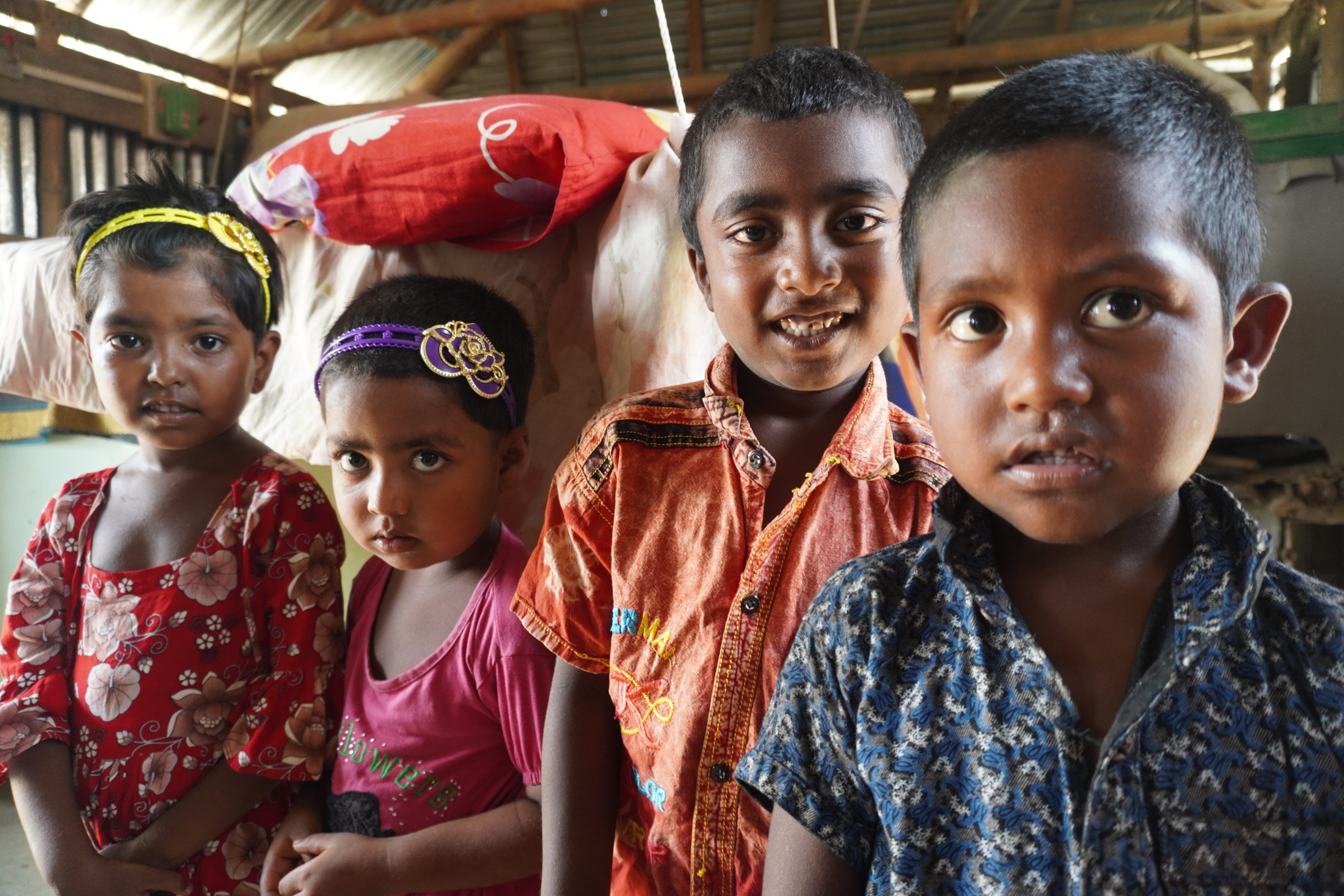 Few of the children living on chars go to school, which remain flooded and closed for months every year – Char Shubhagacha, Jamalpur (Image: Mohammad Abdus Salam / The Third Pole)

Why do people live on chars?

The chars formed as the Brahmaputra, Ganga and other rivers brought silt down from the Himalayas. The river islands are so fertile that they have been fought over for centuries. Local landlords used to keep private armies (called paiks and lathials) to take over chars, and incentivised landless farmers to cultivate the char lands and live there despite the difficulties. Many of the farming families living on chars today are descendants.

They grow rice, maize, jute and vegetables – all of which grow better here than on other soils. “There is no shortage of crops in the chars any time of the year,” said Mahmuda Begum.

Shortage of health and other services

Alal Mondal, a resident of Char Shovagacha, said that if anyone falls ill, there is no doctor on the island. “So, the patient must be taken to Gabergram, three kilometres away, by boat or raft. Then they may have to be shifted to a hospital in Jamalpur.” His neighbour Abdur Rahman said there is no community clinic on the char.

Char residents have little access to government-run schemes such as the vulnerable group feeding scheme, vulnerable group development programme, old-age allowance, widow allowance or disability allowance. There are allegations that officials seek bribes before agreeing to include anyone in a scheme. 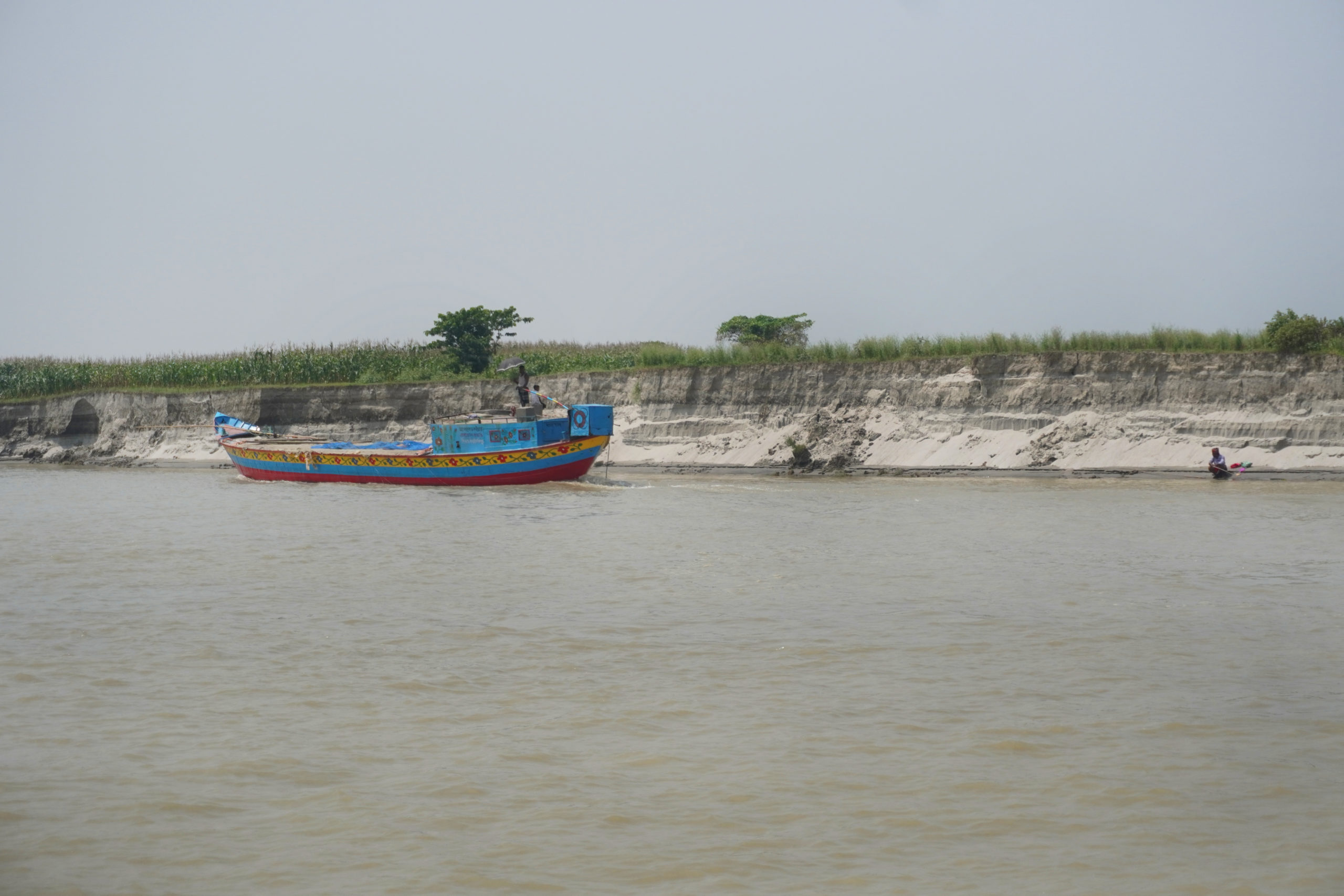 Hope and pumpkins along the Teesta