Ahmed Howladar lives with his family on Char Janajat, an island in the Padma river in Bangladesh’s Madaripur district. Floods, erosion and displacement have been an intimate part of Howladar’s life and those of the millions of people who live on riverine islands across the country, known as chars in Bengali. Since childhood, the 60-year-old has shifted from one char to another.

This is the last story in a three-part series on flooding in the Kosi-Ganga-Padma river basin across Nepal, India and Bangladesh.

“Every time a flood comes, it destroys our house, crops and takes the lives of many. Everything is washed away by the mighty river Padma, leaving us without shelter, food or livelihood. But life goes on. People move to a new char for livelihood and shelter,” said Howladar.

This year floods submerged the char and washed away Howladar’s house and cattle, but he and his family escaped with their lives. Howladar and thousands of others from Char Janajat have taken shelter near the highway under the open sky, amid the fear of Covid–19.

They return to fish in the river, hoping the waters will recede and they can return home to what is one of the oldest of hundreds of thousands of chars – or sandbars – in the Padma basin. But over a month on, they are still waiting.

A third of Bangladesh was flooded this July after some of the heaviest rains in a decade, with 2.8 million people affected, according to media reports.

Rising water levels in most of the rivers in the Ganga basin, caused by heavy downpours and a rush of water from upriver India, have worsened the flood situation in August. Over a million people are still marooned without drinking water or proper sanitation, said district officials.

The government has distributed relief supplies in the worst affected areas across the country, including 674.15 tonnes of rice, BDT 11.44 lakh [USD 12,500] in cash, baby food, dry foods and cattle-feed.

The Padma (the eastern distributary of the Ganga) is the central part of a deltaic river system with hundreds of rivers and streams – some 2,100 kilometres in length – flowing into the Padma.

People living on the chars are some of the poorest and most vulnerable. A 2010 study estimated that they are home to over 12 million people. Many chars get inundated every monsoon. The people living there build makeshift huts that they can rebuild easily once the char re-emerges. But this means they are unable to provide any permanent address to the authorities, and thus get left out of relief and welfare schemes.

With more chars in the Padma than in other basins, the problem is more acute in this region.

Apart from fishing and a bit of farming, people living on the chars of the Padma rely on cattle rearing. Every family has domestic animals like cows, goats and chickens. Since the import of cows from India was stopped by the Indian government last year, char people have taken to cattle rearing as a profitable business. But the floods swept away many cattle this year. Some families saved their animals in the hope of selling them during Eid. However, because of the Covid-19 lockdown, cattle markets were shut, and the impoverished char dwellers did not get a fair price.

Having lost everything in the floods, people from Char Janajat of Madaripur district are surviving on fishing. “We can manage to buy some food for our families because the river is giving us fish,” said local resident Siraj Madbar. 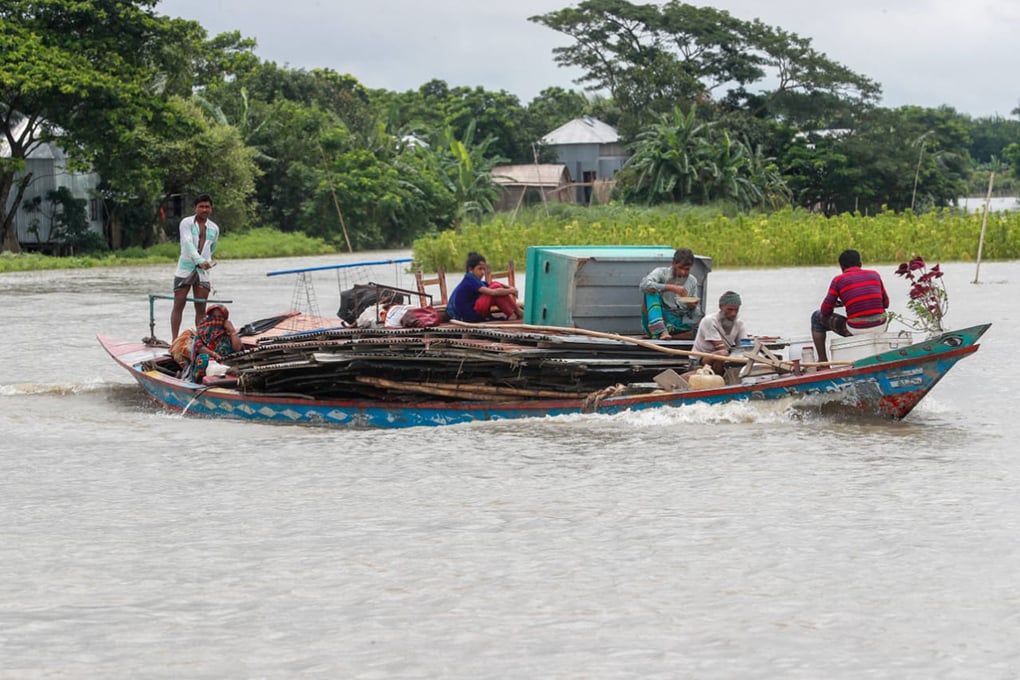 Flooded out of their char homes on the Padma river, some residents have no option but to live on rickety boats for months

At least 30,000 people are still in lockdown in several chars in Madaripur, Shariatpur and Faridpur districts. There is an acute lack of food and clean water in these marooned islands. Apart from the threat of Covid-19, there are growing fears of an outbreak of water-borne diseases.

A resident of Char Janajat said, “We had some health facilities but due to floods and Covid-19, the local satellite clinics are closed. There is no doctor.” When asked about the precautions they were taking against Covid-19, Saidul Bepari from Barkandi area of Jajira in Shariatpur district said, “We are struggling to get food to survive; buying medicines for any illness is a luxury for us. We have no choice; if the infection spreads, we will have nothing to do but accept the consequences. We know we may die. But what can we do?”

Most chars in Madaripur district were flooded by late July, and a visit by this correspondent at the time showed submerged islands, houses washed away and crops destroyed. There was no sign of life, trees or vegetation. Most families had left the chars in search of shelter or were living temporarily on boats. Most riverside villages were also inundated.

A little further downstream, closer to the confluence of the Padma and the Meghna rivers, around 50 villages in Shariatpur district were partially inundated by the Padma. Erosion has eaten away riverbanks and farmland in Barakandi, Durgarhat and Naodoba areas of Jajira.

Upstream of Madaripur, the situation was similar in Faridpur district, where 184,833 people have been hit and 4,017 hectares of crops damaged. 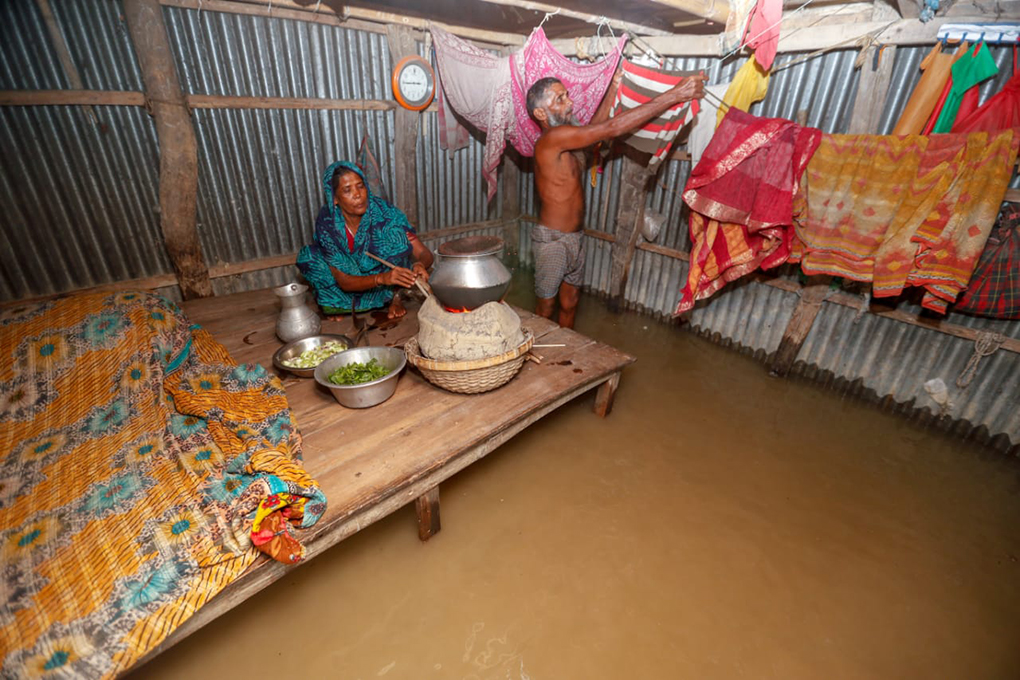 One of the many homes flooded by the Padma

A flood during the Covid-19 pandemic is a crisis on top of a crisis. While Bangladesh has always been flood-prone, the monsoon rainfall was above average this year.

But human interventions have exacerbated the flood damage. Forests have been cut down to make way for hundreds of brick kilns in the riverine areas, and there has been widespread dredging for the illegal sand-mining business. Owners of brick kilns take away all the topsoil – which is said to be ideal for brick making – destroying the riverbanks.

The government has also not found any practical solution to protect the riverbanks from erosion. Most of the time authorities respond when the crisis begins, rather than taking preventative measures. The visible ad-hoc solution to control erosion is to dump bags filled with sand and rocks – called geobags – in the river. Locals said this partial and temporary solution is not the best way to stop river erosion.

Mujibur Rahman Hawaladar, chairman of the National River Conservation Commission, said, “The main cause of river erosion is dredging and other forms of mismanagement.”

Dredging around the Padma Bridge is also exacerbating erosion, said Hawaladar. “Dredged sand and soil are not being disposed of properly, creating chars that are obstructing the movement of water. As the bridge is in the middle of the waterway, it also acts as a catalyst for erosion.”

A building that collapsed in the 2020 floods

Can Pakistan go beyond chemical pesticides for locust control?

The destructive ‘greening’ of the Thar desert in India