Qasim Shah, a farmer in Pakistan’s northern mountain province of Gilgit-Baltistan, has no regrets about giving up crop farming.

“Trout farming is more lucrative than traditional crops. Crops and fruit have become too climate-sensitive and come with the risk of losing investment,” said Shah, who is also the vice president of the Private Fish Farms Association in Ghizer district.

Trout farms are cropping up in Gilgit-Baltistan, where rapidly warming glaciers form cold water reservoirs – a key breeding ground for trout. Nearly 200 fish farms have been set up across the province in less than 10 years, with new farms appearing every month. Fish farms are also burgeoning in the neighbouring province of Khyber Pakhtunkhwa, where the government hopes to create jobs. At each of these farms, up to 20,000 trout are bred to be sold as food.

The number of fish farms in Gilgit-Baltistan today, up from 16 in 2012, according to the fisheries department’s deputy director Ikramullah.

The department is targeting 500 farms in the next five years.

As climate change threatens food security, traditional crop farmers in Gilgit-Baltistan are opting for trout, which they say is a more sustainable source of income. Across South Asia, farmers are adapting to dwindling outputs and uncertain incomes – with some, like Shah, looking beyond crop cultivation.

“I earned 500,000 Pakistani rupees [USD 3,285] in profit at the end of the last season despite the coronavirus pandemic. This season, my target is much higher,” he added. Shah started fish farming in 2018 with an investment of over Rs 1 million. He set up a small hotel near the farm to serve fried trout to tourists and locals. If the government provides transport and packaging facilities, he said, he expects to export the fish to China.

“My village land is highly fertile for crops and fruit but erratic rains and other climatic implications like frequent pest attacks have spoiled the produce over the years,” said Shah.

There are three species of trout in Pakistan: snow trout, rainbow trout and brown trout. They now rarely seen in the wild outside hatcheries. According to the UN Food and Agriculture Organization, the snow trout is indigenous to the region and the other two species were introduced by the British in the Chitral and Kaghan valleys in the 1920s.

A study in 2007 said there are 45 lakes in Pakistan’s northern areas, of which 12 were stocked with trout as of 2007 – mostly snow trout. Two species of exotic trout – the brown and  rainbow  trout – had established  themselves  in  the  area. The brown  trout  is not recommended for commercial farming  owing to its slow  growth  compared  to  the rainbow. The rainbow  trout  can  tolerate  high  water  temperature, is less carnivorous and grows faster.

Until the 1990s, trout fishing was a major source of livelihood for local communities. However, pollution and construction along rivers has led to a sharp decline in trout. According to the Gilgit-Baltistan fisheries department, the total annual production of fish is 465 tonnes.

The support includes training and awareness sessions on acquiring land for fish farming, facilitating farmers in getting bank loans for private hatcheries and providing fish feed.

Untreated effluent from some hatcheries drains directly into the Indus river and streams which are a source of fresh drinking water for communities.

Ali Asghar, an officer in the province’s fisheries department, confirmed that “water from some farms mostly drains to the rivers”.

“If farmers are careless, it may pollute drinking water,” Asghar said, though he was dismissive of high levels of pollution in the river. No study or environmental impact assessment has been conducted since fish farms began to increase in the province. In 2014, a study conducted on water sources by the province’s Environmental Protection Agency said only 22% comply with World Health Organization standards.

Another official said the department received complaints from areas where locals were directly using water from farms for drinking. Requesting anonymity, he said fresh water sources in this area are contaminated “not only due to these farms, but from waste coming from hotels especially built near the farms”.

Karim Johar, a research officer in the fisheries department, said: “Our focus is on creating awareness on how to breed trout and how to protect the environment.” He told The Third Pole: “We even shut a few farms – including a government hatchery – from where we received complaints of polluting water.” In the past year, the department registered 96 offences related to fish farms, and levied total fines of Rs 100,000 (USD 649).

“Fish feed or waste from these farms is not significant enough to affect the environment at a large scale or dangerously contaminate the rivers,” Johar said. He added: “The waves and flow of these rivers is so powerful that it naturally filters any small level [of] contamination.”

But as fish farms grow in Pakistan, concerns about pollution and sustainable practices mount. 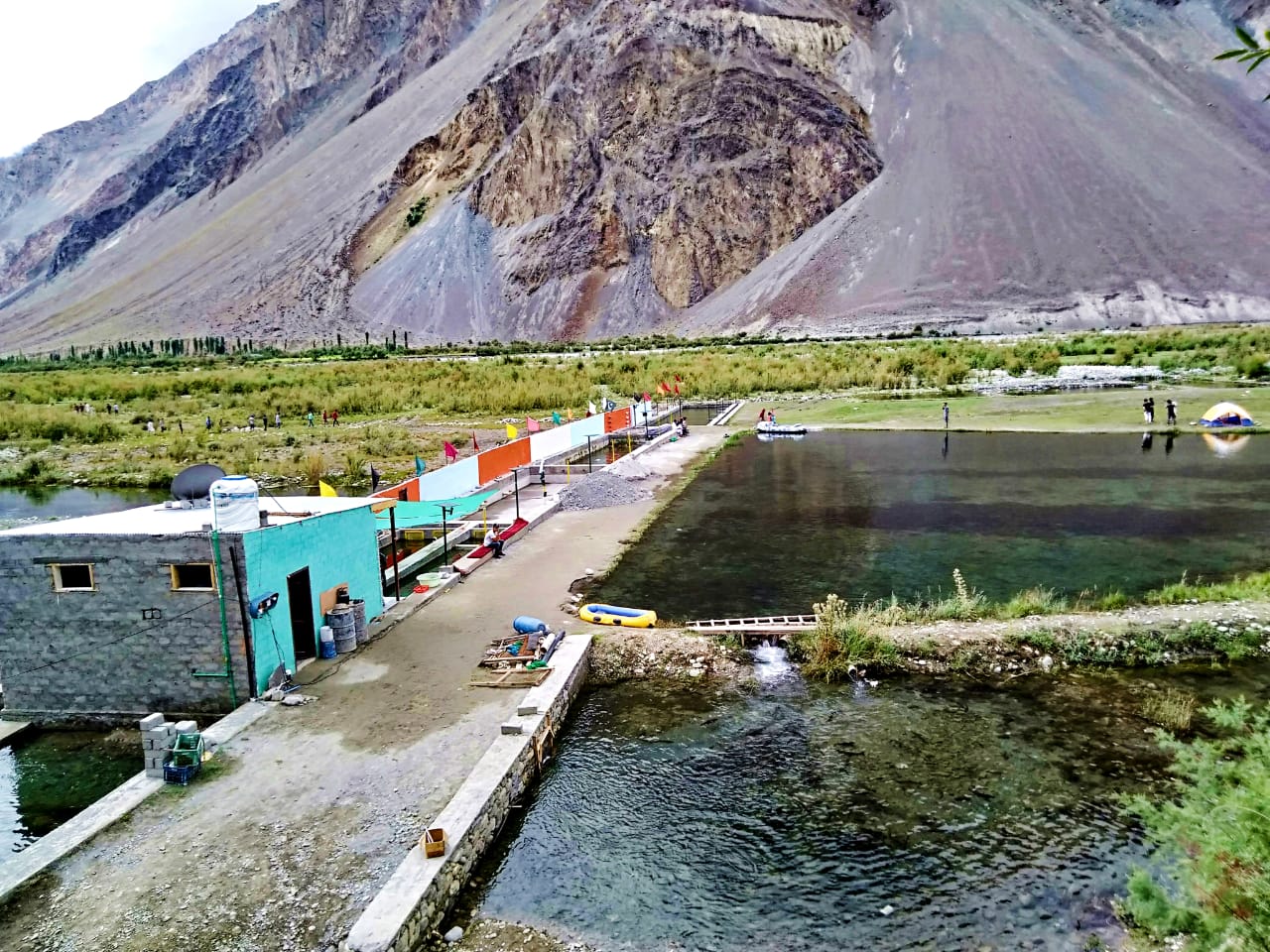 A fish farm in Birgal village, where waste from about 30 fish farms flows into the Ghizer river (Image: P M Baigel)

Barkat Ali, who lives in Birgal village, Ghizer district, said waste from about 30 big and small fish farms established in one village drains waste directly into the Ghizer river – a tributary of the Indus.

“This drainage could contaminate drinking water if proper measures are not taken,” he said.

Farmer Qasim Shah, however, rebuffed such allegations. “We are responsible and very sensitive to the environment. We take every measure to avoid pollution,” he said. He said farmers do not use chemicals in fish feed and are “very strict about littering”. 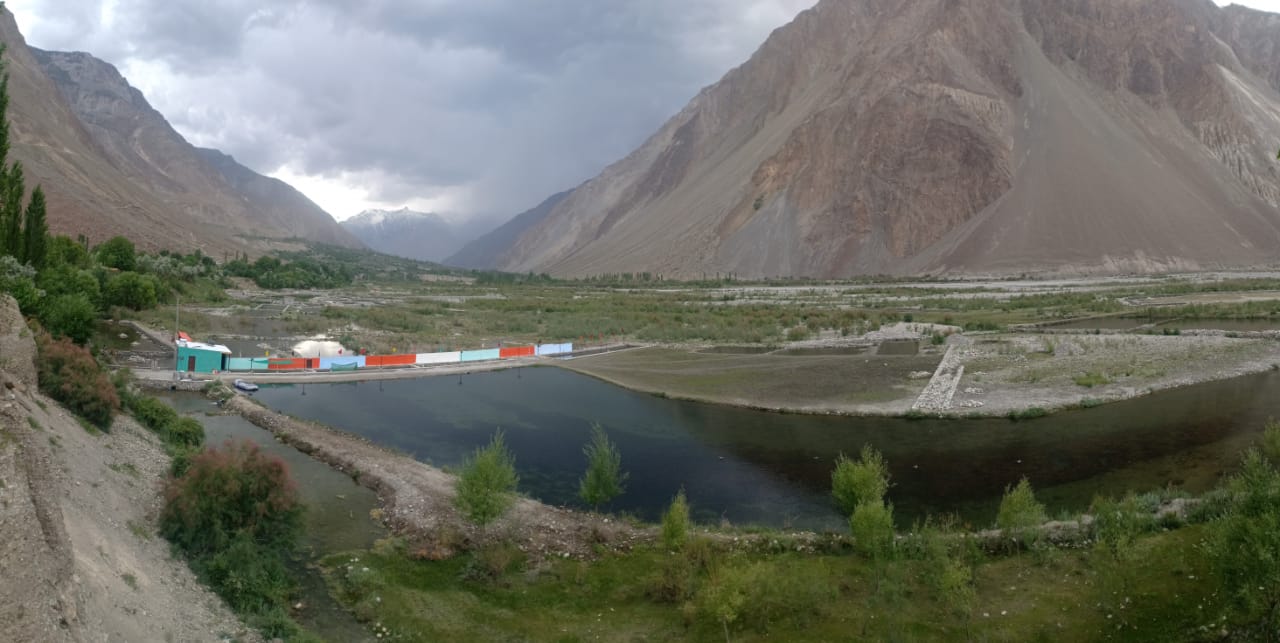 In recent years, large-scale fish farming has come under fire for threatening wild fish populations. Big commercial fish farms require tonnes of wild fish to be caught from the oceans and made into fish food.

Farid Ahmad Jan, a fisheries and aquaculture specialist at Karakoram International University, told The Third Pole that at the moment farmers in Gilgit-Baltistan use discarded fish from wholesale markets. He said: “It doesn’t make financial sense to invest in catching live fish for fish feed as it will drive up the price of the trout.”

According to a report by NGO the Global Aquaculture Alliance, common environmental concerns linked to fish farms include nutrient and effluent build-up and disease spreading to local fisheries. “Nutrient build-up happens when there is a high density of fish in one area. Fish produce waste, and their waste has the potential to build up in the surrounding area. This can deplete the water of oxygen, creating algal blooms and dead zones,” the report said.

It highlighted the effects of antibiotic use on the ecosystem around enclosures, including on wild fish. It also raised concerns about the escape of non-native fish, which may compete with wild fish for food, potentially displacing native species.

Farmers jump at the opportunity to farm trout as it is a lucrative business. But they need to listen to experts if they want to farm sustainably

Jan said there is a dire need to educate private farm owners. He talked about a recent incident in Ghizer, where “3 tonnes of trout died at a private farm because the bottom of the enclosure was not cleaned properly”.

“These farms are built very close together and all the water channels are connected. If a disease erupts in one, it quickly spreads to the nearby farms,” said Jan.

“Right now, there is a major focus on promoting trout farms and farmers jump at the opportunity as it is a lucrative business. But they need to listen to experts if they want to farm trout sustainably.”

Jan also said that trout farms in Pakistan could help protect trout populations if local demand can be met by farmed rather than wild fish. “Trout populations in the province will be wiped out in 10 years if something is not done to protect them now,” he said. “At the moment, the trout farms are catering to the elite as their catch is expensive. As a result, locals go directly to rivers and streams to catch trout and deplete the stock.”

Raza Haider, regional head for conservation at the WWF, said trout farm owners in Pakistan must keep in mind the environmental adversities in their activities. “We need both a sound environment as well as nutrition,” he said.

Pakistan trout farms at risk of financial ruin after pandemic