Jeyalakshmi Palaniappan, 55, planted one-and-a-half acres of oil palm in a village in the southern Indian state of Tamil Nadu. But she found cultivating them financially unviable and, nine years later, she uprooted them. Now, she grows coconut trees on another piece of land in the same village, and these are bringing her better returns.

Uthirapathy Muthusamy, 79, a retired professor in another part of the state, used to grow coconut as well as oil palms. While he was satisfied with the income from oil palm, he lost most of both crops to Cyclone Gaja in 2018, and decided to replant only coconut because it needed less maintenance and was more profitable.

Like these two growers, increasing numbers of oil palm farmers have switched to growing coconut and other crops. While the Indian government is pushing for an increase in local palm oil production, domestic consumption of coconut and other traditional oils, such as mustard, is increasing. At the same time, there seems to be a growing awareness of the environmental costs and health concerns associated with palm oil.

Many farmers prefer coconut cultivation, as the trees need much less water and can grow in a broader range of climatic and soil conditions. Given these advantages, will coconut oil come to partially replace palm oil?

Each region of India has traditionally consumed locally produced oils. People in the southern Indian state of Kerala and some parts of Tamil Nadu have preferred coconut oil, and some sesame and groundnut oils. This consumption pattern changed when cheaper palm oil became available in the 1990s. At the same time as this high-calorie oil became increasingly available, affordable and accessible, India’s appetite for energy-dense food grew.

The increase in demand necessitated the import of edible oils, palm oil in particular. In 2019-20, palm oil accounted for nearly half of the USD 10 billion that India spent on importing edible oils.

To reduce reliance on imports, the Indian government has been aggressively promoting domestic oil palm cultivation since the 1990s. In Tamil Nadu, for example, promotion started in 1993. With financial support from the provincial and federal governments, oil palm farmers received a full subsidy covering seedlings, drip irrigation system and fertilisers, as well as a four-year allowance for lost income as the palms matured.

With the push and financial assistance, numerous farmers turned to oil palm. However, the practical difficulties left many disgruntled. 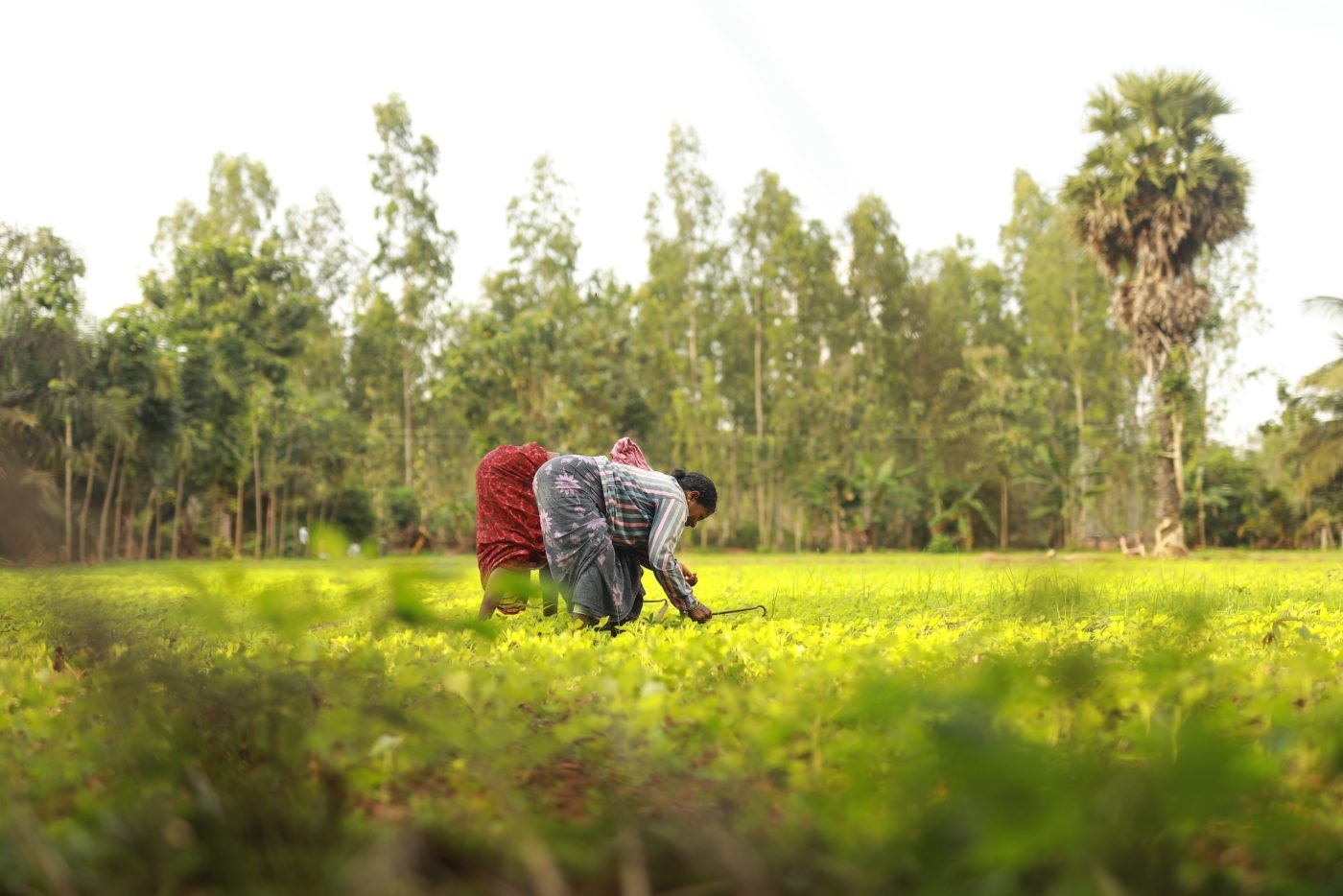 Many farmers in India shifted to oil palm after receiving financial assistance, but as profits dwindled, they returned to cultivating their former crops (Image: Santhakumar Chakravarthy / China Dialogue)

According to a farmer, who does not want to be named, the agriculture department in his region did not educate them properly on the requirements. “We thought it would be just like palmyrah [another species of palm], which does not need any care at all. We didn’t know oil palm would need so much water, inputs and maintenance,” he said.

As described by the National Mission on Oilseeds and Oil Palm (NMOOP), oil palm requires evenly distributed annual rainfall of 2,500 to 4,000mm. As Madhu Ramnath, an anthropologist and forest rights researcher and writer, points out, none of the 16 states where oil palm is cultivated receive suitable rainfall, forcing cultivators to go deeper to extract groundwater.

When oil palm cultivation was promoted in Tamil Nadu, the four companies that were entrusted with processing the fresh fruit bunches (FFB) into oil quit one after the other, leaving farmers in the lurch. With the companies not picking up the FFB on schedule and alleged inaction by the government, the farmers grew increasingly disgruntled. After seeing the early planters suffer, many late entrants across Tamil Nadu uprooted their oil palms, even those that were performing well.

Later, Godrej Agrovet Limited was assigned the work, and now caters to the entire state of Tamil Nadu with its mill in Ariyalur district.

Farmer Kathalingam D. says the income is nowhere near what they were made to believe. Besides, they were not made aware that the government would fix the price of FFB every month, with the international crude palm oil price having a bearing.

Balakrishnan K., whose family has been growing oil palm for 12 years, swears by it. “Maintenance of larger plantations is cost effective; with proper irrigation and care, minimum net income could be INR 60,000 [USD 804] per acre.” Many farmers disagree.

Kathalingam, who grows coconut and oil palm, said: “Compared to coconut, oil palm needs more maintenance.” And, according to Viswanathan A., a farmer who pulled up oil palms across four acres, because of the maintenance required, the subsidies were insufficient. Kolanjiammal Angamuthu, 65, removed the oil palms within a year of planting as her husband has mobility issues and they could not care for the palms by themselves.

Ramnath draws attention to this gender aspect, explaining that climbing the thorny palms to prune and harvest is a job typically done by men, “marginalising women”. In a mixed farm, especially in the northeast where oil palm is being promoted, the entire household is involved in farming. The family gets food through the year. “With oil palm, the subsistence and self-sufficiency are disrupted; the work and payment are in the man’s hands,” he said. “Thus women are sidelined from decision-making.”

NMOOP specifies 150-200 litres of water is needed per day for each oil palm. The Coconut Development Board specifies 45 litres per coconut tree once in four days – or about 10 litres per day.

In 2018, a Ministry of Water Resources press release said India is the world’s largest user of groundwater, with around 25% of global extraction. Nearly 90% is for irrigation. According to Selvam S., president of a coconut producer company in Tamil Nadu: “With climate change causing erratic rainfall and frequent droughts, government should not promote water-intensive oil palm.”

Viswanathan, the farmer, says his land value would have doubled and earned him a handsome profit had he planted coconut instead of palm. 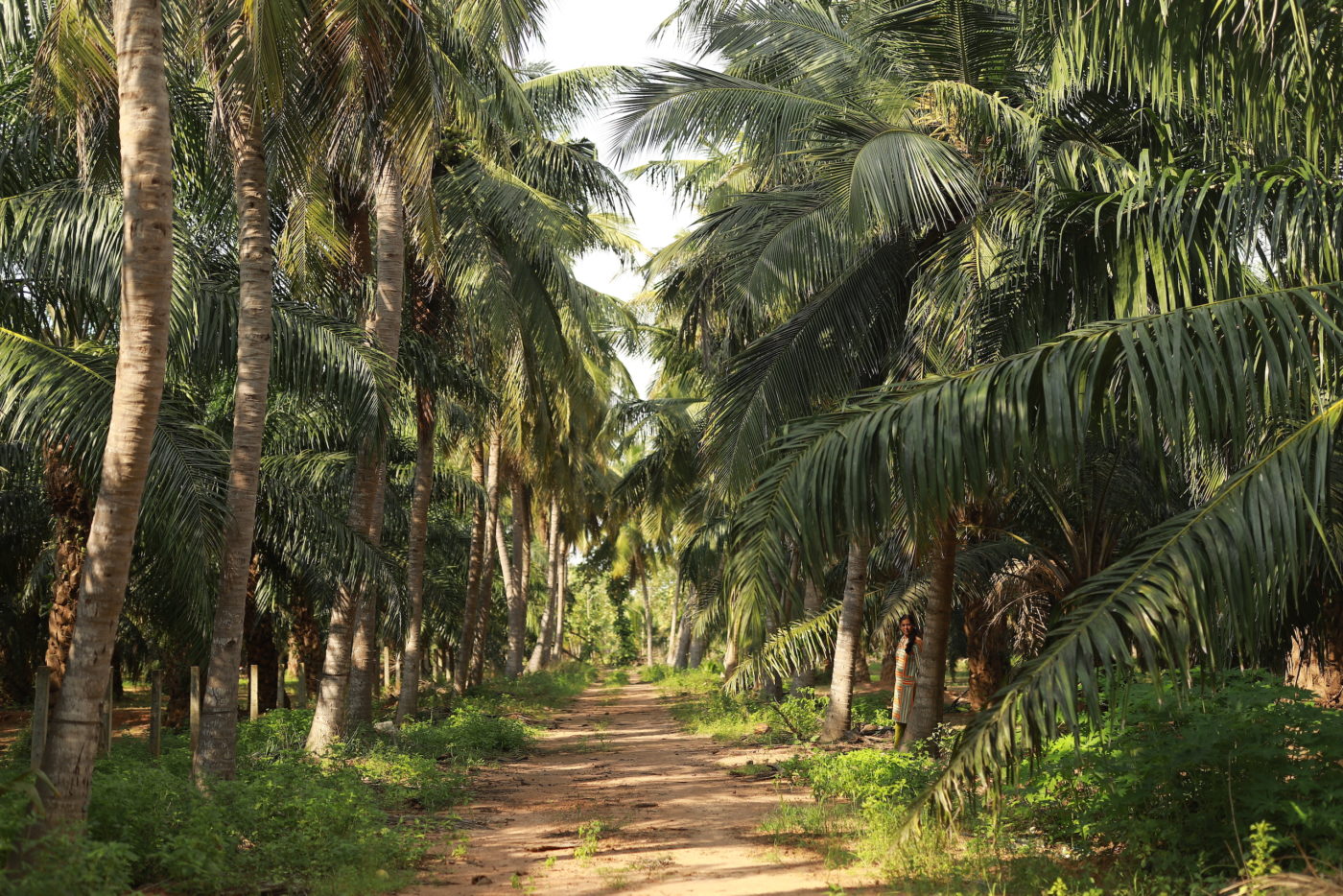 “Farmers have to sell the fruits only to the mill, unlike coconut which you can sell to any trader,” he said. “Many farmers employ local labour and press coconut oil in their own premises, like a cottage industry.”

Bhagawathy N.K., president of a coconut producer company, says the price for coconut is good right now but in general those who produce coconut oil see a dent in their income because of adulteration. Some traders mix coconut oil with cheaper palm oil – since it lacks colour and smell – and then sell it at a much lower price. “Pure coconut oil costs a minimum of INR 270 per litre (USD 3.6), but they sell adulterated oil for RINR 200,” he said.

A retired Coconut Development Board official says that in addition to selling coconuts, farmers should sell neera, a nutritious drink harvested from the flower head of coconut trees. “Tapping neera from a few trees will not affect coconut production, but would get an assured income for farmers against price fluctuations,” he said.

In the past decade, consumers have been switching to cold-pressed traditional oils, produced in local wooden presses. With increasing awareness, they have started showing preferences for locally grown food, especially after the pandemic.

According to Ramanjaneyulu G.V., executive director of the Centre for Sustainable Agriculture, a development organisation, “grow local, eat local” is not just about the local economy. “It’s also about local ecology, local resources and food habits,” he said. “Growing broccoli here and consuming it is not local. You need to look at ecological efficiency, local economy and healthy food.”

Officials of Kerala’s agriculture department agree that the state’s palm oil production has declined. Most of the palm oil produced in the state comes from Oil Palm India Ltd and Plantation Corporation of Kerala Ltd, both government entities. Growing coconut and rubber is easier and cheaper, and processing can be done locally, unlike palm, which becomes an industrial process.

Kerala has the largest area under coconut of any Indian state but trails in yield with 7,222 kg/ha. The average national yield is 7,828 kg/ha, and Tamil Nadu’s is 9,405 kg/ha.

According to Bhagawathy, the Coconut Development Board should be more proactive in improving productivity, getting good quality oil presses for farmers or creating awareness about coconut oil.

This article was first published on China Dialogue, The Third Pole’s sister site.