A father and son emptied their fishing nets. They had set up them up the previous night in the Mir-Wah canal near Seerani, a small rural settlement about 18 kilometres south of the city of Badin, in Sindh. Their catch was entirely made up of “trash fish”: very small fish. They would earn about PKR 300 (USD 1.80) for this. 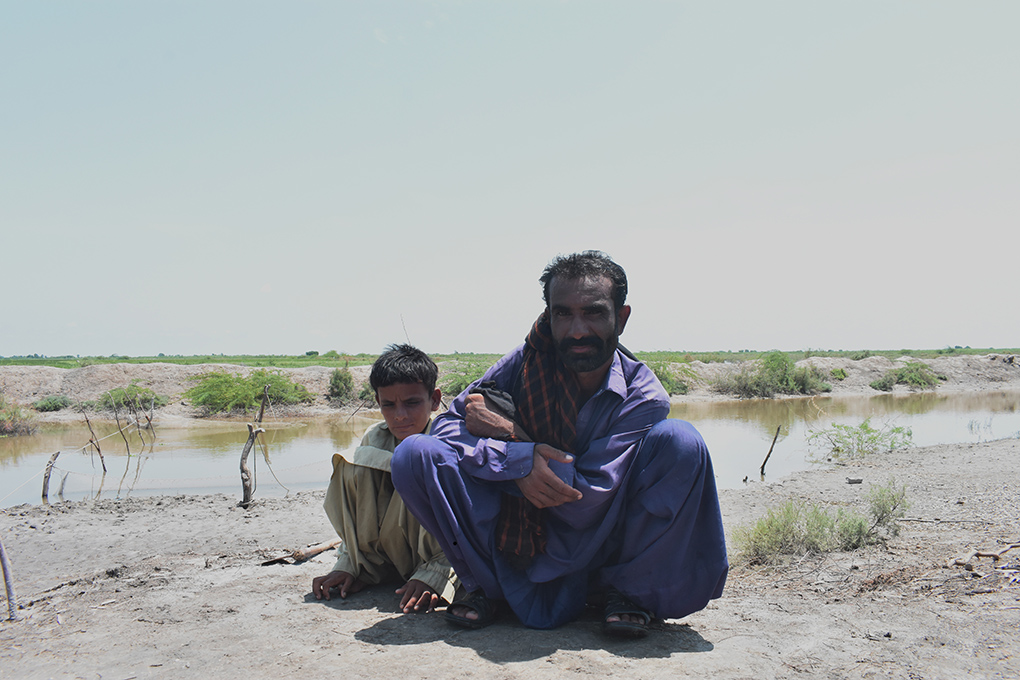 “We have hardly seen any big fish during the past 10-15 years in these inland water bodies, but we have to do this for the survival of our empty-stomached families. Who cares if it is prohibited or bad practice?” said the 36-year-old father.

Abubakar Shaikh is an environmental researcher who has carried out several studies for the International Union for Conservation of Nature. He said, “In June and July, the seeds [juvenile fish] of more than 17 species reach the freshwater bodies of Sindh’s coastal belt, but the majority of that is hunted by fishermen.”

Sindh’s coastline contains 71% of Pakistan’s fisheries resources – which includes the Arabian Sea, estuaries and inland lakes. Around 400,000 people in the province depend directly on the sector; the majority of them in the district of Badin. But natural disasters like cyclones and water shortages mean its people now live in one of the water-starved districts of Sindh.

In response, people have adopted destructive approaches like trash fishing, which is ruinous for fish populations as it prevents juvenile fish from reaching adult size and breeding. In 2010, Pakistan produced 257,973 metric tonnes of inland fish according to the country’s annual economic survey. For the 2019-20 financial year that figure was 227,701 metric tonnes.

The Sindh Fisheries Ordinance 1980 states that catching fish below a certain size is a crime. Offenders could be arrested for six months and have to pay a penalty of up to PKR 10,000 (USD 60).

The nets used in trash fishing – Bullo, Gujjo and Katro – are made of fine mesh that do not allow small fish to escape. These nets have been banned by the government for use in both the inland and marine waters of Sindh. However, the practice continues.

Muhammad Talpur, assistant director of the fisheries department in Badin, told The Third Pole, “We are at sixes and sevens because when we capture someone for trash fishing under the Fisheries Ordinance, his community members and local rights orgnisations start a hue and cry and pressure us to release him. We understand that people are poor and they do this not by choice, but they should understand that the law is law. We have increased patrolling and the number of surveillance teams in the coastal villages and hopefully the practice will decrease.” 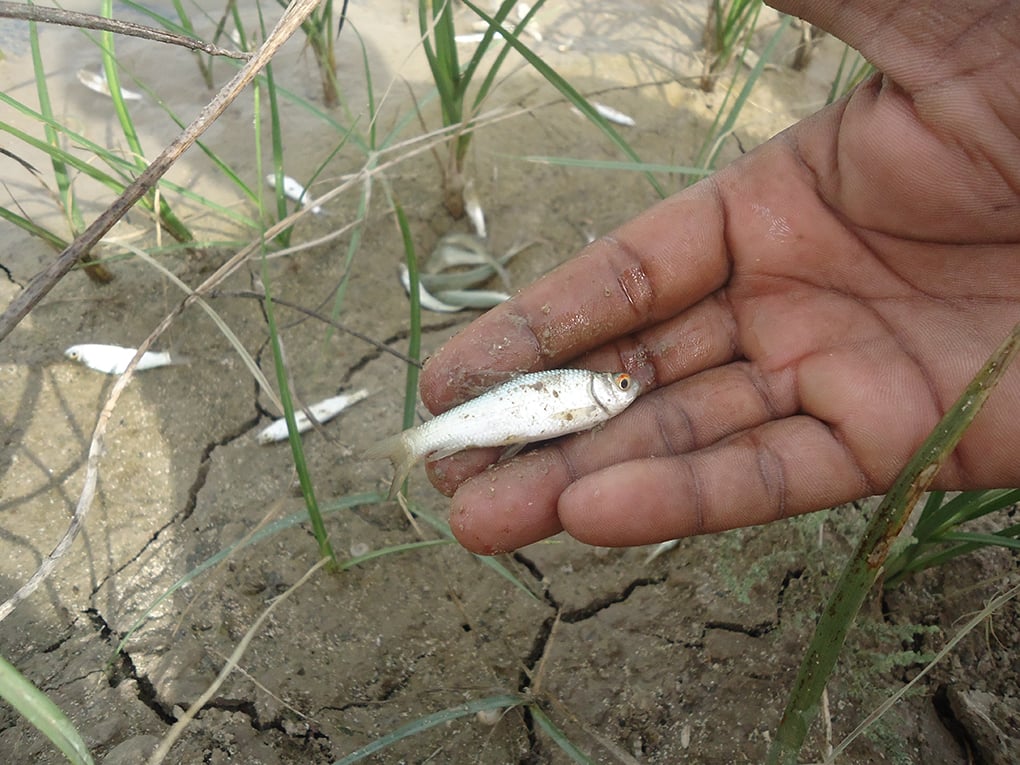 The size of the fish typically caught now [Image by: Muhammad Abbas Khaskheli]

The scarcity of water in the region means land is unproductive, leaving people with few options to earn a living.

The Indus river used to bring a good quantity of water to the region, but this deteriorated when dams and barrages were constructed upstream.

See: A barrage to save, or doom, the Indus delta

“About 12 years ago, canal water used to reach our village,” said Ghulam Mallah, who lives in the last village of the district of Badin before one reaches the Arabian Sea. “There were a lot of big fish of every variety to catch in nearby canals and lakes.”

Mallah said that after disastrous flooding in 2010 the supply of freshwater stopped. “Since then, every day we travel seven kilometres north to catch trash fish in Mir Wah, sell it to a collection centre there and bring some flour and vegetables to our families.”

Ameer Bux, a social activist from Badin, said, “Sindh’s coastal communities are the poorest in the province. Since the area has started witnessing water scarcity, the only source of their livelihood i.e. catching fish has also decreased and consequently they have adopted negative practices like trash fishing.”

See: Fishing villages dry up on the Indus

Two talukas, or sub-divisions, are the epicentres of trash fishing in the district: Badin and Golarchi. According to local trash fish dealers, for most of the year an average of 1,500 kilogrammes of fish is caught in these two talukas every month. But dealers say that this ramps up between August and October, and 20,000-30,000 kg of trash fish can be caught on a single day. This is because by then water carrying fish seed has reached almost all freshwater bodies. As a result, around 2.5 million kg of trash fish is caught annually in Badin and Golarchi.

The practice is linked to the poultry industry, as the fish is used to make chicken feed. There are over 20,000 poultry farms across Pakistan, and the industry has a 10-12% annual growth rate. As it grows, so too does the demand for trash fish.

Subhan Mallah, a local trash fish dealer, said, “All fishermen of the coastal belt have our contact numbers and we have vehicles for collecting trash fish from different locations. We pay PKR 800 (USD 5) per 40 kg and sell it to different chicken feed-making factories in Karachi and Hyderabad for PKR 1,200 (USD 7) for 40 kg.”

The Pakistan Poultry Association declined to respond to a request for comment. 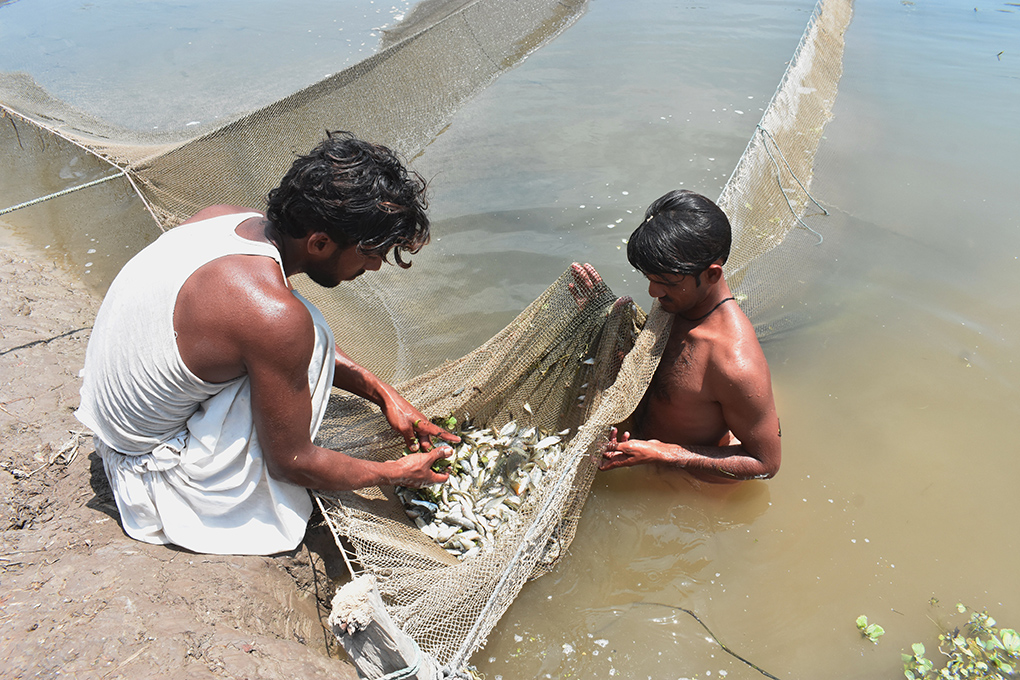 Mukhtiar Ahmed Mahar, director of the Centre for Coastal and Deltaic Studies (CCDS) at the University of Sindh, said “Overfishing of undersized fish, mixing of poisonous industrial waste in inland water bodies and shortage of water have been the prime causes behind the disappearance of many fish species in Sindh’s coastal areas. About 15 years back, there were 176 fish species reported in Sindh but now there are only 35 to 40 species.”

The practice has wider implications. Baradi Waryani, associate professor at the University of Sindh’s Fresh Water Biology and Fisheries Department, explained that many migratory birds visit Sindh’s freshwater bodies. “These birds depend on fish,” he said, adding that the number of such birds is 70% of what it used to be. “The quantity of fish has fallen drastically, and migratory birds avoid these areas now.”

Activist Ameer Bux said, “The government should understand the seriousness of the matter and provide [local people] with alternate sources of livelihood. The youth of these communities are very much involved in this activity; they should be given training so that they can earn their own livelihood without damaging any species.” He also said the government can help establish fish nurseries in villages and settlements, providing fish fries and technical assistance for free.

There is also a need for proper government research on this matter. The district governments of Sindh’s three coastal districts receive “marine research and coastal area development fee/funds”, from oil and gas exploration and production companies working there.

Mukhtiar Ahmed Mahar, from the University of Sindh, said the oil and gas companies provide this funding as a “royalty/production bonus”, but that the “concerned district governments have never utilised those funds for research purpose”. He added that the “marine research fee at least should be utilised to conduct a research study on conserving the threatened fish species of this belt.”

Abubakar Shaikh, the environmental researcher, said that both the government and the fishers are to be blamed. “[The fishers] are cutting off their own feet because they have adopted this shortcut to earn income. For the time being this looks effortless to them, but they don’t want to understand how much devastation it will bring. They are sowing the seeds of unemployment, hunger and deprivation for future generations.”