The state of Meghalaya, in northeast India, has an acute soil erosion problem. One of the rainiest places on Earth, and with a mountainous geography, it faces some natural challenges, but a growing population and unsustainable farming patterns have led to denuded slopes. New techniques, such as an integrated farming system, offer hope for communities suffering from both man-made and environmental disasters.

On a cold and cloudy morning in October, Thrisilon Rynghang, a farmer from the indigenous Khasi community, sowed cabbages, green peas and carrots on four terrace fields in the Ribhoi district of Meghalaya. She had recently harvested ginger, chilies and turmeric, which she sold at the nearby Bhoirymbong market for over INR 15,000 (USD 200). 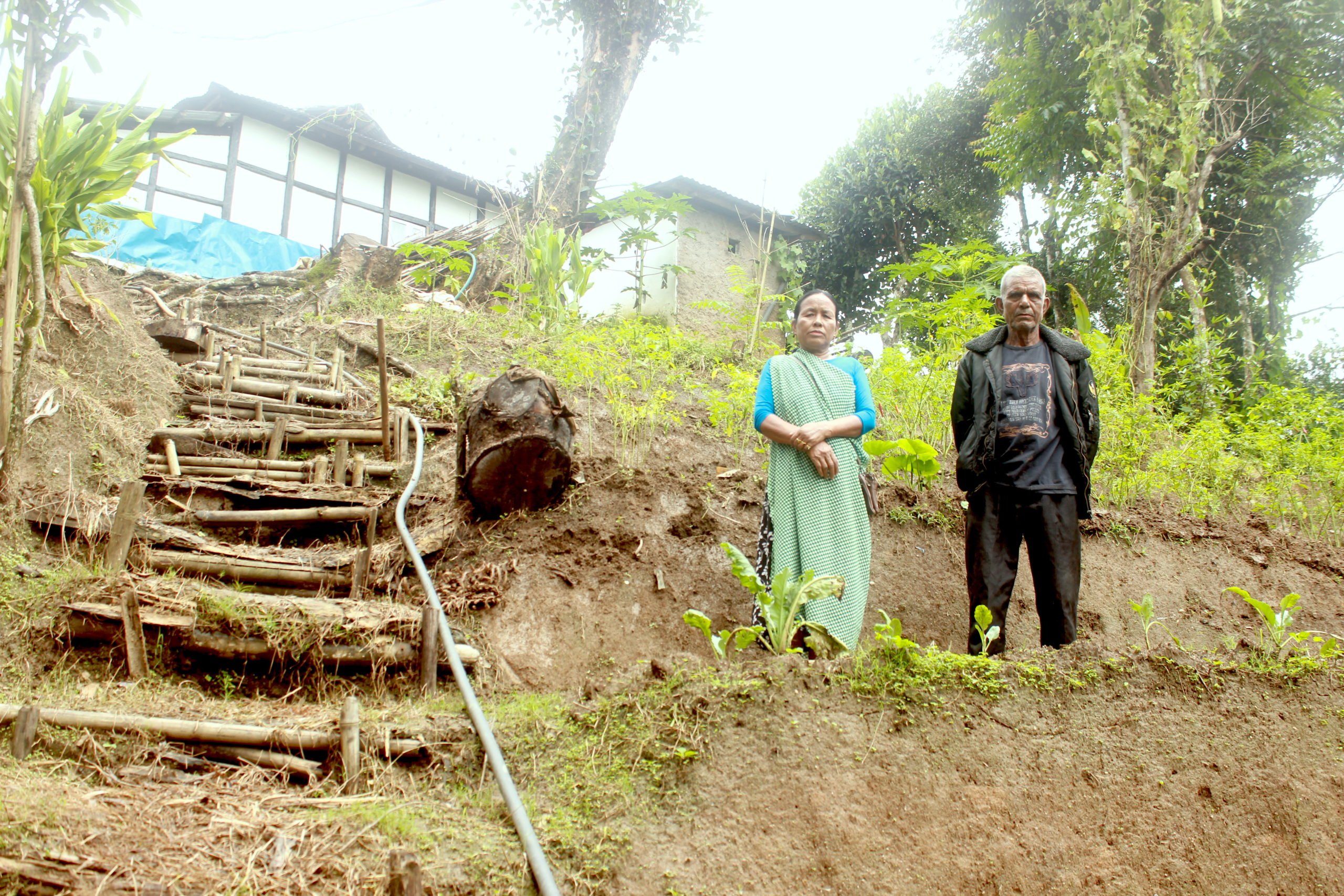 Wearing a traditional Khasi costume, or tap-moh khlieh, made of green chequered cloth, Rynghang said she expected a good harvest of guava and papaya this season.

This is a change in fortune for her. Until 2015, she earned little by selling rice and maize grown through jhum cultivation – a traditional slash and burn agricultural technique – on the slopes of various hills. This method, which is now being used in a more densely populated state, is believed to be one of the drivers of soil erosion in Meghalaya.

“To walk up to hills every day and look after crops would be tedious. A good income would not [be assured] every year,” she said.

Jhum cultivation, or shifting cultivation, is widely practised in the mountainous areas across South Asia. It involves clearing (often by fire) a small plot for intense cultivation, and then leaving it to regenerate for a few years. This form of cultivation works best for small, roving populations, but as inhabitants in former indigenous areas have settled and grown in size, its sustainability has strict limits.

From jhum to an integrated farming system

In 2015, Rynghang found an alternative when she attended a training programme. The programme was about integrated farming systems (IFS) and was organised by the Indian Council of Agriculture Research (ICAR) at Umiam near Shillong, the state capital. She adopted IFS at one of her plots and now earns INR 50,000-100,000 (USD 650-1,300) per year depending on the quantity of produce and market prices. Prior to that, Rynghang would hardly make INR 30,000-50,000 (USD 400-650) as her crops would either fail due to pest attacks or would not attract a good price.

While it has provided stability of income for her, the primary reason for ICAR promoting the new system in Meghalaya has to do with soil erosion. As the population of the small, mountainous state has expanded – nearly doubling from 1.8 million to nearly 3 million between 1991 and 2011 – the soil has come under increasing pressure. Over 70% of the population in the state is engaged in “agriculture and allied activities”, according to the state government, and as farmland per capita shrinks, people turn to the slopes of hills for cultivation. 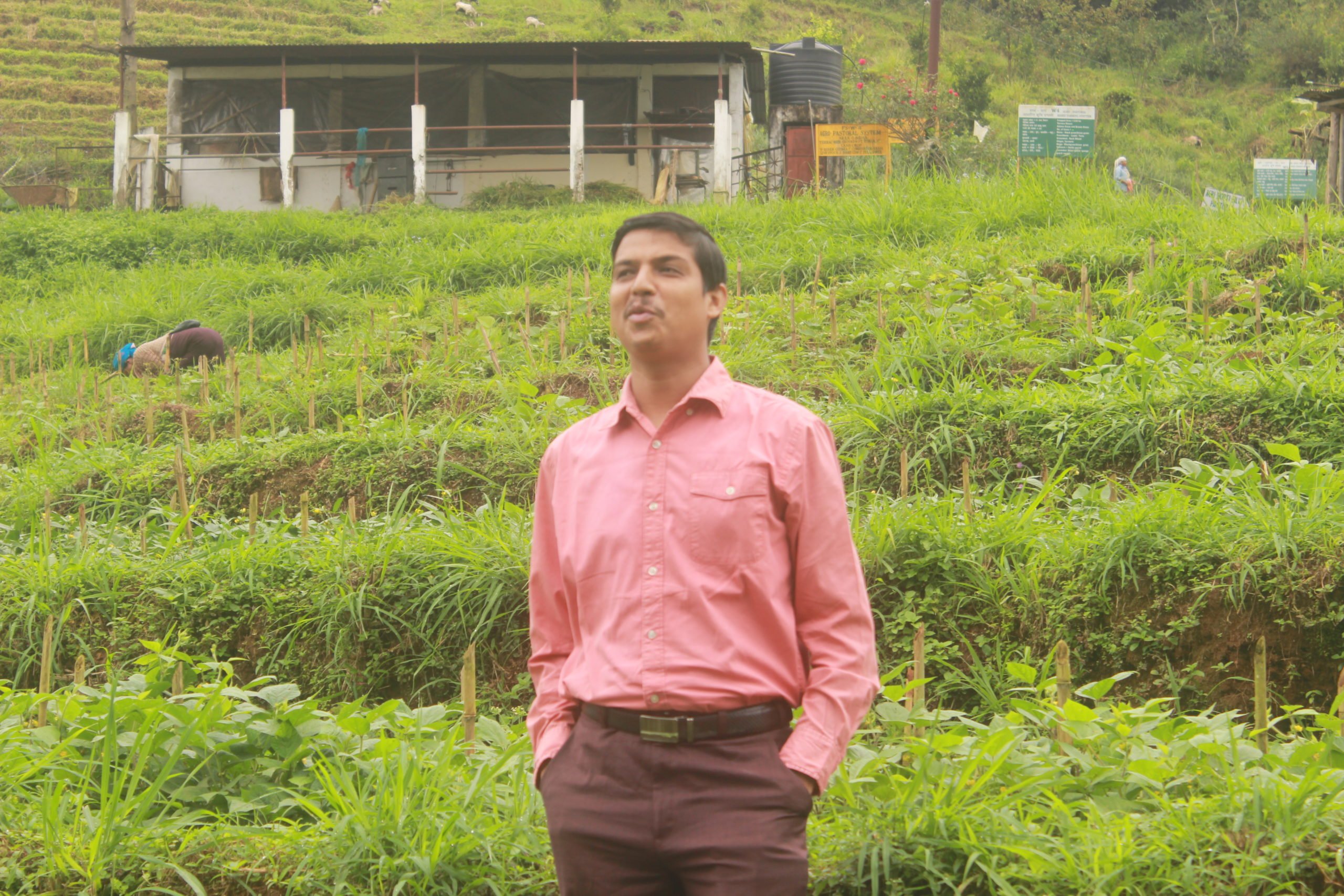 Jayanta Layek, a senior scientist at ICAR, said that in these conditions, traditional jhum cultivation left the slopes bare, with heavy rainfall leading to significant soil erosion. The practice of shifting cultivation causes annual soil loss of 17.62 tonnes per hectare, according to a study carried out by ICAR during 1983-2006, said Layek.

What is an integrated farming system?

An integrated farming system (IFS) is an exercise in the strategic management of land, which tries to minimise risk, secure farmer income and provide food security. The aim is to increase sustainable food production and promote resilience while reducing environmental impacts on agro-ecosystems. ICAR has developed various IFS models. Among them, IFS based on horticulture has proved to be quite efficient in reducing soil erosion, lowering it to 9.36 tonnes per hectare per year.

“Slopes are transformed into terraced fields. Risers [walls] of terrace fields are planted with guinea and broom grasses [to provide] stability to terraces and also to use as fodder,” said Layek. All of these help deal with the challenge of soil erosion in Meghalaya. 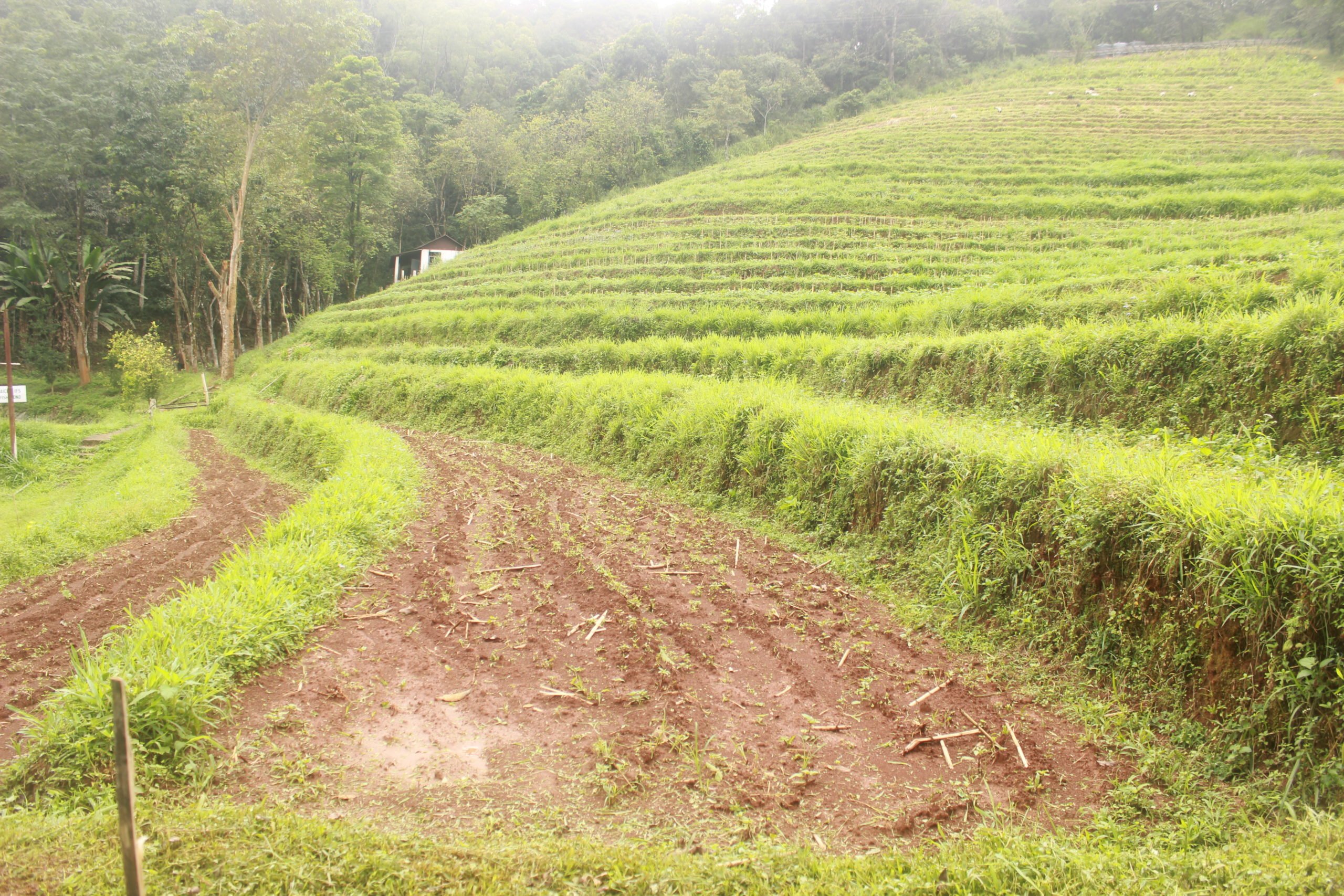 Terraced fields developed on the slope of a hill for farming (Image: Varsha Torgalkar)

“[The] integration of livestock like piggery, poultry and fish have increased the income of farmers. We have made sure to maintain natural forests at the hilltops with high slopes for natural resources conservation [and to] reduce rainfall erosivity. Vermicomposting [a form of composting using worms], crop residue recycling and intercropping are adopted for sustaining soil and crop productivity,” he added.

Despite the resilience this creates for agriculture, it is still difficult to persuade local communities to change their customary way of doing things. While soil erosion in Meghalaya may be an issue that affects all of them, it is economic security that is more urgent. For local communities, the strongest advertisement is the people who have adopted the methods and have found it works. This is where people like Rynghang come in.

The power of good examples

“Since I adopted IFS, I get a variety of food like vegetables, fruits and cereals to consume at home. I could also sell the produce and earn a good amount of money. I get guaranteed income because if one crop fails due to a pest attack or low prices, I get income by selling other crops,” Rynghang tells The Third Pole.

Nobody from [among our] eight sons is interested in farming. They drive tourists’ vehicles. We cannot do much labour due to old age. Pineapple farming is proving helpful for us to survive.

Farm waste like crop residue is useful as fodder for pigs and also for the vermicompost that provides fertiliser to her plants. Eight honey bee boxes at the farm have yielded 12 kg of honey, which sold for INR 6,000 (USD 80). Another INR 12,000 (USD 160) came from selling the pigs she had raised. “Four to five farmers from the village have begun to [use the integrated farming system] by seeing my success,” she said with pride.

Layek and his team at ICAR continue to propagate the method. “We regularly hold training programmes, and distribute seeds and saplings of vegetables and fruits. Our staff hold a live demonstration at their farms and also help with plantation or technical guidance. Over 100 hectares of land has come under IFS across the state.”

The new adherents to the method include people like Thrias Makroh, 60, and her husband Omwell Tamang, 70. Their lives have changed for the better since they began cultivating fruit – pineapple, guava, starfruit and papaya – on an acre of land on the slope of a hill since 2013. Makroh said: “We harvest at least 70-100 tonnes of pineapples per season and earn more than INR 30,000 (USD 400) per year. It is more than what we could earn earlier through traditional farming.” 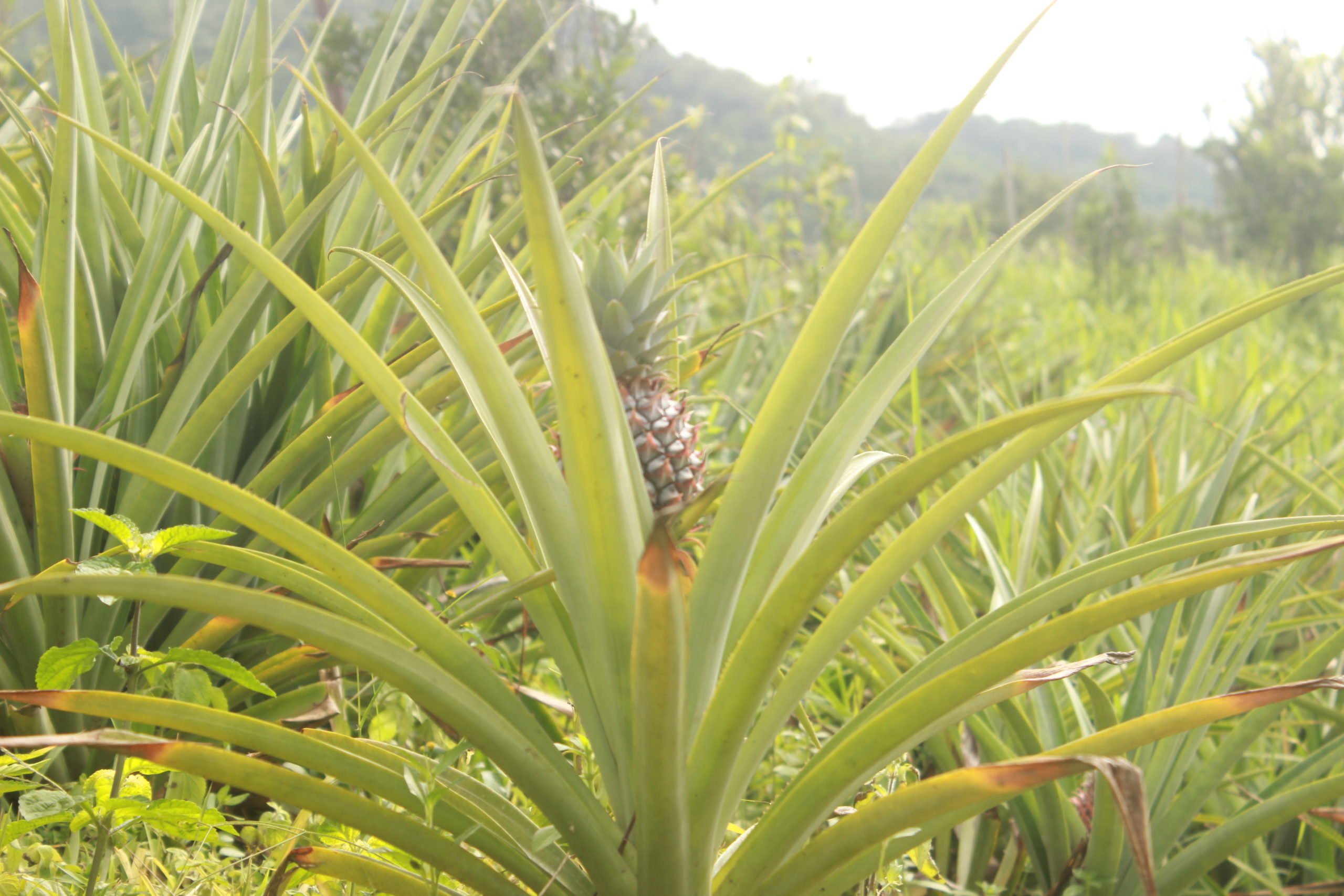 A bonus is that this method is less labour-intensive. “[None of our] eight sons is interested in farming. They drive tourists’ vehicles. We cannot do much labour due to old age. Pineapple farming is proving helpful for us to survive,” she added.

Skola Kurban, a 50-year-old Khasi from Mynsain village in Ribhoi district, said: “Earlier, I would cultivate ginger, turmeric, rice and maize. Prices of these produce would [fall drastically] in a market during harvesting season. But now I cultivate many vegetables, cereals, fruits and also sell pigs and fish. I could sell over 50 kg of vermicompost to many farmers from nearby villages. I earn over INR 100,000 (USD 1,330) per year.”

For Kurban, the advantages are clear. “Earlier I had to work as a labourer to support my income. Now, I end up employing two to three labourers per season for weeding, tilling and harvesting vegetables.”

Neither law nor accident stops coal mining in Meghalaya