Sunning herself on her porch in Koti – a village 28km from the Himachal Pradesh state capital Shimla in the Indian Himalayas – Sumitra Sen makes a garland of mushrooms. “Not any random mushrooms, but the very precious and rarely found guchhi,” she says, using the local name for morel mushrooms. The 43-year-old mother of two has been picking morels since childhood. But this time, in March, six hours of foraging in the forest near her house garnered only enough to make one garland, weighing about 150 grams.

“There are more people and fewer mushrooms in the forest now,” Sen says, as she hangs the garland on a window to dry in the spring sunshine. Sun-dried morel can sell for up to INR 30,000 (USD 392) per kilogram, depending on size and quality. The bigger the mushrooms, the higher the price. 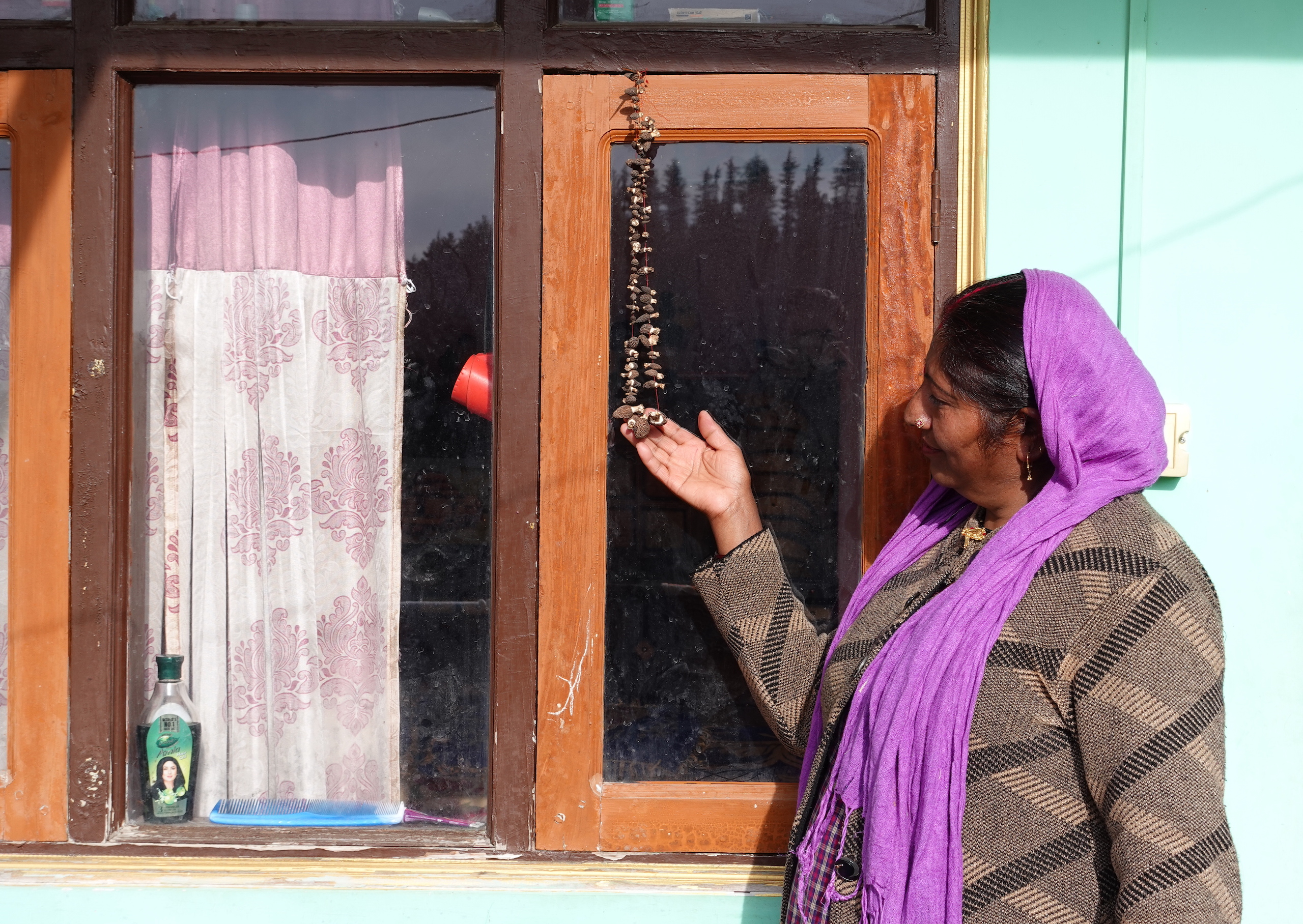 Sumitra Sen with the morel mushrooms she collected from the forests near her house in Koti, Himachal Pradesh (Image: Jigyasa Mishra)

“But for the past decade, the availability of these mushrooms has decreased considerably,” Sen sighs. “This year it feels like we are looking for diamonds in the forest.”

Morel mushrooms – of the genus Morchella – grow wild in many countries across Asia, Europe and North America. One of the world’s most expensive edible mushrooms, many species of morel are culinary delicacies, and some are also used in medicine, reported to have antioxidant, antimicrobial and anti-inflammatory properties.

A 2010 paper estimated that global production of morels was about 150 tonnes in dry weight, with India and Pakistan the major producers, each exporting around 50 tonnes per year.

In India, morels are found in the Himalayas, in Himachal Pradesh, Jammu and Kashmir, and Uttarakhand. They grow on the bark of old trees and in grasslands in cold wet weather, and are collected in the spring (late March to early April), mostly by local women and children.

Sen recalls how morels were collected with ease, in abundance, until around a decade ago. In the past, she could pick enough to cook some at home before selling the rest. But no longer. 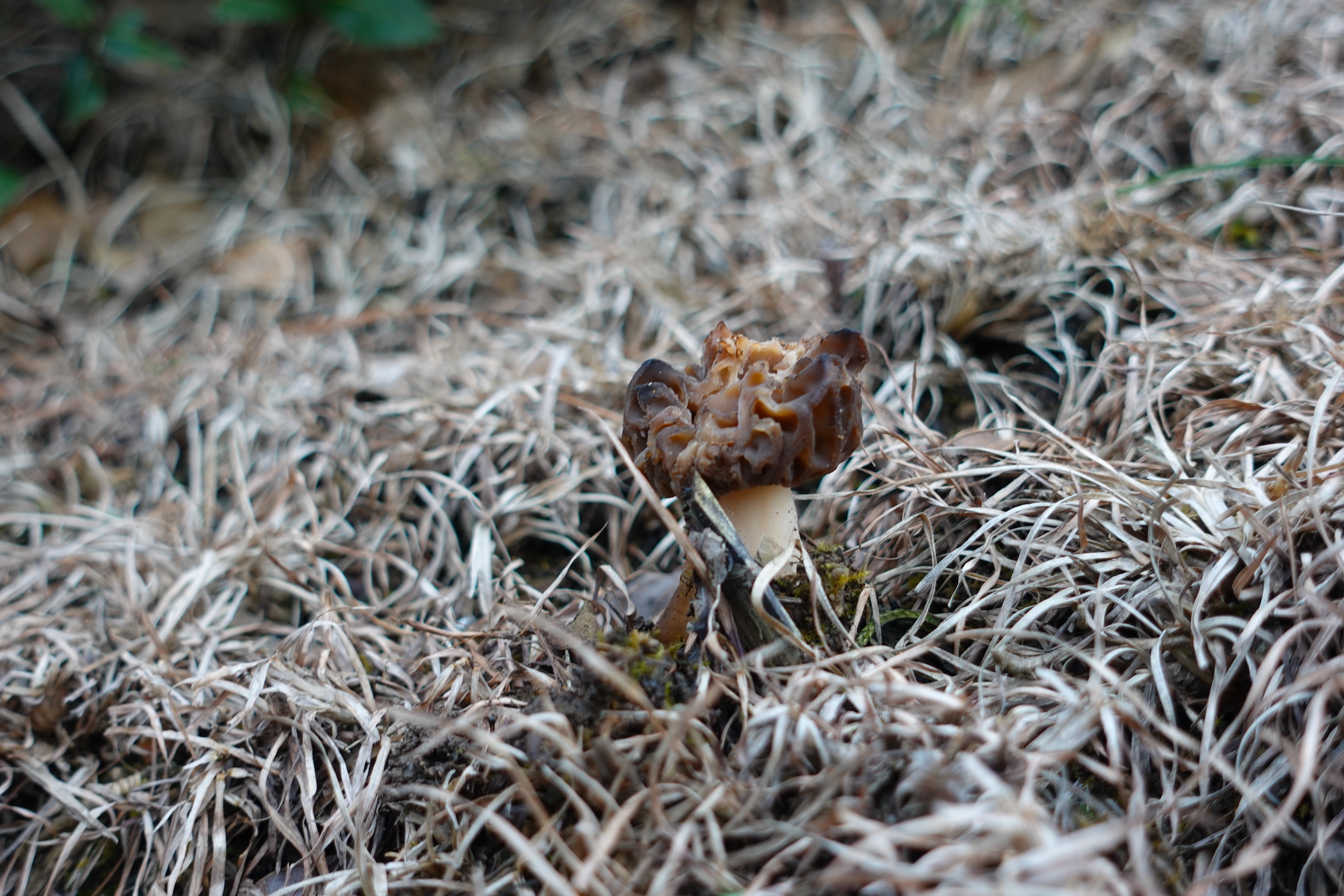 A morel mushroom growing in the wild near Koti village (Image: Jigyasa Mishra)

In Kashmir, too, the quantity of morel collected this year has been lower than any Tabassum Bano can remember. Bano, a homemaker based in Anantnag – around 60km from Srinagar, the Jammu and Kashmir summer capital – tells The Third Pole: “Guchhis mark the arrival of spring to us. It has been a dry spring this time.”

Rouf Hamza Boda, a teacher in Anantnag and author of a book on mushroom identification, says that hotter springs may be to blame. “With the arrival of summer-like situation in March itself, when everybody is facing water crisis in Kashmir, guchhis have no chance to grow or sustain anymore,” he says.

This spring, rainfall has been well below average across much of the Himalayan region. Sonam Lotus, former head of the Srinagar station of the India Meteorological Department (IMD), tells The Third Pole that rainfall in Jammu and Kashmir this March has been 80% less than average, with Srinagar receiving only 21.3mm of rain, against a normal of 117.6mm.

In Himachal Pradesh, Sen says there has been no rainfall in Koti this spring, halting the growth of morels. The IMD reports that 93% less rain than average fell in Shimla district (where Koti is located) between 1 March and 19 April this year. Total rainfall during this period was 7.6mm, compared to the long-term average of 116mm.

Roxy Mathew Koll, climate scientist at the Pune-based Indian Institute of Tropical Meteorology, says this is part of a longer trend. “March 2022 was India’s hottest March in recorded history (1901-2022). The temperatures were high [across] India, especially the northwest regions that underwent a heatwave … The temperatures averaged over India during 1986–2015 show significant warming trend of about 0.15 degrees Celsius per decade,” he says.

Loss of habitat may also be compounding the impacts of hotter, drier weather. In Kashmir, Boda has been researching morel habitat for two decades. “Most of the morels grow on old, rotten apple trees and their remains,” he says. “But now in various orchards old apple trees are replaced by high-density small trees where morels do not grow.”

A future for morel mushrooms in the lab?

Morel mushrooms have historically proven difficult to cultivate commercially, and the global market still relies on collection from the wild. But in the past few years, the Directorate of Mushroom Research (DMR) – located in Solan, Himachal Pradesh, and run by the Indian Council of Agriculture Research – has, for the first time, successfully cultivated the morel mushroom.

V.P. Sharma, director of the DMR, tells The Third Pole, “We successfully cultivated Morchella in 2020 and 2021 [in a greenhouse] but we still need to improve its quality before giving it to the farmers. We might need a couple more years before we give the mushroom to farmers for commercial cultivation.”

But the early arrival of hot weather may impact even this research. “Last year we were conducting trials in March and the crop was available till April, but this year we [experienced] heat waves in March and we did not have any crop post mid-March.” Solan, in the Himalayas, is 1,550 metres above sea level.

Anil Kumar, a senior scientist at DMR, says: “There has been a visible seasonal shift in morel’s availability.” Kumar, who has been working on domesticating the cultivation of morels since 2019, added another reason for reduction in yield: with morels proving so hard to find, people are now plucking all the mushrooms they come across, leaving no spores to grow into mushrooms the following spring.

With the availability of morel in the wild falling due to climate change, cultivation is likely to be the future. But Sharma suggests that once morel can be cultivated at scale, the price might be lower than for those obtained from the wild. Therefore, the morel mushroom’s days as one of the world’s most expensive mushrooms might be numbered.

Fears for farming as groundwater plummets in northern India

Explainer: What is regenerative agriculture?