With scant rainfall meaning little access to clean water either to drink or for irrigation, Khiolo, her husband and five children were forced to flee their village in Badghis province in May when farm labour work dried up. The family had already sold their livestock. Still, they could barely even afford to buy bread. They used their last remaining money to travel to Herat, where they now live in a camp hosting internally displaced people.

“It was a hard drought. There was no water, no jobs, nothing,” says the thin mother, her youngest child nursing in her arms.

“We would dig holes and line them with plastic to store any water we collected from the rain and snowfall but this year we had barely any of either.” 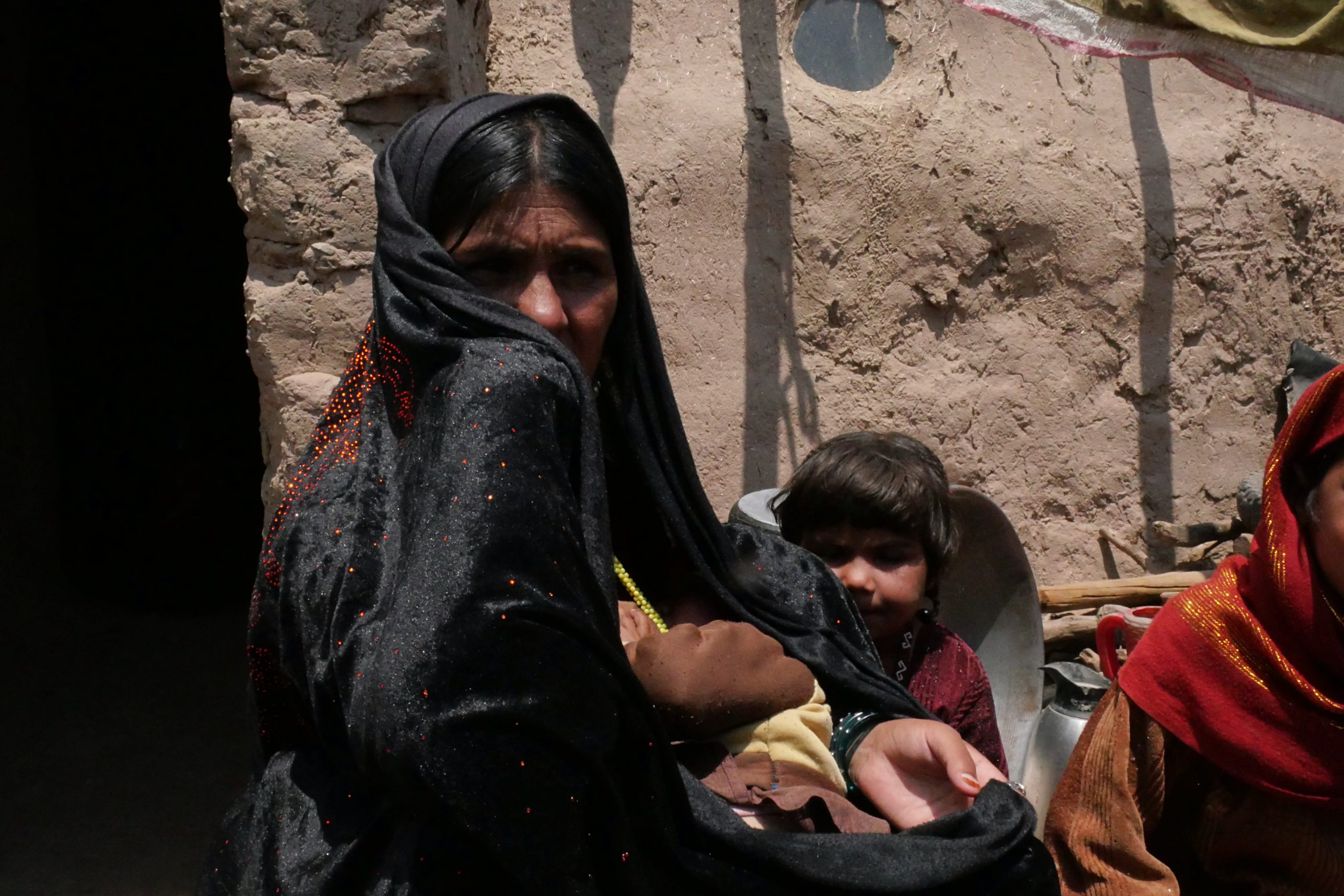 Khiolo with her youngest child outside their home in a camp for internally displaced people in Herat, western Afghanistan. They recently fled their home village in Badghis as a result of drought which left her husband with no work and no way to feed their children. (Image: Charlie Faulkner)

Afflicted by years of war and hindered by disputes within the government, as well as clashes stretching across ethnic divisions and a landscape that impedes access to rural communities, tangible water resource management in Afghanistan is all but non-existent.

Just 42% of Afghans have access to safe drinking water and only 27% of the rural population have access to sanitation facilities, according to USAID. The country had significantly reduced rain and snowfall this past winter compared with the long-term average – 34% and 44% respectively. But experts say the problem is management of water rather than a lack of it.

“The country’s population was 10 million during the 1960s and the water resource and irrigation infrastructure was sufficient. The population has since grown three times that but there was no expansion of infrastructure,” said Assem Mayar, lecturer in water resource management at Kabul Polytechnic University. Mayar added that there is enough water, but it is not managed to be accessible throughout the year.

The first attempt to manage drought was in 2018, he recalled. “Before that, the government had no plan for drought management. The drought that year affected 22 of the country’s 34 provinces and displaced more than 260,000 people. It also exacerbated the country’s food security issues and left nearly 10 million people facing a food crisis that year.” 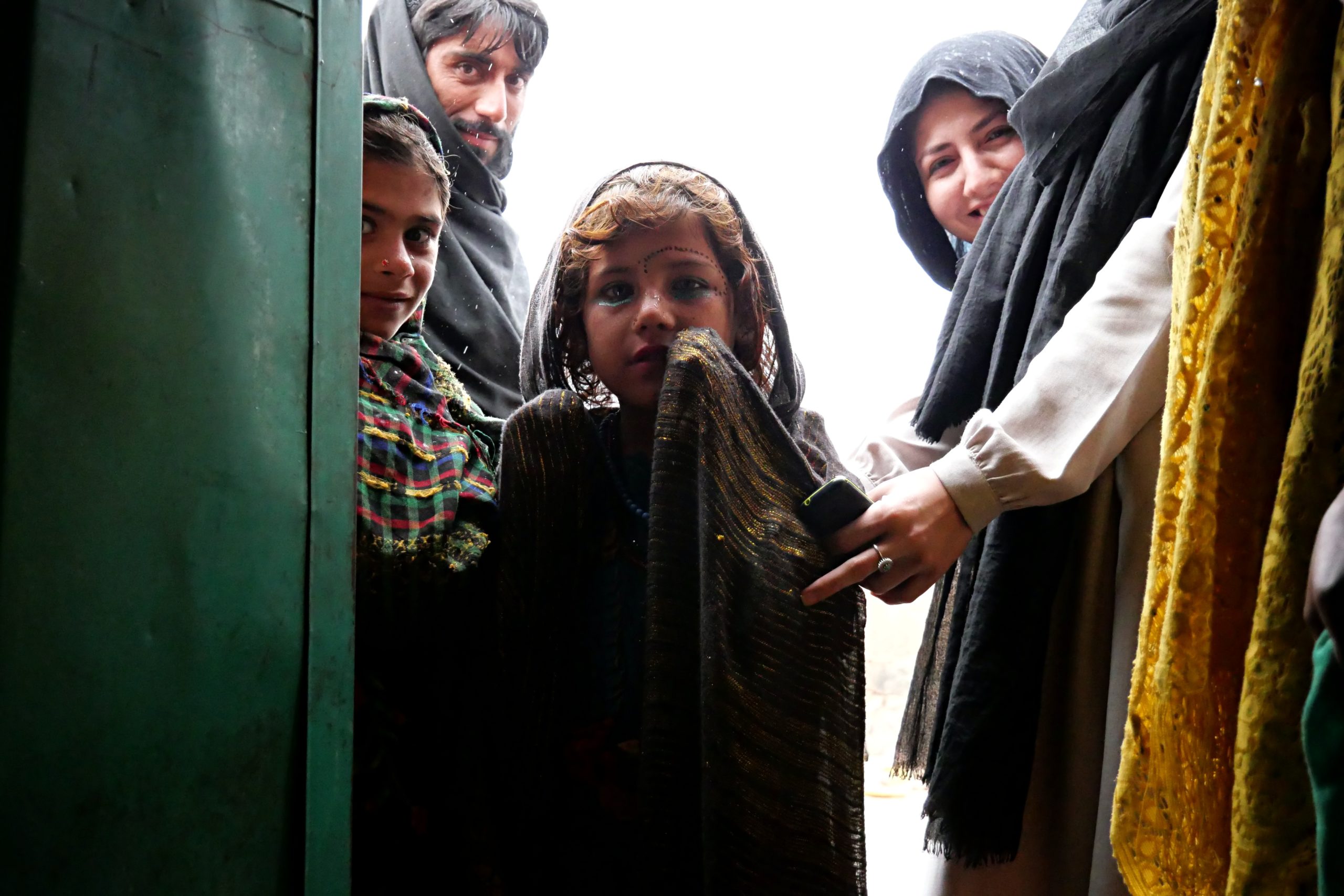 A girl with her face decorated with glitter and makeup stands in the doorway of a mud house among family members in an unofficial camp for internally displaced people in Herat (Image: Charlie Faulkner)

In May this year, more than half of Afghanistan was already experiencing drought, and the situation is only going to get worse as the population swells and the impact of climate change increases. These crises are poised to become more frequent. Afghanistan ranks 10th among the countries most vulnerable to climate change on the Notre Dame Global Adaptation Index. If access to water is not taken seriously, famine will become a more prevalent issue, warned Mayar.

“From 1900 to the 1980s, the development and management of water resources were shaped by the ‘industrial modernity’ paradigm. In that era, the focus of governments was to develop large-scale infrastructures, often referred to as ‘hydraulic mission’,” says Nawid Rasooly, a hydraulic engineer and water management and governance expert.

Afghanistan started its hydraulic mission in 1950, but soon went to war while other countries around the world continued constructing large-scale water infrastructures, Rasooly explained.

“Then we saw the introduction of the environmental movement in other countries, particularly in the west, which led to the creation of environmental organisations, as well as education and awareness,” he added. “We then saw a shift to privatisation and putting value on water.” Afghanistan never experienced these further developments affecting water management.

One size does not fit all

Then in 2005, the globally recognised Integrated Water Resources Management (IWRM) method, which had become a panacea for water issues around the world, was implemented in Afghanistan.

“IWRM came as a blueprint from western organisations. But in Afghanistan the ground was not ready for the implementation as there was a massive shortage of hydraulic infrastructures. There was no civil society, the government was weak, there were no environmental organisations, and no private sector,” said Rasooly. “So, who is going to implement the framework? This was one of the major problems overall as to why water management failed.”

What is the Integrated Water Resources Management framework?

IWRM is a model based on the experience of water practitioners. The international network Global Water Partnership describes IWRM as “a process which promotes the coordinated development and management of water, land and related resources, in order to maximise the resultant economic and social welfare in an equitable manner without compromising the sustainability of vital ecosystems”.

The Interim Afghanistan National Development Strategy (I-ANDS) was adopted in 2006, with the goal of rehabilitating irrigation, improving groundwater resources and introducing the IWRM model. In 2008, a five-year water plan was developed alongside the I-ANDS.

“The 1991 Water Law was revised and adjusted according to IWRM principles, which led to significant changes in the water sector – at least in a bureaucratic sense, including changing the unit of water management from political boundaries to river basins,” said Rasooly.

“The problem has never been a lack of framework for water management in Afghanistan. In fact, it had a very ambitious framework, but very little was implemented.”

A further challenge was that international donors “were not interested in funding basic infrastructure because of the transboundary components” – which was what the Afghan government wanted, Rasooly explained. Instead, their focus was on building institutions and policy.

Afghanistan has just one water treaty – the 1973 Afghan-Iranian Helmand River Water Treaty – despite being in the basins of four transboundary rivers with five other countries. There are also examples of how Afghanistan has not been incorporated into regional frameworks, such as the 2004 Iran-Turkmenistan dam which is on the Harirud River flowing from Afghanistan.

“We are not ready to establish agreements with our neighbours. Scientifically we are not ready – we don’t have the data to understand what we need and the amount we should be supplying our neighbours,” said Asef Ghafoory, former chief of staff at the Ministry of Water and Energy (MoWE) and current assistant professor of journalism and political science at Kardan University in Kabul.

A decades-long conflict has also been a big factor, both in terms of the impact on financial capacity and ground-level implications. The Taliban captured Dahla dam – Afghanistan’s second-largest – this May. In early July, 16 security personnel stationed at a checkpoint at Salma dam were killed. There is a history of disputes with neighbouring countries which has led to attacks on water infrastructure.

The unstable security situation also restricts access to rural communities to provide education on water or to build capacity and skills. A major repercussion of the war is that it also means fewer funds are available for issues like water management, and the prospect of attracting private investment is slim. 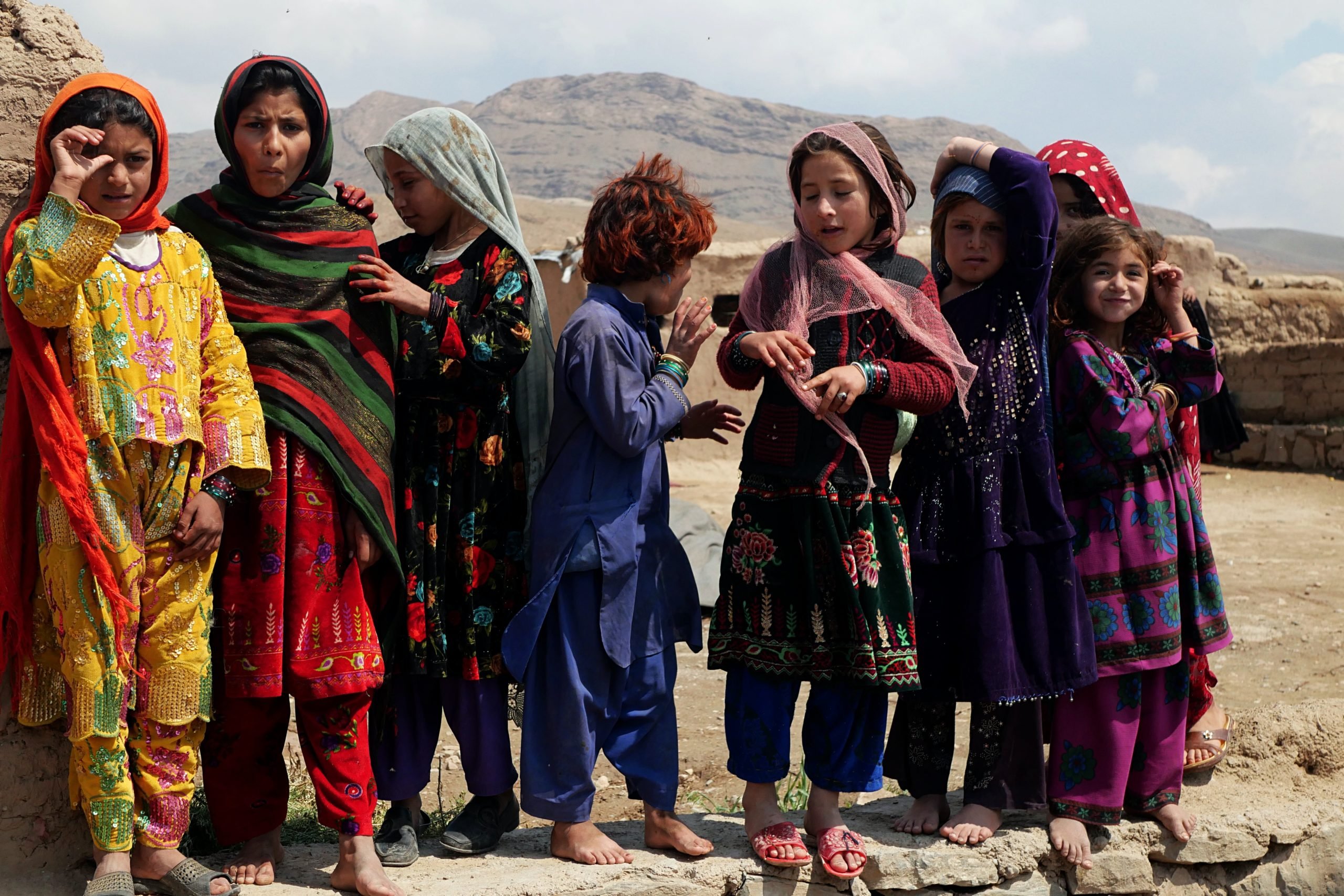 Children play atop a small wall in an unofficial camp for internally displaced people in Herat (Image: Charlie Faulkner)

“Billions of dollars have flowed into the country, but how much of that cash has been directly invested into water resources management?” asks Abdul Basir Azimi. He was deputy minister for finance in MoWE between 2016 and 2018.

Azimi points out that following four decades of war, Afghanistan does not just need new projects, but also extensive rehabilitation of existing infrastructure. All of this is very costly.

“We should build large-scale dams for water storage, develop canals, invest in the refining system and better water supply system in cities and customer services,” he said. “You need financial resources. You need effective, efficient, accountable management – corruption and lack of capacity are factors we cannot ignore.”

Azimi also highlighted the problems of a centralised system.

“Everything is managed from Kabul. We have local water authorities and mayors, governors, but at the end of the day the budget and the procurement of projects is managed in Kabul,” he explained. 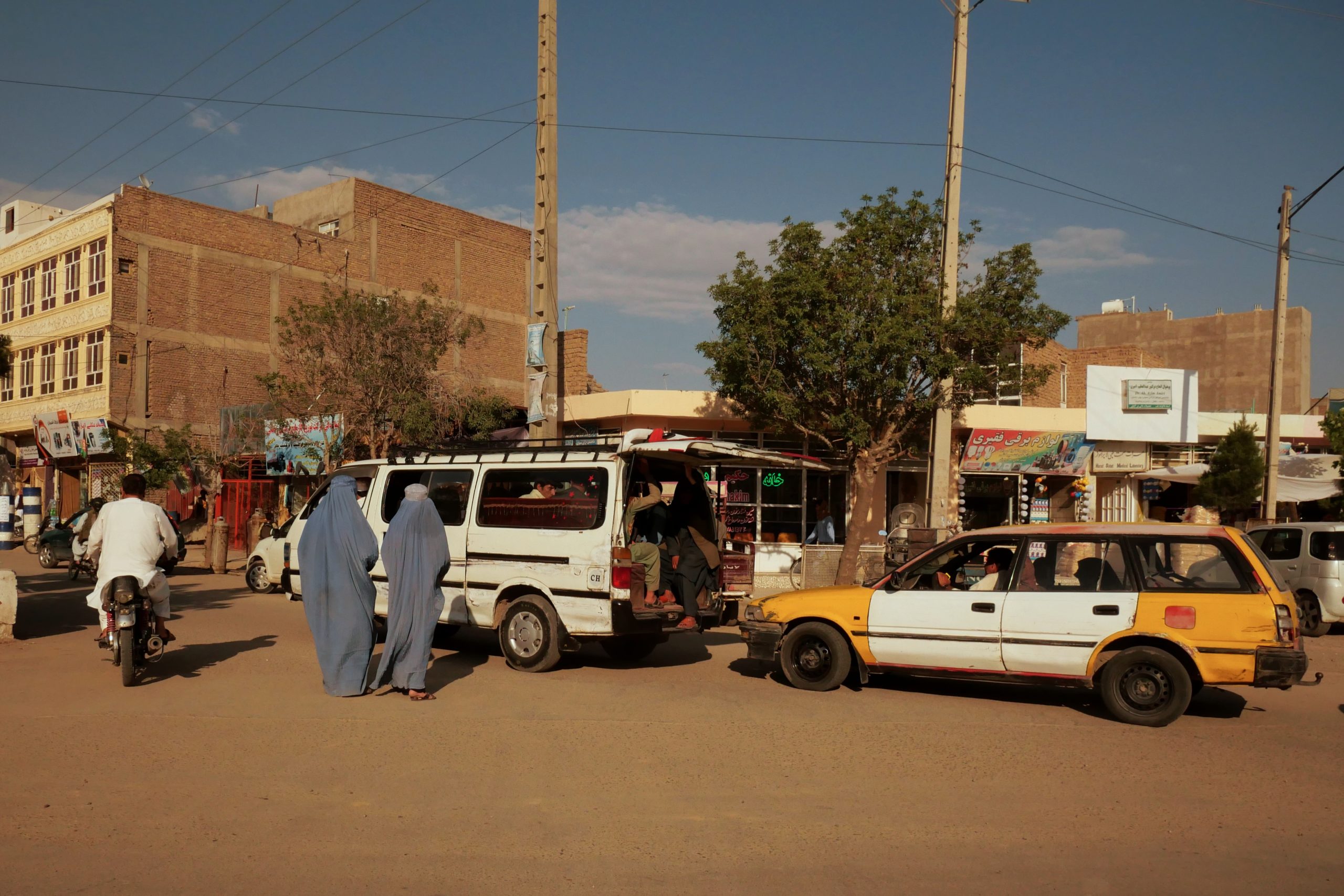 And recent developments have only added to that issue. The MoWE was split into two in 2019, one of which is the National Water Affairs Regulation Authority (NWARA).

“NWARA’s available network is functional but it is not financially or technically in the position to help communities, to enhance the capacity to access clean water,” said Tayeb Bromand, water resources and climate change specialist. Unlike the ministry of water, NWARA does not report to parliament which means there is no transparency in terms of how funds are being spent, Bromand said, adding: “Most of the projects implemented in the last 20 years are not being maintained. If the situation continues as it is right now, access to clean water will decline.”

Water and food shortage imminent in the Himalayas