Russia’s invasion of Ukraine could delay the completion of Bangladesh’s first nuclear power plant. With a planned capacity of 2,400 megawatts – around twice the generating capacity of the Payra coal power project – any delays to the Rooppur nuclear plant, scheduled to be completed by 2024, would leave a significant gap in Bangladesh’s power sector development. The Third Pole has learned that officials are already preparing backup plans.

Russia is providing 90% of the funding for the USD 12.65 billion project, and construction is being carried out by a Russian state-owned company in the west-central district of Pabna. The government of Bangladesh is funding the remaining 10%. Rooppur is part of Bangladesh’s plan to shift its reliance from highly polluting coal and other fossil fuels.

Shortly after the invasion of Ukraine on 24 February, the US, EU and UK implemented sanctions on Russian banks and their access to SWIFT, an international payment system. As more rounds of sanctions are imposed, the environment is tightening for Russian businesses and the organisations they transact with. The Ministry of Power, Energy and Mineral Resources is sufficiently alarmed at the potential loss of resources for the nuclear power plant that it has started to prepare for alternatives such as coal and renewable energy sources.

Nasrul Hamid, the state minister for the Ministry of Power, Energy and Mineral Resources, said Bangladesh’s current power generation capacity is 25,500 MW. “Our estimate is by 2030 we will require a staggering 40,000 MW of electricity including the 2,400 MW from Rooppur power plant,” said Hamid.

If construction of the Rooppur nuclear power plant is hampered, possibly we will not see any problem in getting power from other backup coal projects

Nasrul Hamid, state minister for the Ministry of Power, Energy and Mineral Resources

“If construction of the Rooppur nuclear power plant is hampered, possibly we will not see any problem in getting power from other backup coal projects and some renewable sources.”

Ijaz Hossain, an energy expert and dean of the faculty of engineering at Bangladesh University of Engineering and Technology (BUET), told The Third Pole that the economic sanctions imposed on Russia would impact the completion of the Rooppur project.

“Russia is a military power, not an economic power,” Hossain said. “If the war between Russia and Ukraine lingers, it would further weaken Russia economically. In that case, Russia would not be able to continue the construction of the Rooppur power project; it will be delayed.”

Assurances that Rooppur is on track

“The Russian government has given us a letter that the ‘special military operation’ in Ukraine will not hamper the construction of the Rooppur nuclear power plant. They will finish the project in time. We want to believe it,” said Hasan.

“Russia is a big international power, and I think they would find an alternative mode of funds transfer to fund the project,” he pointed out.

Rosatom, Russia’s state-owned atomic power corporation, will supply uranium and other materials needed for running the Rooppur plant, Hasan said. At the time of writing, the company, which is the world’s biggest supplier of nuclear fuel and reactors, had not been sanctioned due to concerns at the impact on the operations of nuclear power plants worldwide. 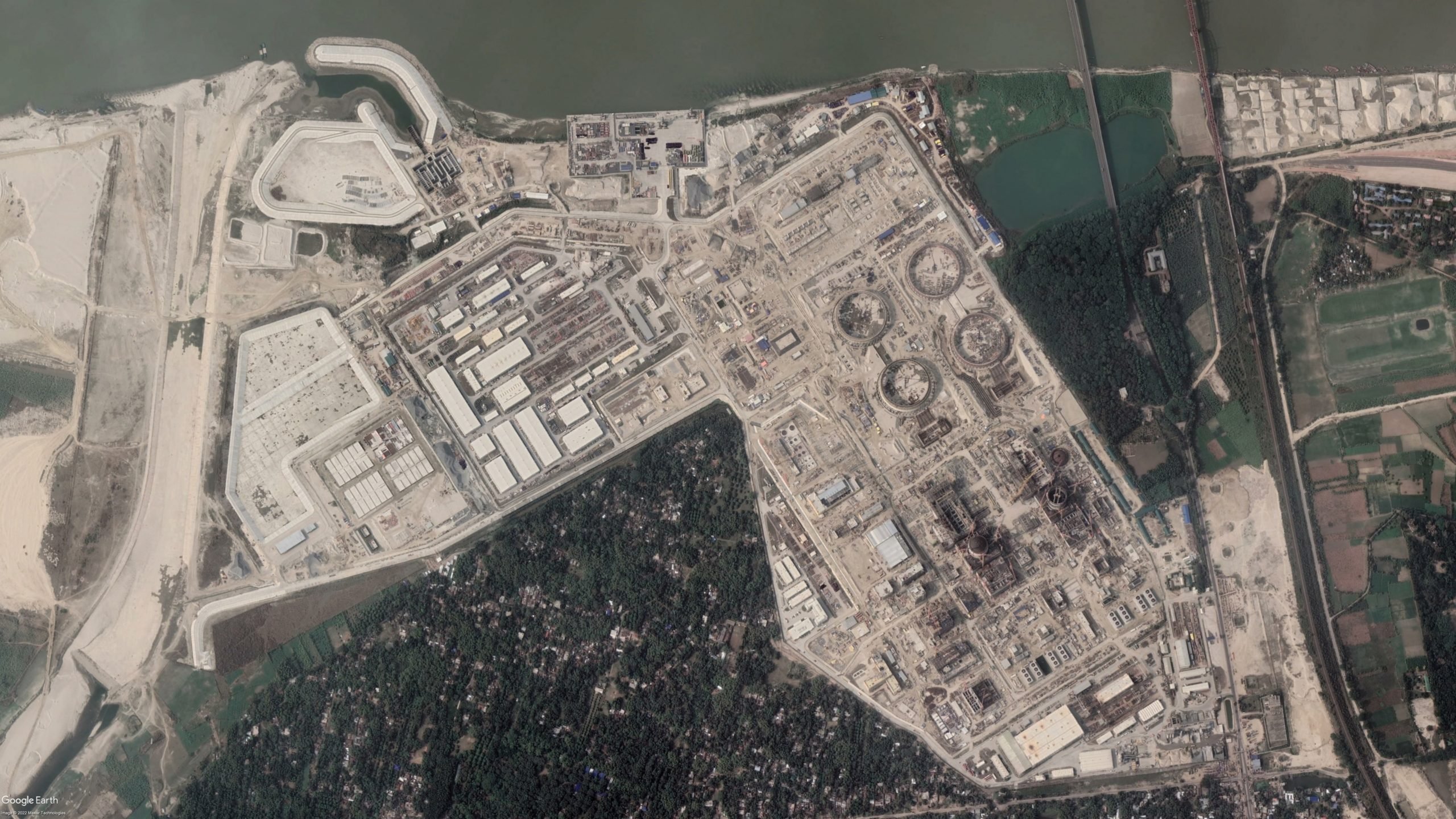 The Rooppur nuclear power plant is being built in the west-central district of Pabna beside the transboundary Ganga River, known as the Padma in Bangladesh (Image © Maxar Technologies via Google Earth Pro)

But “if the war in Ukraine prolongs, we fear that there could be some problems in implementing the Rooppur nuclear project”, said the secretary.

There are other factors that could jeopardise the project, pointed out Hossain, the dean at BUET. “Western countries may pressure Bangladesh to stop economic engagement with Moscow in case the hostilities between Russia and the US-led western countries continue to escalate,” he said.

Rooppur, development and the energy transition

Bangladesh has factored the 2,400 MW from the Rooppur nuclear plant into its six-year plan for electricity generation. In 2026, it plans to add 502 MW of generation capacity to the grid: an important milestone year for the country in terms of its socioeconomic development, as it is expected to graduate from the Least Developed Countries (LDC) status to a developing country.

One of the most-climate vulnerable countries in the world, Bangladesh has pledged to cut its emissions of heat-trapping gases by 22% by 2030 compared with 2012. The government plans for nuclear power to account for about 10% of total power generation after 2030.

Nuclear plant has been 60 years in the making

Rooppur was planned in the early 1960s when Bangladesh was part of Pakistan – one of the two nuclear states in South Asia. A study found the project to be feasible. But the government at the time shelved it for unknown reasons.

After gaining independence in 1971, the government explored the possibility of reviving the project, but hit snags. In the 1980s, governments made further unsuccessful attempts to implement it.

The Rooppur nuclear power plant resurfaced in 2007-08, when the country had a huge power deficit resulting in outages across the country. The military-led government discussed it with China and South Korea but discarded the plan.

Then, on 29 December 2008, the present government led by Sheikh Hasina came to power. It revived the construction of the Rooppur nuclear power plant, this time with Russian support. In 2011, the two countries reached an agreement to cooperate on the construction of the plant. The Bangladesh Atomic Energy Commission and Rosatom are the lead agencies for the Rooppur nuclear power project.

In 2016, the two governments signed an agreement for the financing of the project, with Russian state banks providing USD 12.65 billion. Construction started in 2017, carried out by Rosatom under an EPC (engineering, procurement and construction) contract. Under the contract, JSC Atomstroyexport, a Russian engineering company and fully owned Rosatom subsidiary, provides all equipment, machinery, scientists, engineers, technical personnel and other staff for the project.

If the war in Ukraine prolongs, we fear that there could be some problems in implementing the Rooppur nuclear project

Ziaul Hasan, secretary of the Ministry of Science and Technology

He said the Bangladeshi government has a 10-year grace period. In 2027, it will start to pay the debt back over the following 20 years.

The Russian state-owned company is training local technicians in Bangladesh, who will take over the operation of the plant 10 years after its launch.

In October last year, prime minister Hasina announced a plan for a second nuclear power plant in Bangladesh. The Atomic Energy Commission has already suggested some sites for the second nuclear power plant, Hasan said. A government source, speaking on condition of anonymity, told The Third Pole that the government has yet to decide about the second project, and that the Russian government was interested in implementing it.

Hossain, the professor at BUET, cautioned: “Given the international order after the invasion of Ukraine, I think the government would not be in a position to build the second nuclear plant with Russian support.”

China falls out of love with nuclear