In 2013, an Indian engineer started a sustainable development enterprise called Global Himalayan Expedition (GHE). Since then, it has installed solar power in 131 villages of three regions of India, changing the lives of more than 60,000 people. One of the ways it has achieved this is by organising ‘impact expeditions’, which bring travellers to remote regions and use their fees to raise funds for community energy projects.
In recognition of its work, in October GHE became one of 13 companies to win a UN Global Climate Action award. The UN described GHE as “one of the world’s first organisations using the force of tourism coupled with technology to bring solar energy to remote communities”, and said this was “an easily replicable model because of the simplicity in approach”. There are an estimated 16 million people without access to energy in the Hindu Kush Himalayas.
The Third Pole spoke with founder Paras Loombaand chief operating officer Jaideep Bansal to find out more about the company’s work, which mainly takes place in the north-west region of Ladakh. 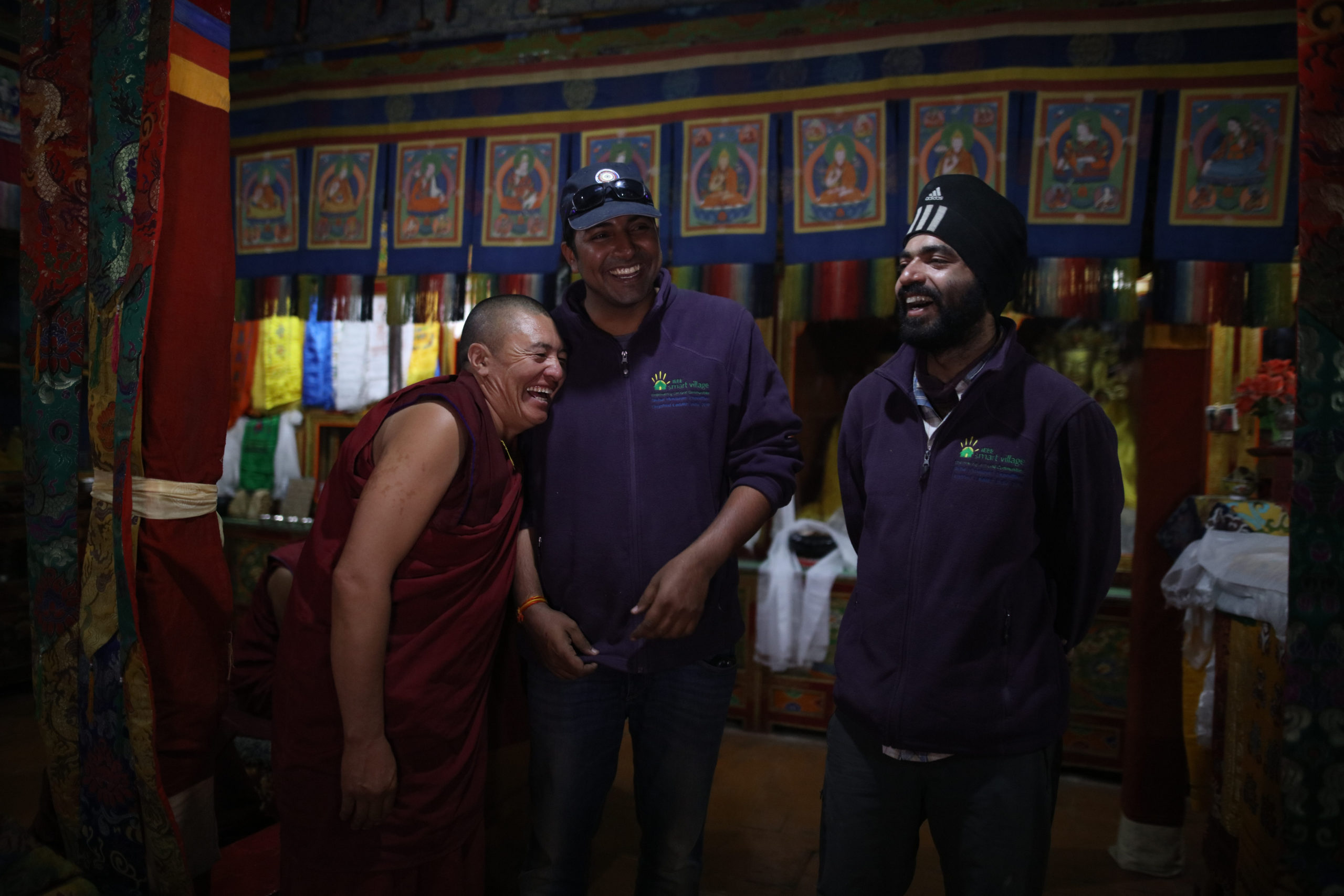 The Third Pole (TTP): You won the financing for Climate Friendly Investment award. Can you explain how that aspect of GHE works?

Jaideep Bansal (JB): The hamlets and villages that we electrify are funded by multiple models. One of these is impact expeditions. When people sign up for our expeditions, between 25% and 30% of their fee is used to fund the capital cost of the hardware, transportation, installation and training of solar micro-grids for the villages. The micro-grid infrastructure is owned and operated by the community. This is where the UN has recognised us for financing climate solutions using an innovative approach.

Typically, energy companies will invest in a solar grid, but will ask the community to pay back the money. We believe that to advance development you can’t put the burden on the poor by asking them to pay you back as well as give your social impact investor an interest rate return.

TTP: Winning the UN award must have been a highlight in a difficult year. How has the pandemic affected you?

JB: Due to Covid-19 we’ve postponed all expeditions to 2021. This meant we were able to expand our footprint across the other initiatives we work on and look into innovative new technologies. We’ve developed a device that allows travellers and villagers to monitor their basic health parameters such as heart rate, oxygen levels, temperature and respiration rate; set up 38 solar water heaters; installed 30 greenhouses to enable a farm-to-fork concept in our homestays and to improve food security; and are working on solar-powered health centres.

TTP: What inspired you to start GHE?

Paras Loomba (PL): In 2012 I went on a trip to Antarctica. For the first time I experienced climate change – icebergs breaking down, rainfall in Antarctica. You see these things and your whole vision towards the planet and your life changes.

In 2013 I quit my job and launched an expedition to see if I could do something impactful for the communities in the Himalayas. Both our fathers are ex-Indian Army officers, and we lived in these regions when we were young, so we were aware of their beauty and challenges. I was aware that Ladakh didn’t have access to many facilities; I’m an electrical engineer and Jaideep is a mechanical engineer, so when we started it was all about the electrification of villages that had no access to grid-based electricity.

JB: I was a participant on the first expedition, and what I saw on the ground inspired me so much. I was working at Procter & Gamble, making and selling shampoo, and I realised, “It’s fine, it’s good, but what’s the end-goal, what’s the purpose behind it?”

TTP: Where do your solar panels come from?

PL: All the electronics and the hardware, except the wiring, is designed and manufactured by our company. We have our own designs and contract-manufacture them. This means we can train the community so that if anything goes wrong, they can open up the hardware and repair it – rather than throw it away. The technology is all Indian-manufactured and the designs are open-source, so anyone can use them. 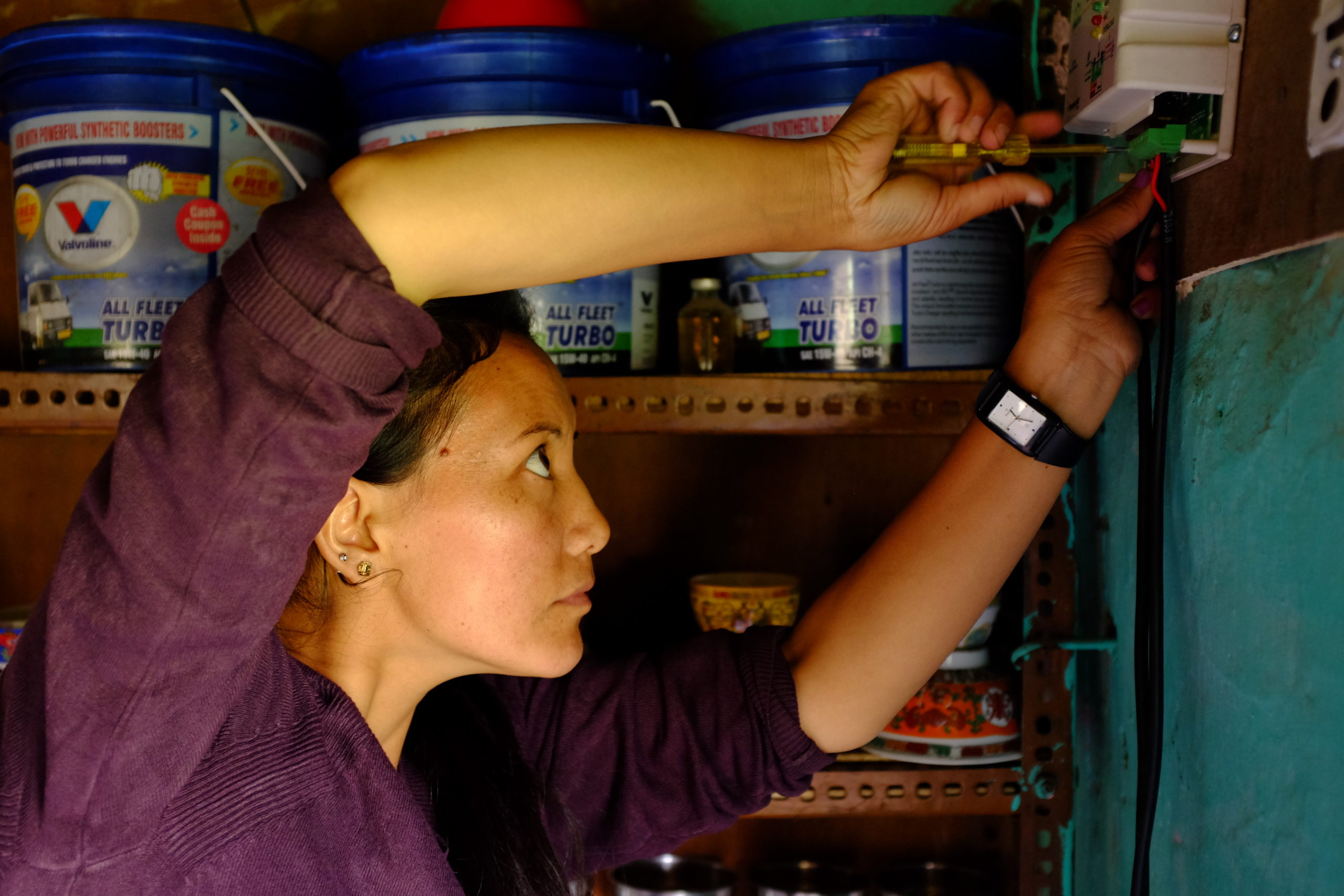 GHI make the solar panels and components themselves and train the locals how to repair and replace parts. (Credit: GHE)

TTP: How are the solar microgrids maintained?

JB: For every 10-15 villages we electrify, we set up a service centre run by an entrepreneur who maintains, repairs and expands the system. We also ask the village to open a community bank account, where they put in USD 2-3 every month per household. So there’s a pool of funds which accumulates over time, to ensure maintenance and repair costs are covered.

TTP: How will a planned 7,500 MW solar park in Ladakh affect the region and your company?

JB: The news of the park has been going around for the past couple of years. From some informal information we know that the areas that are going to be set up are nomadic areas. It’s good if the project is able to reduce energy issues in our country – as long as any infrastructure development doesn’t destroy the fragile ecosystem.

If the energy from the park can go to the villages that we have electrified, they can get more power for heavier appliances.

PL: The reason these villages do not have access to electricity is not because of energy deficiency, it’s because of the costs involved in putting up a transmission line where you have to cross mountain passes to reach them. For the government it’s simple finance: if they have to invest half a million US dollars to bring light to 30 households and 300 people it’s not cost-viable. 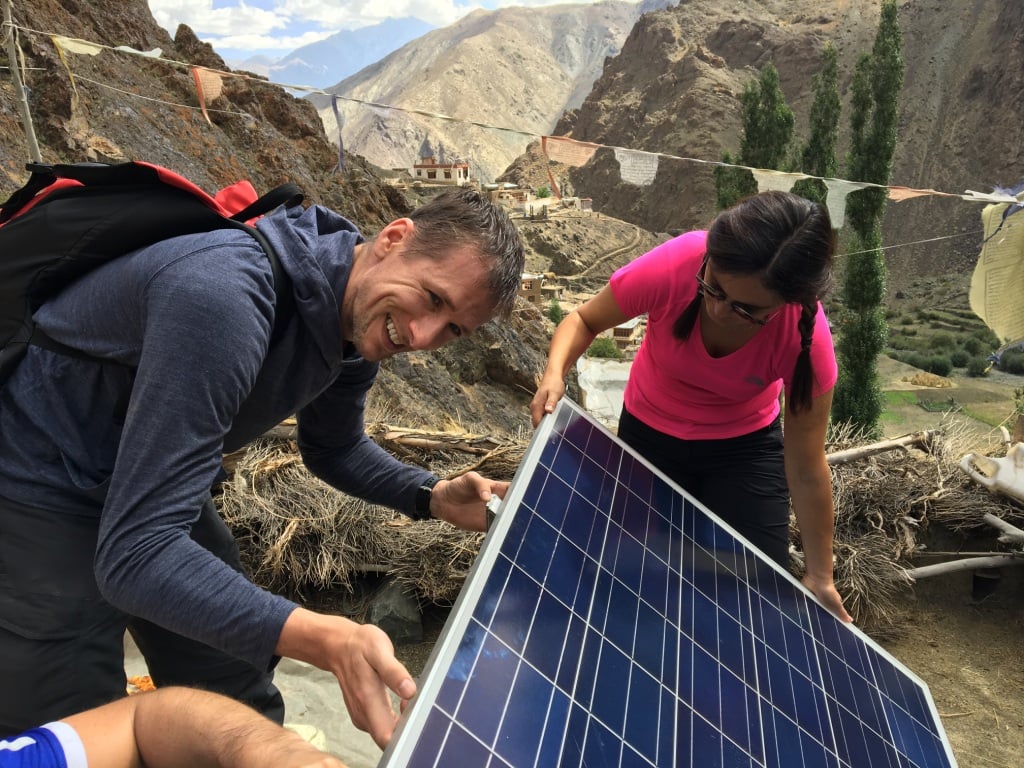 TTP: What changes in Ladakh have you noticed over the past seven years?

PL: Cloudbursts have become a frequent issue, of course. The streams in most of the villages have changed course. The snowfall pattern has also changed drastically – for a few years there isn’t much, then one year there’s a huge amount. In lakes and wetlands there has been a decrease in wildlife: you used to have black-necked cranes coming to Ladakh – that has decreased. And, due to lack of livelihoods, communities have been moving to cities.

Tourism has a serious impact, frankly. Since the movie 3 Idiots was released in 2009, Ladakh has become a famous travel destination. This has benefited communities but has not been managed in the way it should have been. There’s an issue with the water consumption, the groundwater level has gone down. 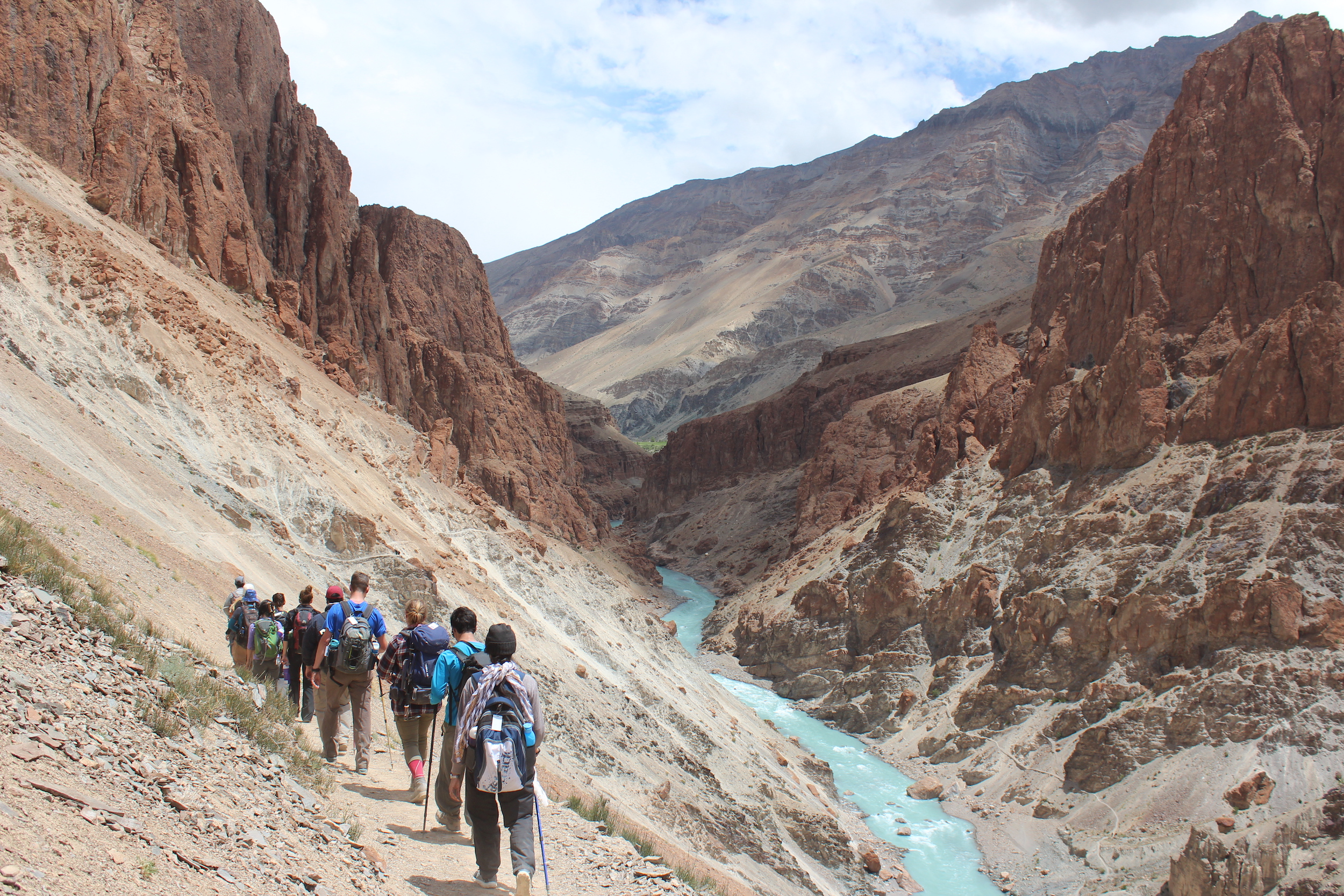 TTP: Your expeditions are carbon-negative. How do you achieve this?

JB: Because these areas are remote people use kerosene in winter for lighting and some heating. Electrification stops most of the carbon this emits – around 10,000 tonnes of carbon dioxide. For an expedition of 20 people, typically overall carbon emissions (including international flights, camping, lodging, everything) come to 55-60 tonnes. We are able to offset 110-115 tonnes through installing solar energy, which makes the expeditions carbon-negative.

TTP: How do you ensure community buy-in?

PL: Whatever infrastructure we set up, it’s not about parachuting into a village and giving them light. Every community in the mountains areas works very differently, so it’s very important to listen first and then design.

JB: You have to visit these communities, you have to tell them what the development model is, what technology they are getting. Once there is demand from the community, the reactions of the people when they see electric light for the first time are just priceless. It’s just pure joy and happiness. 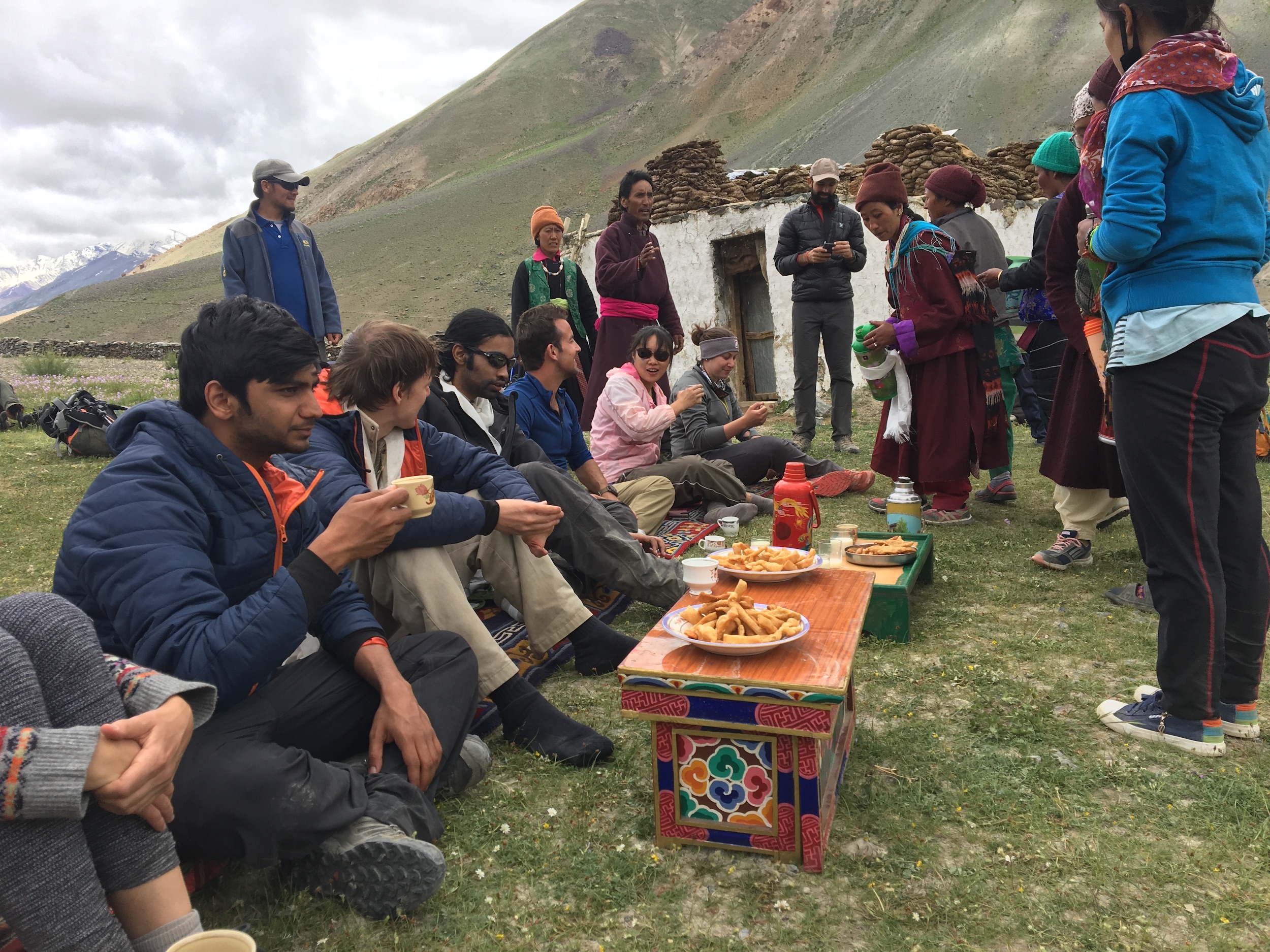 TTP: What are the limits to this sort of social impact initiative?

JB: Access to roads and cellular connectivity are problems that we as an organisation cannot solve. We work very much in partnership with the government. We ask the government its development agendas, we see where it is falling short, where we can plug in the gap with our resources and expertise. This ensures there’s no duplication.

TTP: What does winning the UN award mean for GHE – and what is next?

PL: It’s a pat on the back – people will take us more seriously and see that we mean business when we talk about mountain resilience.

TTP: What are the limits to this sort of social impact initiative?

JB: Access to roads and cellular connectivity are problems that we as an organisation cannot solve. We work very much in partnership with the government. We ask the government its development agendas, we see where it is falling short, where we can plug in the gap with our resources and expertise. This ensures there’s no duplication.

TTP: What does winning the UN award mean for GHE – and what is next?

PL: It’s a pat on the back – people will take us more seriously and see that we mean business when we talk about mountain resilience.

JB: We are discussing projects in Bhutan, Nepal, Madagascar, Sumatra, South Africa, east Africa, which would allow us to diversity the geography we work in. We want to see if what we’ve done in India holds true for other regions.