In April, construction was due to start on Mongolia’s largest hydropower plant to date. The Erdeneburen hydropower plant is planned to be built on the Khovd River in western Mongolia, in an ecologically sensitive area of a national park.

The project, which has a designed installed capacity of 90 MW and capacity to generate 366 million kWh a year, will supply power to five provinces. It aims to reduce Mongolia’s dependence on imported energy from China and Russia and promote economic development by enabling the mining of minerals and oil in the Great Lakes Depression of western Mongolia.

Mongolia’s Vision 2050 plan states that the country will protect freshwater ecosystems while constructing reservoirs to regulate the flow of all its major rivers. Few details are available on this nationwide masterplan for water infrastructure development, called the Blue Horse programme, although a call for consulting services in May 2019 referred to building at least 33 multipurpose dams and hydropower reservoirs on 12-13 rivers.

When complete, Erdeneburen will be Mongolia’s largest hydropower power plant at 90 MW – the biggest existing plant being 12 MW. However, there are several far larger projects planned under the Blue Horse in the Selenge river basin, such as the 315 MW Egiin Gol and 255 MW Shuren 255 plants. Erdeneburen is the only project that is known to have direct Chinese funding.

Construction is due to be carried out by state-owned Chinese engineering company PowerChina, and it is being financed through a USD 1 billion soft loan given by China in 2014. However, as of 2 June construction has not started: the relevant authorities in China are hesitating since local communities communicated their concerns via the embassy in Mongolia.

On 17 September 2021, Mongolia signed an engineering, procurement and construction contract with PowerChina for the Erdeneburen hydropower plant. A press release described this as “good news in overseas hydro market development in Outer Mongolia”. A joint venture between PowerChina, the Eleventh Hydropower Bureau and the Chengdu Institute, led by PowerChina, will carry out work on the project.

PowerChina boasts that it has experience in “record rapid dam construction in alpine region”, as the same unit that built the Taishir hydropower project (an 11 MW hydropower plant completed in 2008 in western Mongolia) will build Erdeneburen. Far from being reassuring,this is one of nomadic communities’ main worries after the experience of the Taishir project.

In 2017, our civil society organisation visited the Taishir dam. What we saw did not give us any confidence in the security and quality of the project: the concrete was cracked and an engineer with us pointed out a number of risks. 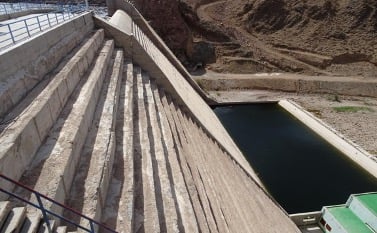 A photo of the Taishir hydropower project taken during a research trip in 2017, showing the poor condition of the concrete (Image © Paul Robinson)

In 2013, a report by experts described a leak in one section of the dam. Because of this, the Taishir reservoir is far large than intended, with a volume of 1 billion cubic metres, and stores a large proportion of the Zavkhan River’s flow. With the river’s flow being highly variable, and evaporation in the region high, the amount of water released downstream has dropped dramatically. This has caused loss of water for communities, as well as the drying up of pastures and habitat for biodiversity, triggering widespread migration from ancestral lands. The families who remain still experience hardships related to the dam.

Moreover, experts recommend that in seismically active alpine regions, “rapid” should not be a key feature of dam design and technologies used. Erdeneburen is more than eight times larger than Taishir, and rushed construction may cause even greater damage.

The Erdeneburen hydropower plant will be built in the ecologically sensitive area of Tsambagarav Uul National Park. Its reservoir will likely fragment habitat and could block the movement of the park’s population of snow leopards.

The Khovd River is critical for the Great Lakes Basin of western Mongolia. It empties into a 321,360-hectare Ramsar wetland, which includes the Khar-Us, Har and Durgun lakes. Several endemic fish species are found in the lakes as well as a large number of migratory waterbirds, including the globally threatened swan goose and vulnerable relict gull. Changing the natural character of a wetland is explicitly prohibited by the Ramsar Convention. Even relatively small modification to such sensitive landscapes can have huge repercussion: 10 years ago, the construction of the 12 MW Durgun hydropower plant halted the migration of endemic dwarf Altai osman and Altai osman fish between the lakes.

The government has set aside 28,000 hectares of land for the reservoir for the Erdeneburen project, which will flood the lush river basin territories of four settlements in three provinces. About 270 nomadic pastoralists and over a million livestock will be forced to seek new pastures. The degradation of pasture, due to increased pressure from displaced communities, loss of traditional livelihoods, and potential tribal conflicts over pasture and water access may lead to secondary negative impacts on the Ramsar wetlands. 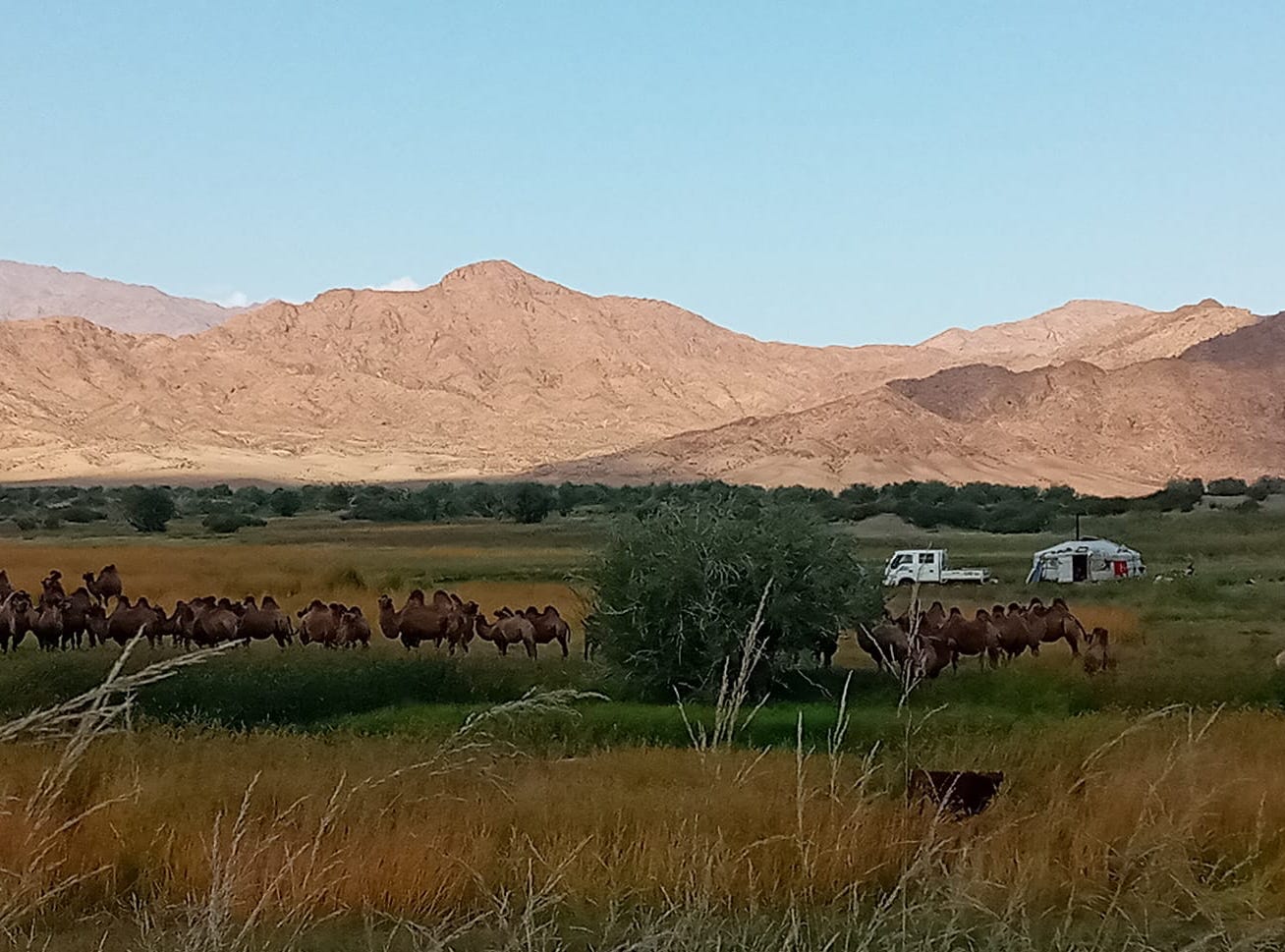 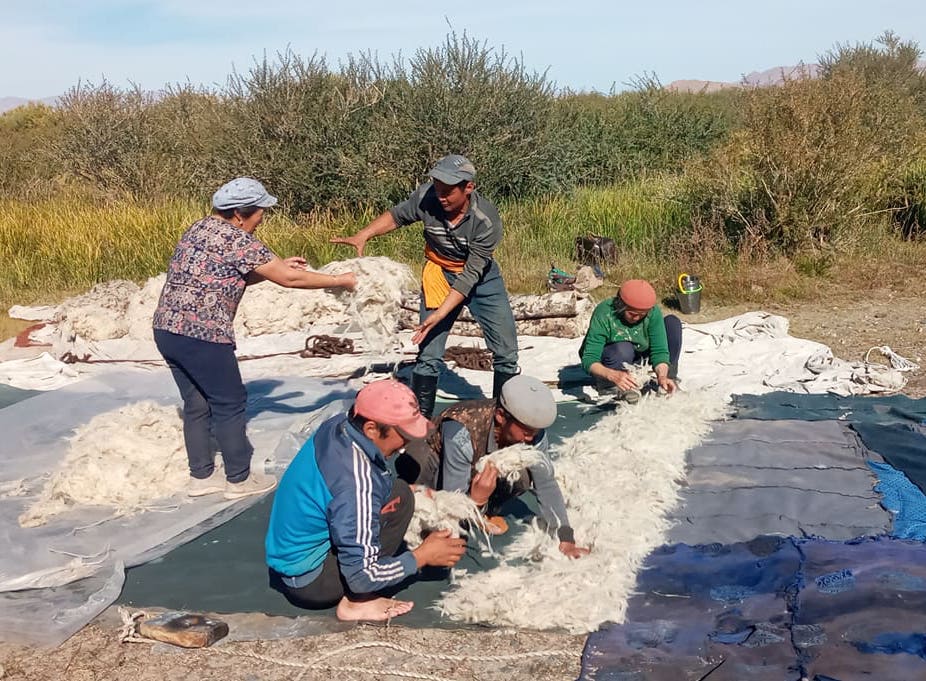 Pastoralist communities in Uliast Bagh. The best pastures of Uliast Bagh will be flooded by the Erdeneburen reservoir (Images © Degeree Studio)

The reservoir will flood the best pastures of Uliast Bagh, an administrative unit in Uvs province, displacing the entire community of 112 pastoralist households. In November 2021, herders traveled 1,540 km to the capital Ulaanbaatar to protest against the project, while others expressed their opposition on social media.

The response of the ruling Mongolian People’s Party was to announce that it will speed up the restoration of voided mining licences and large “development projects”, lifting all requirements for permitting – which includes discounting the opinion of local governments in the process of land allocation.

G Tsedenbal, the governor of Uliast Bagh, told me: “Regardless of what actions [the Mongolian government] may take, we will fight against this dam to the end. The resistance may take less desired forceful forms. We request your organisation to make our voices heard to the wider public. 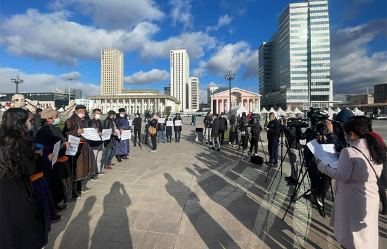 Herders from Uliast Bagh protest against the Erdeneburen hydropower project at the central Sukhbaatar Square in Ulaanbaatar in November 2021 (Image © Tsahiur.mn)

Project documents are not publicly disclosed on the official website for the Erdeneburen hydropower project. An incomplete environmental and social impact report disregards international best practice and calls for an assessment of impacts on migratory fish, wetlands and wildlife to be postponed until the project’s construction phase – when little can be done to mitigate them. Furthermore, affected pastoralist communities were not consulted for the report on where and how they will be resettled, or how their traditional livelihoods will be protected.

Ts Sosorbaram, a hydropower engineer and director of the company that wrote the report, has claimed that there will be no serious negative impact from Erdeneburen and said that herders protesting the dam “have neglected their citizenry responsibilities and are selfish”. He has also attacked the local government, stating “it is illegal for a bagh government to block projects and provide false information to citizens on a strategically important project”.

Erdeneburen project should not be in a Green Belt and Road

The Erdeneburen project is the largest Belt and Road undertaking in Mongolia. It will contradict the spirit and letter of the “Opinions on Jointly Promoting Green Development of the Belt and Road” issued in April by China.

In this document, four government departments pledge to “guide enterprises to… select suitable sites and routes at the design stage to reduce impact on nature reserves and environmentally sensitive and vulnerable areas”. The Erdeneburen dam, which threatens to degrade a wetland of continental importance, shows a disregard for BRI principles and guidance.

The document says the relevant bodies “will reinforce enterprises’ responsibility to carry out environmental protection with reference to generally accepted international norms and standards or higher Chinese standards”. The Erdeneburen project’s substandard and incomplete environmental and social impact violates international and Chinese standards. Furthermore, in China, such a project within a national park would be illegal, under country’s ecological redlines policy.

Hopefully, in the near future, China will host COP 15, the crucial Convention on Biological Diversity, and demonstrate the advantages of its “ecological civilization” and new “wetland protection law” as good examples for the world to learn from. Unfortunately, this is at odds with the current reality of the BRI in Mongolia, which threatens precious rivers and wetlands in a country where local regulations are weak and the government is hungry for infrastructure development at any cost.

BRI green guidelines must become reality to prevent this damage, starting with the Erdeneburen project. As Chinese investors consider communities’ concerns, we hope they will see that Erdeneburen does not align with their wider vision.

A wetland refuge on the Russia-Mongolia border

Opinion: Pakistan’s Diamer Bhasha dam is neither green nor cheap