When the Luang Prabang dam – 25-kilometres north of the city in northern Laos – began moving forward, Unesco expressed concern about the suitability and safety of the site in March. The Lao People’s Democratic Republic (PDR) government is now undertaking a Heritage Impact Assessment (HIA), triggered by Unesco.

“We kept insisting on this and eventually the Lao government agreed to do so. The assessment has been undertaken recently and it may take several months[…] Hopefully, it can finish by this year,” the source, who works on assessing the state of Unesco protection in the region, told The Third Pole.

On the banks of the Mekong, Luang Prabang was granted Unesco World Heritage status in 1996. Since then, a heavy influx of infrastructure and tourists has transformed the sleepy former capital into a regional travel hub. The culmination of the breakneck development is China’s USD 5.9 billion Boten-Vientiane Railway, which has already arrived at Luang Prabang from the south.

By signing the WHC, countries pledge “not to take any deliberate measures which might directly or indirectly damage the natural and cultural heritage” of a site and to “ensure the protection and conservation of their Outstanding Universal Value and other heritage values.”

When completed, the Luang Prabang dam, sponsored by PetroVietnam Power Corporation, will become the northernmost dam on the Mekong in the Lower Mekong Basin, below 11 dams on China’s section of the Mekong, known as the Lancang. 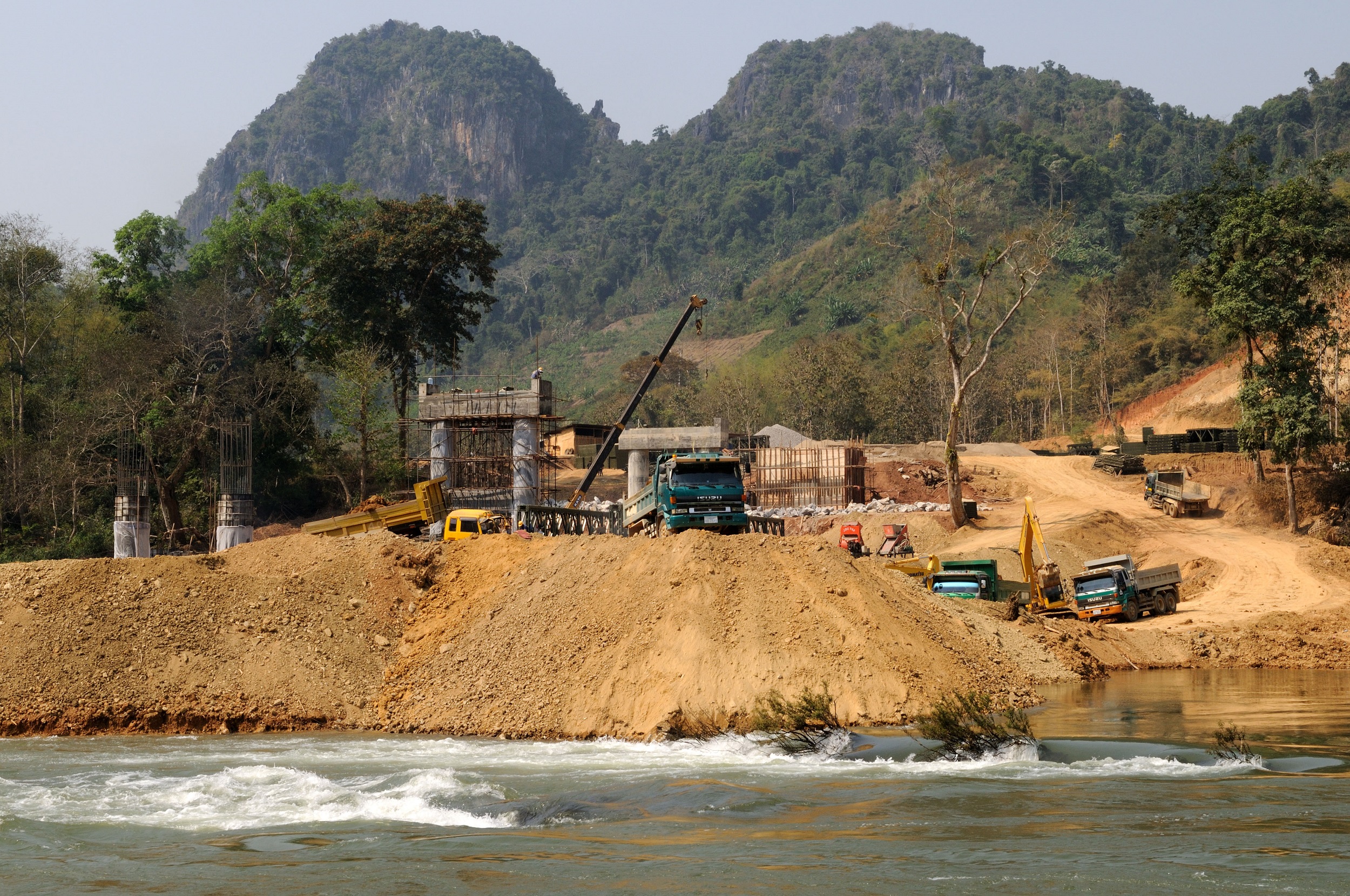 Hydroelectric dam being built by the Chinese on the Mekong River near Luang Prabang, Laos (Image: Alamy)

To the dam’s immediate south, the Mekong merges with the Nam Ou, a river featuring a cascade of seven hydropower dams built by PowerChina. Further south still, the Mekong meets the Xayaburi dam, the first completed dam on the Lower Mekong mainstream and a source of transboundary contention for more than a decade.

“The exact scope of impacts will not be known until the HIA is conducted, but various concerns have been raised by various experts so far. Potential risks on the World Heritage site need to be taken into account as any impacts on this the site could be irreversible,” the Unesco source said, later adding that the dam would likely have impacts on the destination’s Outstanding Universal Value given the information provided by the technical review of the project.

“These dams effectively encircle Luang Prabang’s urban area and I can see a nightmare scenario where dam operators aren’t talking to each other, a massive weather event pours through northern Laos and sudden dam releases from these dams cause an unnecessary flooding event around Luang Prabang,” says Brian Eyler, director of the Stimson Center’s Southeast Asia programme. “The Xayaburi dam would act like a plug in the bathtub, not allowing the water out to the downstream if its flood responses weren’t ready for those sudden upstream releases. It’s a complicated but possible scenario.”

The Lao government will need to increase coordination between the seven-dam cascade on the nearby Nam Ou, the Luang Prabang dam, dams on the Nam Khan River, and the Xayaburi dam downstream, Eyler says.

The Luang Prabang dam would be the first in the Lower Mekong Basin to encounter fluctuating water discharged from the 11 mainstream Chinese dams, including the massive 5,850 MW Nuozhadu dam.

Upstream dams slow water coming through the dam’s turbines and spillways, and affect the natural flow patterns of the Mekong. This effect erodes the productivity of fisheries and flooded agricultural plains, which should be flooding starting in mid-summer.

In line with plans to make Lao PDR the hydropower “battery” of Asia, the Luang Prabang hydropower project will have an installed capacity of 1,460 MW. This energy will largely be sold to Thailand from 2027 onwards.

In addition to the safety and preservation of the site, other sections of the WHC require information on what may impact the visual integrity of the World Heritage property or its immediate and wider setting.

There are few civil society groups in Lao PDR capable of stopping the hydropower dam’s construction. However, the dam has been criticised by environmental groups and the government in Thailand, which will feel the effects on its Mekong border with Laos and beyond.

“Surely effects for Thailand include fish loss, the fluctuations of dams cutting the river ecology, the unnatural water flow and the sediment loss until the water becomes blue,” says Niwat Roykaew of Thailand’s Chiang Khong Conservation Group, adding that it will impact riparian fishing communities.

Fisheries and naturally occurring food sources such as kai, a freshwater weed, have taken a hit from the spate of hydropower dams, changing the food sources and economies of local communities.

The only form of transboundary governance for mainstream Mekong dams is the Mekong River Commission (MRC). The MRC is an entirely advisory body, to which the member countries of Thailand, Vietnam, Laos and Cambodia submit projects for Procedures for Notification, Prior Consultation and Agreement (PNPCA).

The Luang Prabang hydropower dam is the fifth proposed for the MRC’s PNPCA, aimed at allowing concerned parties to consult on the specifics of the project. The PNPCA cannot approve or disapprove a proposed project.

The six-month PNPCA began in October 2019, but was delayed due to Covid-19. During the PNPCA wrap-up session in July 2020 for the Luang Prabang project, it was reported that Thailand, Cambodia and Vietnam requested Lao PDR to conduct “rigorous” transboundary impact assessments and enhance proposed measures to mitigate potential adverse impacts from the proposed dam.

A regional platform like the MRC, he added, does not have any obligation for the country members to consider the issue of World Heritage sites. He believes that Lao PDR will resolve this issue following the laws and obligations it has with Unesco.

Before the PNPCA was completed, Radio Free Asia reported that Lao authorities were already clearing land for the dam’s construction.

While the MRC has no power to stop the dam from being built, Thailand’s authorities have received pressure from environmental groups to not purchase power from the Luang Prabang dam and other proposed mainstream projects, such as the Sanakham, developed by Datang International Power Generation, only two kilometres from the Thai border.

“Since the Luang Prabang dam has no Chinese owners or chief construction companies participating in the project, in a sense the Thai-Vietnamese consortium has legitimised the Luang Prabang dam while delegitimising Chinese-owned mainstream dams,” Eyler says, adding that the market for Chinese-owned dams in Laos has become unpopular due to Thai-built dams with power markets in Thailand and a distaste from Vietnam in purchasing power from Chinese-built projects in Laos.

Thailand, which had a power reserve margin of 30% in 2020, will purchase power from the Luang Prabang dam via the state-run Electricity Generating Authority of Thailand (EGAT).

“These unfavourable conditions do not bode well for the future of Chinese-owned mainstream Mekong dams like Pak Beng, Pak Lay and Sanakham, which have yet to find power purchase agreements and as such cannot break ground,” Eyler says. “But it does in some ways, unfortunately, expedite processes around the Luang Prabang dam.”

Cambodians struggle to retain their identity after being displaced by dam

Interview: Pou Sothirak on protecting the Mekong and powering Cambodia

Can the countries of the Mekong pioneer a new model of cooperation?