At least four hydropower projects have failed to comply with new government requirements to maintain a minimum flow of water in the upper Ganga river basin, according to status report published in January by the Ministry of Water Resources, River Development and Ganga Rejuvenation, and the Upper Ganga Basin Organization under the Central Water Commission.

In October, 2018, the Ministry of Water Resources (MoWR) took an important step and set minimum environmental flows to be maintained by irrigation, hydropower and industrial projects operating in the upper Ganga basin between the glaciers at the source of the river and Haridwar, and the main stem of the Ganga up to Unnao in Uttar Pradesh.

Environment flows (also known as e-flows) set the minimum water flow needed to sustain healthy rivers and ecosystems. This is essential along the Ganga, where sections of the river now runs dry for part of the year due to widespread dam building and diversions, and what water remains is highly polluted.

See: No water for a clean Ganga

But experts say that the government standards for e-flows are too low to ensure healthy river system and have raised serious concerns over the transparency and accuracy of data collection and monitoring.

The 2020 report states that the Maneri Bhali Phase-II hydropower project, the Vishnuprayag and Srinagar hydro-electric projects as well as the Pashulok barrage in Uttarakhand state failed to meet the 15 December, 2019, deadline – which had been pushed back from October 2021.

thethirdpole.net filed a Right To Information request to obtain the report from the Central Water Commission, the designated custodian of the data, but was told the information was not available. We later found the report via google search techniques, such as using the report notification number. 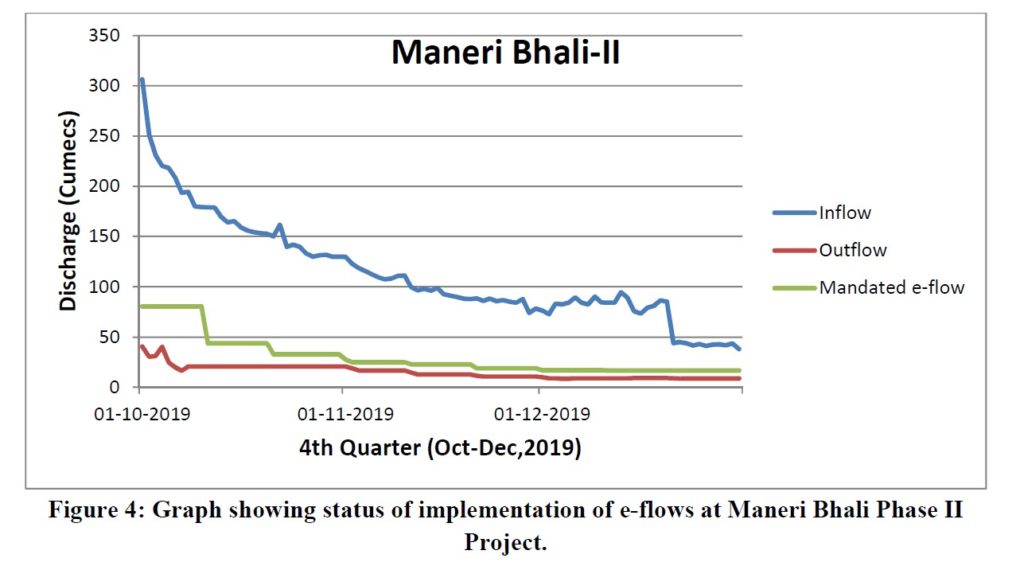 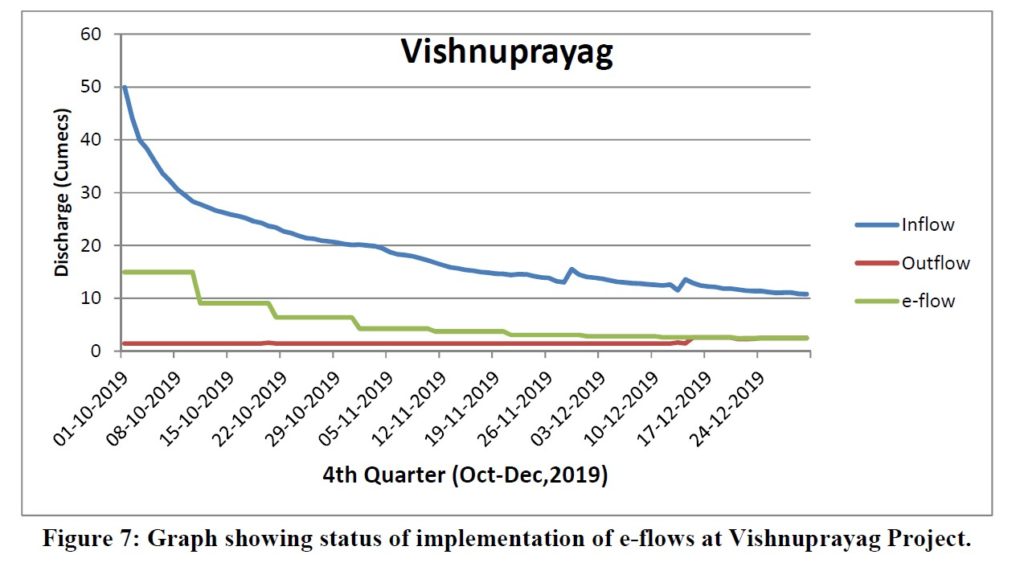 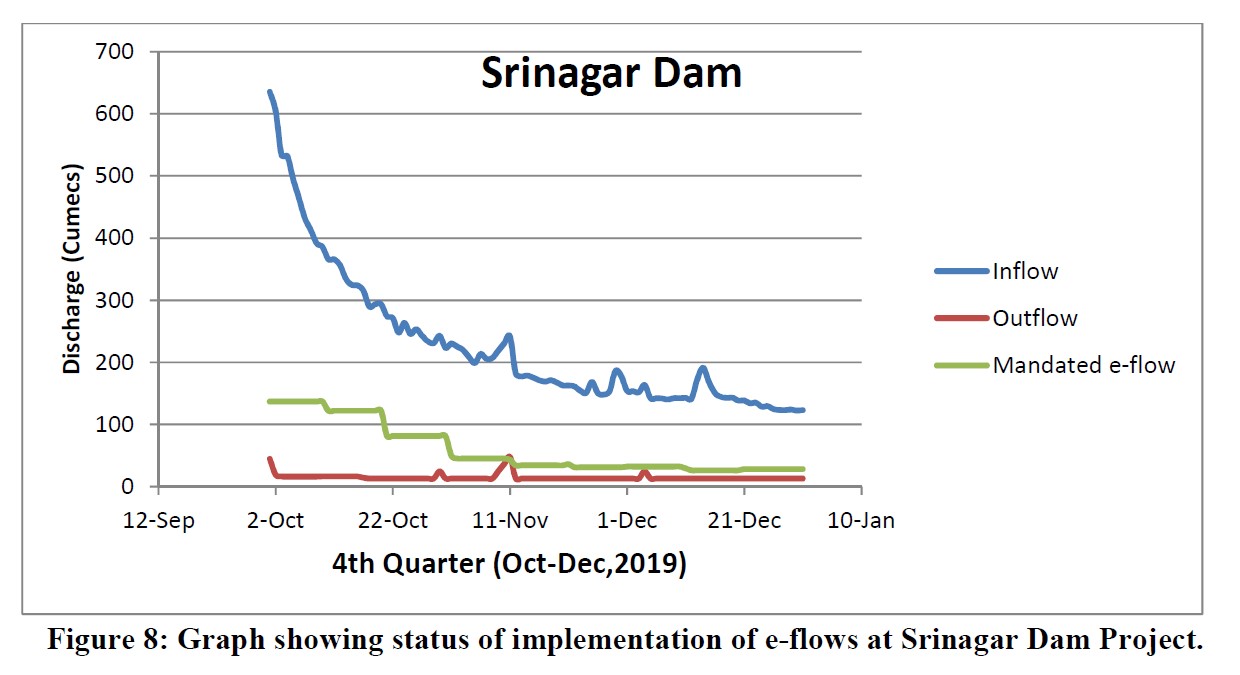 “It is concerning that these projects haven’t met environmental flow norms especially considering that the period [in question] is post-monsoon,” said Shripad Dharmadhikary, founder of Manthan Adhyayan Kendra, a research centre that analyses water and energy issues in India. This failure in compliance is all the more concerning given that maintaining minimum e-flows during the current quarter ( i.e. Jan-March) is all the more challenging given that flow in this quarter will be much lower until snow melt after April contributes a significant amount of water to the river.

In addition to the four projects that have been categorised as “non-compliant”, the report states that the Maneri Bhali Phase-I project also failed to maintain minimum e-flows for a few days in October, 2019, and that Tehri and Kanpur barrage are not providing data on the mandated hourly basis. When there are gaps like this, “how can you conclude that these projects are compliant?” said Himanshu Thakkar, coordinator of the South Asia Network on Dams, Rivers and People.

The report also points out that only four of the 11 projects being monitored have installed automatic data systems to monitor e-flows. The original notification clearly stated that “the concerned project developers or authorities will have to install automatic data acquisition and data transmission facilities at appropriate locations at project sites within six months.” And so, this too is a lapse.

Further doubts have arisen over compliance because there has been no independent verification of water flow. The status report is entirely based on a self-reporting mechanism.

There are also concerns over factual errors in the report, which throw the findings further into doubt. Pointing to a description of “Ganga physiography” provided in the report, Thakkar noted that parts of Jharkhand and Chattisgarh also fall within the Ganga basin but the report only mentions Uttarakhand, Uttar Pradesh, Madhya Pradesh, Bihar, Rajasthan, West Bengal, Haryana, Himachal Pradesh and Delhi. “Also, the map [image above] shows Koteshwar [dam] as being upstream of Tehri but Koteshwar is downstream of Tehri,” Thakkar said. “These are glaring mistakes,” he added.

E-flow requirements are important because they mandate that rivers need a minimum flow – after water withdrawal for urban, agricultural and industrial purposes – to support river ecosystems and aquatic life.

One of the basic tenets behind this is that rivers are not mere water pipes but living ecosystems that carry silt and other important nutrients – as well as supporting aquatic life. Jagdish Krishnaswamy, senior fellow at the Suri Sehgal Centre for Biodiversity and Conservation, Ashoka Trust for Research in Ecology and the Environment, said that because the flow of the Ganga into the Bay of Bengal has reduced over the last few decades “sediment deposition in the delta has declined and this – combined with other impacts of climate change – is leading to the sinking of the delta.”

And so, establishing minimum water flows are a legal fix to restoring ecological balance.

But what’s lacking in current government policy is a focus on the larger ecological importance of rivers. “E-flow is not a reference only to water…it means everything that flows in rivers like silt, nutrients, biota,” Thakkar explained. E-flow norms, therefore, ought to address the larger goals of e-flow, which are to maintain healthy river systems for humans and ecosystems.

Experts have also raised questions about whether the minimum standards are based on scientific assessments. “The notification does not mention how the norms were calculated… there’s no transparency,” Thakkar said. Dharmadhikary pointed out that “a thumb rule” rather than location and river-specific studies was used as the basis for determining e-flow norms. And, given the lack of evidence to suggest otherwise, the norms seem arbitrary.

Current standards “are so low on the main stem of the Ganga that there was never any doubt” that projects would achieve compliance, said Dharmadhikary.

What about other parts of the Ganga and rivers in India?

Environmentalists are calling for e-flow regulations to be extended to the rest of the Ganga and other rivers in India.  “You should keep in mind that this is only one stretch of the Ganga,” Thakkar said, noting that this effectively means that we do not know about e-flow on the remaining sections of the Ganga downstream or other tributaries.

Minimum e-flow norms have also not been mandated for rivers in peninsular India, where many of these rivers are drying up before they reach the sea.

“For many years, the waters of the Kaveri [flowing through Karnataka and Tamil Nadu in southern India] don’t reach the sea anymore,” said K. J. Joy, member of the steering committee for the Forum for Policy Dialogue on Water Conflicts in India. “The Kaveri is an over-allocated river and e-flow is treated as residual,” he added, noting that currently, less than 1% of the Kaveri’s water is being allocated towards e-flow.

Raj Bhagat Palanichamy, a GIS and remote sensing analyst with World Resources Institute, India, said that rivers like Palar and Ponnaiyar in Tamil Nadu flow only if there is heavy rainfall. “In fact, a small section of the Ponnaiyar river flows only because of sewage inflow from Bangalore.” The Sabarmati, one of India’s major-west flowing rivers flowing through Rajasthan and Gujarat, also dries up before reaching the sea at some points during the year, Palanichamy said.

And while India’s 2012 National Water Policy states that “a portion of river flows should be kept aside to meet ecological needs,” there are no specific guidelines regarding what such minimum flow should be along the country’s various riverine ecosystems.

The lack of transparency over how environmental flow standards are being set and monitored along this stretch of the Ganga does not bode well for the future of India’s rivers.