Just a few weeks ahead of COP26, China, the world’s biggest public financier of coal, announced that it will end investments in overseas coal projects. It raised hope in countries that want to make low-carbon energy plans and panic among those who feel they cannot do without coal.

The announcement could mean the cancellation of over 40 gigawatts (GW) of pipeline projects in 20 countries, even though China has not invested in any new coal projects since the beginning of 2021.

Pakistan is one of the Belt and Road Initiative countries where coal formed a major part of energy projects under the China-Pakistan Economic Corridor (CPEC).

Michael Kugelman, deputy director for the Asia programme at US-based think-tank the Wilson Center, said China’s exit from coal is a “blessing in disguise” with opportunities for “bilateral clean energy cooperation” a clear win for the environment.

Even Muhammad Badar-ul-Munir, the chief executive of the 100 MW Quaid-e-Azam Solar Power Pvt Ltd (QASPL) plant, said the end of China’s attachment to overseas coal projects is a “great piece of news”, as it may force the government of Pakistan to focus on the much-ignored area of solar power.

Back in 2014, QASPL made headlines. As part of the China-backed 1,000 MW Quaid-e-Azam Solar Park in Punjab province, the company set up the first 100 MW of electricity in just under a year.

“For the last five years, work on this first energy project under the China-Pakistan Economic Corridor (CPEC) has been at a standstill, despite the infrastructure in place for the remaining 900 MW,” Badar-ul-Munir told The Third Pole.

He added that now is a good time for the state to pursue new investment: currently solar energy in Pakistan is sold at USD 0.037 per kilowatt-hour (kWh), compared with the USD 0.14/kWh tariff that the government is stuck with buying from solar projects set up in 2014-2016 under a 25-year agreement.

The policies behind the talk

“We believe green is the way to go,” Asad Umar, Pakistan’s federal minister for planning, development and special initiatives, told The Third Pole. “We have always been very critical of the imported coal plants that we inherited from the previous government,” he said.

“Even before the recent announcement by China, greening the future development pathway was practically in motion. We had shelved two negotiated imported 2,400 MW coal projects under CPEC,” Malik Amin Aslam, the federal minister for climate change, added.

But the clean energy source Badar-ul-Munir has in mind is different from the one the government has its sights set on: hydropower.

Umar, who also heads several CPEC committees, said the “big dams that are being set up will have massive hydel energy capacity” and that his government favours them.

Yet this in no way means the government is completely washing its hands of dirty fuel.

The coal projects in the pipeline under CPEC “will continue”, according to Umar. However, all “future thermal projects will be using the indigenous coal from Tharparkar only”, he said, adding this was reflected in the recently approved 10-year energy roadmap.

“The renewable energy share in the total mix in 2030 will be 60%, a pledge made earlier by Prime Minister Imran Khan at the Climate Ambition Summit 2020,” said Umar. But Haneea Isaad, an energy researcher with US think-tank the Institute for Energy Economics and Financial Analysis (IEEFA), found that the renewable energy in the overall energy mix is skewed towards hydropower, with 46% allocated to the latter by 2030 and just 16% to solar and wind.

“It’s a blatant violation of the targets set in the Alternative and Renewable Energy Policy, 2019, which states that renewable energy, excluding hydropower, is to have a 30% share [including solar, wind, bagasse, geothermal and biomass] in the generation mix by 2030,” said Isaad.

Over-reliance on a single source of power, Isaad said, could threaten the reliability of power availability in the country. “Fuel diversity is extremely important for energy security in times of climate crises that are upon us,” she said.

If developing countries are to move away from coal, developed countries need to come forward, said Aslam. “Our major energy plans are [based] on renewables and we need the world to step up and assist countries like Pakistan that are committed to a clean energy transition,” he told The Third Pole.

The good news is that the world’s top two polluters have come forward to show support.

Still, Pakistan hopes for “cooperation with the Chinese [for] expertise” in exploring gasification and liquefaction options to move away from coal combustion, said Aslam.

What is coal gasification?

The chemical transformation of coal into synthetic natural gas. It can reduce the need for imported liquefied natural gas, so is attractive from an economic and energy-security perspective. It can also help to address local pollution problems.

Muhammad Mustafa Amjad, a representative of the Pakistan Renewable Energy Coalition, a group dedicated to a cleaner energy transition in Pakistan, is not convinced coal gasification is a good idea. “The options are not only economically prohibitive but would also lead to higher emissions than burning coal directly,” he told The Third Pole.

Instead, he said: “Pakistan can ask for technology transfer, increased financing for renewable energy and other nature-based solutions as well as investments in grid upgradation so that more renewables can be incorporated into the energy mix.” This, Amjad said, should be echoed in Pakistan’s revised Nationally Determined Contributions (renewed plans to cut carbon emissions) and be reiterated at COP26.

With China’s coal exit, however, Thar coal may get a new impetus. Of the eight coal plants in Pakistan’s pipeline today (see table above), six are in Tharparkar, in Sindh province. Of these, five are at various stages of completion with the sixth, Oracle, only on paper. The Jamshoro, Lucky Electric and Siddiqsons plants in Thar do not fall under CPEC.

Not only did the two companies (part of CPEC) win the race, the SECMC especially will continue to play an important role in Pakistan’s future energy plans.

Syed Abul Fazal Rizvi, the former head of the SECMC, the first to mine coal in Thar, said he does not think Pakistan will be rid of coal any time soon. He predicted that with China out of the picture, some of the plants using imported fuel may have to make their plants compatible to be able to make the switch to locally available lignite.

With a current annual mining capacity of 3.8 million tonnes, the SECMC provides coal to not just the EPTL, but will be catering to the coal power plants that Pakistan had set out to build, or are in the pipeline.

“The under-construction coal plants have state guarantees for up to 30 years behind their power purchase agreements which cannot be renegotiated,” explained Aslam.

“Decommissioning them would entail heavy financial costs, which the government cannot afford,” he added. 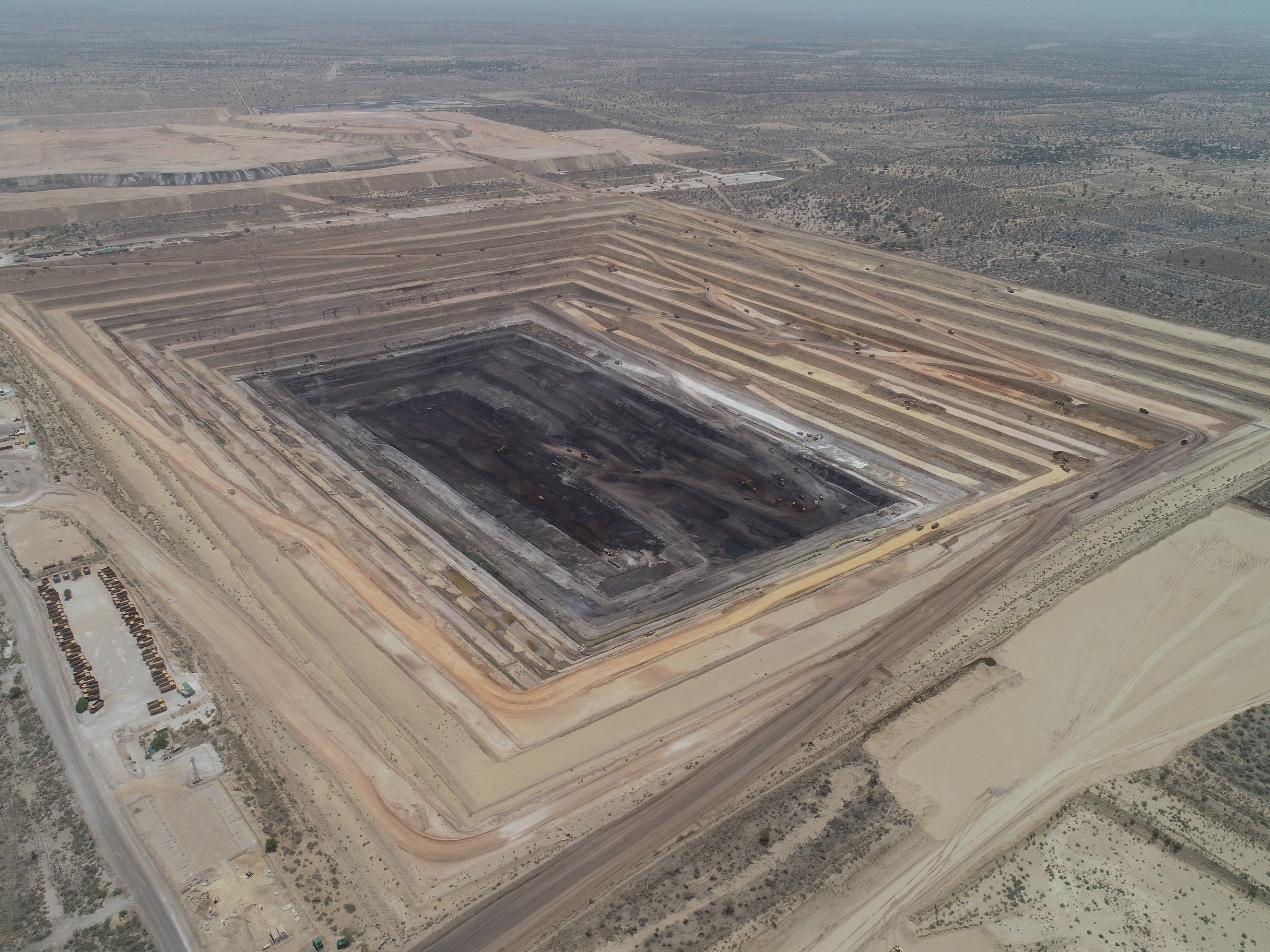 The proponents of fossil fuel continue to argue that Pakistan needs a consistent power source in the absence of cheap battery storage. And there are other underlying reasons why Pakistan will still use polluting fossil fuels, said Rizvi.

“Thar coal is indigenous, abundant and has a low forex requirement. The 8,000 MW of coal and 5,000 MW liquefied natural gas (LNG)-based power plants with long-term agreements to purchase power from fossil fuel-based power plants will continue to run to provide the much-needed base load for the country,” he said.

“Coal prices are at an all-time high and imported coal at Karachi port today is selling for USD 218 per tonne. Compare it to the indigenous Thar coal which is being sold at approximately USD 61 per tonne!” said Rizvi.

Currently, SECMC is the only mining company in Tharparkar’s Block 2, spread over 100 square kilometres, with the exploitable reserves of up to 1.56 billion tonnes – “good for 5,000 MWs for the next 50 years” according to Rizvi.

He conceded that lignite has half the heating value of imported coal, so power plants using the latter would need almost double the quantity of Thar coal. “Even then it would be cheaper to run the plants using local coal,” he said.

The rise in the price of imported coal, according to Rizvi, was due to “a big drop in global mining during the pandemic, environmental restrictions, soaring prices of LNG and RFO [residual fuel oil is a type of low-grade fuel oil], coupled with high sea freight in the post-pandemic economic revival.”

Given the incredible price surge of gas and coal supplies, Isaad said the time was right for Pakistan to “invest in adequate renewable energy and a storage-based back-up”. But she also admitted: “Pakistan’s energy transition or a move away from fossil fuel-based power will not happen overnight; it will have to be a carefully planned and a well thought-out phase out.”

Greener CPEC a must for Pakistan’s pandemic recovery