By 2050 about two-thirds of the human population — that is six out of the world’s nine billion people — will be living in cities. Given that 55% of people already live in cities, this should not come as a surprise. The only question is whether this urbanisation will be seen as a problem, or as an opportunity. For a few people, the future of the city may determine the success or failure of humanity’s ability to deal with the climate crisis.

Cities occupy only 2% of land but they produce about 70% of global waste, emit nearly 70% of greenhouse emissions and consume more than 60 % of energy. While more and more infrastructure will be built in the coming decades — with about 75% of infrastructure that is expected to be in place by 2050 is yet to be built — there is ample opportunity to begin with the housing sector. 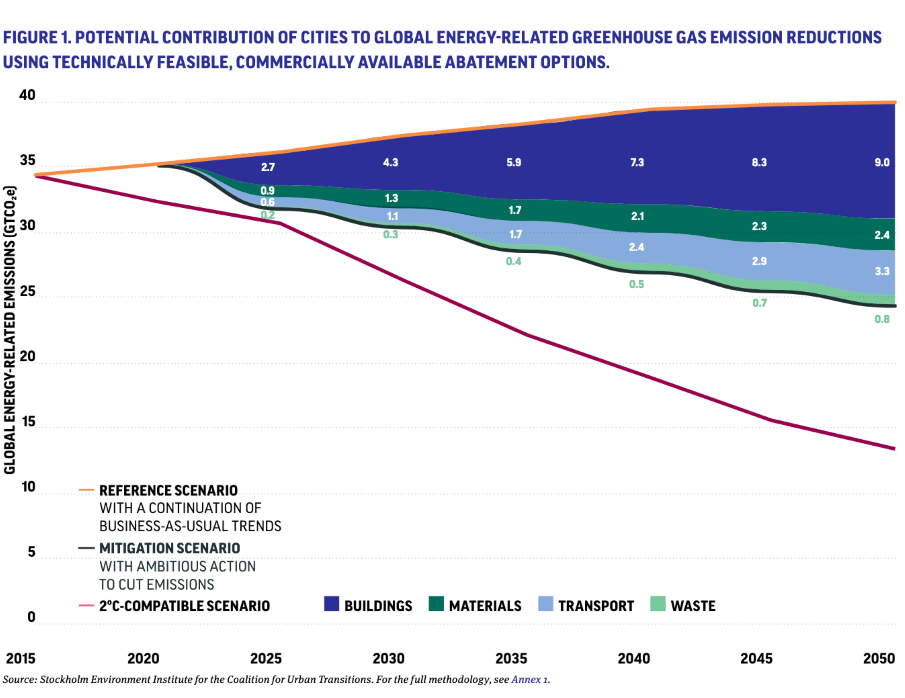 “We don’t need nudges and tweaks but transformation on a massive scale, starting immediately,” says Aniruddha Dasgupta from the World Resources Institute.

Even as one billion people live in informal settlements globally, the housing sector uses 40% of the planet’s total resources and represents over one-third of total greenhouse emissions.

An example of innovation

Experts who gathered at Stanford University in California on the first week of September to discuss the planet’s health urged policymakers to focus on cities as an opportunity to kick off action. Several innovations around housing are underway globally, with the tiny house designed by the Yale Centre for Ecosystems in Architecture serving as one example.

“These new innovations can be a model that would revolutionise the world’s urban housing systems as the current housing systems consume so many resources. Measuring just about 22 square metres, this structure is a type of ‘tiny house’ which traditionally has one room with a loft or pull-out bed, complete with hidden storage, and condensed amenities, such as a kitchen, that maximises the space available to live in,” said Dyson.

This is just one of many innovative ideas that are being developed globally. This week, the Urban Opportunity report released by Coalition for Urban Transitions has said that it is possible to cut 90% of emissions from cities using currently available technologies and practices in buildings, transport, materials efficiency and waste.

“Implementing low-carbon measures in cities could support 87 million jobs by 2030 in sectors such as clean energy and public transport,” the report said.

Particularly in South Asia, cities are growing outward quite unlike the cities in North America, Europe and East Asia – a reality which requires more resources. These cities have fewer financial resources to manage their growth but are expected to hold more than 2 billion additional people by 2050.

“As we know that just three countries—India, China and Nigeria—are expected to account for 35 percent of the global urban population growth between 2018 and 2050. As these cities grow in population, continuing their unwieldy expansion outward could push them into crises as outward expansions are often challenged by distorted land markets, deficient services in growing areas and disjointed informal expansion,” said Jilian Du at the World Resources Institute.

It is estimated that reduction of carbon emissions would require an investment of USD 1.8 trillion (approximately 2% of global GDP) per year, which would generate annual returns worth USD 2.8 trillion annually in 2030, and USD 7.0 trillion in 2050 based on cost savings alone.

“Many of these low-carbon measures would pay for themselves in less than five years, including more efficient lighting, electric vehicles, improved freight logistics and improved solid waste management,” added the report. About 70% of greenhouse gases emissions come from the cities and more than 60 % of energy consumed.

While housing is a major issue, another is urban transportation. As most of the human population will be living in cities, urban mobility plays a key role. To reduce greenhouse gas emissions the most effective way is to network every moving object and use it as efficiently as possible.

“From Henry Ford to now, nothing much has changed in our urban mobility model. But in the age of the internet, every moving thing will be networked. Innovation to use it can make cities better and sustainable. So, mobility represents the third stage of the internet. The networked mobility will change urban transportation, so we need to enhance it. Uber is an example and much more is possible,” said John Rossant, Founder and Chairman of New Cities.

What about food then? More agricultural lands will be converted to build cities and more will be used to feed humans in the cities. A study conducted by the UN’s Food and Agriculture Organisation (FAO) in 2013 had estimated that total annual emissions from agriculture were about 14.5 % of all human emissions. The beef industry was responsible for 41% of this.

“Building from an FAO projection, we estimated that global demand for beef and other ruminant meats could grow by 88% between 2010 and 2050, putting enormous pressure on forests, biodiversity and the climate. Even after accounting for continued improvements in beef production efficiency, pastureland could still expand by roughly 400 million hectares, an area of land larger than the size of India, to meet growing demand,” wrote Richard Waite at the World Resources Institute.

What if we consume more plants and less meat?

One encouraging solution has come from Impossible Foods—a food company based in the United States, which is already producing ‘meat’ from plants and has plant-based fish on the cards.

“Using animals to make meat is a prehistoric and destructive technology. Animal agriculture occupies almost half the land on earth, consumes a quarter of our freshwater and destroys our ecosystems. So we’re doing something about it: we’re making meat using plants, so that we never have to use animals again. That way, we can eat all the meat we want, for as long as we want. And save the best planet in the known universe. Making previously thought impossible ideas possible can feed future cities sustainably,” said Ranjani Varadan, Vice- President of Impossible Foods.

Slums as an inspiration

Slums are a part of cities, but are always considered a problem by urban planners and policy makers, especially those in developing countries where megacities are in formation.

While two-thirds of humanity will be living in cities, one third will be in slums. According to World Bank data, 130 million South Asians live in slums or informal settlements. From 2000 to 2011 the number of people in South Asian cities increased by 130 million – more than the entire population of Japan.

“Slums don’t have to be a glitch, or a problem. They can be an asset. By considering urban living at the human scale, and from a bird’s eye view, we can redesign slums as more liveable, lightweight and adaptive places. Places that are a better fit for the modern world; places in which a diverse group of citizens cannot just survive, but thrive,” said Jonathan Hursh, Founder and Executive Producer at Utopia.

The world is changing. Tokyo, London and New York won’t be megacities in the future. The ones growing rapidly are in Asia and Africa: Lagos in Nigeria with 88 million, Dhaka with 76 million, and Kinshasa with 63 million. The large slums in these cities should be taken as part of the solution rather than the problem.

“City leaders across Asia and Africa are looking for solutions for their cities. What if they found them in the most unlikely of places: their slums?” he asked.

“We can build the slums as micro cities and declare them as special demonstration zones where they will become testbeds for more agile approaches to healthcare, governance, education, energy provision and every other aspect of city life. This is similar to the special economic zones which have become an innovation lab to test new technology and governance in several countries in Asia and Africa,” added Hursh.

Sustainable coffee culture in the Mekong