In the next two years, Bhutan plans to harness 300 megawatts of solar energy, Minister for Economic Affairs Lokhnath Sharma has told The Third Pole. Currently, the country’s installed renewables capacity (excluding hydropower) is about 9 MW.

The government has identified seven sites across the country to install solar farms, at a cost of around 21.6 billion Bhutanese ngultrum (about USD 300 million). It hopes that the Asian Development Bank (ADB) will provide funding and technical support, and is exploring funding with the World Bank and European Investment Bank, Sharma said.

The first project due to be constructed is a 17.38 MW solar plant in Wangduephodrang district, the funding of which is being supported by the Asian Development Bank. Sharma said the ADB has instructed the ministry to choose the three best sites to begin installing solar farms. “We are currently doing that and if we excel, they will fund the remaining four sites too.”

The Himalayan country currently depends on hydropower for nearly all its electricity generation. In winter when water levels in reservoirs drop, supply cannot meet demand: last year the country required about 450 MW but generation dipped to about 400 MW, Chhewang Rinzin, managing director of the Druk Green Power Corporation Limited, told this correspondent in an earlier interview. 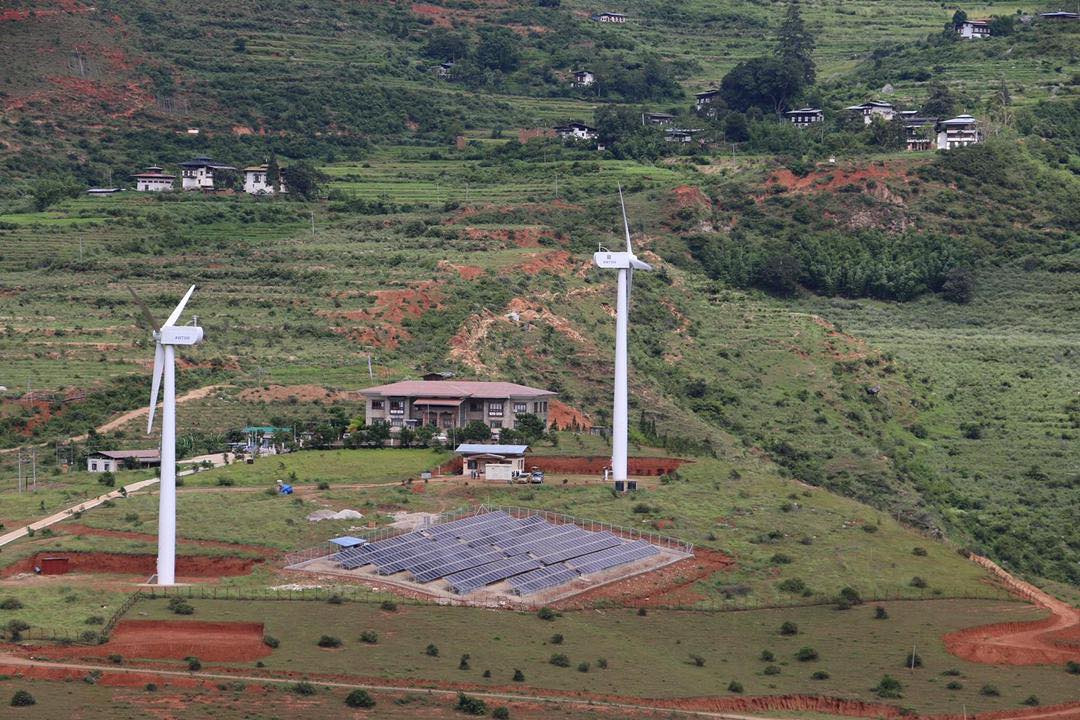 With several new power-intensive and IT industries proposed to be established, Bhutan’s domestic demand for energy is projected to more than double in the next two years, and its winter energy deficit will worsen, officials at the Department of Industry told The Third Pole. With hydropower unable to fill the gap, in recent years Bhutan has been looking to diversify its energy sources.

Solar power is seen as a quick way to meet the growing demand for electricity. The government plans to complete the country’s first large solar plant, the 17 MW project in Sephu, Wangduephodrang, within 18 months from when it starts construction later this year.

Phuntsho Namgyel, director of the Department of Renewable Energy (DRE), said that solar plants can be commissioned and constructed within a short period of time – especially compared with the years or even decades it can take to develop hydropower.

Improvements in the technology also mean it is now cheaper and more reliable. “Today solar energy has reached grid parity with hydropower, meaning the per-unit cost of electricity is almost equal to that of hydro,” Namgyel said.

The DRE estimates that the price of electricity from the Sephu plant will be around BTN 3 a unit. This is lower than the price it charges to export electricity to India from the 720 MW Mangdechhu hydroelectric project, which is BTN 4.2 a unit.

Globally, the cost of developing solar energy has decreased significantly in the past decade. According to the International Renewable Energy Agency (IRENA), the price of solar panels has dropped by almost 90% since 2009.

Previous obstacles have been overcome

A previous obstacle to rolling out solar power in the Himalayan country has been a lack of skilled workers and problems importing materials – particularly during the pandemic. However, following the relaxation of Covid-19 restrictions, many of these issues have been resolved, Phuntsho Namgyel claimed.

A few years ago, solar panels could not generate electricity during cloudy days. Now, Namgyel explained, they can absorb ultra-violet rays even when the sun is not shining, converting almost 22% of sunlight compared with 17% a few years ago.

Solar is also easy to develop, Namgyel added. Unlike hydropower, “there is no question of geological surprises” as solar does not require tunnelling, subsurface digging and does not directly pollute or damage the environment.

Bhutan’s first elected government announced a plan to export 10,000 MW of power by 2020, and India agreed to buy this amount in 2012. Unfortunately, almost all of the projects, including the biggest one in the country, the 1,200 MW Punatsangchhu-I one are deeply delayed, with the Bhutan Electricity Authority stating in its Annual Report of 2019-20 that it “had also extended construction license period for almost all of the Projects due to poor geological conditions and administrative reasons”.

A big remaining challenge for the tiny landlocked country is the need for huge tracts of land to install solar panels. For instance, the solar plant in Sephu will require around 26 hectares of land, which is nearly 50 football pitches.

Not everyone The Third Pole spoke with was convinced by the plans. Yeshey Dorji, an environmental activist, pointed out that the need to store electricity in batteries comes with its own environmental cost. Currently, batteries are often disposed of unsafely at the end of their useful life.

“I believe that electricity generated by hydro energy is still more efficient, cheaper and cleaner than harnessing the energy from the sun,” said Dorji. Pointing out that damage has already been done to the Wangchu river basin, he said a storage dam on the Wangchu river would be a better way to meet the winter electricity shortfall.

Unlike wind and hydropower, solar panels do not require particular conditions to work and can be installed on the rooftops of houses across the country. The Ministry of Economic Affairs is carrying out a pilot project to install solar panels on 300 homes, enabling them to sell surplus power to the country’s grid.

Phuntsho Namgyel said households with solar panels can become “prosumers”, meaning they can be both the producer and consumer of energy.

However, officials from the Department of Renewable Energy said this will require changing policies and regulations. A draft regulatory framework has already been prepared and the 2013 Alternative Renewable Energy Policy revised. This will contain the principles that determine tariffs for selling power to the grid. Eventually, though, the Bhutan Electricity Authority will formulate the national regulation to determine the tariff.

Once the new feed-in tariff regulation is in place and energy from solar is fed into the grid, excess power can be sold to India and imports can be minimised. Currently, Lokhnath Sharma said, the price of imported electricity is extremely volatile, varying from BTN 2 per unit to as high as BTN 10 per unit.

In 2020, hydropower plants generated more than 11,000 million kWh of electricity, according to the records of utility company the Druk Green Power Corporation. In the coming years, Bhutan will continue to develop hydropower, Sharma said. This means that even the ramped-up 300 MW solar target will still be a tiny proportion of the overall energy mix.

Sharma said there is an urgent need to change the way hydropower projects are developed, as they often result in huge cost escalations and delays that do not make economic sense.

The minister also stressed the need for a common regional grid so that Bhutan can sell power to its neighbours. To enable this, there needs to be a new or revised model of charging for power to keep electricity prices competitive, the minister said.

As Bhutan adapts to changing market dynamics and moves to diversify its energy mix, Sharma said the government is also considering green hydrogen as a potential area of investment. The fuel can be used in the transportation sector to reduce fossil fuel dependency. Before the pandemic, Bhutan imported fossil fuel worth over BTN 10 billion a year on an average, according to the Ministry of Finance.

While extracting hydrogen from water is an energy-intensive process, in Bhutan the energy could come from renewable energy and thus produce green hydrogen.

Bhutan looks beyond hydropower to solar

Will Bhutan remain the climate darling of the world?