Bangladesh’s minister of power, energy and mineral resources, Nasrul Hamid, surprised energy watchers recently when he said the country is planning to “review” all but three of 29 planned coal plants.

“We are keeping the three coal-fired power plants that are under construction. At present, we are aiming for [40 to 41 gigawatts of total generation capacity], where only 5 GW is coal based,” said Hamid during a webinar run by the Centre for Policy Dialogue. “We are reviewing how we can move from coal-based power plants.”

Bangladesh has one of the largest coal power pipelines in the world, a total of 29 power plants amounting to 33.2 GW of capacity, according to a 2019 study by an Australian organisation that tracks fossil fuel investment. If the minister’s comments become government policy, up to 26 power plants accounting for 28 GW of capacity could be put under review. That’s 90% of the coal pipeline.

“It would dramatically swing the nation’s power development away from coal,” said Simon Nicholas, energy finance analyst at the Institute for Energy Economics and Financial Analysis (IEEFA).

The costs of renewables have been undercutting coal for years and recent price crashes in oil and gas mean that these two fossil fuels are now also price-competitive with coal. Bangladesh’s coal power dream would also be highly dependent on imports of both equipment and coal, an expense and a liability in the age of Covid-19-induced lockdowns and supply chain disruptions.

With the International Monetary Fund predicting that GDP growth in Bangladesh could slip to just 2% this year, compared with a pre-Covid forecast of 7.4%, power demand is expected to be lower, meaning capacity payments will continue to rise unless steps are taken to revise plans for new capacity. Power Cell’s Hossain also acknowledged in the webinar that the government will need to review the country’s power system masterplan considering the radically changed outlook for the economy and power demand.

The 29 coal power plants currently in Bangladesh’s pipeline are at varying stages of development. The three that Hamid suggested will continue as planned – Rampal, Matarbari and Payra – have entered construction and are nearing completion. Their financiers include Chinese, Japanese and Indian export credit and international cooperation agencies. Other projects have signed engineering, procurement and construction (EPC) deals, equity investment deals or are only at the stage of memoranda of understanding.

Many of the projects have been controversial, and opposition to one project led to police firing and deaths. The Payra plant, which is still being built, is right on the edge of a sanctuary dedicated to preserve Bangladesh’s iconic fish Hilsa.

The Rampal project, financed and built by India, has long been attacked by environmentalists for being far too close to the Sundarbans – the world’s largest mangrove forest – apart from emissions. India became the sole financier of the project after Norway pulled out due to the concerns.

However, Chinese companies dominate both the EPC and equity investment market in Bangladesh. According to information on EPC contracts gathered by Market Forces, Chinese construction companies are involved in up to 16.5 GW worth of EPC contracts. Japanese companies, the second largest EPC contractors in Bangladesh, are involved in just 2.4 GW of coal power capacity. According to Greenpeace figures, up to 98% of proposed Bangladeshi coal power plants with Chinese involvement also include equity investment.

Coal power was said to be a solid investment that could deliver stable returns from operating plants. But Hamid’s comments last month will be of concern to investors and contractors. EPC companies could lose out on a lot of business in one of their most promising markets, although they may be eligible for partial compensation under force majeure and other insurance clauses. Equity investments in coal plants that do not reach the commissioning stage will also suffer losses. 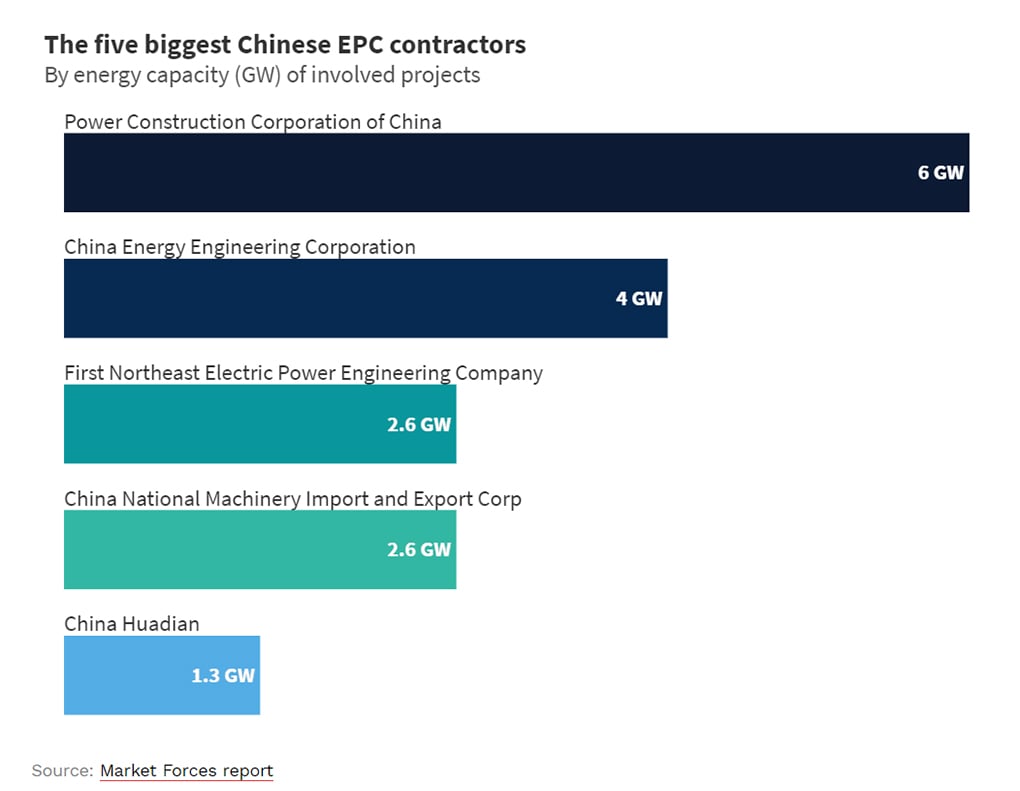 Insurers will also feel the ripple effects, according to Wang Yan, an independent researcher on the environmental, social and governance performance of companies. The minister’s comments “are like a red light” to these companies, warning them that “coal power plants are not a comfortable and profitable deal any more,” she said.

The companies that have signed the most EPC deals for coal power plants in Bangladesh include Power China, China Energy Engineering Corporation and First Northeast Electric Power.

Though of a much larger scale than elsewhere, Bangladesh’s potential pivot from coal is not an isolated incident this year. In June, the 700-megawatt Qasim coal power project in Pakistan was cancelled, in large part due to lack of demand. A number of Vietnam’s coal power projects, long plagued with financing and construction start problems, are also looking increasingly unfeasible in the post-Covid-19 world. In a consultation session held earlier this month, Vietnam’s Energy Institute suggested that the country’s next decade-long power plan due to come into force next year could cancel up to 9.5 GW of planned coal capacity and postpone 7.5 GW until at least 2030 – about half of the country’s total planned coal power.

IEEFA’s Simon Nicholas noted that these shifts on the demand side also raise huge uncertainties for the region’s number one coal exporter, Indonesia, which has been banking on growth markets in Bangladesh, Vietnam and Pakistan as the Chinese and Indian markets shrink.

The review of coal power may not be all good news for the climate though.

Secondly, as indicated by Hamid in the Centre for Policy Dialogue webinar, the government is likely to turn from coal to liquid natural gas (LNG), a fossil fuel that is more or less equal to coal in terms of greenhouse gas emissions when accounted for on a whole-lifecycle basis. Given current overcapacity in the power sector, LNG plants would also likely lie idle and be a drain on the ministry’s budget.

Some Bangladeshi researchers and advocacy groups, such as Transparency International Bangladesh and Waterkeepers Bangladesh, are pushing for an alternative power sector development path that would radically expand renewables.

There is some interest in developing renewables in the country and from foreign investors. Last month, Power China signed an EPC contract to develop 500MW of solar and wind energy in Bangladesh, the largest ever addition of renewable capacity in the country. However, on paper the government remains cautious about renewables expansion, with its 2016 forecast signalling a negligible role for renewables through to 2041.

Hamid’s comments at the end of June, echoed by several high-level energy officials, may signal a huge shake-up in the Bangladeshi energy sector. For now, though, the government needs to be clearer about how it is “reviewing” coal power plans, how many of the 29 plants may be on the chopping board, and what it proposes to do instead. 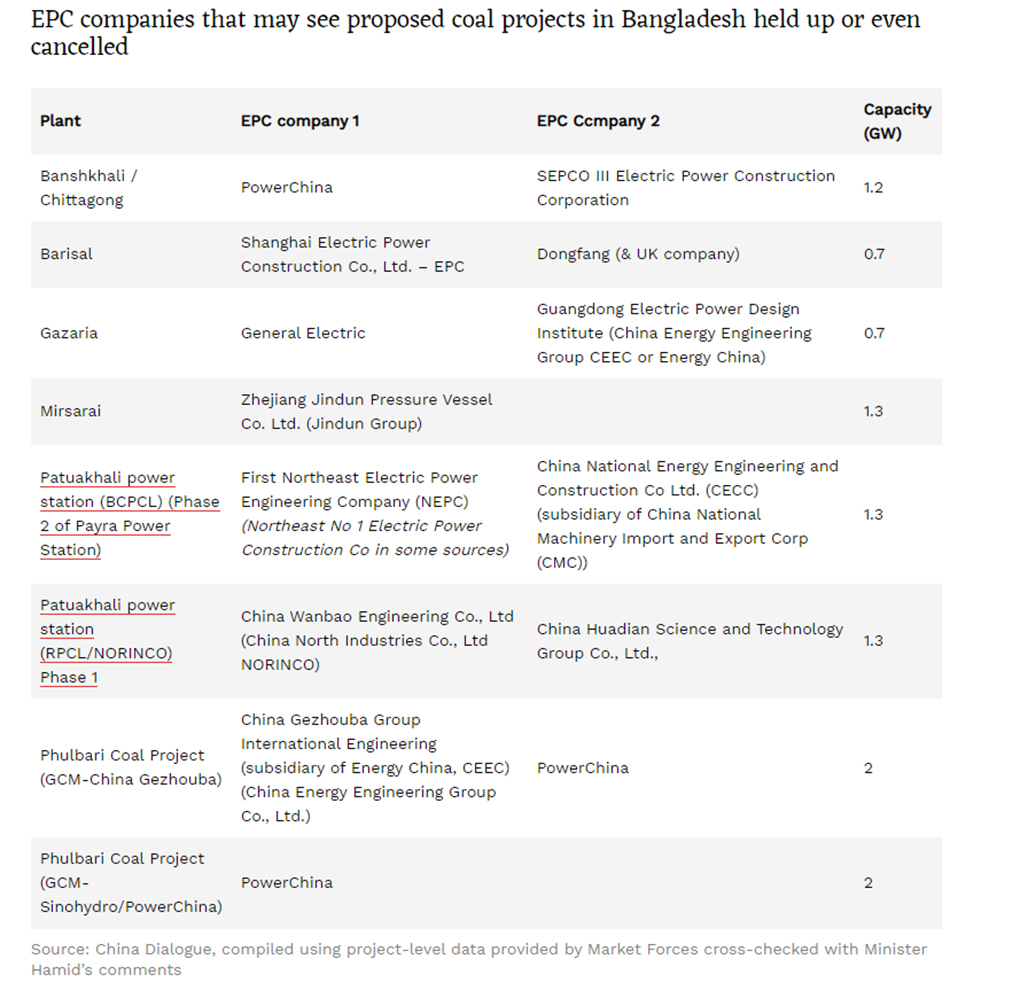