Since 2017, Uzbekistan has made swift progress on its ambition to develop nuclear power. That year, it signed an agreement with Russia allowing Russian companies to build nuclear reactors on Uzbek soil. In September 2018, the countries signed an agreement on the construction of a nuclear power plant consisting of two power units, each with an installed capacity of 1.2 gigawatts (GW). A month later the presidents of both countries, pressing a symbolic button via videoconference, launched the project to construct the first nuclear power plant in Uzbekistan. It is expected to be complete by 2028.

The decision to build the nuclear power plant is fuelled by Uzbekistan’s domestic demand for energy and its intention to move away from fossil fuels.

The country is struggling to keep up with growing energy consumption. In recent years, restrictions have been placed on the population’s use of natural gas and there have been power outages. Uzbekistan’s main source of energy is natural gas, which accounts for 85% of total energy consumption, followed by oil (9%), coal and lignite (5%), and hydropower (1%). By 2030, demand for electricity may be almost double that in 2018.

The government believes nuclear power is one way to diversify the energy sector.

In 2018, Uzbekenergo, an Uzbek state-owned energy company, said that the construction of the nuclear power plant would cost USD 10 billion. In September 2019, Russian state-owned nuclear corporation Rosatom stated that finance for the project, whose cost was then given as USD 11 billion, would be mainly provided through a Russian loan.

Alisher Sultanov, Uzbekistan’s minister of energy, stressed in an interview last year that safety issues were driving up the cost. He did not say the exact total cost, only that “it depends on many factors and it is wrong to talk about it now”.

This makes it hard to assess the price of nuclear energy versus alternative technologies. Nevertheless, some calculations can be made. Alisher Ilkhamov, a research associate at the Centre of Contemporary Central Asia and the Caucasus at the School of Oriental and African Studies in London, writes that “for 10 years of construction of a nuclear power plant, other sources could produce a much larger amount of energy and much faster”. Ilkhamov also points out that the cost of solar energy ranges from USD 39-48 per megawatt-hour (MWh), while nuclear energy costs USD 120-205 per MWh. A solar farm can be built in a matter of months. 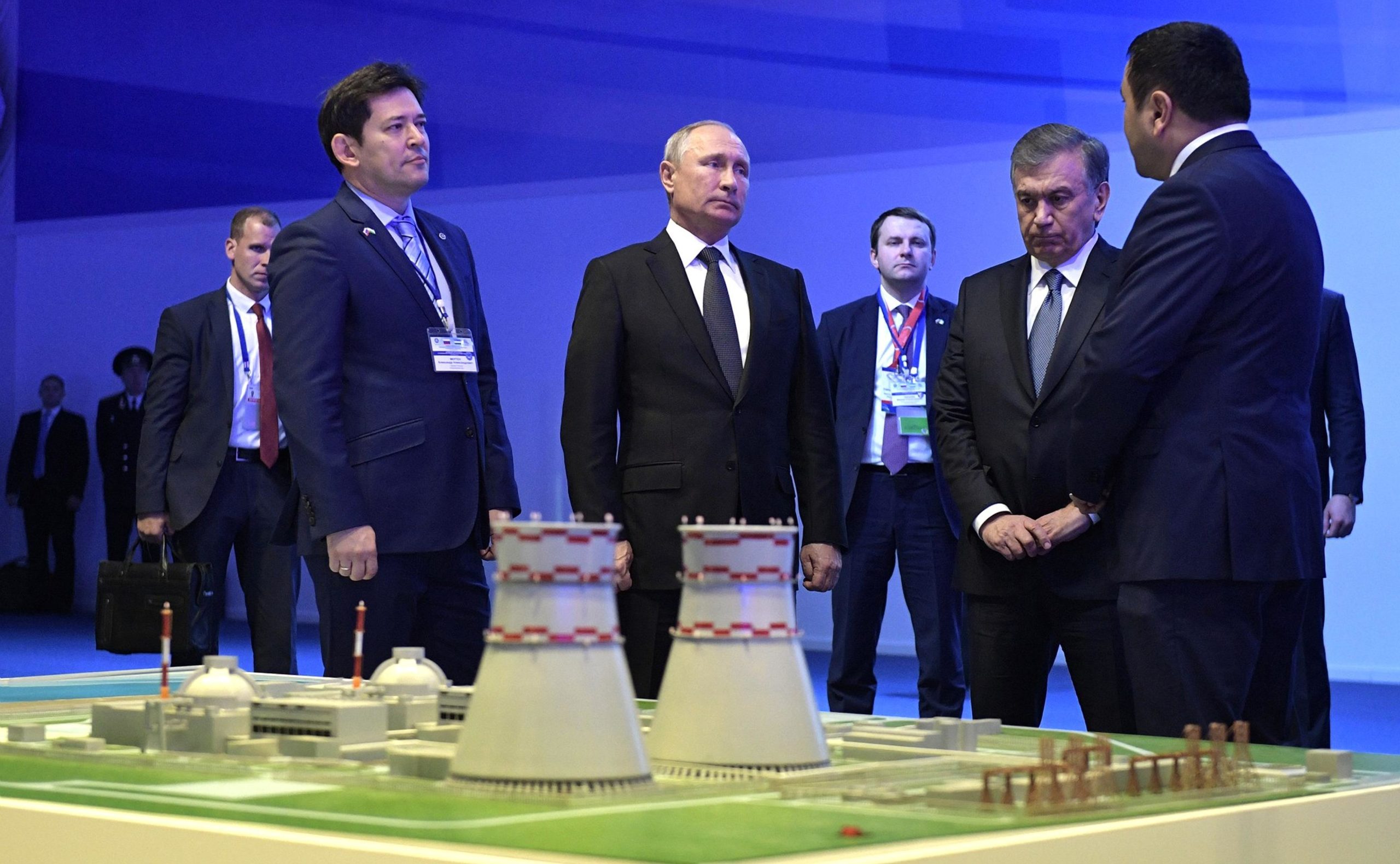 Vladimir Putin (centre) and Shavkat Mirziyoyev (second right) examine a model of the planned nuclear power plant during the launch of the project in October 2018 (Image: Planetpix / Alamy)

Others say that cost is not the only deciding factor. “All of Rosatom’s [nuclear plants] are being built only with loans from the Russian state budget. It is well known that Russia pays for the construction of nuclear plants in other countries according to its own projects for the purpose of political control,” Vladimir Slivyak, co-chair of Russian environmental NGO Ecodefense, told The Third Pole. Slivyak added that countries become “dependent on Russian technologies, fuel supplies and specialists for 100 years. There are never other investors, because economically all this does not make sense.”

Both Rosatom and Uzatom, the Uzbek state nuclear energy development agency, have repeatedly assured the public of the safety of the reactors to be built. “The reactor chosen for construction in Uzbekistan today is the safest in the world. It was developed taking into account not only post-Chernobyl events, but also post-Fukushima events,” said Sultanov in the interview last year.

This does not reassure critics. Slivyak pointed out that the newness of the technology means “there are no extensive statistics on [the reactors], since they have been built not so long ago”.

• Series of pressurised water reactors originally developed in the Soviet Union, and now by a Russian nuclear power company

• Designed to have a 60-year lifespan

Igor Tsoi, an independent energy expert, wrote: “The first independent assessment of the VVER project [in Belarus] was completed by the European Nuclear Safety Regulators Group (ENSREG). The group has concluded that there are significant design and safety issues.” (Editor’s note: after ENSREG’s 2018 report, joint inspections were conducted and some of the questions were closed.)

Farkhod Aminjonov, an expert on energy issues at the Central Asia Institute for Strategic Studies in Tashkent, also expressed caution. A nuclear power plant has never been built in Uzbekistan, Aminjonov said, and thus the country is starting a large endeavour with no experience.

The consequences of a potential accident extend beyond Uzbekistan’s borders. In May 2019 it was decided the nuclear power plant would be constructed near Lake Tuzkan, in Jizzakh region. The border with Kazakhstan is close to the likely construction site. Khujand, Tajikistan’s second-largest city, is only 200 kilometres away. While the neighbouring countries’ reaction to the project remains restrained, the location of a nuclear power plant close to their borders also raises safety questions for them.

The waste fuel from the nuclear plant will be processed in Russia, while the radioactive waste will be stored on Uzbek soil, according to Uzatom’s press service. There is no clarity on where this waste will be stored, but the speculation is that it would be in Jizzakh region, near where the plant is to be built.

“There are no technologies that eliminate the threat of nuclear waste, and reprocessing of used fuel leads to the creation of new radioactive waste to replace old ones. There is no final solution to this problem,” pointed out Slivyak.

Jizzakh is an ecologically rich area. It includes the Aydar-Arnasay system of freshwater lakes, which in 2008 was included in the Ramsar Convention on Wetlands as a site of international importance. Uzatom has insisted the wetland will be protected during the construction and operation of the nuclear plant. However, it did not respond to The Third Pole’s requests for details of an environmental impact assessment. 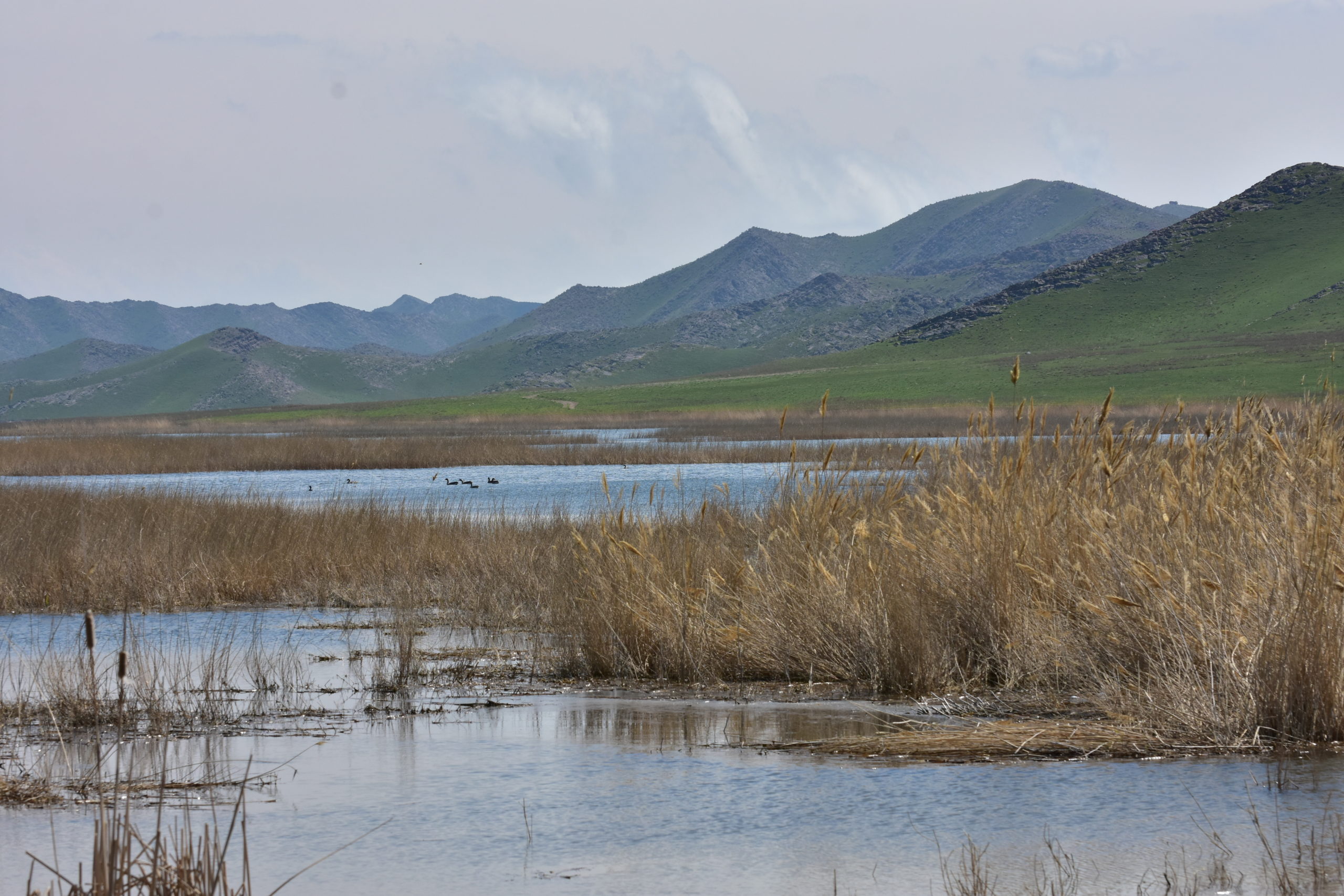 One of the main potential issues is the use of water by a nuclear power plant. VVER reactors need water for heat exchange and cooling. The annual volume of wastewater for two units with VVER-1200 reactors can be about 88,000 cubic meters per year.

Driven by climate change, water availability in the lake system is starting to fluctuate due to heatwaves and rivers carrying less water. These increasing uncertainties may well add to the project’s construction costs.

Much of the argument in favour of Uzbekistan’s nuclear reactors is about the need to reduce dependence on fossil fuels. It is odd therefore that there is limited mention of nuclear energy in the government’s recently published plan for the transition to a carbon-neutral electricity industry by 2050. The report notes that the transition will occur mainly due to the development of solar and wind energy.

Construction of a nuclear power plant in Uzbekistan is a waste of time… It would be cheaper, faster and easier to build solar and wind farms

According to a recent presentation by the Ministry of Economic Development and Poverty Reduction, by 2030 Uzbekistan plans to build 5 GW of solar and 3 GW of wind capacity to cover 22% of the energy mix. From 2021 to 2026, it plans to implement 13 hydropower projects with a total capacity of 756 MW. It also plans to increase energy efficiency by at least 20% by modernising industrial infrastructure and equipment.

Meanwhile, the government’s plan says that demand for electricity in Uzbekistan in 2050 could reach as high as 400 GW. The construction of a nuclear power plant with a total capacity of 2.4 GW does little to meet this challenge.

Olexi Pasyuk, project leader at CEE Bankwatch, an NGO, told The Third Pole: “Construction of a nuclear power plant in Uzbekistan is a waste of time. Hope for the construction of the station will only postpone the implementation of more urgent projects. [It would be] cheaper, faster and easier to build solar and wind farms.”

The image of Lake Tuzkan used in this article cannot be republished without Mariya Gritsina’s permission.

China falls out of love with nuclear