Until about a decade ago, the Jhimpir region in Pakistan’s southern province of Sindh was a dry, barren stretch of land, inhabited by nomadic tribes. Today, it is home to hundreds of mammoth rotating blades in about two dozen wind farms.

Around 90 kilometres from Karachi, Jhimpir is the heartland of Pakistan’s largest ‘wind corridor’, which has the potential to produce 11,000 megawatts (MW) of clean energy. Among early investors was the China Three Gorges Corporation, a Chinese state-owned power company, operating under an investment holding company, China Three Gorges South Asia Investment Limited.

The company has funded and built three wind projects with a combined capacity of nearly 150 MW. The first of these began construction in 2012. The latter two projects, completed in 2018, were funded under the China Pakistan Economic Corridor (CPEC), an integral part of Beijing’s flagship multibillion-dollar Belt and Road Initiative (BRI). In an official statement following Pakistan’s prime minister Shehbaz Sharif’s visit to China on 1-2 November 2022, Sharif reaffirmed the importance of CPEC to Pakistan’s development.

For the time being, renewables represent only a small portion of Pakistan’s power generation mix. Of a total of 43,775 MW, installed capacity for wind and solar represent around 4.2% (1,831 MW) and 1.4% (630 MW) respectively, according to the National Electric Power Regulatory Authority’s State of Industry 2022 report. In terms of CPEC, the November 2022 joint statement from China and Pakistan listed oil and gas as among the “priority areas of CPEC cooperation”.

But a recent shift in the direction of Chinese investment may be hugely significant for Pakistan’s energy future, and the climate.

The shift from coal?

In the years before the launch of CPEC in 2015, Pakistan was desperate to end its long, crippling power shortages. The country was keen to develop its untapped indigenous coal in Thar desert, but multilateral financial institutions were not interested. Along came China in 2013, with an offer to lend massive amounts for infrastructure development and coal mining.

Details of the financing deals are a closely guarded secret, but multiple Chinese-funded coal projects followed. Eight completed or under-construction coal projects are listed as part of CPEC, totalling 6,900 MW, which include four on Thar coal.

Then in 2021, after growing pressure on China – currently the world’s biggest polluter – to curb its greenhouse gas emissions, Beijing announced it would not build new coal-fired power plants overseas, and would increase support for low-carbon energy.

In December 2020, Pakistan announced that it would not build any new power projects that depend on imported coal, and pledged that by 2030 60% of its energy will come from clean and renewable sources. The government has since scrapped a number of potential coal projects, including a 300 MW plant at the Chinese-controlled Gwadar sea port in Balochistan. Reportedly, it is to be replaced by a solar plant.

As Beijing tries to rebrand the BRI as an eco-friendly initiative, Chinese officials have promoted the idea of a ‘green’ CPEC. But Hina Aslam, research fellow at the Sustainable Development Policy Institute (SDPI), a think tank in Islamabad, points out that “in the energy sector, it has meant a greater focus on hydro rather than wind and solar”.

Besides wind energy in Jhimpir, China Three Gorges Corporation is investing heavily in what it is globally known for: hydropower (the company is behind the Three Gorges Dam in China, the world’s biggest power station). In June 2022, it completed a 720 MW project in Karot in northern Pakistan. Work is advancing on a 1,124 MW hydropower plant near Muzaffarabad, and a third 640 MW project has recently been approved in Mahl. The same company is behind both projects.

A lack of consistency in policy has been the biggest issue

Put together, China Three Gorges aims to produce 2,500 MW of renewable energy in Pakistan, mostly through hydro. The Pakistan government – like many others – includes hydropower under the umbrella of renewable energy, but this is disputed by many environmentalists due to the often high environmental, social and financial costs of hydropower, including disruption of important riverine ecosystems. In Pakistan, dams are also politically contentious and a source of discord between upstream and downstream provinces. Yet, both Beijing and Islamabad appear keen to pursue hydropower.

But there are huge challenges facing Pakistan’s shift to renewable energy. “A lack of consistency in policy has been the biggest issue,” says Noman Sohail, senior business manager at China Three Gorges South Asia Investment Ltd. “Arranging lenders and finance for renewable projects is not a problem. But it’s disorienting when policies are reversed, tariffs renegotiated and unpaid capacity payments allowed to pile up.”

There is one form of renewable energy in particular that presents immense potential for Pakistan, but which has seen little investment to date: solar. A World Bank study in 2020 urged Pakistan to urgently expand solar and wind “to at least 30% of electricity generation capacity by 2030, equivalent to around 24,000 MW”. As of 2022, the proportion is 5.6% according to the National Electric Power Regulatory Authority’s State of Industry 2022 report.

Pakistan’s slow take-up of solar energy is evident from the fact that of the 21 energy projects completed or in development under CPEC, only one is solar: the 1,000 MW Quaid-e-Azam Solar Park in Cholistan Desert, Punjab, built by Chinese company Zonergy. This project, promoted as one of the world’s biggest solar parks, was meant to be completed by 2017. But only 40% of this capacity has been implemented so far. 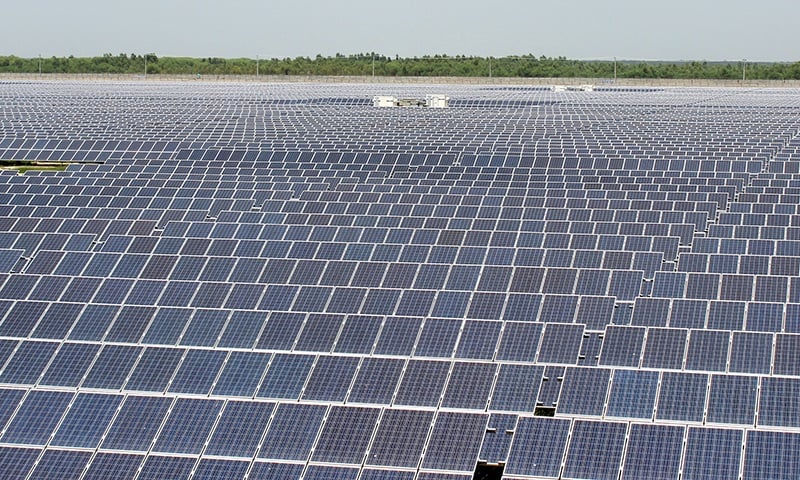 Suleman Rehman, chief executive of Burj Capital, a Dubai-based investment company focused on renewable energy in Pakistan, says that regardless of the government’s apparent lack of focus, the demand for affordable solar power is growing exponentially. “The competition is getting intense. More and more local players are coming up every month. Installing a 4 MW solar project is no longer a big deal for us,” says Rehman.

According to Rehman, the private sector is not waiting for policymakers to facilitate the energy transition. Those who can are turning to the solar option. That explains the recent proliferation of rooftop photovoltaic panels in big cities, as well as in off-grid villages across the country.

Costly fuel imports have already had a crippling effect on Pakistan’s economy. This year, the volatility of global energy prices, exacerbated by Russia’s invasion of Ukraine, took a damaging toll on Pakistan’s foreign exchange reserves. The country was on the verge of a default before the International Monetary Fund agreed to step in to help it stay afloat.

In an attempt to reduce dependence on imported fuel, on 1 September 2022 prime minister Shahbaz Sharif announced the rapid deployment of 10,000 MW of solar power in the country. But details of how this will be achieved, and by when, are sketchy. The plan reportedly involves transitioning all public sector buildings to solar power. The proposal also encourages power plants running on coal, oil and gas to partially shift to solar power.

China will have a crucial role to play if this shift to solar is to happen, says Rehman, though it may come in a different form than the mega-projects seen under CPEC.

“China will still have a big role because they are producing the cheapest [solar] equipment worldwide. But I really hope the government won’t put this under CPEC because that would put local players at a disadvantage,” says Rehman.

Some Chinese companies will still be involved in investment in solar, but most will not be interested in small local projects, he feels. “In my experience, customers are happy for us to import Chinese-manufactured technology or their raw material, but they prefer to have local contractors and engineers to deal with.”

So far, Pakistan’s dependence on imports from China has prevented creation of local supply chains, says Rehman. That, he says, will need to change if the country is serious about exploiting its solar potential. “The government can facilitate this transition by encouraging domestic manufacturing,” argues Rehman.

Extension of CPEC to Afghanistan could link infrastructure across continent

Coal dust casts a pall over children’s health in Pakistan

Opinion: Pakistan’s Diamer Bhasha dam is neither green nor cheap