A group of children listened spellbound to a webinar on Zoom. Bhaskar Jyoti Mahanta, the director-general of the Assam Police, told them how to stay healthy and safe during the coronavirus pandemic. He explained what social distancing was; how to protect themselves from physical, psychological and sexual violence; and the hurdles to online education in inaccessible areas.

This experience is possible because there is a library on Majidbhita, a char or riverine island. Majidbhita sits on the Beki River, a tributary of the Brahmaputra, in the northeastern Indian state Assam.

The webinar was organised earlier this year by the Assam police and UTSAH, an NGO that works on child rights in the state. 105 children across Assam participated in the webinar; due to social-distancing rules, only five young people from Majidbhita could participate. 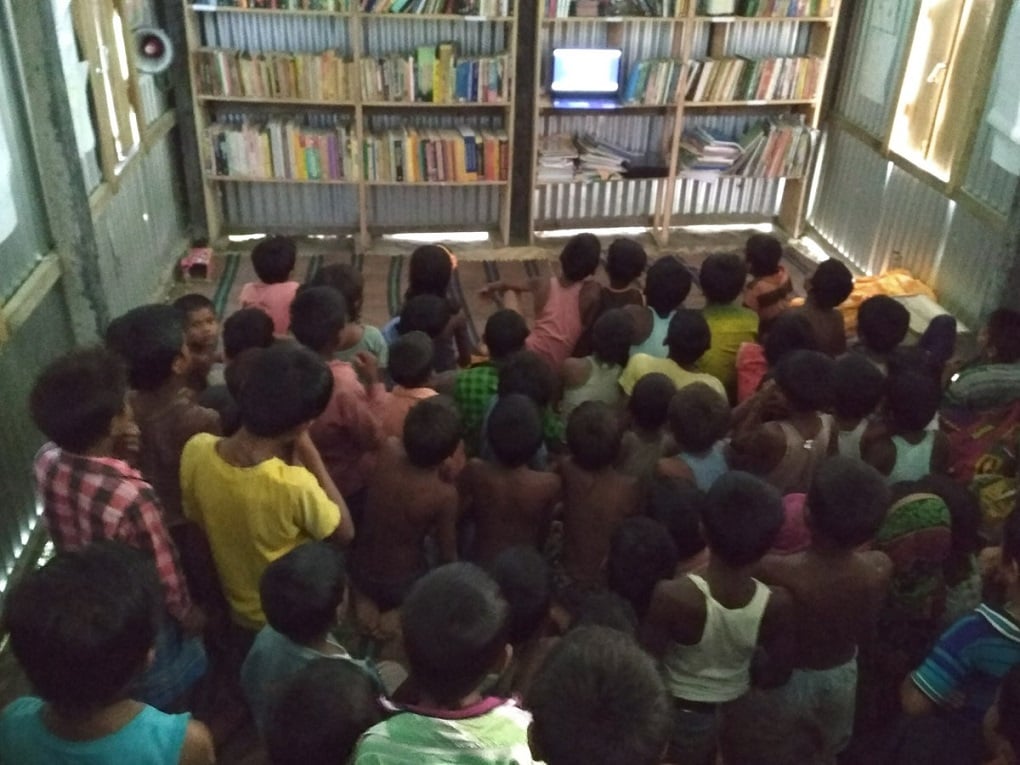 Children from the char watching videos on a laptop. These are animated videos prepared by UNICEF on disaster risk reduction and child protection

Miguel Das Queah, who founded and leads UTSAH, said, “We are trying to give underprivileged children a platform to learn about their rights and the remedies they are entitled to. Rural libraries in inaccessible areas can be both a learning hub and empower children to exercise their rights under the UN Convention.”

The Parag Kumar Das Char Library and Research Centre was set up in 2016 by Jhai Foundation, an NGO. It is run by four young local volunteers: one is a science graduate and three have completed high school. They help students with subjects like English, science and mathematics.

At first, the volunteers had to go door-to-door, urging parents to send their children to read books in the library. Now, the facility is widely used and popular with local children. When the library opened, it had a one-off membership fee of INR 5 (less than USD 0.10), but this rule is not imposed strictly.

There are more than 250 families on the char, over 80% of whom live below the poverty line. There are three primary schools. For higher education, students have to leave the island and make a risky journey by boat. As a result, the library caters to unmet educational needs and has become a learning hub.

See: Will the ‘educated’ save the environment?

As well as crowdsourced storybooks and reference books, the library has a laptop used to show videos to the children. This way, they learn about indigenous fish, birds and insects, as well as accessing UNICEF-produced videos on disaster-risk management and the evils of child marriage.

Zahedul Islam, the librarian and president of the initiative, said, “Technology has changed lives. The internet has shown us the world. Google and YouTube have revolutionised knowledge. If we had had a library like this 10 years ago, we would have been miles ahead.”

Islam is a resident of the char who completed high school, a feat in an area where almost 80% of residents are illiterate. “I grew up on this char. The library has contributed a lot in spreading the light of knowledge. Now, during lockdown, we are helping children access online education,” Islam said.

With the monsoon now well underway, most of the char is flooded and the library, which is normally is open every day, is closed. However, Islam, who is a member of the WhatsApp group for the local schools, has been passing on notes from teachers to over 100 children, who come to his house to pick them up.

See: On Assam’s biggest river island healthcare is far away

The library is made out of sheets of tin and was built on a raised platform, which means it escapes the worst of the floodwaters. Many of the char’s poorest households have replicated this design. But the library is still the highest point in the char; during floods it looks like a floating house.

There is also a modified boat, which is used as a floating classroom when the school buildings get flooded. However, it is in need of repair and is out of action during the pandemic.

There is no electricity on the island, but the library has a solar-powered lamp. Meanwhile, volunteers like Shahnaz Parbin are spreading a different kind of light in the river island – that of knowledge. “The library is open seven days a week from 3 pm to 5 pm. Sometimes we have to convince the parents as children are engaged in domestic work, cooking and farm work. Some farmers feel that it is a waste of time,” she said. Parbin said she never got to visit a library when she was young. “Children learn a lot about the world from these books. It is as if the world is in their hands,” she said with a twinkle in her eyes.

Rituparna Neog, a library worker and storyteller who makes videos about literature for children on YouTube, stayed in the library for 10 days in June 2018. (There is an extra room with a bed and a washroom for whoever wants to stay and experience life in a char.) Neog said, “I had never been to a char before. I told many stories to the children. The children taught me some indigenous games like dig dig which is similar to kabaddi [a team contact sport].”

Neog said that the library is a powerful agent for change. He remembered one evening, when a mother came to ask if he had eaten dinner. Peeping through the window, she saw her son looking through the books and said, “My life is over. I want him to study well and be a great man.”

The library is also used as a community centre. One important example is mentoring adolescent girls. Manjuwara Mullah, a volunteer, regularly talks to them about menstrual hygiene. She said, “We have done social profiling of the families with adolescent girls. We are making a concerted effort to stop teenage marriages and try to inform the girls about their reproductive health.” Mullah also helps them to improve their quilt-making skills. “We had training for them in the library. And we hope to sell quilts done in kantha [a type of embroidery] work online,” she added.

Sometimes the library is a space for cultural exchange, where people can sit, sing and debate. Abdul Kalam Azad, the founder of the library, said, “We once invited a farmers’ group from Jorhat. They shared how they take care of their cattle and their flood experiences. The night was spent singing the folk songs of their respective areas – borgeets, zikirs, bhatiali, murshidi.”

In addition, many students and researchers from across India and abroad come and stay in the library and interact with the local community. Abhishek Chakraborty, a social worker, visited the library regularly for two years for his master’s dissertation at Tata Institute of Social Sciences in Guwahati. “I realised how much difference a space like this can create,” Chakraborty said. “The extra inputs and storybooks are for the privileged few. There are a lot of things that we take for granted.”

“We want to create more such libraries in adjoining chars. We have to create a rapport with them first. The biggest challenge is to get a dedicated local volunteer,” said Azad, the library’s founder.