“This river is our life,” said 38-year-old Jobeda Khatun, as she looked at the vast body of water known as the Meghna river. Her boat is also her home, as it floats on a canal connected to the river in an area called Sluice Gate, about seven kilometres south of the district headquarters of Bhola in the southern part of Bangladesh. There are 50 families living in the 40 or so boats in this canal — around 200 people in total.

The locals call these fishers ‘Babaija’ but they call themselves the ‘Sardar’. Many confuse these fishers with the nomadic community called ‘Bede’, a marginalised community who make a living by catching snakes. However, these boatmen of Bhola are mainly fishers. They have no other occupation. Except for some special cases, they have no other relationship with the people from the mainland. More than a thousand such families live in boats in the entire Bhola district. Most of them are victims of river erosion. After losing their houses to the river, the boats have become their last refuge. 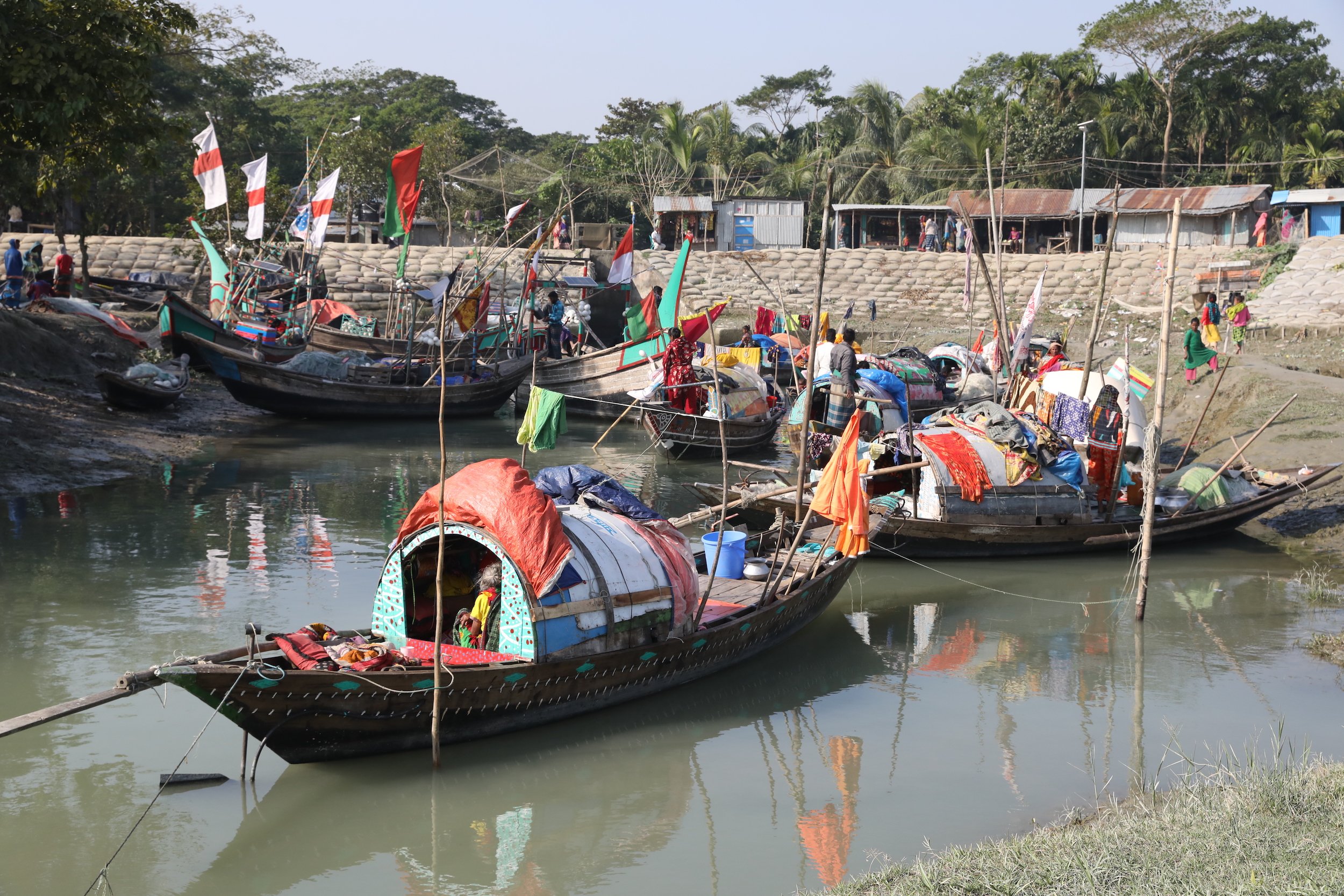 Except for trade with land dwellers, the Sardar are strangers to the land. [Image: Md. Abdus Salam]

Women, the keepers of wealth

Jobeda, who lost her home to river erosion in another southern district, Shariatpur, joined the fleet when she was just seven years old. This is where she grew up, got married and gave birth. Jobeda’s husband is also a fisherman.

Fishing is the occupation of men, while most of the women are housewives. But even if they are not in any formal occupation, women are quite empowered in these families as they carry the wealth of the community. During the peak of the fishing season, the floating people of these villages buy gold with the surplus cash since they do not have any bank accounts — an activity largely carried out by women. Most of these ornaments are placed in more than one piercing in the nose and ears of the women, who have multiple piercings. 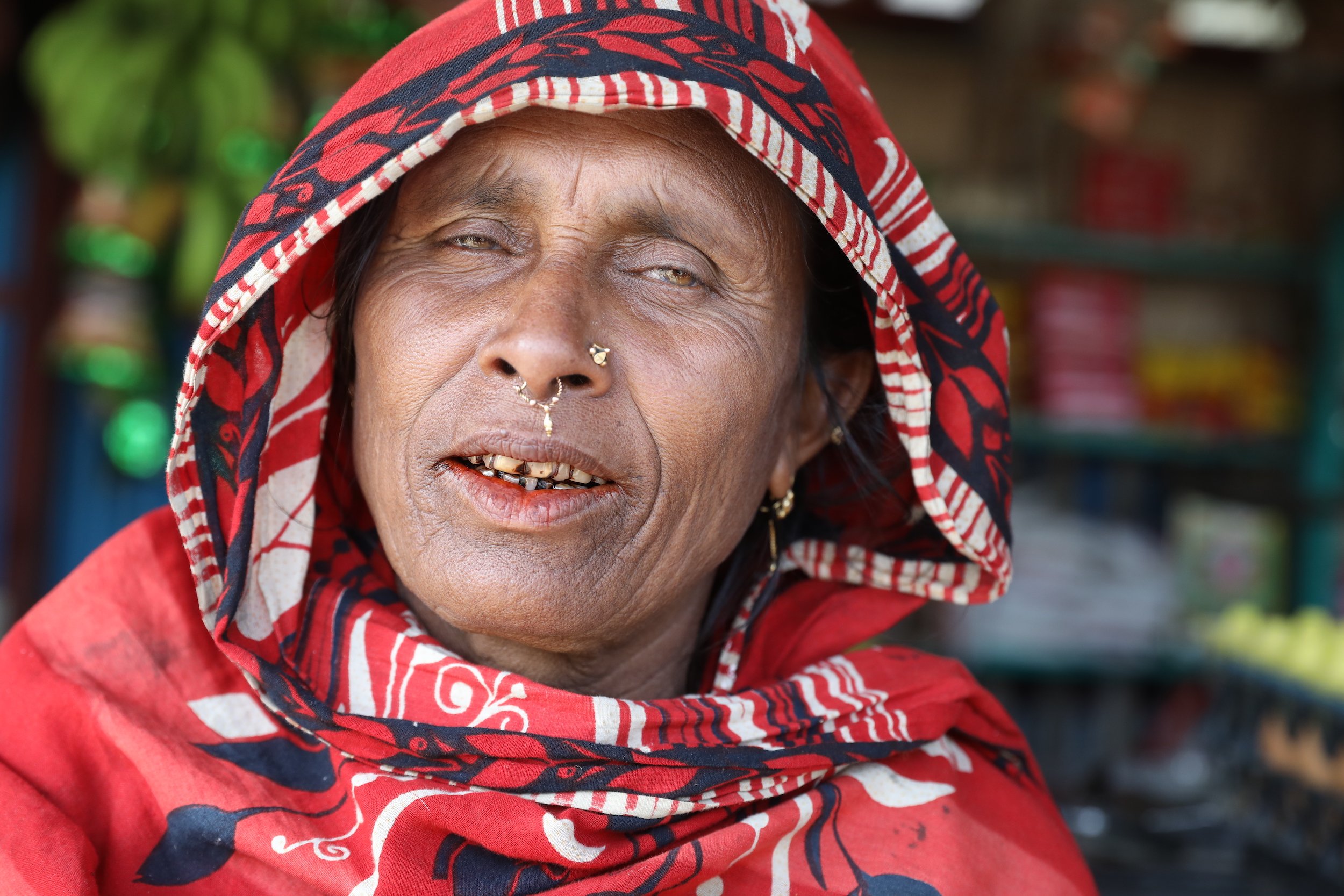 The women of the Sardar community carry the wealth of the community in their gold ornaments [Image by: Md. Abdus Salam]

Rani Begum boasts many gold earrings. “The gold is very useful in times of hardship. As the valuables are in our hands, the men obey us. We are in charge of protecting our assets. Maybe that is the reason why we enjoy more freedom in our society,” she said, smiling.

In fact, all the men and women of the Sardar community are quite independent and self-reliant. Everything the family needs is in the boat floating in the water. They are poor but their belongings — which include cooking utensils, pillows, beds, chairs, even small shelves — are stored inside the boat. 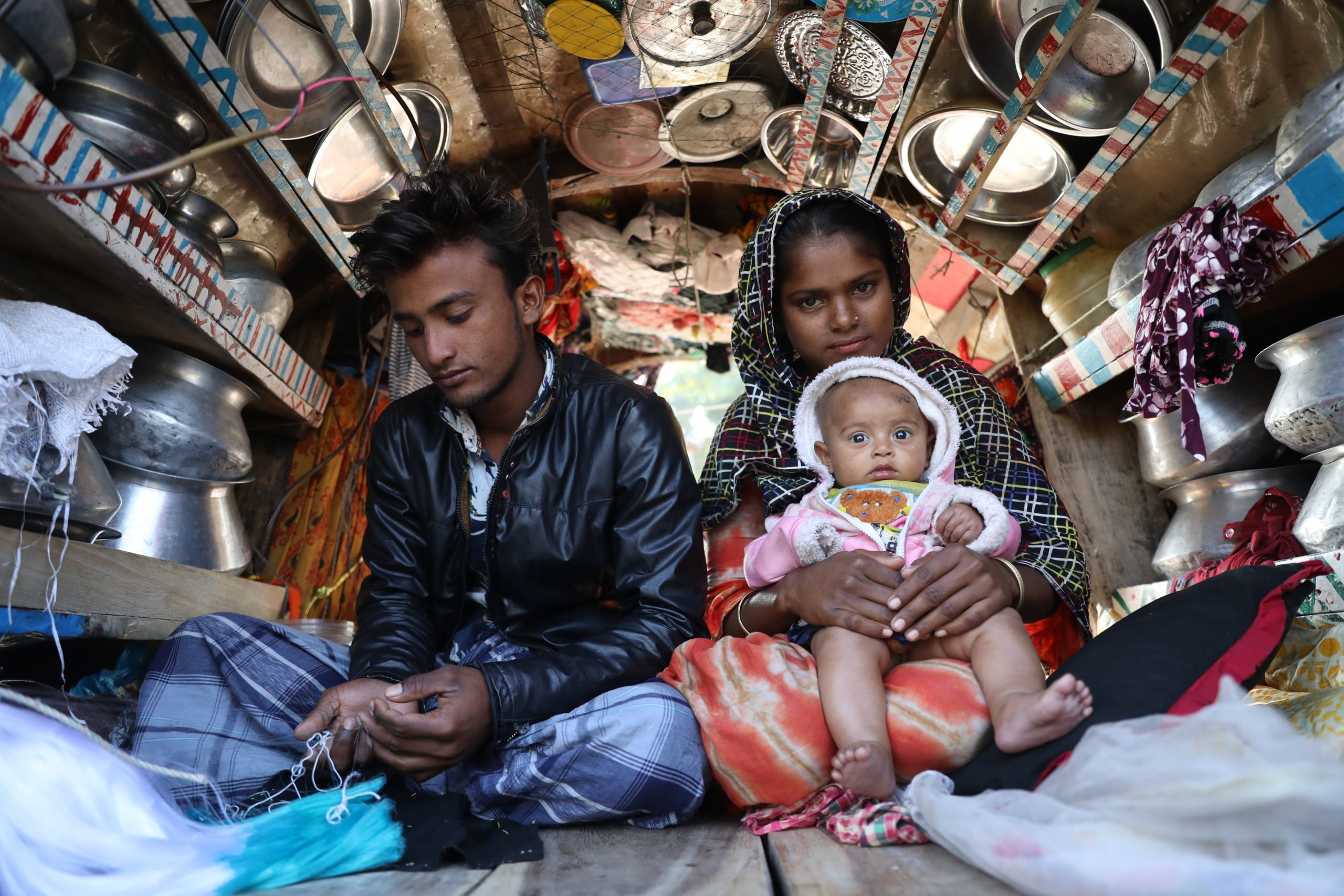 The boat homes of the Sardar host all their supplies, from food to medicine [Image by: Md. Abdus Salam]

The locals consider them to be lower caste people. The land dwellers are the main customers of these fishers, as they do business with the ‘Babaija’. It is a relation of monetary transactions, not one of kinship. The boat people cannot establish marital relationship with the mainstream people.

“I understand that the mainstream people look down on us. But to be honest, we have no enmity with them for this,” said Alif, headman of the boat village. The Sardars buy rice, pulses, salt and other daily necessities from the local shops of the land dwellers and sell fish, this is their relationship. 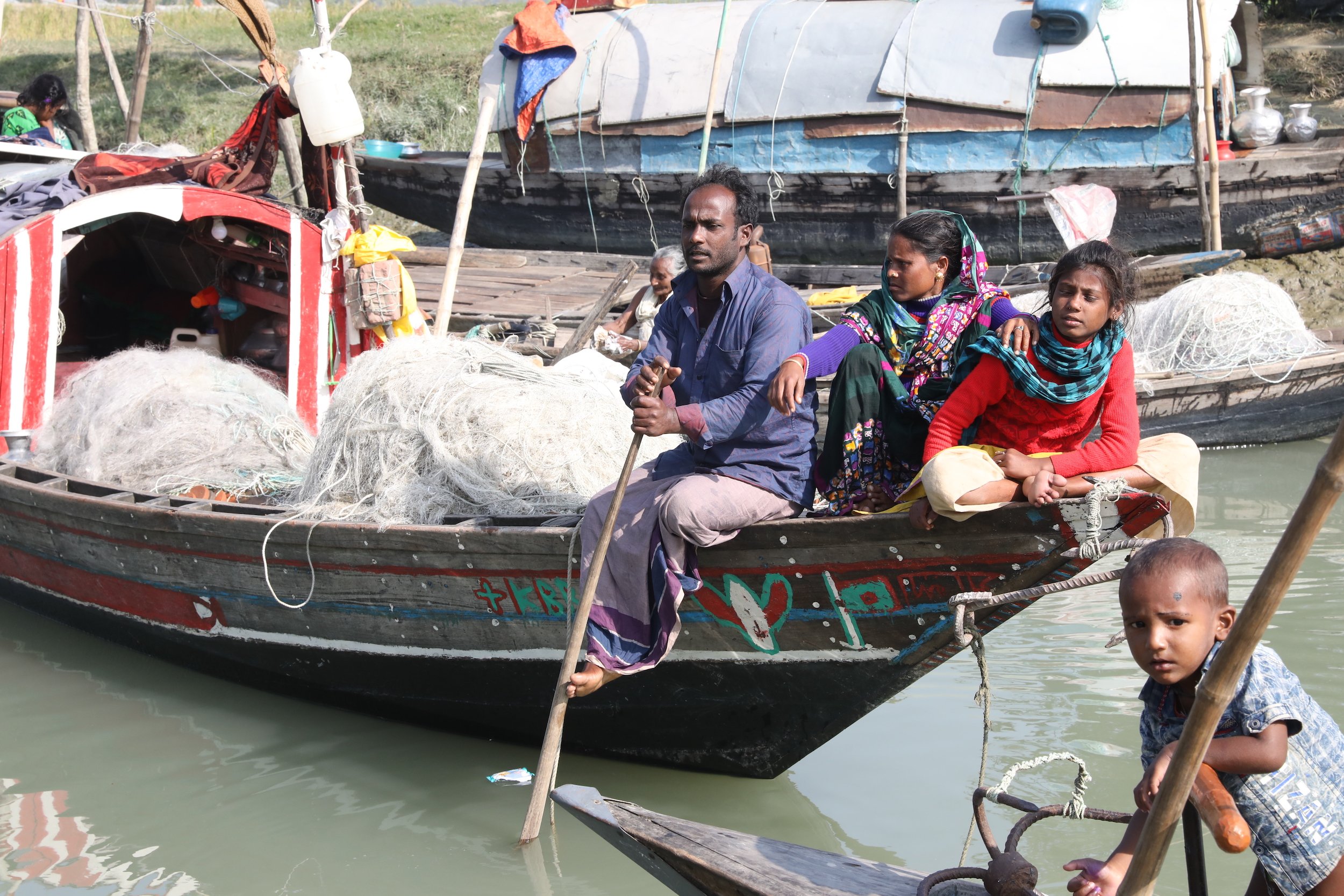 The boats are the pride and joy of the Sardar, and nobody steps upon one with shoes on [Image: Md. Abdus Salam]

The people of this boat village decorate their only refuge — the boats — with great care. They carve the wood on the bodies of the boats to draw various colourful designs. Many others draw alpona or colourful motifs on the walls of the boat. They remove their footwear before entering the boats. 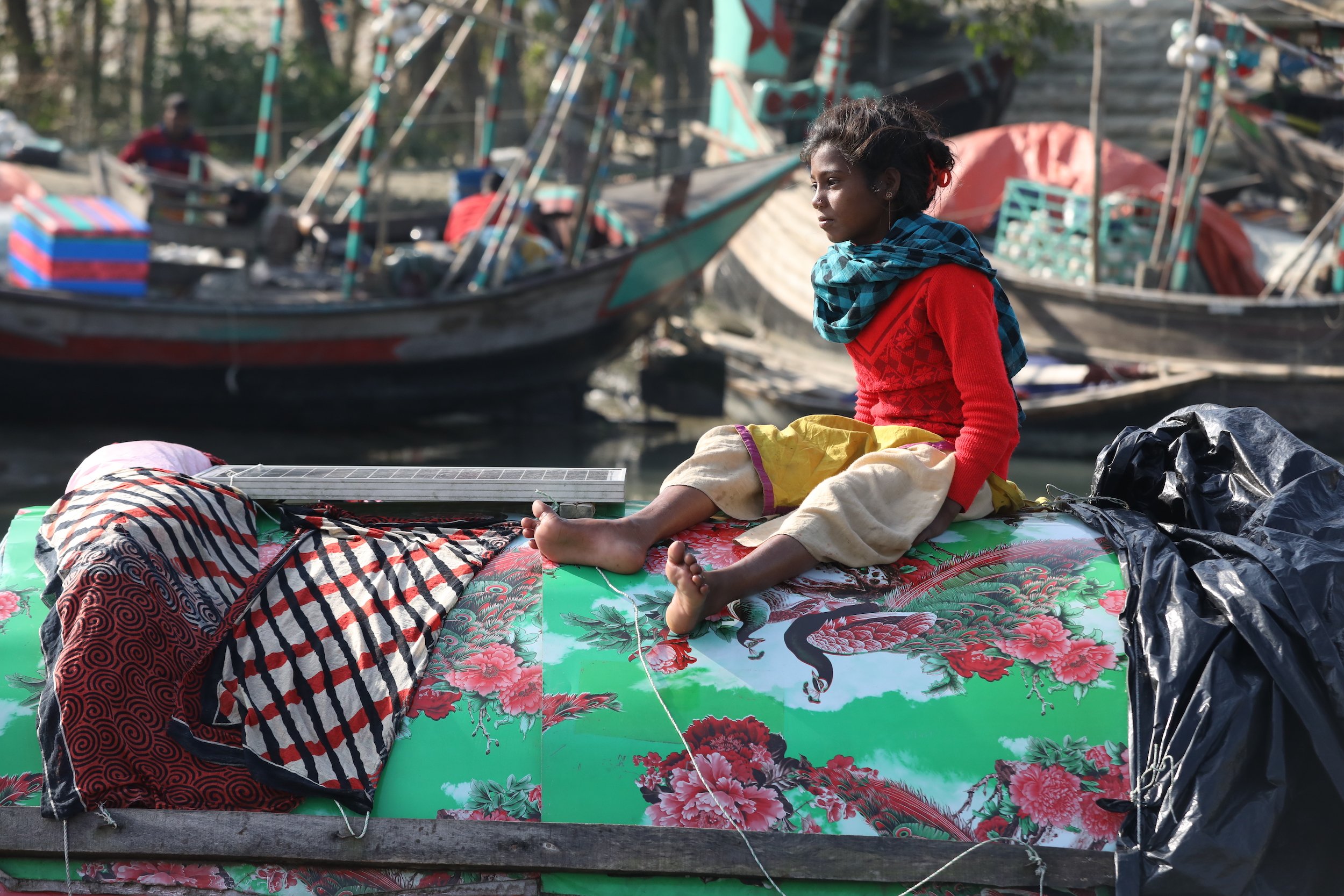 Recently, an NGO gave solar panels to the boat people. Alif, the headman, said that this helped charge their mobile phones.

While it is impossible to raise animals on the small boats, almost every boat boasts a shelter for doves, a poignant symbol of peace and freedom. 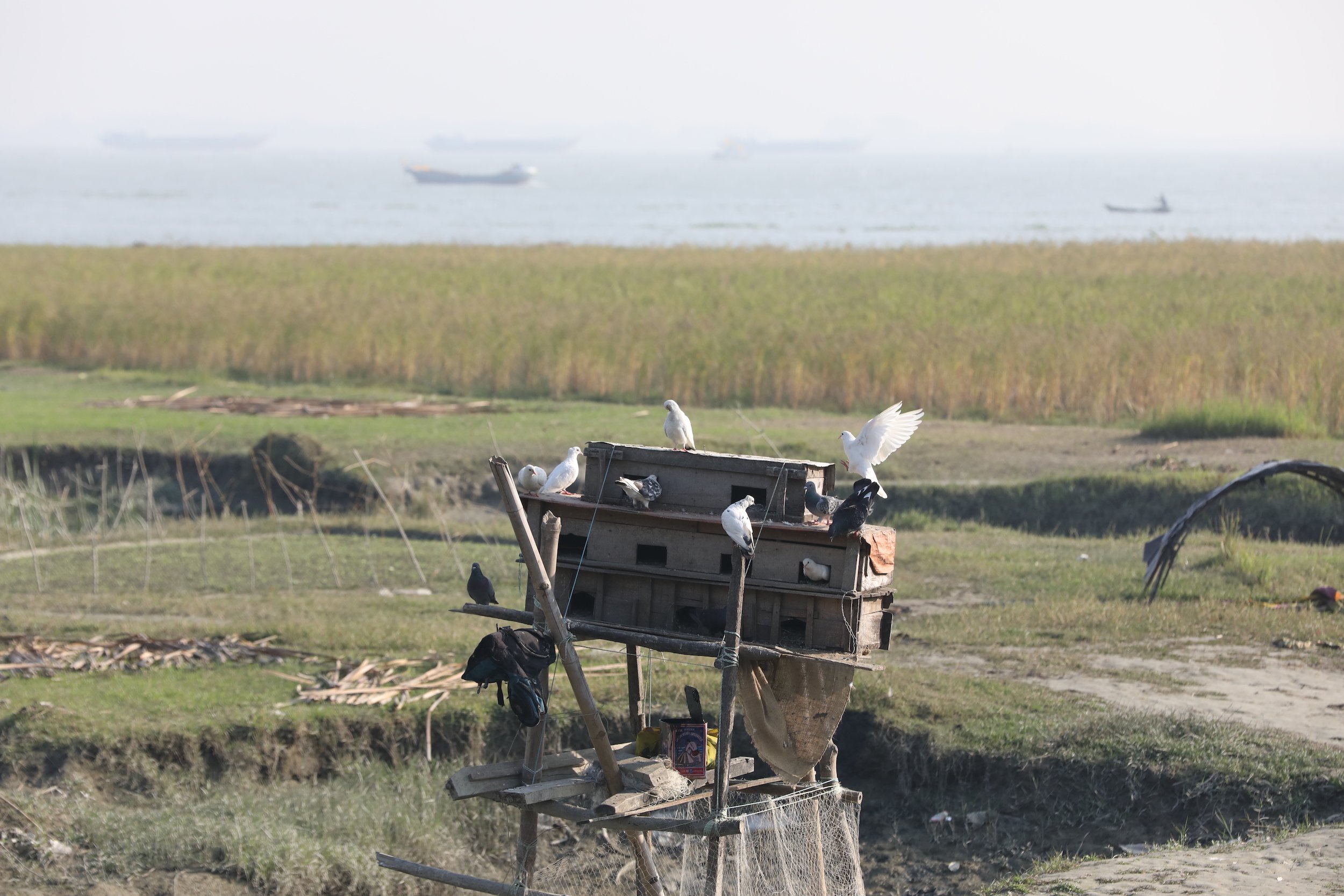 Voters, but deprived of assistance

Every adult boatman has a national identity card. They also vote. Without a permanent address or residence, one is usually not allowed to become a voter. But the local politically influential people have enlisted the boat people as voters for their own interest. “When an election comes, the boatmen get to meet all these ‘important’ people. We may fulfil our civic duty to vote but no one comes to forward to protect our rights later. No one comes to meet us after the election,” said Mohammad Yunus.

There is no effort to provide health, education, or sanitation facilities for the Sardar. About 50 children of different ages were found in this ‘boat village’. None of them had a chance to go to school.

Salam Mia, a fisherman, said, “When boys grow up, they become fishers like their fathers. And the girls are married off. This is the destiny of our children.” 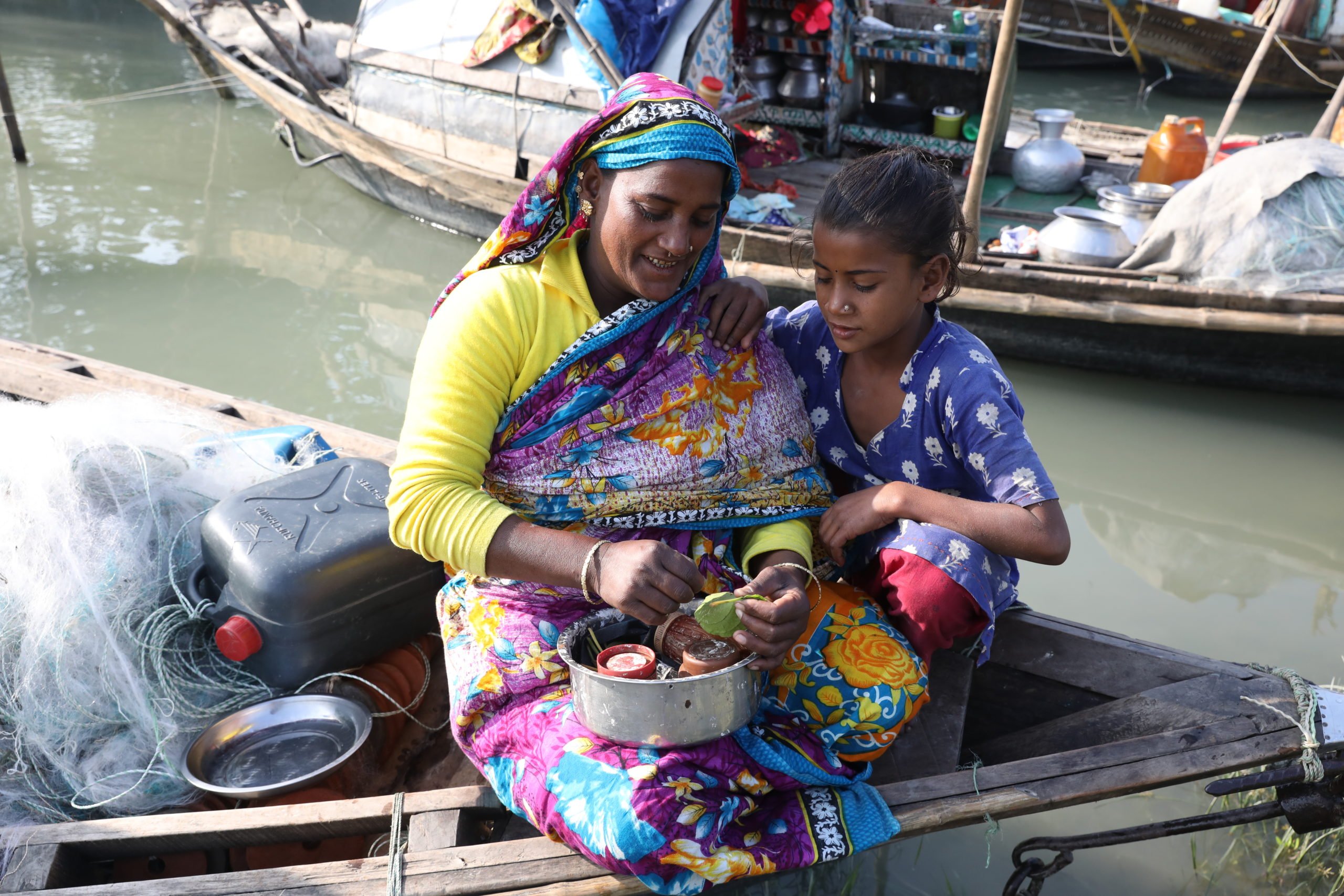 From birth to marriage to death, everything happens on the boat [Image: Md. Abdus Salam]

Sixteen-year-old Rupsha Begum was bathing her child in this fleet of fishers. She was married off at the age of 14. Rupsha said that child marriage is a commonplace here. Each married couple has three to four children.

“If our boys and girls had access to education, child marriage would not have been so prevalent,” Rupsha said.

They also do not have access to healthcare and sanitation facilities alongside education. They themselves try to cure diseases with home remedies. However, they keep some emergency medicines in the boat for fever or stomach ailments. They buy these from the nearest pharmacies. Most people do not take any birth control measures. Almost all the children are born inside the boats. 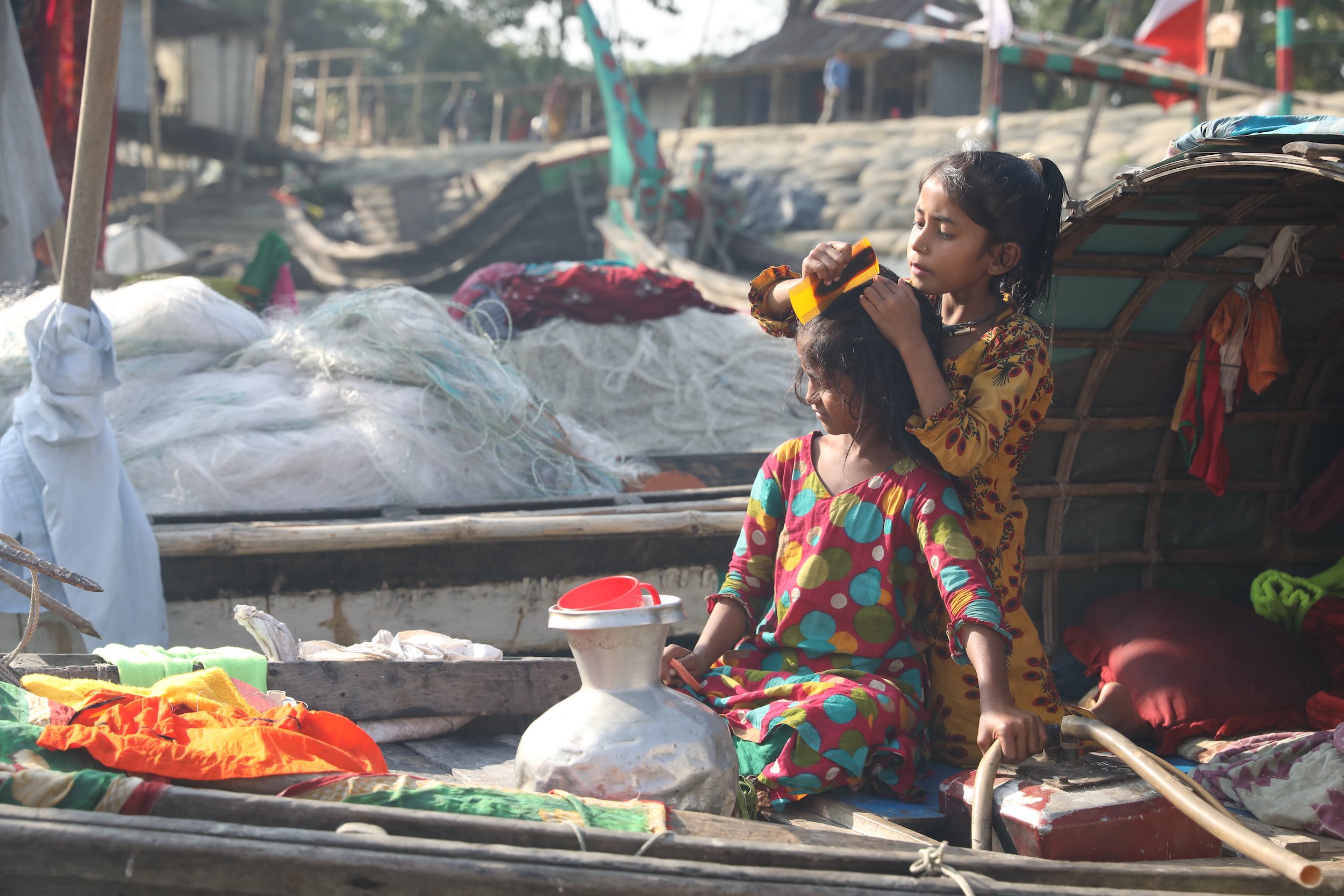 With no access to health and sanitation infrastructure, women give birth to and raise children on the boats [Image: Md. Abdus Salam]

The women of the boat village suffer the most due to the lack of toilets. “Men can go to the toilet wherever they want. We can’t do that. The women here go to toilet very early in the morning for privacy. We can’t go to the toilet during the daytime,” said Josna Begum, a housewife. “During menstruation, we use old rags.”

No help when the storm comes

For this community, natural disasters add insult to injury. Bangladesh has endured big cyclones like Sidr, Aila, Amphan in the last decade and a half. Many of the boats were destroyed in the latest cyclone Amphan. The land-based fishers received a lot of help but the Sardar were ignored.

Rustam Sardar said, “When there is a cyclone, we go to a nearby shelter. It saves our lives. But our boats, the source of our livelihood, are damaged. After the storm, we have to rebuild the boats. No one comes to help us.” 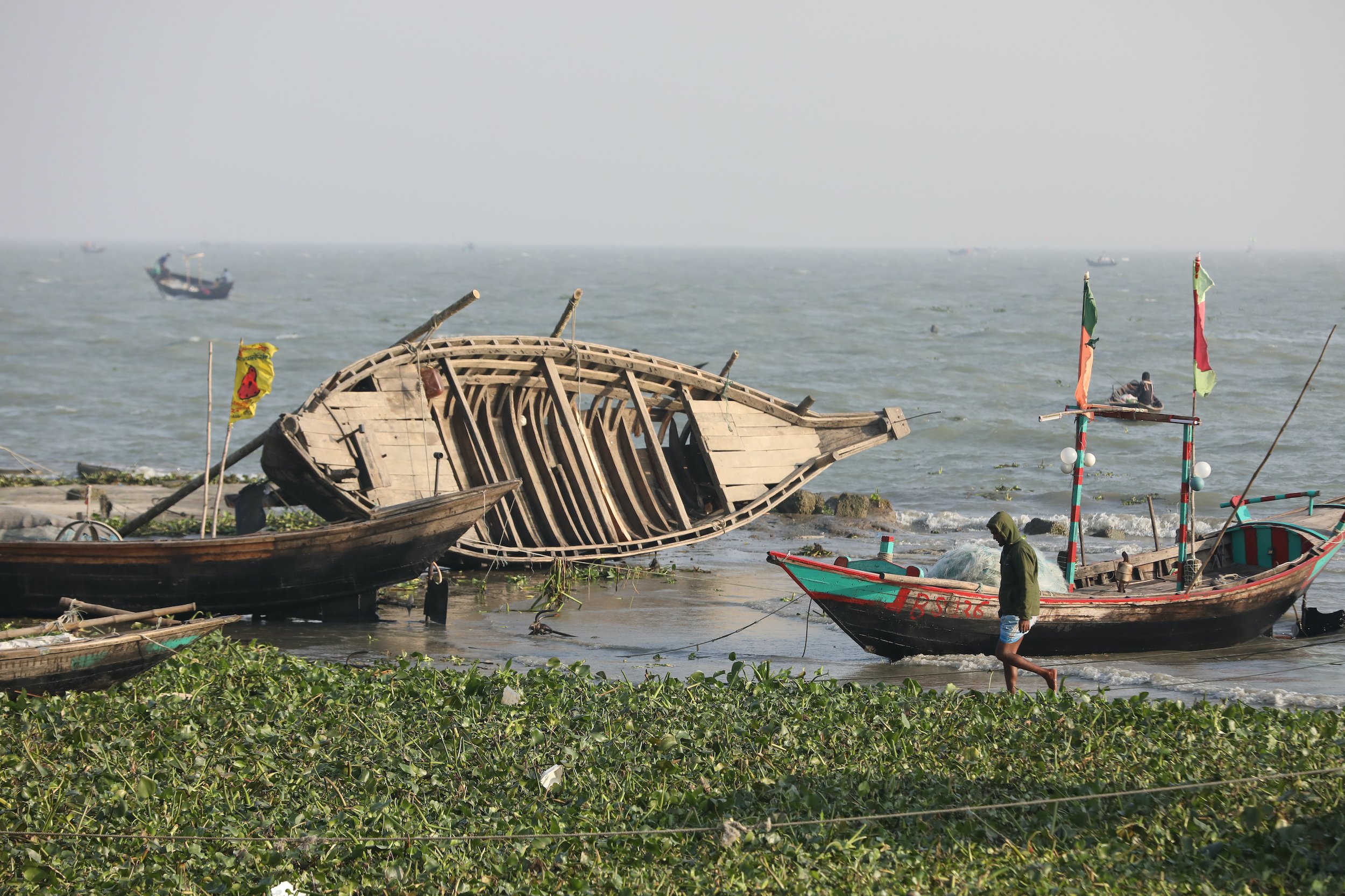 Boats are damaged by storms and no assistance comes. [Image: Md. Abdus Salam]

Microfinance is a major part of the economy of Bangladesh. But no one comes to these this community to give them loans either.

Bhola is the only island district in Bangladesh; it is 200 kilometres away from Dhaka by river. But it seems that the boat people are inhabitants of another planet. Any government opportunity is elusive to them. All they have are national identity cards.

When asked to show his NID card, Mosharaf Sardar, a boat resident, ran to get it. “I take good care of it. It gave us an identity. Maybe I don’t get any opportunity from it now but one day I definitely will,” said Mosharaf. As with many identity projects in South Asia, his name in English is spelled slightly differently on his ID card.

The colourful, though straitened, conditions of the Sardar are now burdened further with the impact of climate change. Salinity is increasing in the coastal districts of Bangladesh as the sea rises. Bhola district — home to these fishers — is one of the 19 coastal districts of the country. The Meghna river, which is home to the fishers, flows into the Bay of Bengal. The fishers said that the fish are slowly disappearing.

“Before you could catch fish during most times of the year. Now there is no fish like before,” lamented Rustam Sardar. “The change has happened so fast, it’s shocking.”

As India breaks the taboo over sanitary pads, an environmental crisis mounts