Summer 2020 was an unlikely time for one of the most exciting archaeological discoveries of recent years. The Covid-19 pandemic had restricted the ability of researchers to travel to the field and work in close proximity. Despite these practical difficulties, in eastern Kazakhstan a small team of archaeologists were preparing to excavate a burial mound, or kurgan.

This particular kurgan in Eleke Sazy, a valley bounded by mountains, may not have seemed the most promising. While part of a complex of 300 burial mounds where some remarkable discoveries had been made in recent years, the central grave pit of the ancient burial site had been looted in antiquity.

Yet as the archaeologists excavated the foot of the burial mound, they found something astonishing. Beneath a protective ‘shell’ of stones, they unearthed treasure after treasure. Intricate and glimmering, the artefacts were made of bronze, overlaid with gold foil. The hoard contained a total of 830 golden objects, which had once been used as ceremonial decoration for horse harnesses.

The horses would have been buried wearing these lavish items, as a memorial gift and tribute to the unknown high-ranking ruler the grave was created for. Last summer was the first time they had been seen in 2,500 years. 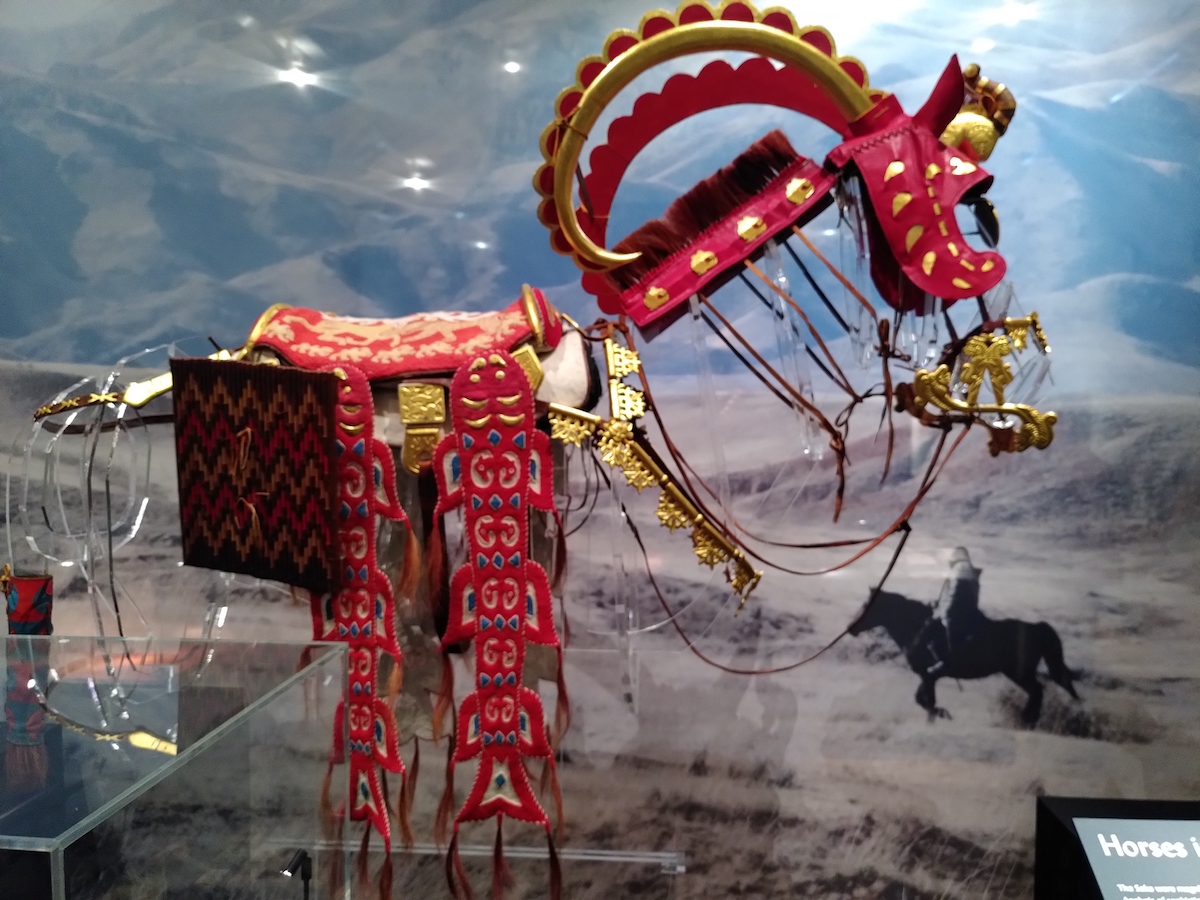 A recreation of a horse’s ceremonial burial harness. Horses were central to Saka culture and were buried in kurgans along with high-ranking men and women. Their elaborate ceremonial harnesses often included stag antlers or ibex horns, transforming the horses into mythical beasts. (Image: Natalie Taylor) 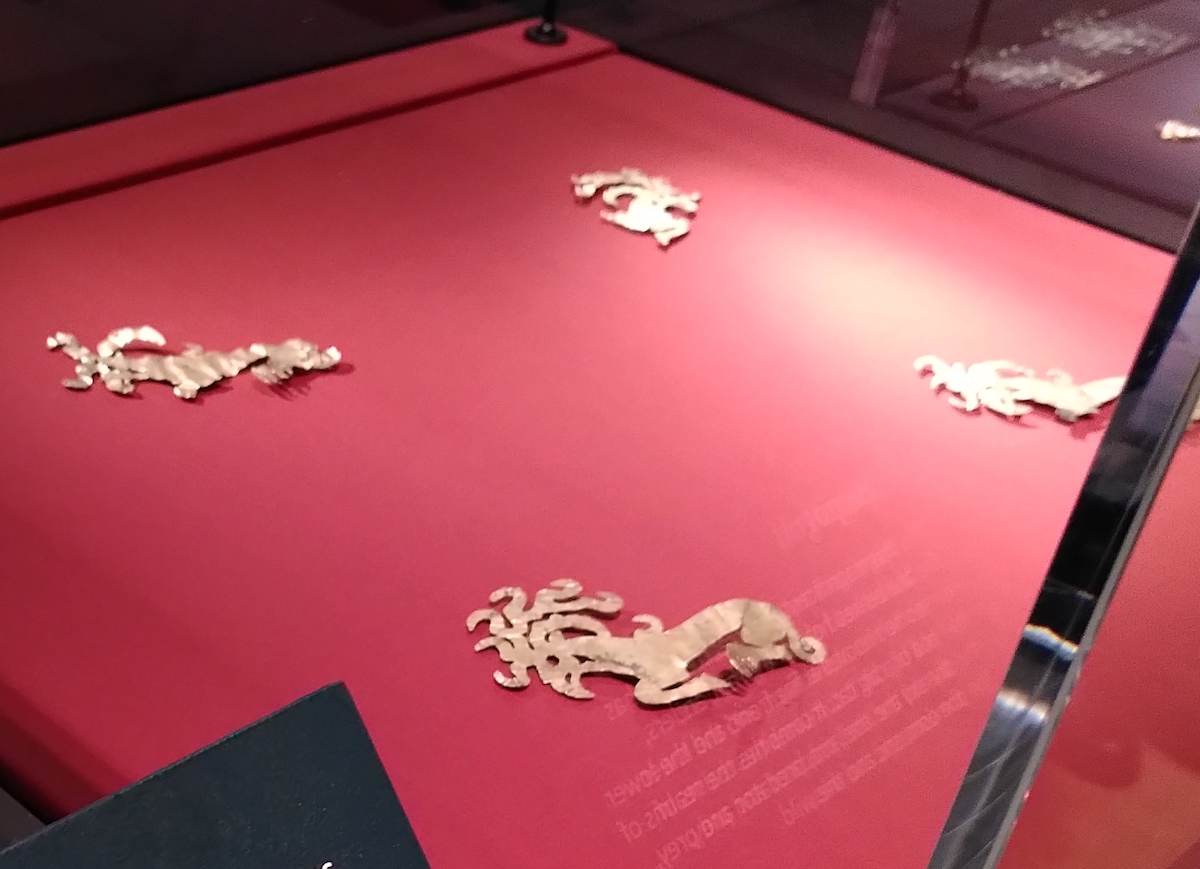 Decorative gold hippogriffs found in the burial chamber excavated in summer 2020. They have the head of a griffin, antlers, horses’ hooves and the lower half of a big cat. Saka art often depicts mythical creatures. (Image: Natalie Taylor) 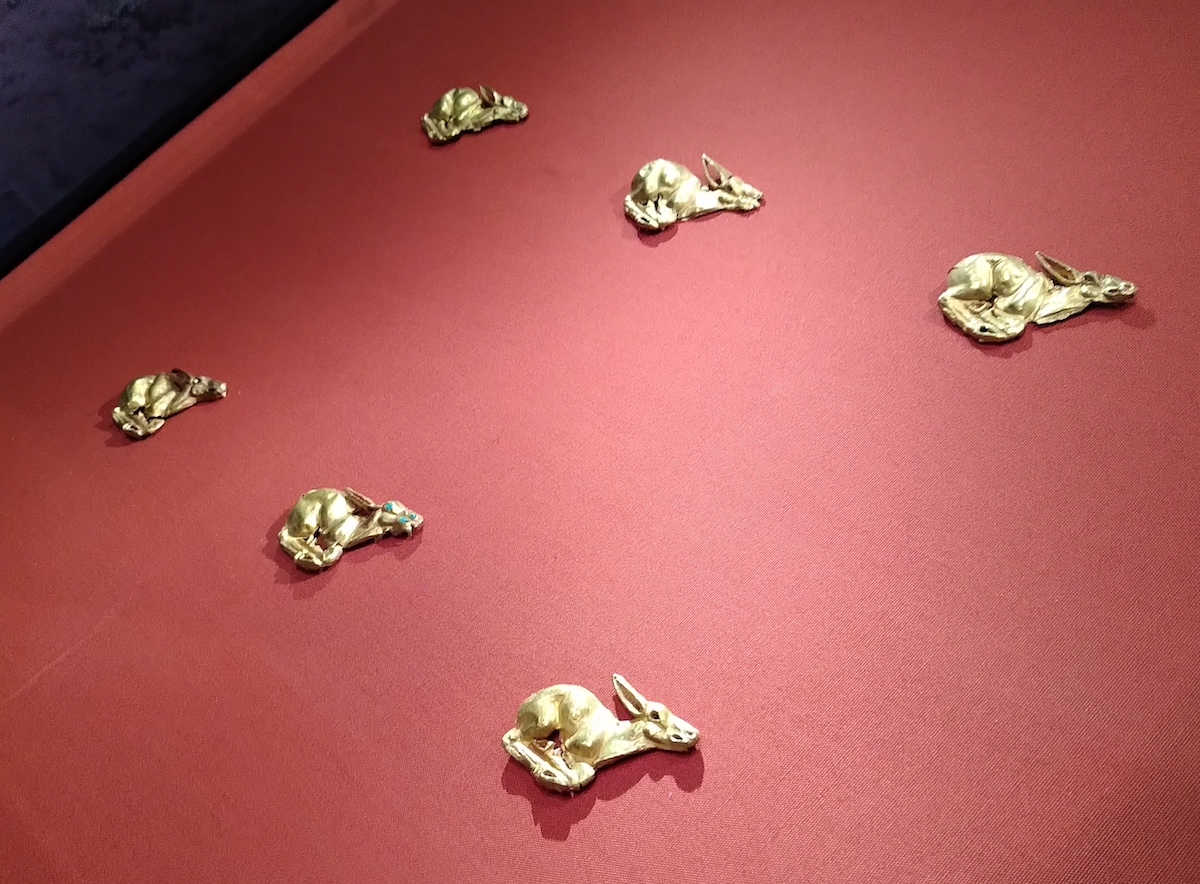 Deer plaques, which would have been sewn onto clothing, from the same chamber, among thousands of treasures preserved by the permafrost (Image: Natalie Taylor)

This is just the most recent of a series of sensational discoveries. Five years ago, the government of the East Kazakhstan region launched a large-scale programme to identify and excavate new archaeological sites. Many of the findings are now on display for the time at ‘Gold of the Great Steppe’, an exhibition in Cambridge, UK.

Who were the Saka?

The contents of the kurgans are hugely significant to scholars’ understanding of the Saka people and their culture. The Saka were nomadic and semi-nomadic pastoralists who dominated the eastern Eurasian Steppe (also known as the Great Steppe) for about 700 years, between 900 BC and 200 BC.

They spent their winters in the lowlands and moved their herds of sheep, goats, cattle and horses to upland pastures in the spring. Because of their nomadic way of life, and because they left no written records, relatively little is known about the Saka. What scholars do know is from the writings of other cultures: the ancient Greeks and Persians described them as ‘barbarians’. Under the Russian Empire and the USSR, Kazakhstanis were told they had no connection with the Saka. The burial chambers of their elite are their only permanent record – and are important in setting the record straight on the Saka’s skills, beliefs and aesthetics, as well as being an important strand of Kazakh heritage.

Before the current archaeological project, only one intact burial chamber had ever been excavated in Kazakhstan. In 2018, a second undisturbed grave was discovered. It belonged to a teenage archer. He had been buried in a kurgan with a young girl, thought to have been his sister. While her grave was plundered, his survived intact; part of the structure had collapsed, protecting its contents from looters.

A sumptuous sheath for a dagger, made from gold and lapis lazuli about 2,800 years ago. It was buried with a young archer who died no older than 18, in one of the kurgans at Eleke Sazy in the Tarbagatay mountains. The decoration depicts highly stylised deer and a feline predator. (Image © Fitzwilliam Museum)

In around 200 BC, the Sakas were driven from the steppe by the Yuezhi, another ancient nomadic pastoralist people originally from what is now Gansu province in modern China (the Yuezhi were in turn displaced by another tribe later on). Large numbers of the Saka moved south to the Ferghana Valley region, and then into parts of South Asia. Many settled in areas of modern Afghanistan, Pakistan and India, others in northwest and southwest China.

Kazakh archaeologists found millimetre-wide gold beads in their thousands, delicate broaches and glimmering plaques. The exhibition in Cambridge displays these tiny, intricate objects against pictures of the vast, rugged grasslands of the steppe, with the Altai mountains in the distance.

The mountains and rivers of the Altai region are rich in deposits of gold and other metals, which the Saka were among the first to mine. Metallurgy continues to be an important activity in the region, although on a scale that would be inconceivable to the artisanal Saka miners and goldsmiths.

Scholars believe that the Saka had a deep respect for the animals around them, and this was central to their art and belief systems. Among the excavated treasures, the animals of the steppe and the mountains are everywhere. Slender abstract shapes moulded from gold are identifiable as saiga antelope because of their characteristic short, curved snout. A tiny hole allowed them to be sewn onto clothing, where they created the effect of a herd of saiga running across the steppe. And where there are prey animals there are predators, with snow leopards and eagles unearthed alongside deer. 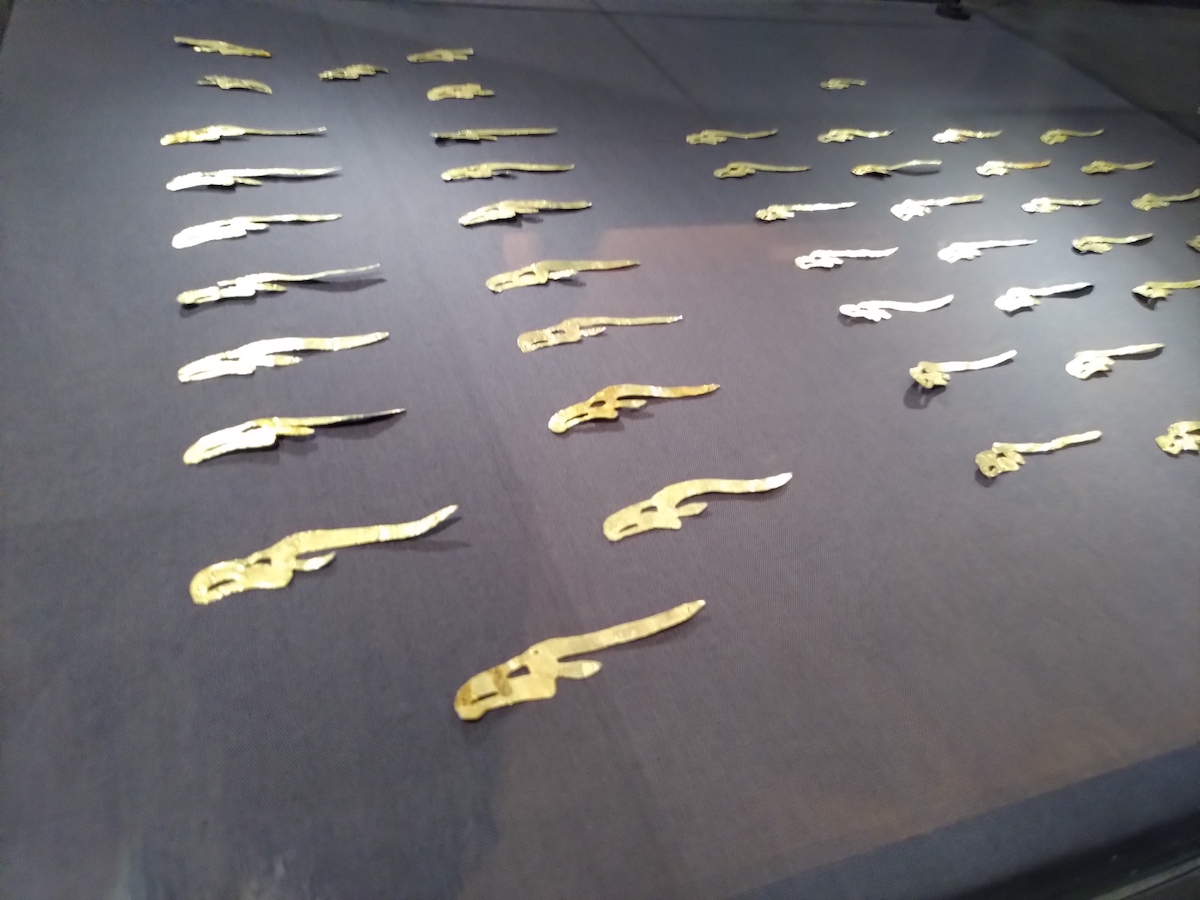 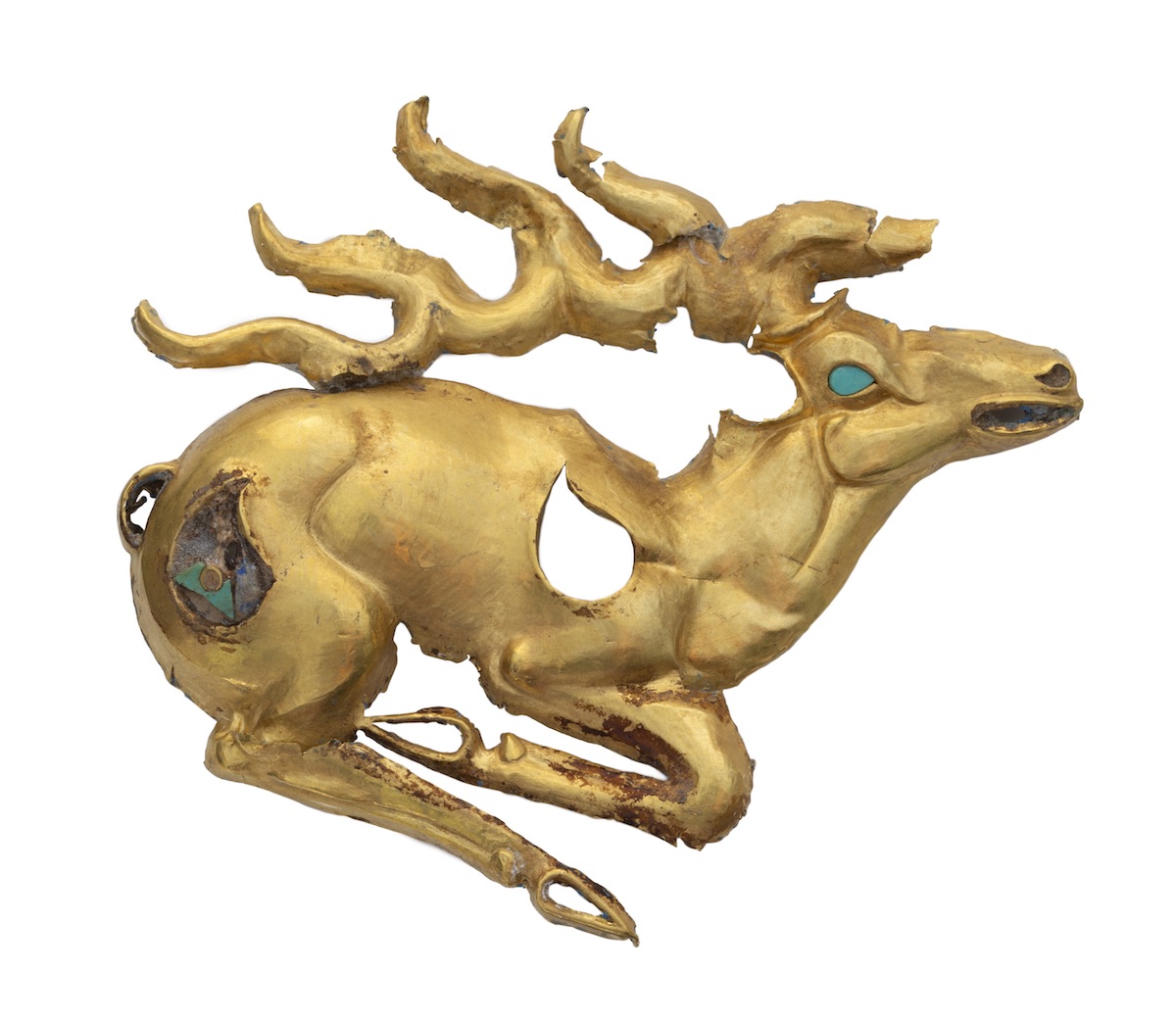 A plaque showing a stag in motion, made from gold, turquoise and lapis lazuli (Image © Fitzwilliam Museum) 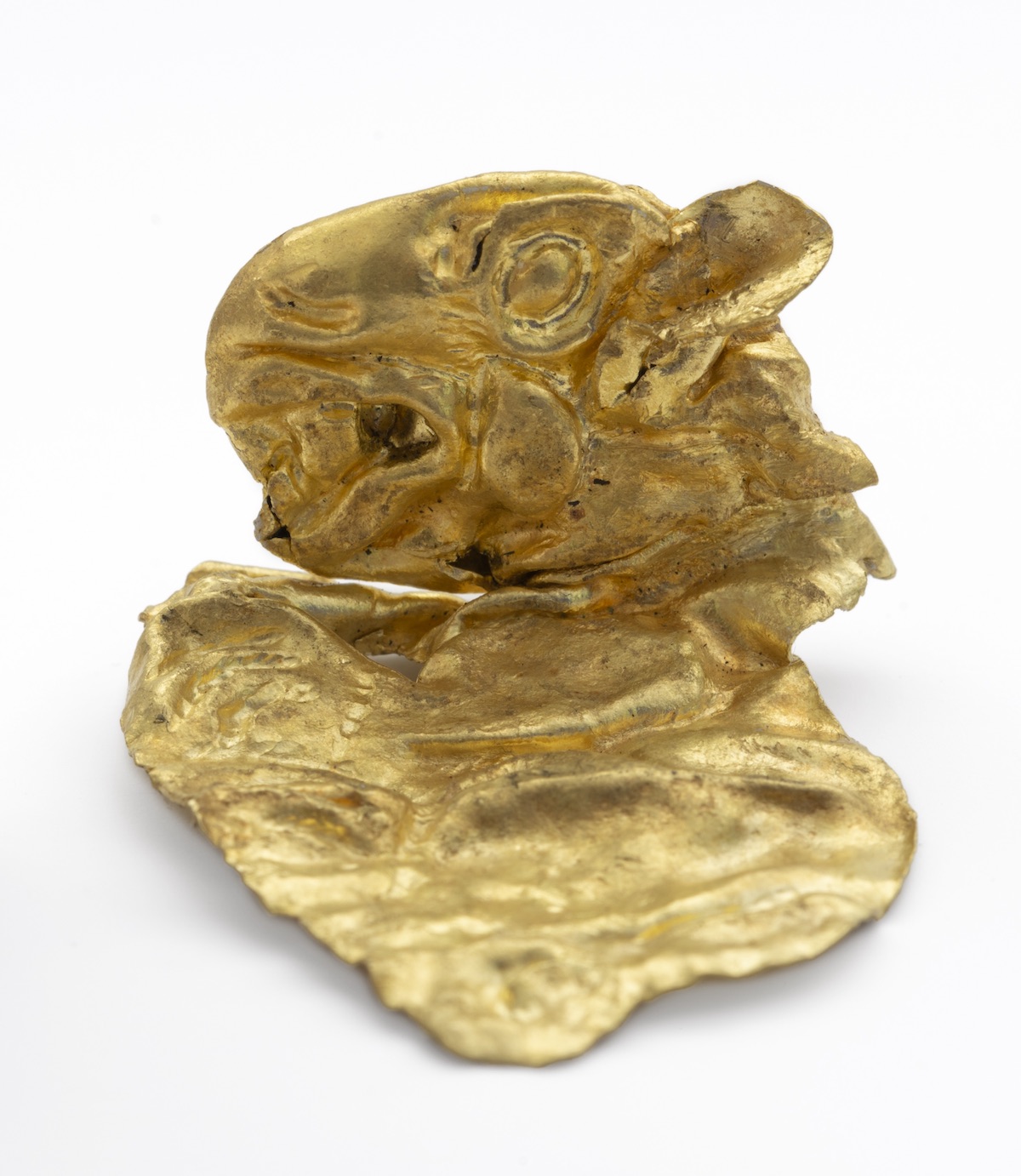 Researchers believe this is the snarling, poised figure of a snow leopard (Image © Fitzwilliam Museum) 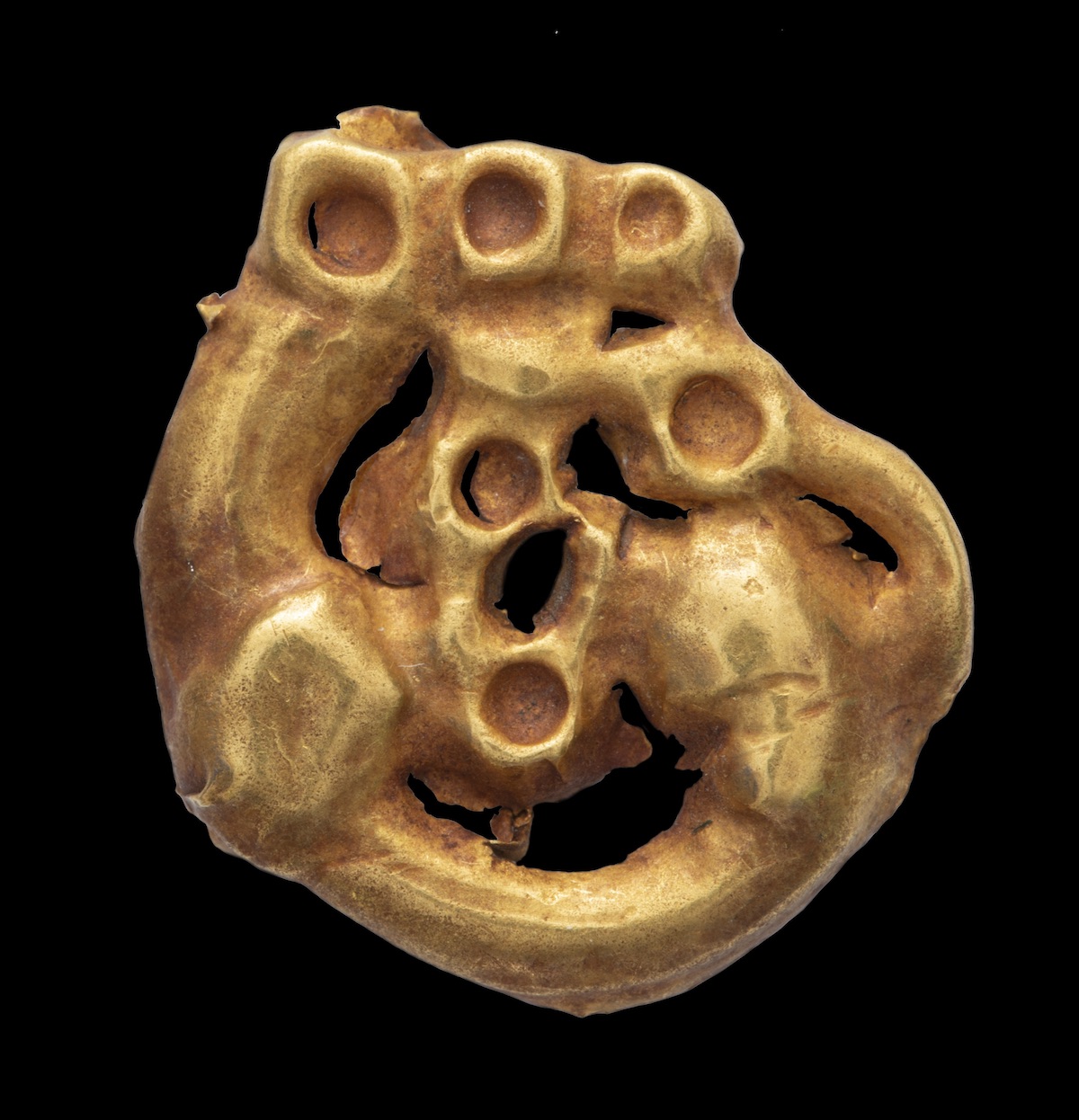 Melting permafrost a risk to treasures of Saka graves

Although not as obviously glamorous as golden jewellery and snow leopards, some of the most exciting of the recent discoveries are organic materials. Strands of hair, nail cuttings and lost teeth, collected throughout the dead person’s life, were buried with them. Fragments of material woven from wool reveal the Saka made fine cloth. A figure of a deer carved from wood and adorned with gold leaf reveals a multitude of skills beyond metalwork. Residues on grindstones show that the Saka cultivated and grew barley, wheat and millet.

These remains were preserved for over two millennia within the kurgans because of the specific climatic conditions in eastern Kazakhstan. Consistent below-freezing temperatures inside the burial chambers preserved the fur, wood, plant fibres and textiles within. 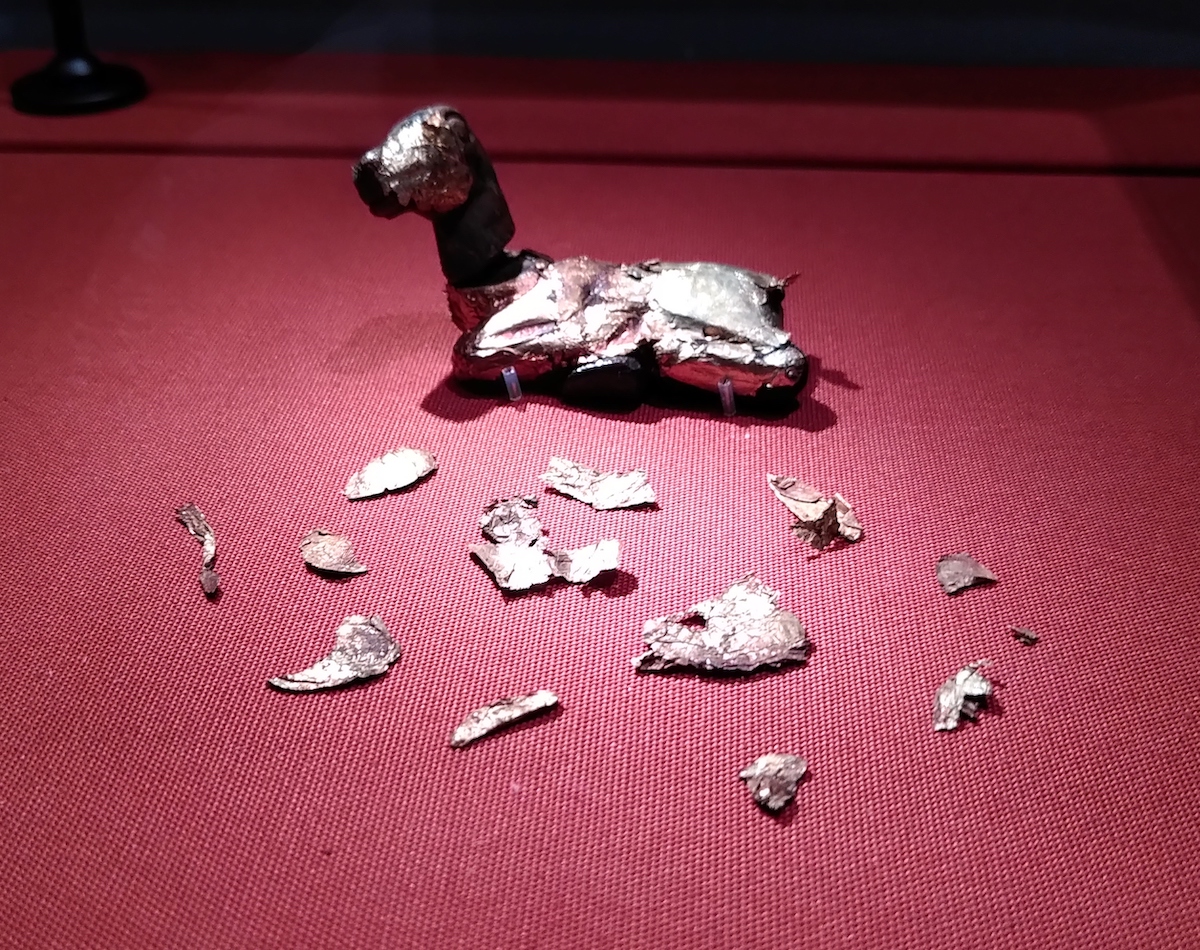 A carved wooden deer with gold overlay. The wood was prevented from decaying by the permafrost inside the kurgan. (Image: Natalie Taylor) 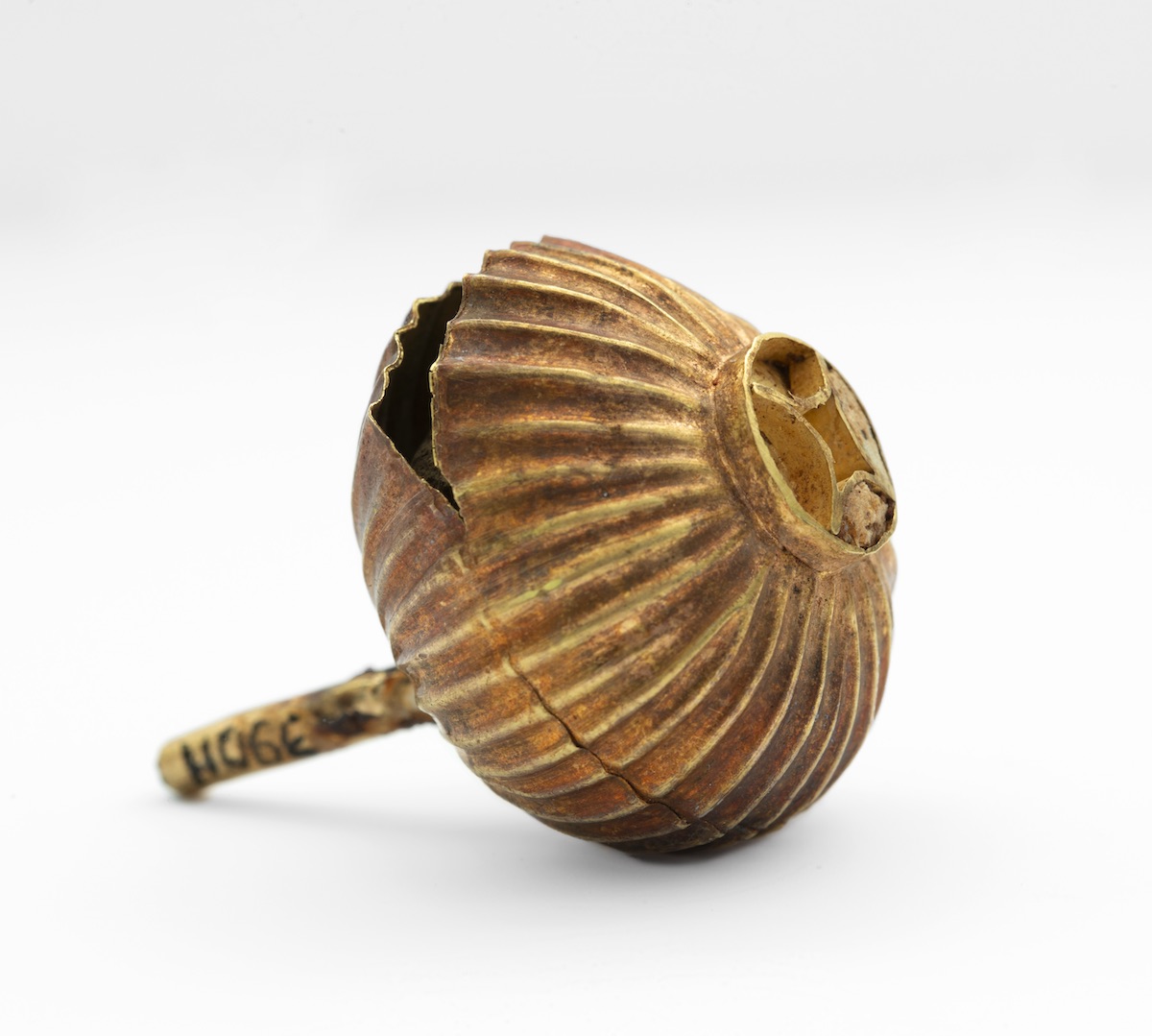 A hair pin in the shape of an opium poppy, buried with an elite Saka woman. A split in the gold indicates there may have been a real poppy encased within. (Image ©
Fitzwilliam Museum)

But according to the Intergovernmental Panel on Climate Change, Central Asia is warming faster than the global average. Since 2006, there has been concern among the international archaeological community about the preservation of the frozen kurgans of the Altai mountains.

Dr Rebecca Roberts, an archaeologist at the Fitzwilliam Museum and curator of the exhibition, said: “It is the permafrost that ensures so much material of great archaeological value remains preserved – materials such as wood, skin and leather can give us incredibly detailed information about the people and horses who were buried.

“With melting permafrost comes water and warmth: the two things that enable microbial activity to resume and break down these materials very quickly.”

In some cases, the warming climate can expose lost artefacts. New technology is being used in the Mongolian Altai to reveal objects in the melting ice. In addition, Dr Roberts said, ‘melted’ kurgans are much easier to excavate than frozen ones – “but at the cost of them being exposed to decay if not recovered quickly”.

She added that there are “many hundreds” of kurgans that have not yet been excavated by archaeologists – although the “vast majority” in Kazakhstan have been looted. “Rising temperatures are not the only threat to this precious heritage,” she said, pointing out that “thawed kurgans make much easier targets”.

‘Gold of the Great Steppe’ is at the Fitzwilliam Museum in Cambridge until 30 January 2022. The collection will then be returned to Kazakhstan, where the objects will be on public display. A virtual tour of the exhibition is also available here.

As the Ural river disappears, a crisis looms for Eurasia