Saju spread the nakshi kantha and drew on it all night

As if it was the poet of her secret pain

Nearly 100 years later, the “secret pain” that Bengali poet Jasimuddin wrote of in 1929 is still being stitched into nakshi kantha. This style of hand embroidery, traditionally on old saris, has been the medium through which the women of Bengal have expressed their joys and sorrows for centuries.

Shombhari, 60, has had no shortage of sorrows to depict in her needlework. “My name means that I am a wealthy woman,” she tells me. But, she adds, gesturing at the Jamuna River, “this river gulped all that once was mine”.

Three times in the past 20 years, the Jamuna has engulfed Shombhari’s home in Dokkhin Gilabari village of Jamalpur district in north-central Bangladesh. She moved to the bank on the other side of the river, which she says is now also about to collapse. There was a time when she earned some money by embroidering nakshi kantha, but her eyesight is no longer sharp enough. 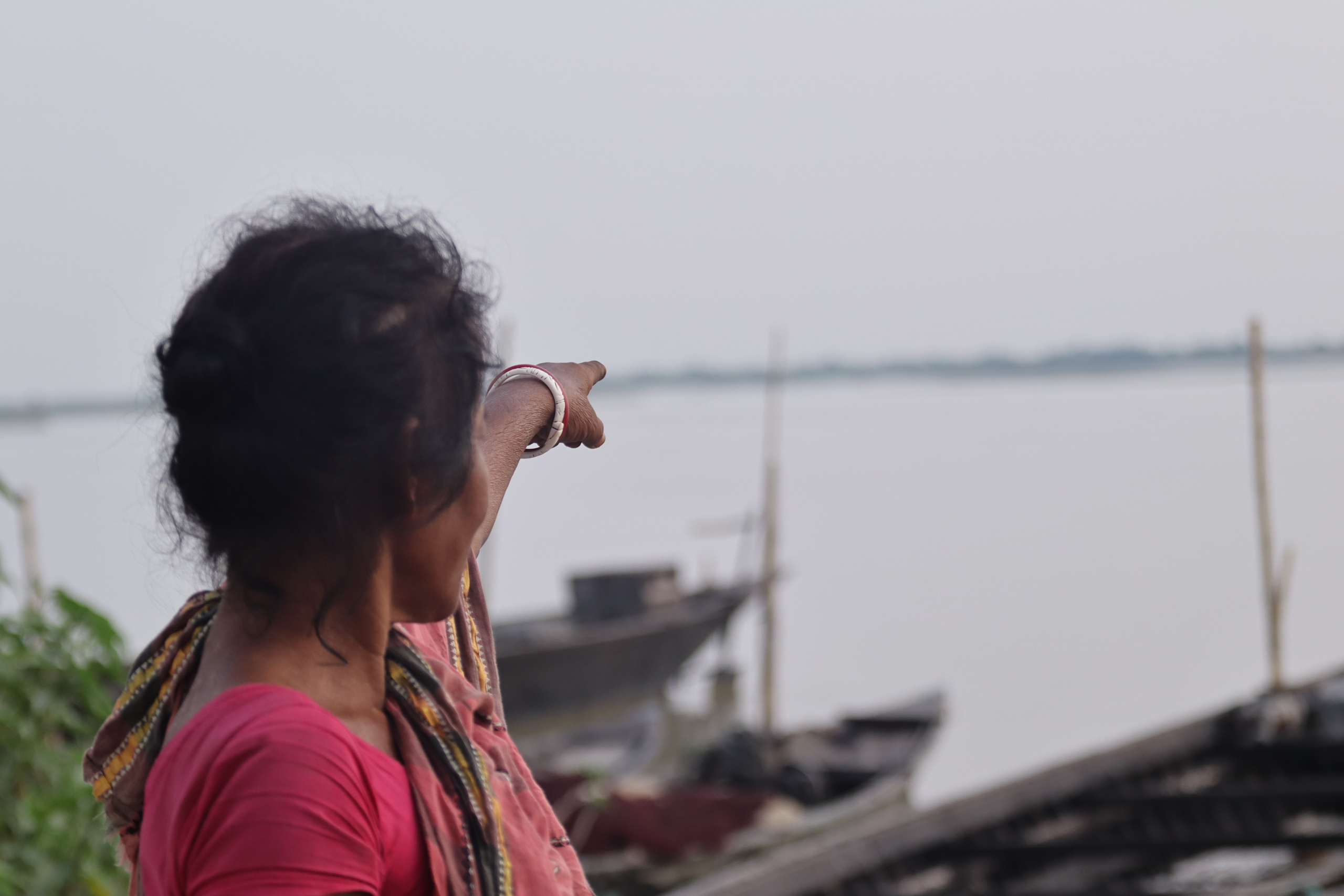 Shombhari points to where she used to live, which has been engulfed by the Jamuna River (Image: Nazmun Naher Shishir / The Third Pole) 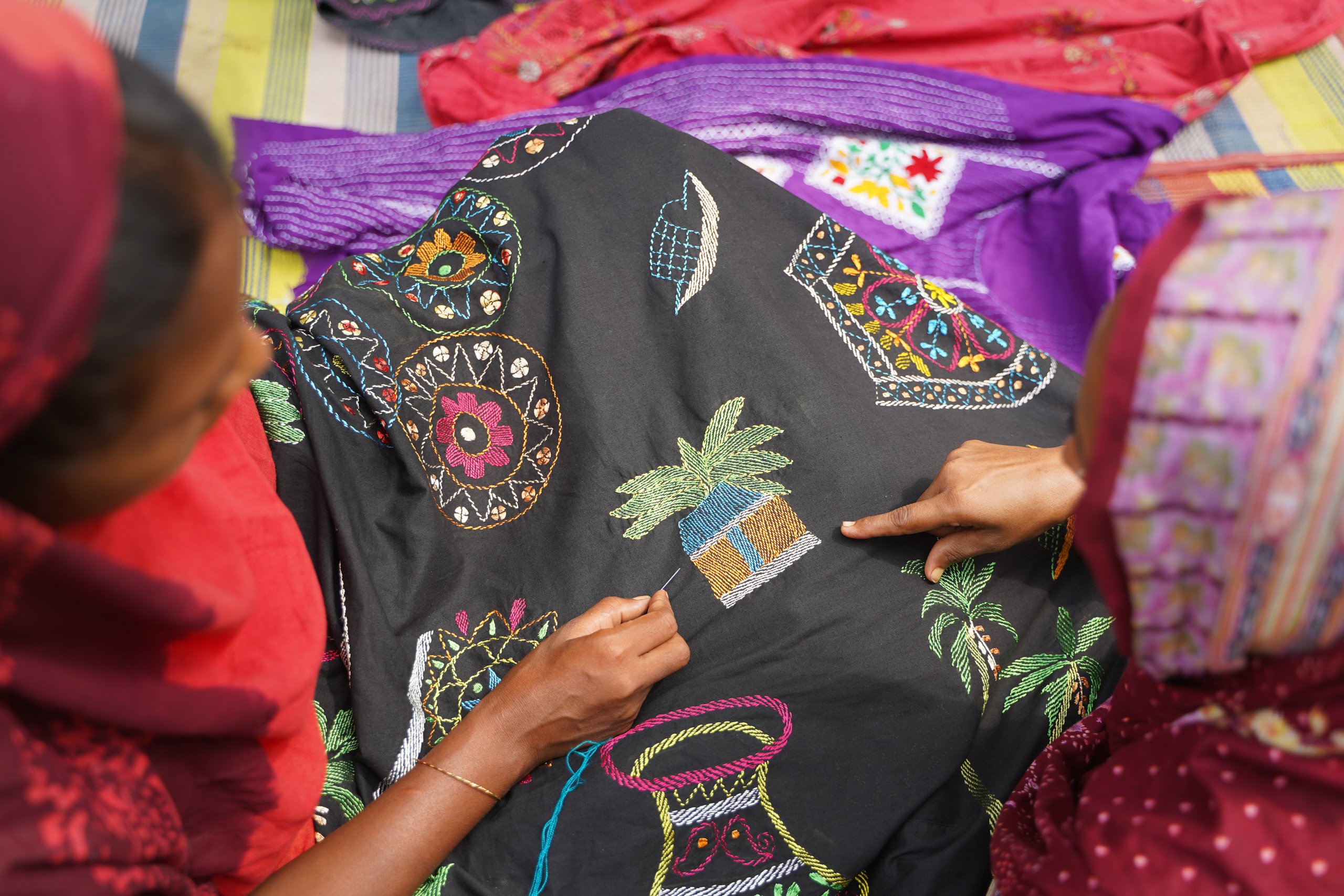 Women in Shombhari’s neighbourhood stitch the motif of a hut onto a modern nakshi kantha. The hut looks like one Shombhari used to live in, she says. (Image: Nazmun Naher Shishir / The Third Pole)

Women in rural Bengal, particularly those living on riverbanks and riverine islands, or chars, have been coming together for around 500 years to stitch their feelings of loss, longing and desire into nakshi kantha. Relatives, friends and neighbours would combine half-a-dozen old saris and spend their leisure time jointly embroidering the top layer to create these pieces of collective art.

They depicted what they saw around them. Traditional motifs included birds, boats, plants, snake charmers and farmers’ lives. Sometimes nakshi kantha would show the supernatural, as well as motifs from myths and religion. They also expressed the pain of solitary lives when husbands and sons leave for the city to earn a living – a theme that continues to this day.

As with all folk art it responded to the changing environment, and the creations were unique, evolving and imperfect – described as “lyrical embroidery” by Perveen Ahmad, a social activist, researcher and champion of the art form.

First, the group would spread out the saris, jointly deciding which would be the top layer. They would then pin the fabric together with long thorns plucked from the date palms found all over Bengal. Next, they would sew a long stitch around the edges to hold the saris together, which was to be removed later. A design, decided on by all the women would be drawn with a pen, pencil or a piece of chalk. Then the embroidery could begin. 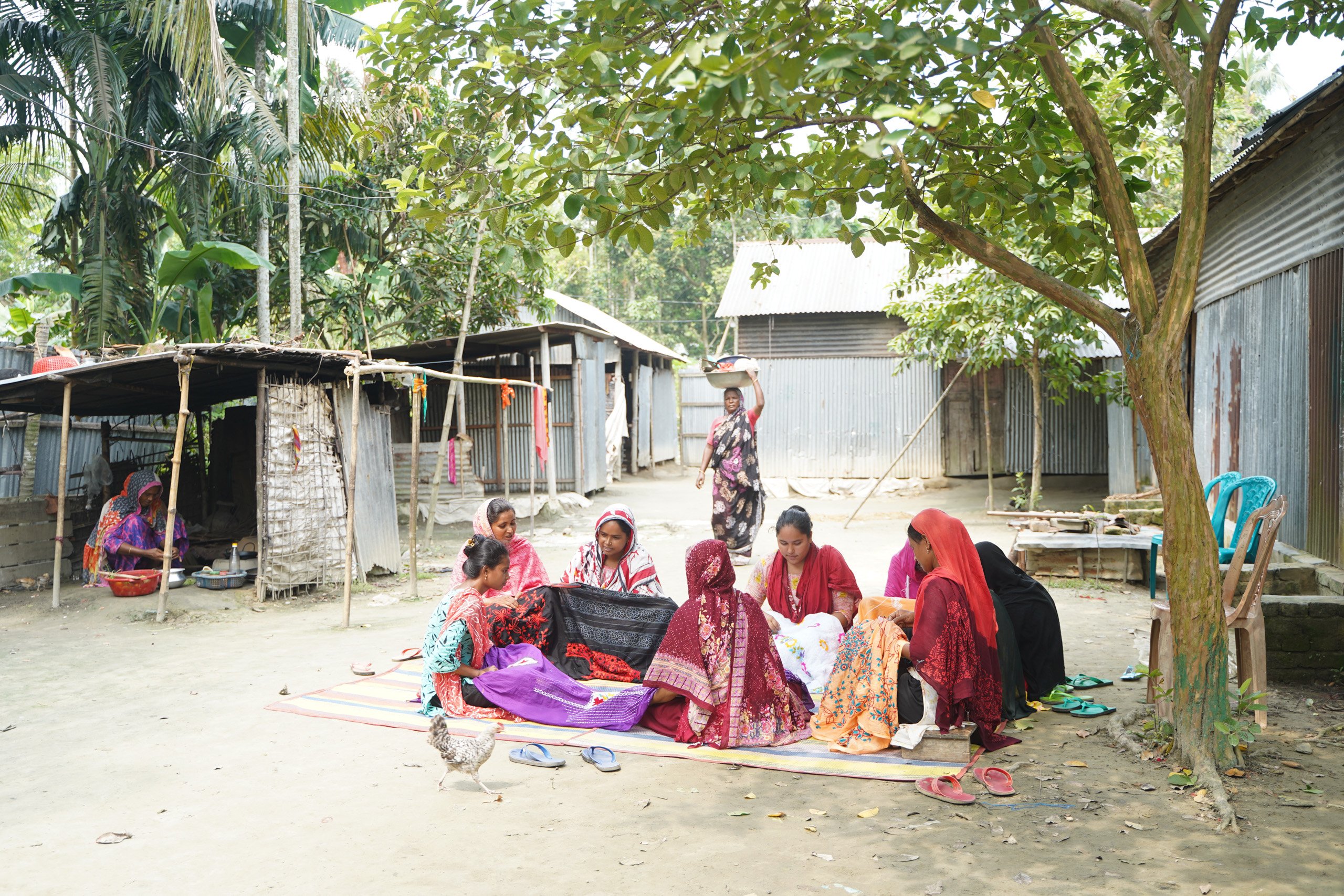 From cottage to commercial production

Younger women in Shombhari’s neighbourhood continue to practise this traditional skill, but it is changing.

Demand for nakshi kantha has grown quickly over the past 40 years – both among wealthy buyers at home and internationally. The designs are now found on a range of textiles, from saris and tops to curtains, bedspreads, tablemats and cushion covers. The Kumudini Welfare Trust, a charity that generates income through the sale of items including handicrafts, stated in 2021 that the market for nakshi kantha is worth about 120 crore Bangladeshi taka (USD 11 million) every year – and is growing by about 15% a year. The flourishing of organisations like Aarong, a social enterprise established by the NGO BRAC, and the Kumudini Welfare Trust has led to commercial production of nakshi kantha.

About 300,000 people are involved in the industry; of the artisans, 99% are women, according to AKM Azad Sarker, an officer at the Bangladesh Folk Art and Crafts Foundation, part of the Bangladeshi government’s Ministry of Cultural Affairs.

As I travel through Bengal for this story, many women tell me that they now earn enough from their artwork to be financially independent, with some saying it has even changed the power dynamics within families. 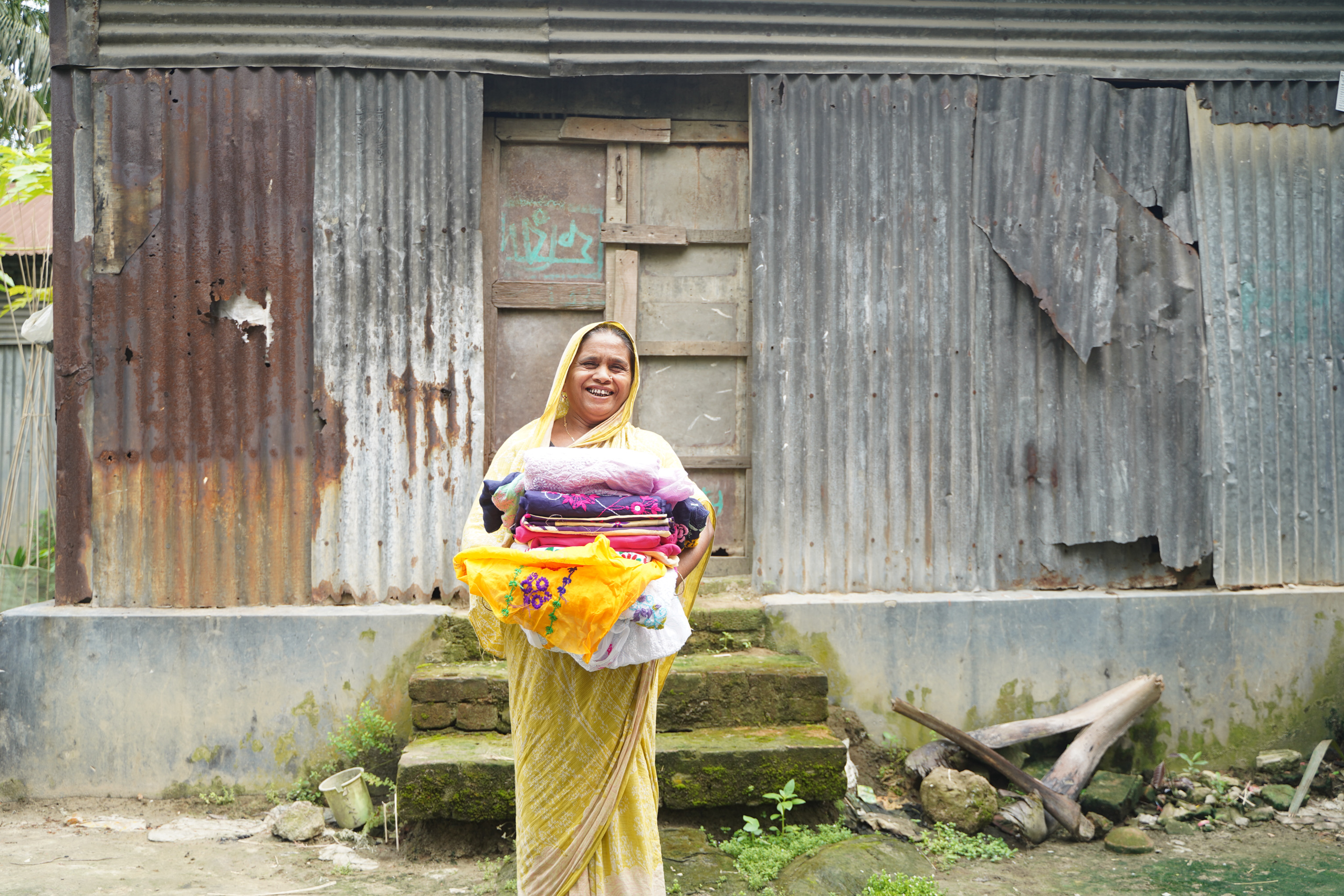 Sahera stands in front of her house showing off nakshi kantha pieces she has made (Image: Nazmun Naher Shishir / The Third Pole)

In Jamalpur, this has been possible for many women because they have a large regular customer. Aarong sources nakshi kantha through the Ayesha Abed Foundation (AAF), which has the second-largest production house in the district. In a year, it makes about 3,600 nakshi kantha, Shyamol Kumar Das, AAF’s senior centre manager, tells me.

“Women from rural areas work for AAF in 84 sub-centres all over Jamalpur district,” Das says, adding that the organisation also provides “medical and other facilities”. 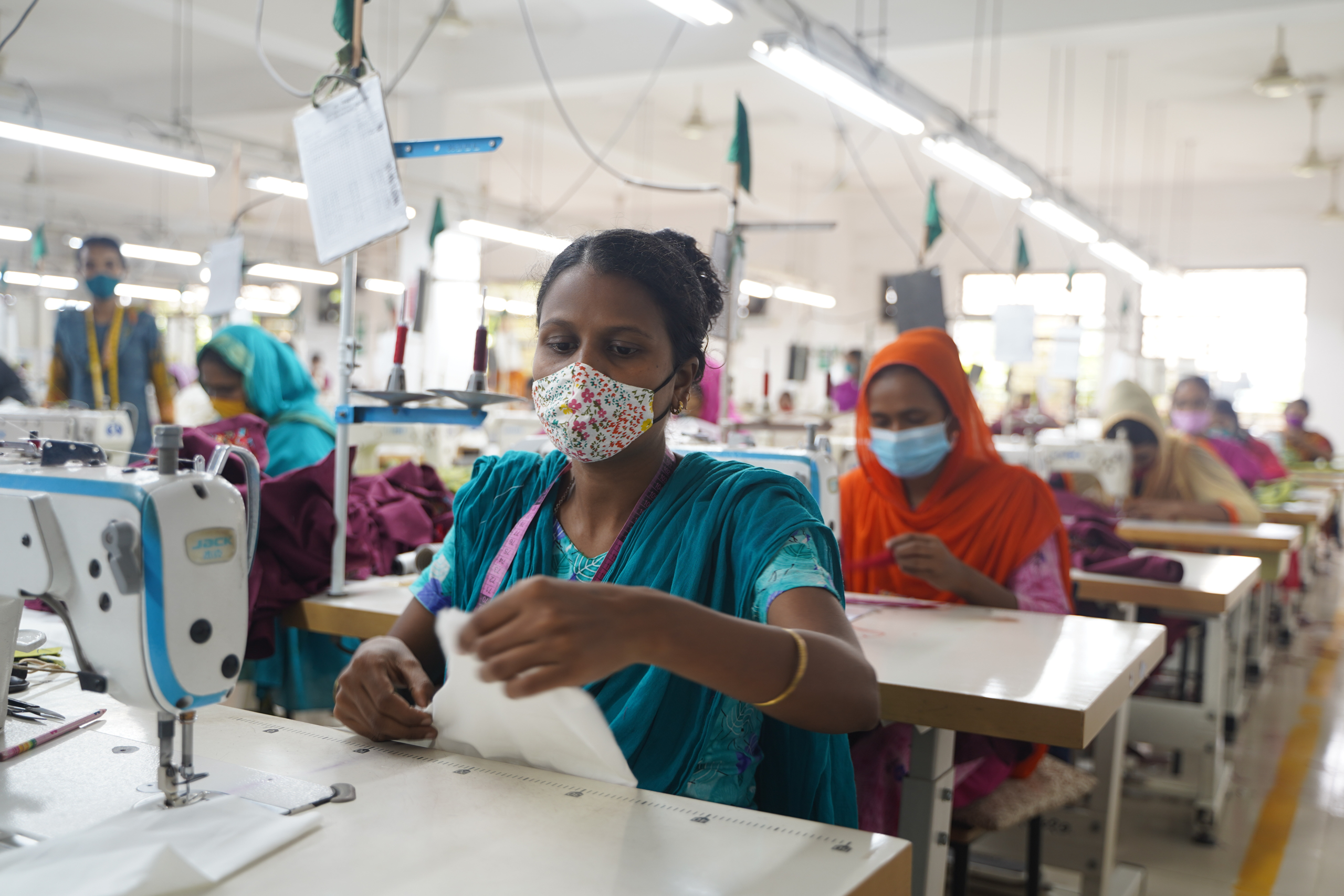 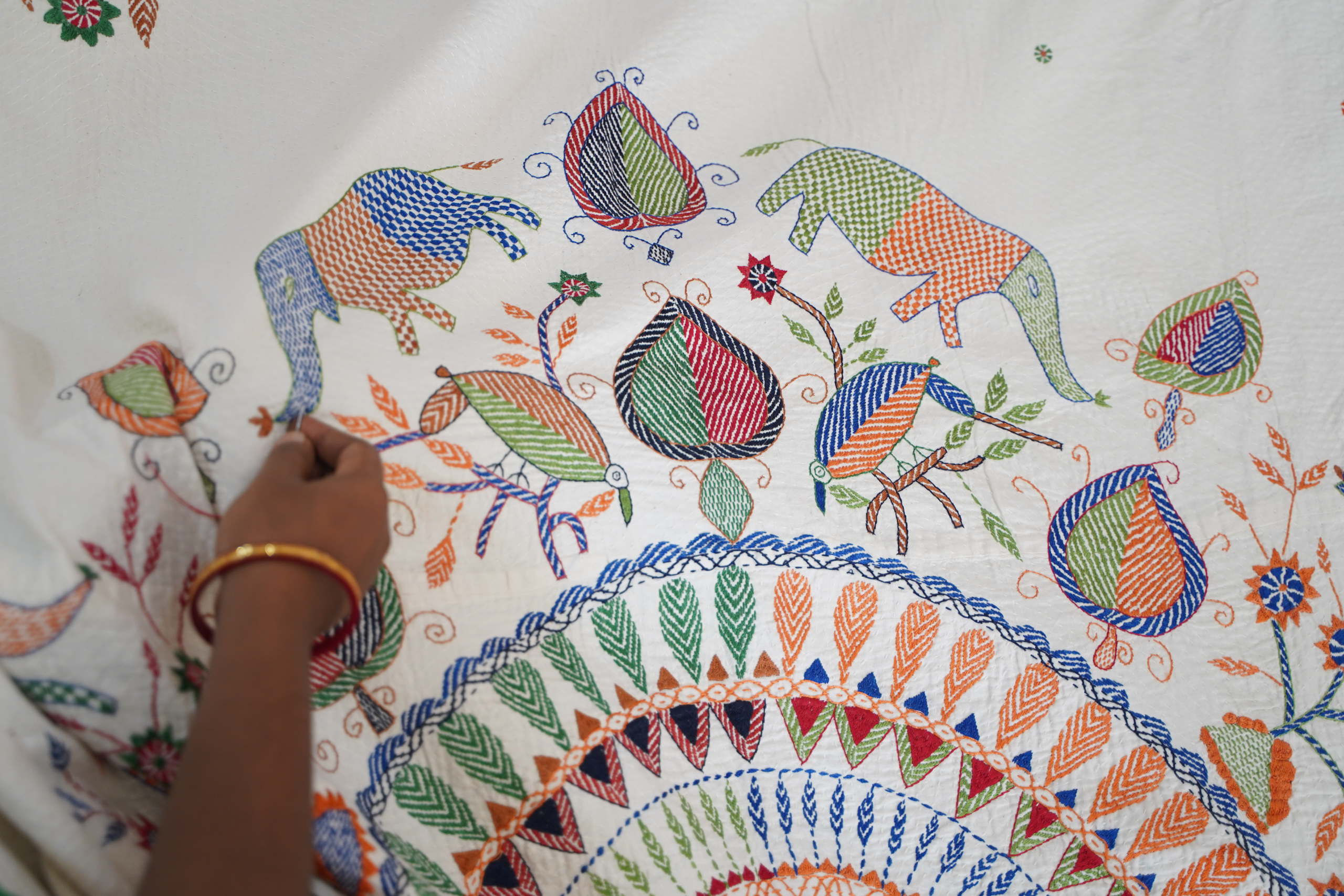 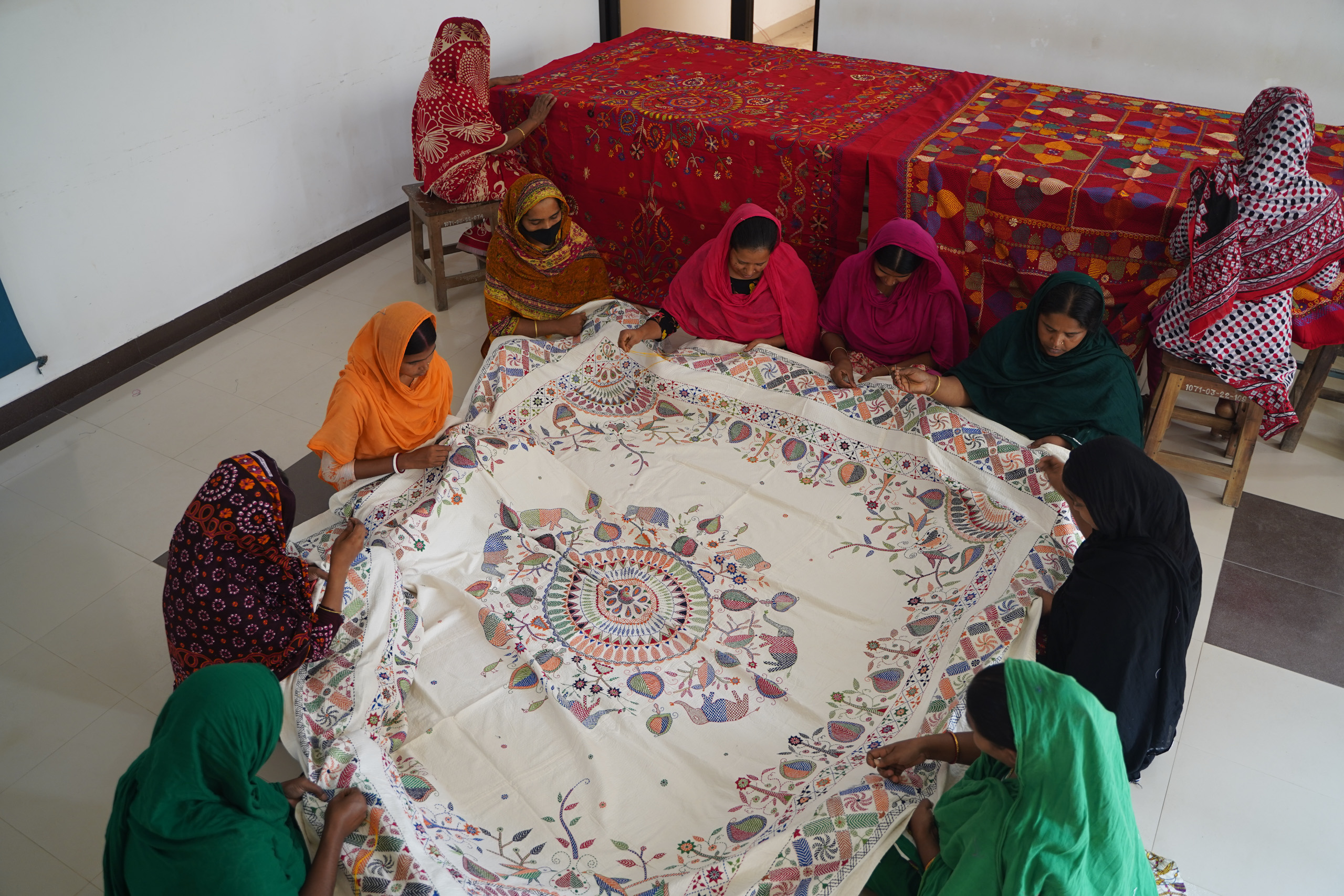 Women still work together on the embroidery, but they use new fabric and follow designs by professional artists.

As I visit groups in Jashore, Mymensingh and Rajshahi, I observe that they still work just as painstakingly.

Some nakshi kantha are so beautiful they are passed down as heirlooms. But it has never been easy to preserve cotton in the heat and humidity of Bengal. “Art like nakshi kantha does not sustain naturally in Bangladesh’s humidity. Our conservation processes are quite primitive,” says Shawon Akand, an art historian at Dhaka University.

And now there is another force separating people from their cultural heritage. More frequent and destructive floods due to climate change are forcing people to flee their riverside homes, and in the chaos many leave their heirlooms behind. 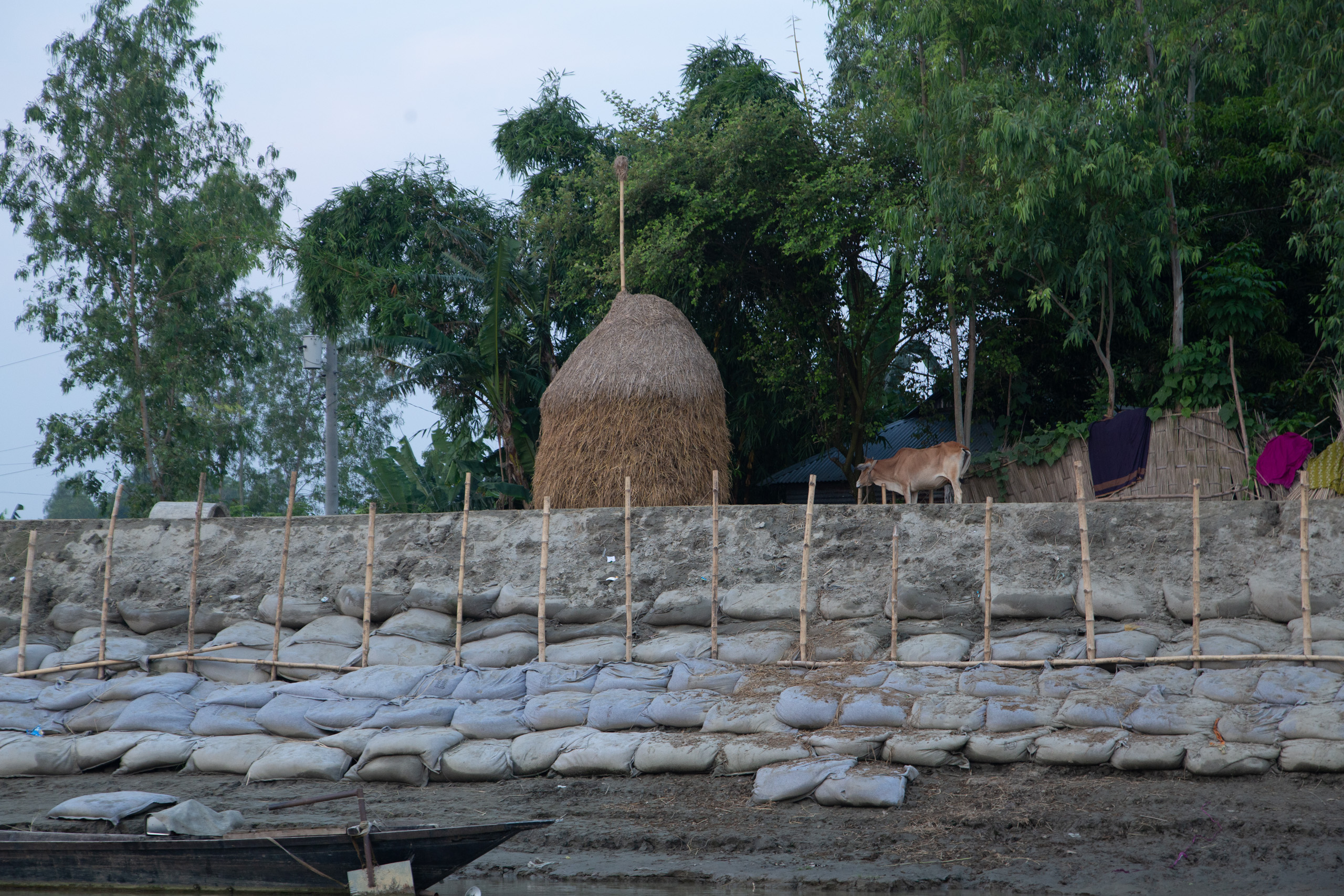 Sandbags are laid along a riverbank to protect a village from erosion (Image: Nazmun Naher Shishir / The Third Pole)

Kabita Begum currently lives on a river island in the Jamuna. In 2020 her family lost their home – also in Jamalpur district – to a flood, along with around 200 other families.

As a child, Begum watched her mother and aunts work on nakshi kantha in their spare time, which they used as wraps during winters. “My mother gifted me a kantha at my wedding,” she says. “I lost it 15-16 years ago, during another time when our home was flooded and we had to flee.” She remembers the motifs: a hut of the style her family lived in, a small boat, birds, a coconut tree and a banana plant.

Now the embroidery in the nakshi kantha also reflects the impacts of climate change – homes, land and cattle lost to the changing river; the pain of displacement due to floods. 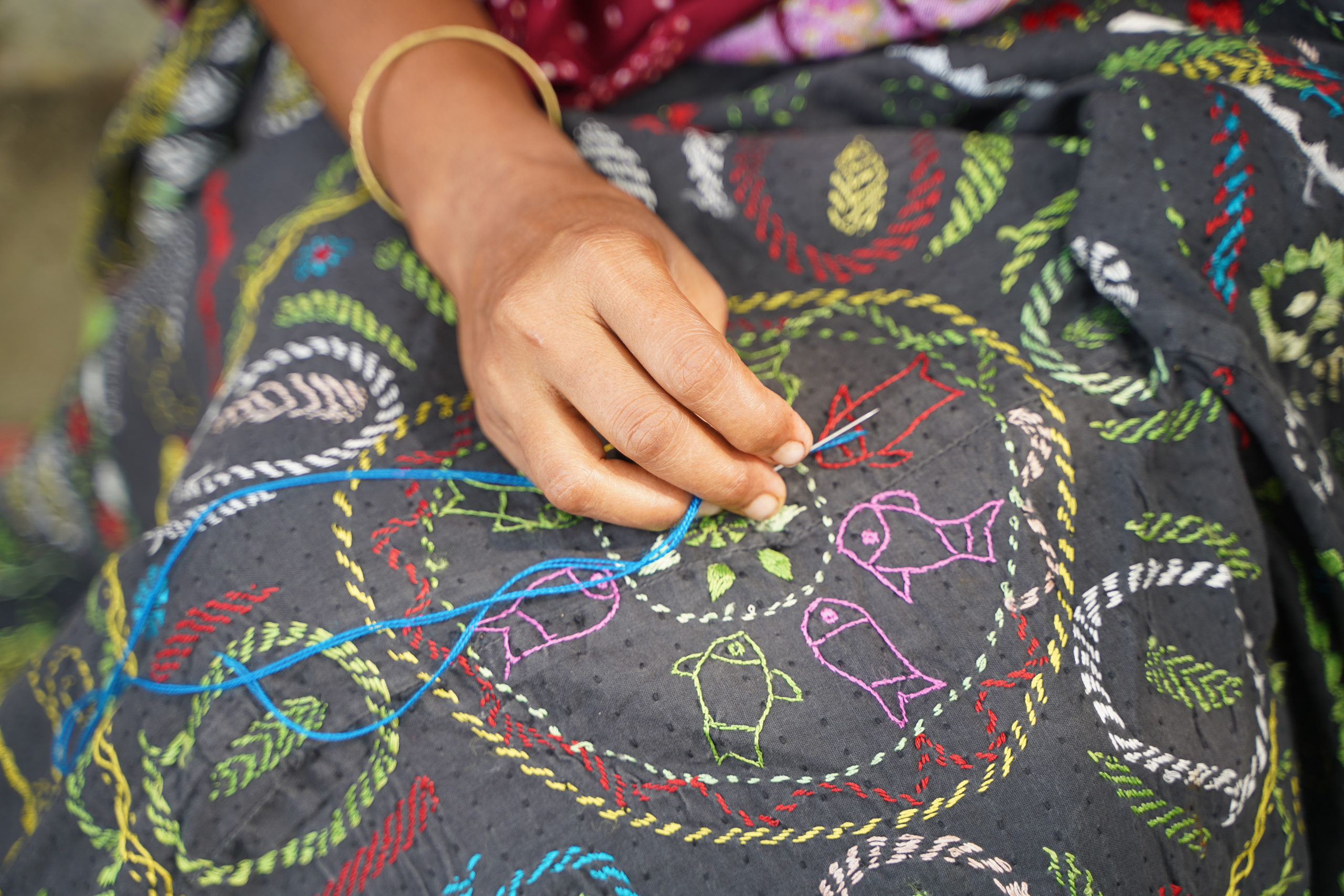 A modern nakshi kantha that mimics the style and motifs of the old art – drawing inspiration from the environment of the Bengal delta in Jamalpur district. Traditionally, nakshi kantha would not use new fabric, nor would the cloth be black. (Image: Nazmun Naher Shishir / The Third Pole)

Begum’s daughter and daughter-in-law now work in a group that embroiders nakshi kantha designs into salwars, tops, scarves and many other textiles. Their leader gets new fabric, thread, needles and other equipment from entrepreneurs, and sells the finished pieces back to them. Currently, they are paid BDT 300 (about USD 3) a day; they are negotiating with their leader to raise this to BDT 500 (USD 5) a day.

In the hope of finding a better life, Begum and some members of her family are planning to move to the city of Gazipur, where they hope to find better paid work in Bangladesh’s booming garments industry.

Art historian Akand tells me that the commercial production of nakshi kantha has led to some loss of its original charm as a medium of rural women’s storytelling – a sentiment echoed by women now working as commercial artisans and staff at nakshi kantha production houses.

With the focus on what customers in faraway cities demand, new designs have emerged. It has also meant the work cannot be slapdash or amateurish, and spontaneity has suffered, a number of entrepreneurs tell me. Techniques regarded as amateur, such as running stitch, cross stitch, simple and linear kantha stitch have become less common. 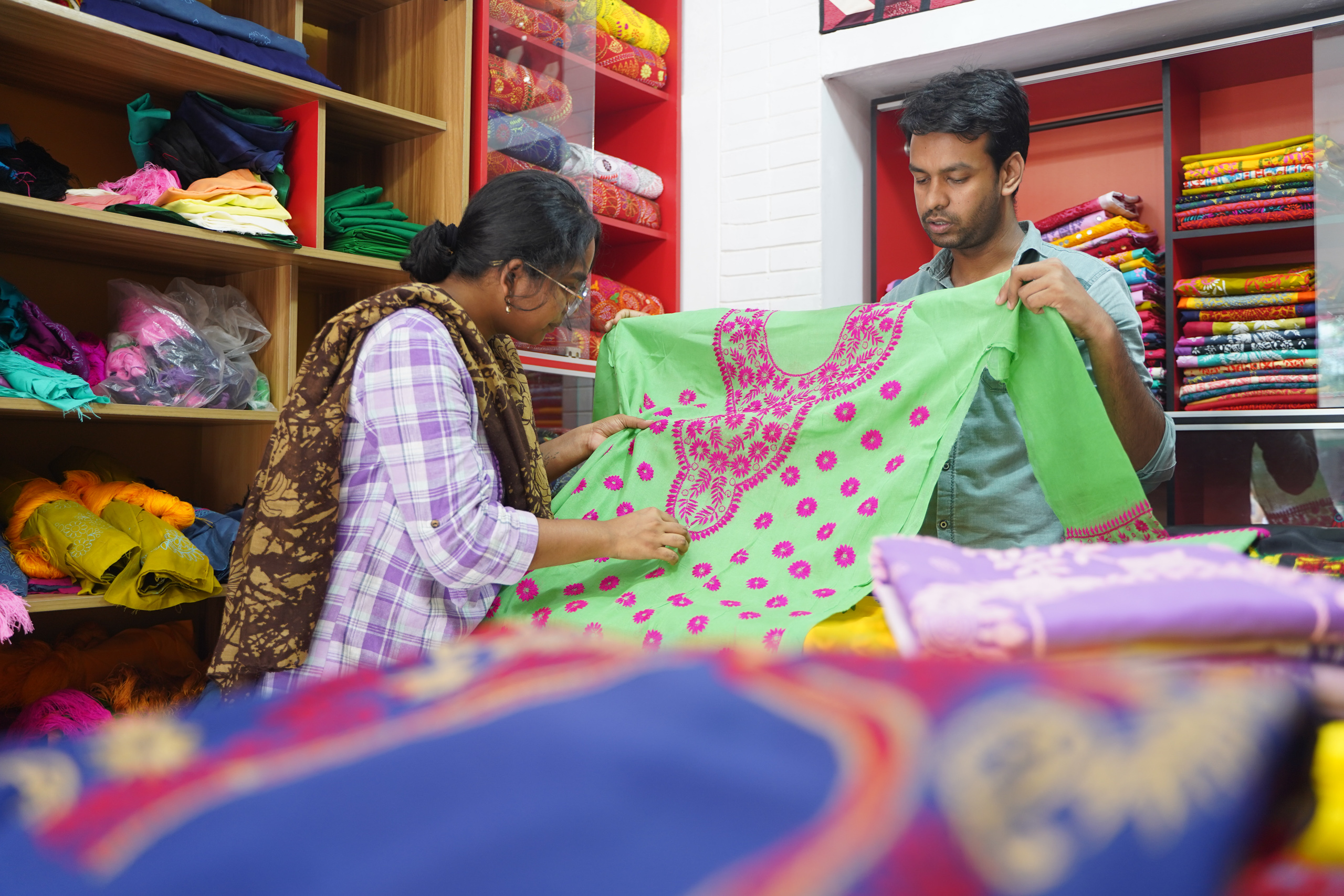 Sarker, the official from the Bangladesh Folk Art and Crafts Foundation, says: “Our organisation works on the preservation, collection, conservation and display of nakshi kantha. To keep a grip on tradition, we provide training on nakshi kantha stitches so that local women can be empowered.”

While buyers also demand traditional motifs, these do not allow spontaneity and artisans say they fear that a dynamic art form will become stilted.

Today, a few nakshi kantha are still being stitched non-commercially, documenting the present reality of erosion and floods, displacement and migration. I hope that these will be preserved for future generations.

Some names have been changed

Rising salinity threatens ‘the wealth of the world’ in Bangladesh