Millions of Hindu pilgrims have taken a dip in the holy Ganga in the past month, and millions more are expected in Haridwar, Uttarakhand for the next big dates of the Kumbh Mela festival – April 12, 14 and 27. Yet out of sight of the pilgrims, two Hindu monks are on hunger strike in an attempt to protect the holy, but increasingly threatened, river.

Swami Aatmabodhanand of the Matri Sadan Ashram began his hunger strike on February 23; he made it more rigorous on March 8 by renouncing water as well. On March 13, police took him from the ashram to a hospital, where he was force-fed through a drip. In protest, the head of the ashram Swami Shivanand Saraswati began his own hunger strike. He is now living on three glasses of water a day.

The monks are protesting sand mining and the construction of dams and barrages in the Ganga and its tributaries. These are the latest in a long series of hunger strikes in protest of damage wrought on the holy river. G.D. Agarwal of the Indian Institute of Technology, Kanpur, died on October 11, 2018, after a hunger strike of 111 days for the same cause. The 86-year-old hydrologist had changed his name to Swami Gyan Swaroop Sanand after joining Matri Sadan Ashram.

Other monks have been on repeated hunger strikes for years. Ashram authorities have alleged that one monk was poisoned while being force-fed in a hospital.

The current strike represents Swami Aatmabodhanand’s eighth for the sake of the Ganga. On his release from hospital on March 19, he restarted his hunger strike at once. “Matri Sadan has been working for the last 22 years for the health of the Ganga,” he told The Third Pole. “Three monks have sacrificed their lives for this. We are opposing dams in a sensitive area like the Himalayas. But the government does not care about those who love the Ganga and the environment. The government is close to those mining the riverbeds and building dams.” 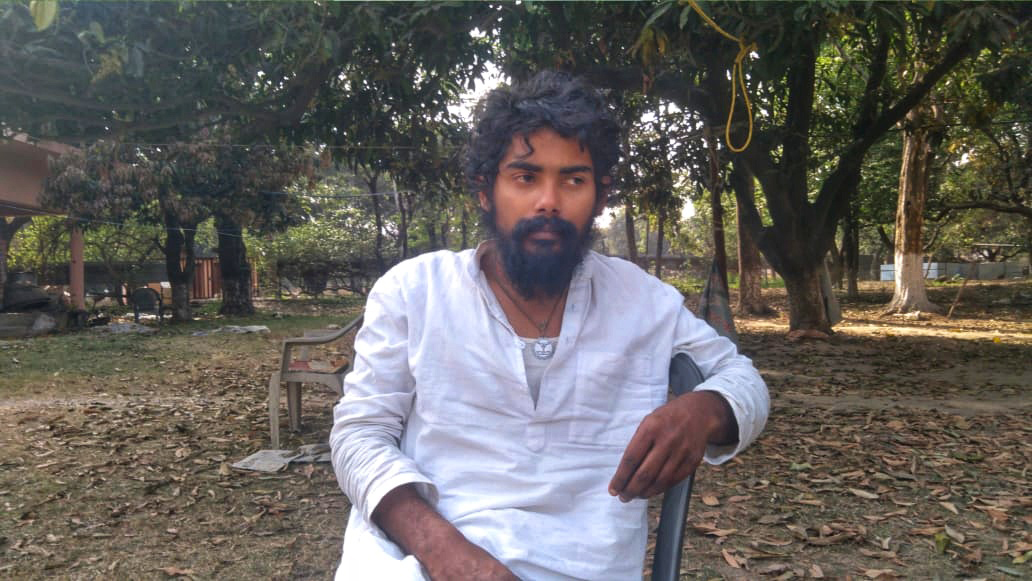 Swami Aatmabodhanand on his return from hospital on March 19 [Image by: Matri Sadan]

“The riverbed is being mined to kill the Ganga in Haridwar,” said Swami Shivanand Saraswati. “The river will regain its quality if you break down the dams, but mining kills the very nature of the river.” While there is little proof that the river is being intentionally destroyed, the destruction is undeniable, despite repeated judgements, including ones giving rights to rivers.

Showing The Third Pole letters from the prime minister’s office, Saraswati said, “They have acknowledged our protest and the concerns we have raised. India’s Jal Shakti [Water Resources] ministry has instructed the authorities in Haridwar to stop mining the Ganga in Haridwar. But the Uttarakhand [state] government is not ready to obey the instructions.”

Noted environmentalist Medha Patkar wondered in a recent tweet if anyone was going to listen to the monks.

The monks had started by protesting against the construction of the many dams and barrages upstream in the Ganga and her tributaries. Listing the projects, Saraswati said the central government’s National Mission for Clean Ganga “had promised us that they would close down four projects [dams] – Tapovan-Vishnugad, Tapovan-Pipalkoti, Singoli-Bhatwari and Phata-Byung. But when the flash flood came down the Rishi Ganga [in Uttarakhand, on February 7], it was found that work on the Tapovan-Vishnugad hydropower project was going on. The government did not listen to us; nature did.”

A female monk, Sadhvi Padmawati, was sitting in a wheelchair while the head of the ashram was speaking to The Third Pole. On March 25, 2020, she returned to the ashram from the All India Institute of Medical Sciences (AIIMS) in New Delhi. She cannot walk and can barely speak. Doctors have said she has a neurological disorder.

Saraswati said 25-year-old Padmawati did not have any such problems when she joined the ashram in 2017 following a bachelor’s degree in philosophy. On December 15, 2019, she began a hunger strike, demanding a stop to riverbed mining and the building of dams on the Ganga. Close to midnight on January 30, 2020, the police arrested her and took her to hospital, a process which was captured on video. On February 17, she was moved to AIIMS in New Delhi.

A little over a month later, Padmawati returned in a wheelchair. Saraswati said she has been unable to speak clearly since a pipe was inserted into her throat.

Asked if she will go on a hunger strike again for the sake of the Ganga, Padmawati nodded. 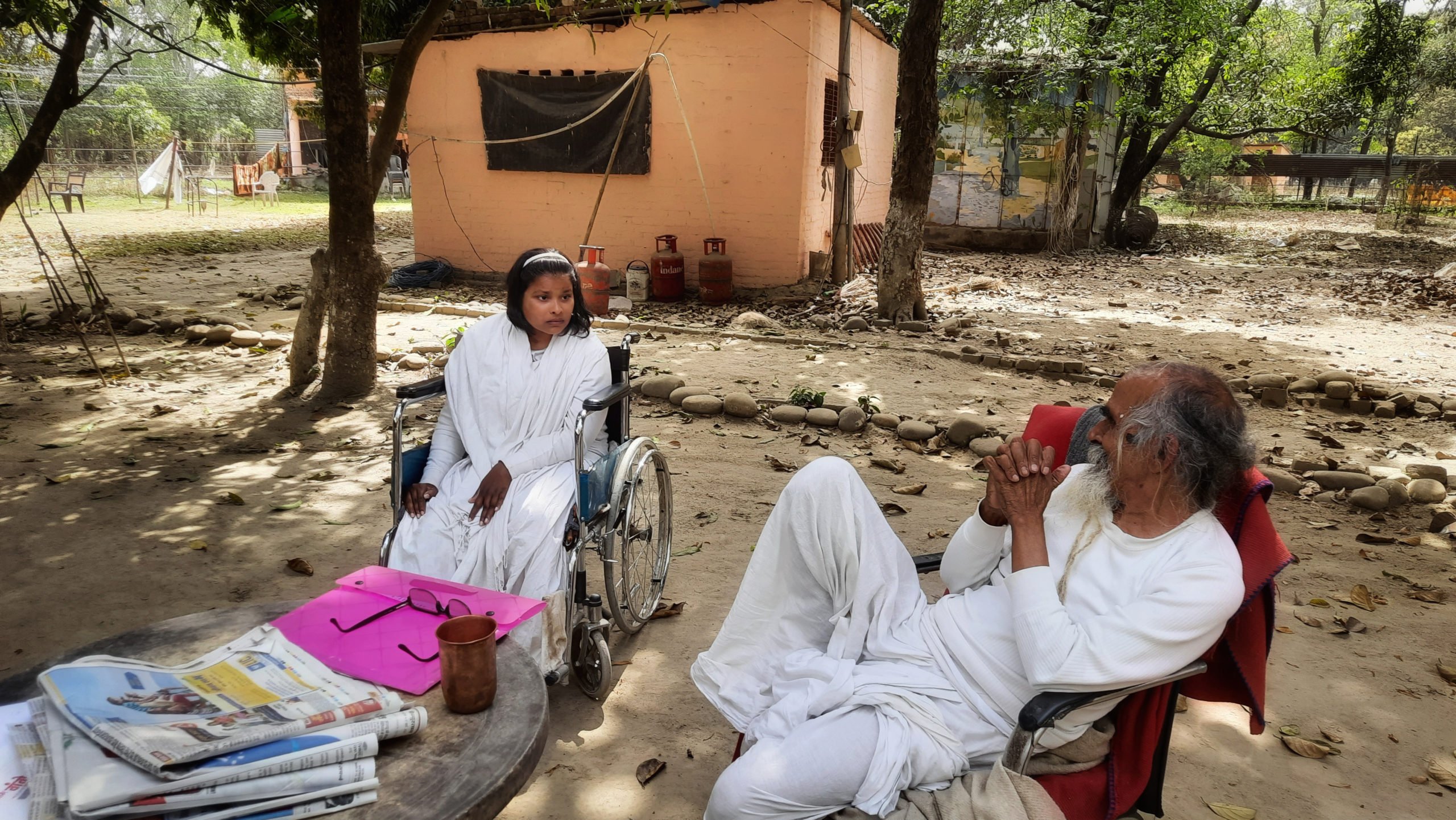 Support from the clergy

While the vast majority of those crowding the banks of the Ganga for a holy dip may not be aware of what the monks of Matri Sadan Ashram are doing, they have received support from senior figures in the Hindu religious hierarchy. A follower of Shankaracharya Swaroopanand Saraswati visited the ashram on March 14 to express solidarity. A Shankaracharya is considered one of the top four figures in the Hindu religious order.

Support has also been heard from other water activists. Environmentalist Rajendra Singh, often called the “waterman of India”, said recently, “These are the people willing to sacrifice their lives for the Ganga. But the government doesn’t listen to people like us.”

The monks and other activists have four main demands: to stop all dams being built and planned on the Ganga and its tributaries in the Himalayas; to stop riverbed mining and deforestation along the Ganga in the Indian plains; to set up a council that will work to improve the health of the Ganga; and to pass a law to protect the river.

In 2014, a hunger strike led to orders banning riverbed mining in the stretch of the Ganga in and around Haridwar where the river descends from the mountains to the plains. India’s National Green Tribunal also banned illegal riverbed mining in the area in 2015. When the Uttarakhand government issued new mining licences in 2016, these had to be scrapped after another round of hunger strikes.

G.D. Agarwal was on hunger strike for long stretches in 2018. Uma Bharati, the central water resources minister at the time, went to Matri Sadan Ashram to meet him; Nitin Gadkari, another union minister, asked him over phone to end his hunger strike. But his demand for a dam-free Ganga was not met.

What’s more, on February 25, 2021, permission for riverbed mining was given afresh. Umesh Kumar Tripathi, regional manager of Uttarakhand Forest Development Corporation, says the decision was taken after receiving permission from the central government.

The National Mission for Clean Ganga (NMCG) had asked the Indian Institute of Technology Kanpur to study whether riverbed mining should be permitted in the Ganga in and around Haridwar. Rajiv Sinha, who led the study, told The Third Pole, “We have said sand mining cannot be permitted between Raiwala and Bhogpur [locations near Haridwar]. The area should have a sediment management strategy. There are stretches where the sediment should be removed so that the river can flow. Sediment load has increased due to deforestation upstream in the Himalayas. But there is a long stretch that passes through the Rajaji National Park. You cannot even touch the river there – there are some ecological hotspots.”

On September 2 last year, NMCG director Rajiv Ranjan Mishra wrote to Matri Sadan Ashram referring to this study and said the central environment ministry had been asked to reconsider its decision to permit riverbed mining in the area.

But the mining goes on.

Ascetics, environmentalists, and a forgotten Ganga

Cleaning the Ganga: an unholy mess