Despite the continuing threat from the Covid-19 pandemic, preparations for the Kumbh Mela, one of the largest religious gatherings in the world, are ongoing in the city of Haridwar. The central and state governments estimate up to a million people will visit the Kumbh a day, with the number climbing up to five million on the days of the shahi snaan, or royal bath. According to an officer of the Haridwar administration, 18 million took a dip in the Ganga on the shahi snaan during the festival of Baisakhi at Haridwar Kumbh in 2010.

Kumbh is celebrated four times in a 12-year period, in the cities of Haridwar, Allahabad (now officially called Prayagraj), Nashik and Ujjain. Due to the pandemic, this time the Kumbh has been restricted to 30 days from April 1 to April 30 instead of three-and-a-half months. The three days in which crowds of up to five million are likely to gather are April 12 (Somavati Amavasya), April 14 (Baisakhi) and April 27 (Chaitra Purnima).

Most people want to bathe at Har ki Pauri Ghat in Haridwar. Controlling the crowd here will be a big challenge for the Kumbh administration, with fears growing about the potential super-spreading nature of the Covid-19 virus during this event. 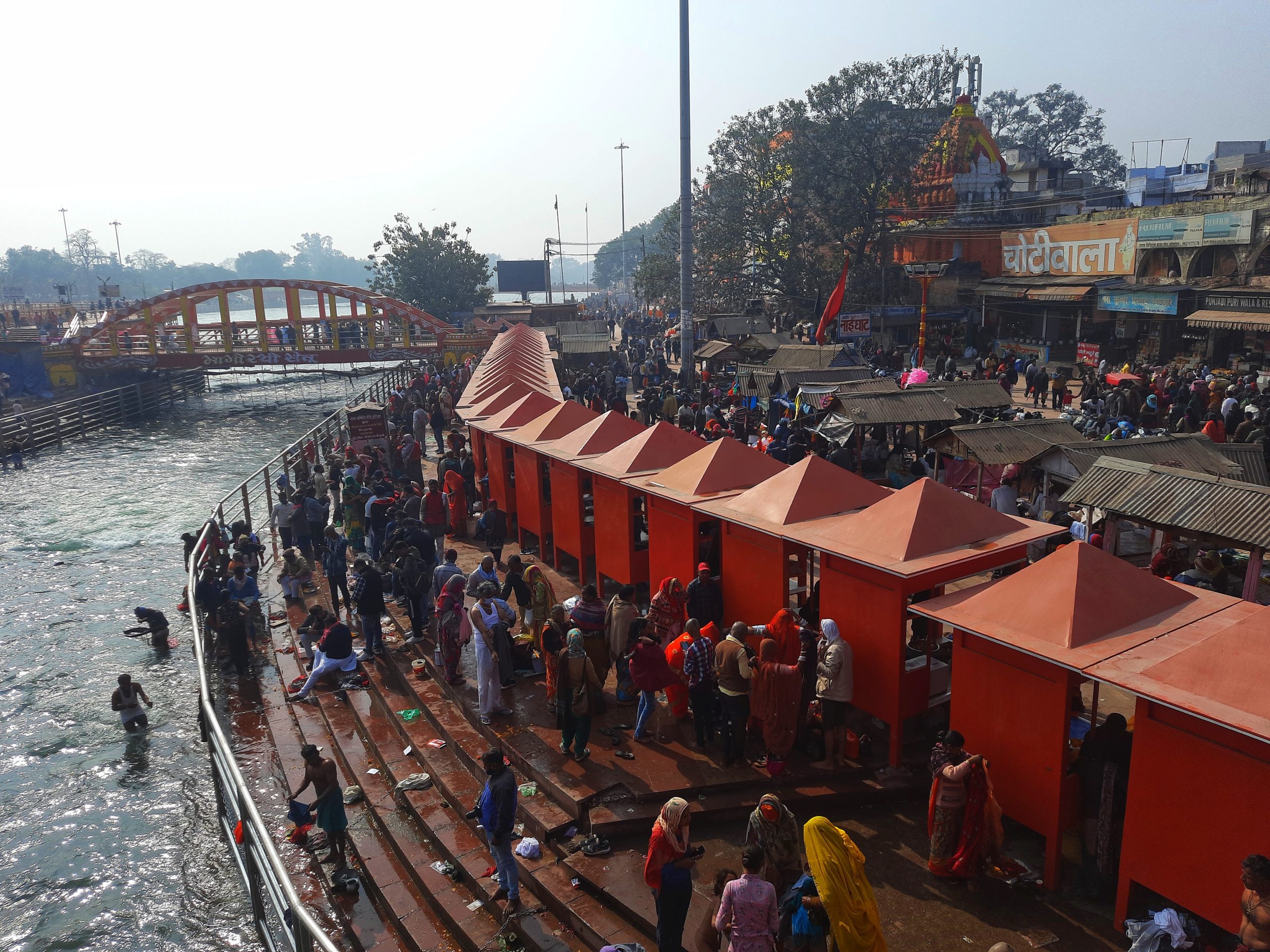 A view of the crowd at Har ki Pauri on a regular day. [Image: Varsha Singh]

The central government has offered help to the Uttarakhand government in training, risk assessment, surveillance and public health during the Kumbh.

According to the guidelines, everyone attending the Kumbh must bring a report of a negative Covid-19 RT-PCR test conducted less than 72 hours before entering the area. Registration will have to be done on the Kumbh website of the Uttarakhand government. People aged over 65, under 10 or with serious illnesses have been advised not to attend. Only vaccinated health and frontline workers are to be deployed at the Kumbh Mela.

Haridwar had a population of 1.89 million at the time of the 2011 census. This is less than half the number of people expected to visit on the days of the shahi snaans at the 76 ghats – riverside steps where rituals take place. Deepak Rawat, the Kumbh Mela officer in Haridwar, said people will be allowed to enter the city and festival area only if there is carrying capacity. “If we feel that the crowd is bigger, people can be prevented from entering the city or the fair area,” he told The Third Pole.

He added that 350 CCTV cameras have been installed around the fair area and that crowd monitoring will be done with the help of GIS-based software. An AI app will also show authorities where the crowd pressure is high and help with diversion.

According to Rawat, NGOs will be asked to spread awareness about Covid-19 prevention rules, especially on maintaining safe distances, the wearing and disposal of masks and washing hands.

So far, though, only 5,000 people were tested at the Narsan border in Roorkee before they entered Haridwar, according to local journalists. Siddharth Chakrapani, the official of the Ganga Mahasabha, which oversees the management of Har ki Pauri, said, “We can monitor whether someone is wearing a mask or not. But it does not seem possible to follow social distancing at bath time. People have to be aware on their own.” 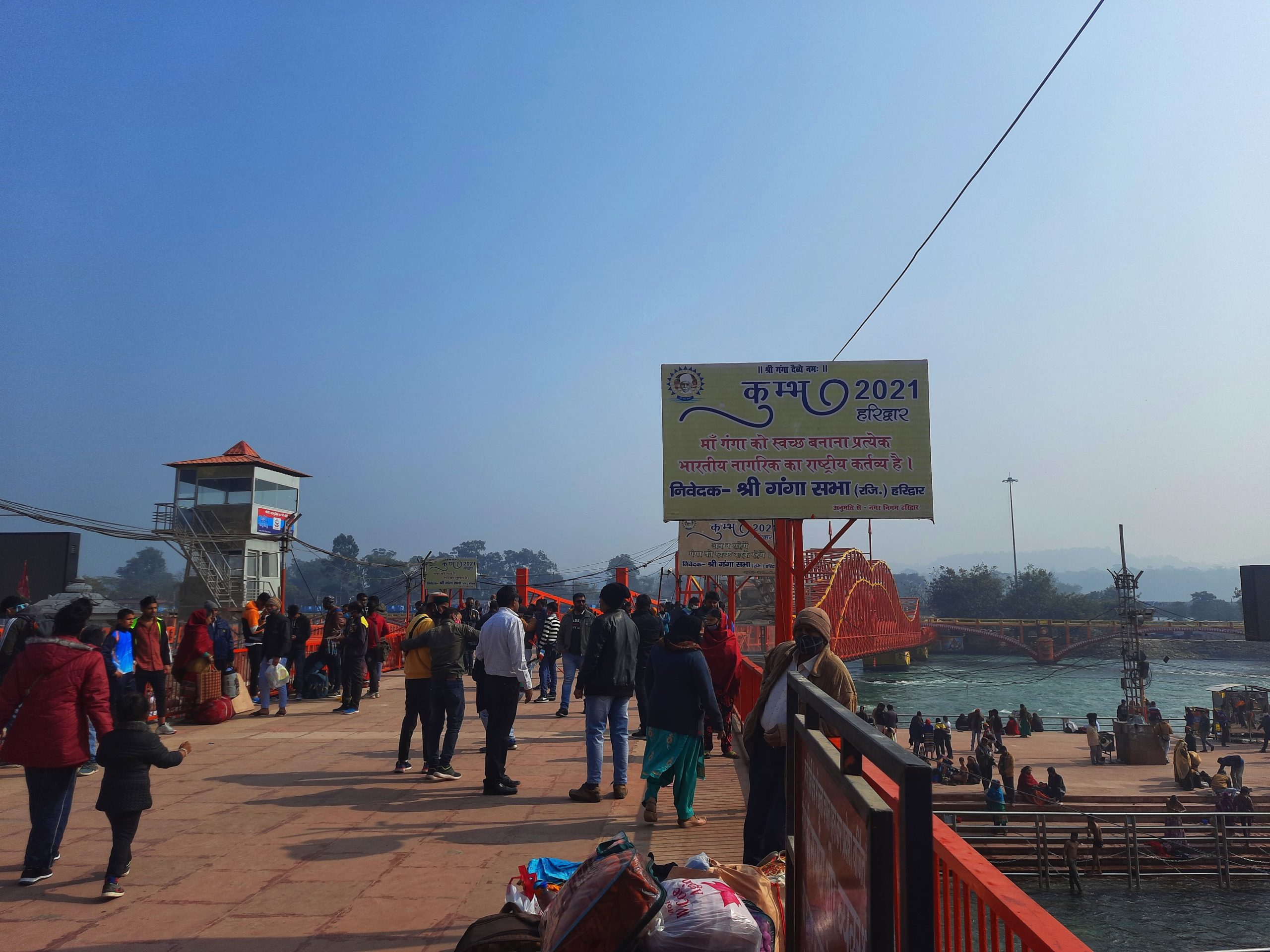 A sign welcoming people to the Kumbh Mela this year. [Image: Varsha Singh]

Swami Shivanand of Matri Sadan Ashram, Haridwar, a monk and activist who has been raising awareness about the state of the Ganga, said that time is slipping away. Till now there has been no arrangement for camps for the akharas, ashrams and other religious institutions where most visitors stay.

Much of this delay has been because of the uncertainty about the Kumbh due to the pandemic. Shivanand fears that the crowds may arrive before the living arrangements are completed. The mass of people has already reached points of overflow and no system is visible to them.

The additional district magistrate of Haridwar, Harvir Singh, explained that the decision on where the tents are to be set up is yet to be made. The website for the registration of visitors is also still a work in progress. 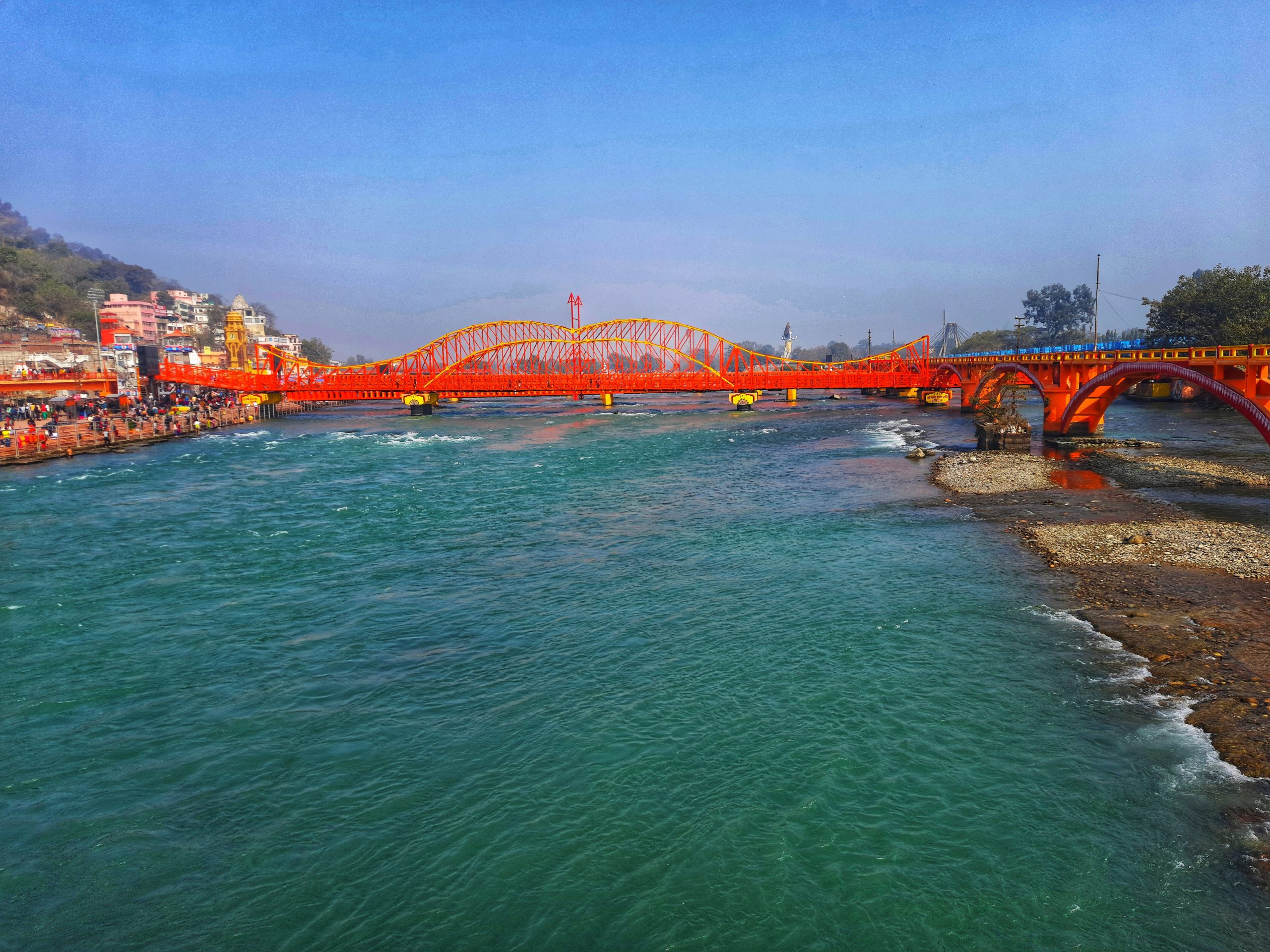 There are 76 ghats in the area, of which 13 have been specially prepared for the Kumbh snaan (holy bath) to prevent overcrowding. Most people would prefer to bathe at Har ki Pauri due to its religious significance.

During the shahi snaan in Kumbh, water will also be released from Tehri Dam. Festival officer Deepak Rawat said that this would be necessary to ensure adequate water in the Ganga at all the ghats at the time of bathing. The water is controlled at Har ki Pauri and the Ganga Canal from the Bhimgoda barrage in Haridwar.

Rawat said that 22 drains used to flow into the Ganga at Rishikesh-Haridwar. All these drains have been tapped and sewage treatment plants have been built. Now there is no dirty water flowing directly into the Ganga. He said that a large LED screen has also been installed in the city to monitor water quality, with information on the biochemical oxygen demand (BOD level), pH level, and temperature displayed. 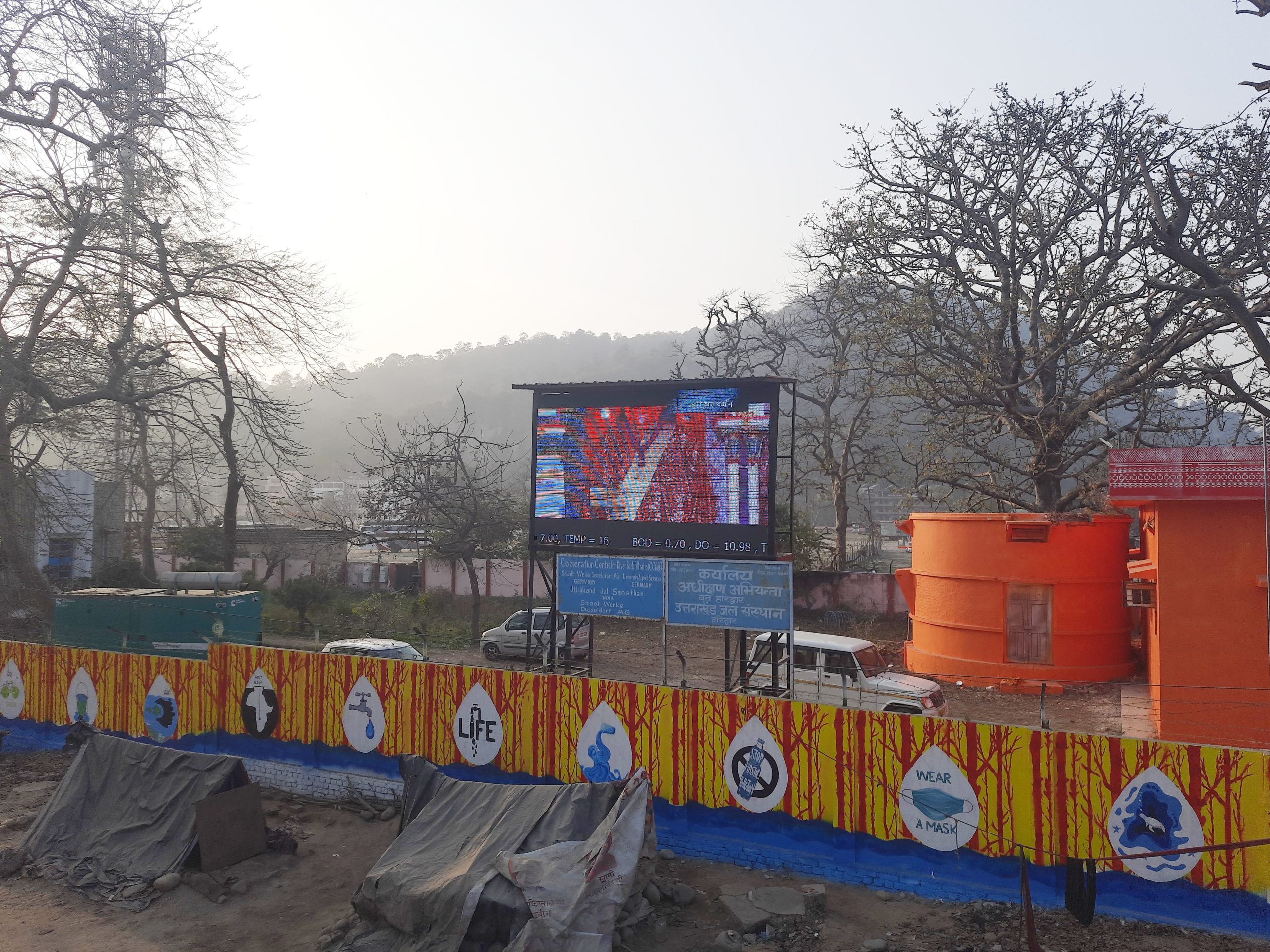 A screen has been set up to monitor the quality of Ganga water . [Image: Varsha Singh]

Environmentalist Malika Bhanot, who is associated with the Ganga Ahvaan organisation, said that traditions such as the Kumbh will be better preserved if commercial exploitation of the Ganga through the building of dams is stopped. She also called for infrastructure such as toilet facilities for those coming for the Kumbh.

Health facilities at the Kumbh

The central government has decreed that people will have to stay six feet apart during the Kumbh, although it is hard to see how that will be ensured. Nevertheless a nodal officer will be deployed for Covid-19 at Kumbh, a monitoring desk will be set up, and a large number of health workers deployed. Samples of those suspected of being infected will be examined at the Rishikesh branch of the All India Institute of Medical Science (AIIMS), while the Doon Medical College, the Himalayan Institute of Medical Sciences and the Himalayan Hospital will also conduct Covid-19 testing.

The centre has advised the state government to set up temporary hospitals with 1,200 beds, and mobile testing facilities for Covid-19 testing in the fair area. For this, the state government will be assisted by the Defence Research and Development Organisation – the military’s R&D division. Arrangements like PPE kits, human resources, oxygen and ventilators should be prepared in advance, the centre has said. The state government has been requested to be in touch with Delhi AIIMS for clinical management, but the work is yet to begin. At present, 2,800 Covid-19 beds are available in hospitals in Haridwar, Rishikesh and Dehradun.

An infrastructure bonus for Haridwar

Due to the Kumbh, infrastructure has improved in Haridwar. Eighty-four works of a permanent and temporary nature were approved in preparation for the fair. About INR 5.2 billion (USD 70 million) has been spent on these to date. They include construction and widening of roads, construction of flyovers, repair of ghats, laying of sewers, electric underground cables and temporary toilets. It has been reported that 20,000 temporary toilets have been funded by the state government around the fair area at the cost of INR 640 million (USD 8.83 million). These temporary toilets are not yet visible in the city. 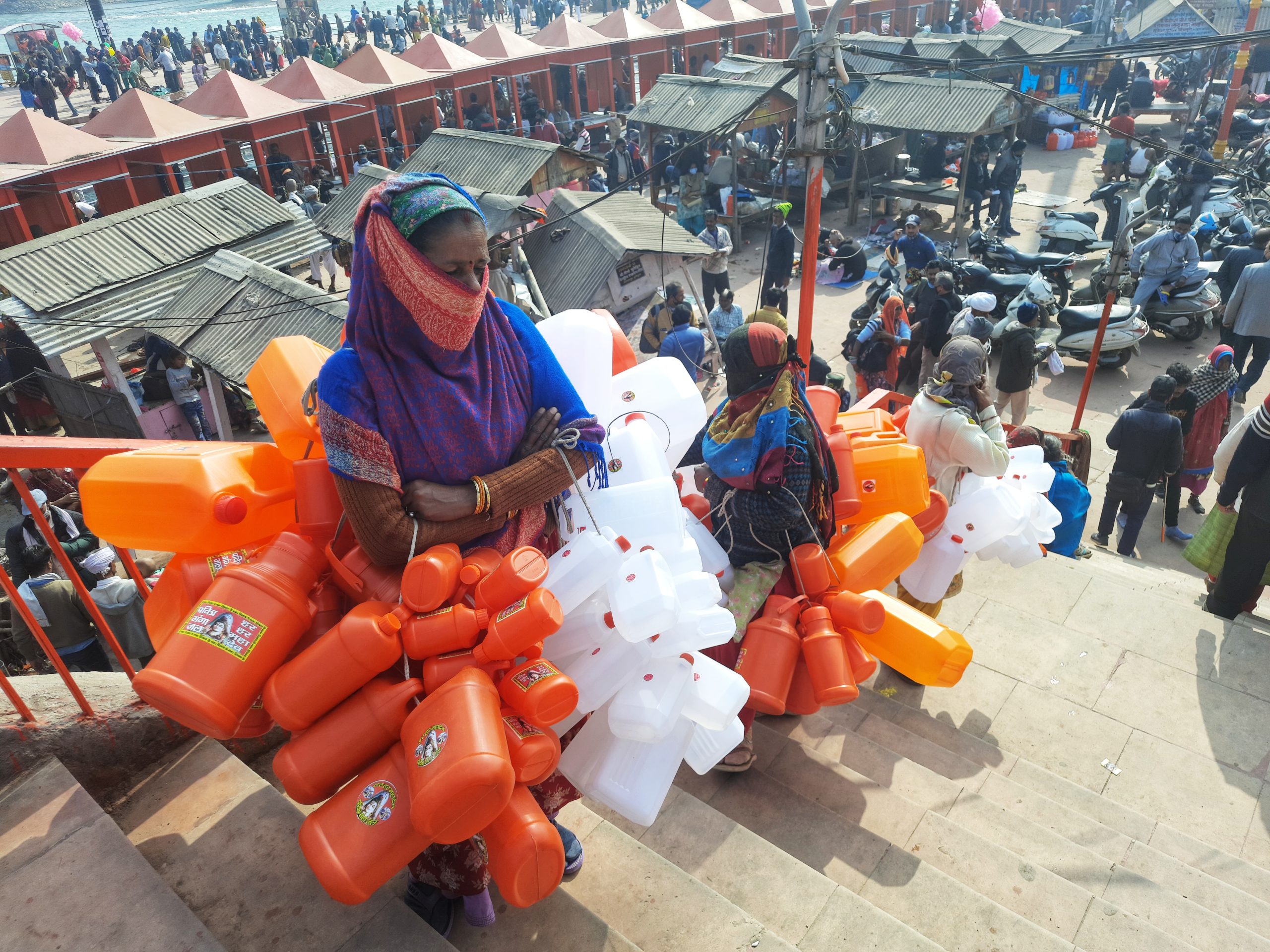 Kumbh is a festival of faith, but it is also a major boost for the local economy. Hotels, tourist lodges, taxis, small shopkeepers and guides all wait for this fair. Siddharth Chakrapani of the Har ki Pauri Ganga Association said that on average a person spends about INR 200 at the fair. If five million arrive in a day, that would mean billions in spending.

But, like any other bounty, floods – in this case of pilgrims – can both replenish and destroy. For Swami Shivanand of Matri Sadan, the Kumbh is a massive flood, but the system designed to organise it is merely enough to manage field irrigation. “It will not be able to cope,” he feared.

Cleaning the Ganga: an unholy mess

Did festivals pollute Yamuna less this year? Delhi has no idea

Art of Living festival accused of polluting the Yamuna