In early July, an unusual submission arrived in The Third Pole’s inbox. It was a poem, written by acclaimed writer Sudeep Sen and inspired by our coverage. Intrigued, we spoke with Sen to discuss the poem, climate change and the coronavirus pandemic. 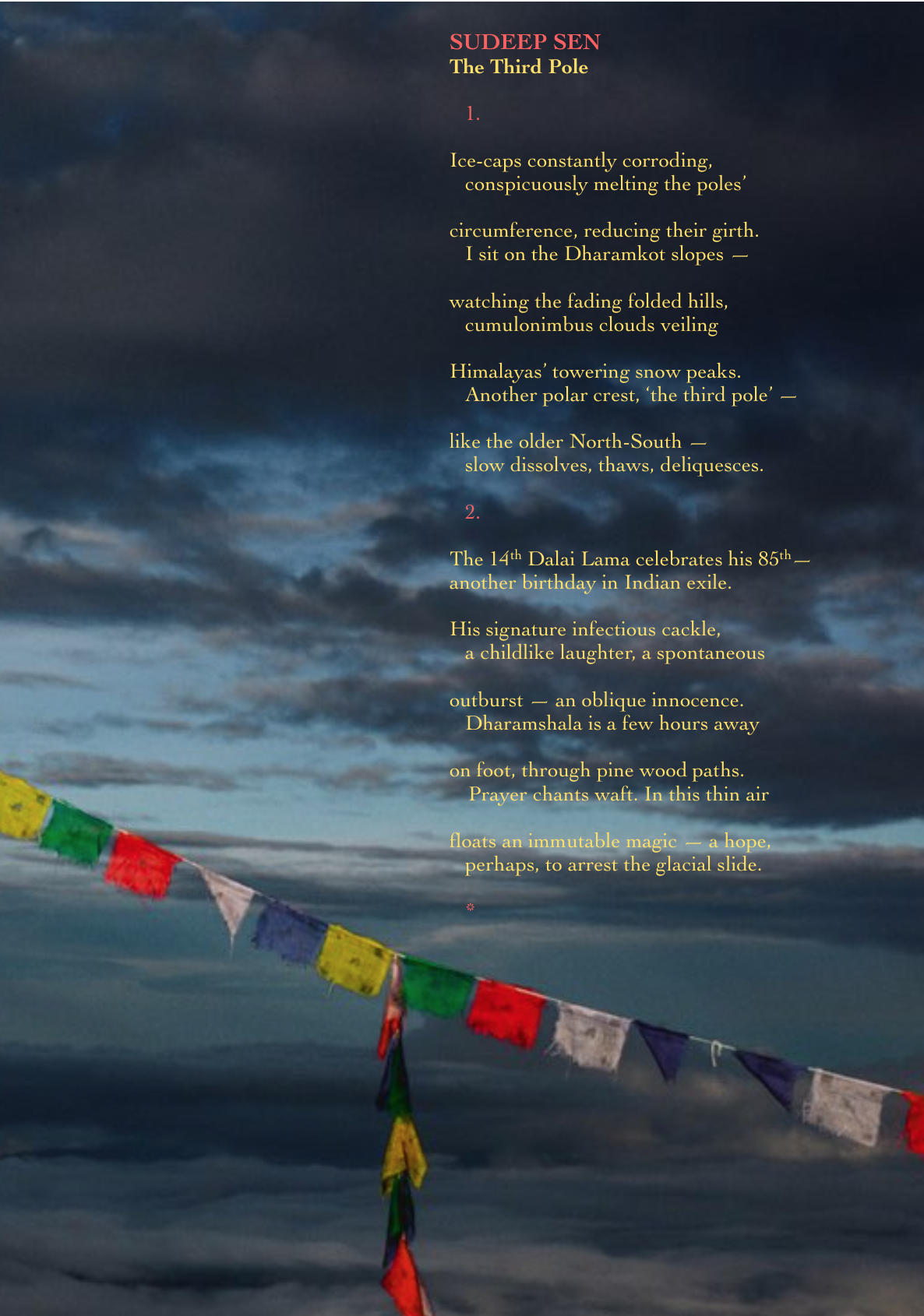 I had wondered aloud whether more poetry has been written about climate change in the past two years, in tandem with rising general awareness and alarm. Sen (who has been described by the politician and author Shashi Tharoor as “a poet who is rapidly becoming the best-known Indian poetic voice of his generation working in English”) rejected this.

“Poetry about climate change has always been out there, it’s just that now it is being noticed more,” he said. “When certain things make the front-page news then people start focusing on it.”

I asked what inspired him to write his latest poem.

“When I was writing ‘The Third Pole’, I had no intention of writing a climate change poem or a water-resource poem. I was just fascinated with the idea of an alternate pole.

“The name itself got me thinking. You tend to think in sort of a bipolar way – the north and the south, the traditional poles. If you think of the Himalayas as the centre, the whole map shifts.

“All these thoughts were brewing in my head, and it also happened to be the Dalai Lama’s birthday the day I was deeply engrossed in this incipient idea.”

As a student, Sen was very interested in science. Fibre optics was a passion, and he also considered pursuing physics or becoming an architect. “So much of science informs my poetry,” he said. “This particular poem draws from science; it is responding to scientific and geological forces.”

The poem is written in couplets, Sen said, to allude to the two poles “and the constant tug between man and nature”.

“For the same reasons, the poem is in two sections – representing the two poles, with the third pole as the invisible – or the new – pole,” he added.

The Dalai Lama, laughter and humanity

There is a sense of slow momentum in ‘The Third Pole’; of great forces being set in motion. The poet watches as the landscape literally “dissolves”. But in the second half of the poem, in the context of hope to “arrest the glacial slide”, the Dalai Lama is mentioned.

“He is such an eco-warrior,” said Sen. “Any enlightened person is an eco-warrior. Nothing is really divorced from anything else. If you are really looking at things in a holistic and global way, then there isn’t a separated or isolated way of looking – and the Dalai Lama embodies so much of this.”

Having fled Tibet in 1959, the Dalai Lama has spent most of his life in India. As a figure with ties to both India and China, Sen said he has become “like the third pole himself” – occupying an in-between space in relation to the two countries.

“He has this childlike cackle: these serious interviewers go and interview him, and he appears to be laughing away and cracking jokes. Of course, he slips in all the important teachings and ideas he needs to. It is wonderful that he can be like that, because that comes with the highest form of knowledge. Humanity and laughter, and peace and wonder, are more important than the grief that surrounds us.”

Productivity and the pandemic

I remarked that many people with literary inclinations have been disappointed with their output since March. At the start of the lockdown, there was much talk of first novels finally being written, instruments being learnt and languages picked up. Subsequent comment pieces bemoaning the authors’ lack of artistic productivity have proliferated.

See: The Pakistani children’s author focusing on the planet

That has not been the case with Sen. His poem, ‘Love in the Time of Corona’, was published in The Indian Express in April. It was quickly picked up by newspapers, magazines and anthologies across South Asia and internationally. He has also put together a new volume of poetry, Anthropocene: Climate Change, Contagion, Consolation, which brings together material written over 20 years.

During the early days of India’s lockdown, every day Sen photographed the same view of the sky from his terrace. “It is astonishing how the same spot in the sky changes day to day – so that became a section of the new book”.

If more people read poetry, I asked, would societies be better equipped to deal with times of crisis?

“People who would turn to quieter things in life would benefit certainly. It has always been the case,” Sen responded.

However, he took issue with the phrasing of the question.

“People keep saying, ‘It is a time of crisis’, but to me it is really just part of a larger churn. The pandemic was bound to happen because of man-induced problems.

“Just like the Earth tries to seek its own balance by shifting tectonic plates and causing earthquakes, floods and so on,” Sen said, the Dalai Lama in ‘The Third Pole’ represents someone “who is trying to bring in peace and harmony and balance”.

He added, “There is a reason that all this churn happens – some of it causes devastation and some of it causes remoulding and remaking. The Himalayas wouldn’t exist if there weren’t all these tectonic shifts.”

When Sen wrote ‘The Third Pole’, the worst clash in 45 years between Indian and Chinese troops had just happened in the Himalayan region of Ladakh. Was that on his mind? “Politics is always, if not in the forefront, very much omnipresent – how can it not be?”

This prompted him to lament the ills of populist governments, corruption, capitalism, overconsumption and needless poverty. “There are often so many insidious forces,” Sen summarised. “But you know, you just concentrate on what one can do and just get on with it. Being as kind and civil, creative and proactive, as possible. You have to sleep peacefully at the end of the day.”

The ascent of Lalana: triumph and tragedy

Why are landslides so deadly in Nepal?