The monsoon rains had doused the brutal summer heatwave, and the season of fertility and hope had started in north Bihar. Ashif Wahab and Nasreen Parween were excited about their monsoon wedding and counted the days until they would marry. But on the day itself, instead of his wedding entourage, the raging Burhi Gandak River was at Ashif’s doorstep.

This article is a part of a joint publication of articles by media outlets in South, Southeast, and East Asia on climate change and the environment, to mark the 41st anniversary of CommonWealth Magazine, coinciding with the 50th anniversary of the Earth Summit.

The bride was upset, nervous at the prospect of the wedding being postponed, the expense of the reception going to waste and neighbours taunting her for the misfortune. But the mighty river showed no mercy. “I was on the verge of a panic attack,” says Nasreen.

With her hennaed hand, she picked up the wedding invitation. It read ‘Ashif weds Nasreen on 6 August 2020’.

“I called Ashif and reminded him about his promise,” says Nasreen.

“It was supposed to be the happiest day of my life, but it also became the scariest,” says Ashif, a mechanical engineer in Raghunathpur village, in Bihar’s Muzaffarpur district.

A state of raging rivers, youths and risky monsoon weddings

Bihar has an abundance of both rivers and young people, but the energy of the former is causing the state to lose the promise of the latter. Major rivers like the Kosi, Gandak, Burhi Gandak and Bagmati originate from the Himalayas in Nepal and flow into north Bihar. There, they frequently cause large-scale devastation. This has led to massive migration of young men to other states.

A long-term study published earlier this year calculated for the first time the socio-economic impact of flooding at a village level in north Bihar. It found that 48% (about 11,400) of villages in the region were flooded every year or every other year between 2001 and 2020. Thirty-five per cent (about 8,300) of villages faced high or very high socio-economic vulnerability. 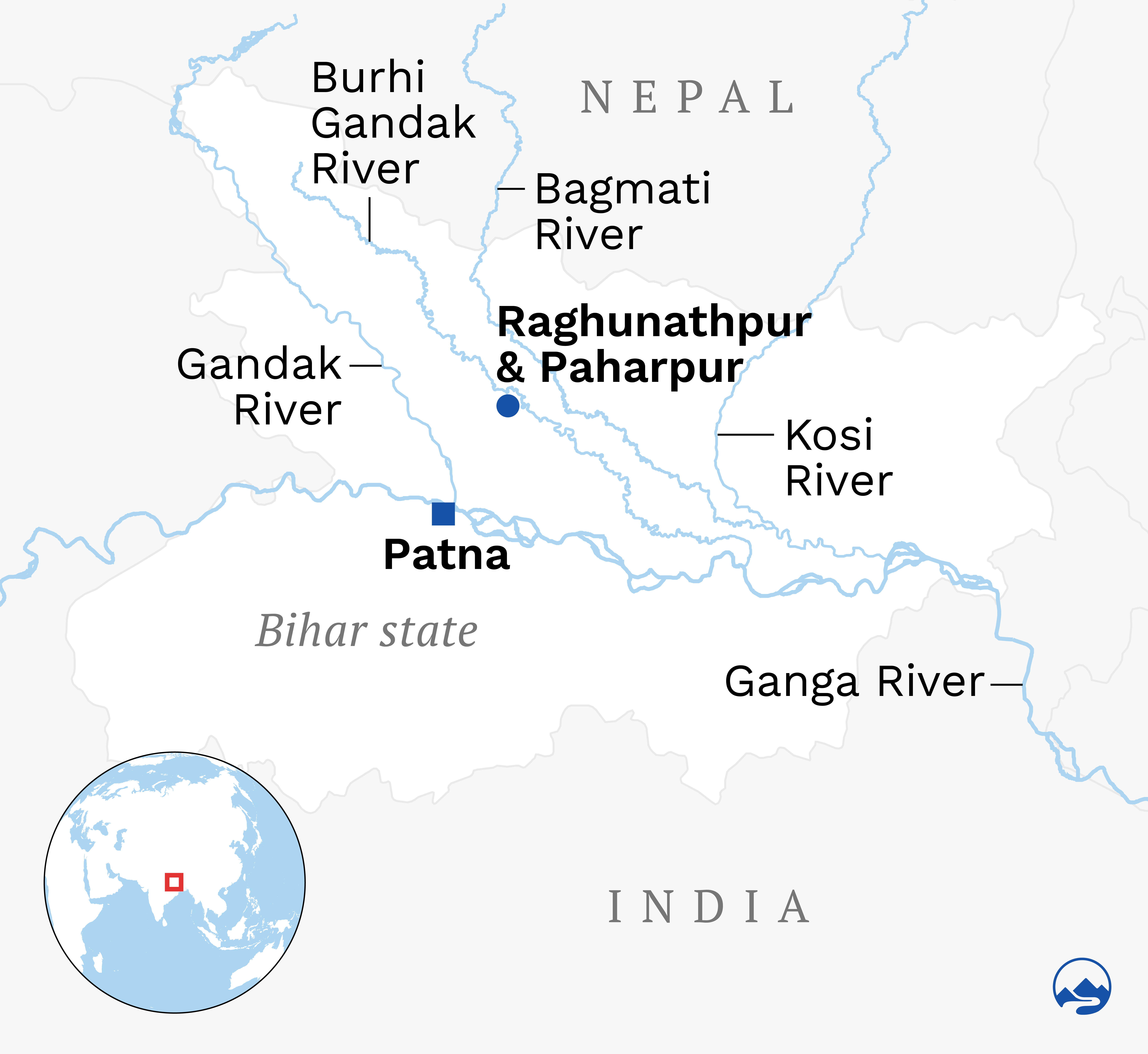 Map showing the abundance of rivers in north Bihar, and the proximity of Ashif Wahab and Nasreen Parween’s villages to the Burhi Gandak River • Graphic: The Third Pole

The geography of north Bihar, where rivers meander over the plains, makes it naturally prone to floods. Poor management of silt, embankments, dams and barrages have added to their ferocity, says Bikash Ranjan Parida, assistant professor in the department of geoinformatics at Central University of Jharkhand and lead author of the study.

As well as migration patterns, monsoon flooding is impacting cultural practices, such as wedding customs. The monsoon is one of three wedding seasons in India.

It takes a village to make a marriage

Postponing or cancelling weddings in the region is considered inauspicious and unmanly in patriarchal Bihar, except in exceptional circumstances such as a death in the family. The village’s reputation is also tarnished. As a result, the entire village of Raghunathpur joined Ashif’s relatives and neighbours in thinking of ways to reach the bride’s village of Paharpur, around 6 kilometres away.

After all, “floods arrive every year; marriages are forever”, goes the saying in north Bihar. In this spirit the best solution, Ashif’s relatives said, was a tractor. Its big wheels could negotiate the floodwaters and a trailer attached to it could accommodate 30-40 guests. 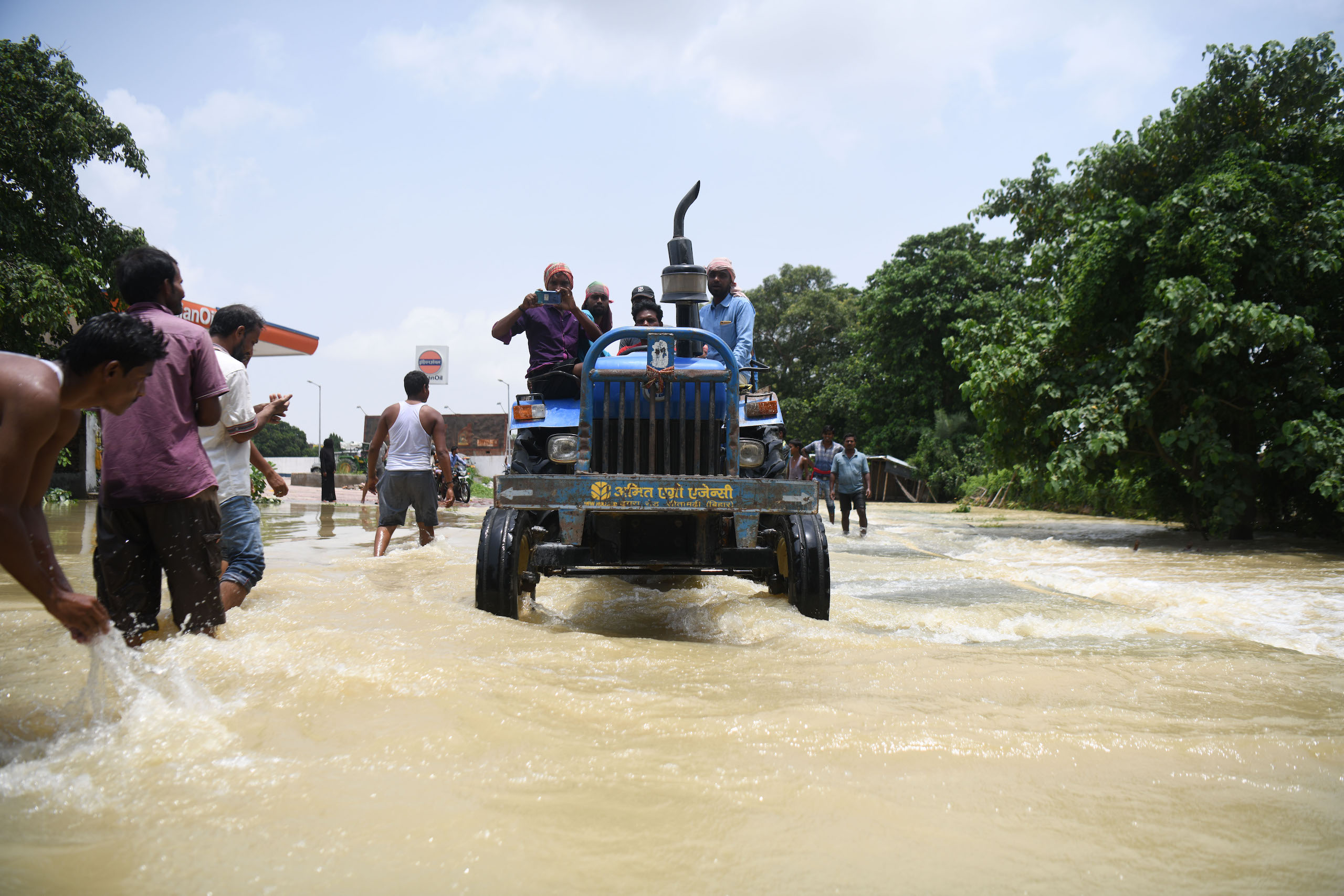 People use a tractor to navigate the floodwaters in Muzaffarpur district, Bihar, in 2020 (Image: Sachin Kumar)

“But what about my reputation,” recounts Ashif, agitatedly. “Reaching my bride’s home on a tractor, a vehicle used for ferrying crops and waste, was below my dignity.” His cousins supported him. Traditionally a bridegroom would ride a horse; today most travel by car. For an upwardly mobile young man to arrive on a tractor – the modern equivalent of a lowly beast of burden – was too much.

A guest came up with the idea of using boats to ferry the groom and his relatives to the bride’s village. Ashif liked the idea.

Not everyone was glad about the arrangement. Ashif’s family had invited more than 200 guests, but there were not enough boats, and almost 160 were left behind. They were disappointed about missing the elaborate wedding feast and the opportunity to dance in the rain – an unexpected, but fun, event on a joyful occasion.

“I felt guilty for throwing tantrums, but for a different reason. My closest people were on the boat, and many didn’t know how to swim. A slap of a strong current could topple these boats. It made me nervous,” remembers Ashif.

Ashif Wahab travels to his wedding by boat during the monsoon floods of 2020 (Image: Noor Babu)

It was not only Ashif and Nasreen’s marriage that was affected. Ashif says there were four more weddings in Raghunathpur and nearby villages in the same week, in which grooms and their guests had to struggle with floodwaters.

As floods become more ferocious, communities increasingly resort to risky measures to keep wedding traditions alive during the monsoon. In 2020 and 2021, there were multiple stories of grooms in north Bihar braving the floods to keep their wedding promises to their brides. Last year in July, a groom’s family even built a temporary bridge to reach the bride’s home. It is impossible to estimate how many have been affected, as while prosperous families might find workarounds, for poorer communities a disaster at a once-in-a-lifetime event would be impossible to manage.

Jitendra Yadav, an activist in Muzaffarpur, says previously floods were moderate and boosted their land’s fertility. Now, they are dangerous. He remembers 2008 when embankments in Kushaha, in upstream Nepal, were breached, causing massive floods along the Kosi basin. That year, “the region witnessed only funerals”.

“Monsoon weddings are becoming highly unsafe as incidents of embankments breaching are increasing and floods are getting more devastating,” Yadav says. 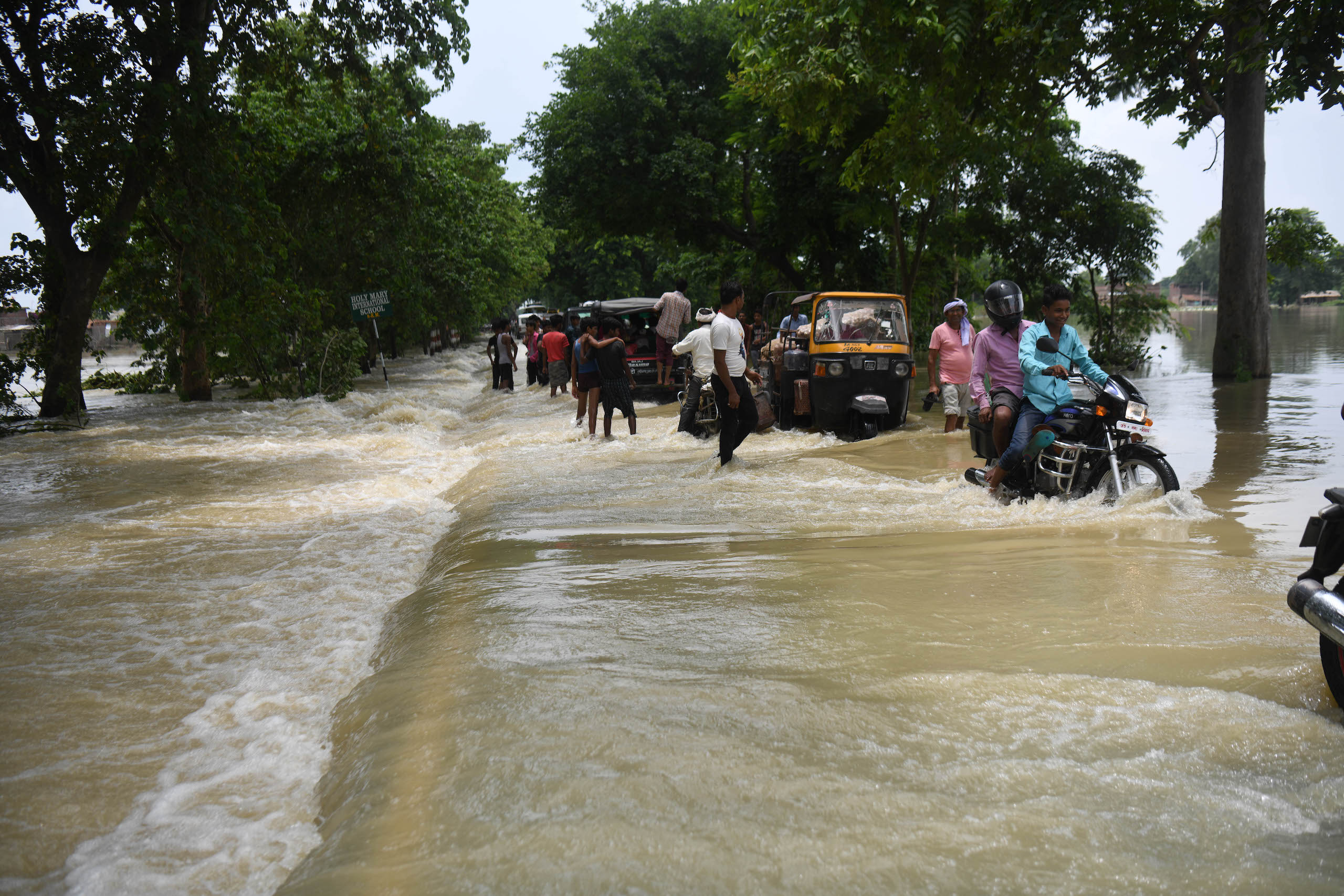 Floods are getting worse in Bihar

In Ashif’s village, the Burhi Gandak has breached its embankments since construction started on them in 1954. “They crack every three to four years, but the magnitude of flooding has increased in the last few years. It was exceptional in 2020,” Ashif says.

Between 1970 and 2020 more than 3,700 km of embankments were built to protect around 2,000 million hectares (mha) of land. The state government spends tens of millions of dollars every year on building, maintaining and repairing this vast network. But these structures, instead of preventing inundation, have increased the flood-hit area in north Bihar, which nearly doubled from 25 mha in 1952 to almost 50 mha in 2011.

Parida, the lead study author, says: “The future appears bleak for the region as climate change could increase rainfall intensity and cause more devastation.”

When the boats carrying Ashif and his guests anchored at National Highway 28, nearly 2.5 kilometres from the bride’s village, the first people to greet them were not the bride’s family. Instead, they were flood victims who had taken to the highway to escape the river’s fury. “They were eager to meet me and show their respect for my community and village’s courage,” says Ashif.

Their gesture showed that despite repeatedly losing everything to floods, people in the region try their best to keep their promises, he adds.

My closest people were on the boat, and many didn’t know how to swim. A slap of a strong current could topple these boats.

Dinesh Mishra, a leading expert on rivers in the region, points out that the mismanagement of flooding is more harmful than the floods themselves. “Floods here have been happening here for centuries. The simple solution is to let the river flow freely and let floodwaters spread the excess silt to farmland.”

Bad incentives means that failed policies continue to be pursued, and local people are not consulted, says Mishra. “Governments want a top-down approach [because] constructing embankments and dams brings funds worth millions of dollars.” He anticipates that politicians will soon blame climate change for the region’s annual floods to justify building more embankments.

Such frequent devastation has high costs. It impacts the economy of Bihar, where 76% of the population is involved in agriculture, and has contributed towards making it the state with the lowest per capita domestic product in India, with high outmigration.

And there is an impact on culture and traditions. After their experience, Ashif and Nasreen have one piece of advice for young people planning to get married: “Don’t get married during monsoon months.”

“We couldn’t perform many rituals such as the haldi ceremony,” says Nasreen, referring to the ritual on the morning of the wedding, when turmeric is applied to the bride and groom. It is normally held in an open courtyard – impossible to do on a rainy day, when the turmeric would run. To make matters worse, the majority of their friends were caught in the floods while trying to reach the celebration.

Despite repeated disasters in Assam, many have no desire to migrate

For villagers in Nepali Himalayas, climate change is a signal of divine revenge