An island sank under the sea, and nobody noticed. Even today, maps of the Survey of India – the government agency tasked with mapping the country’s territory – show Parali I as a small island in the Bangaram atoll in Lakshadweep archipelago in the Arabian Sea, some 400km off the west coast of mainland India. But the uninhabited coral island is not there any more. Its official territorial marker with India’s Lion Capital emblem was barely visible at low tide on a winter afternoon.

A stark reminder of the clear and present danger that climate change poses to small islands worldwide, the sinking of Parali I was noticed in the early years of this decade by researcher R.M. Hidayathulla, then a doctoral student of Calicut University mapping biodiversity in the five small and uninhabited islands of the Bangaram atoll.

“When I began cataloguing the flora and fauna of Bangaram atoll in 2011-12, I found that there were only four islands in the lagoon, despite Survey of India maps showing five. The fifth had gone under the sea due to erosion that far outpaced accretion on the western side of the island,” said Hidayathulla, a native of Angroth, the largest island in the archipelago. “I informed the authorities but the maps are yet to be updated.” Hidayathulla went to the media in 2017 about the disappearance of Parali I, but the development has been largely ignored. 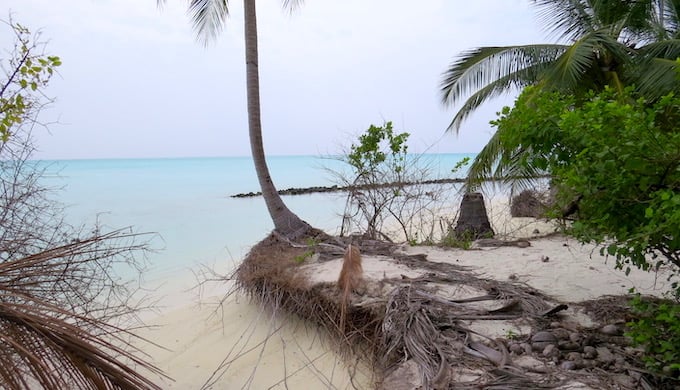 Many islands in the Lakshadweep archipelago are experiencing rapid coastal erosion. (Photo by Soumya Sarkar)

Rapid coastal erosion due to a variety of factors — such as more turbulent seas, storm surges, changing ocean currents and diminished protection from coral reefs due to bleaching (a precursor to mass death of corals) — poses an existential threat to low-lying archipelagos such as Lakshadweep, a group of 27 (now 26) tiny islands, out of which 10 are inhabited by some 65,000 people. The smallest Union Territory in India with just 32km²km2 of surface area located 200-440km off the mainland, Lakshadweep is administered by the federal government with headquarters on Kavaratti Island.

In coastal areas and islands, land erosion and accretion (land accumulation) go hand in hand. What the sea takes away from one part of an island, it replenishes on another. When the rate of erosion becomes higher than the rate of accretion, islands start growing smaller and could eventually disappear. It is a natural process. But it is being hastened by human-induced climate change. Many small coral islands in the Pacific Ocean, such as Tuvalu, Kiribati and Fiji, as well as Maldives in the Indian Ocean, are in danger of sinking under the sea. 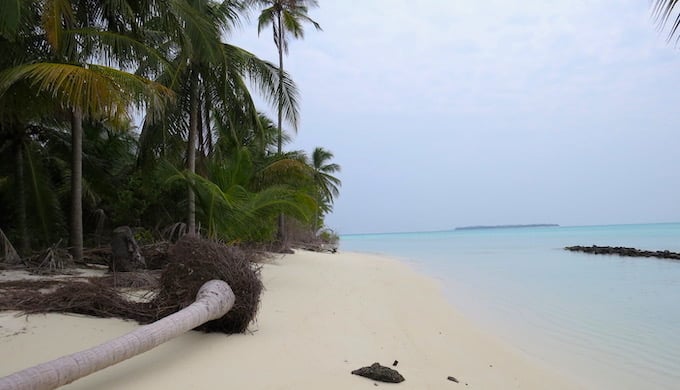 More intense storms lead to the uprooting of coconut trees, a mainstay of Lakshadweep’s economy (Photo by Soumya Sarkar)

More intense storms lead to the uprooting of coconut trees, a mainstay of Lakshadweep’s economy. (Photo by Soumya Sarkar)

The plight of the island nations has received widespread international attention and global agencies are working overtime to address their issues before it is too late. A case in point is Tuvalu, with its nine islands and a population of around 11,000. There is even a move to give special passports to residents of these island nations, so that they can settle in other countries.

In contrast, the more than 1,200 islands of India, most of which are barely a few metres above mean sea level and are home to millions, have remained neglected in terms of efforts being made to mitigate the impacts of climate change on them.

Lakshadweep, the only coral island chain in India, has started showing the impacts of climate change, says P.C. Hameed, deputy collector at Agatti Island. Hameed, 58, said that the waves during the southwest monsoon are much higher today than they were in his childhood. Both the number of storms and their intensity have increased. “This is impacting the livelihoods of the people as coconut trees fall in high winds and fish catches decline,” said Hameed, a native of Chelath Island.

Lakshadweep’s economy is dependent on coconut and fish, with tourism playing an increasingly important role. The islanders are united in their view that Lakshadweep’s climate has changed for the worse, particularly after the 2004 Indian Ocean tsunami, when several of the islands were inundated.

In the winter of 2017, when Cyclone Ockhi devastated Kerala, the southern Indian state closest to Lakshadweep, the islands also saw intense rainfall and high waves that resulted in damage worth millions. Abdul Sakoor, a member of the village council in Agatti Island, said that storms have worsened due to climate change. However, he added, early warning systems had saved the lives of fishermen during Cyclone Ockhi Hameed said the government has bolstered the islands’ disaster preparedness systems by building storm shelters and related infrastructure.

But in the tiny islands of Lakshadweep, where the distance from shore to shore is often less than 500 metres, disaster mitigation can only do so much. The 1.4km-long Agatti, for instance, has a total area of 4.98km², and the seashore on both sides of the island can be seen from most locations, and when that sea rises, there are few safe places to go.

Coral islands the world over have a unique defence system in the form of reefs. Coral reefs play an important role in island formation and providing a resource base for islanders. They also act as wave breakers during storm surges. Even during turbulent seas, the water inside a lagoon is usually calm, and that is mainly due to the encircling coral reef.

On that front as well, the degraded condition of the coral ecosystem in Lakshadweep is not encouraging. Scientists say that water temperatures are increasing faster in the Arabian Sea than anywhere else in the world’s oceans. More worryingly, there are often spikes in the sea temperatures that lead to mass bleaching of corals.

“The health of corals is an indicator of climate change,” said Idrees Babu, a scientist working for the Department of Science and Technology of the central government. “In the Lakshadweep Islands, the health of the coral ecosystem is in definite decline. 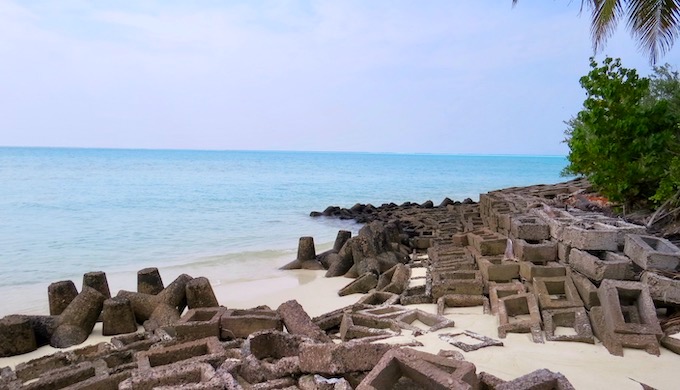 There was a major coral bleaching event in Lakshadweep in 1998 that was studied in detail by researchers. At that time, about 90% of the corals died. More recently in 2016, there was another bleaching that resulted in over 70% death. “Corals take two to three years to recover from a bleaching event,” said Babu. “If such events happen with increasing frequency, they do not have time to recover.”

See: The dying corals of Lakshadweep

He also pointed to the fact that sea grass pastures around Lakshadweep are disappearing quickly. The presence of healthy sea grass pastures is essential for healthy corals and for the marine life that depends on them. “Some coral species are showing resilience to increased temperatures, but coral diversity is being affected,” Babu said.

The government has yet to show any urgency to tackle the effects of climate change. It did come out with a climate action plan in 2012, but not much action has been taken, local residents say. Part of the reason why the environment department in Lakshadweep is not as active as it should be is an acute shortage of personnel. Officials say many positions are lying vacant despite requests to higher authorities.

“We have taken steps to police and restrict poaching activities in the coral reefs,” says Abdul Jabbar, range forest officer based on Kavaratti Island, the administrative headquarters of Lakshadweep. Jabbar, 46, was involved in the framing of the climate action plan. He says that if the plan is properly implemented, many of the issues such as coastal erosion and disaster preparedness can be tackled. “The total area of the lagoons is more than 4,200km²,” Jabbar said. “Maintaining the health of such a huge ecosystem is a challenging task.”

While environment department officials grapple with day-to-day issues related to waste management and the like, there is not much scope to take action that would result in long-term climate change mitigation. In the meanwhile, rampant removal of corals from various islands for construction continues, further damaging the stressed ecosystem.

For anyone visiting the Lakshadweep Islands, the only effort seen to control coastal erosion is to place concrete tetrapods in places where the sea is eating away the shoreline. Tetrapods are a type of structure in coastal engineering used to prevent erosion caused by weather and shore drift, primarily to reinforce coastal structures such as seawalls and breakwaters. “This is the most unscientific way to control erosion,” says Hidayathulla. “It does not prevent or slow down erosion, but just shifts the site of erosion further down the shore.”

If the current apathy to climate change continues at the same time as increased human intervention in the coral reefs, there is every indication that the situation in the coral island chain will get much worse quite soon.

This article was reported with support from Earth Journalism Network.

Best of 2019: Climate refugees stripped of citizenship in Assam

Best of 2019: Vineyards of hope amid drought