Shatrughan Rai’s worst fear came true five years ago when the Bagmati river flooded his modest hut and took away all his possessions. The most expensive possession was his goat. He decided to take revenge.

A month after the floodwaters receded, he picked up his shovel and a basket. He started shovelling sand from the river bank and dumping it on his land. Rai was determined to raise his land at least to the level of the embankment.

The embankment is at least 20 metres high and the villagers of Joki Bujurg, within Aurai block, in Muzaffarpur district of Bihar, did not know how to react to Rai. Some believed that he was possessed by ghosts, others called him a lunatic, and a few started worshipping him.

Manoj Yadav, a fellow villager, says Rai would start shovelling and dumping soil from morning until late at night. “He was always drenched in brown soil. For five years, this person did not celebrate any festival or attend any birth, marriage and death ceremony in the village.”

Rai was a 40-year-old when he took his vow. Today, at 45, he has raised the level of his land by nearly 15 metres and once again constructed a modest hut. A small of herd of goats live happily on his island. 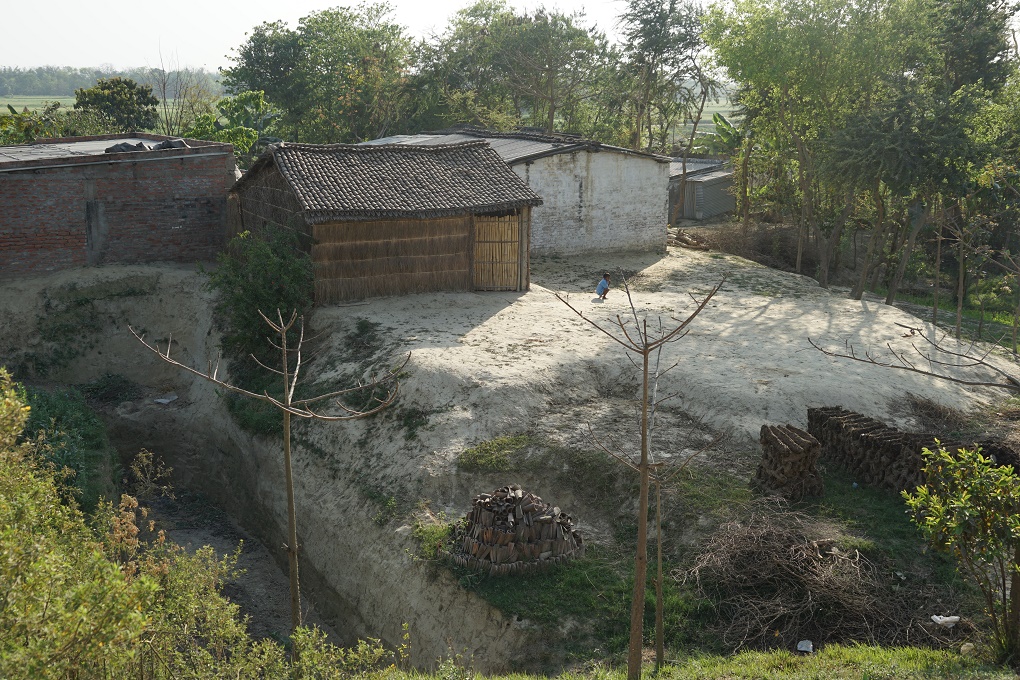 Shatrughan Rai’s hut on the embankment he built [image by: Alok Gupta]

Rai tells thethirdpole.net that his revenge was not on Bagmati, the river he called mother. “Every year the river brings flood and along with it comes fresh soil that rejuvenates my farm land. My revenge was against this embankment and displacement,” he says.

The embankment that is responsible for causing flooding and displacing hundreds of villages and destroying a vast tract of agricultural land from Sitamarhi, Darbhanga to Muzaffarpur district is a part of the Bagmati project.

Just like Rai, the farmers of these districts face a lot more than floods.

The farmers in Maheshwar panchayat in Aurai block have given up on potato, sweet potato and corn farming because of wild boar attacks. Wheat cultivation is done under the watchful eyes of a platoon of farmers who double up as guards to prevent attacks by neelgai, a large antelope endemic to the area, and known for its voracious appetite. 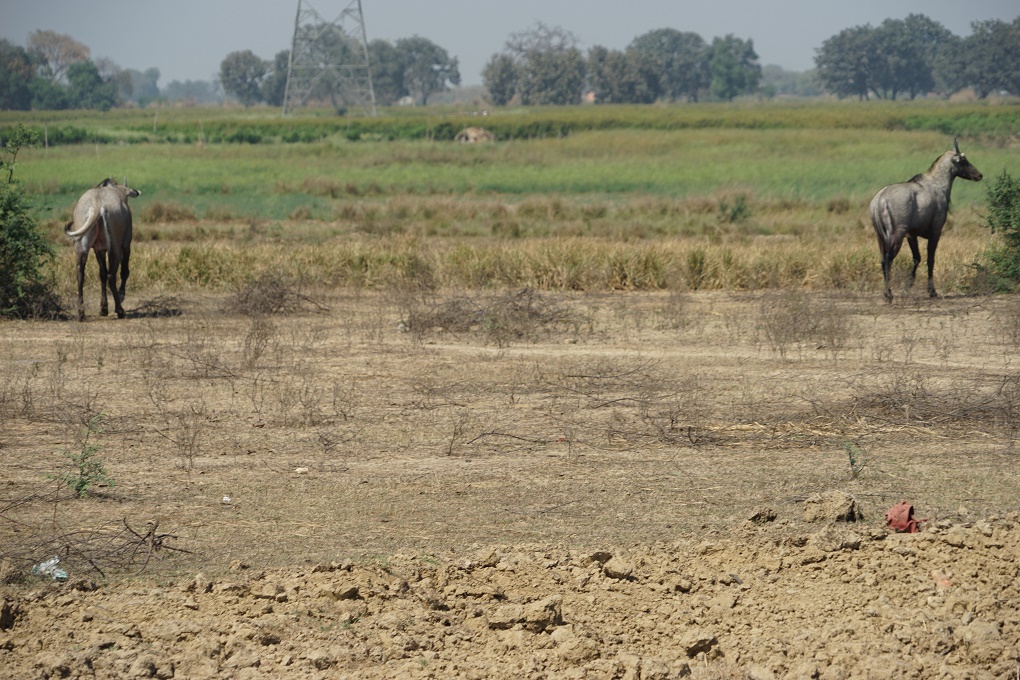 The large neelgai, forced from their habitat, destroy crops [image by: Alok Gupta]

Raj Mangal Rai claims that during the construction of the embankment in 2008, a large amount of sand was brought from a nearby forest. The massive sand quarrying destroyed the natural habitat of antelopes and wild boars. “These boars, antelope and embankment have destroyed the agriculture and nutrition of the region,” he laments.

“Our diet has changed. Our kids used to have sweet potatoes as snacks. We used to roast it on fire and gave it to them. Potato was our favourite vegetable that yielded a good market price,” rues Keshwar Rai, another farmer.

Villagers made a series of complaints to the block development officer of Aurai to resolve wild boar and antelope attacks. They claim that not a single government officer has visited them in response. 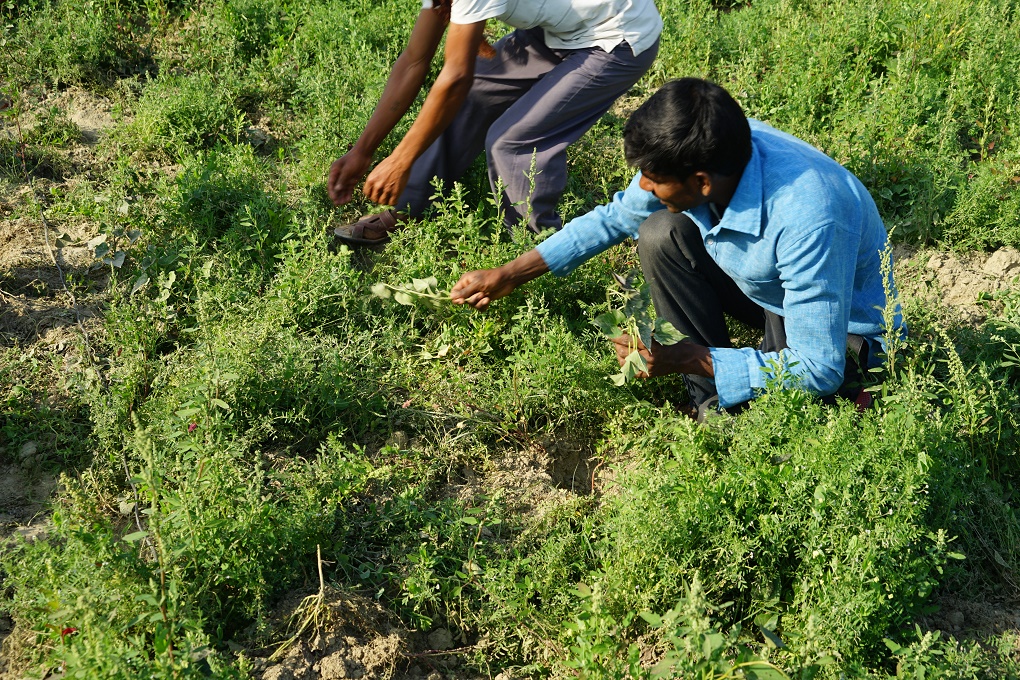 Villagers show how wild boars have destroyed their crops [image by: Alok Gupta]

The project was conceptualized in 1954 and construction work started in 1956 to leash Bagmati’s floods. The first phase was to start building an embankment from Hayaghat to Badlaghat.

Initially the project received massive support from the locals.

Dinesh Mishra, a river expert, recalls that in those years, people were inspired by completion of the Koshi embankment. “The government was motivating people that just like the Koshi embankment, the Bagmati project would resolve the problem of floods.”

Both the Koshi and the Bagmati originate in Nepal.

The second phase of the project started in 1970. It focused on the upper reaches of the Bagmati, from Dheng to Runni Saidpur in Sitamarhi. Embankments with a total length of nearly 55 kilometres were constructed. This entrapped 95 villages with a population of 15,000 families between the river and the embankment.

These villages were almost completely flooded during the monsoon months. The villagers were forced to live on the embankments for nearly three months, and their farmlands were destroyed. Support for the project ended, and massive protests arose instead.

Amidst resistance from the local people, these embankments were constructed during the Emergency (1975-77), at a time when civil liberties were suspended, from Dheng near the India-Nepal border to Runni Saidpur, a stretch of 85 kilometres.

While the cost of project was spiralling, the government added the Bagmati irrigation project in 1969 and a Bagmati multi-purpose project in 1984. According to the archives of the projects, the irrigation project was scrapped because of escalating tensions with Nepal, but the embankment project continues. The third phase of the project started in 2006 to complete the embankments between Runni Saidpur and Sormar Hat.

Dinesh Mishra in his book Bagmati Ki Sadgati writes that the “middle 90-kilometre reach of the river, between Runni Saidpur and Hayaghat, was rated all time unstable and was left open for free spilling of the river even while the lower and upper reaches of the river were embanked in 1950s and 1970s respectively. As a result, the middle un-embanked reach of the river that passes through the blocks of Aurai, Katra and Gaighat causes immense damage to life and property because of the onslaughts of the emanating floodwaters of the Bagmati.”

It is in this middle stretch that “embankment man” Shatrughan Rai’s Joki Bujurg village is situated, where embankments were initially not built. Now they are, at the cost of nearly INR 7.9 billion in a bid to strengthen and raise the existing embankments in the entire stretch of the river.

Mishra points out that the Bagmati has changed course thrice in the last seven decades. “Right now, the river flows between the embankments but no one can predict what will happen when river changes its course.”

He adds that cost of displacement and poor conceptualisation has made the Bagmati project completely worthless. 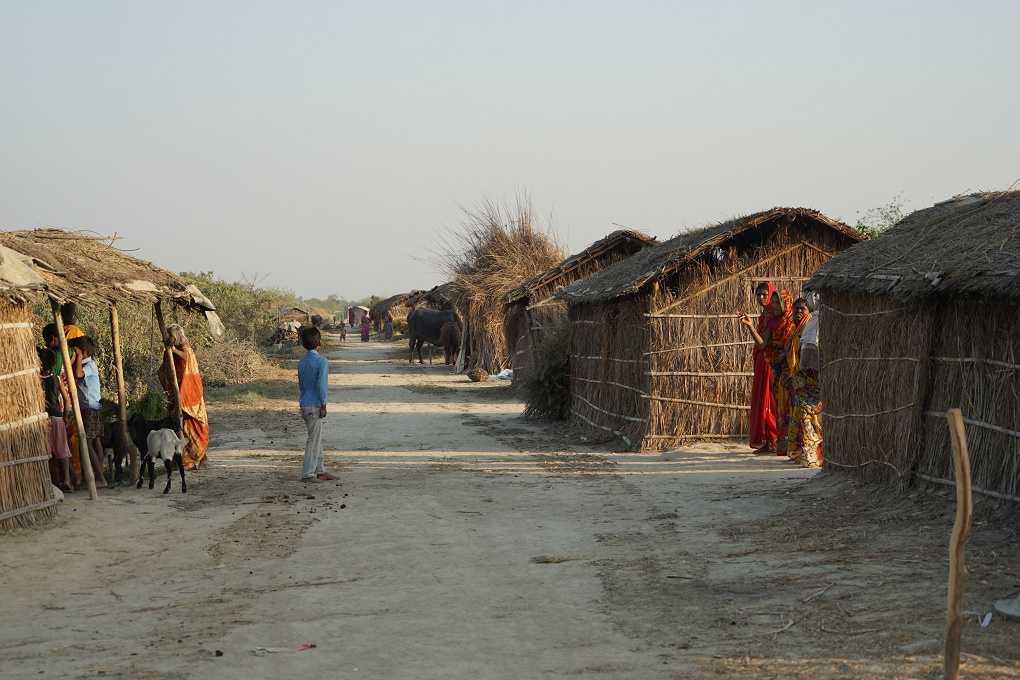 Forced off their lands by floods, villagers find refuge on embankments [image by: Alok Gupta]

In all, 6,565 families from 50 villages displaced because of the embankment at Aurai, Katra and Gaighat in Muzaffarpur district are still waiting for rehabilitation and compensation for the last two decades.

In a report on the status of rehabilitation of those displaced from 50 villages, the land acquisition officer of Muzaffarpur stated that 329 acres of land is required. Katra block is the worst affected by the displacement, from where 3,712 families from 17 villages have been displaced in the last decade. In Gaighat block 1,412 families have been displaced and another 1,451 from Aurai block. Only people from three areas – North Benipur, South Benipur and Jivajor – have been resettled.

Displaced families have formed an organisation, the “Chasbaas Jeevan Bachao Bagmati Sangharsh Samiti”, to demand a complete review of the Bagmati project and adequate compensation to displaced families.

Jitendra Yadav, convener of the organisation, claims that the Bagmati project – conceptualised in the 1960s – has no relevance today. “A lot has changed in six decades. The number of villages and population has tripled in the project area,” he says.

Yadav shows the map and points out that three kilometres of the North-West Corridor Highway and 34 bridges from Muzaffarpur to Darbhanga will be affected by the project. He alleges that embankments will kill tributary rivers such as the Adhwara group of rivers and destroy agriculture in the region.

The organisation has tried hunger strikes, road blockades, foot marches and even standing in the river to highlight their demand. They are demanding that the government set up a committee comprising of river and agriculture experts to review the practical use of the Bagmati project. They are also demanding a uniform compensation package to the families displaced by the project.

But as Bihar reels under the latest floods it is unclear if anybody is listening, and the only man who is secure is Shatrughan Rai, who built his own embankment to take revenge on the government’s.

This story was originally published on August 28, 2017.