Most of the inhabitants of the Thar desert in Pakistan can grow crops only after a downpour has transformed the arid land into lush greenery. But Allahrakhio Khoso, a 60-year-old farmer, does not need to wait for rain.

In the city of Nagarparkar, in the shadow of the Karoonjhar mountains, Khoso has made an orchard in the desert a reality by using matkas or pitchers – an everyday object more commonly found in the home than in the field.

After eight years, Khoso has 400 berry trees, 70 lemon trees, three mango trees and four pomegranate trees. He grows vegetables such as okra, bitter melon, onions, chilies and tinda (a type of squash), as well as watermelon, on his land in the district of Tharparkar. 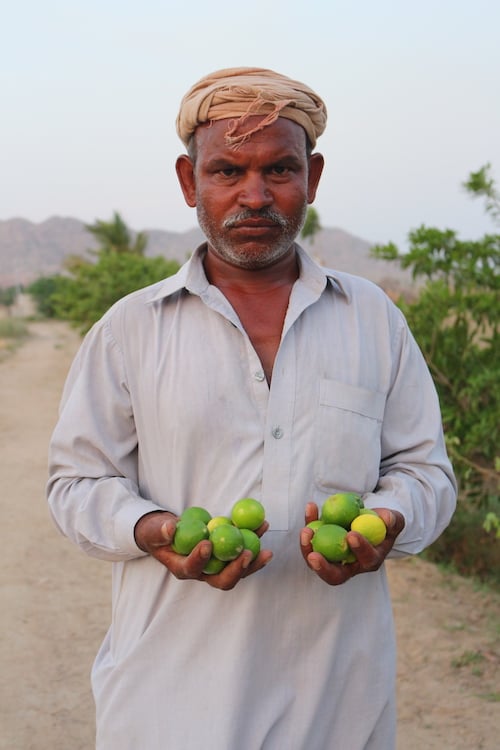 In pitcher irrigation, a large clay pot with a wide bottom and narrow top is buried in the ground and filled with water. The water is slowly released into the surrounding soil and absorbed by the roots of nearby plants, minimising the amount of precious liquid lost to evaporation. 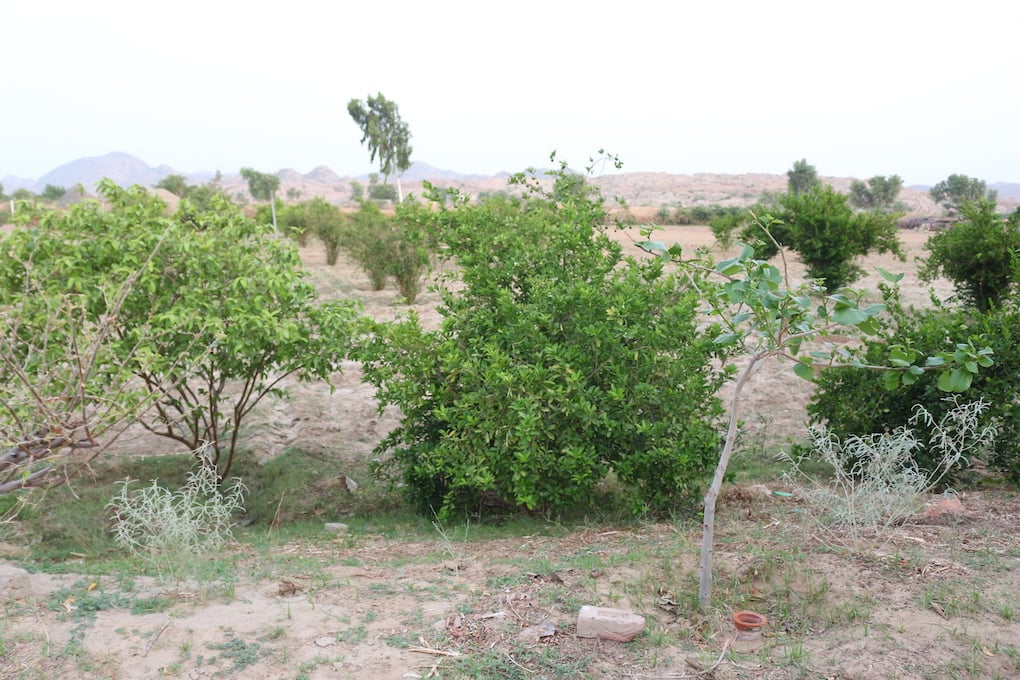 In pitcher irrigation, a large clay pot is buried in the ground near a plant and filled with water [image by: Zulfiqar Khoso]

Water in the desert

Rich in coal but poor in water, Thar is the largest desert zone in Pakistan’s southern province of Sindh. Its residents depend on rainfall; most people fetch their daily water from wells and store rainwater in water tanks. In summer many wells run dry and groundwater becomes brackish.

To this day, some wells are dug without modern machinery. Recently four workers died digging a well when the walls fell in on them.

Water is so important a commodity that it even features in marriage negotiations; before a proposal is accepted, the parents of a bride will ask the groom’s family how close the nearest well is. In greetings people also ask about sweet water wells.

Nevertheless, living in the desert does not mean thirst and poverty are inevitable.

How does pitcher irrigation work?

“Many years back, one of my friends came to visit our village and he discussed pitcher irrigation,” said Khoso. “I got the idea and started working on it. In the beginning, it was quite hard but now it looks very simple. I thought that if I could make my farm green without rainwater, then I should go for it.” 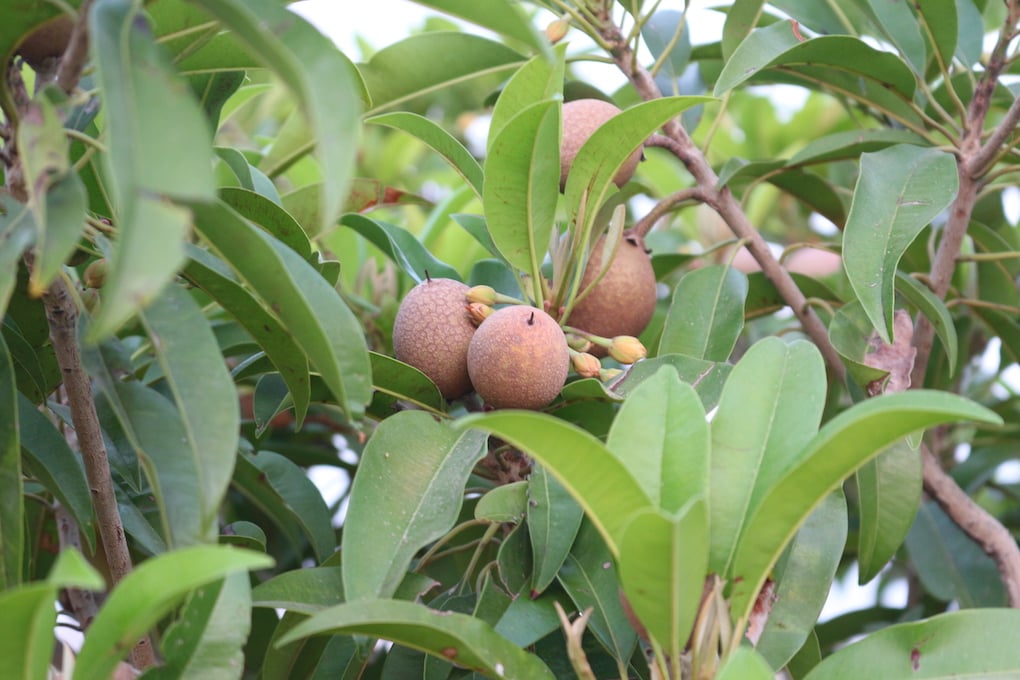 Khoso has made an orchard in the Thar desert a reality [image by: Zulfiqar Khoso]

To install a new pitcher, Khoso first makes a small hole in the bottom of a pitcher. He puts a rope through the hole, then buries the pitcher, packing mud and sand tightly around it. This leaves only the mouth of the pitcher exposed, which Khoso fills with water. The water seeps through the porous clay and soaks through the rope into the sand, where it is absorbed by the roots of the crops he has planted close by. As well as natural fertilisers, Khoso uses mud from Virawah, a city near Nagarparkar where there is an ancient lake.

Each pitcher is 2-3 feet wide and holds 10 litres of water, which will irrigate the soil for 15-20 days. New pitchers are better for irrigation because they are more porous and, once in place, will last three years. Khoso fetches water roughly every 10 days – there is a well on his farm, and another nearby.

Khoso believes this is a more effective method than drip irrigation, where pipes release a certain amount of water and fertiliser per minute directly to the roots of each plant. He said that while drip irrigation is suitable for vegetables, for orchards pitcher irrigation can deliver water more efficiently to the plant.

He calculated that 280 litres was enough for his 400 berry trees for 10 days. 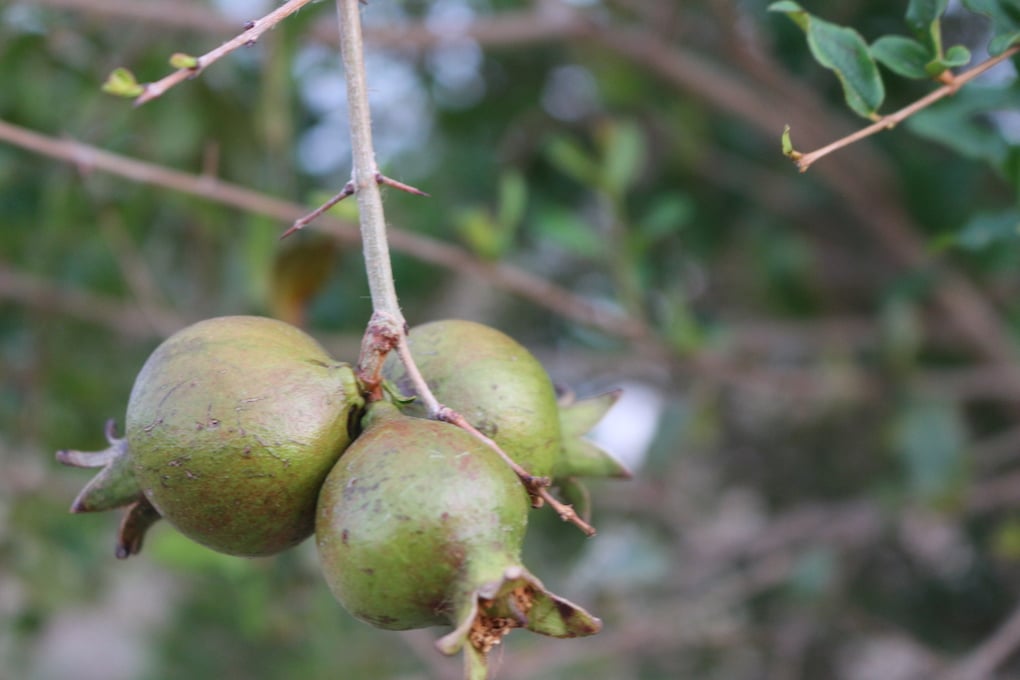 Pomegranates are one of the crops Khoso has been able to produce using his method [image by: Zulfiqar Khoso]

See: In Pakistan the Thar desert waits for a canal

“We do not have any canal or [conventional irrigation] so it’s our duty to save water as much as we can,” said Khoso. “I have tried to make the desert green and I have been earning my bread and butter through this orchard. In the last season, I earned PKR 130,000 [about USD 776] from onions and almost PKR 600,000 [USD 3,580] from red chilies. I am preaching for the usage of pitcher technology… those who want to try this should start from their homes on a small scale.”

Khoso buys his pitchers from Hussain Kumbher, a potter. “This is my forefather’s profession; I earn a good income by selling the pitchers to Allahrakhio,” said Kumbher. “I have sold more than 1,000 pitchers since he has been working on his orchard. People in the Thar desert still use pitchers to store drinking water, but harvesting through pitchers is beneficial for our business – I get PKR 100-150 [USD 0.6-0.9] per pitcher.” 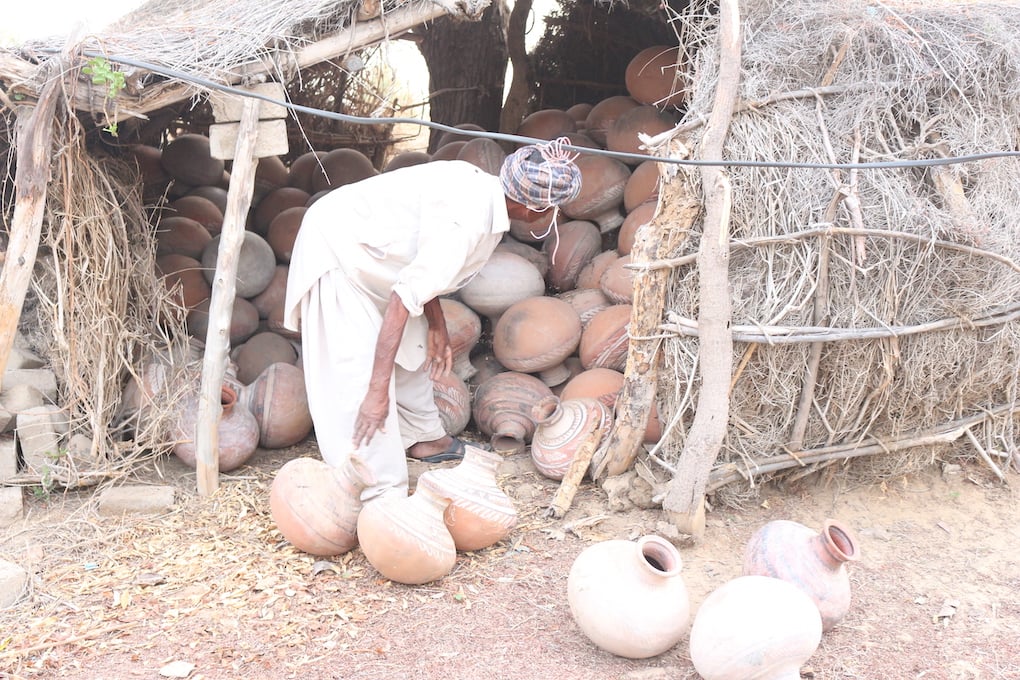 Kumbher lives in the village of Khaark, almost 25 kilometres from Nagarparker. He told The Third Pole he is the only potter in the area selling pitchers for irrigation as well as household use – so it is unlikely other farmers in the area are using this method.

Pitcher irrigation is not common in Pakistan. Many farmers demand canals to irrigate their farms, but experts say canal irrigation wastes a lot of water through evaporation and overuse. In the future, different farming methods could mean bumper crops are grown with a small amount of water.

“People are not familiar with pitcher technology hence it has not been so common. In Sanghar district, some farmers have planted lemon orchards through this technology. In cities people use this technology on a small scale. This is very beneficial in semi-arid zones, like the Rajasthan desert of India. Where no water supply is available, farmers use pitchers to boost their agriculture,” said Ismail Kumbher, a professor at Sindh Agriculture University in Tandojam.

The professor added, “People in the desert are not privileged – they don’t realise the importance of pitcher technology and in our country it is not cheap, therefore we don’t see this water-saving technology on a large scale. This is also helpful for kitchen gardening. I believe the Sindh government and Sindh agriculture department should come forward to facilitate those farmers who are using pitcher technology with limited resources.” He said the government should provide training on pitcher irrigation and pay for or subsidise the cost of pitchers.

Despite its benefits, the technology is restricted by its very nature to places and plants that can be usefully grown using it. Kalro said that pitcher irrigation is more effective in sand than soil and “is only suitable for desert areas… If we use this technology on a national level we need more water and more pitchers, and it would be very costly, so this is best at a household level and in those areas where water is brackish. Especially in Thar, now people are consuming fresh vegetables from pitcher farming. Therefore this is no less than a blessing for local people. We are working here in Umerkot and have developed different arid agriculture models.”

Idrees Rajput, a water expert and former secretary of irrigation, agreed. “Pitcher irrigation has a very limited scope. It may be used for fruit and vegetable cultivation. No mass irrigation is possible with pitcher irrigation. This is helpful in desert areas where people can’t cultivate their land with conventional irrigation,” he said.

Protecting 30% of the earth will bolster economy

A new deal for nature – transformational change or Aichi 2.0?