This the second in a two-part series on coffee in the Mekong. Read the first piece here.

In a street renovated for Buon Ma Thuot’s seventh biennial coffee festival, tourists sat in cafes watching children sing and dance in the traditional dress of the Ede people.

Propaganda posters in the Soviet style hung by the road, depicting ethnic minorities above bold red slogans calling people to construct their homeland and uphold high moral standards. Many people in the central highlands of Vietnam belong to a minority such as the Ede or the Jarai.

“Everyone here plants coffee, and coffee is a part of our culture,” said Eban, on the farm he inherited from his grandparents, who used to grow coffee for the French. He explained that he is fine without breakfast but “would never wake up without coffee”. 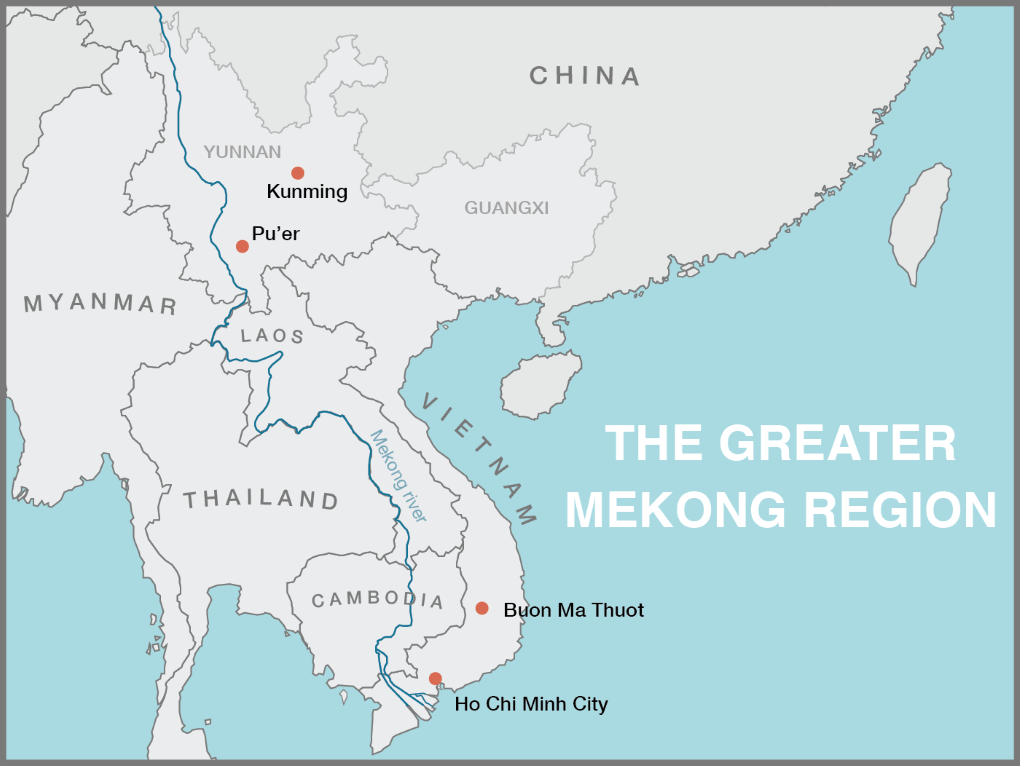 Further up the Mekong river, China also wants a slice of coffee fame. Though far behind the major coffee countries in terms of production, growth has been rapid. By the end of this year it plans to be using 133,000 hectares to grow coffee, more than triple the 2010 area. In its three-year plan for the coffee industry, the Yunnan Agriculture Department announced a focus on “high quality” to make Yunnan coffee “famous internationally”.

How coffee is grown and plantations expand is extremely important given the pressure coffee growing can put on the environment, particularly water sources and forest. Recognising this, Yunnan is taking measures to promote organic coffee farming.

China is a tea-drinking country but coffee consumption is growing rapidly. International franchises like Starbucks and Costa have reached almost every big city, while Chinese brands like Luckin Coffee are emerging. Over the last decade coffee consumption has grown at an average rate of 16% each year, compared to a world average of 2%, according to the International Coffee Organisation.

Despite the coffee fever in urban China, farmers in Yunnan have little connection to the drink their plants become. Li Yemei doesn’t drink coffee and has never heard of mocha or cappuccino. Coffee is merely a cash crop for her, no different from rubber or mango. Unlike her counterparts in Vietnam, she brews a pot of tea to start the day.

The dark and aromatic tea grown where she lives in Pu’er is world famous.

It is a challenging aim. When she brought samples to the Beijing International Horticultural Exhibition this year, many people had no idea that tea wasn’t the only hot drink coming out of Yunnan.

“Yunnan has been planting coffee silently for too long,” said Huang. “It’s time for the world to know we have high-quality coffee.”

When Huang visits coffee farmers she always brings a bean grinder and a French press. She believes farmers who have tasted and enjoyed coffee care more about cultivation.

As part of the growth efforts, this year Pu’er established the Tea and Coffee Industrial Development Centre, where Huang works. “Pu’er is the heaven of Arabica coffee”, states a board outside her office. 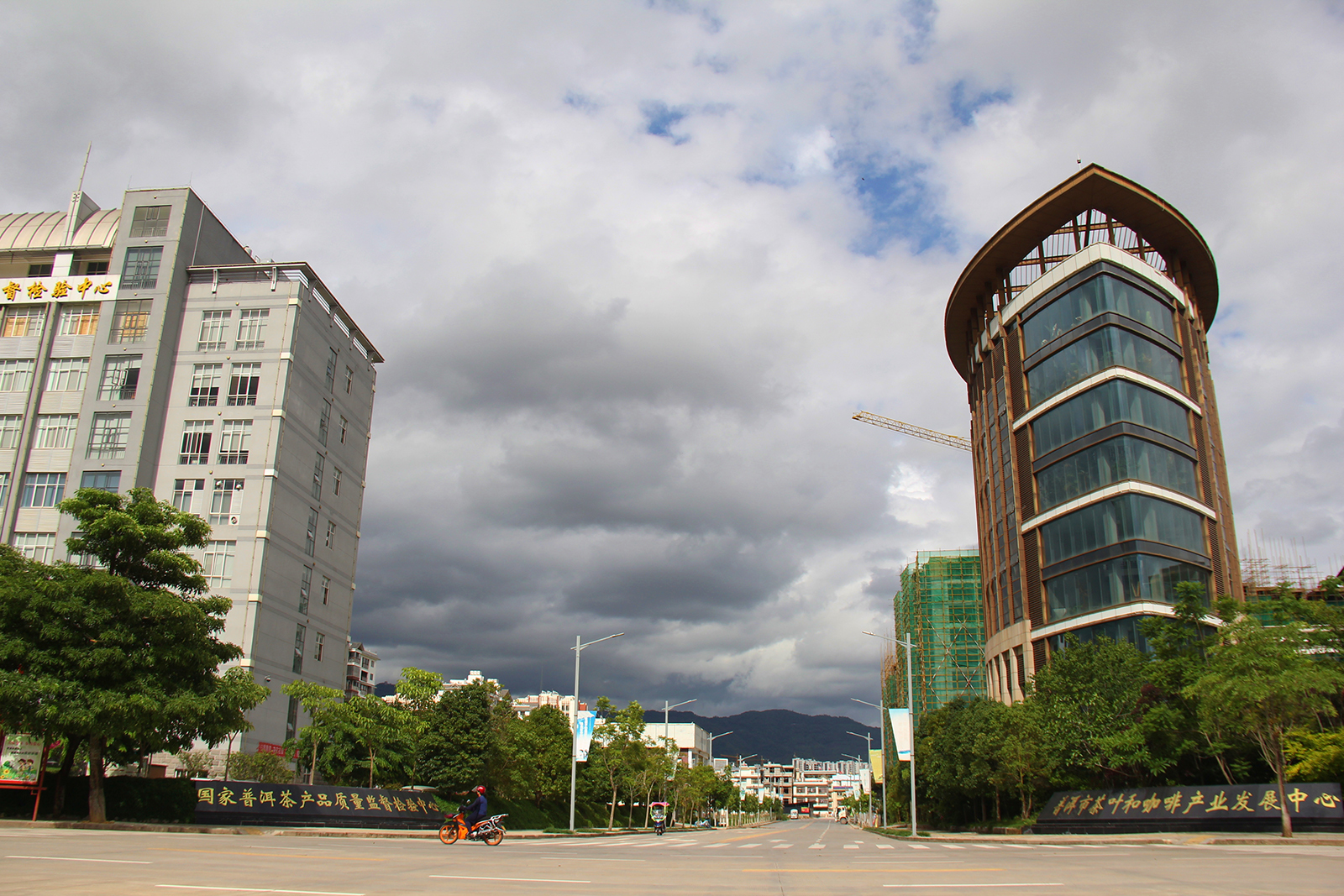 However, a booming demand for low-cost coffee is putting pressure on coffee-growing areas already suffering serious deforestation from agricultural activities. According to Greenpeace, by 2013, only 9% of Yunnan’s forest was still primary, because “many high-quality forests have vanished and been converted into plantation”.

Fifty-three-year-old farmer Xing He has to use herbicides and chemical fertilizers three times a year to boost production. And even a light rain can wash away the soil from mountain slopes where the coffee plants grow. Pointing to the reddish river water mixed with mud, Xing said: “The mountain can’t hold soil anymore. The fertilizers are all wasted.”

Yunnan has realised that to establish a coffee reputation, it must improve the quality of its beans and plant in an environmentally sustainable way, rather than follow the mass market’s demand for quantity over quality.

“There’s no future in cultivating low-quality coffee, to pollute the environment and get stuck in the vicious circle,” said Huang. “We need to plant speciality coffee which gives our farmers the power to set the price themselves.”

By 2020, Yunnan plans to have more than 4,600 hectares of organic coffee farms using only organic fertiliser and bio-pesticide, and with more shade trees to improve soil quality and water retention.

It also aims to have more than 3,000 hectares of coffee certified by the Rainforest Alliance (RA), a non-profit organisation that promotes sustainability in agriculture and forestry. Yunnan plans to achieve these goals through efforts including government investment in training farmers and building dozens of “demonstration farms”.

In RA-certified coffee plantations, farms protect their natural ecosystems and do not contribute to deforestation. Soil should be healthy, waterways protected and the health and wellbeing of workers guaranteed. RA’s standards suggest the farms provide at least 40% tree cover with at least 12 different tree species, and pests be managed using biological controls and other non-chemical methods.

Increasing numbers of coffee companies and NGOs are trying to make a change. In 2012, Starbucks built a “farmer support centre” in Pu’er, providing trainings for local farmers on increasing productivity and quality on their farms. The company aims to train 200,000 coffee farmers by 2020 to improve long-term sustainability worldwide.

The challenges are urgent but for many people who make their sole living by farming coffee, the transformation to environmentally friendly cultivation is too expensive and time consuming.

Xing He has never heard of “Rainforest Alliance” or “shade-grown”. This year, the key question she is asking herself is whether or not to do a second round of fertilising: “No fertiliser, no good product. But if I invest in fertiliser, the price could still be low and I lose more money.”

When the farmers in Cu Pong commune invested in fertilisers and tried to replace some old plants, the new ones soon died, including Thuyl Nie’s. Experts said the soil had been exhausted and polluted.

“Agriculture engineers advised us to leave the soil to rest for one or two years, but it’s impractical since we rely on the land and farming for our livelihood,” said Nie.

“The weather outlook for coffee growers over the next millennium is poor. Coffee farmers will experience climate change through greater unpredictability, with more droughts and flood,” according to Peter Baker. “Climate change cannot be adequately addressed at the micro-scale.”

Annegret Brauss, a project manager at the International Trade Centre in Geneva, said that governments and institutions could further support coffee cooperatives and their members to become more resilient to climate change, including by enhancing access to climate-related information and early warning systems for extreme weather events.

“With the increasing impacts of climate change in the coming decades, such projects will not only increase resilience of the sector, but also create new opportunities,” she said.

Nie said many villagers are leaving for Ho Chi Min City to work in factories, and those who still wish to stay with the land have a new “celebrity” crop to focus on – durian. Surging demand for durian, particularly in China, has pushed the price up very high.

“It’s 100 times more profitable,” said Nie. “But jumping in the durian-planting wave might make many people bankrupt once the price drops. We had a similar story with pepper-planting not long ago.”

Additional reporting by Nhung Nguyen. The story was reported with support from Internews’ Earth Journalism Network.


This piece was originally published in chinadialogue, where Karoline Kan is the Beijing editor.

Fishing villages dry up on the Indus