Ratan Pathuri watches floodwater swirl below his veranda. The swollen Dhansiri River has inundated Pathuri’s village, Nikori, in the district of Golaghat in Assam; necessitated the relocation of his livestock; and driven many people into relief shelters on higher ground in August, during The Third Pole’s visit. “This happens every year when the Dhansiri swells up with the rains,” 31-year-old Pathuri says. “At least this year we’re home and dry.”

Every year, floods occur in the basin of the Brahmaputra and its tributaries, such as the Dhansiri. Originating in the neighbouring state of Nagaland, the Dhansiri flows 352 kilometres before joining the Brahmaputra on its south bank. On its way, it passes low-lying areas like Golaghat, spilling over its banks during the monsoon.

Raw material such as bamboo is transported by river. With its tropical monsoon climate, Assam experiences heavy rainfall and is flooded almost every year. (Image © SEEDS)

Pathuri says that in recent years the floods have become more frequent and intense than ever before. Interspersed between larger and more destructive floods like the one in 2017 – considered the worst in 28 years – residents of Assam face multiple smaller deluges every year.

One of the resulting problems is sustained waterlogging. This is partly caused by the building of embankments that cannot prevent the swollen river from submerging the land. Instead, they prevent the floodwaters from receding back into the river. Traditional houses, built on stilts to withstand moderate flooding, are not designed to deal with this, and end up collapsing.

Assam is prone to floods, cyclones and earthquakes. During these disasters, loss of life and damage to property happen largely due to houses collapsing, according to architects associated with the Sustainable Environment and Ecological Development Society (SEEDS), a humanitarian non-profit organisation.

Multiple factors contribute to this: the flouting of land-use permits, leading to construction in vulnerable areas such as riverbeds; a lack of early warning systems; and poor disaster preparedness, such as embankments. The natural disaster is only part of the problem. 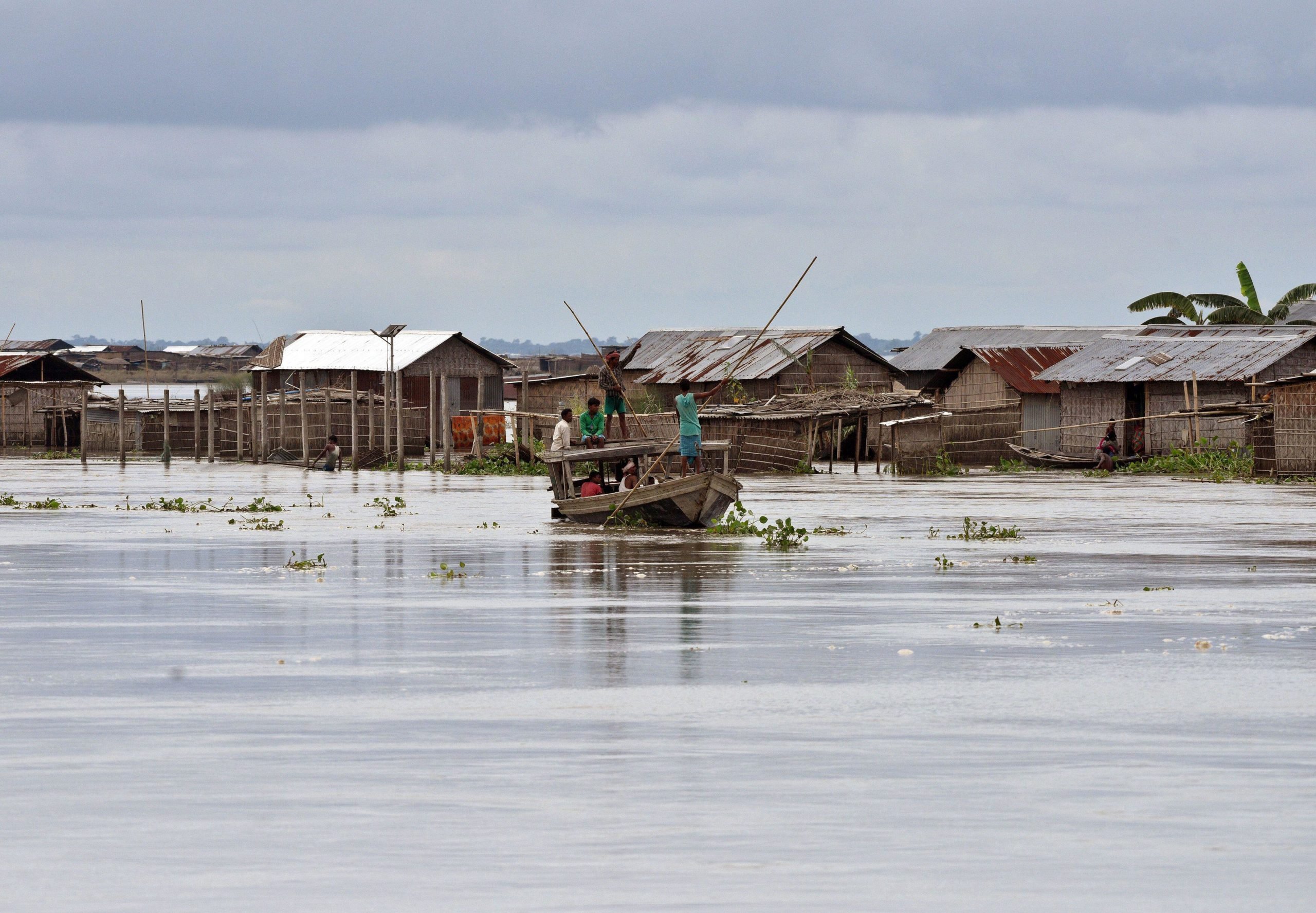 “We estimate that the country loses 1% of its housing stock to disasters every year,” says Anshu Sharma, co-founder of SEEDS. The Indian NGO has been working on disaster management and mitigation in the Indian subcontinent since 1994. Assam has been one of its focus areas since the 2017 flood.

“Across India, we’ve observed people are building homes where they didn’t earlier. They are eschewing vernacular architecture for more ‘modern’ concrete houses,” Manu Gupta, co-founder of SEEDS, adds. “In Assam, the construction of embankments and the replacement of fields, which have a higher water-holding capacity, with increasingly concretised settlements has created the perfect recipe for disaster.”

What is vernacular architecture?

Vernacular architecture is a type of construction characterised by its use of local materials, resources and traditions. It tends to meet needs and use methods that are specific to particular areas.

The situation may deteriorate further. A study published in November 2020 suggests that scientists’ predictions of destructive floods in the Brahmaputra basin might be off the mark by 24-38%.

“We analysed tree rings of centuries-old trees in the upper Brahmaputra basin to estimate rainfall patterns,” says Mukund P Rao, the study’s principal researcher and a postdoctoral research scientist at the Lamont-Doherty Earth Observatory, Columbia University. “Our research indicates that we’re in for an intensified monsoon through the 21st century.” Rao said that this, along with glacial melt accelerated by warming, will lead to greater flood hazard in the region than presently expected.

Coping with climate change, one stilt house at a time in Assam

While communities in the region can do little about the larger issues, they can take steps to deal with some things they have control over – like the houses they live in. Indigenous communities such as the Mising have traditionally lived in low-lying areas, and their houses have been adapted to deal with floods. Known as chang ghar, these are simple huts elevated on bamboo stilts with mud foundations – temporary structures that last about five years. More frequent flooding in parts of Assam has shortened how the length of time the houses last.

Pathuri, a local builder who works with bamboo, used to live in one such hut. “The frequent flooding exposed its mud foundations and caused its stilts to rot,” he says. “In the 2017 flood, like others in my neighbourhood, water came inside the hut and I had to relocate my family to a relief shelter by boat.”

“When we assessed the flood damage in 2017, we found that within a single district, some areas were flooding more than others,” says Sharma. Starting in September 2017, after the monsoon and flood, SEEDS worked with local builders to develop an improved chang ghar design that could be adapted to the terrain.

“We studied flood-level patterns of the construction site and elevated our chang ghar at least three feet above that,” Sharma explains.

With funds from Godrej Group, the Indian multinational conglomerate, and a local field partner, SEEDS trained local builders like Ratan Pathuri to construct 80 of these houses within the next year.

The houses rest on rubberised bamboo columns set in a concrete base. A flexible joinery system allows homeowners to raise the floor higher if necessary, while cross-bracing bamboo supports make the structure capable of withstanding movement caused by floods and earthquakes.

The buildings occupy a core area of about 23 square meters and follow the Sphere Handbook, a set of universal minimum standards in humanitarian responses.

“It has a toilet, unlike our old hut,” says Ratan Pathuri. “This makes life much easier during floods.”

Constructed with sturdy, locally available species of bamboo, each house costs about USD 760 to build with community participation. This is about 20% more than a traditional chang ghar. It takes about seven days to construct the main frame of the house.

Umananda Pathuri, who also lost his home in the 2017 flood, moved into his chang ghar 2.0 around the same time as Ratan Pathuri.

“My wife, four-year-old and I live with my parents,” he says. “The new house has space for all of us.” In dry weather, they use the area under the hut to store looms, livestock and boats. In wet weather, the building’s elevation has so far ensured that the home remains dry.

Umananda says that in the past three years, around 10 other villagers have adopted the new design independently, having seen how much more flood-resilient it is.

Although SEEDS’ chang ghars 2.0 have withstood over seven floods since they were constructed, they are classified by the government as kutcha, or temporary. This classification is based on whether “The walls and/or roof… are made of material… such as un-burnt bricks, bamboos, mud, grass, reeds, thatch, loosely packed stones.”

Kutcha houses have a lower social cachet than ’modern’ concrete houses. There is another challenge: since kutcha houses are deemed temporary homes, they cannot be easily used as collateral for bank loans.

In response, SEEDS and its donor partner PricewaterhouseCoopers India Foundation is building a model community relief shelter in Nikori village (in Golaghat district in Assam) with a further tweak.

“As this is a larger structure meant for the community, we’ve used the same bamboo superstructure design as before, but replaced bamboo stilts with reinforced concrete columns to give the building greater stability and load-bearing strength,” says Gupta. The new design has amenities like piped water and is replicable in other flood-prone geographies. “The concrete foundation and stilts can support a variety of superstructures in inexpensive local materials and traditional design aesthetic,” adds Gupta.

As climate change causes more extreme precipitation events, impacting some of the poorest geographies on the planet, inexpensive stilt houses offer a solution to make low-lying communities more resilient to its impacts.

Meanwhile, in Nikori, Umananda’s toddler plays in the veranda as the floodwaters recede. “This house is good,” he says. “I’m happy now.”